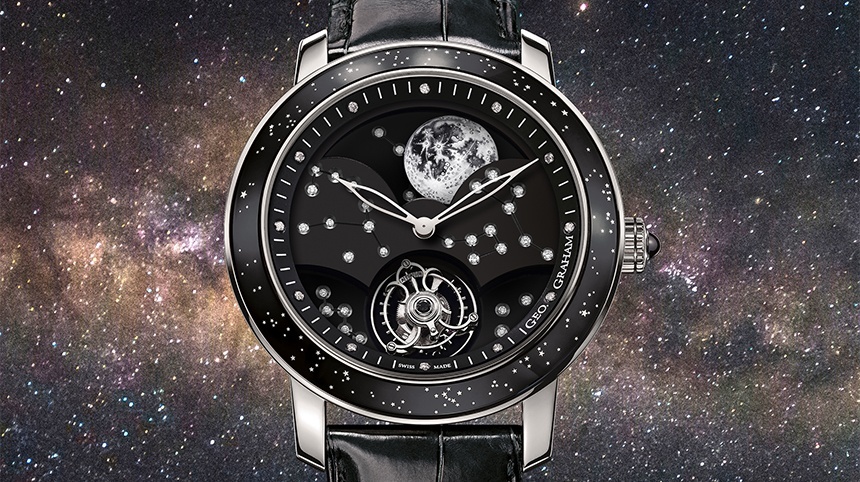 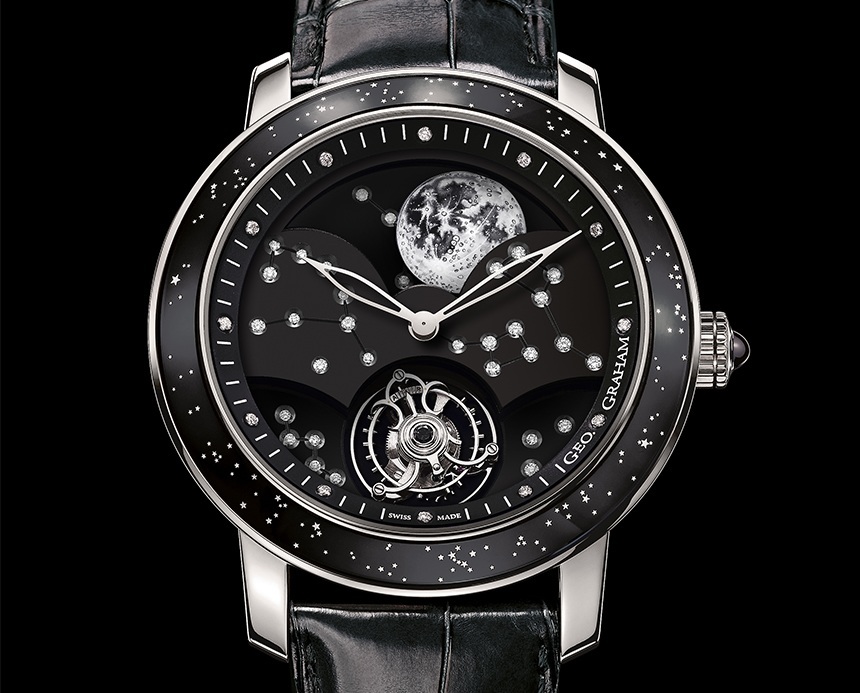 Graham has just announced a new version of its Moon Watch, which has an oversized moon phase indicator and flying tourbillon. It now comes in a 18k white gold case, with a black sapphire bezel and a black dial decorated with diamonds – all brought together in an effort to make the beautiful and gigantic Moon stand out on the dial even more.

Graham is a curious brand. And I think most people associate them with large and flashy sport watches, not to mention also their signature – and frankly humongous – crown protection system, as found on their Chronofighter and Prodive models. 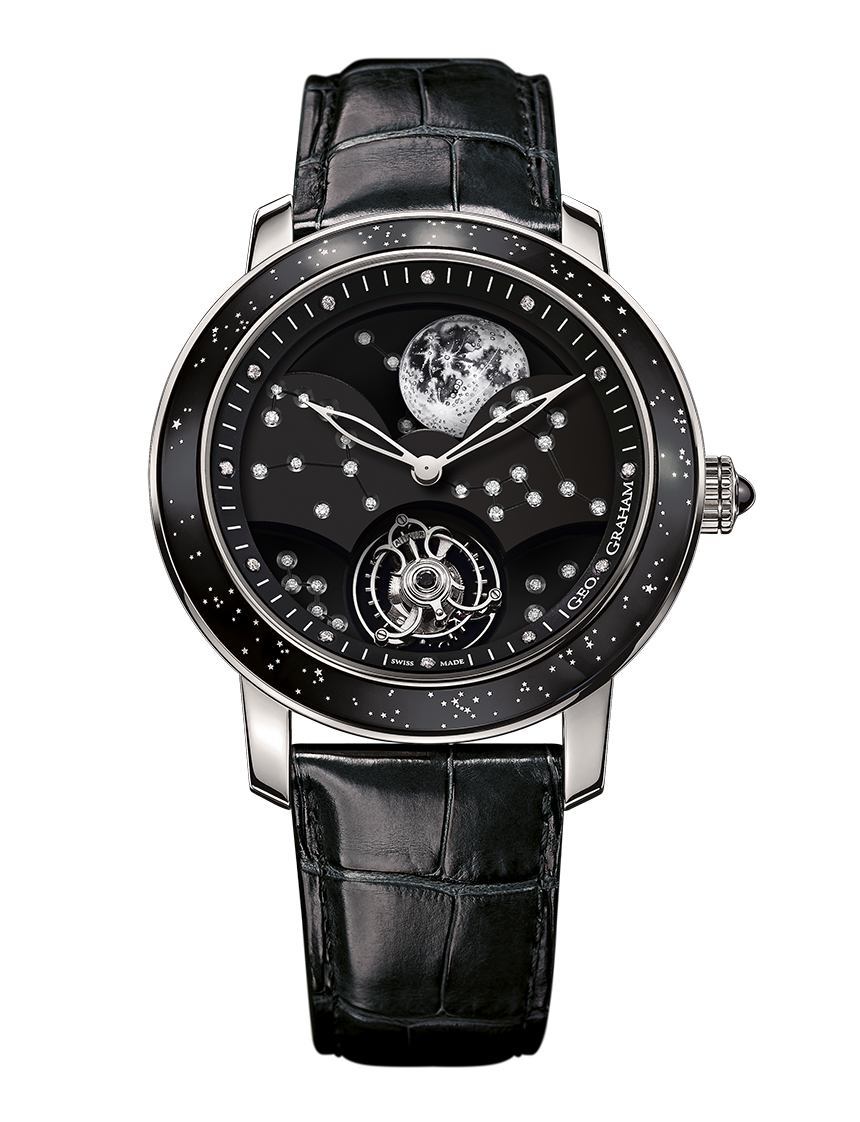 However, unknown to many, Graham also has a line of more classically styled watches, under their Geo.Graham collection. “Geo” actually has two meanings here. Firstly, Geo is short for George, or rather George Graham, the English watchmaker that the brand gets its name from. Secondly, Geo also refers to geology and that the watches in this collection are somewhat inspired by this subject – or rather astronomy, to be more precise.

Last year, I was pleasantly surprised by Graham’s Tourbillon Orrery watch. It featured a Christophe Claret-developed movement that has a tourbillon, but more importantly, shows the movement of the Moon, Earth and Mars around the Sun, which I thought was very cool and almost romantic. 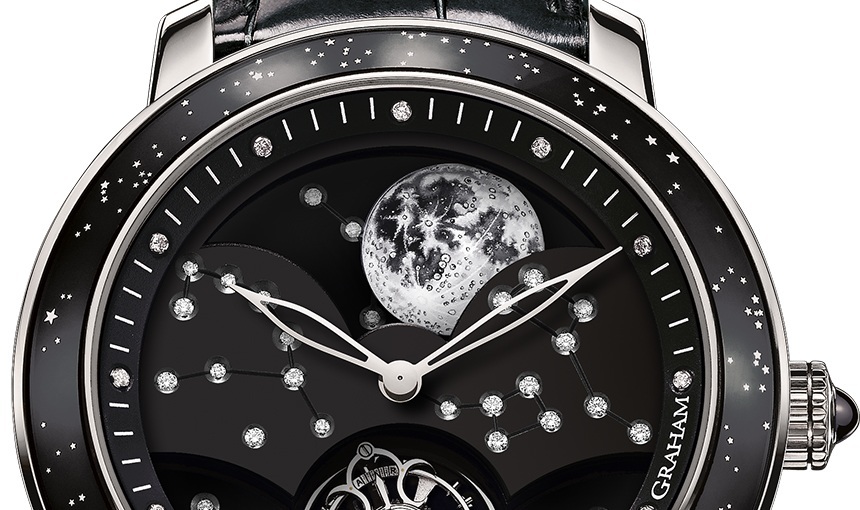 The Tourbillon Orrery is actually Graham’s second watch in this collection, the first being the Graham Geo.Graham The Moon. Not be confused with Omega’s Speedmaster Professional, the Graham Geo.Graham The Moon watch (debuted here) features a large retrograde moon phase display that is accurate to 122 years, as it closely follows the true moon cycle of 29 days, 12 hours, 44 minutes and 2.9 seconds – as opposed to the more common 29.5 days, found on simpler moon phase watches. Along with the unique display, the Graham Geo.Graham The Moon watch also features a flying tourbillon that makes a full rotation every 60 seconds and rotates on a ball bearing to substitute rolling for sliding friction. This watch was limited to just 10 pieces and featured an 18k pink gold case and blue dial. 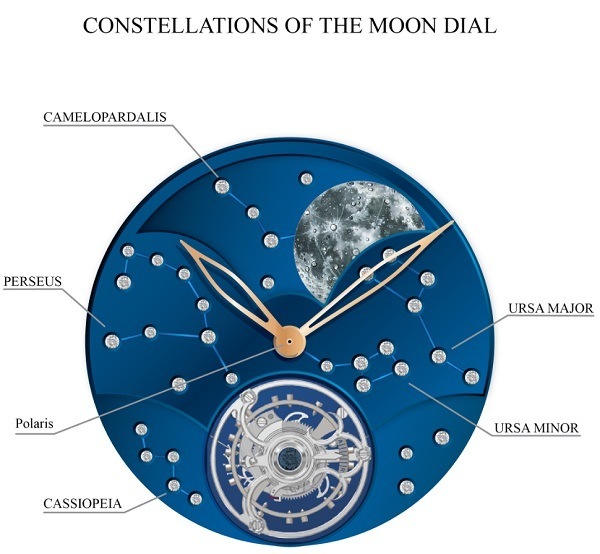 For this year, Graham is releasing a new variant of its Graham Geo.Graham The Moon Watch that is similar in all aspects, but has an 18k white gold case and black dial instead. It’s hard to choose between the two, but I think this new black dial variant captures the spirit of the moon more fully and I especially like how it contrasts against the diamonds that are set in the dial. In case you are wondering, these diamonds are not set about in random positions, but actually represent five major constellations – Camelopardalis, Perseus, Cassioepia, Ursa Major, and Ursa Minor, with the center of the dial representing the North Star. In all, there are 48 diamonds, with a total carat count of 0.24. To wrap it all up, this new Graham Geo.Graham The Moon Watch also has a black Milky Way sapphire painted bezel.

The new Graham Geo.Graham The Moon in white gold will come with a matching black crocodile strap and will be limited to just 8 pieces, and will be priced at $295,000. graham1695.com