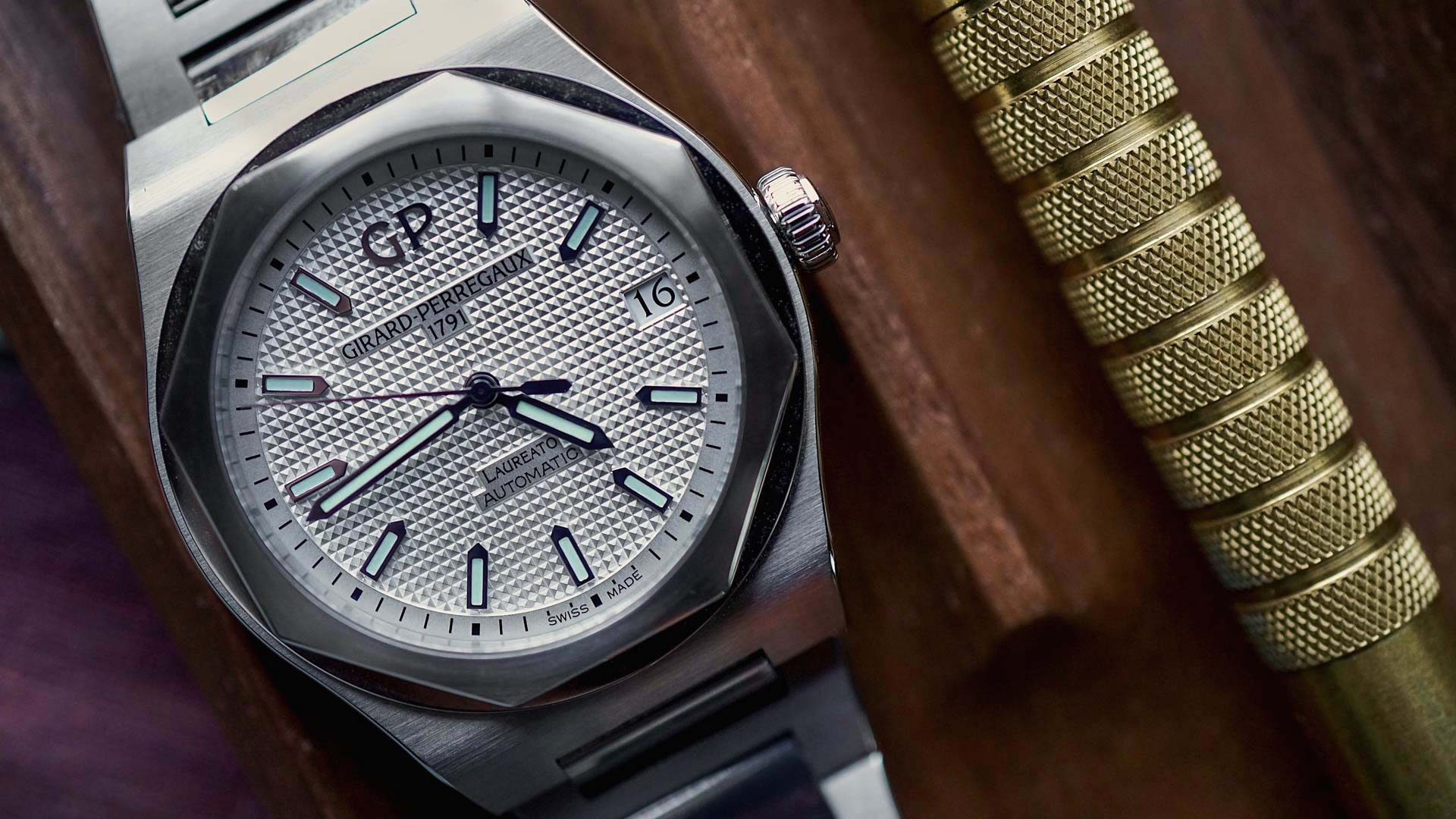 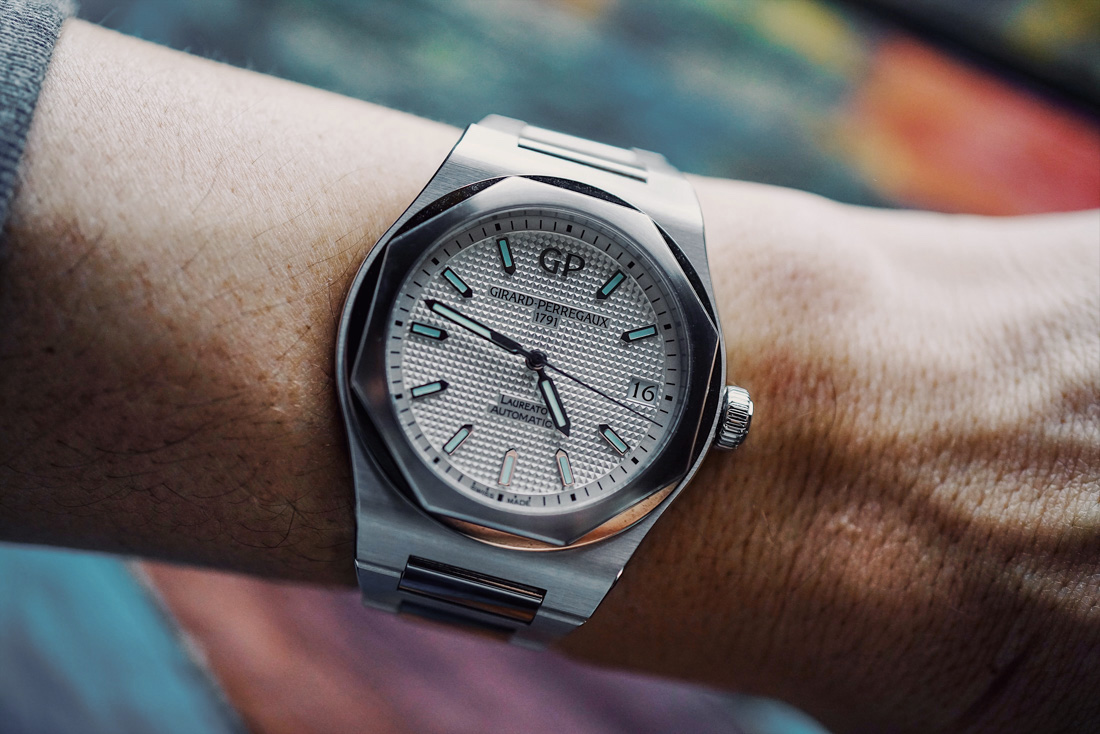 They say you should never meet your heroes. Understandable, as there are few things in this life that are immune to the crippling weight of our own expectations. Hero-worship with inanimate objects as it may be, is particularly dangerous, as you’re introducing an emotional response to dramatically varying personal subjectivities around design and value – a sure-fire recipe for inevitable disappointment. The Girard Perregaux Laureato doesn’t quite come with such a heavy legacy of expectation, but a different sort of baggage: as a controversial newcomer to the white-hot luxury sport watch category where it’s priced to compete against deeply entrenched heroes like the Patek Philippe Nautilus and the Royal Oak by Audemars Piguet. But does the Laureato hold its own? The answer, is at best, complex, and of course wildly subjective.

I remember gingerly slipping a Patek Philippe Nautilus 5711 on the wrist for the first time, with Gollum-like finality, but much to my surprise, the emotional response meeting this hero was a little less “my precious,” and a little more “that’s it?” Now, don’t get me wrong – there’s nothing wrong with the Nautilus – it’s a quirky, albeit wonderfully designed watch and a deserved icon that any of us should be so lucky to own. But like any justifiably loved icon, it comes with the weighty baggage of hype. It doesn’t help that it also comes with a a rumored multiple-year waiting list at some Patek ADs and a $23,000 price tag (assuming the AD is incorruptible enough to offer it at ‘just’ the MSRP) – a bubble that sets the tone for some extremely tall expectations indeed. 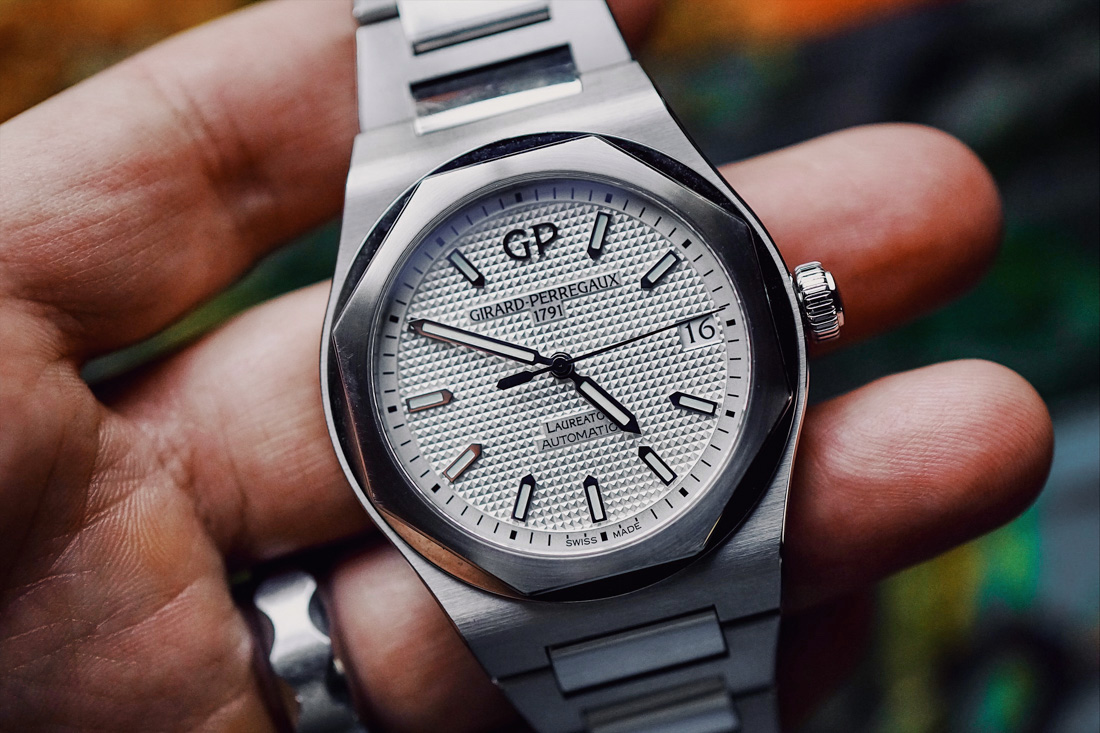 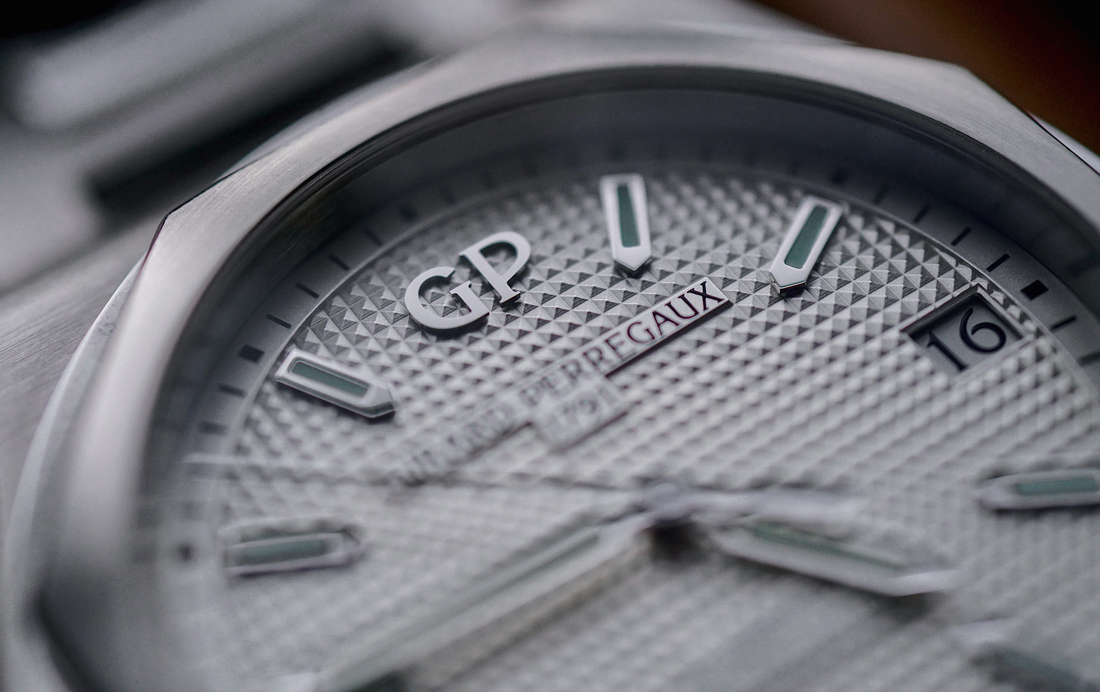 When it comes to modern dive, pilot, and dress watches, they all have their heroes and icons, while the luxury sport watch category for all intents and purposes, really only has the two aforementioned. Between these two, the runaway popularity and increasing scarcity of Patek’s iconic sport watch suggests several things – first, watch fans will always want what they can’t have. And second (and probably more importantly), there’s still not enough competition in this compelling category. Thus, with plenty of seats left at this fast-growing table, we felt compelled to take a closer look at one of those seats freshly occupied by the Girard Perregaux Laureato – a watch which has faced plenty of justifiable criticism simply for showing up. 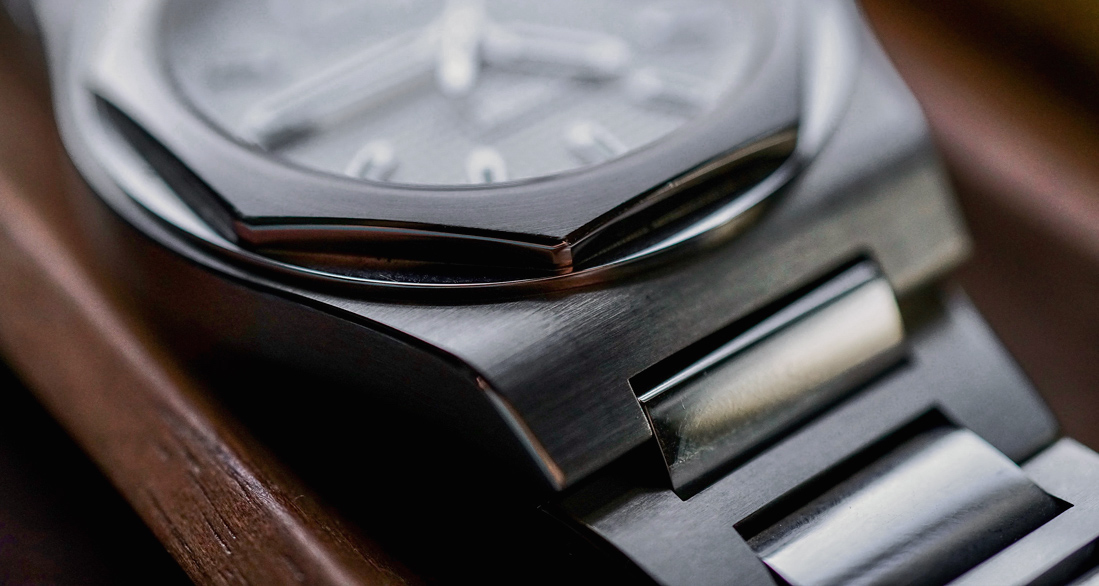 Now, the easiest thing with the Laureato would be to simply judge it entirely on the basis of its design (essentially renders on a screen, if you’ve never tried it on), and be done with it. Yes, at first glance, the general bezel shape, textured dial, integrated bracelet, and baffling price point absolutely evoke the Royal Oak, enough for some to disqualify this watch outright – again, on screen. But on wrist, a closer look at the Laureato reveals a decidedly elemental approach, with softer, rounded surfaces smoothly transitioning into more angular ones. Like how the bezel’s subtly rounded top profile perfectly matches the curved grade of the domed crystal, both of which are camouflaged by the circular polished surround at the base of the bezel, creating the illusion of a round bezel at certain angles. Or how the dial texture is much less defined – like an ultra-magnified patch of leather in the form of the traditional “clous de paris” hobnail motif that looks nothing like the oversized “tapisserie” peaks and valleys found on the Royal Oak. These aren’t the only elements that lend the Laureato a distinctly organic design language that’s missing from the sharp bevels, steep angles, and industrial contrasts of its closest competitor. 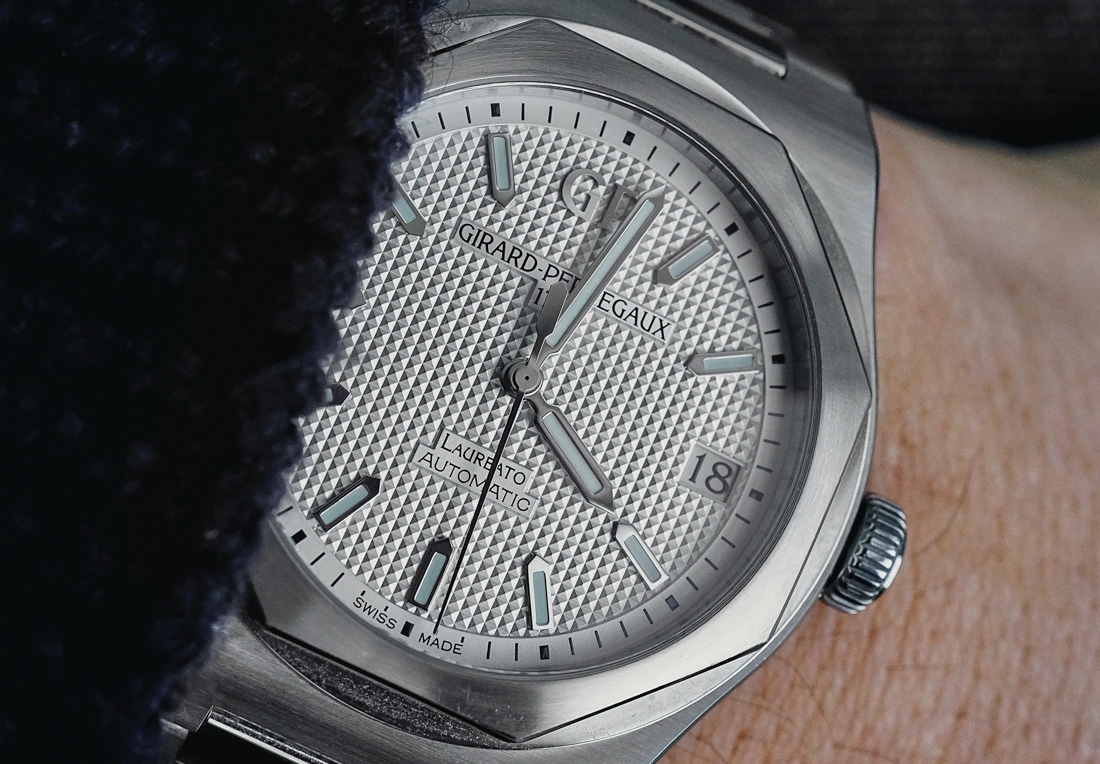 Now, it’s worth mentioning that said competitor does hold an international figurative trademark on the octagonal bezel, and has gone to legal lengths to protect this – most notably in 2014 when Audemars Piguet won a landmark case against Swiss Legend, who at the time, was producing a series of watches which featured a flat, octagonal bezel set into the case with eight exposed screws. A blatant infringement for sure, but still light years away from the Laureato on my wrist, whose eight-sided bezel owes about as much to the Royal Oak as the Submariner’s bezel owes to the Fifty Fathoms. 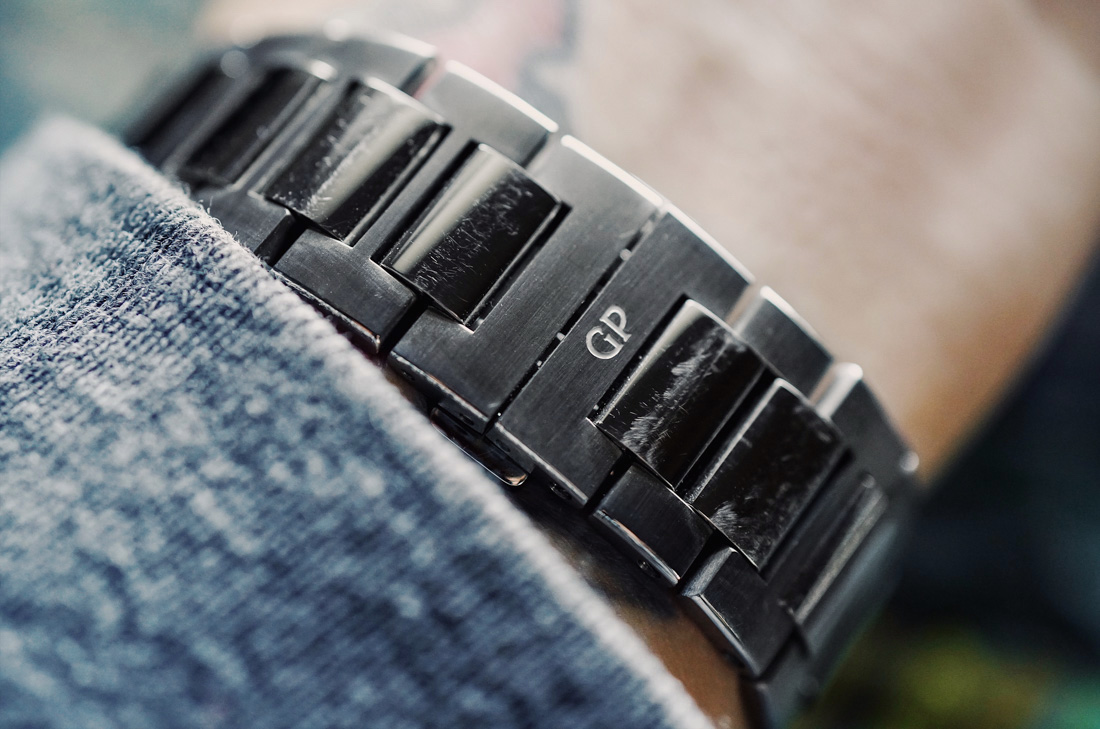 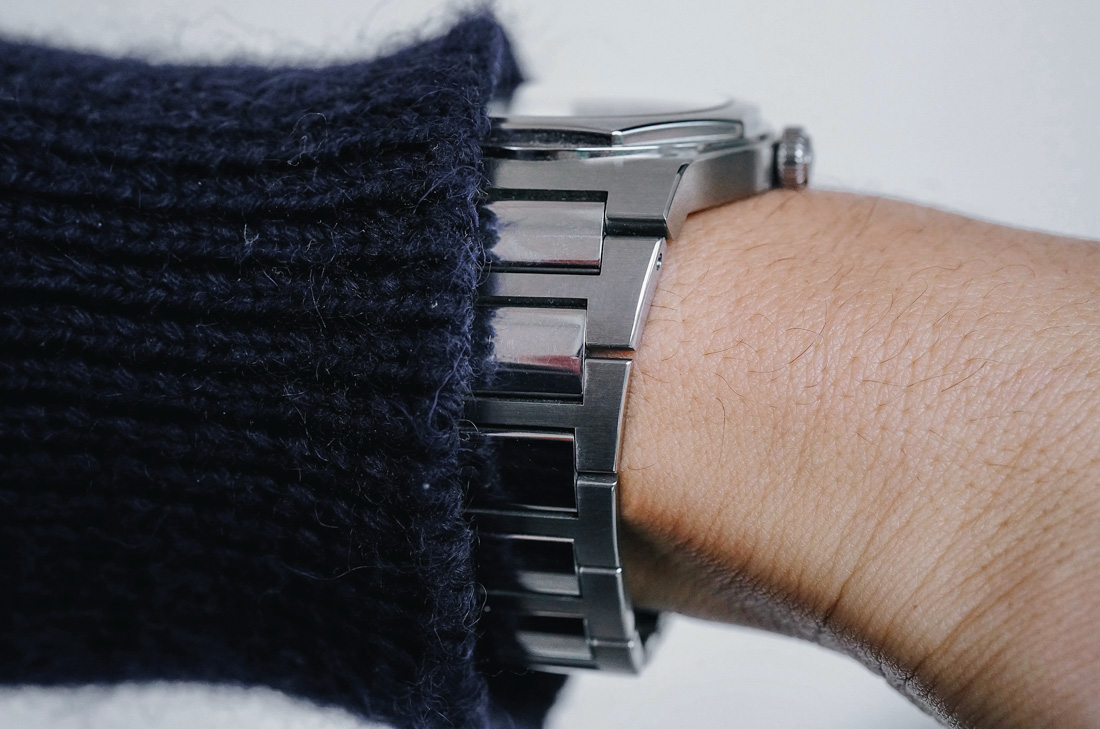 The case of the Laureato is confidence-inspiring and luxuriously thin, and full of very subtly excellent details, like a slim, polished edge that runs the continuous upper length of the case sides and bracelet, nicely contrasting the above polished surface beneath the bezel. On the wrist, the build quality of the machined case and bracelet is even more evident – thanks to its solid links and screwed pins. An extreme taper from the case to the clasp adds a subtle degree of elegance, but unfortunately, the clasp gets the short end of the stick here, as its short width and relative thinness doesn’t have as satisfying a closure as I’d want in this category. 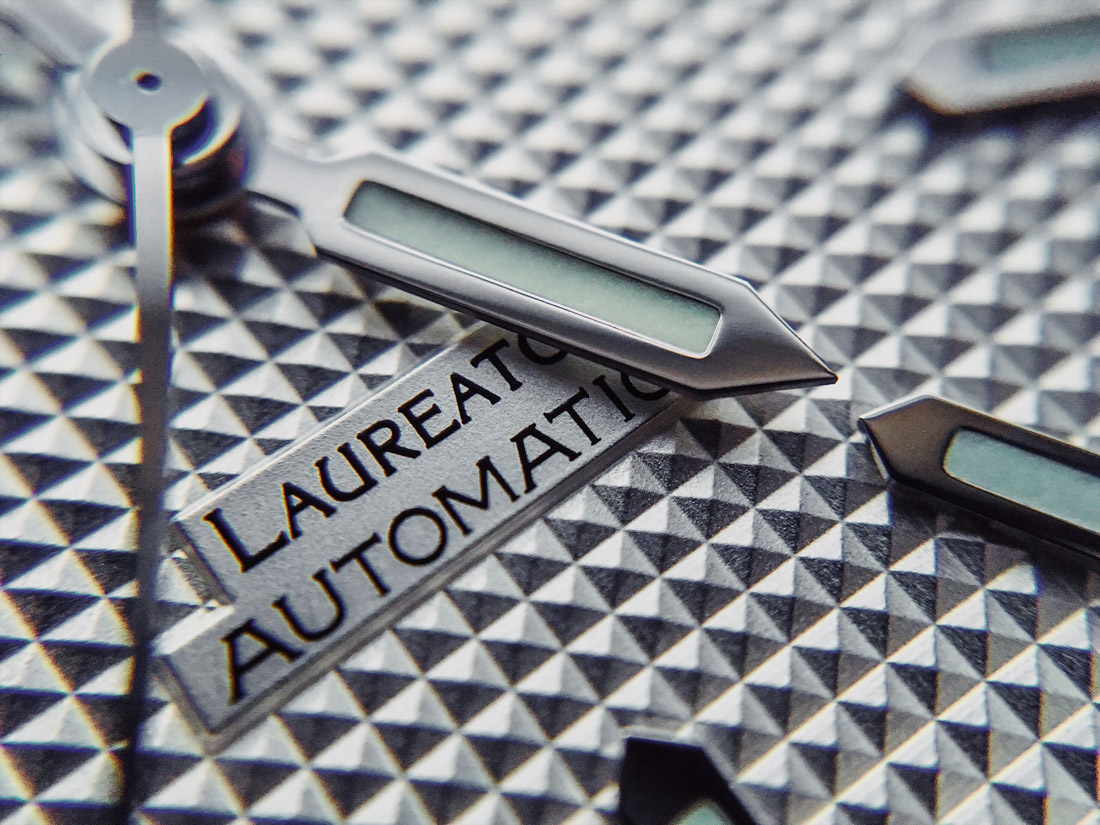 At this juncture, it bears repeating that the source material for the modern Laureato was introduced in 1975 – a year before the Nautilus, but three years after the Royal Oak in an era when many watch brands were simultaneously experimenting with innovative new case shapes, bezel designs, and dial textures. The version on my wrist maintains that funky ’70s spirit, but it’s been thoughtfully modernized and beautifully executed for an entirely new generation to enjoy (or in our case, to scrutinize and argue over). The pre-trademarked history of the octagonal bezel, combined with the unquestionably excellent build quality serve to remind that judgement without firsthand experience often lacks merit, and can suppress competition, ultimately doing nothing to enliven the space. And that’s honestly what I appreciate most about the Laureato – it feels like a genuine effort to add to the conversation and create competition – all of which, should be a boon to watch fans.