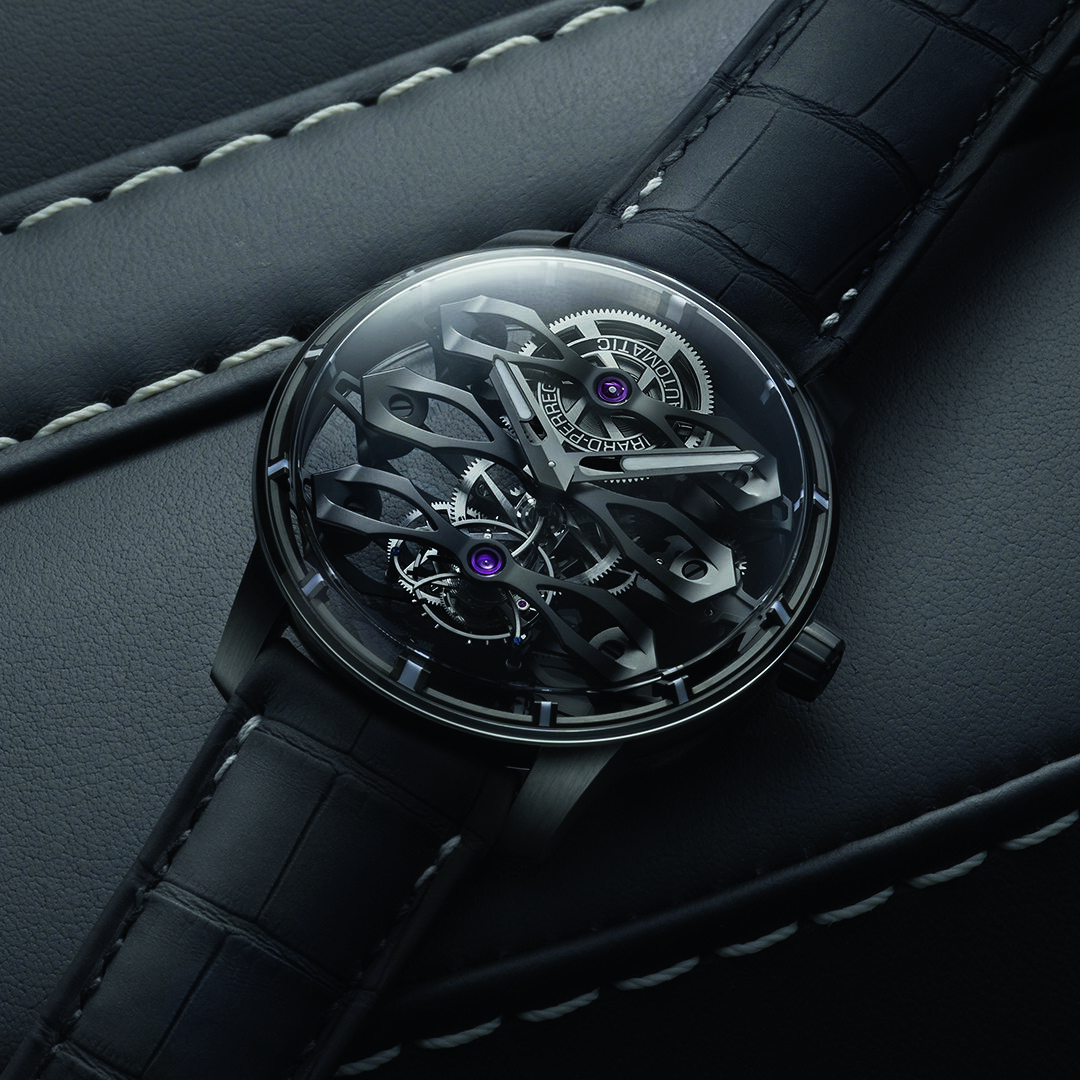 Girard-Perregaux has learned a few things about watchmaking in its 230 years of operation in the Swiss Jura Mountains. The Girard-Perregaux Tourbillon with Three Flying Bridges – Aston Martin Edition puts that vast experience in haute horology on full display, both literally and figuratively. In its first collaboration with British luxury car maker Aston Martin, the two brands marry their formidable expertise in craft, materials, and technology to produce an avant-garde timepiece that showcases the best of both brands. 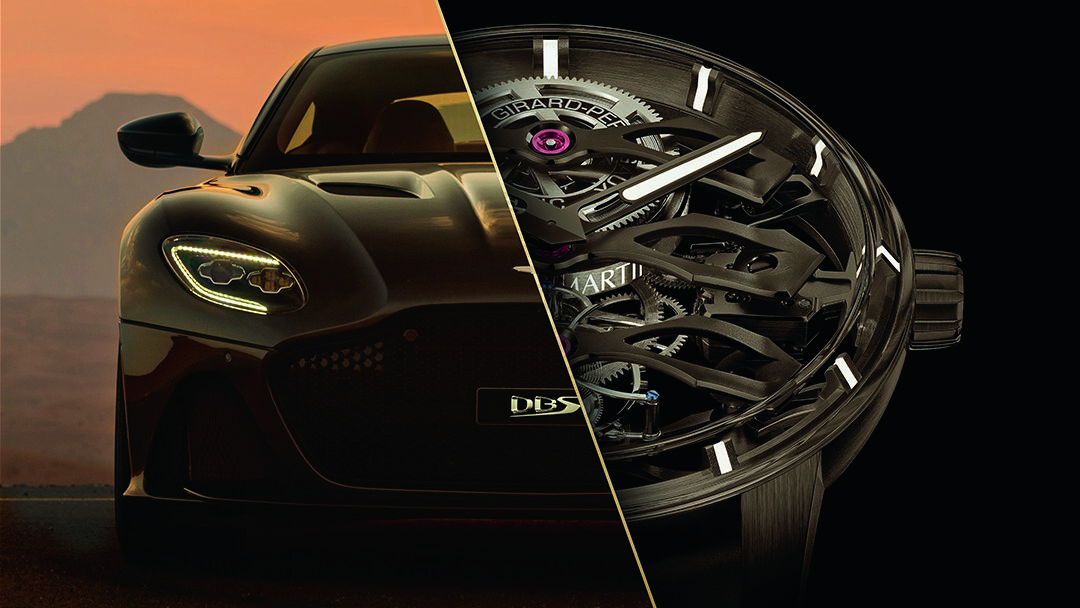 Housed in a 44mm case, Girard-Perregaux chose titanium for the case material, suffusing it with a black DLC coating to give the watch a stealthy look. Grade 5 titanium has an extremely high strength-to-weight ratio and is hypoallergenic, making it an excellent choice for a case material (as well as motorsports applications), but there was also a bit of romance involved in the choice of case material. Titanium was discovered in Cornwall by English clergyman William Gregor, in 1791 — the same year of Girard-Perregaux’s founding — a poetic choice for a collaboration between the Swiss and British brands. 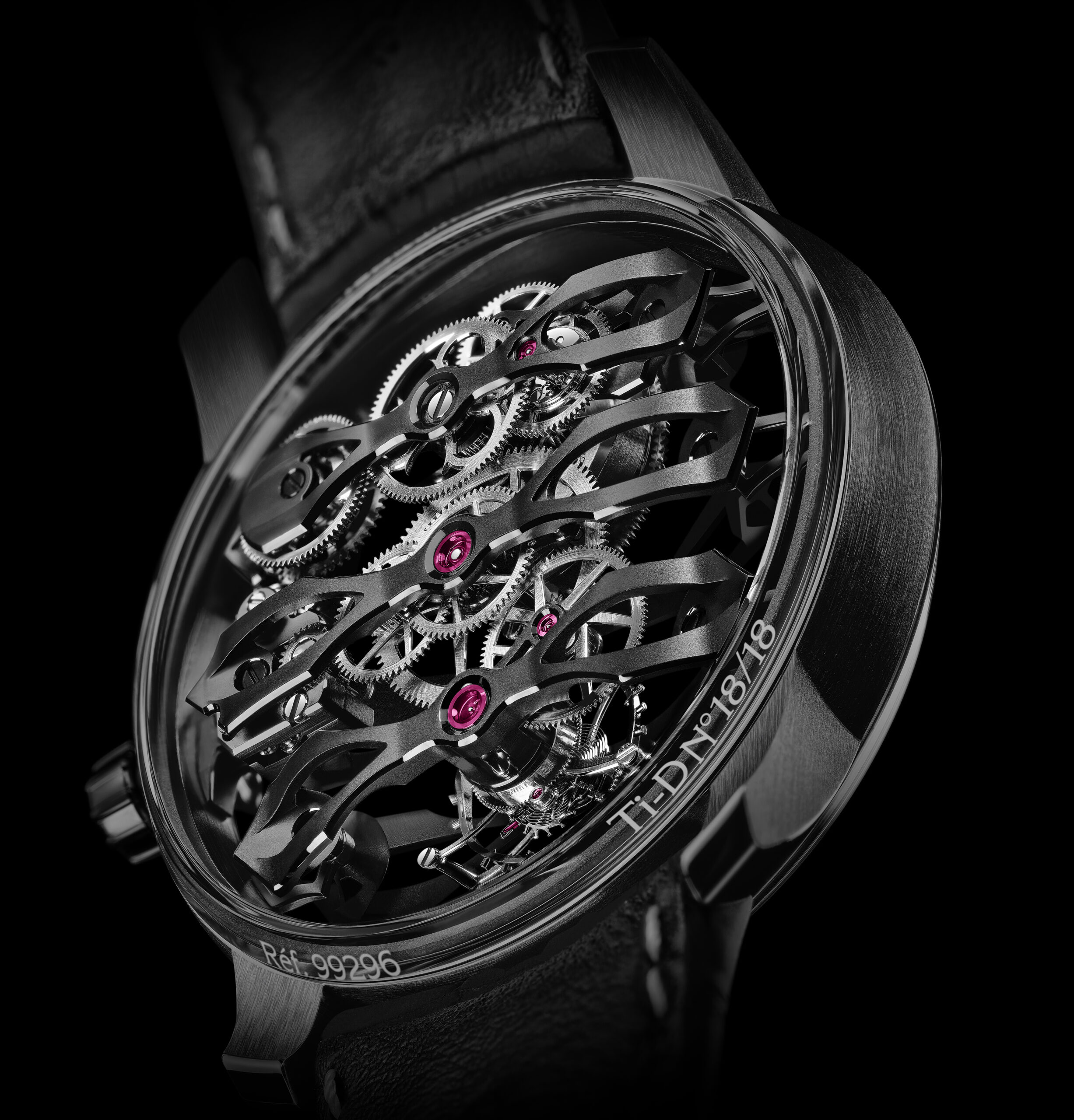 As the name promises, this new release prominently features three flying bridges — a clear extension of the brand’s philosophy of making the invisible visible. This newest release can trace its ancestry back to Girard-Perregaux’s Tourbillon with Three Gold Bridges created in the 1860s. This idea of taking a structural, technical element and transforming it to become integral to the aesthetic design of the watch is classic Girard-Perregaux. 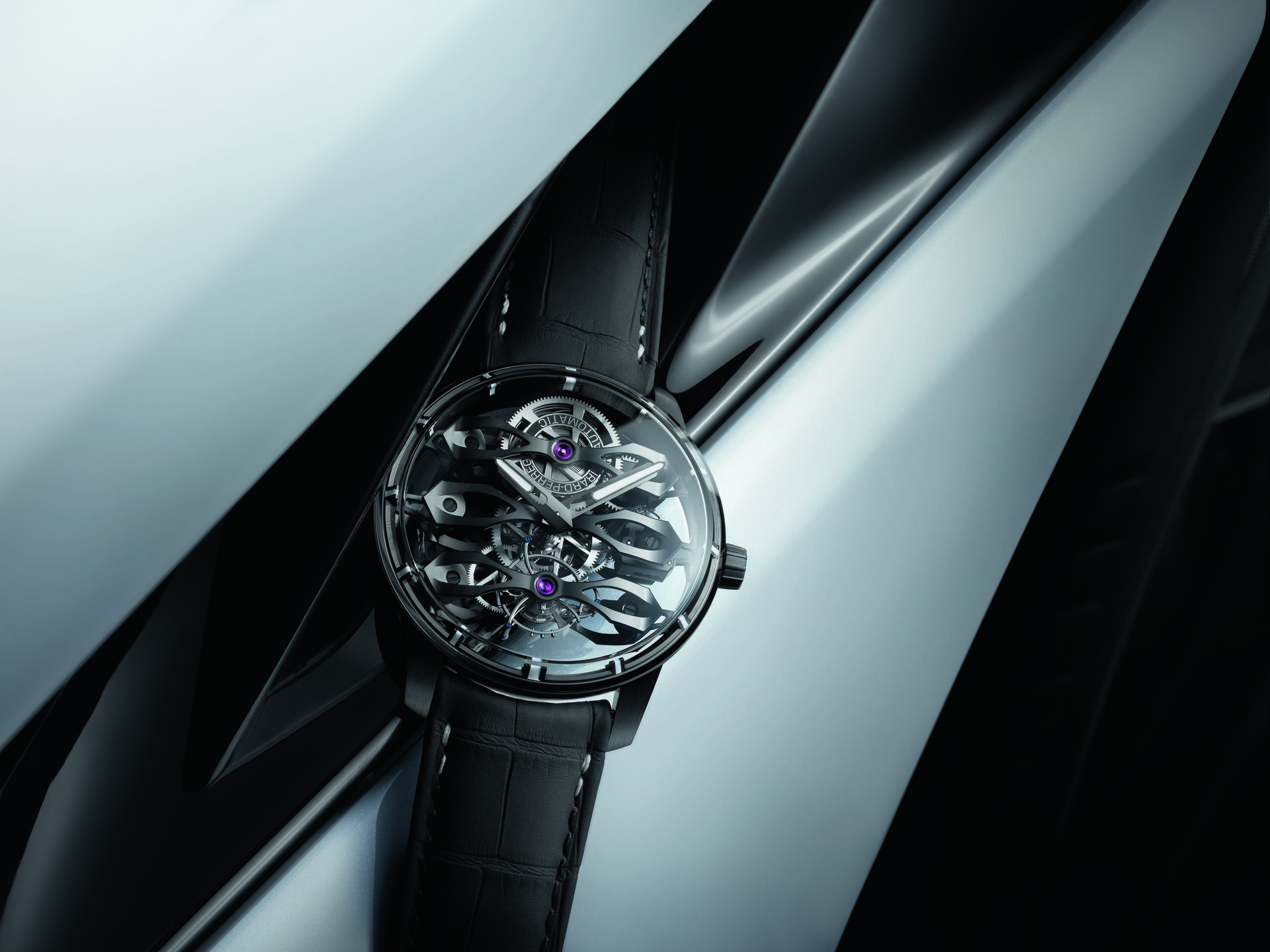 The dial of the Tourbillon with Three Flying Bridges appears to float, sandwiched between two sapphire crystals, the movement supported by the flying bridges and unimpeded by a solid mainplate. The bridges, crafted from DLC-coated titanium, add a structural complexity to the dial, with the shape and polished edges adding to the air of weightlessness. A white gold micro-rotor powers the automatic winding movement, and Aston Martin’s name is proudly engraved on the vertical flank and filled with luminescent material, glowing blue in low light. That blue lume can also be found on the hour and minute hands, adding a touch of practicality at night. A small seconds hand is affixed to the cage of the tourbillon — an element comprised of 79 components that measures in at only 10mm in diameter and weights a miniscule 0.25g, keeping energy consumption to a minimum. The Calibre GP09400-1683 placed on proud display via the three bridges is an automatic movement with tourbillon that beats at 21.6kbph, is crafted from 260 components with 27 jewels, and features a power reserve of 60 hours. 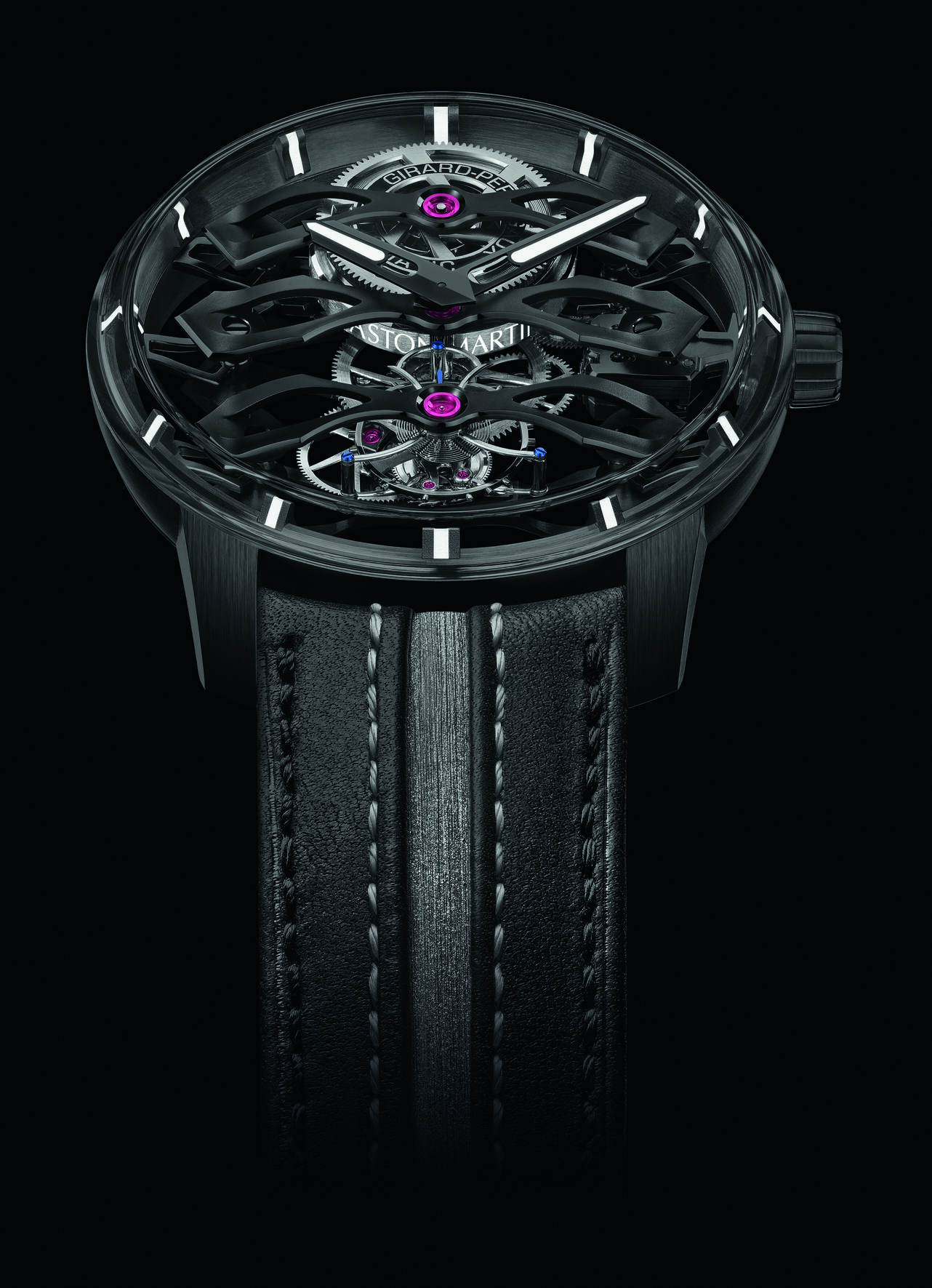 Ensuring that no element in the watch was overlooked, the Tourbillon with Three Flying Bridges – Aston Martin Edition is provided with two straps, each with a distinct look. First is an alligator strap with a rubber effect, equipped with a Grade 5 titanium deployant clasp with a black DLC treatment to match the case. Also included is a calf leather strap with a rubber alloy insert comprised of white gold injected into rubber — a newly created material that integrates seamlessly with the watch design. 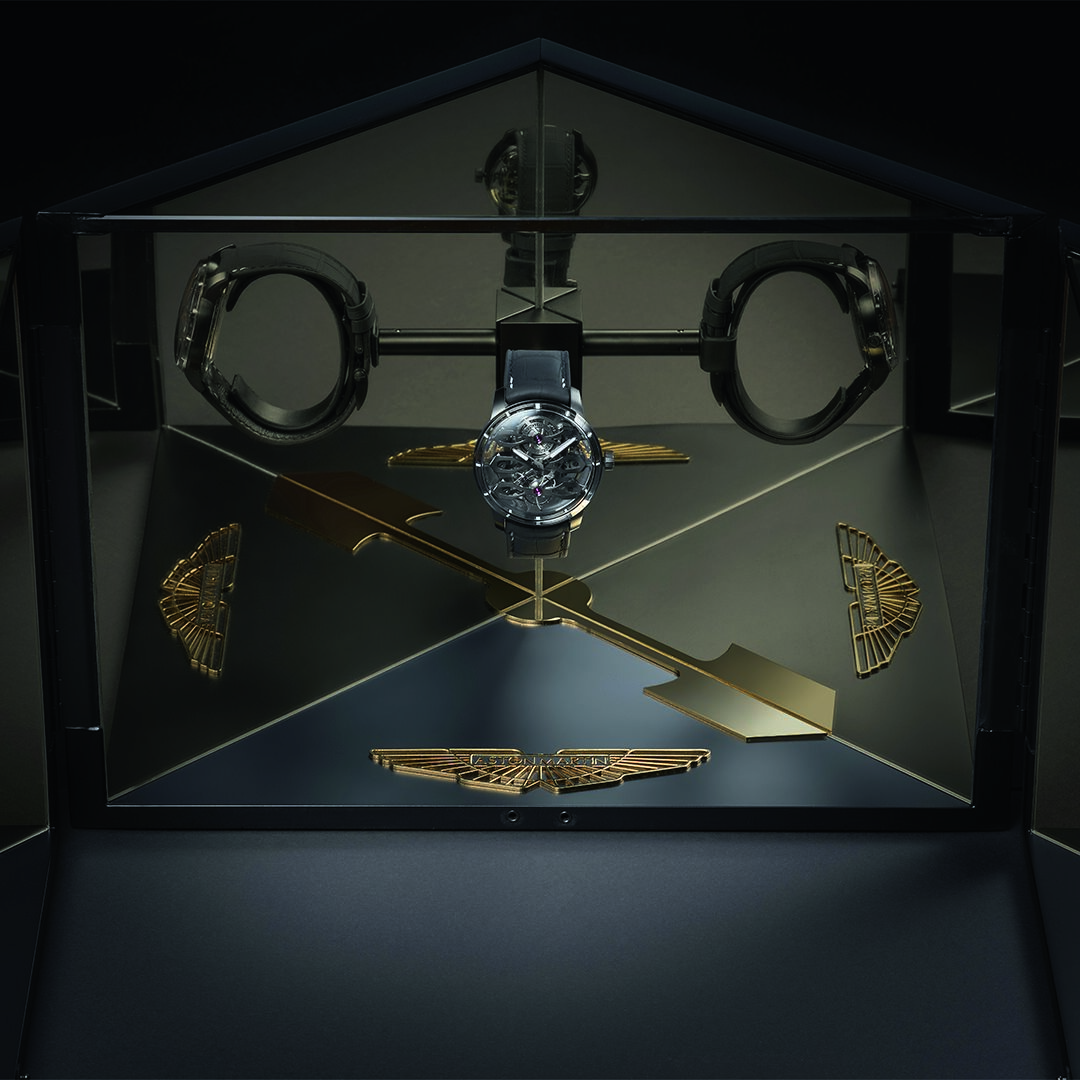 Creating a collaborative piece can be a challenge, ensuring that the design elements remain true to each brand’s core design philosophy. Indeed, Girard-Perregaux rarely ventures outside its own design team, especially when it comes to iconic models in the collection like the Three Bridges, but with Aston Martin’s keen eye for design, Girard-Perregaux couldn’t pass up the venture. As Patrick Pruniax, CEO of Girard-Perregaux, notes, “We are delighted to partner with Aston Martin, entrusting their team with arguably our most iconic timepiece, delivering a fresh perspective on Haute Horlogerie. Rarely do we work with others to re-interpret the Three Bridges; however, on this occasion, we have made an exception, mindful of Aston Martin’s prowess for design.” 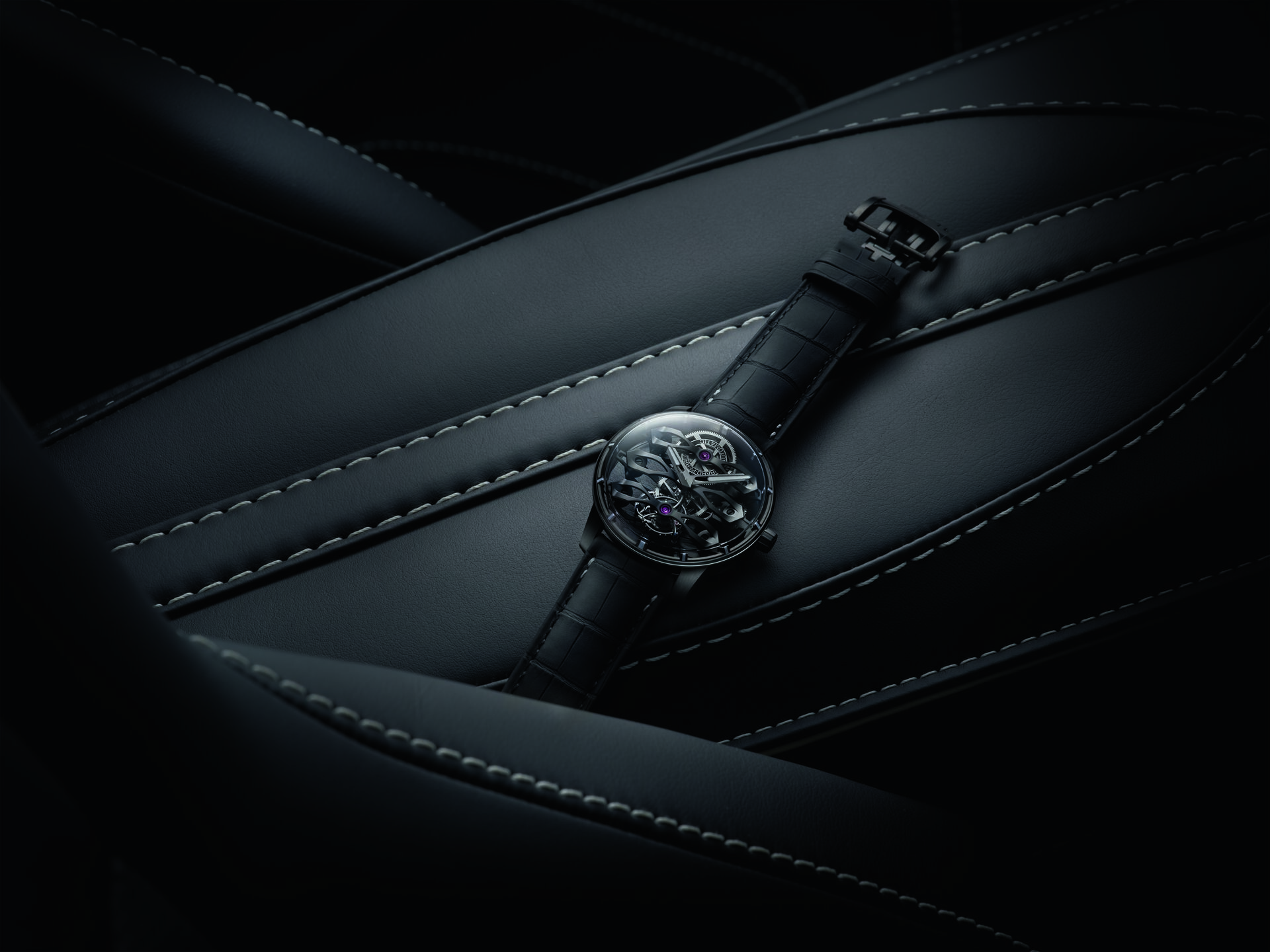 In designing the watch, the brands took inspiration from the distinctive elements in Aston Martin’s design, such as the distinctive front grille — a design element introduced in the late 1950s on the DB Mark III — and the scoops and side strakes on modern day models. Yet, the key was ensuring the design elements in this collaborative timepiece were true to the design ethos of both brands. Marek Reichman, Aston Martin’s Executive Vice President and Chief Creative Officer, noted, “The greatest challenge we faced with the design of this new timepiece was that of scale, as one can imagine. We had to consider lines and proportion on a far smaller measure than we are used to in the realm of automotive design. That said, good design is good design, so whether it is a watch or a car, the principles remain the same.” 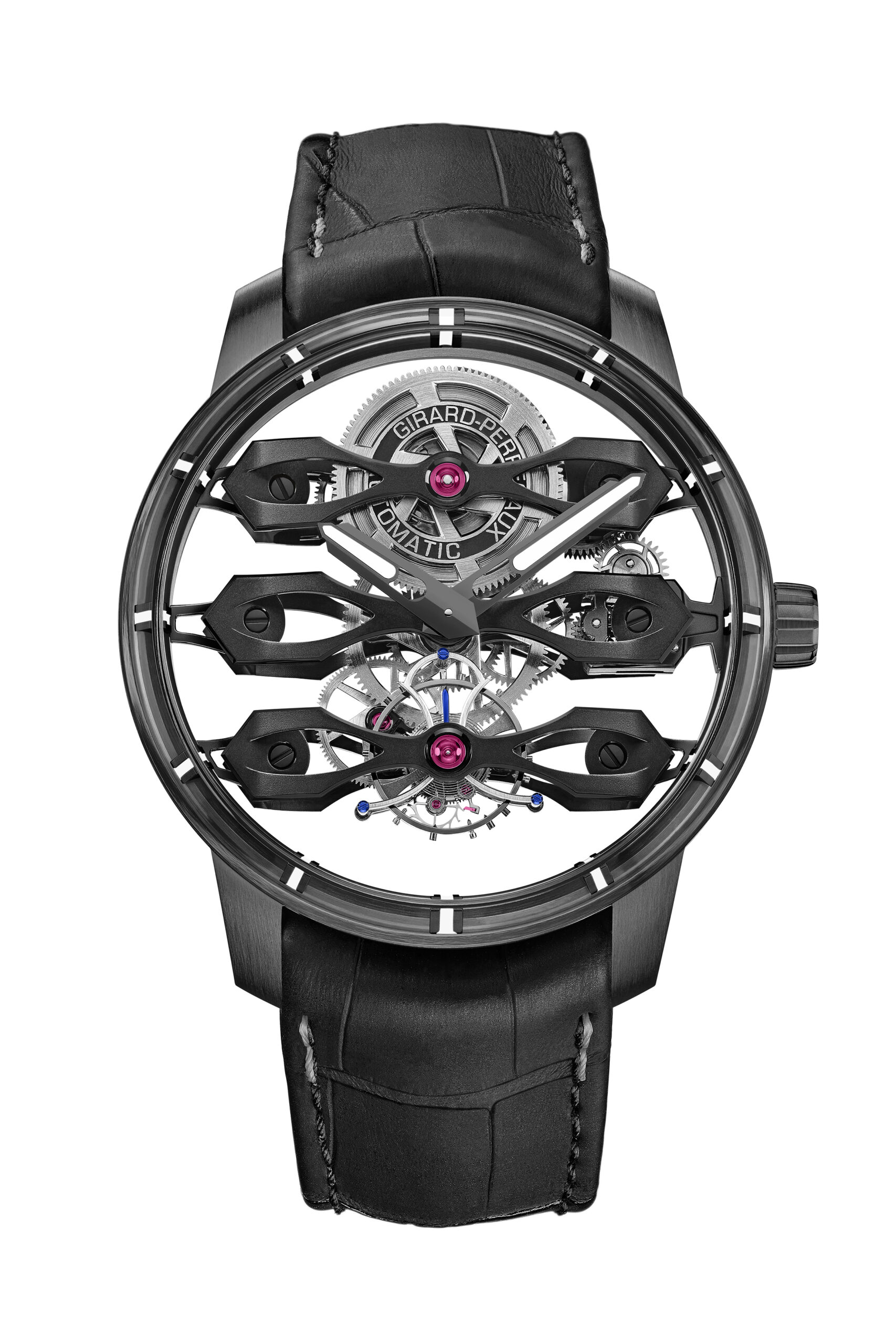 The Girard-Perregaux Tourbillon with Three Flying Bridges – Aston Martin Edition is limited to only 18 pieces at a price of CHF 129,100. For more information on this unique collaboration, be sure to visit the Girard-Perregaux website.