2020 marks the 100th anniversary of the invention of one of the most visually captivating and elegant watchmaking complications: the Flying Tourbillon. Conceived and first realized by Alfred Helwig, teacher and master watchmaker of the German Watchmaking School Glashütte from 1913 until 1954, the Flying Tourbillon is a genuine Saxon contribution to modern watchmaking. Up to this day, its history is intertwined with that of Glashütte Original. Let us celebrate the 100th anniversary with a look at some of the milestones that have come between 1920 and 2020 and see how the Flying Tourbillon enjoys the patronage of Glashütte Original. 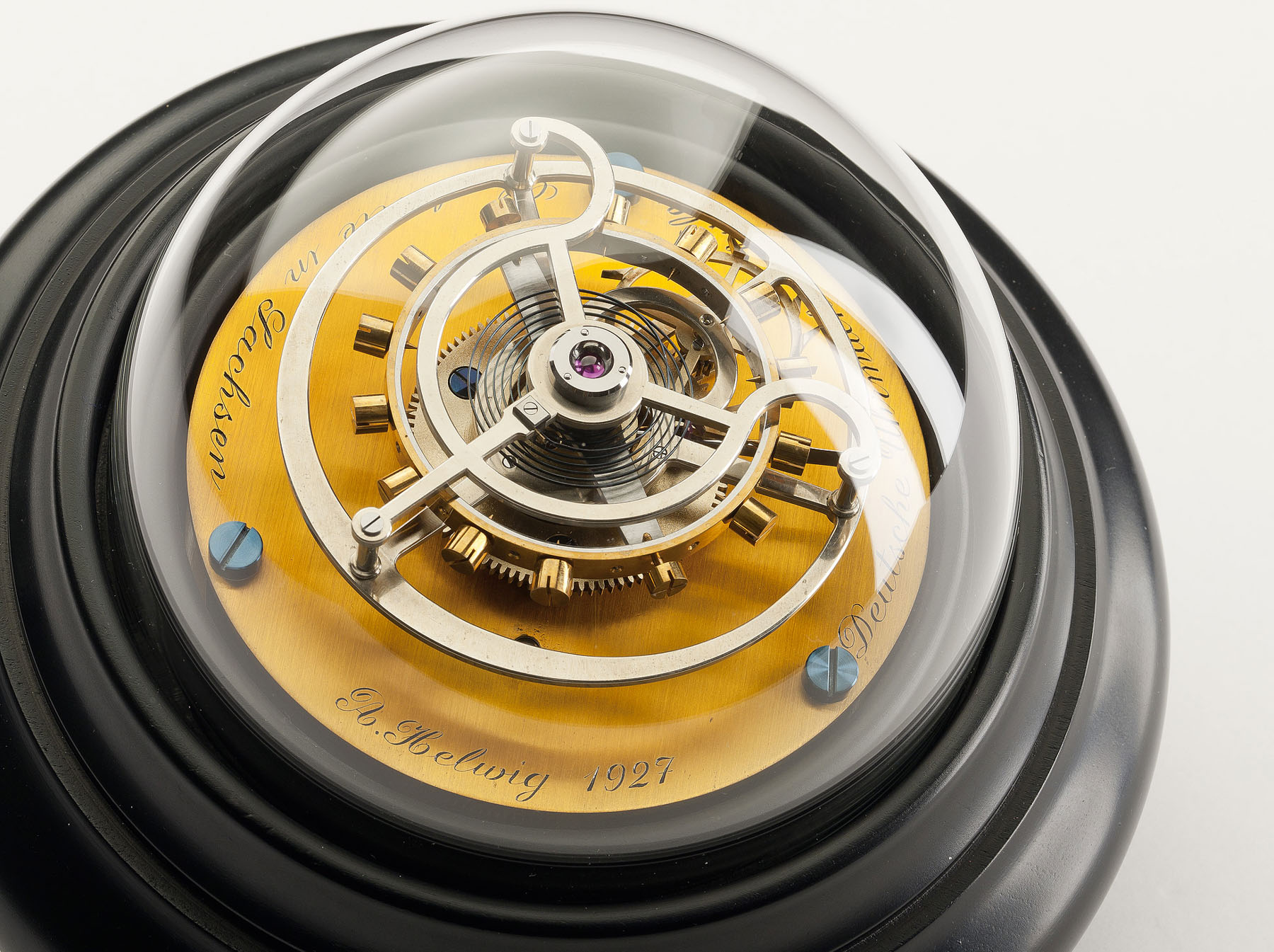 A “watchmaking 101” well-known by every watch lover and collector is the fact that the beating heart of mechanical wristwatches is the oscillation system with its balance wheel and hairspring, and the escapement system with its anchor and escapement. It includes a tiny brass wheel, with or without screws in its periphery, frantically, almost imperceptibly, swivelling around its axis some eight times a second. This frantic motion is what enthrallingly translates the intangible passing of time into something us humans can better understand. For this reason, this component has a special place in the heart of every watch enthusiast — and this also explains why the tourbillon, arguably the most beautiful presentation of the balance wheel, remains so incredibly popular today. 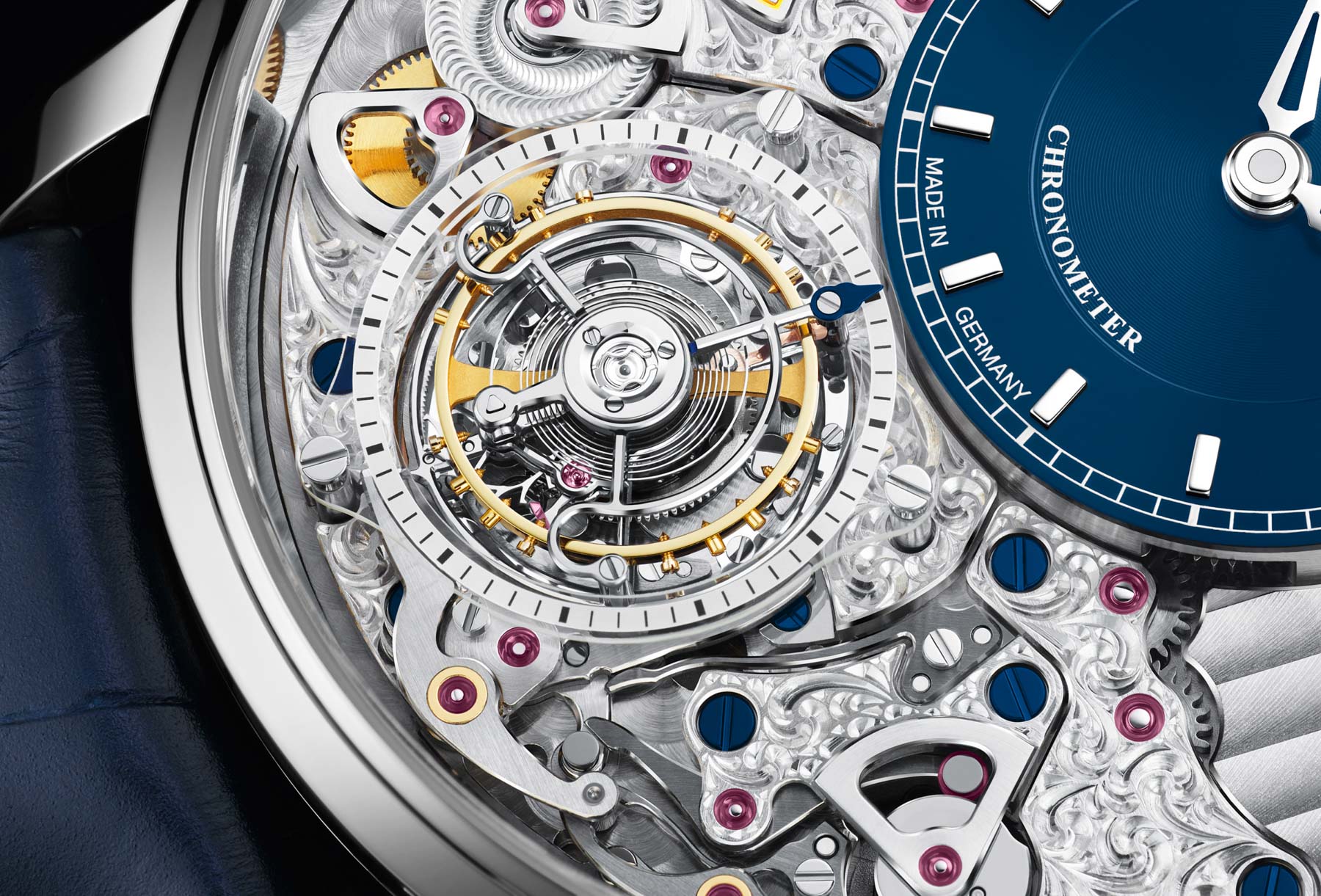 How so? For two reasons that are as easy to understand as they are difficult for watchmakers to realize: because a tourbillon is both a larger and optically slower display of the heart and soul of a mechanical watch that makes its appreciation that much easier. In truth, the tourbillon literally frames the oscillation and escapement system as though they were pieces of kinetic art by placing them in a beautifully finished cage that also moves in its own pace and own singular direction. 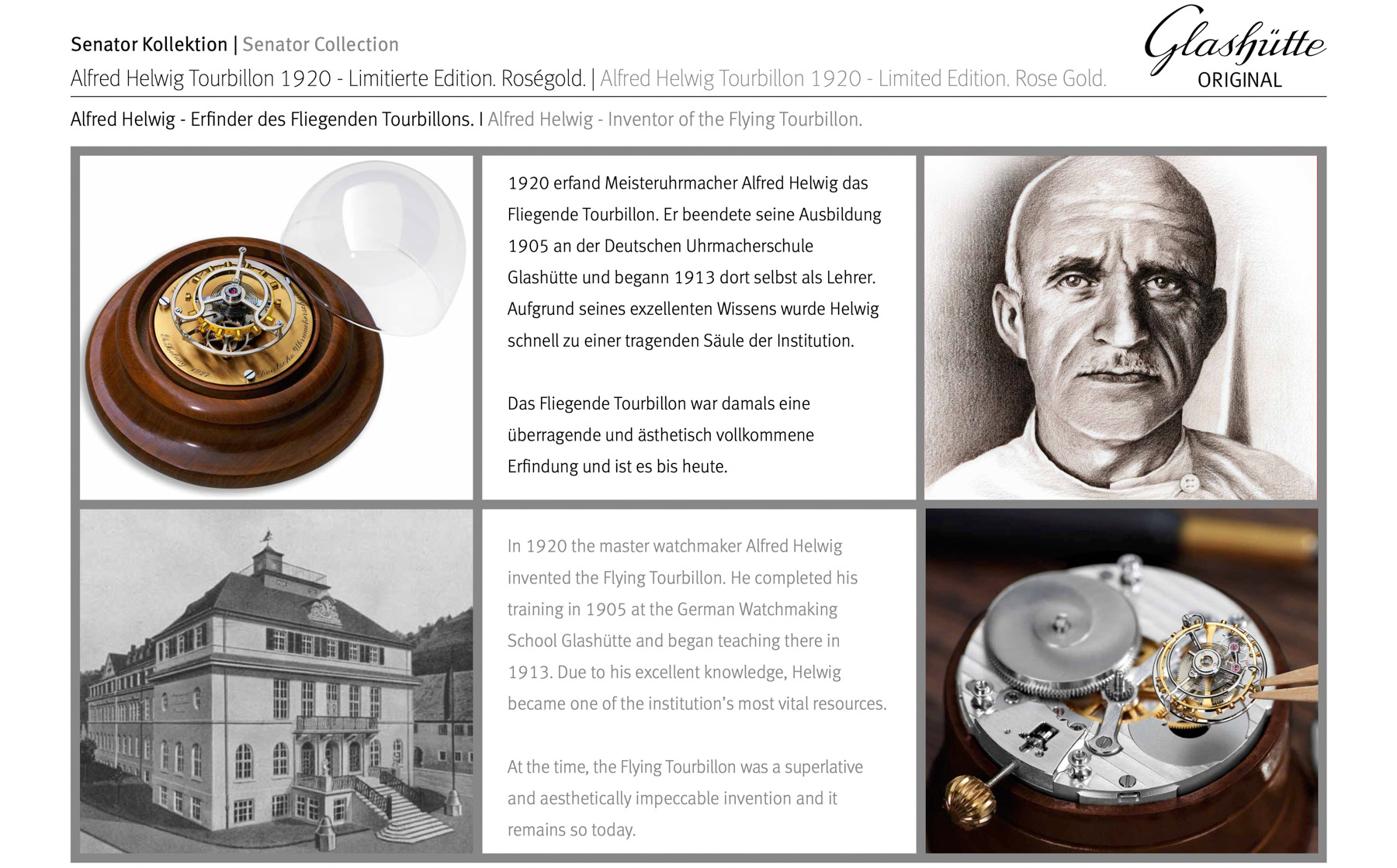 Alfred Helwig’s Flying Tourbillon is the ultimate manifestation of this concept in the sense that with his use of a cantilevered mounting and a delicate and light execution of the rotating cage, he succeeded in creating a tourbillon that offered an absolutely unobstructed view of its operation by eliminating the use of an upper bridge. The upper bridge had been an essential component of tourbillons from the late 1700s up until 1920 as it was deemed essential to secure the tourbillon assembly from above and below, equally. 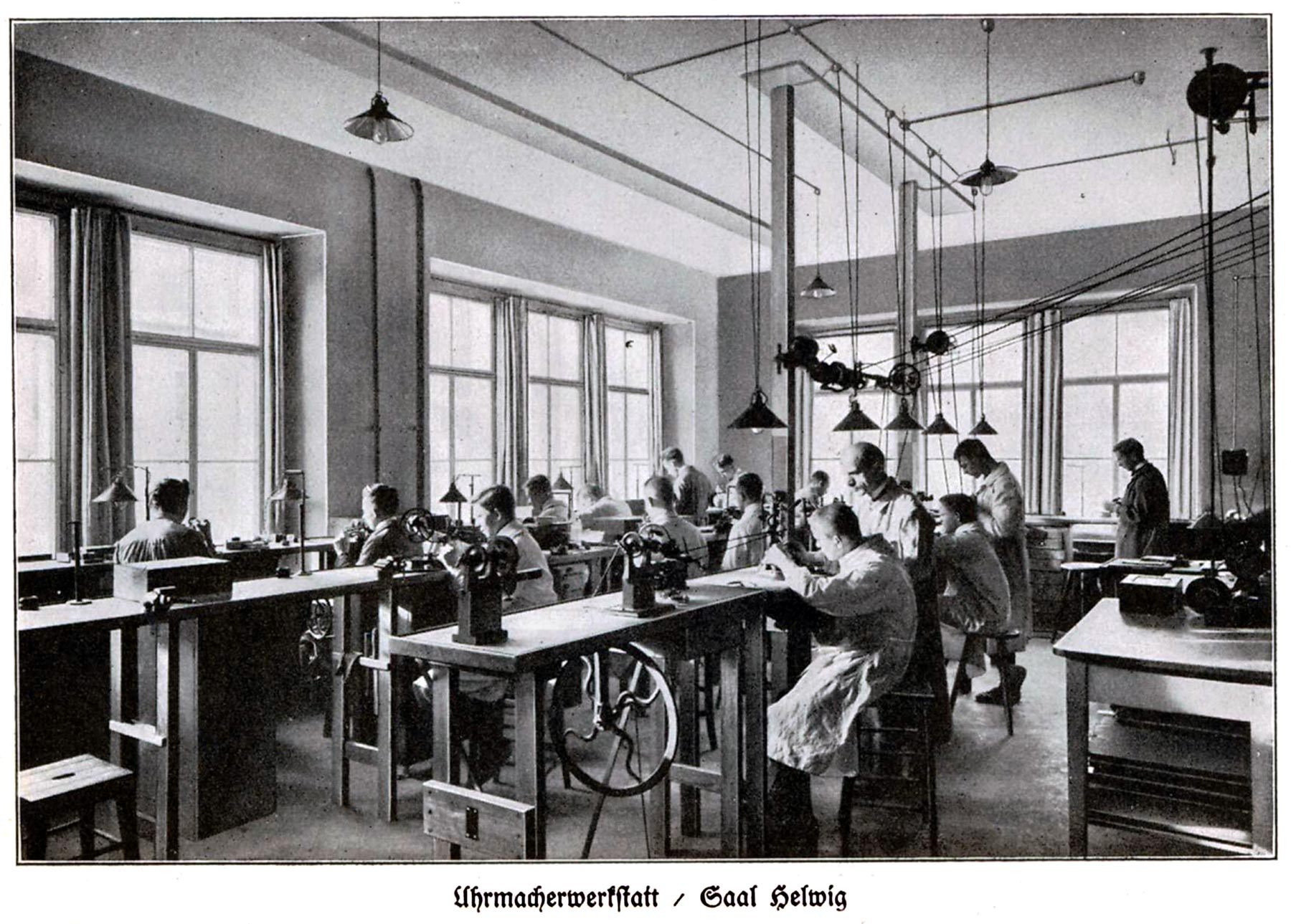 Always on the quest for achieving yet greater precision, together with his master students, Helwig turned increasingly to the development of a watch with a cantilevered tourbillon, which he referred to as a “rotating carriage watch.” He developed Breguet’s tourbillon further in an ingenious way by mounting it on one side only with two bearings placed in close proximity guiding the wheel shaft. This allowed the carriage and escapement to be mounted without an upper bridge, resulting in a clear view of the tourbillon, which hence appears to be flying inside the movement. 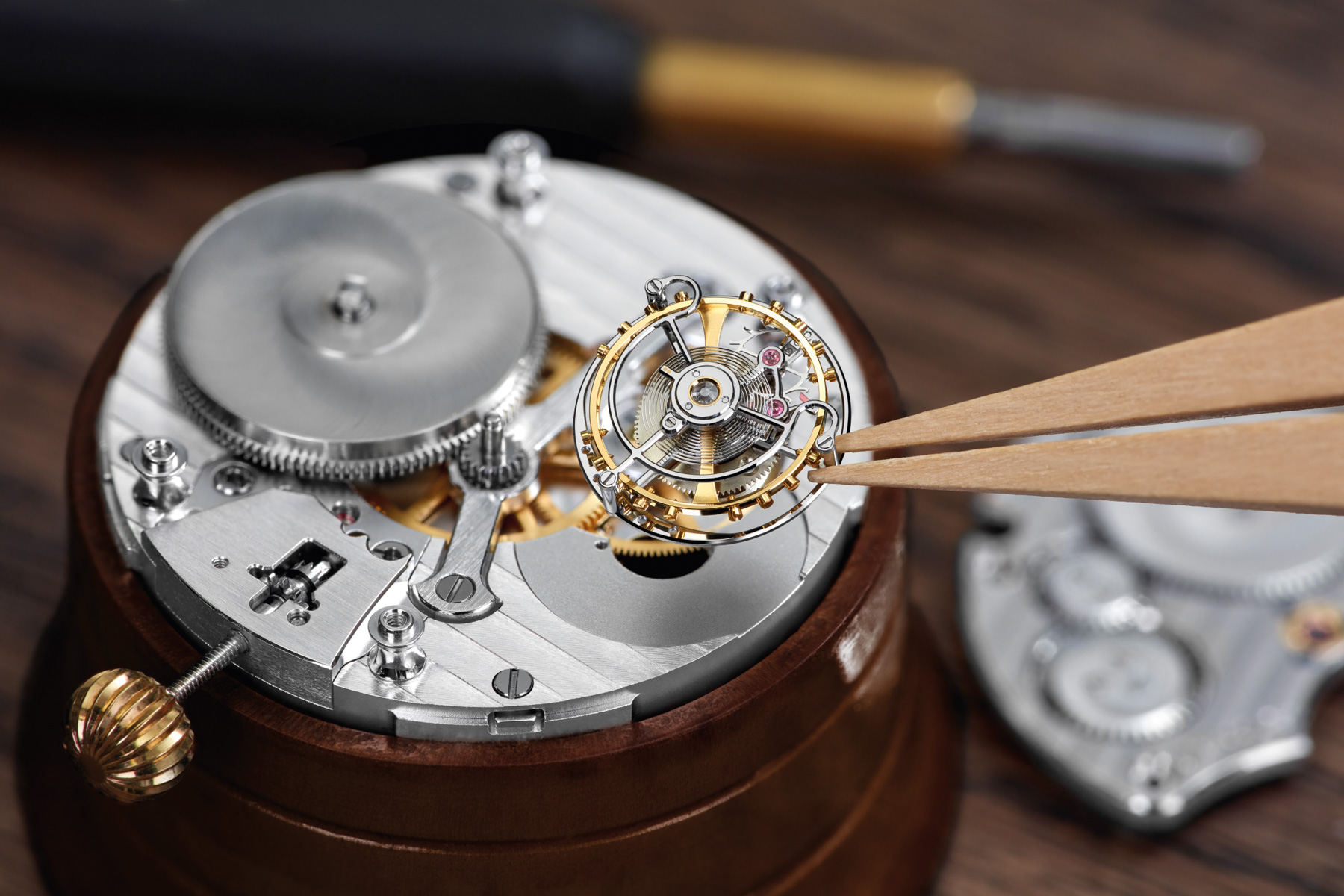 To build a Flying Tourbillon requires great skill and stamina, so much so that only a few of the most excellent watchmaking students are said to have dared attempt it, even under Helwig’s guidance. Even so, permission was first to be obtained from Alfred Helwig and the director of the Glashütte watchmaking school, Dr. Karl Giebel, as both men were to assess the skills of the students before it made sense for them to even begin the work. In the early 1920s, a total of 20 pocket watches with a Flying Tourbillon were made — it took around 18 months to complete a work of art of this magnitude and complexity. All 20 timepieces built under the guidance of Alfred Helwig were subsequently examined by the German Naval Observatory in Hamburg, the general testing center for precision watches, and they all achieved excellent test results. 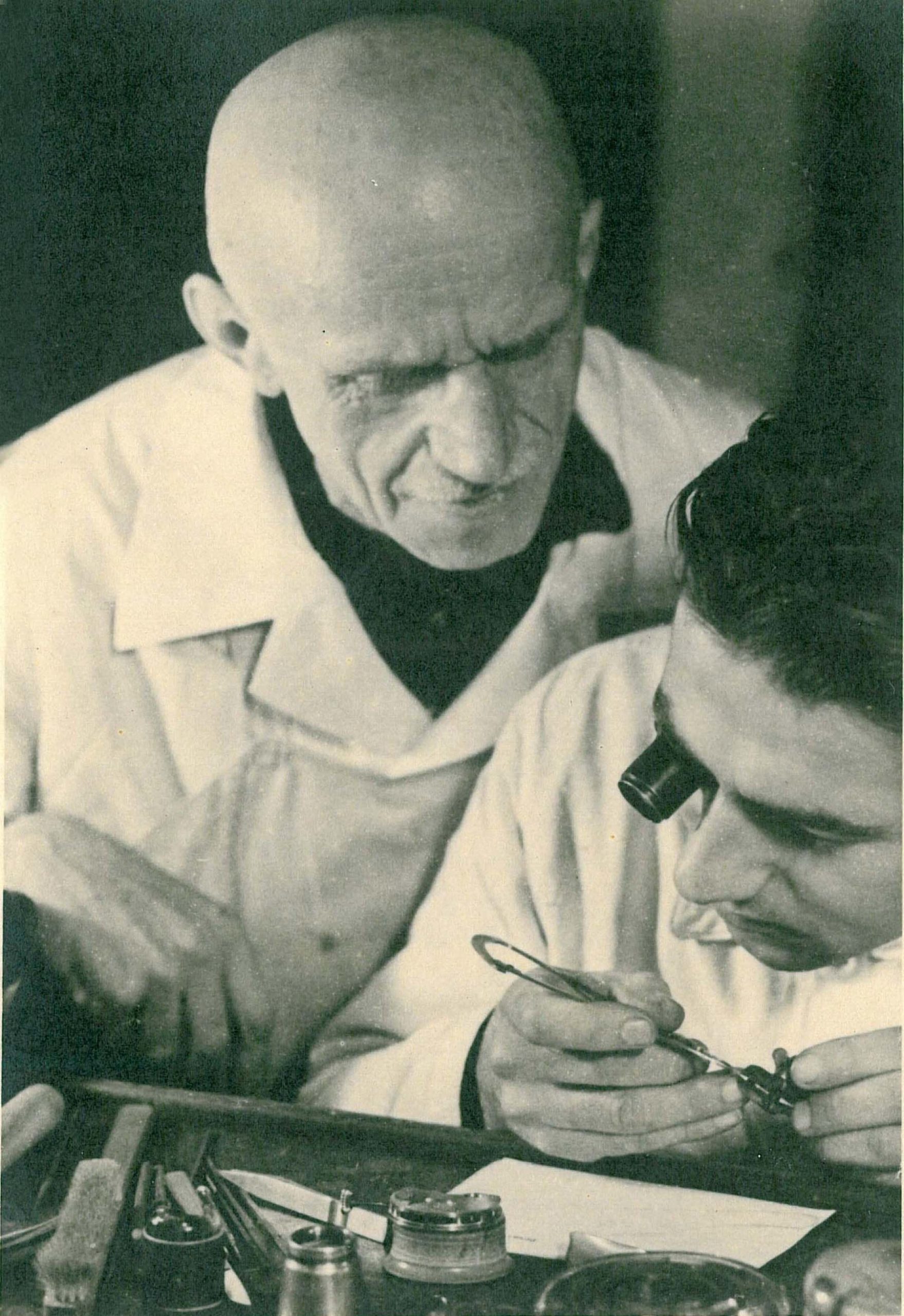 As a result of its cantilevered mounting the tourbillon carriage is relieved of pressure, making a very fine and delicate construction possible. Helwig’s design requires less material, is lighter, and thus less subject to inertia, placing less strain on the movement. With its hand-polished, exceptionally filigree execution, the rotating carriage and its gold chatons, jewels, and screws weigh less than half a gram. A marvel of engineering and horological prowess that so eloquently exemplifies the values of Saxon watchmaking. 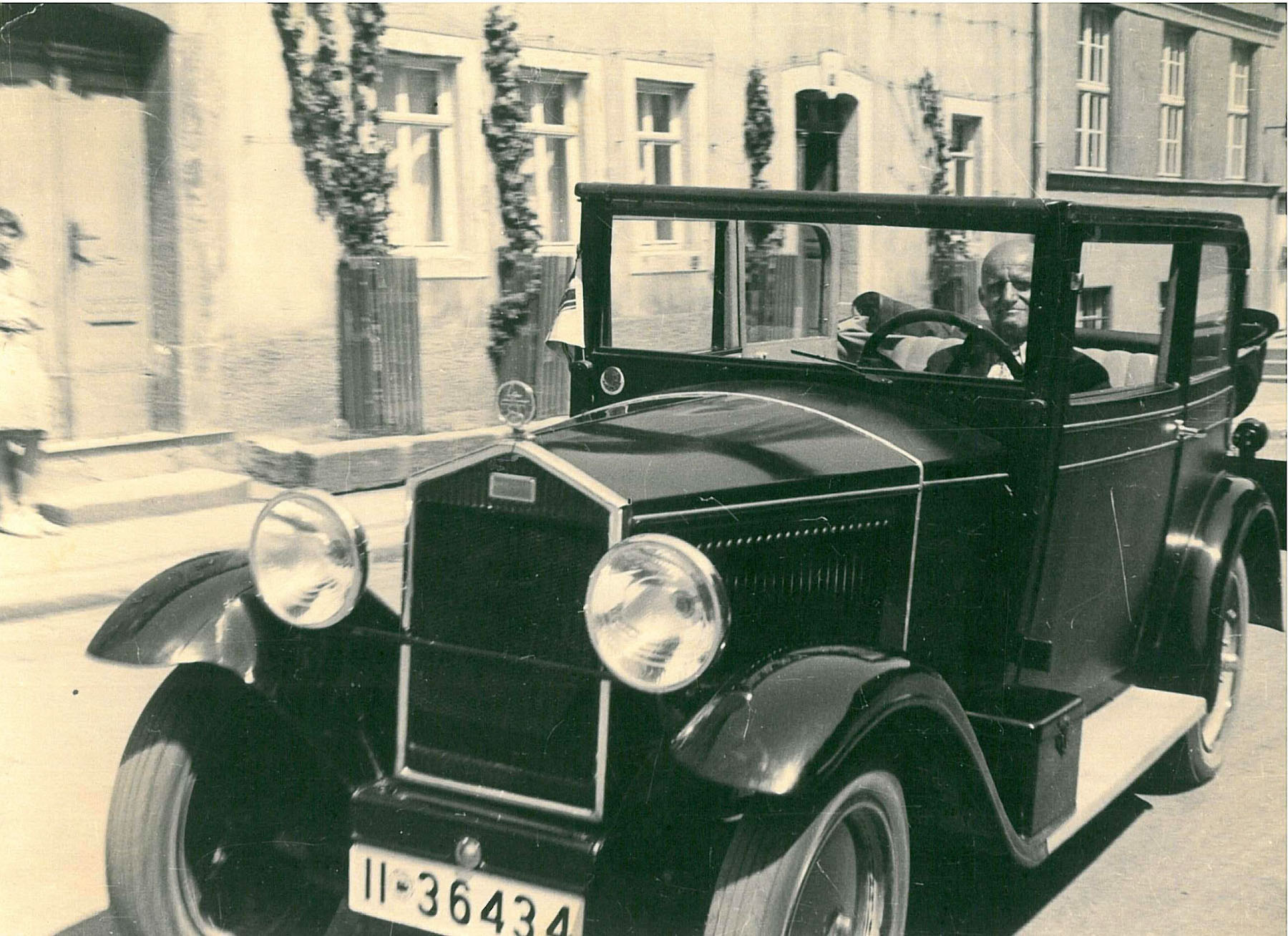 The man behind the Flying Tourbillon was known for his dedication to and fascination for all things technical and mechanical. Following his three-year service as a driver in Berlin during World War I — after his discharge due to his injuries from an explosion — he would return to Glashütte to continue his teaching and watchmaking career… And to dive yet deeper into the world of automobiles: Helwig was the third citizen of Glashütte to obtain a driver’s license and his first automobile? That was a Bugatti. 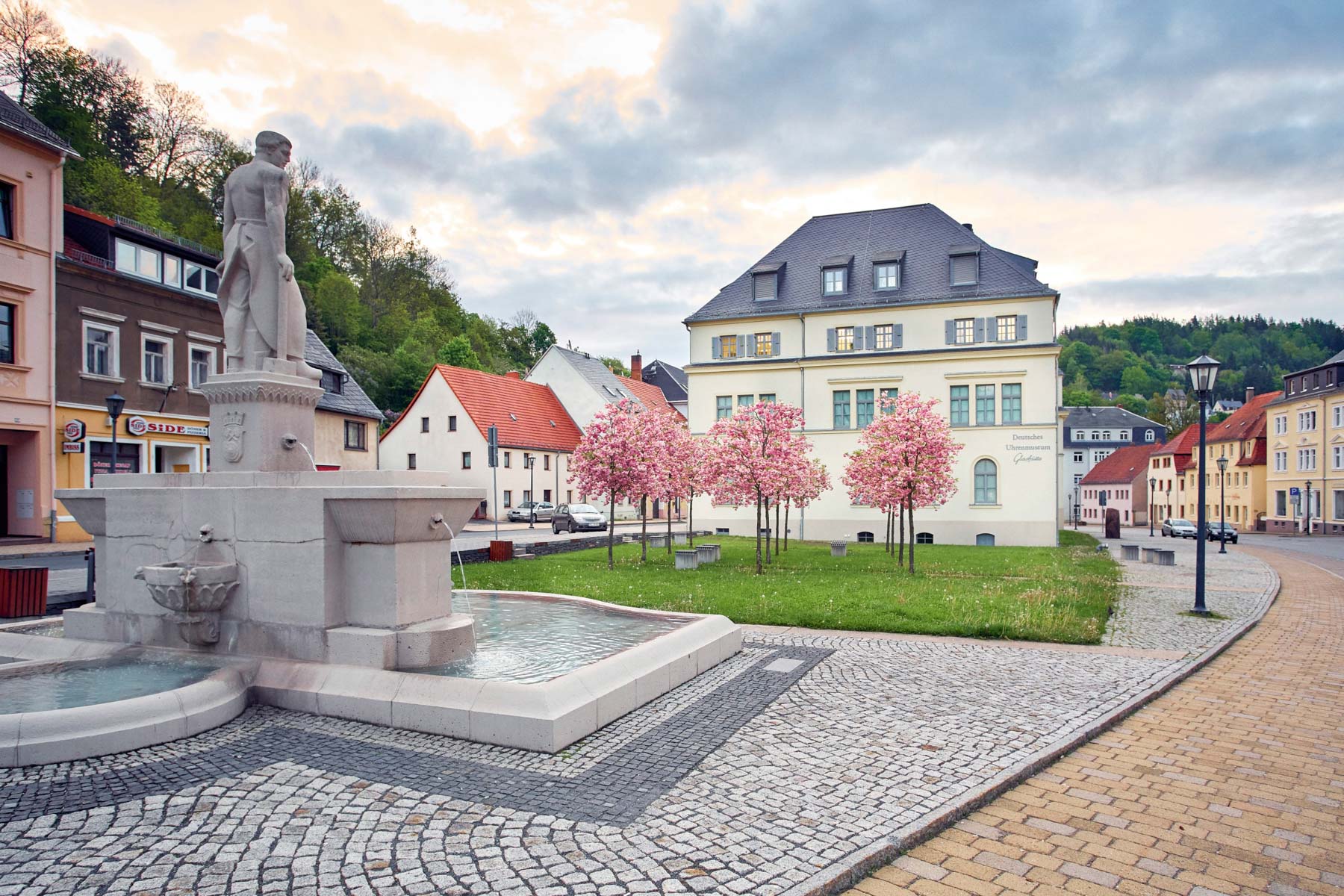 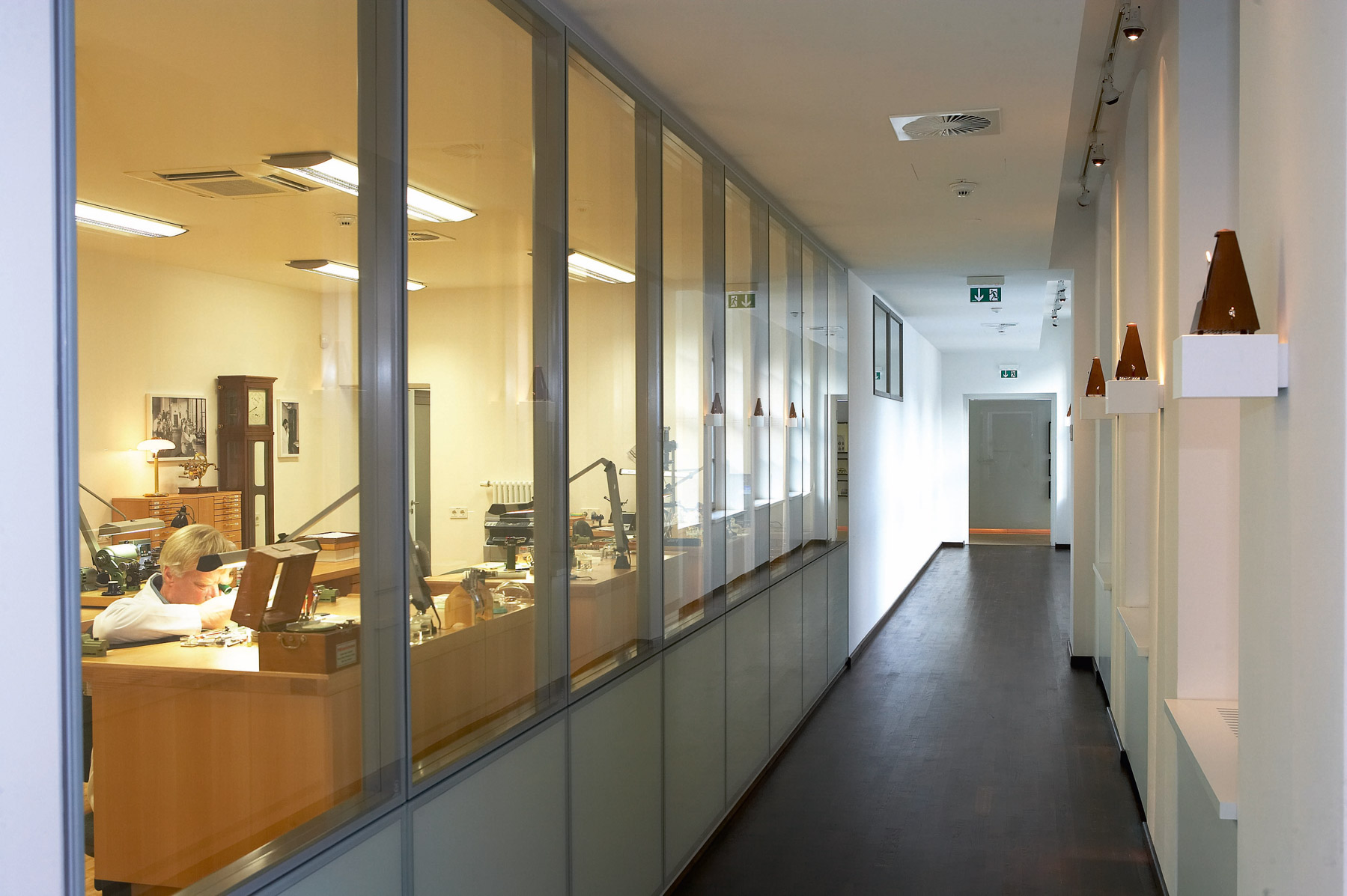 Today, the very building that once housed the German Watchmaking School of Glashütte in which the first Flying Tourbillon watches were developed and made under Helwig’s guidance is now the proud home of the German Watch Museum Glashütte — a place well worth a visit for every watch lover. A Glashütte Original timepiece is meant to be enjoyed by multiple generations. In appreciation of this fact, the manufactory has established a dedicated workshop here to preserve and restore the beauty of historic timepieces produced by Glashütte Original or one of its predecessor companies. Its employees specialize in the restoration and care of valuable Glashütte timepieces from different eras, equipped with the know-how and tools they need to design, manufacture and decorate period-correct replacement parts — often entirely by hand-operated machines. Making replacement parts by hand allows the specialists to return vintage pocket watches, precision pendulum clocks, marine chronometers, and wristwatches produced in the past to working order. 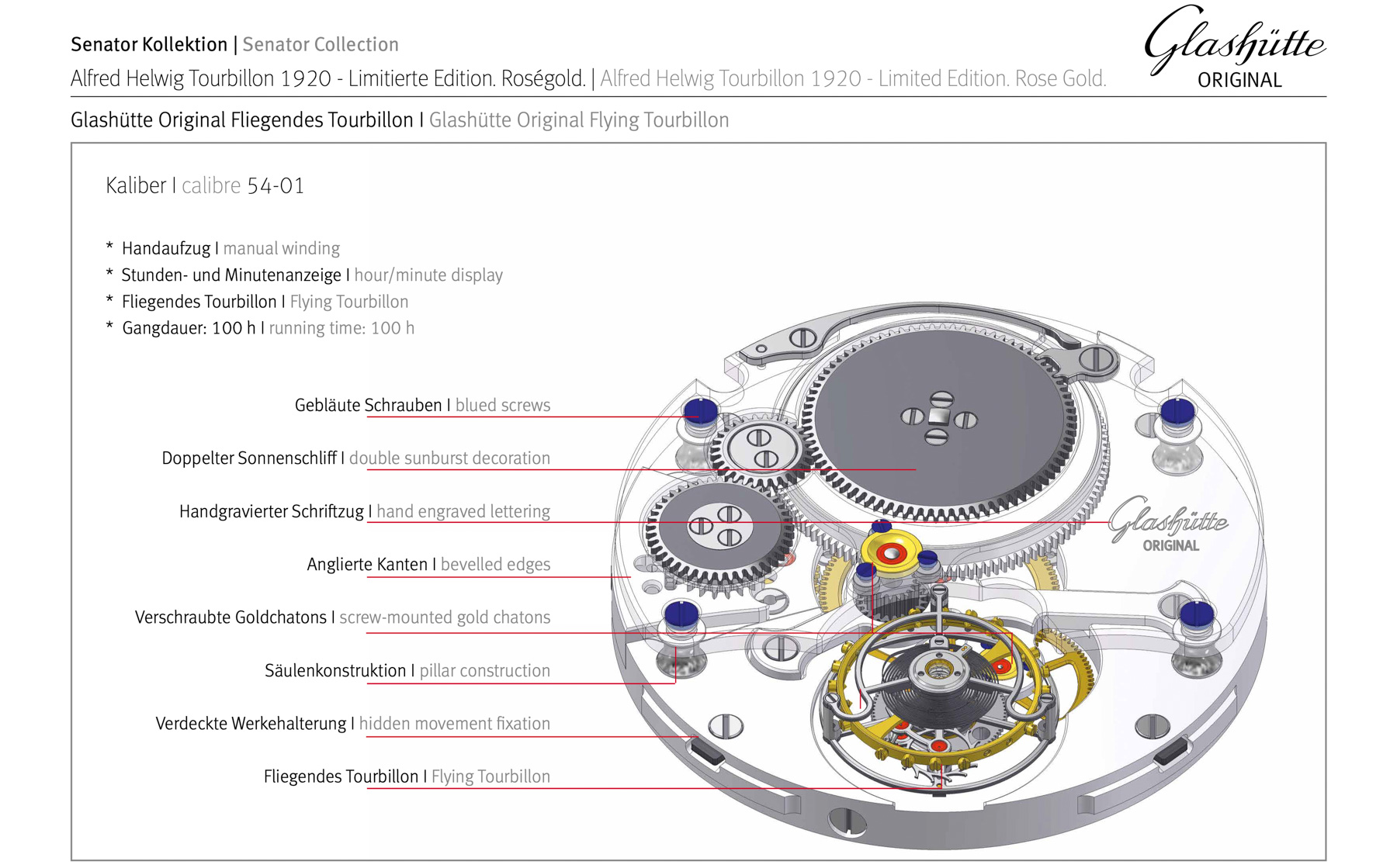 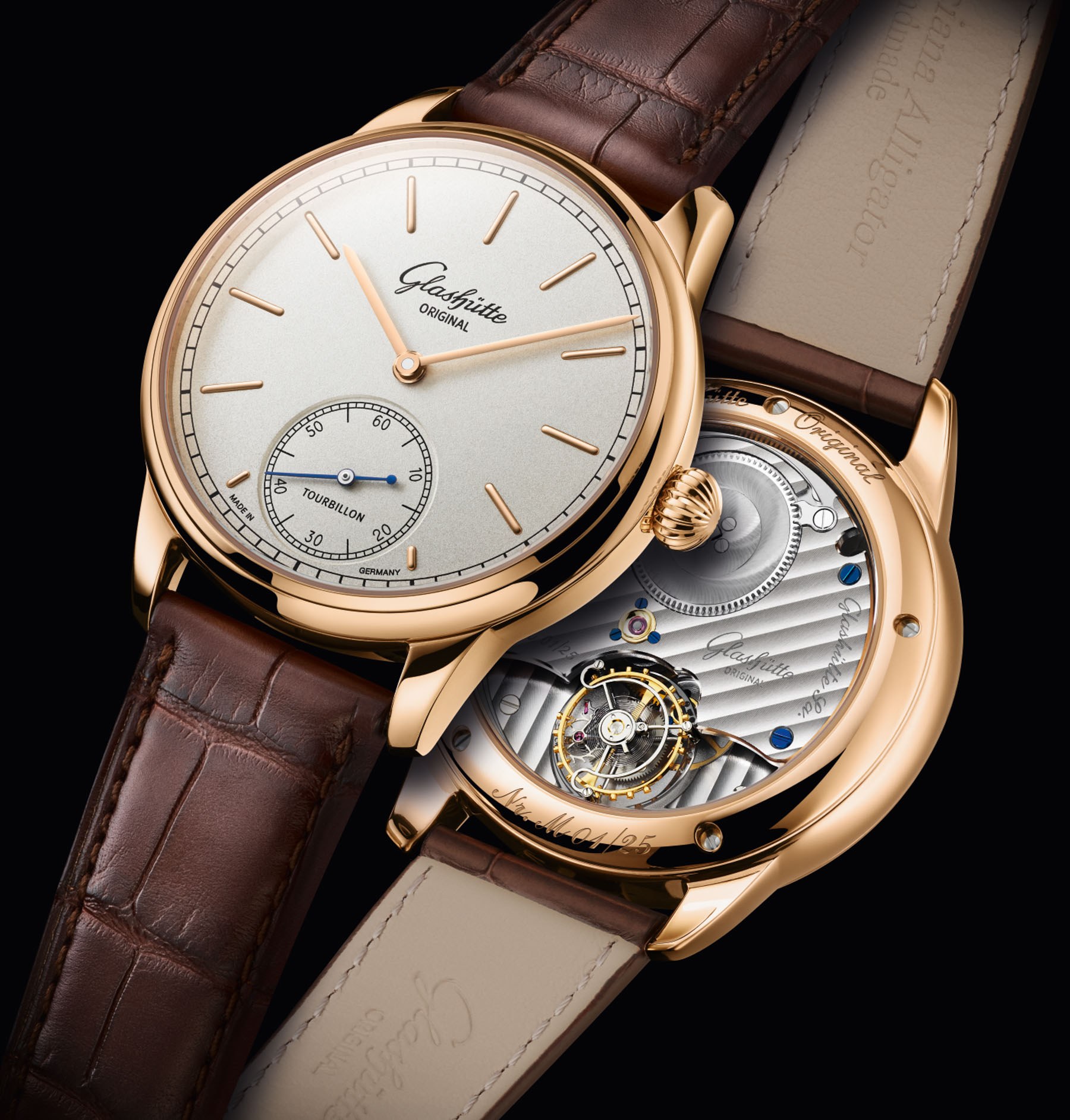 It isn’t all about the past, though. The Flying Tourbillon finds its place of honor in select Glashütte Original timepieces, the latest and arguably most discreet of which having been assembled in this historic workshop. The final assembly of the 25-piece limited run of the Alfred Helwig Tourbillon 1920 was placed in the hands of its expert watchmakers and, as a result, not only does this timepiece bear the name of Alfred Helwig, but it has also been completed by masters of their craft at the original site of his work. 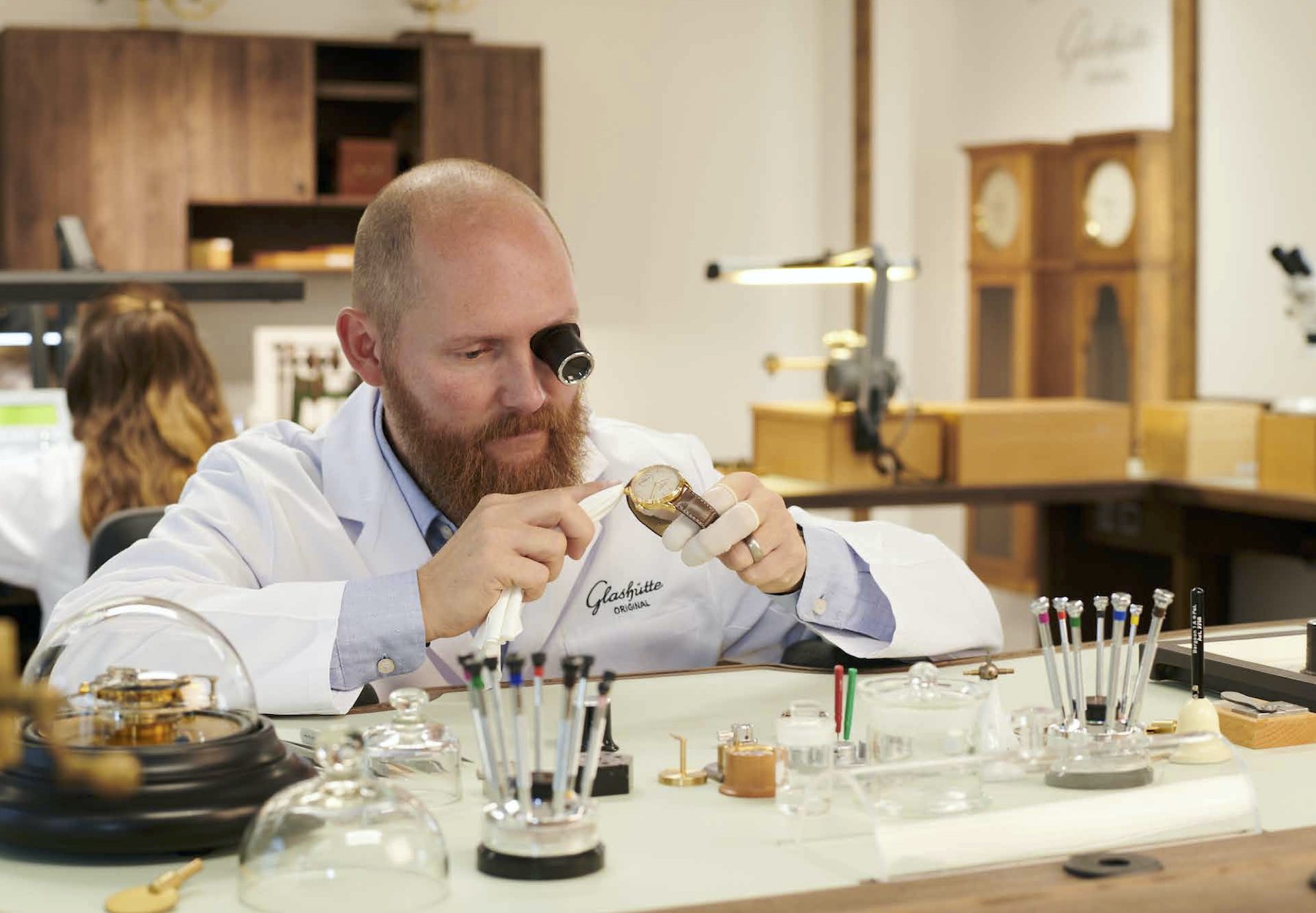 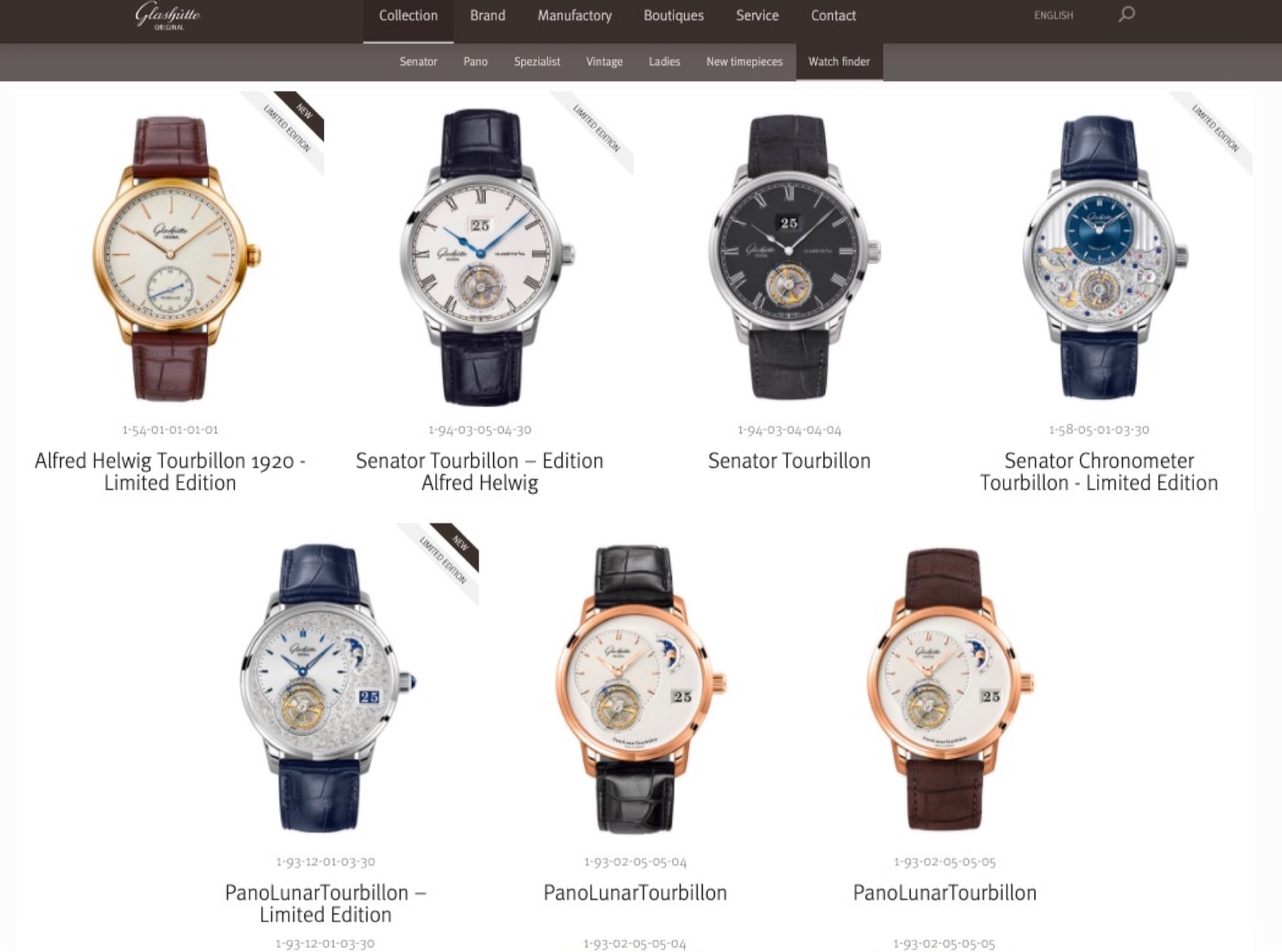 Masterpieces such as the PanoLunarTourbillon combine the Flying Tourbillon with other trademrk Glashütte Original features, such as the Panorama Date that uniquely utilizes two large, concentrically mounted discs to offer exceptional legibility of the date, or the moon phase display that is crafted to outstanding levels of quality specifically in Glashütte Original’s very own dial manufactory in Pforzheim, Germany. 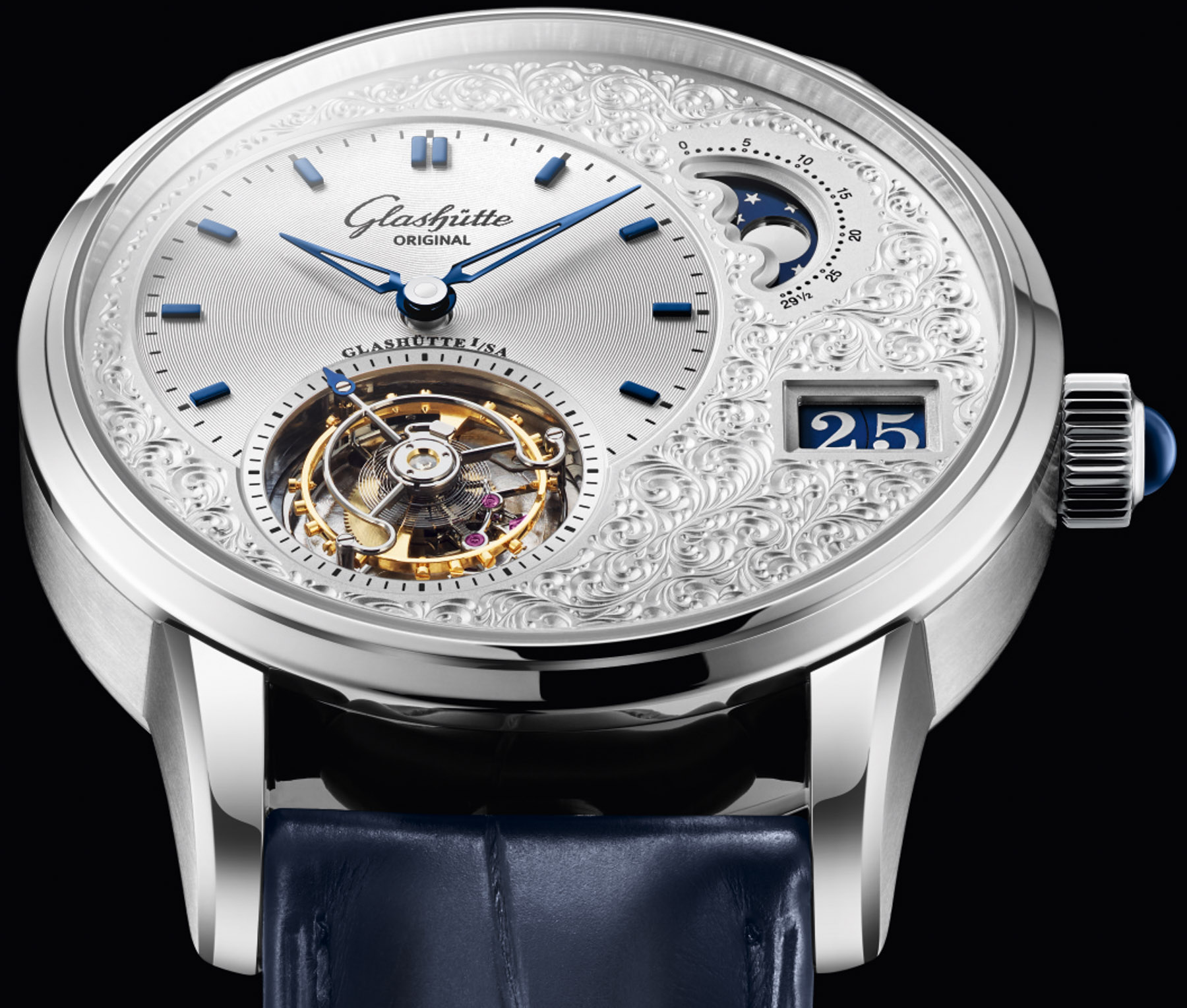 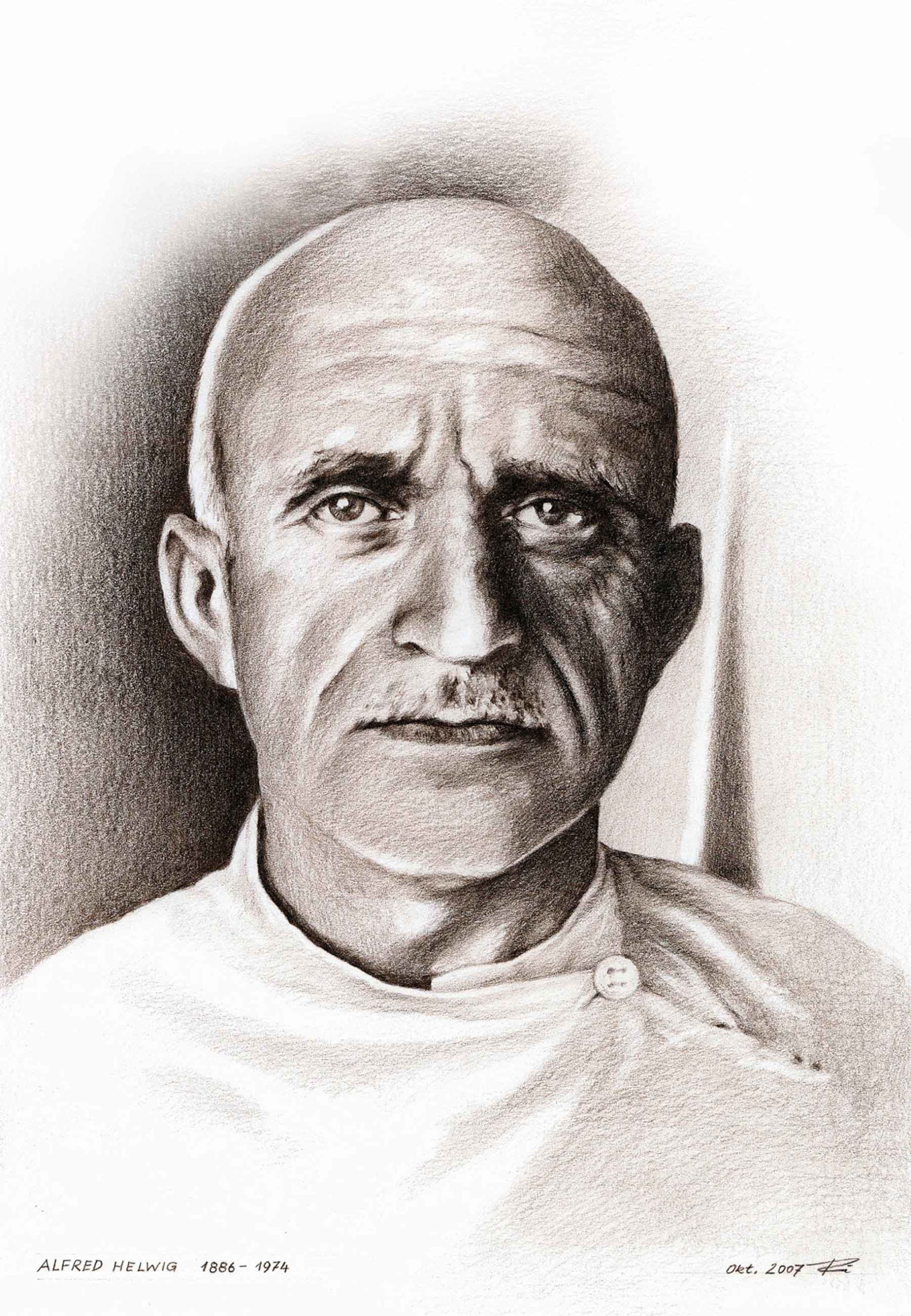 In conclusion, there is so much more to celebrate than merely the 100th anniversary of the Flying Tourbillon: An entire range of timepieces continue the legacy of its inventor, Alfred Helwig, including some that are assembled by those very watchmakers of Glashütte Original who have been driven by their responsibility for carrying the legacy of one of the greatest and most influential teachers and inventors in German watchmaking history. You can learn more about and browse Flying Tourbillon-equipped creations on Glashütte Original’s website here.