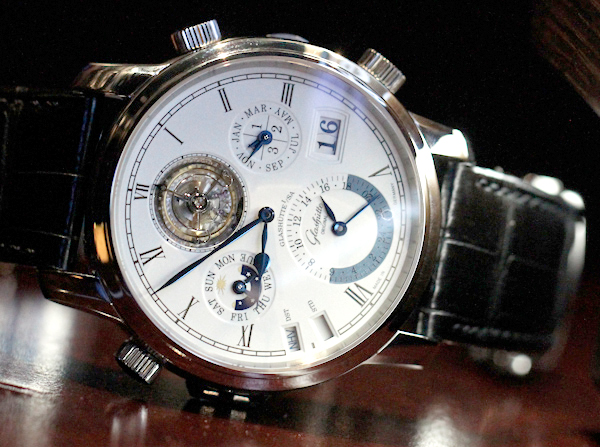 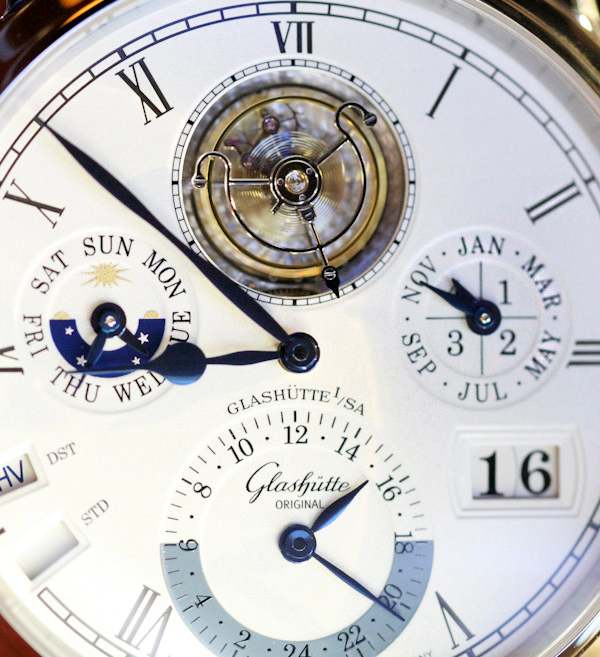 What exactly is a Cosmopolite? A “Grande” one at that? You may find out… In 2012 at Baselworld, I was excited about my forthcoming meeting with Glashutte Original. The (probably) under-appreciated Swatch Group-owned brand makes some fantastic watches. While they have their place in the Swatch Group and can’t do everything they like, they still abide by Germanic principles to produce useful, high-end watches focused more on function and tradition versus mere luxury lifestyle. So I waited eagerly for my meeting, I even showed up with my own Glashutte Original watch that I actually own! They sadly didn’t seem to notice or care. Like many other brands, 2012 was not exactly prolific when it came to the release of new models. Glashutte Original had a series of line extensions, some new sizes, but nothing really new. Guess I will have to wait until this upcoming Baselworld to see fresh stuff, but there was one interesting piece I did come across…

It was not however until months later that I had a chance to experience the Glashutte Original Grande Cosmopolite timepiece hands-on. As a limited edition of just 25 pieces, there won’t be many of these. One has to wonder why a brand even goes to that effort. It is a branding experience for sure, but think of it through the rationalization of any normal mass-volume product maker. Three to four years of development and prototyping to make just 25 watches? Maybe a few more after that. You’d need to charge an arm and a leg just to break even. Which is actually what tends to happen given that pieces like the highly complex Grande Cosmopolite are brand makers versus money makers. 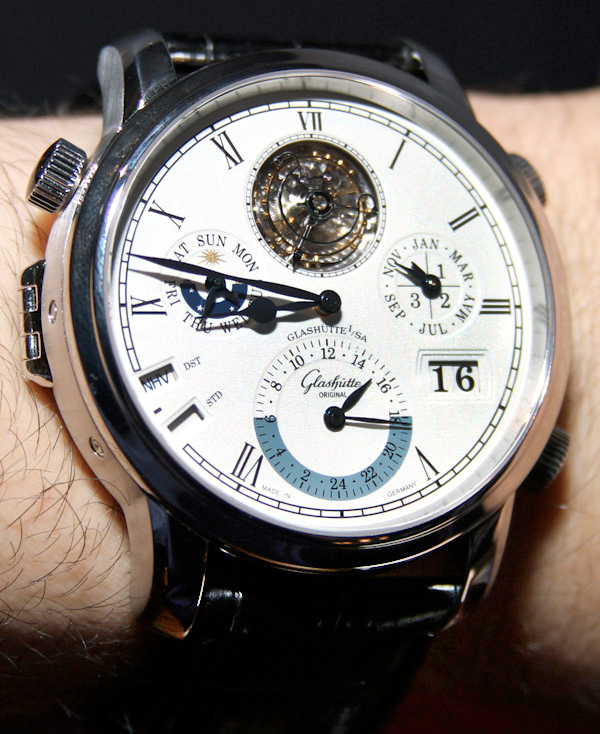 While the price of this watch is undoubtedly high, it could be higher given what Glashutte Original or any other brand would want to profit from the development of such a timepiece. This is after all the most complicated watch ever produced by the German brand as far as we know of. In a nutshell, the Grande Cosmopolite is a tourbillon-based world timer with a perpetual calendar that is able to track 37 versus “just” 24 time zones. Of course it also has Glashutte Original’s Panorama Date (which is their name for a big date window).

The rear of the watch is hunter style, meaning it opens up via a hinge like the backs of many pocket watches. The inside of the case opening has some details on the world time function, and you get to see the rear of the movement where a convenient power reserve indicator is located for the manually wound in-house made Glashutte Original movement. It is all very nice and charming. According to Glashutte Original it will take about two years to produce the entire 25 piece run. There might be more after that, but the “original” Grande Cosmopolite case will only come in platinum. However, this being a prototype version they travel around with, the piece you see has a steel case. Try not to be too disappointed. 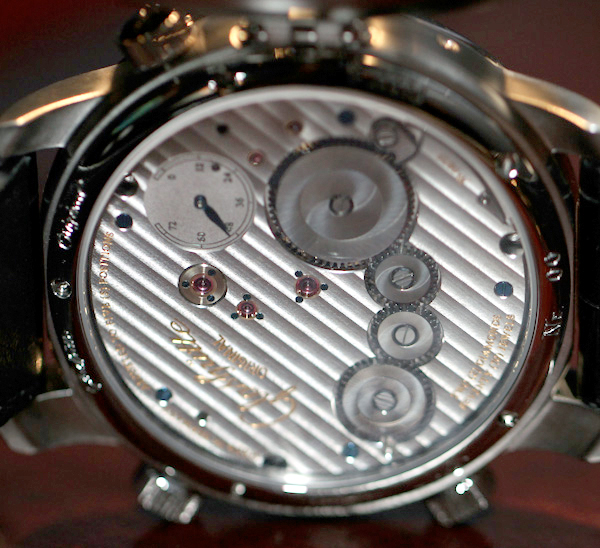 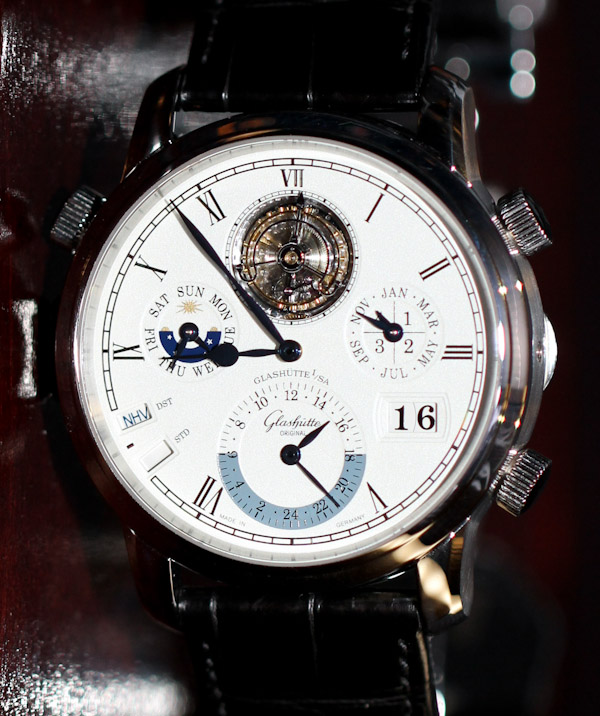 Given the wealth of information on the dial the face is surprisingly easy to digest. Two opposite windows near 9 and 3 o’clock handle all of the calendar information as well as a day/night indicator – in concert of course with the big date indicator. The top of the dial is dedicated to the large flying tourbillon. On a tangent I thought it was interesting and worth noting that the flying version of the tourbillon (no top bridge) is actually a German Glashutte creation. Anyhow, the lower part of the dial is your reference time, and two little windows near 8 o’clock indicate the local time. Glashutte Original will also customize the watch to show your reference time (home city) as your actual home city versus the standard airport code for the normal time zone reference city.

Remember when I said that the Glashutte Original Grande Cosmopolite tracks 37 time zones? Well it does. That means the world time function doesn’t just cycle through 24 time zones moving the hour hand around, but it takes into consideration some of the half hour and quarter hour time zones certain countries have (perhaps defiantly) decided to create. Not only that, but it offers you those times in both daylight saving and standard times, and lets you know what places even have their time change at all. I really can’t wait until daylight saving time is eradicated everywhere (by the way). 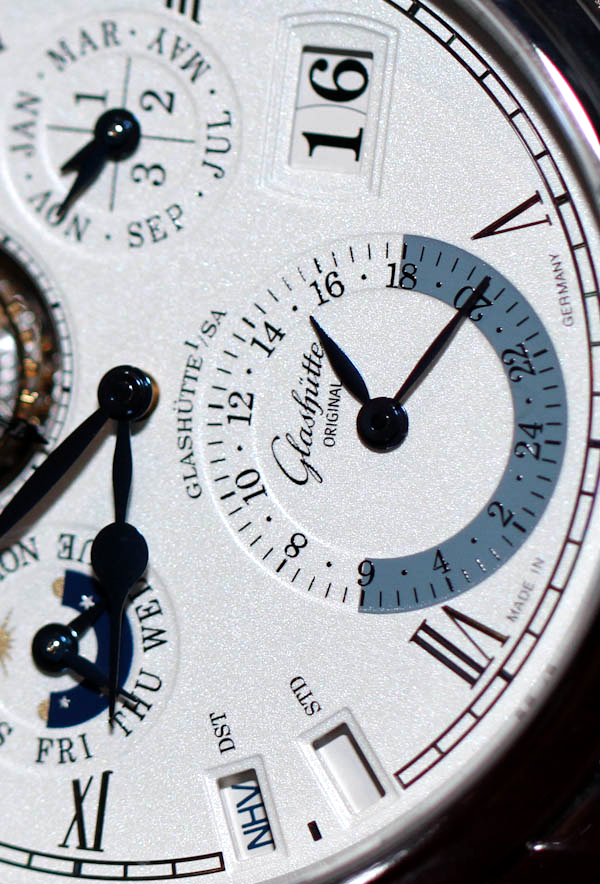 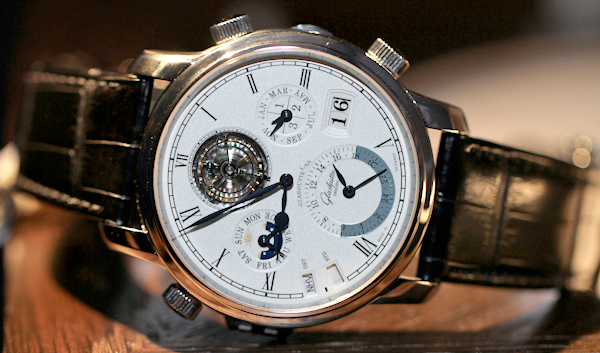 Another positive thing about the mechanism is that you can adjust the perpetual calendar both backwards and forwards in time. This seemingly obvious feature is by no means standard on most picky perpetual calendars. So in a nutshell Glashutte Original has developed a watch with a rather useful world timer, a rather useful perpetual calendar, and done so in a way that not only seems to improve upon the rest, but also combine all of it together in a single package. Oh, and all with a flying tourbillon. As is the case most of the time, tourbillons just sort of seem like thrown in bonuses to sweeten the luxury deal. It is like the final “wow” moment in infomercials. “And that’s not all folks. If you order right now, the good people at Glashutte Original will throw in a flying tourbillon!” It’s like I lose money by not buying it right?

The engine inside this rather impressive creation is the Glashutte Original Caliber 89-01 manually wound movement with a three-day power reserve. The movement operates at 21,600 bph and has two diamond endstones inside (for decorative purposes). It looks quite lovely through the back of the case, but you can tell that most of the interesting stuff is hiding under the dial. 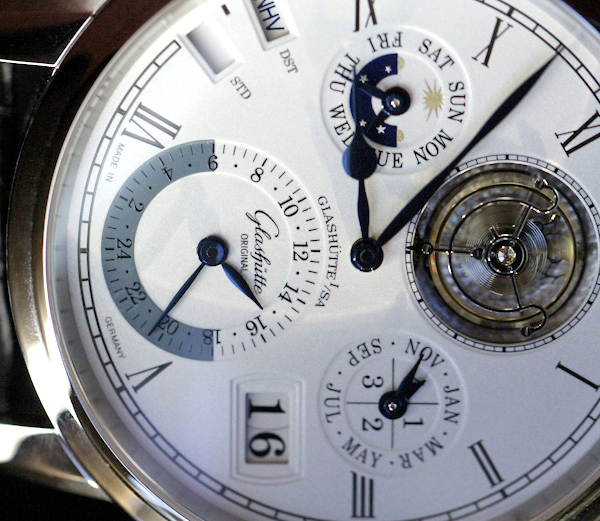 All in all, the Grande Cosmopolite may have a silly sounding name but as a timepiece, Glashutte Original did a rather good job. They dutifully innovated with something new, made it useful, and put it in a package that someone can actually use on a daily basis. However, with a 48mm wide case (in platinum) it will be a heavy little number to lug around. As is common with high-end pieces of this nature, Glashutte Original includes a case with a crown winding claw to keep the calendar accurate. Though they would prefer that you travel with this watch. For the mechanical watch lover with a private jet and a hectic schedule… this is the watch for that person. Price is 325,000 Euros (about $360,000). glashuette-original.com