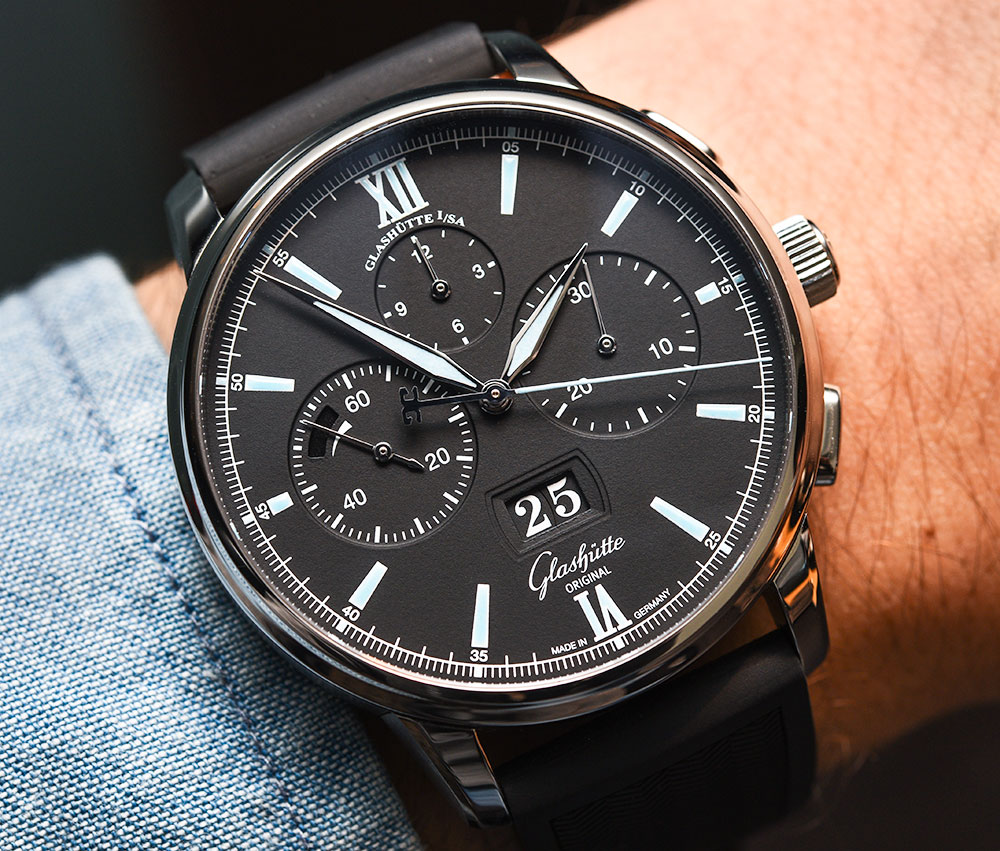 Earlier this year, Glashütte Original launched a steel version of its Senator Chronograph Panorama Date watch. Originally launched in 2014 with precious metal cases, this watch was praised thanks to its in-house developed, column-wheel flyback chronograph movement, a significant accomplishment for the brand. With this new steel version, the Original Senator Chronograph Panorama Date is half the price as the gold model. Of course, the watch is still priced at around $15,000 (on a rubber strap!) so let’s see what the offering here is. 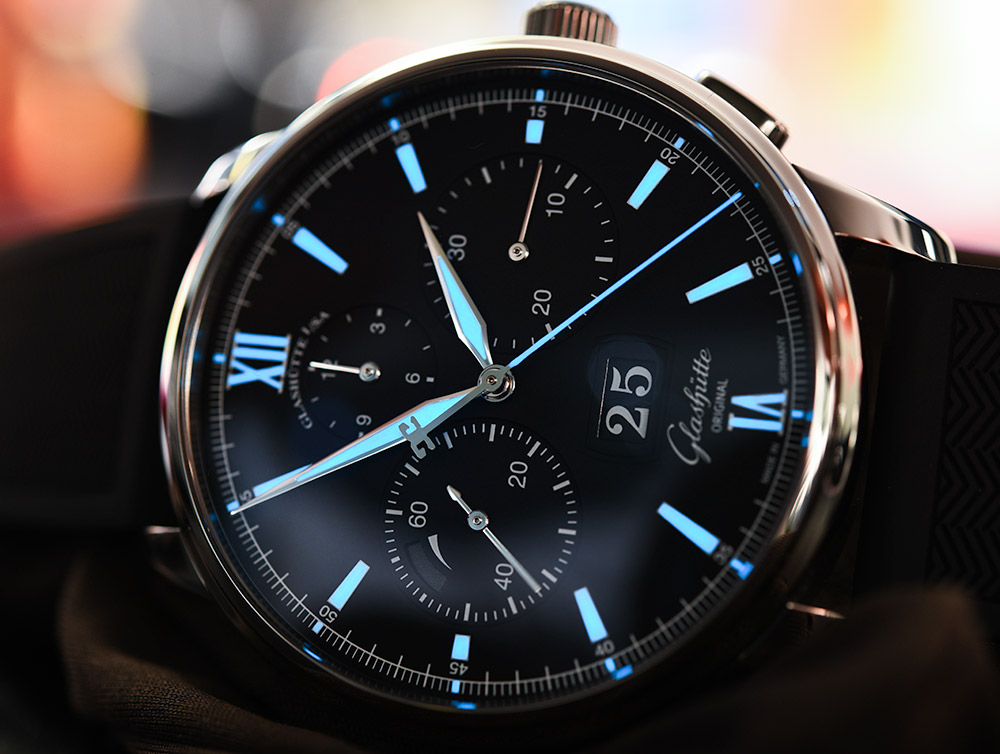 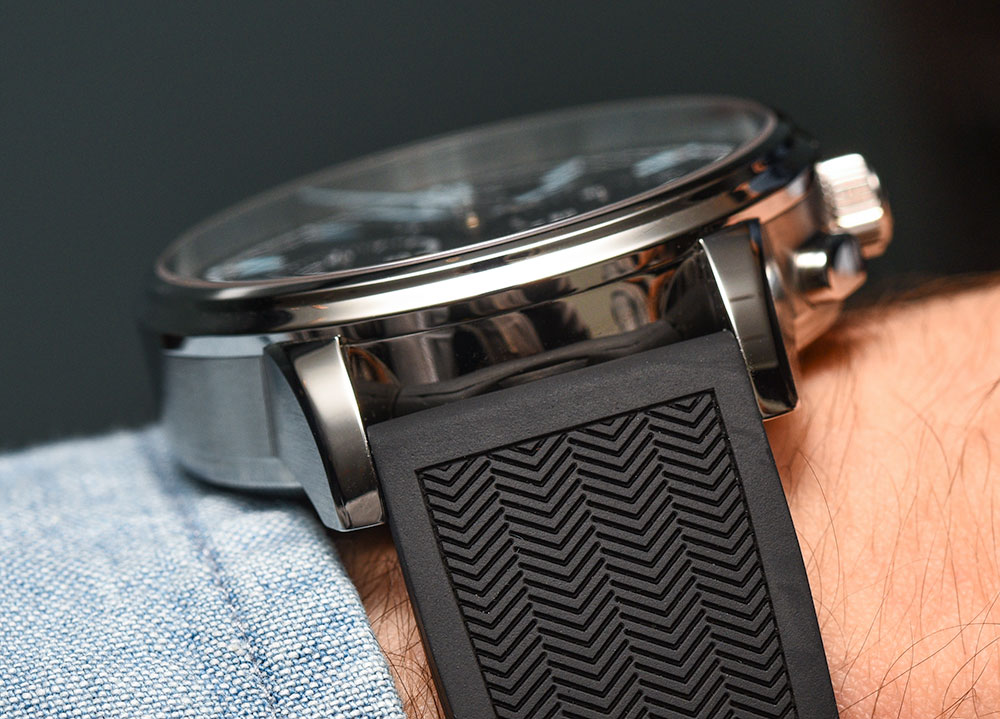 When I think of Glashütte Original, I think of big date windows and relatively contemporary sized (40mm and above), well-executed wrist watches. While most of the line up has a formal, dress watch feel to it, they’re also not afraid to experiment with color as the Glashütte Sixties Iconic Square collection proved. Given the complications of the watch in question today, I can’t help but think that the Original Senator Chronograph Panorama Date is what you would look to if you wanted a timepiece similar to A. Lange & Söhne’s Datograph without the sticker shock (and a sportier look, but more on that later). 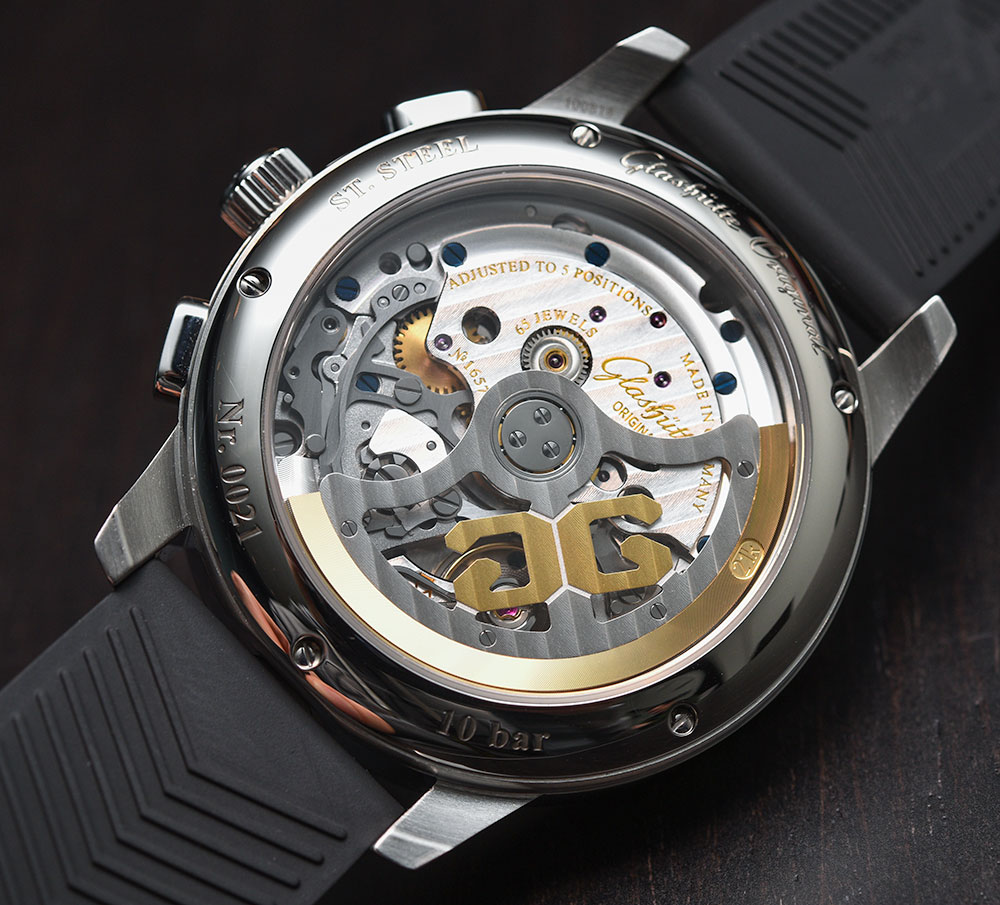 As I mentioned earlier, one of the highlights of this watch is the movement, Glashütte’s calibre 37-01. An automatic movement, it offers a flyback chronograph, big date, and power reserve complication. A flyback chronograph allows the user to reset the chronograph without stopping it first, a useful feature to have if you were timing laps in a race or two events in close succession. 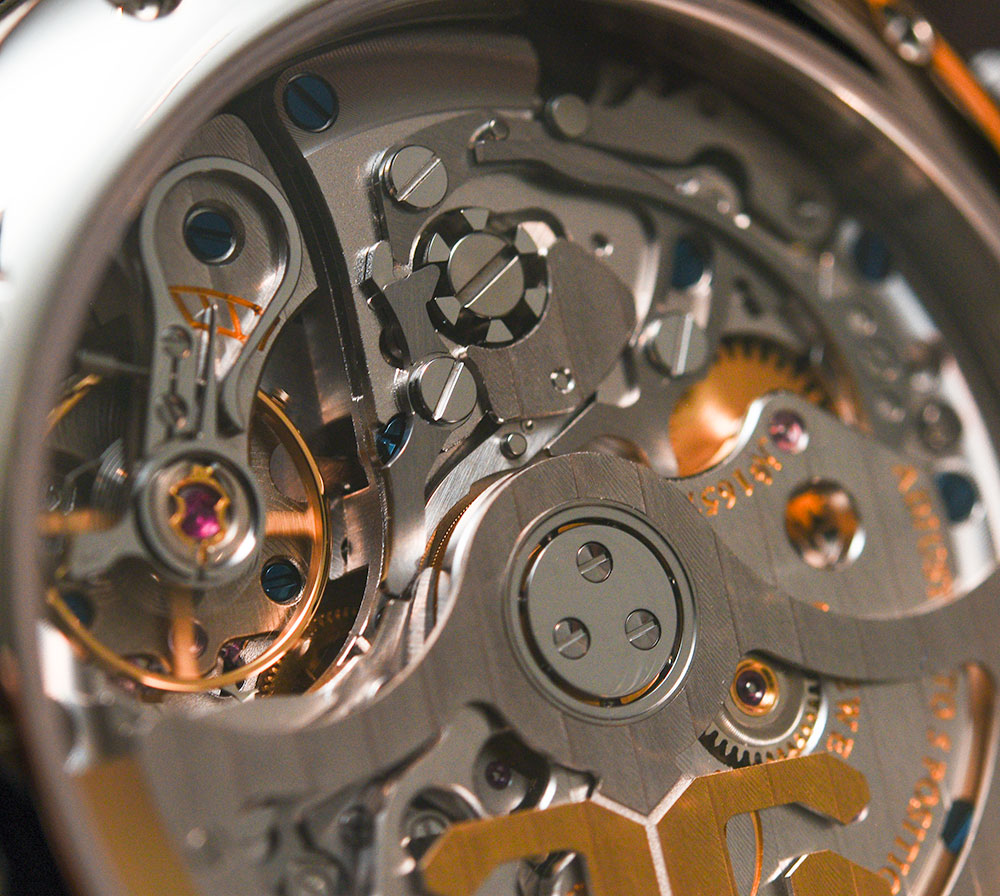 It is only recently in the long history of watchmaking that so many brands have invested the time and resources to developing in-house chronograph movements. While there are reliable and capable options such as the Valjoux 7750 available, the ability to develop something in-house affords the brand quite a bit of bragging rights and is valued by the modern day collecting community. Of course, there is an ongoing debate on the value of in-house movements as well as indictments of the practice that are quite convincing. However, we can’t let this broader discussion steer us away from talking about the movement at hand. 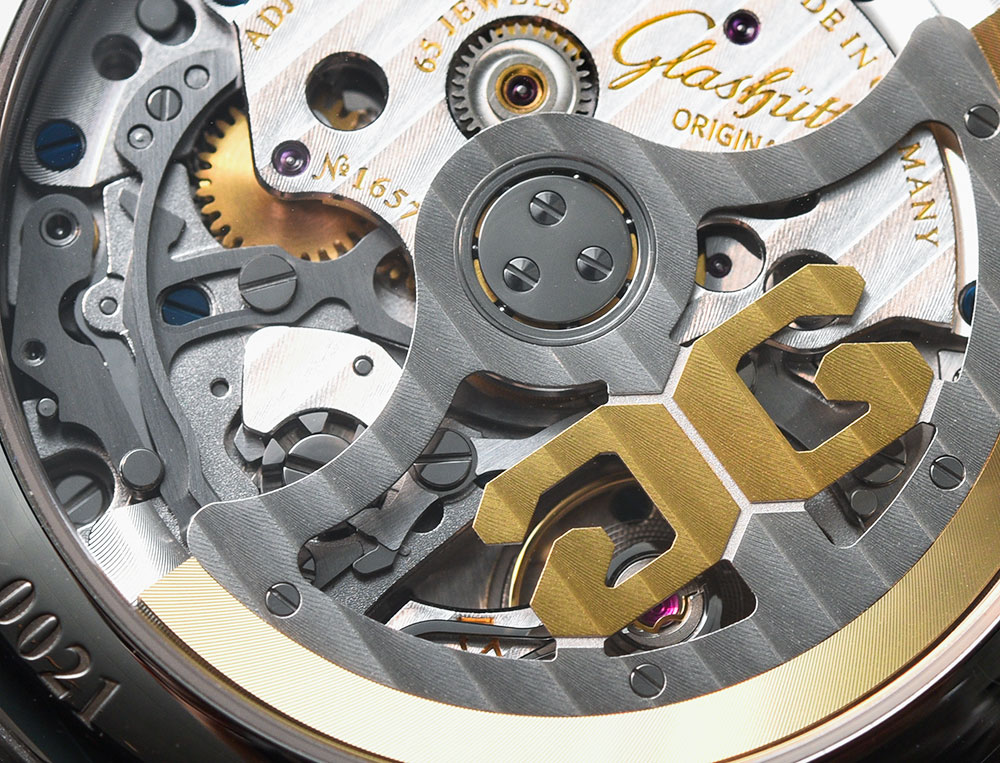 The calibre 37-01 beats at 4Hz and offers 70 hours of power reserve. The brand even claims they have a new oscillation system that guarantees only a 5% deviation from that 70 hours of power reserve. The chronograph mechanism has a 30-minute counter and a 12-hour counter and is activated by a column-wheel. Generally, chronograph movements are either clutch activated or column-wheel activated and while the former is easier to design and manufacture, the latter is claimed to provide a smoother pusher action and less wear on components over time.

The movement is visible through a display caseback and in true Glashütte style, there is a three-quarter plate, swan-neck regulator, heat-blued screws, and plenty of beveled edges. The rotor is 21ct gold and decorated with a ‘double-G’ motif. 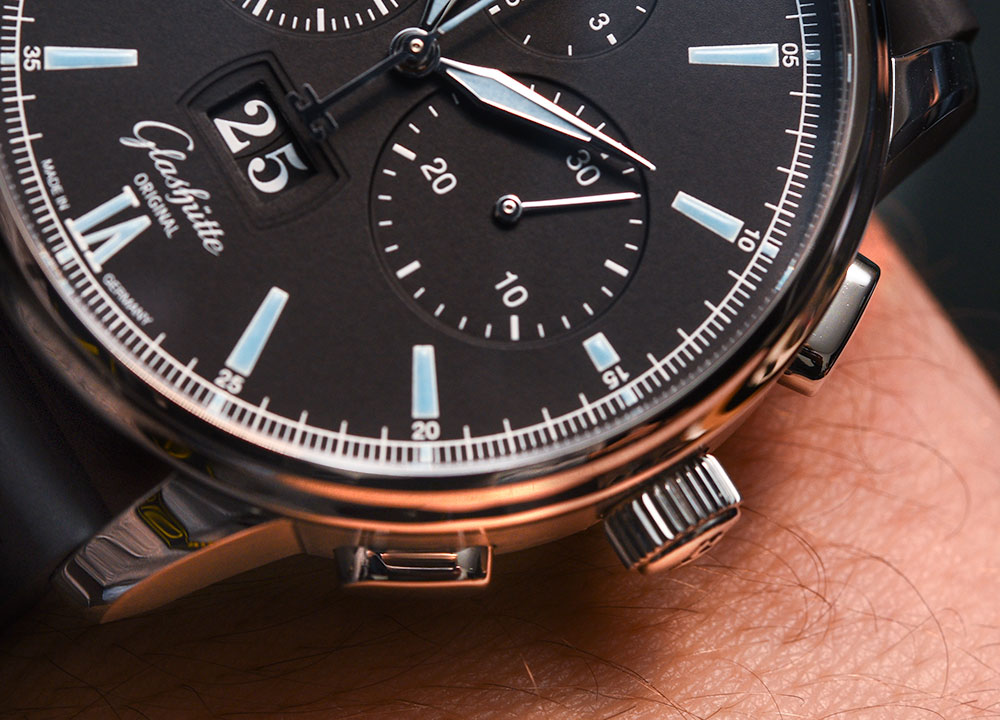 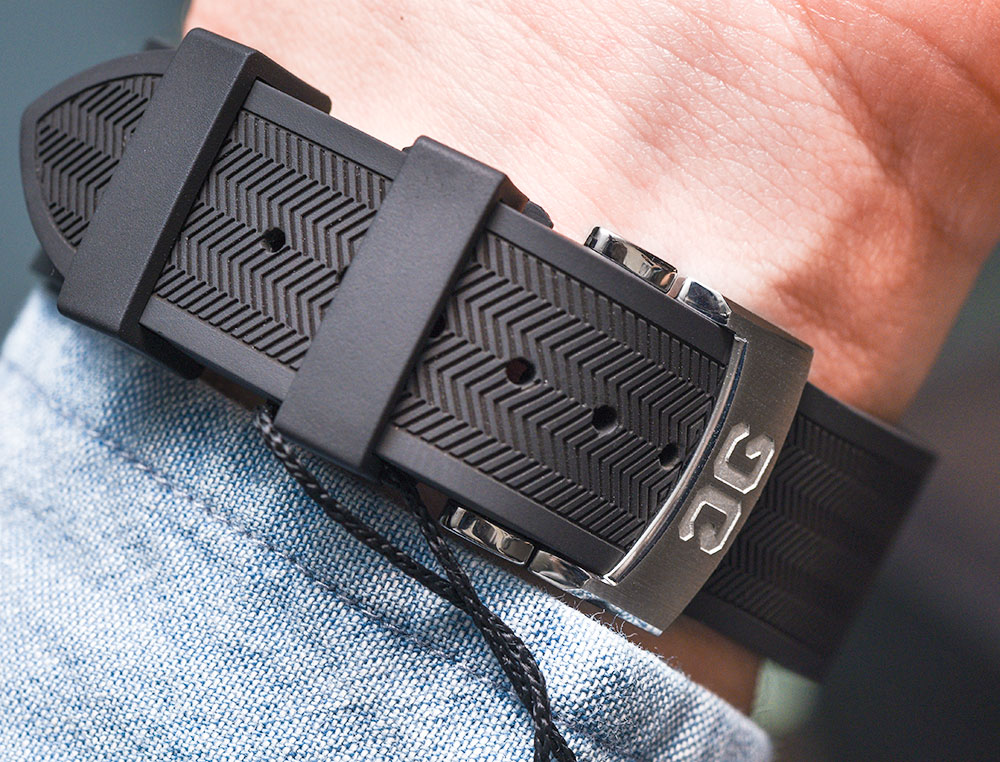 Looking at the case in steel, the thin double-step bezel and the curved lugs help give the watch a more casual, almost sporty look. This is further accentuated by the prominent fluted screw-down crown. The pushers are rectangular and follow the case shape, however. It seems like Glashütte was trying to walk a fine line between making this watch look too sporty or too formal. 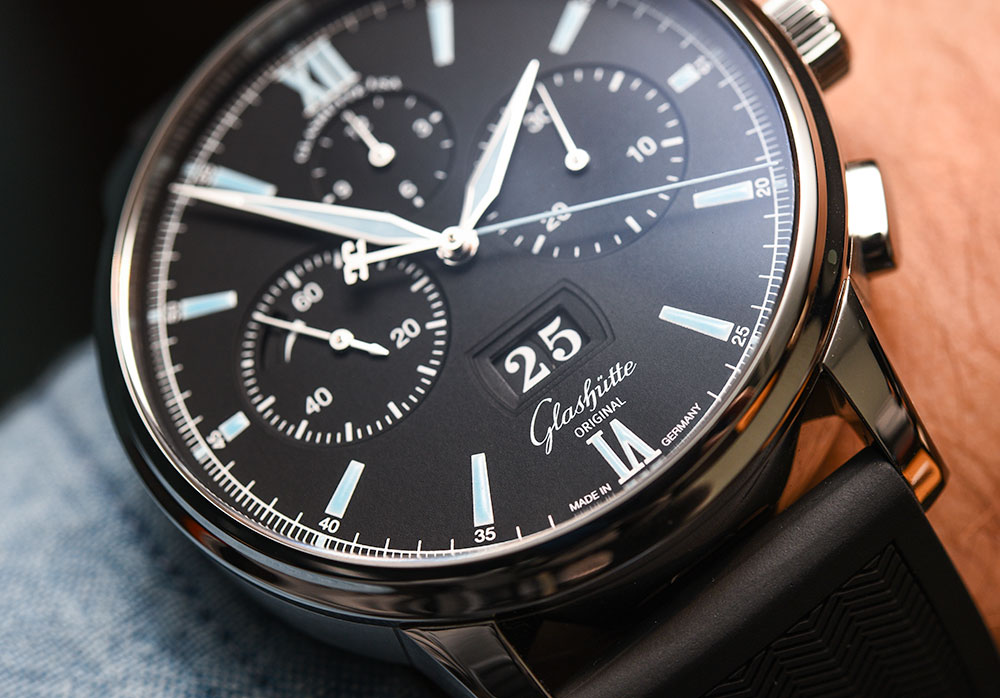 At 42mm wide and 14.6mm thick, this is a fairly large sized watch and this is more a consequence of technical limitations as an automatic chronograph movement can only be so thin. While aesthetically, the watch wouldn’t look out of place with a suit, it’s definitely not inconspicuous enough to be a true dress watch. It is rated to 100m of water resistance and the accompanying rubber strap means you can take it swimming with you – just remember not to operate the pushers underwater. 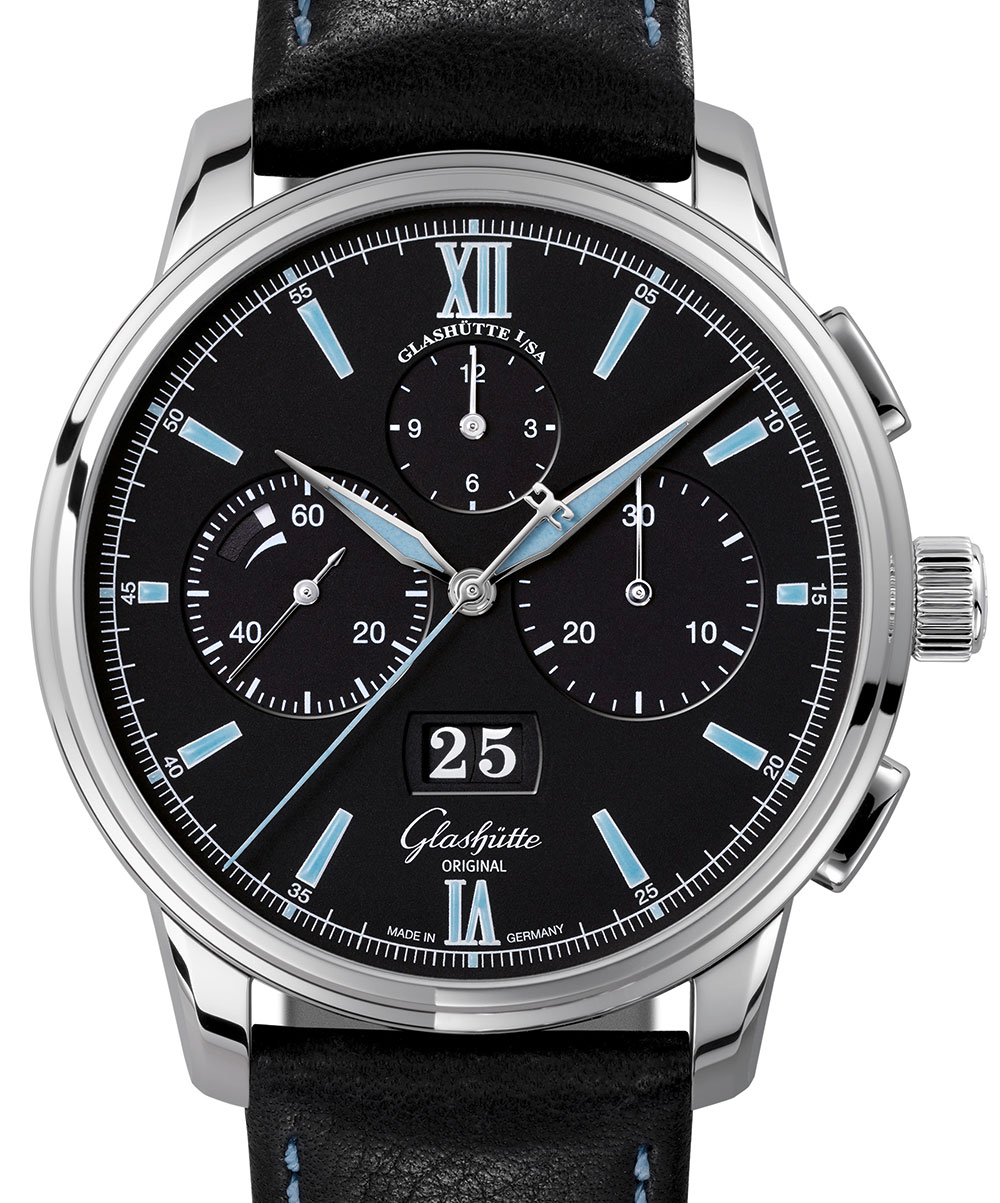 The dial is where some of the biggest design changes have been introduced that lend this watch its casual look. The base dial is varnished in a deep, rich black, unlike its precious metal siblings, and for those used to looking at traditional three-dial chronographs or even the A. Lange & Söhne Datograph, the Glashütte turns things on its head – literally. The 12-hour counter is now at 12:00, with running seconds and power reserve at 9:00, 30-minute counter at 3:00, and the panorama date down at 6:00. With all the functions this watch offers, it’s no surprise that there’s a busy dial and while most of it is well designed, I do find the “Glashütte I/SA” printed right above the 12:00 sub-dial to be unnecessary and a bit of an eyesore. 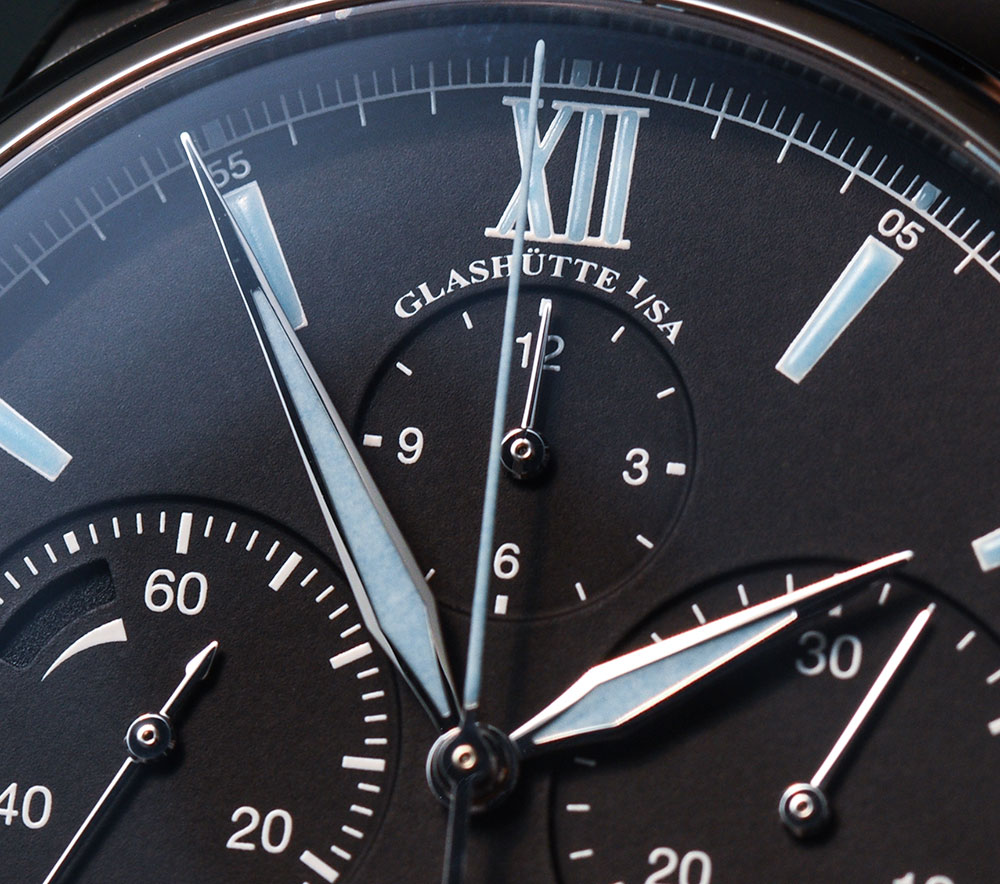 The lack of applied markers and limiting the Roman numerals to just 12:00 and 6:00 is a decision that I appreciated here. The markers are now printed in blue Super-LumiNova. The hands are polished white gold and filled with Super-LumiNova as well – including the chronograph seconds hand. Even in daylight, legibility is not an issue as the polished hands contrast well against the black of the dial. I particularly like the ‘double-G’ counter weight on the end of the seconds hand. 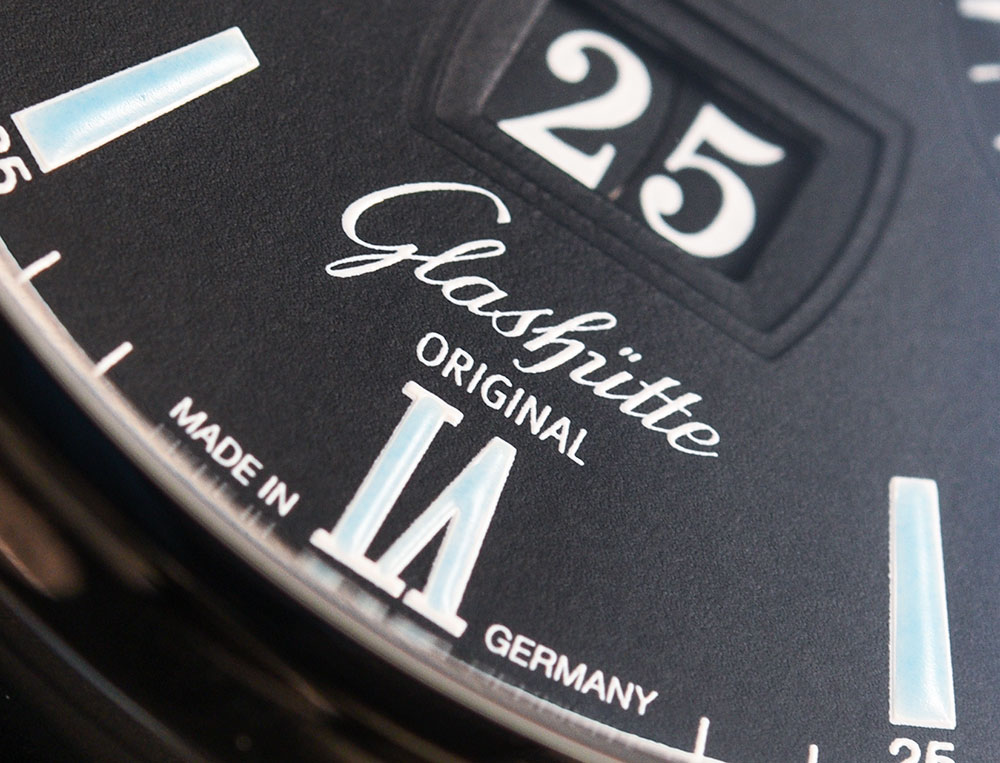 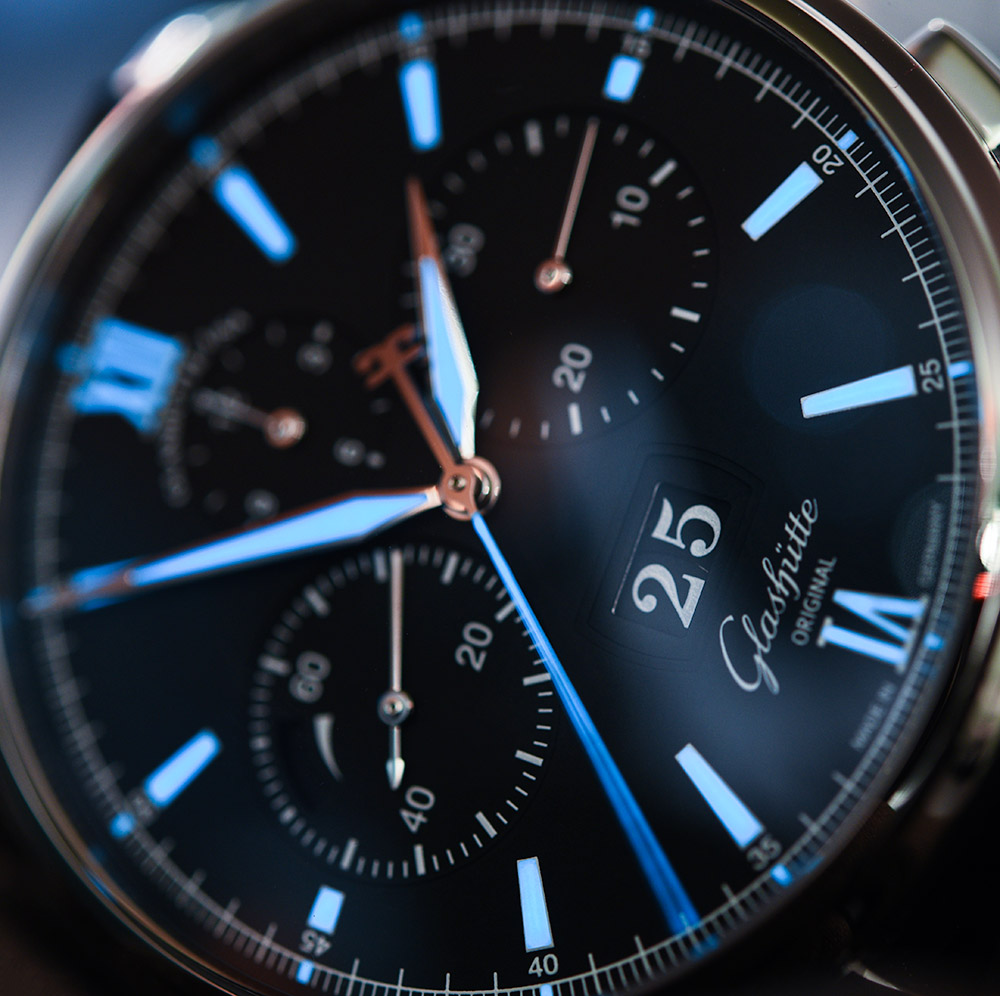 I’ve always had a soft spot for black-dial chronographs like the A. Lange & Söhne Datograph and 1815 Chronograph, so it’s no surprise that I find the Glashütte Original Senator Chronograph Panorama Date appealing. The dial layout may not be to everyone’s liking but overall this is a well-designed, well-made, and mechanically interesting watch. Sure there are other chronographs with in-house movements that cost less, but they don’t quite offer the same things that this does. The included rubber strap is a nice touch and a sign that Glashütte really wants you to look at this as a casual watch. The Glashütte Original Senator Chronograph Panorama Date is now available for $16,400 on a bracelet and $14,600 on a rubber strap or leather strap with contrast stitching. glashuette-original.com