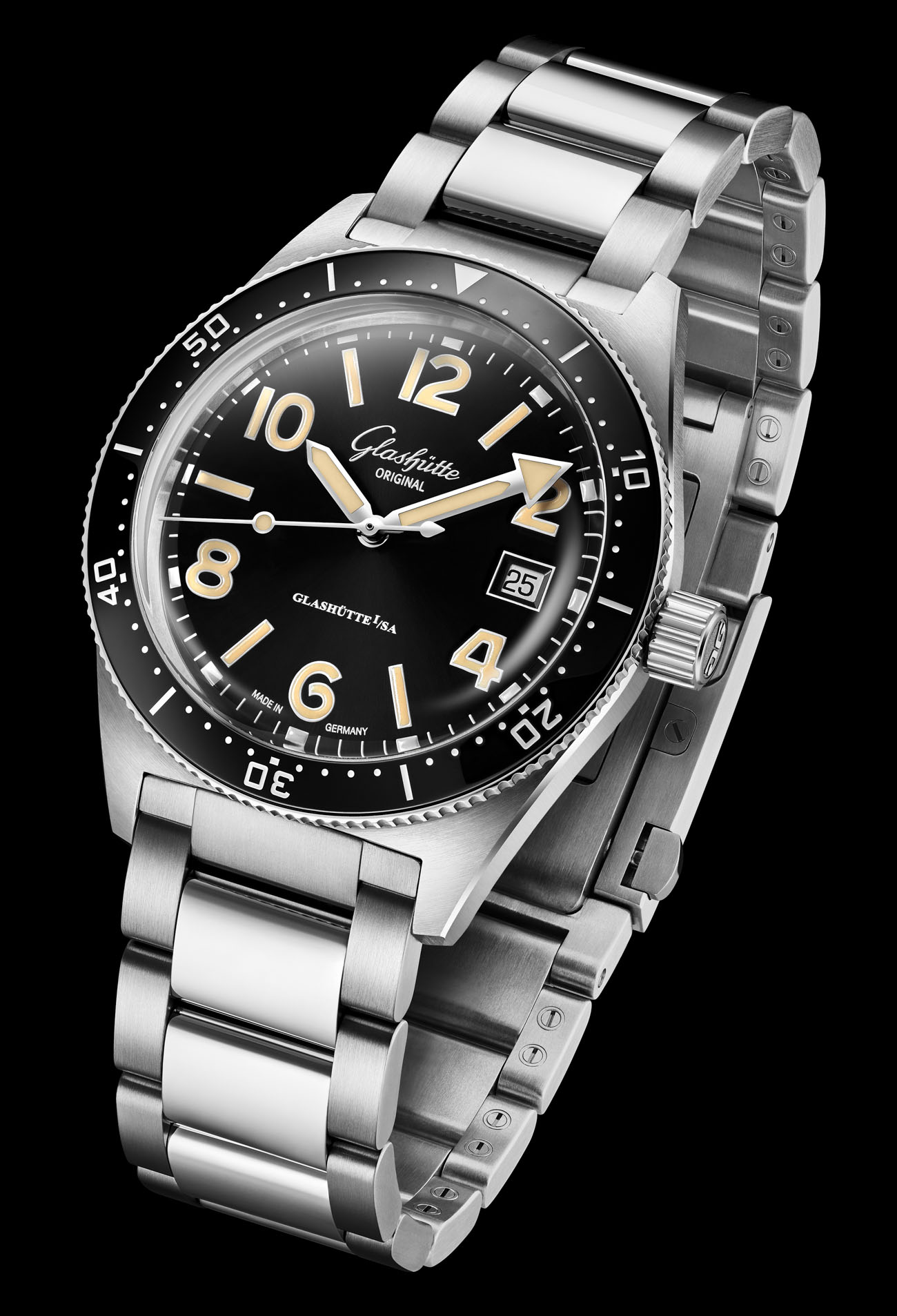 For 2019, Glashütte Original, the Swatch Group’s German outpost in the small Saxon town of Glashütte, has released the Glashütte Original Spezialist SeaQ 1969 watch in two variations, one limited, and one of general release. Both the limited and unlimited versions are designed with high functionality in mind. The excellent dial legibility is useful beneath the waves or just as a daily wear, and the superlative German manufacturing one expects from Saxony’s horological hotbed is sure to keep your day running on schedule. Both watches are powered by the Calibre 39-11. These three-handed models are joined by a small date at 3 o’clock in contrast to the simultaneous release of the Glashütte Original SeaQ Panorama Date. The 39-11 is an automatic movement that has been tested to meet both the DIN 8306 and ISO 6425 standards for diver’s watches. The movement has a power reserve of 40 hours and an operating frequency of 28,800vph (4Hz). Although not breathtaking, those figures are more than sufficient for the tasks this watch will be expected to perform. The case of both models is made from uncoated stainless steel, which has been polished, brushed, and topped with a rotating “count-up” timing bezel. Both watches are water resistant to 200 meters. With a pleasingly conservative diameter of 39.5mm (and a height of 12.15mm), this watch is true to the source material — the SeaQ 1969 that inspired both models on the original’s 50th anniversary. However, only one of these pieces pays homage to the original in its name, and that’s the limited model. Ref. 1-39-11-01-80-## (with the final two numbers denoting strap/bracelet/buckle choice) is limited to just 69 pieces and most noticeably differentiated from its unlimited brother (reference 1-39-11-06-80-##) by the lume color of the hands. Although no official pack shots exist of the case back, it has been very nicely decorated with a trident (a powerful-looking trident) that has been merged with the Glashütte logo and is surrounded by 20 waves — one for each of the bars this watch can withstand. Glashütte Original managed to avoid the headache of fitting 30 waves on the caseback of the SeaQ Panorama Date by giving it a sapphire display back. Although it’s alway a shame not to see the nicely finished movements of GO, the caseback is an exceptional example of its kind, while also making perfect sense for this watch from a utility and homage perspective. On first glance, this watch — which is very much meant for the sea — struck me as very similar to the recently released TAG Heuer Autavia Isograph in terms of proportions, silhouette, and general mien. However, having looked it over a while longer, I think this watch hangs together far better and looks top-notch in terms of finishing (as one would expect for roughly twice the price). With so many reference numbers to wade through, it is a blessing that Glashütte Original kept the pricing as simple as it could be by not adding a premium to the limited. The price for both models is €8,500 on a strap with a buckle, €8,800 Euros on a strap with a deployant clasp, and €9,700 Euros on the matching steel bracelet. glashuette-original.com