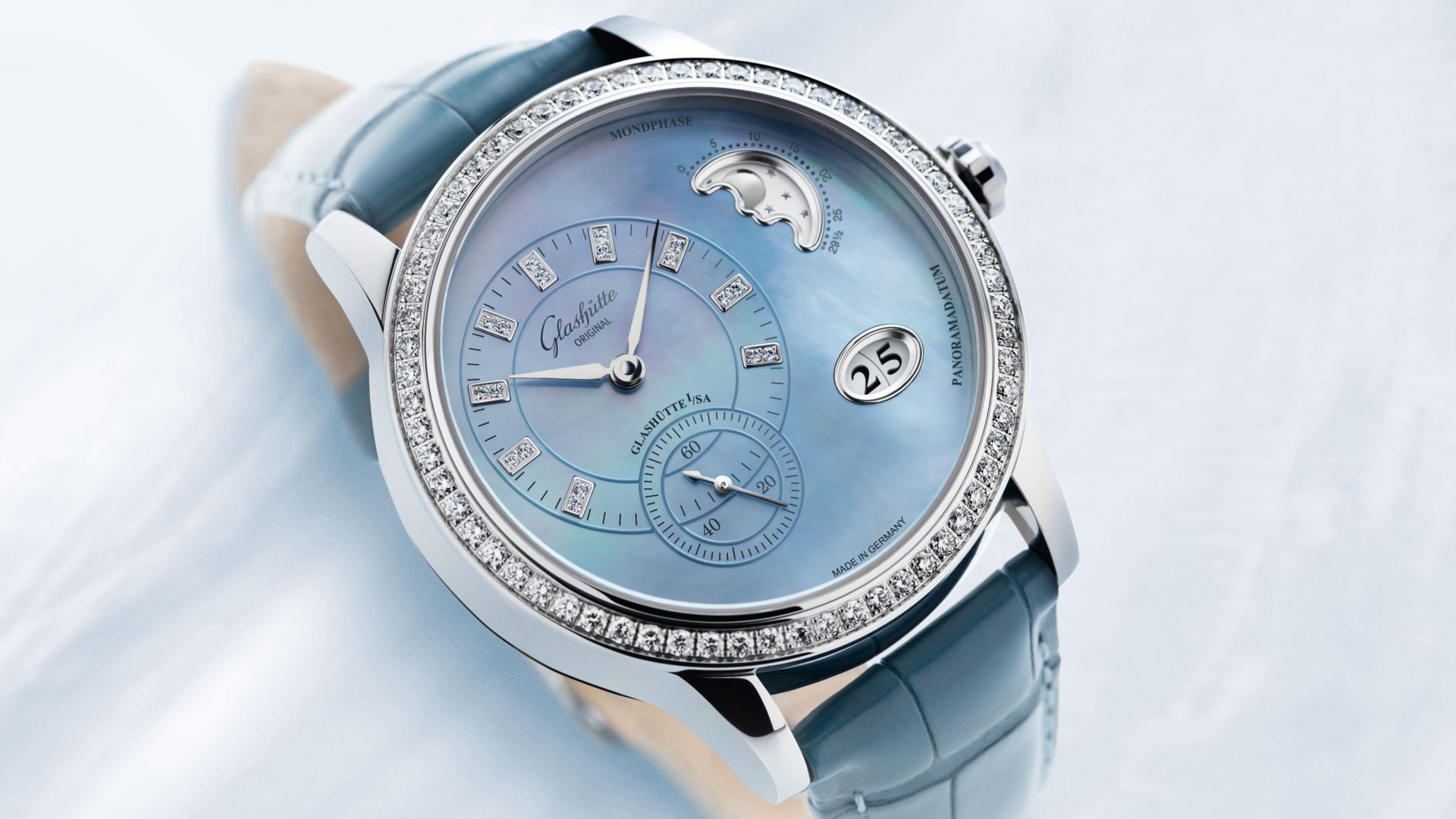 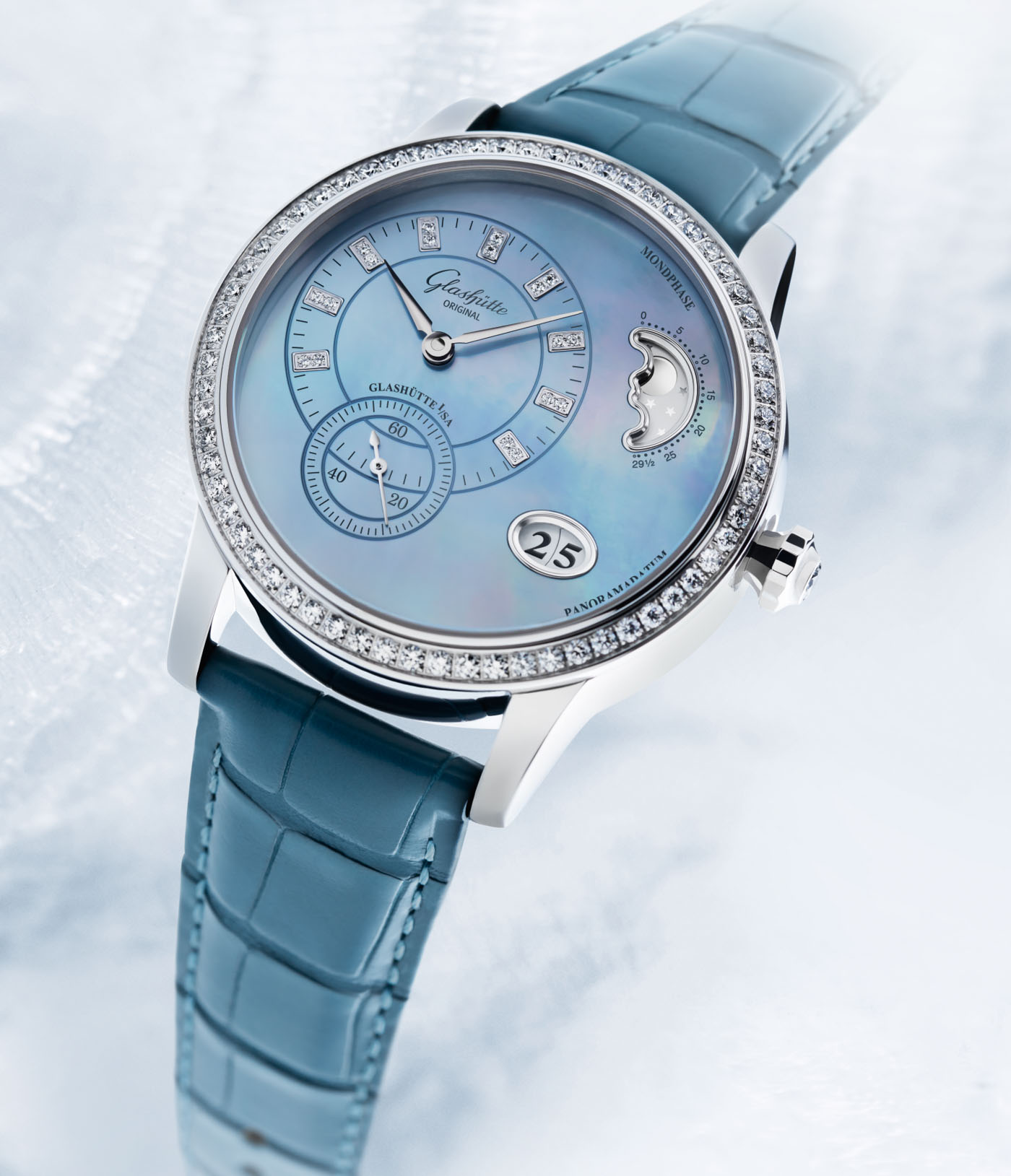 You can tell winter has come to Glashütte by the bite in the air. It’s crisp and it’s cold; the moon is rising, the temperature’s falling and the starry sky is crystal clear. At night snow begins to fall, leaving our world in glistening white, stretching out under a pale blue sky as far as the eye can see. A time for quiet contemplation. A time to dream. Wintertime is dream time. This is the scenery in which they, the watchmakers at Glashütte Original, spend their winters… Dreaming up watches! The one we are presenting to you is an absolute marvel that comes in the form of the pale blue PanoMatic Luna. 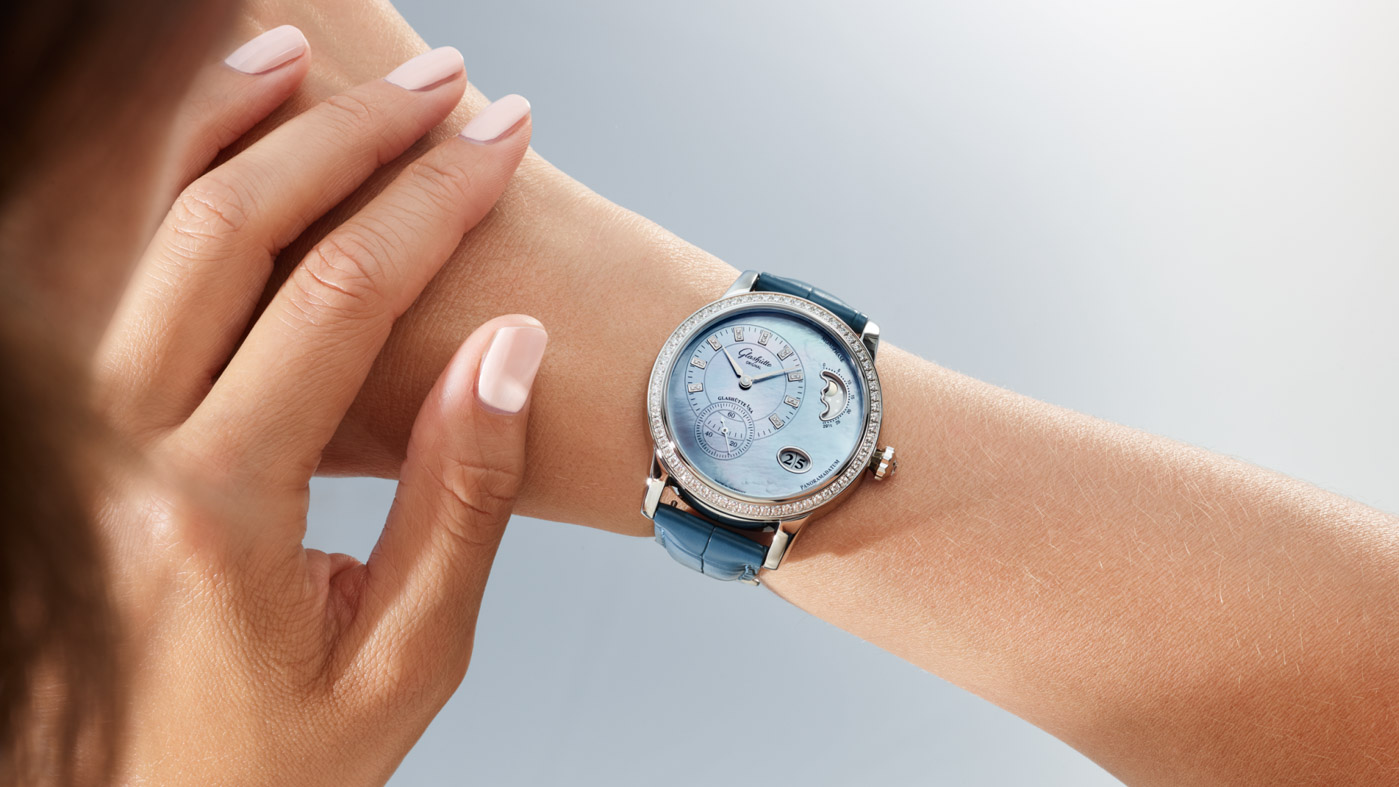 Handmade for women who love to dream, presented in a 39.4 mm stainless steel case on a gray‐blue Louisiana alligator strap… but it’s all those diamonds that catch the eye. Translucent, top‐class, brilliant‐cut diamonds: sixty‐four on the bezel surrounding the dial, eighteen mounted in pairs to mark the hours from eight through four, and one more capping the crown. Eighty‐three sparkling stones on the wrist, 1.09 carats in all – a dream constellation inspired by the light and the brilliance of the stars.

Something else about the light under a pale blue sky: it’s a clear winter light with a shimmering presence. It has to do with the colors, not just the sparkling white light of the diamonds. There’s a touch of iridescence, of pink, lilac, green and white in the sky. This light and these colors are not a matter of chance. The watchmakers have let the magic of winter inspire them here, too: the dial is hand‐crafted in pale blue mother–of–pearl. 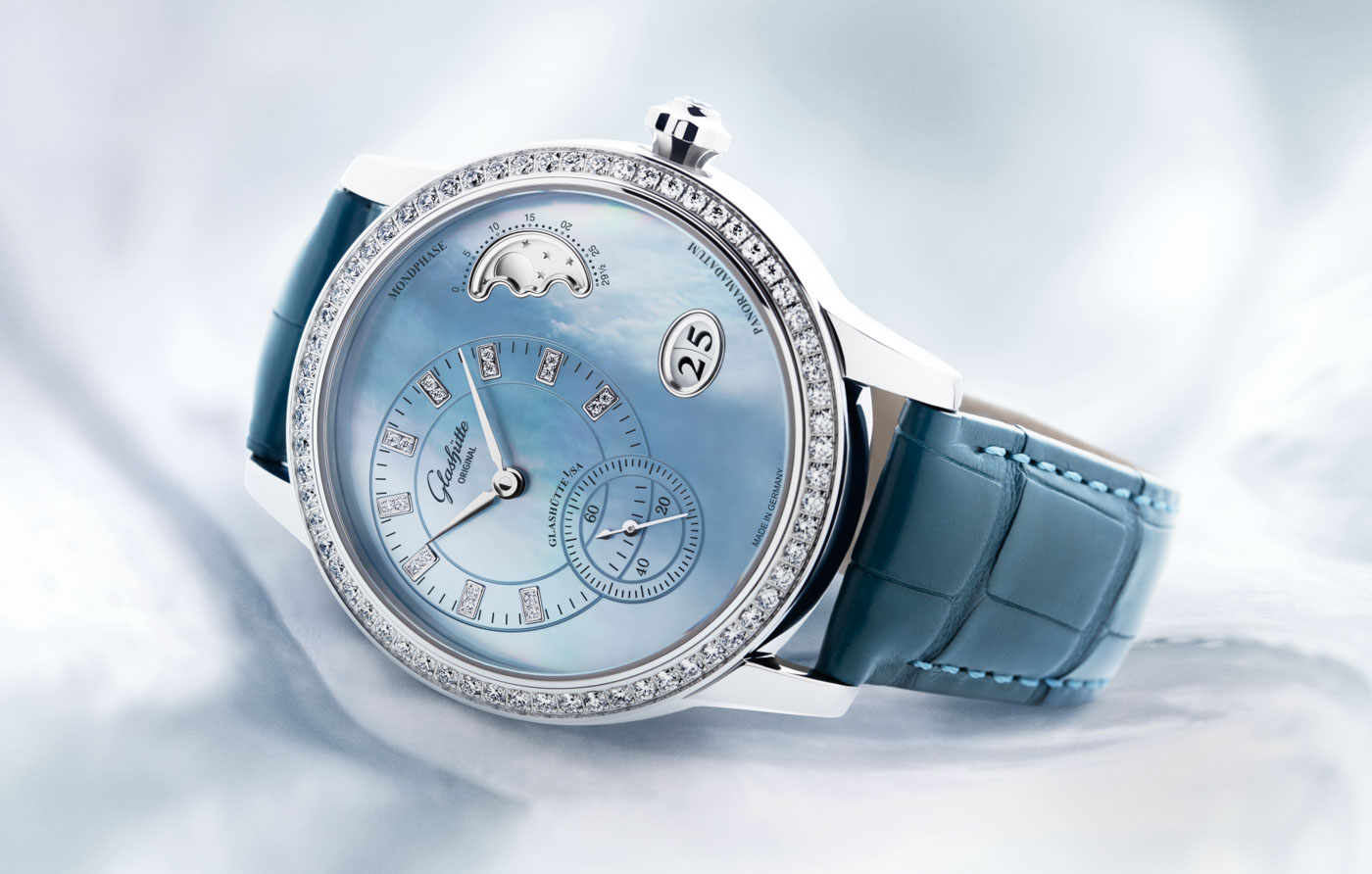 A Dial In Mother-Of-Pearl, All Produced In-House

Harvested from seashells, mother–of–pearl is both exquisite and temperamental at once. Its subtle reflections in pastel hues render it precious, but it is notoriously difficult to work with, so fragile that it demands extreme care in handling during its passage from shell to razor thin, finished dial.

As one of the very few prestige watchmakers with its own dial manufactory, Glashütte Original benefits from the expertise of a dedicated team of dial makers in Pforzheim, Germany, a city long known for its craft traditions, goldsmiths and jewelers. The rare skill of the watchmaker’s artisans – scientists, artists, and precision engineers at once – is evident at first glance: in the mirror‐like surface of the PanoMatic Luna’s wintry blue, mother‐of‐pearl sky. In the delicate pairing of brilliant‐cut diamonds serving as indexes on the off-center hour and minutes dial, in the ring of diamonds circling the bezel and the single stone atop the fluted crown: the dial is a blaze of crystalline light. 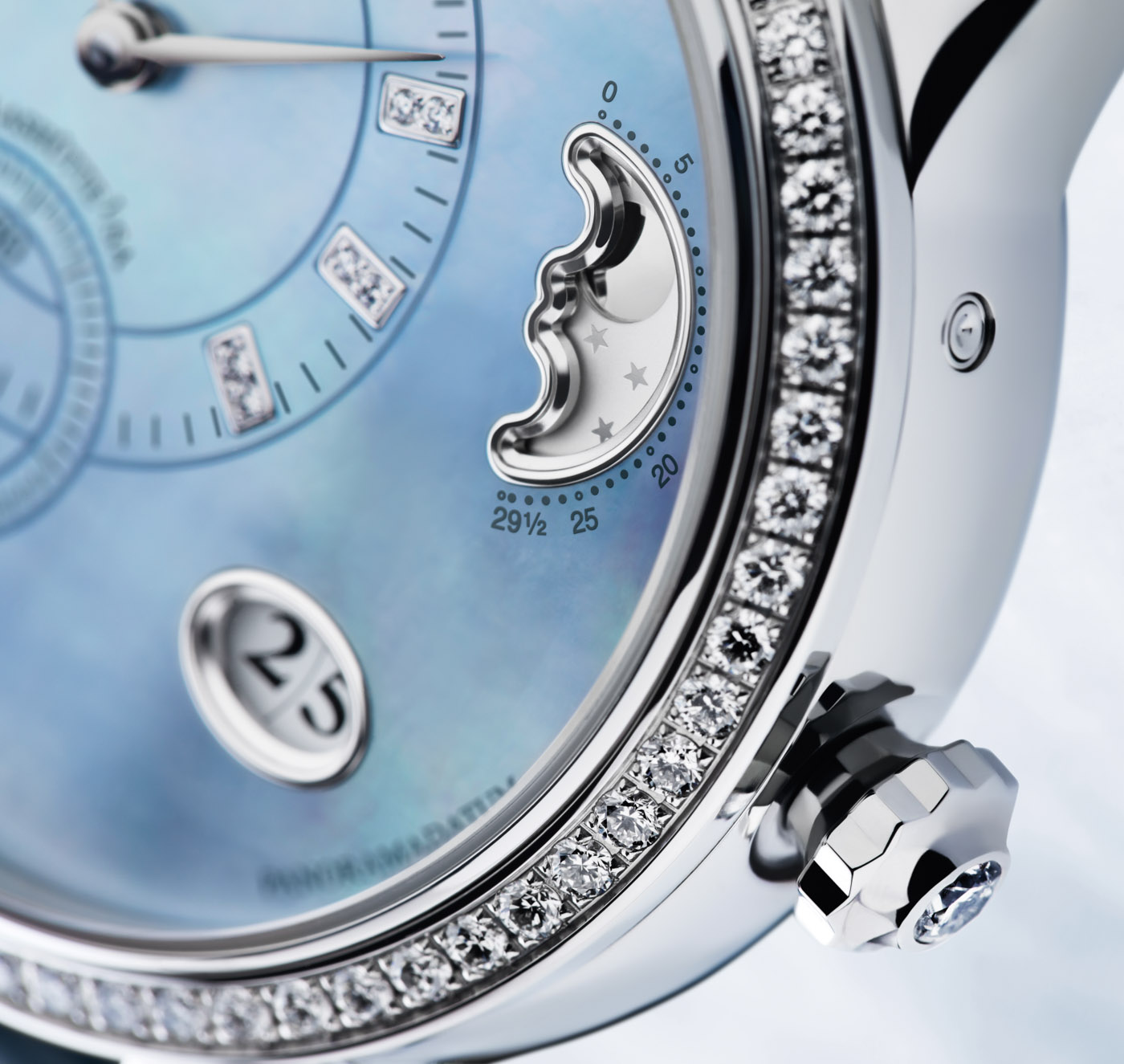 An Especially Beautiful Phase Of The Moon Indication

But there is more to discover about this winter light. Nothing in this feminine landscape has been left to chance, least of all the name: Luna. It’s no surprise to find the mirror‐polished moon shining a light of its own in a starlit sky. A moon in silver grows to a crescent and to full white brilliance, only to fade and disappear: the effect is hypnotic, mysterious, elemental. Behind the silver moon and stars lie the traditional craft skills not only of the dial makers but of the precision engineers and watchmakers who designed and built the engine that breathes life into the Luna.

The various phases of the moon in the night sky are represented by the galvanic white disc decorated with small stars in conjunction with two small curves that jut into the half‐moon cutaway on the dial. The disc, turned by the dial train, carries not one, but two domed silver moons, only one of which is visible at a given time. In the upper half of the display, one of these becomes increasingly visible as the nights pass, finally reaching “full moon” in the center of the window. Further rotation of the disc pushes the silver moon slowly under the opposite section of the dial as this silver satellite wanes and eventually disappears. While this takes place, the second “full moon” on the disc beneath the dial has traveled the same distance along its orbit, ready to become the next waxing moon. 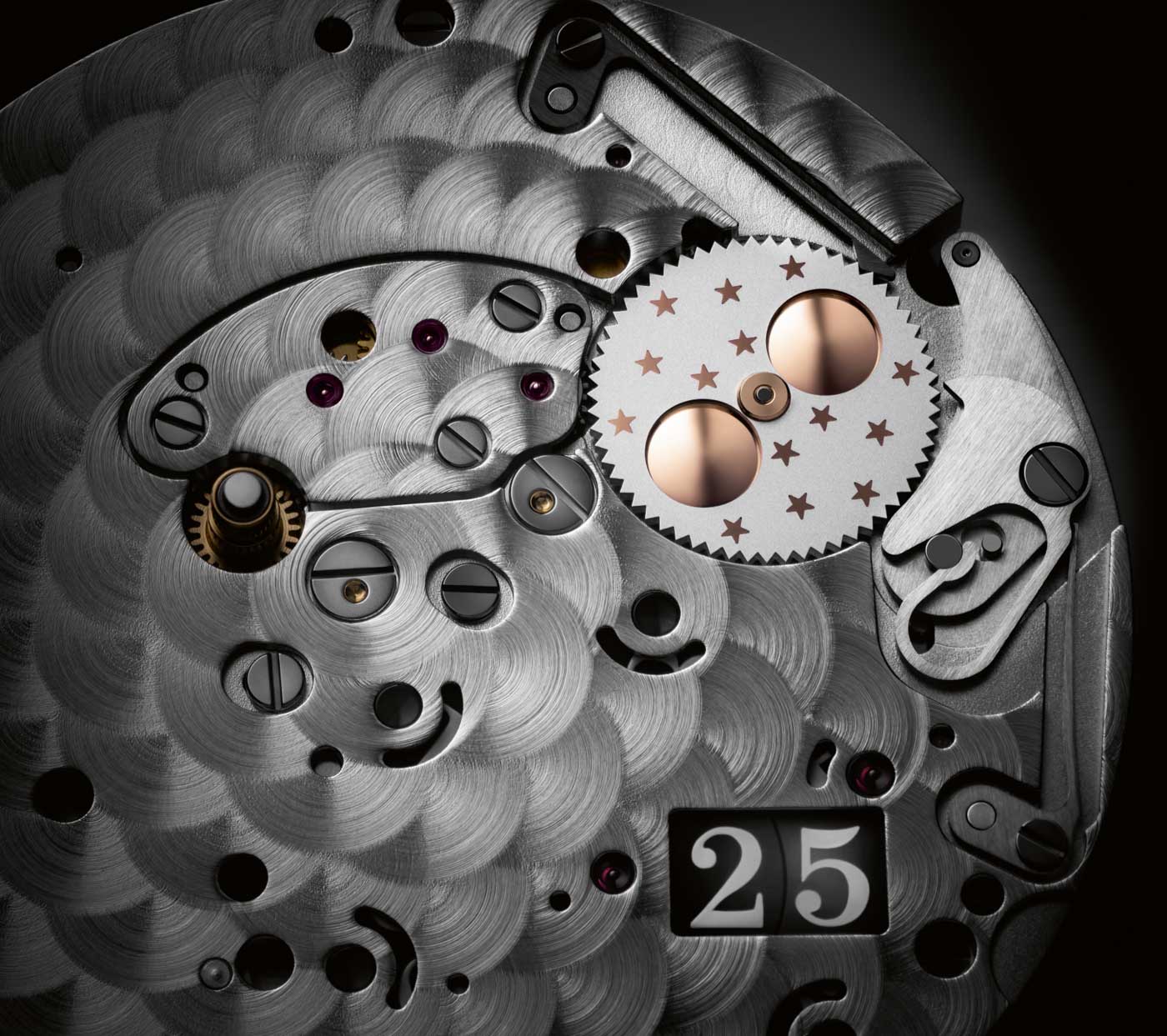 The moon disc beneath the cut‐away window makes one revolution every 59 days, not quite two months. This is because one lunar month – the period from one new moon to the next – lasts precisely 29 days, 12 hours, 44 minutes and 2.9 seconds. This is known as the “synodic moon month”, represented by the time scale running from “0” to “29 1⁄2” days. The 59‐day revolution of the moon phase disc isn’t completely in sync with the precision timing built into the universe, since two synodic months add up to 59 days, 1 hour, 28 minutes and 5.8 seconds – but it is very close. In a proud indication of its origins, the PanoMatic Luna presents the name of this delightful complication in German: “MONDPHASE”, printed in black at the perimeter of the dial.