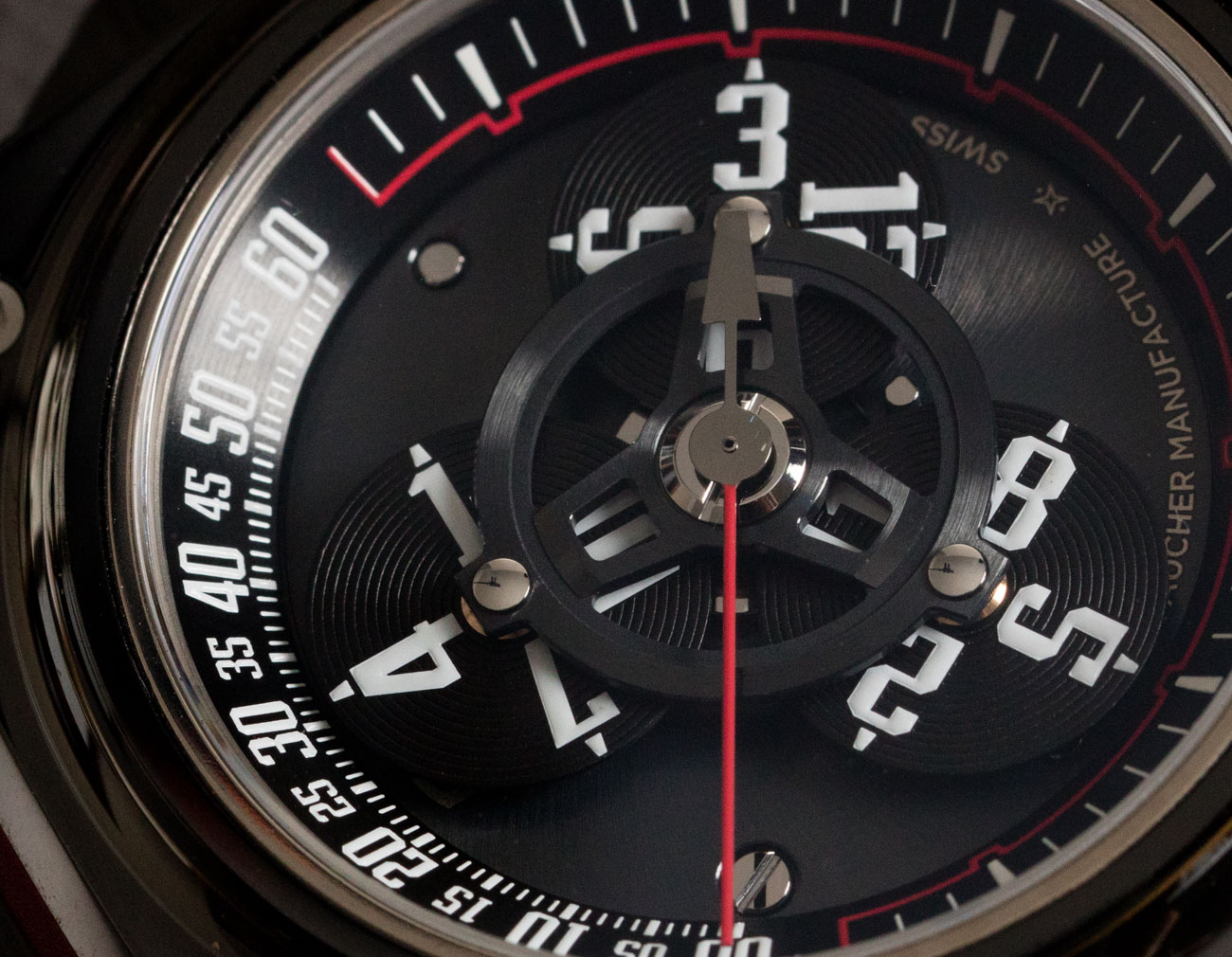 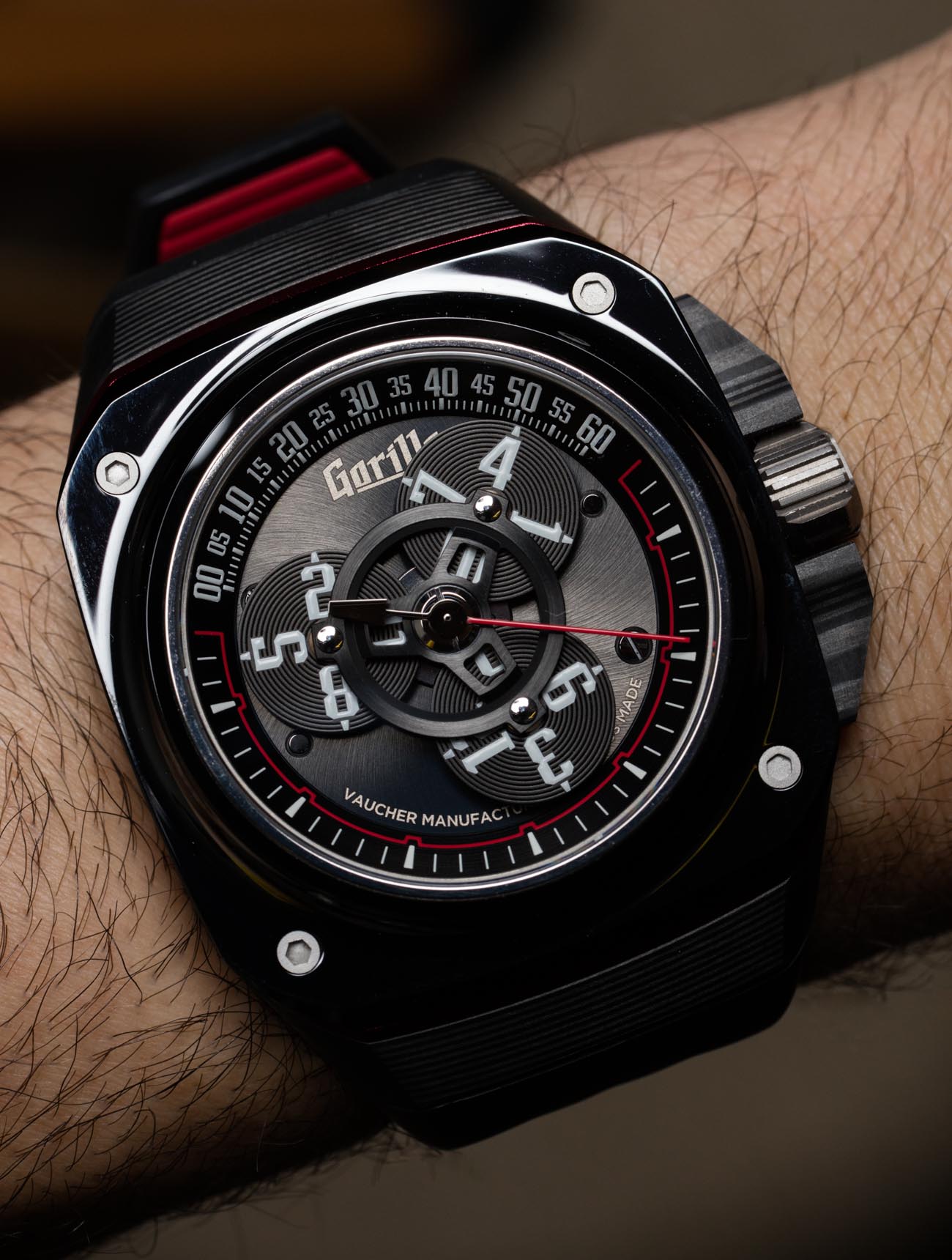 With the Fastback GT Drift product (Gorilla Drift, for short), we finally see Swiss Gorilla watches maturing into a brand for collectors that its founder, Octavio Garcia, always wanted it to be. In development for some time now, the Gorilla Fastback GT Drift uses a bespoke mechanical module fitted over a base Swiss automatic movement, which creates a “star-wheel” style display for the face, combined with the Fastback GT-style case that now defines the Gorilla brand. This is the Gorilla watch I’ve been waiting for and — even though it is appreciably more expensive than the more basic Gorilla timepiece still available — it is a relative bargain compared with other watches on the market that have star-wheel-style displays (which are quite rare).

Garcia says he’s wanted to develop a new star-wheel watch since he worked as a designer for Audemars Piguet. “Star wheel” is the name of a particular vintage Audemars Piguet product which has a similar time display. As I understand it, this method of telling time predates the 20th century. Modern high-end luxury watchmaker Urwerk incorporated this same system for telling the time in most of its timepieces, with different nomenclature such as “satellite time system” to describe the mechanism. Gorilla simply calls it “wandering hours,” which is yet another term used to describe this effective and visually pleasing method of telling the time.

Watch designers, perhaps even more than collectors, are enamored with the idea of creating timepieces that are able to tell the time, but that don’t use the traditional circulating two- or three-hand dial, which the vast majority of watches rely on. The market has countless experimental or alternative ways of indicating the time. Most of them require more time and mental effort to read the time, or simply aren’t very attractive. Digital watches, for example, are the easiest timepieces to read, if you just want to know the time quickly, though most people agree that an analog watch dial tends to look more “sexier” than a digital one.

What makes wandering-hour dials so special is that reading the time is actually quite simple and very fast, perhaps even faster than reading the time on a traditional 12-hour dial. This is because your eyes need to move fewer places in order to get the information they need. The only downside of most wandering-hour watches is that you need to have relatively good eyesight to read them. Provided you do, being able to look at the current hour digitally, and then move your eye just a small distance to see where it is along the minute track, allows you to read the time with incredible speed. 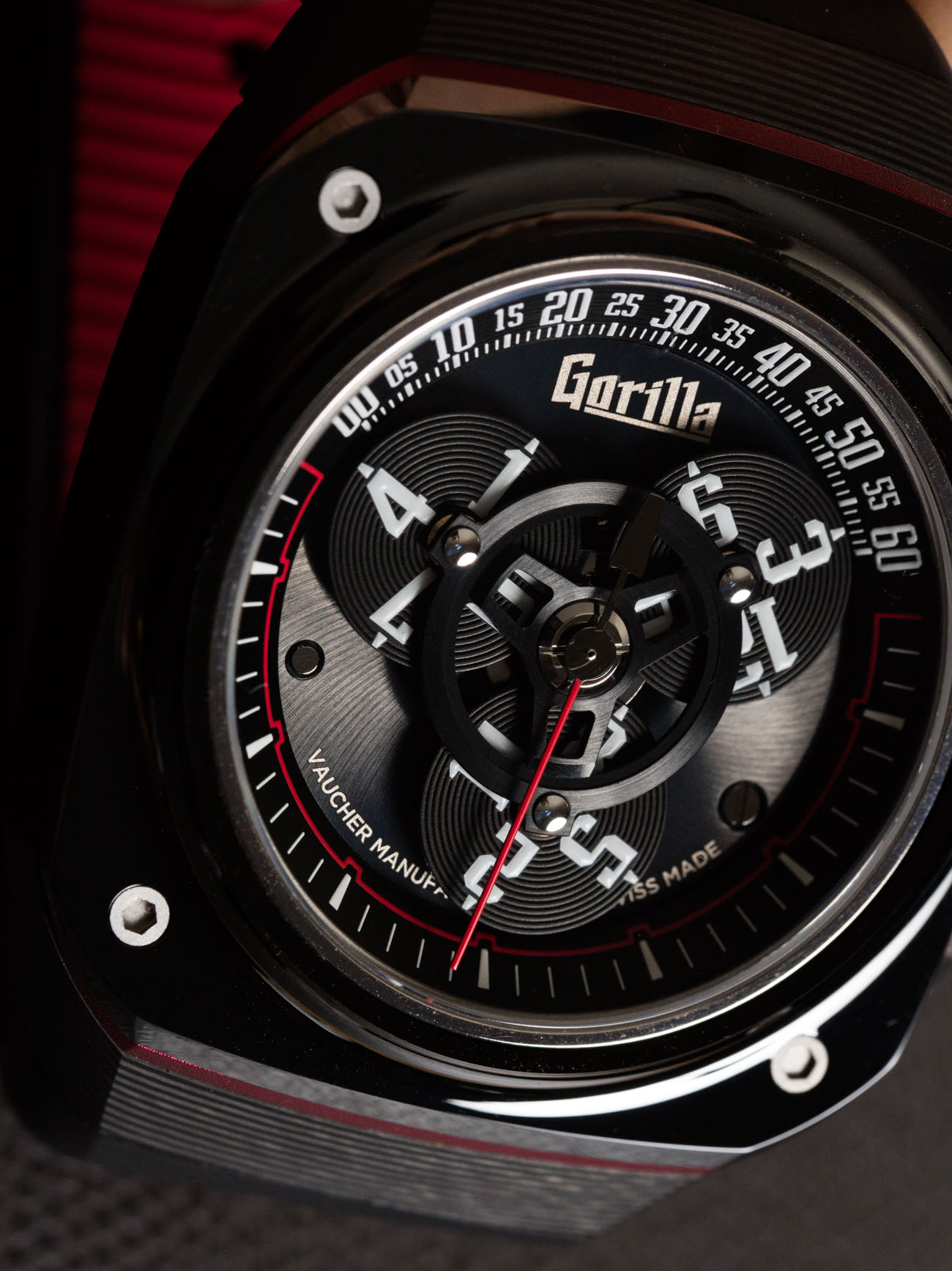 The Gorilla Drift uses the top of the dial to indicate the time along the semi-circular minute track. The rest of the dial doesn’t need to be viewed unless you are following the path of the central seconds hand. Other wandering-hour watches use the bottom or sides of the dial for the minute tracks, though where this scale is placed on the dial is simply a matter of taste and design. An open view of the three “hour satellites” isn’t functionally helpful, but it adds to the aesthetic interest of the symmetrical design. This is where the Gorilla Drift gives the wearer that welcome sense of mechanical art collectors appreciate in fine watchmaking.

I’ve worn wandering-hour watches in the past, including the Audemars Piguet Star Wheel, many Urwerk watches, and the Arnold & Son Golden Wheel. There might be other, less expensive, versions out there, but I am not aware of them. This leads me to say that the Gorilla Drift, at around $3,000, is by far the most affordable among the current choices. The Arnold & Son Golden Wheel, for example, is nearly $50,000, and the vast majority of Urwerk watches are priced well above that. On a basic level, the Gorilla Fastback GT Drift is the most affordable quality wandering-hours watch on the market — and for collectors fascinated by this complication, I consider the Drift to be a bargain. 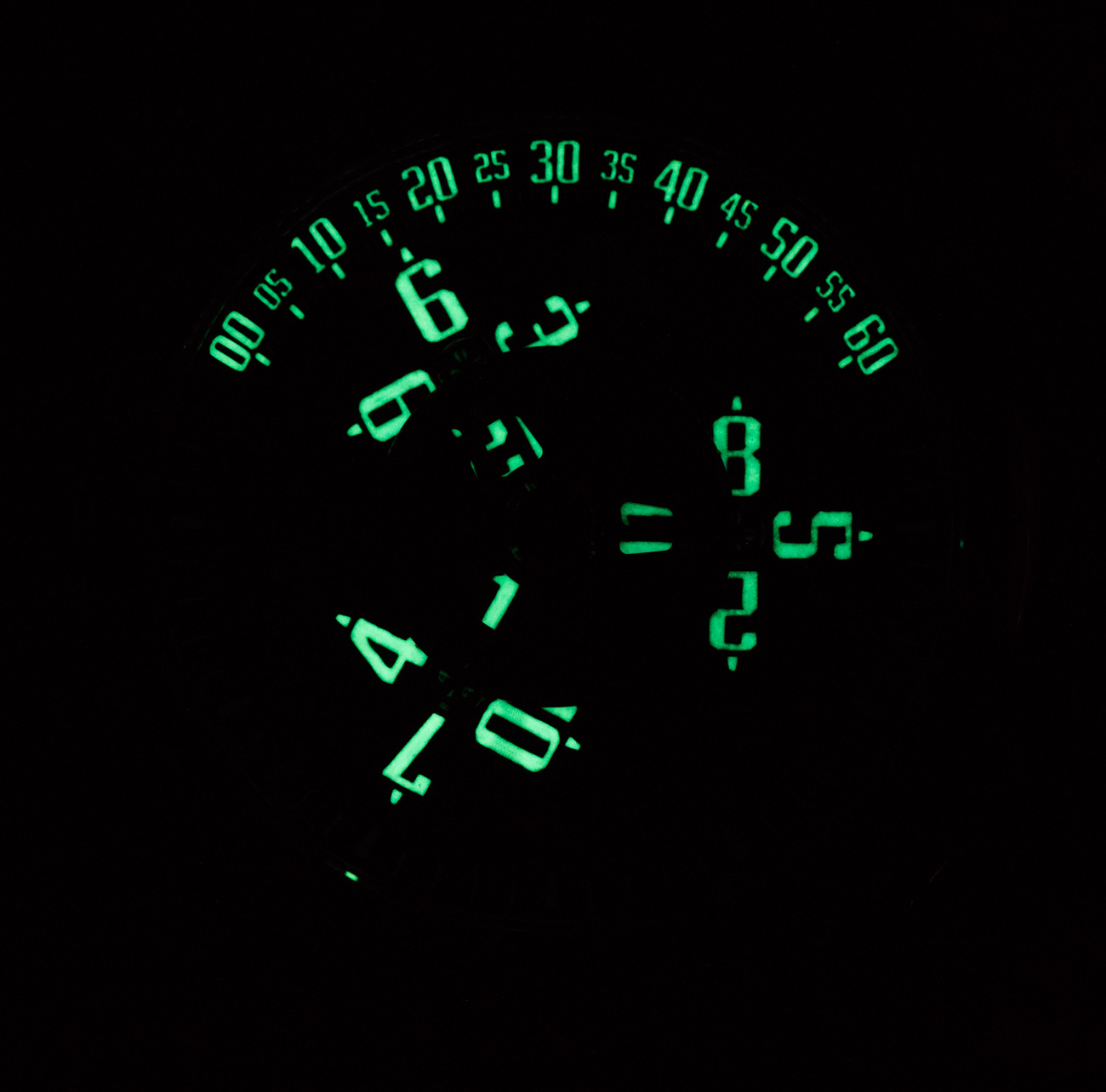 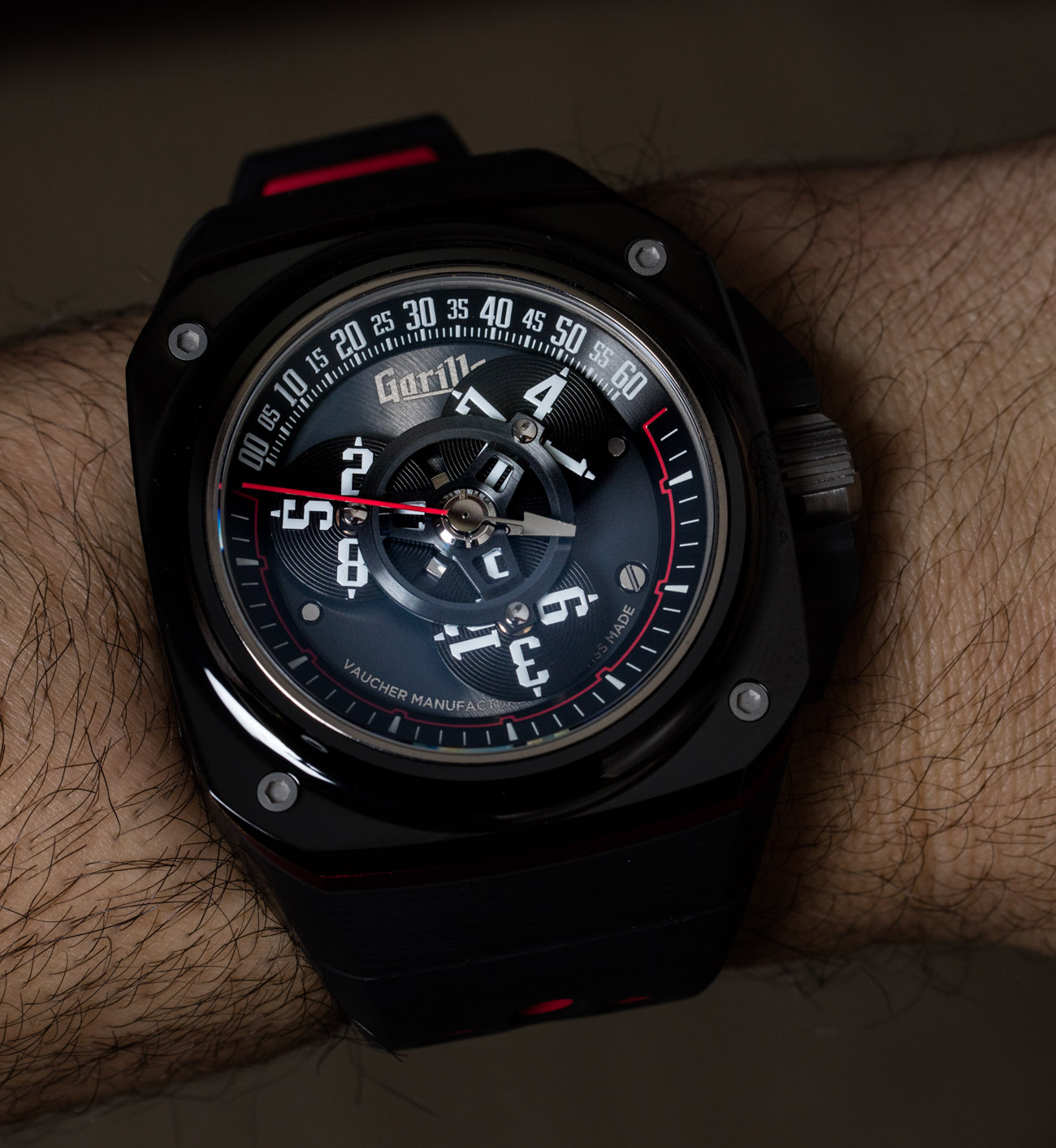 To develop the Drift, Gorilla worked carefully with Manufacture Vaucher, a very important producer and developer of watch movements (not to mention entire watches). Vaucher movements can be found in brands such as Parmigiani, Richard Mille, and Hermes. It certainly makes sense that Gorilla would want to proudly print “Vaucher Manufacture” right on the dial of the watch. This is also one of the few public collaborations between Vaucher and brand (most are private) in which the relationship is memorialized on the watch, itself. Vaucher is an excellent company (among a few of its type in Switzerland) and Gorilla was correct that openly working with them certainly increases the perceived value of the product.