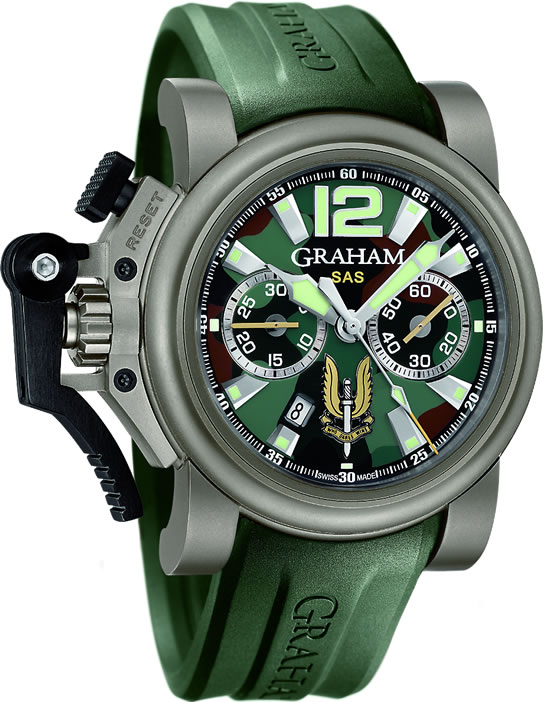 People go crazy over Graham watches. Especially the Chronofighter series. The trendy English watch maker has some very appealing designs, and I can personally attest to the fact that the build quality of these watches is very good. The Chronofighter series of watch is typified by a unique chronograph pusher system, and apparently is easier to use. It is easier to put, being trigger like, which helps as they are on the left side. The crown has a pusher built in to it, which is depressed by the trigger. The top pusher is the reset button for the chronograph, but you knew that because it says so on the watch.

This particular model is the “Chronofighter Oversize Titanium SAS.” You can ignore the oversize part. I hate use of the term. See my article on “oversized” here. The watch is 47mm wide. Oversized would imply it was 47 inches wide. That actually would be oversized. The fact that it has “titanium” in the name, would imply that it is titanium, which it is. A trait that makes this watch on its green rubber strap impossibly light feeling. Inside the watch is a modified automatic ETA Valjoux 7750 movement known to be the Graham G1734. Basically, it dispenses with one of the dials making this a 30 minute chronograph. Bicompax chronographs (two subdials) are arguably more attractive that that standard three subdial layout of the Valjoux 7750, but 12 hours of functionality are sacrificed, allowing for a mere 30 minutes of counting. 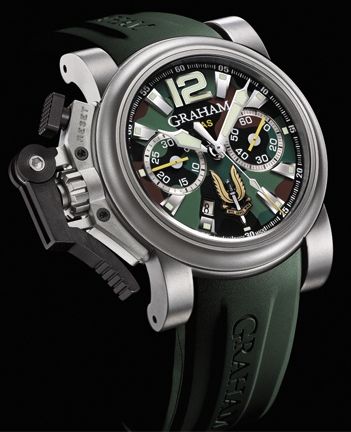 Being a British company, Graham probably wanted the change to create a watch homage to the SAS (Special Air Service). This Air Force like branch of the English military was formed during WWII to fight against the Germans, and the icon emblem lives on, being featured on the dial of the watch. This watch is also a limited edition of only 300 pieces, which will likely found their way to many select stores for your viewing pleasure.

I really like how the date was incorporated in to the design. You rarely see a date window on the left side of a watch face, nice little change. I also like how it was added to an hour marker to preserve as much symmetry as possible. The camouflage on the face is stylistic in fashion, being modeled after a traditional camouflage look, not the tighter design we see in today’s military. This could never be a stealthy hidden watch, even on a weekend warrior. So therein lies the contradiction, a very large bold watch, with the humor to suggest it is meant to blend in with a camo face. Prices are $7500 plus, which is to be expected with this premium brand.