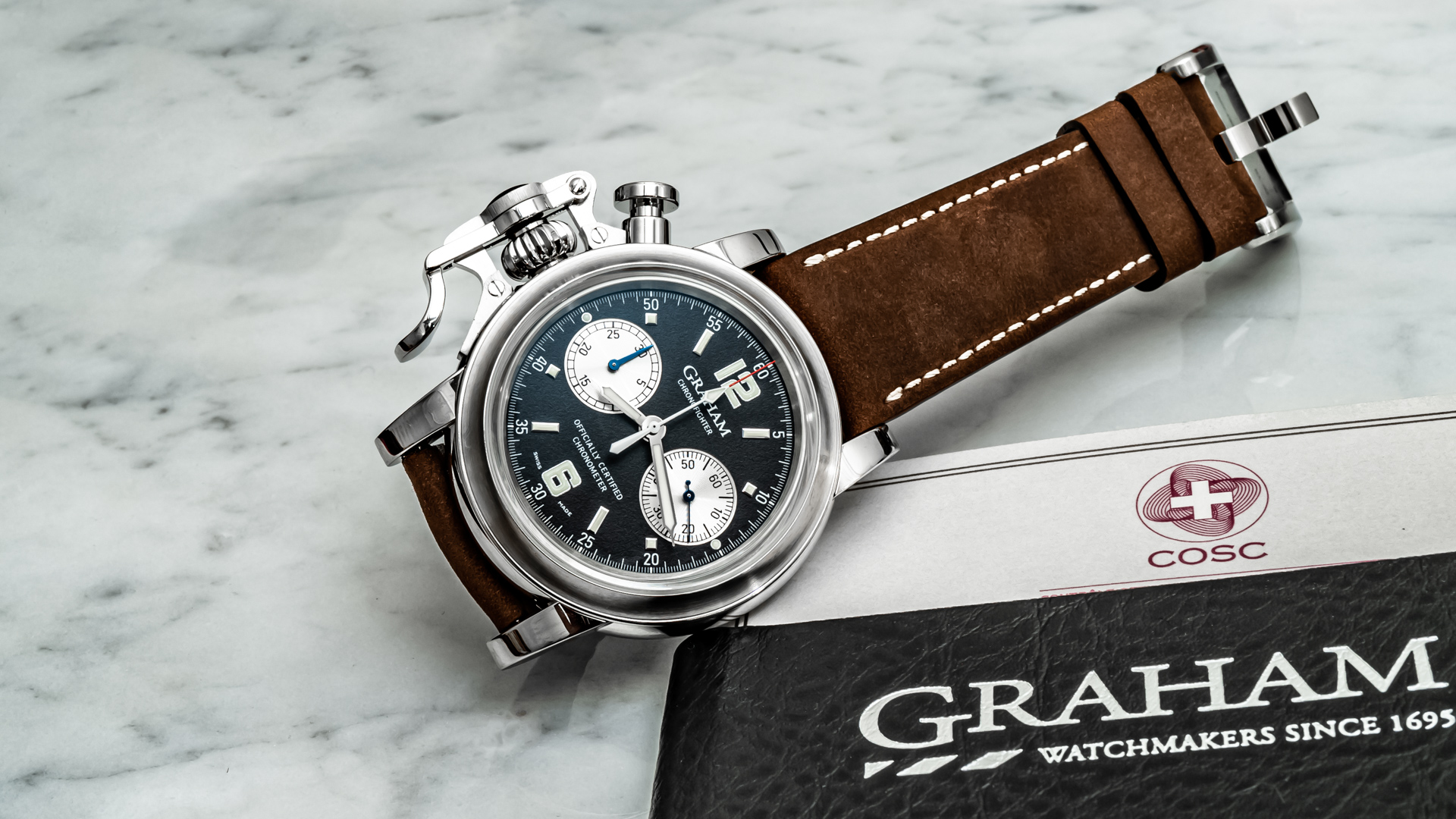 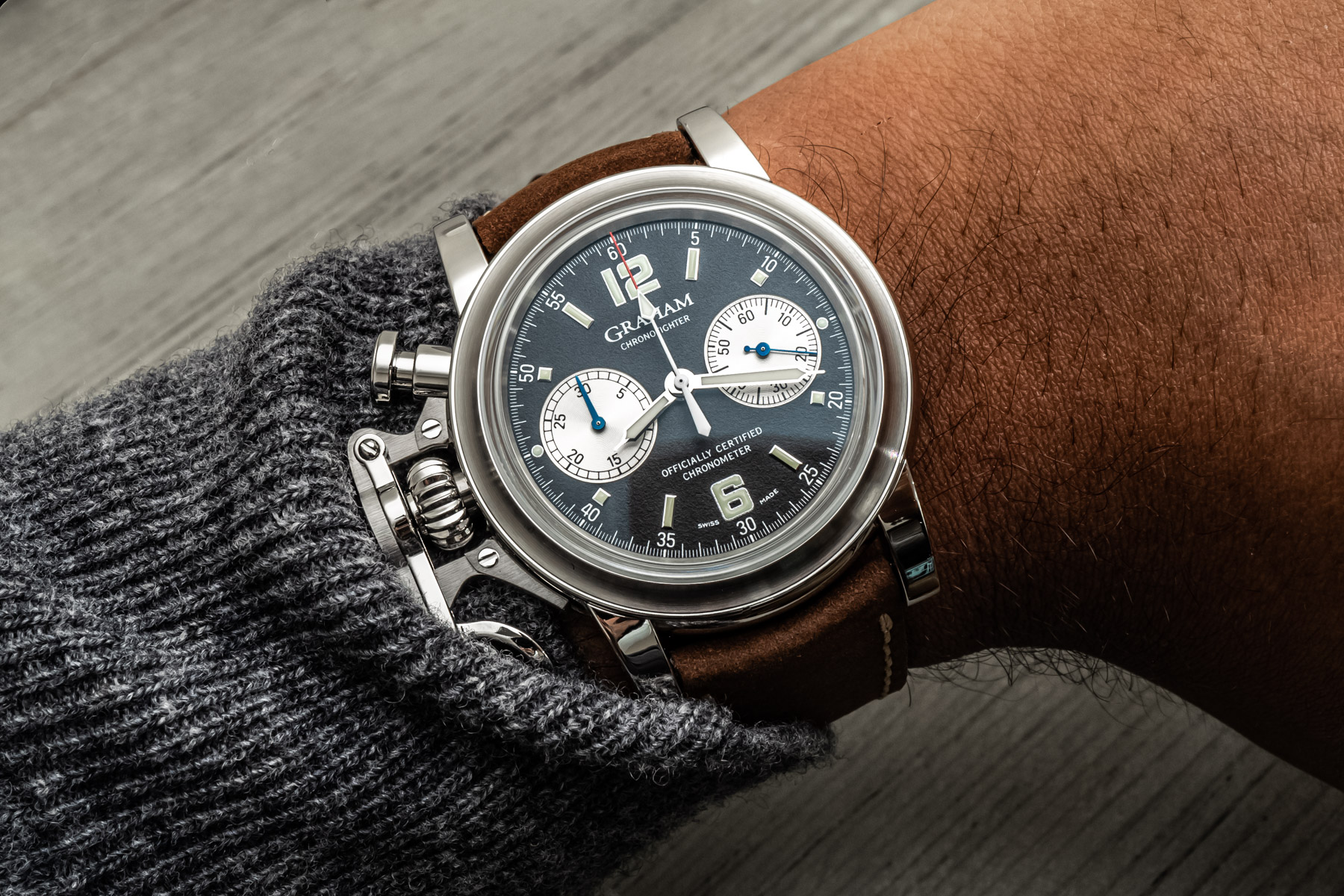 Since Graham’s founding in 1995, the brand has been most identified by and associated with its Chronofighter and its immediately recognizable chronograph trigger. To celebrate the 25th anniversary of the brand, Graham released this limited edition Chronofighter Vintage 25th Anniversary watch that also happens to be one of its most restrained and wearable pieces released in recent memory. 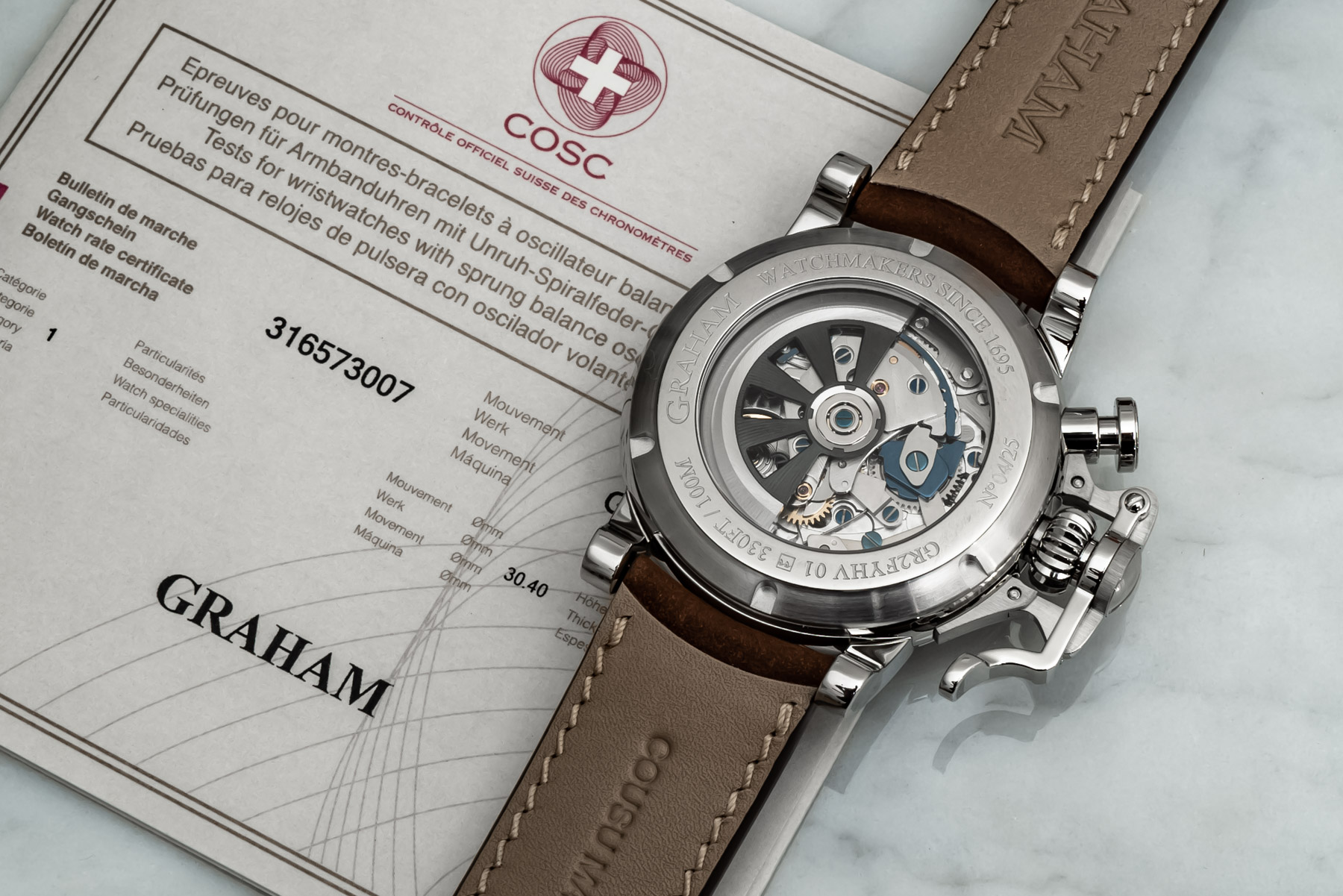 Found on the left side of the case of the Graham Chronofighter watches, the chronograph trigger is inspired by old WWII military chronographs that had a trigger system that allowed for easier operation by one’s thumb. This became a design signature of Graham’s most recognizable collection, and it’s as divisive as you think (by design). For me, the Graham chronograph trigger is a lot like the Panerai Luminor crown guard in that it can’t save a poor design but it can certainly enhance the right watch, while also helping set it apart from the competition. With a relatively conservative case size and classic dial design, I think this 25th-anniversary Chronofighter is exactly what I want to see more of from Graham. 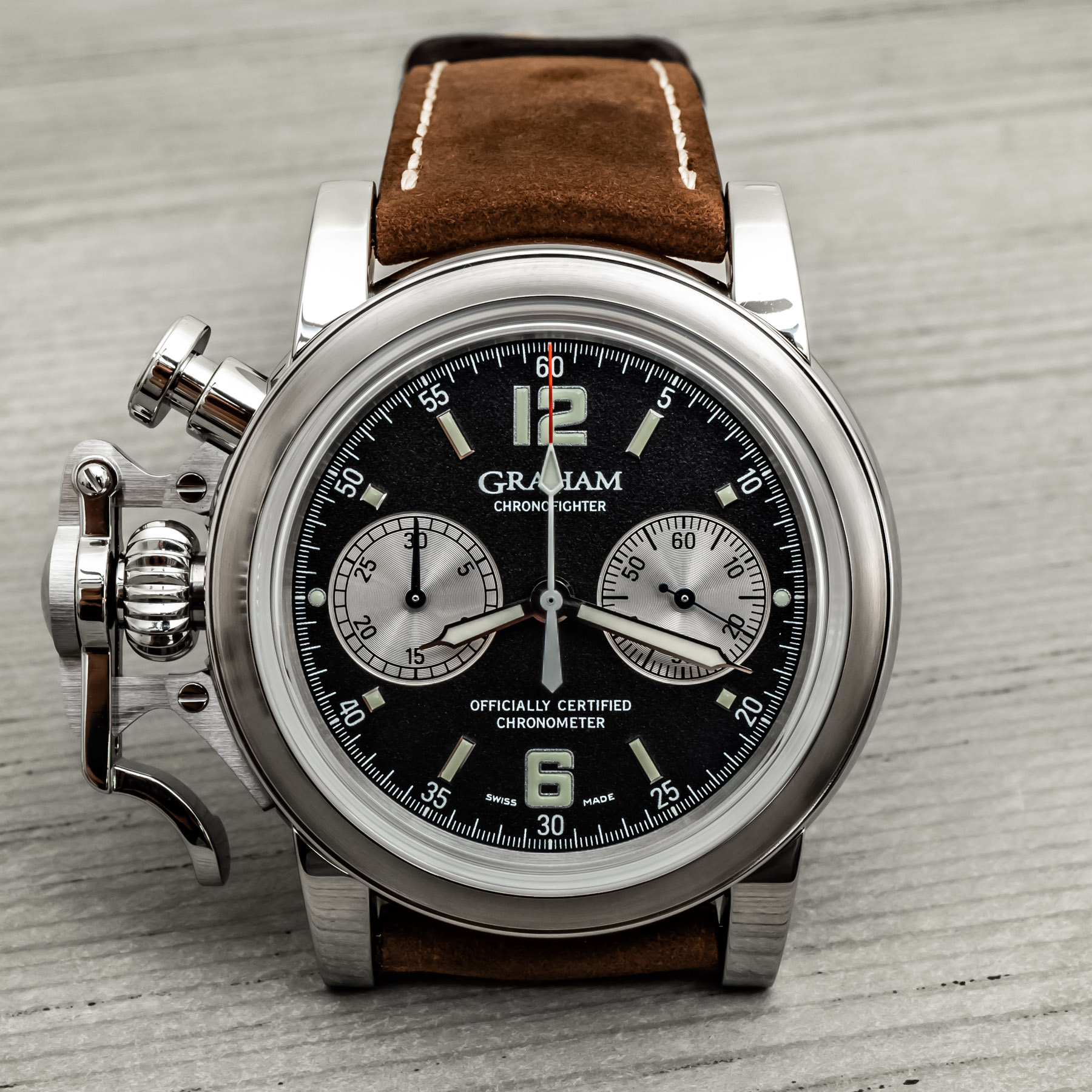 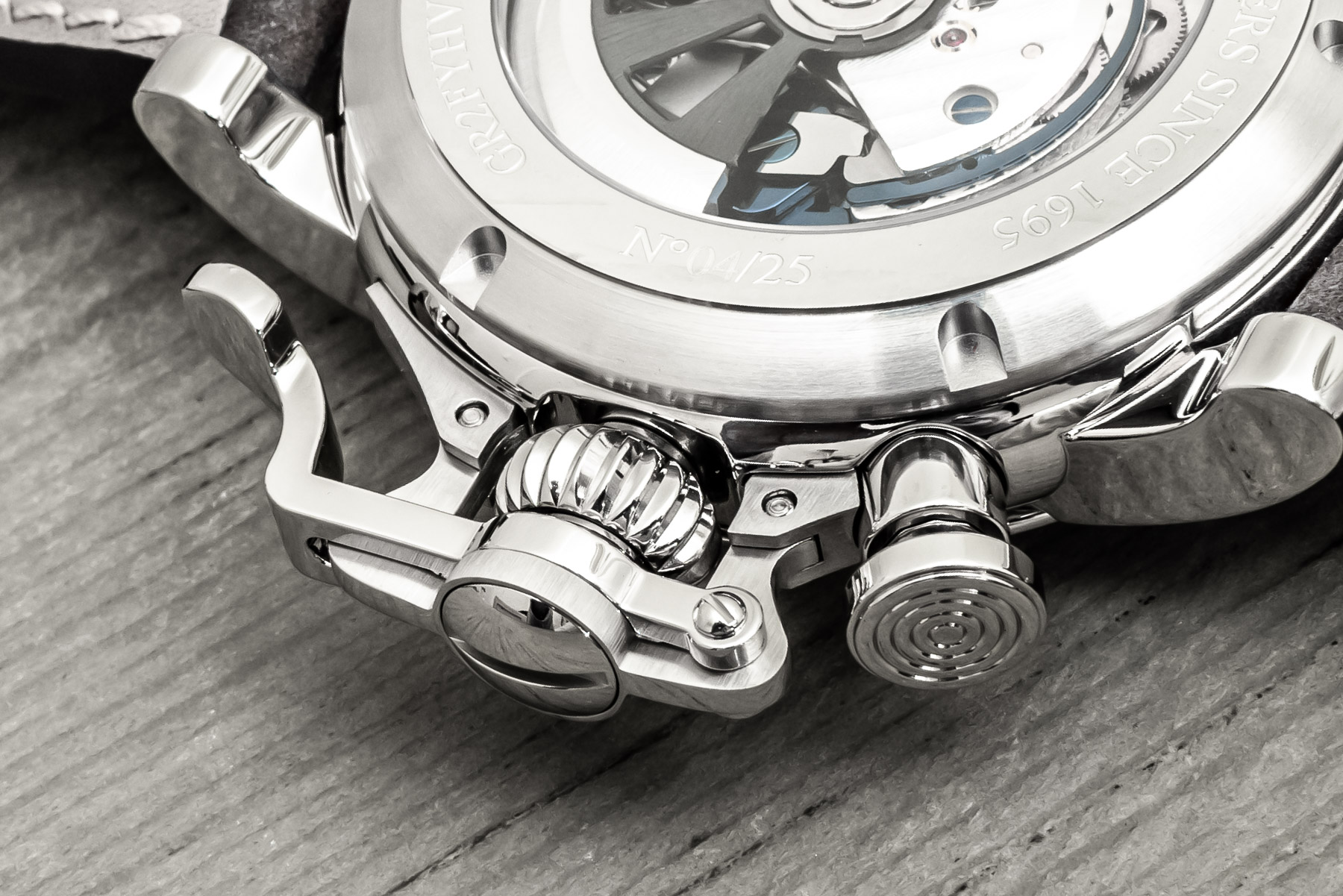 This limited edition is basically a reinterpretation of the first and original Chronofighter (some good pictures of it here). With a solid 100M of water resistance, the case of the Graham Chronofighter Vintage 25th Anniversary comes in at 44mm-wide, 15.5mm-thick (including the box crystal), and with a lug-to-lug height of 49.5mm. I find this case size to be much more wearable and manageable on the wrist than the larger 47mm case that Graham also regularly uses. Note that the original Chronofighter was actually a bit smaller at 43mm and didn’t have an exhibition caseback. I don’t think Graham produces any watches in 43mm anymore, so I didn’t expect them to produce a new case altogether (let alone for a limited run of 25 pieces). 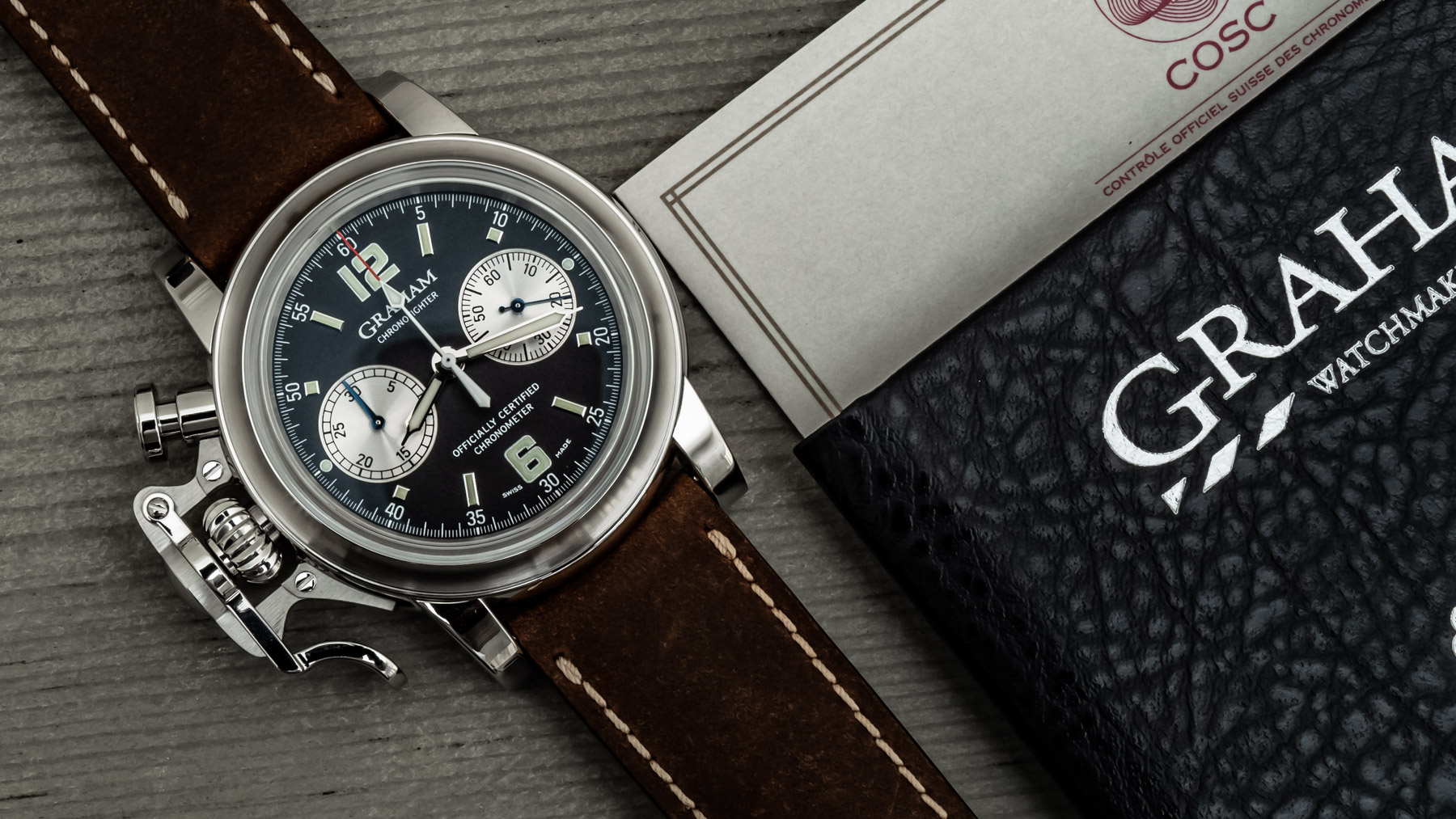 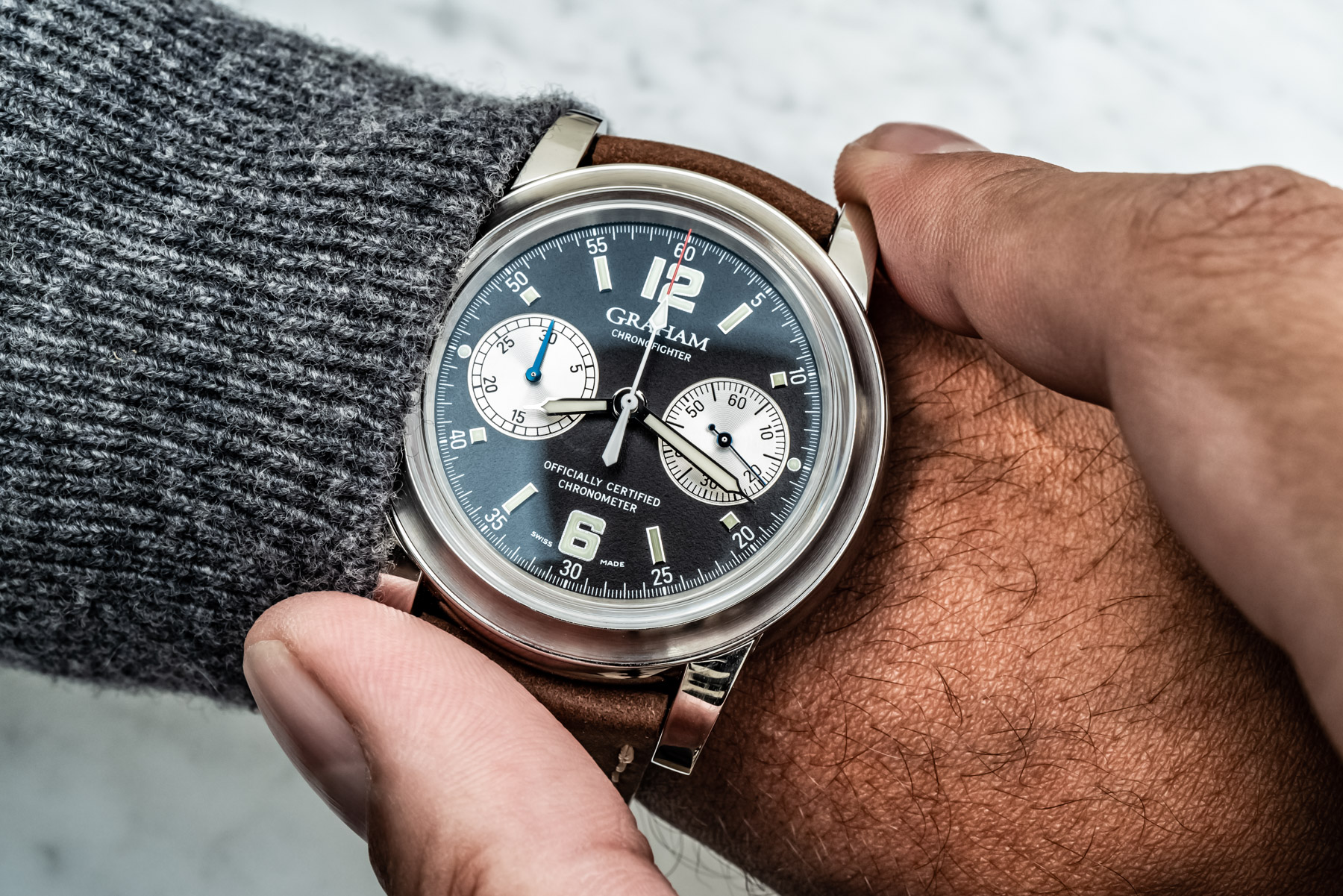 The fact that the chronograph trigger is on the left side of the case makes it so that it is essentially completely unobtrusive, and I found that it didn’t hinder wearing comfort at all. In fact, I’ve worn substantially smaller classically designed chronographs with the pushers on the right side of the case that would jab my hand with an upward movement of the wrist. I didn’t have any of that with this watch, nor with the larger 47mm case Tourbillograph. While the Chronofighter is designed to be an eye-catching piece, it can go surprisingly stealth if you’ve got a sleeve over it. When I pull my sleeve back to check the time, the chronograph trigger stayed hidden since I naturally just pull back enough sleeve to check the dial. It’s funny, but you can forget you’ve got one of these on. 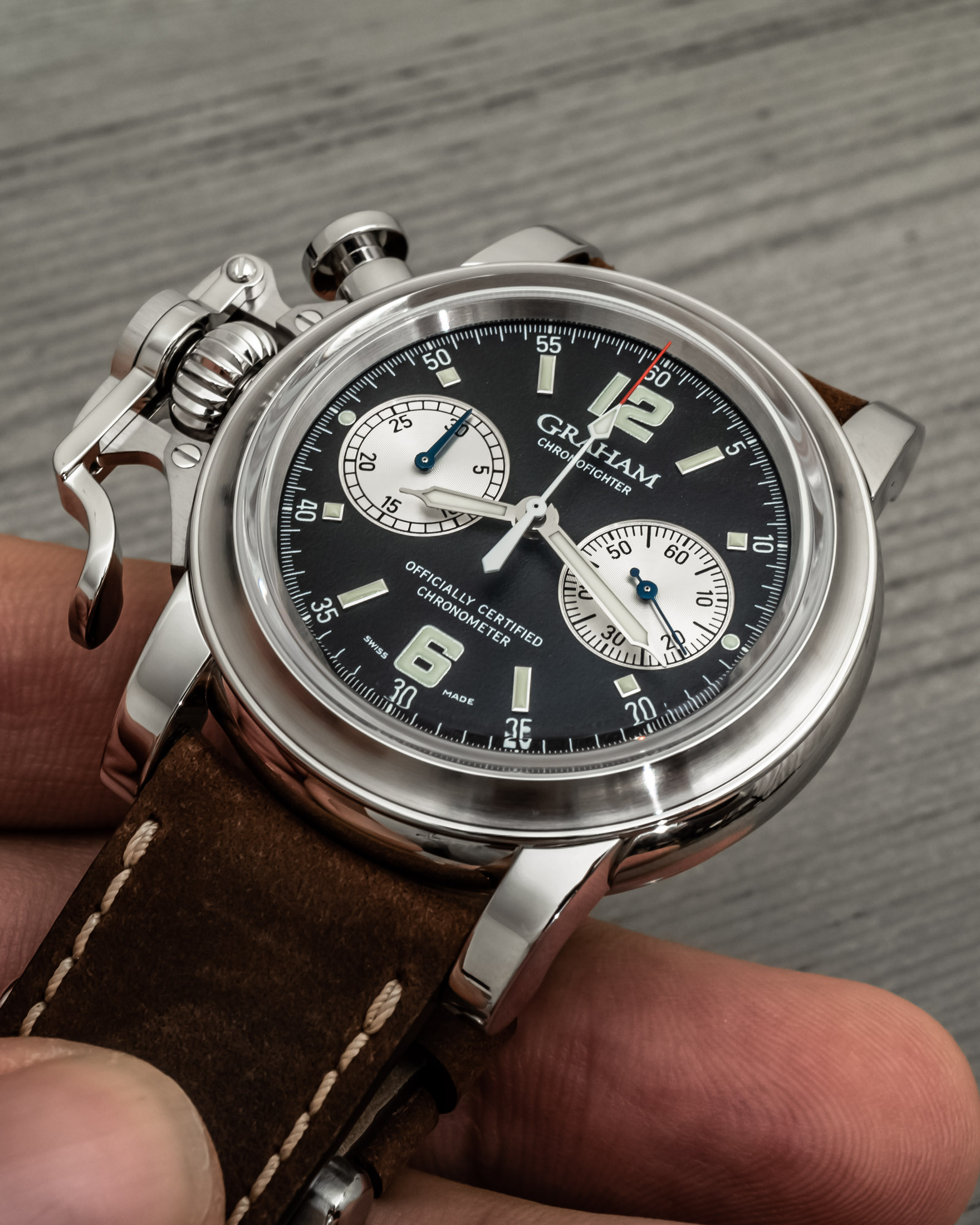 I did want to get the width of the case including the chronograph trigger, so I pulled out my trusty digital calipers and got an exact total width of 53.6mm. Given the quite reasonable 49.5mm lug-to-lug height and my aforementioned points, the watch doesn’t wear nearly as large as one would imagine. 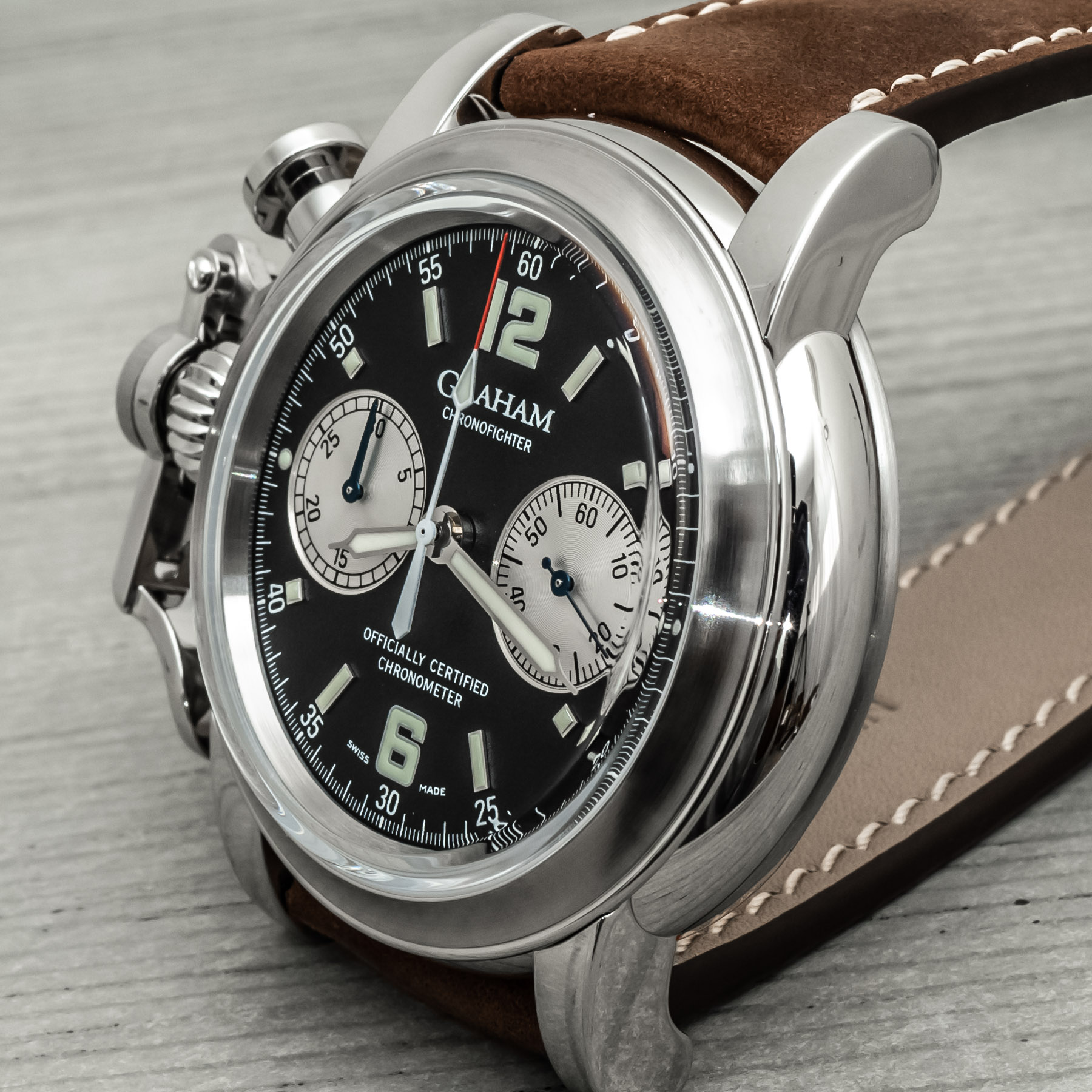 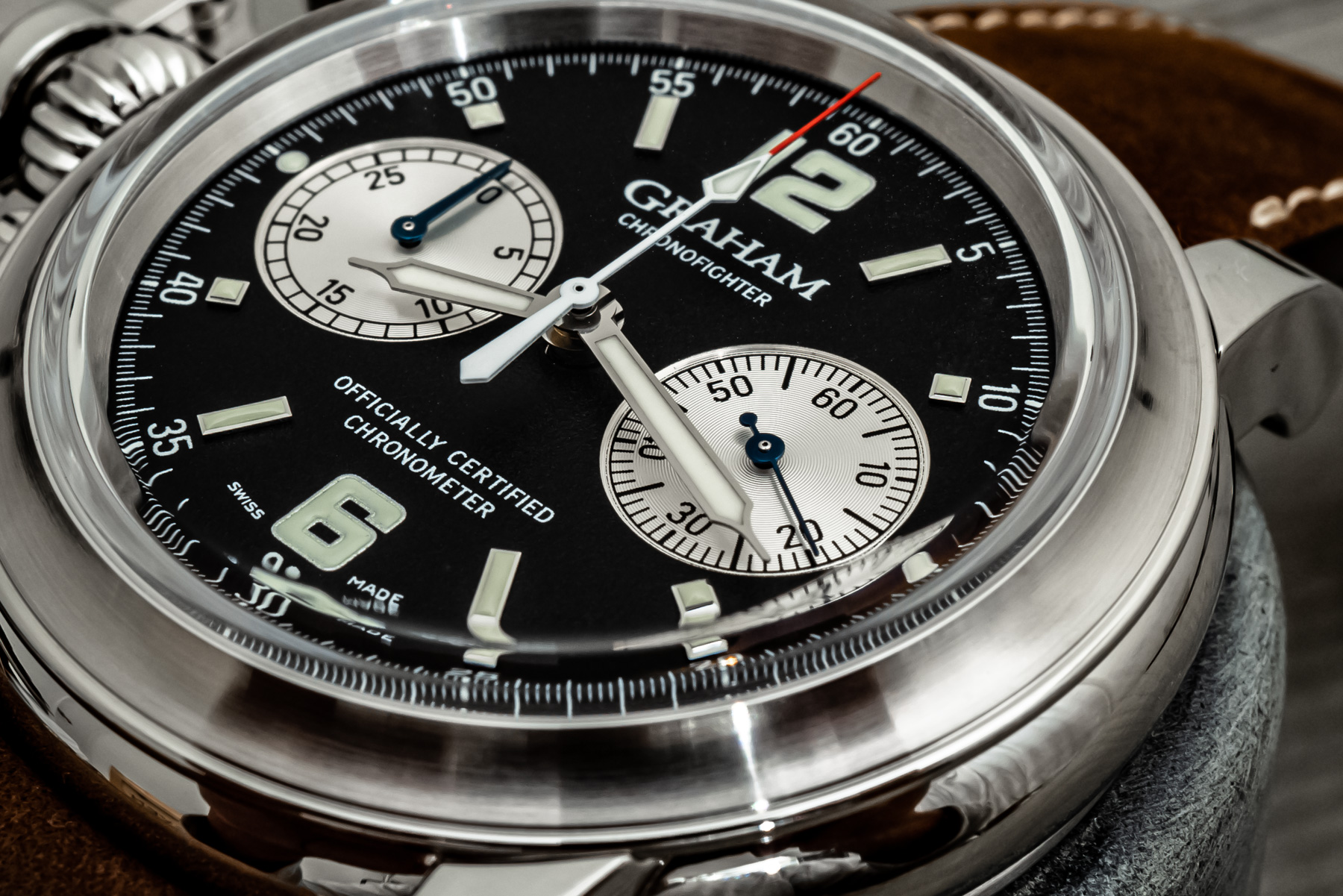 While I do wish I could trim a millimeter off the case thickness, it’s not a dealbreaker for me since a little heft befits this aesthetic. Also, the 15.5mm that I measured includes the rather thick-domed sapphire crystal with AR coating over the dial. With that point in mind, the dial is highly legible and easy to read without any glare. Of course, the hour, minute, and chronograph hands, as well as the hour numerals/indices, are finished with a healthy application of lime-green lume. 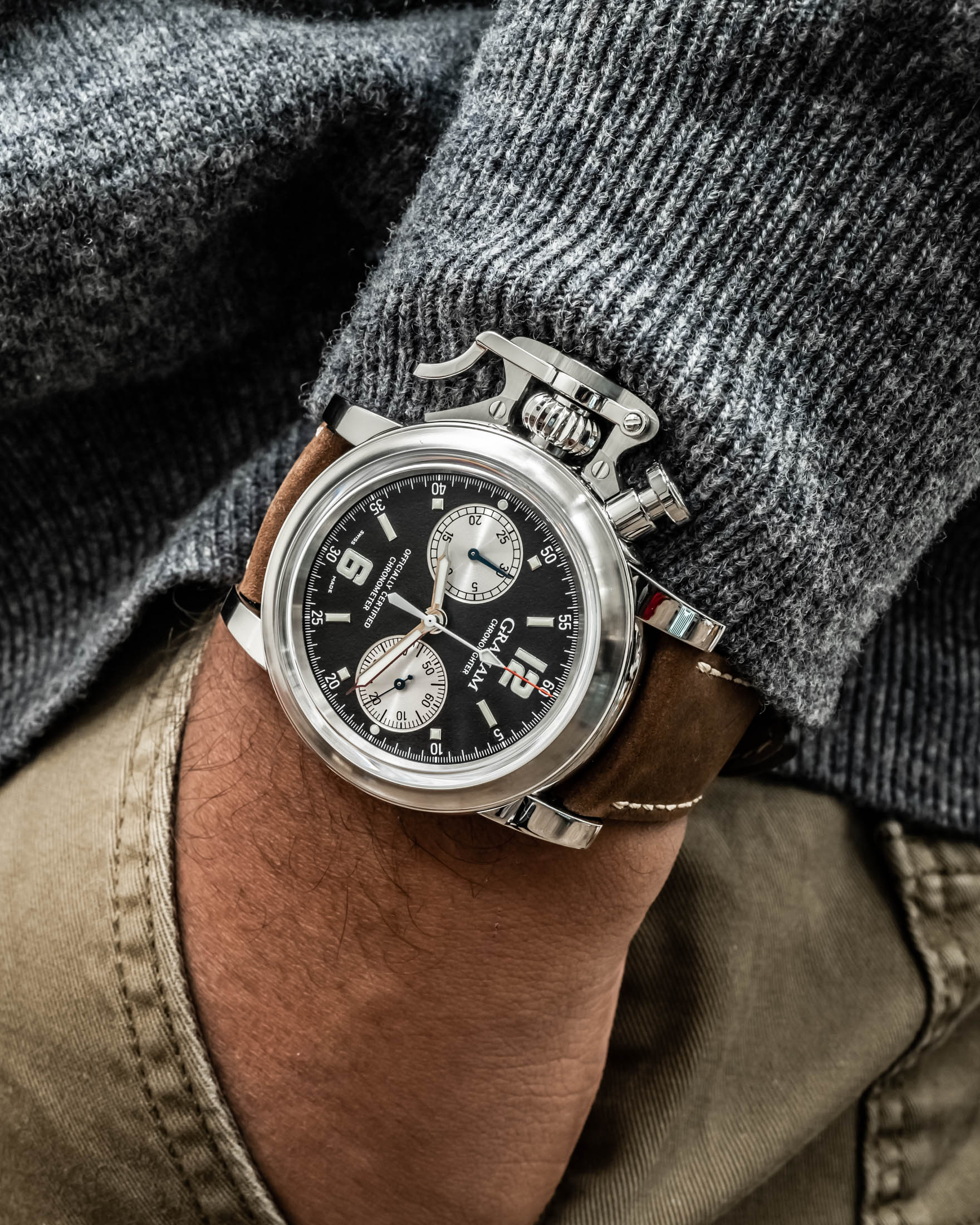 The matte black dial has a bi-compax layout with small seconds at 3 o’clock and a 30-minute register at 9 o’clock. Both subdials are done in silver with subtle and appreciated snailing to add a bit of visual refinement to the piece. I think Graham is at its best when things are kept simple (well, relatively speaking). It feels like the watch is able to breathe without any extraneous day-date indicators, date windows, or design embellishments splashed across the dial. This allowed me to focus on, and really appreciate, the unique silhouette the Graham Chronofighter case cuts. 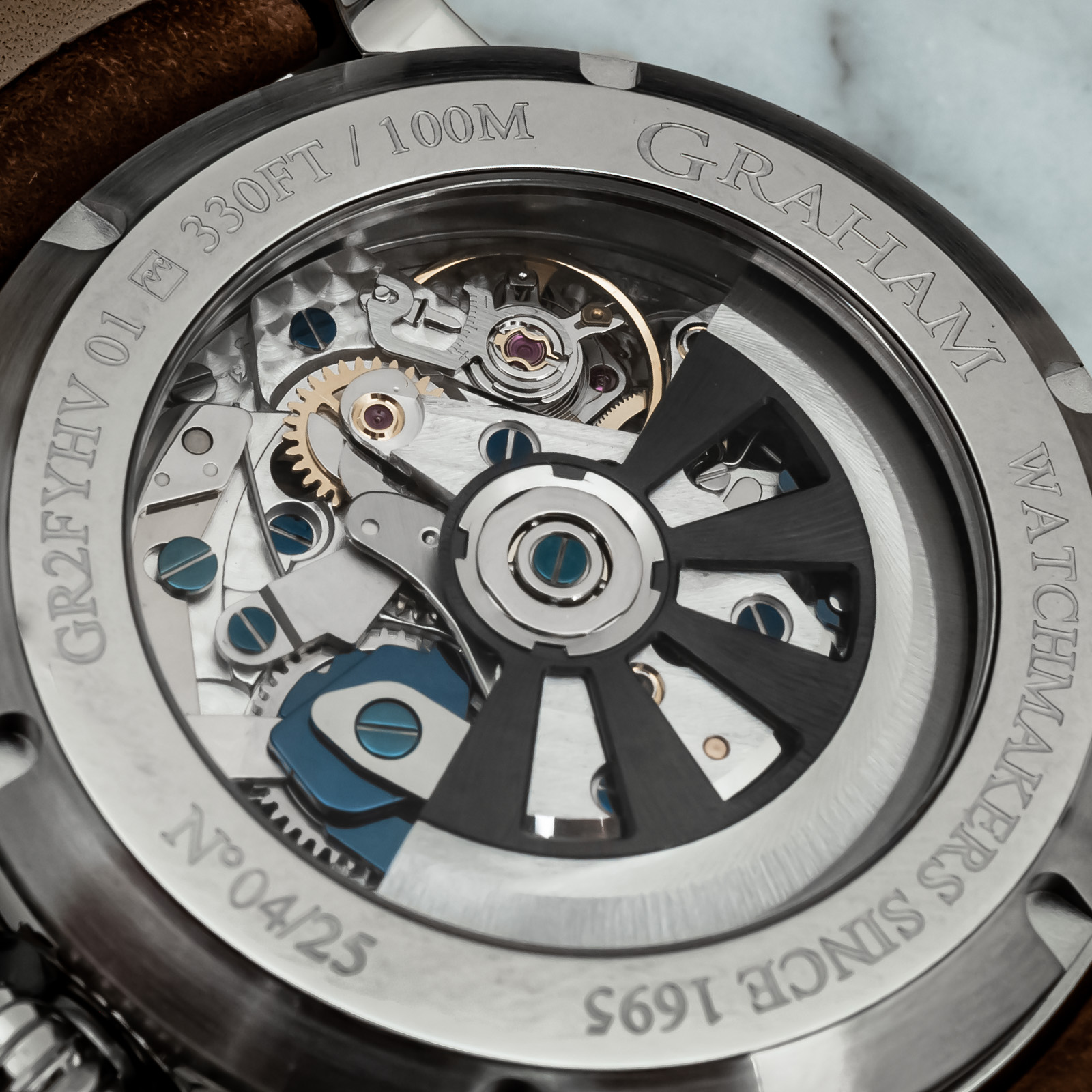 While the original Chronofighter had an enclosed caseback, this new interpretation has a sapphire crystal that shows off the G1722 chronograph movement that’s based off the Valjoux 7750. With some nice blued screws and perlage, the G1722 boasts both COSC certification as well as Chronofiable certification. Chronofiable has to do with how durable and tough the movement is, with a process that involves simulating shocks, acceleration, and temperature changes over 21 days (equivalent to six months of wear). Richard Mille used to boast Chronofiable Certification before moving to an in-house test.

The G1722 operates at 28,800 vph and has a 48-hour power reserve. Oh, and if you’re wondering how the chronograph trigger works, it’s pretty simple. Pressing on the lower lever activates and pauses the chronograph, while the pusher above it resets. 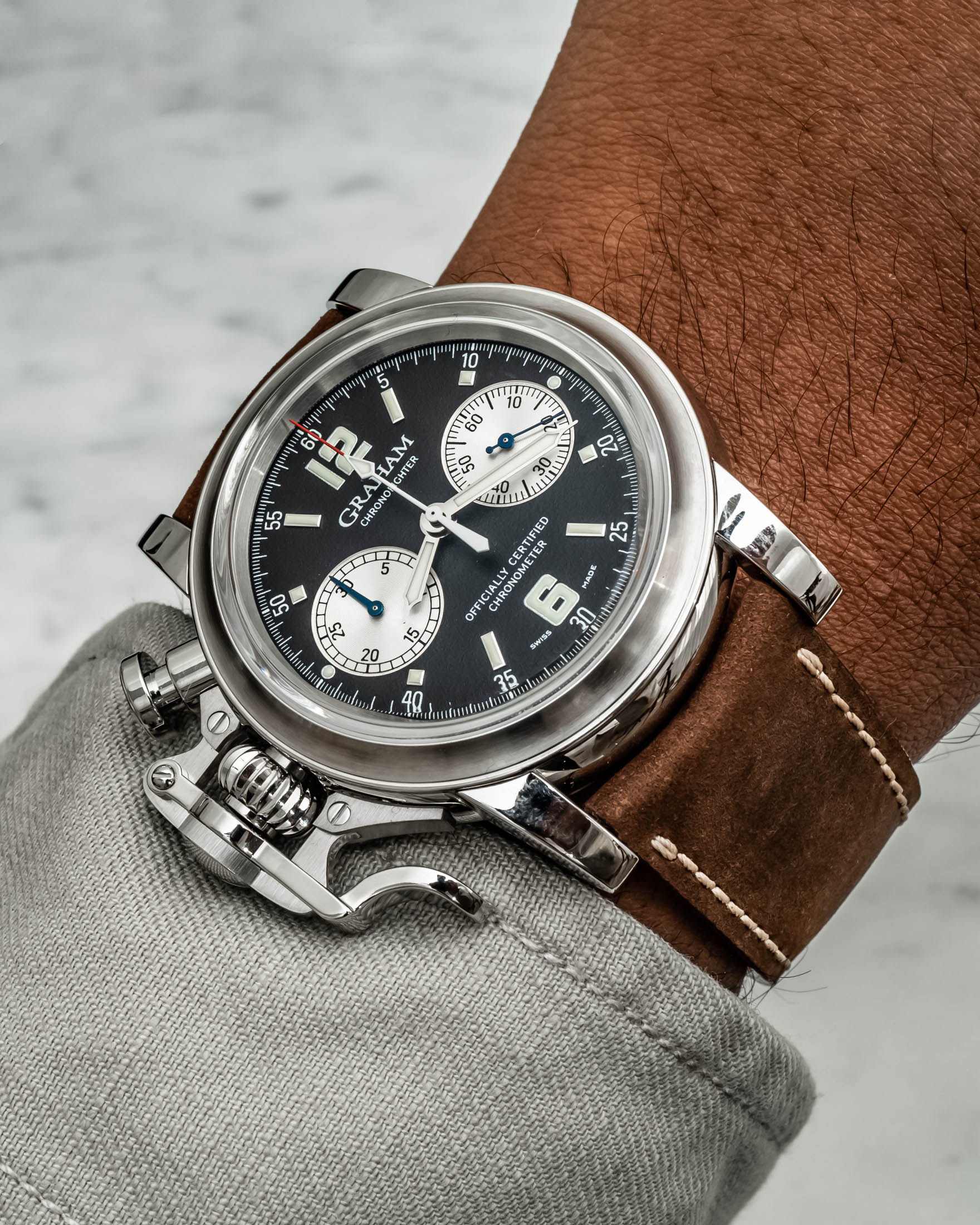 The Graham Chronofighter Vintage 25th Anniversary watch comes on a brown leather strap that matches the watch quite well and wears pretty comfortably. The watch is a limited edition of 25 pieces, though I’d love to see more pieces in this size with this more restrained and classic design. The watch is priced at $6,450. You can learn more at graham1695.com.