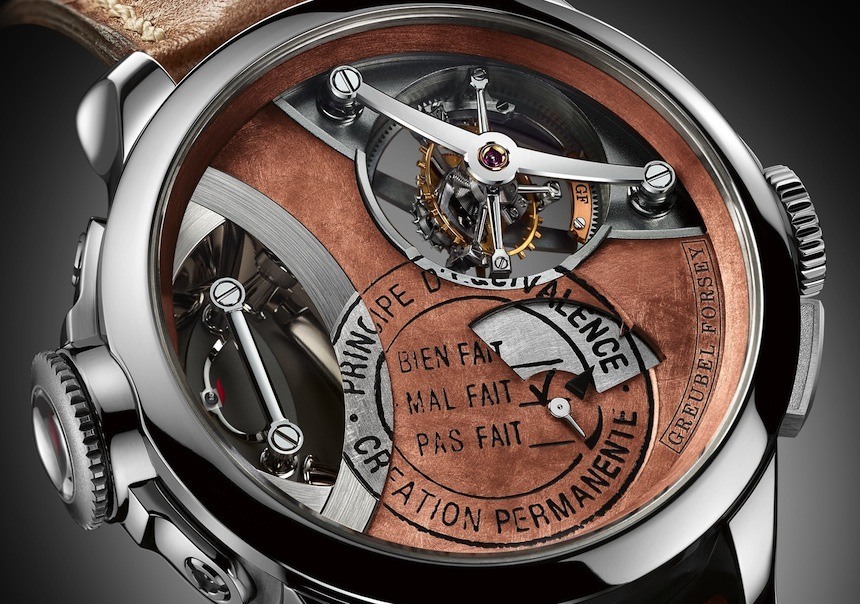 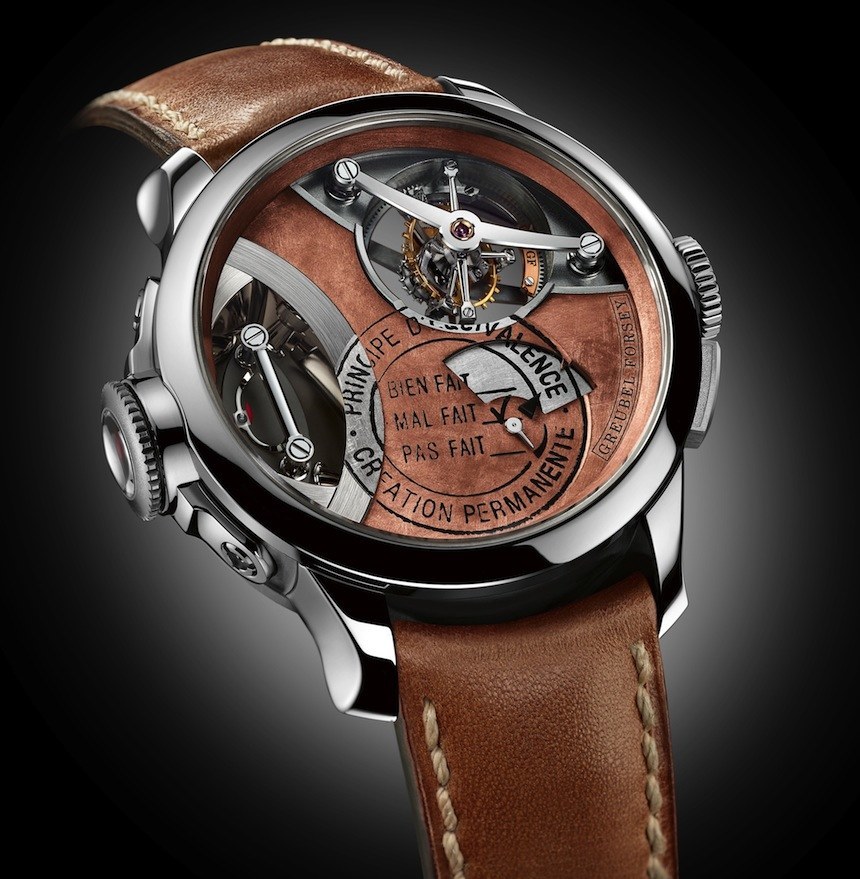 Today, Greubel Forsey announced another version in their slowly but surely expanding Art Piece 1 collection – an extremely limited line of unique watches that feature a genuinely microscopic sculpture, crafted by Willard Wigan. The Greubel Forsey Art Piece 1 Robert Filliou is the latest addition, following pieces that featured barely visible maquettes of a sailboat, a hummingbird, a falcon and even a tribal mask. 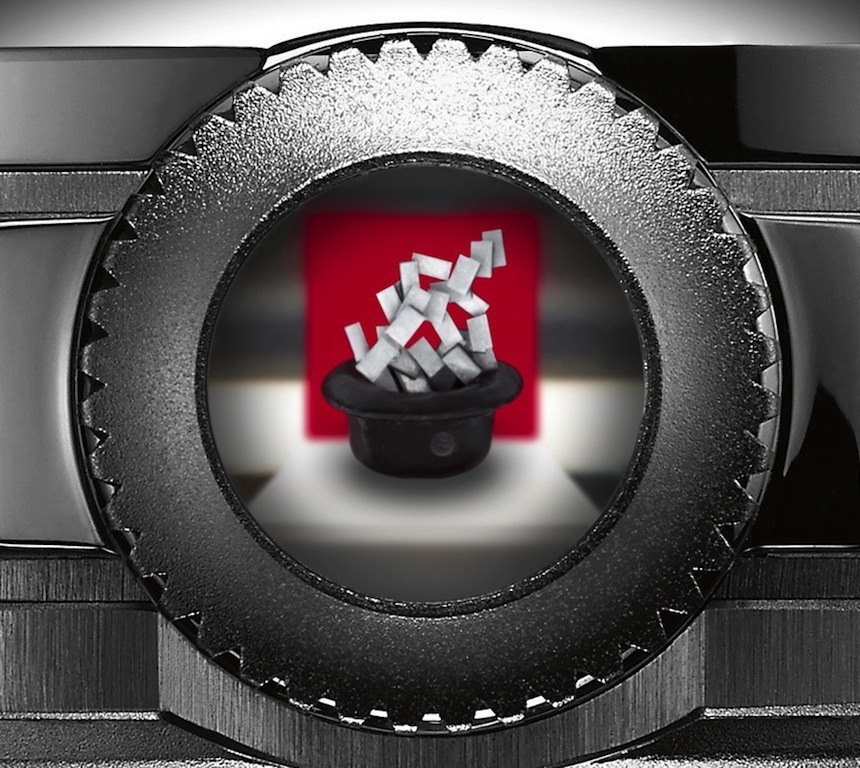 As usual, the centerpiece of the watch is the unfathomably small sculpture created by micro-sculptor artist Willard Wigan. For more details, and a closer look at an Art Piece, check out our hands-on article about the Art Piece 1 here. For this piece, he made a black hat with cards flying out from it and his creation is visible through the magnifying glass integrated into the side of the case – as seen on the image above. The association is clear and unmistakeable: it is a magicians hat featuring a well-known trick, where cards are magically flying out from it. This is executed in a tribute to French “Fluxus artist” Robert Filliou, who produced works as a filmmaker, sculptor, and happenings maestro.

The dial is in bronze, which has a fascinating hue and texture to it – judging from the images it is reminiscent of “salmon dials” that we have been seeing from other brands. A more questionable – albeit arguably “artsy” – design element is the large seal that takes up a considerable portion of the dial. It is there as a tribute to one of two principles that ran through Filliou’s work – and here I do apologize if those more familiar with his career find that my understanding is not entirely correct.

The two principles included Principles of Poetic Economics, while the second is called Principle of Equivalence. Here, he posited a practical equation between what is ‘bien fait,’ ‘mal fait’ and ‘pas fait’ (well made, badly made, and not made). “Equipped with this pseudo-economic equation, Filliou explored the fragile boundaries between process and product, success and failure, genius and mediocrity.” Given that we are here to talk watches, let’s continue discovering this iteration of the Greubel Forsey Art Piece 1. 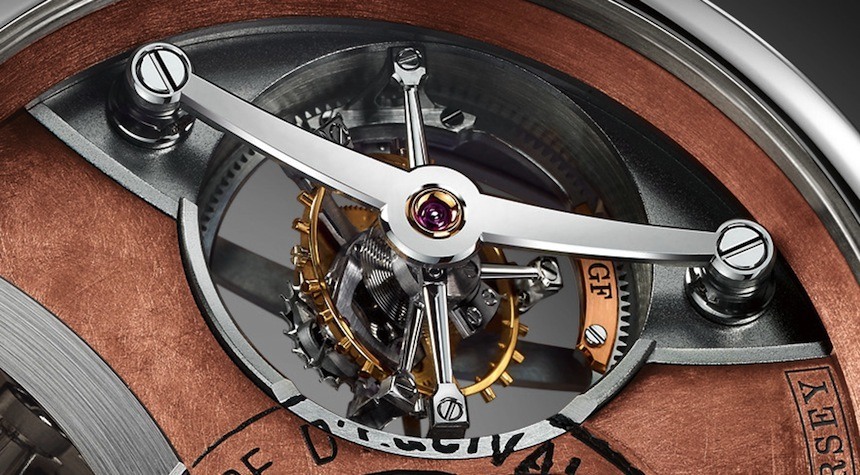 Tributes aside, Greubel Forsey is, of course, much better known for their high-end complications, multiple-axes tourbillons arguably being their trademark. The Greubel Forsey Art Piece 1 contains the Double Tourbillon 30 degrees escapement, which is suspended between two large bridges situated between where you would expect the 12 and 2 hour indices to be. Speaking of indices, the Greubel Forsey Art Piece 1 did away not just with those, but also traditional hands as we know them: time is instead displayed “on demand,” as the aperture in the lower right segment of the dial opens up and reveals spinning discs for the hours and minutes – all after a push of the button located in the right hand side of the case. 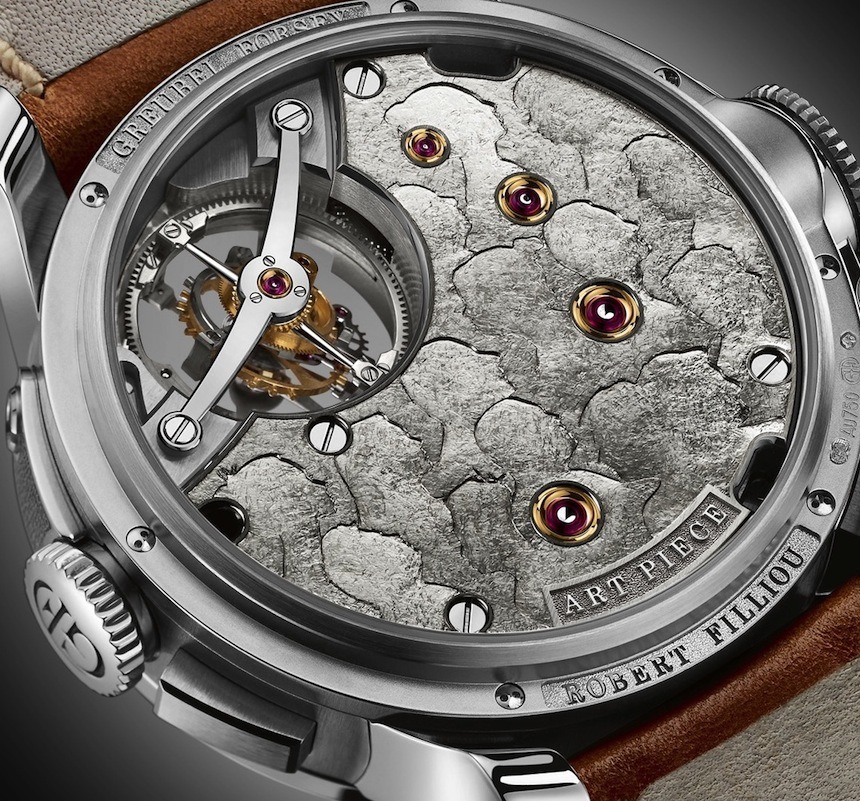 The caseback side of the movement carries on the “tribute” nature of the new Greubel Forsey Art Piece 1: the plate of the movement is adorned with a unique pattern that displays the silhouette of Filliou. And while it could possibly also work as a tribute to Karl Lagerfeld, as a “Where’s Waldo” kind of game those eagle-eyed can actually search for the silhouette of Robert Greubel and Stephen Forsey – if you are tired of looking for them, I’ll tell you: they are at the 5 o’clock position.

The Greubel Forsey Art Piece 1 Robert Filliou is a watch Grebuel Forsey created for a special exhibit in Paris honoring Filliou and his work. Given the usual price point of watches in this series – which is at around $1.5 million – one has to wonder how crazed about fine watchmaking and monsieur Filliou’s work one has to be to pick this watch up. Anyhow, it is always great to see Greubel Forsey try themselves at such new and bold things – although I for one am looking forward to seeing them come up once again with something new that concentrated more on the art that fine watchmaking is all by itself – without something else being blended into the mix. greubelforsey.com