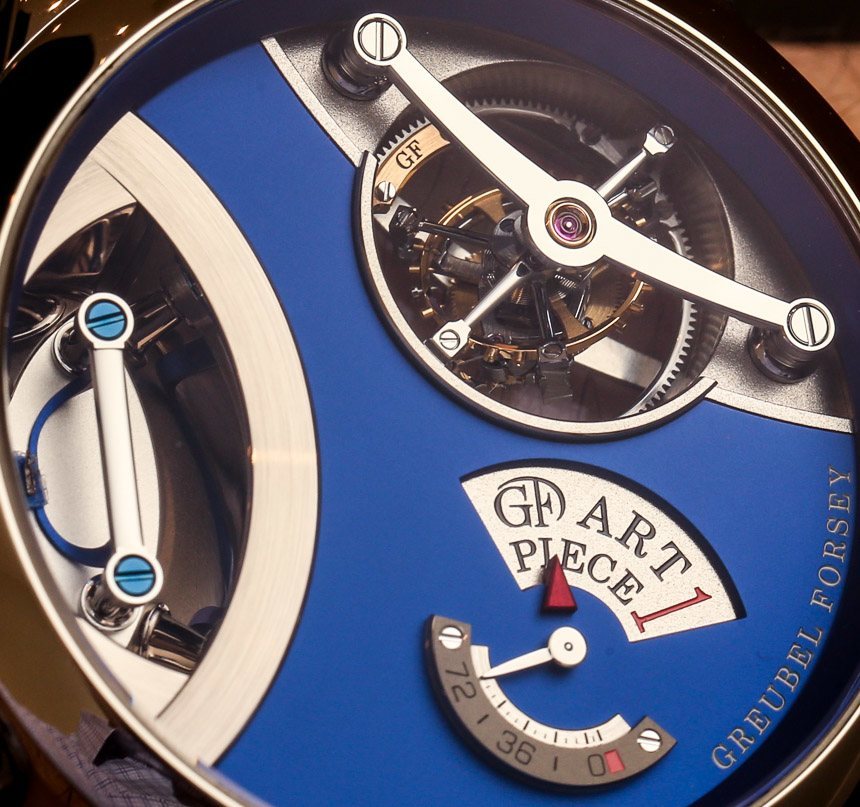 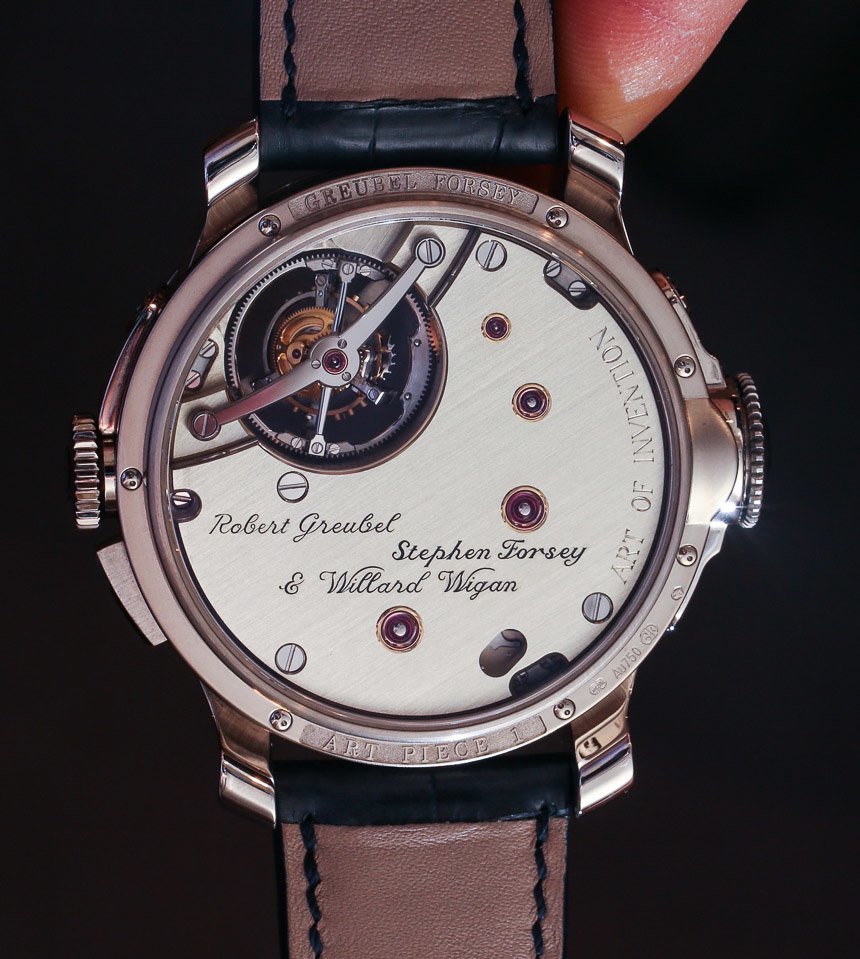 Speaking of mysterious, the Greubel Forsey Art Piece 1 watch isn’t even straight-forward with how it indicates the time. At first glance, looking at the dial you see the inclined tourbillon and a power reserve indicator, but no means of telling the time. When the piece first came out, there was a rumor that the watch did not even tell the time, but was rather a combination Wigan’s sculpture art with the art of a Greubel Forsey tourbillon. However, the watch will indicate the time – mostly.

Notice a pusher sitting under the main crown? I believe that pusher is designed to remove a small covering that goes over the window that indicates the dial via two discs (update: it is). In the PR image further above, you can see the dial with the cover away so that you can read the time. And then if you like, you can cover the time up again with the small window. Adjacent to that is a power reserve indicator, which shows that the Greubel Forsey Art Piece 1 watch has a power reserve of 72 hours, and the movement is known as the caliber GF02w. 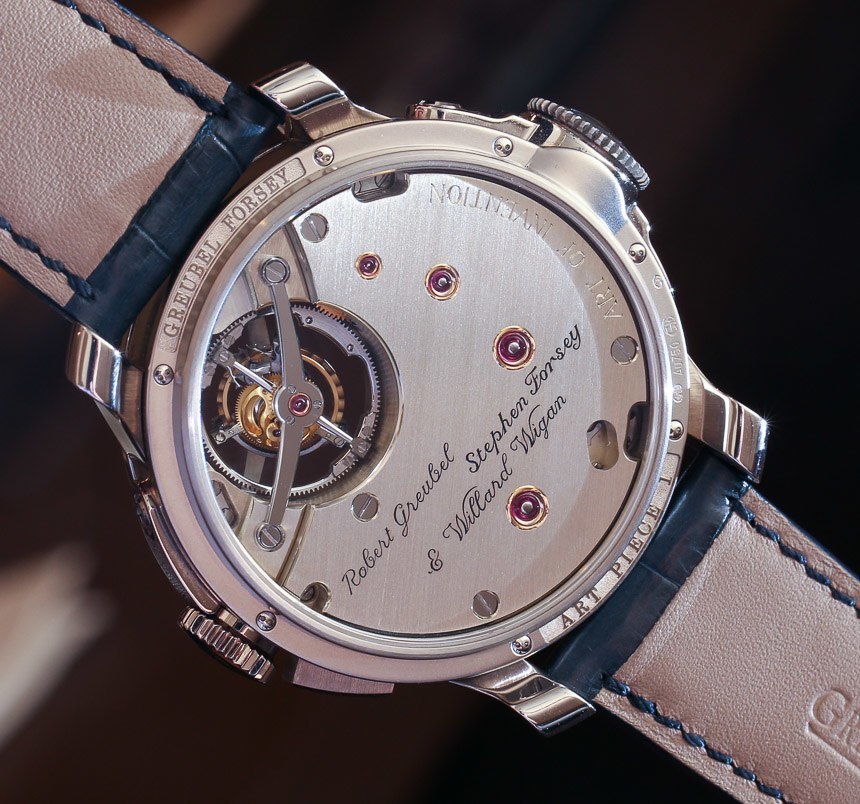 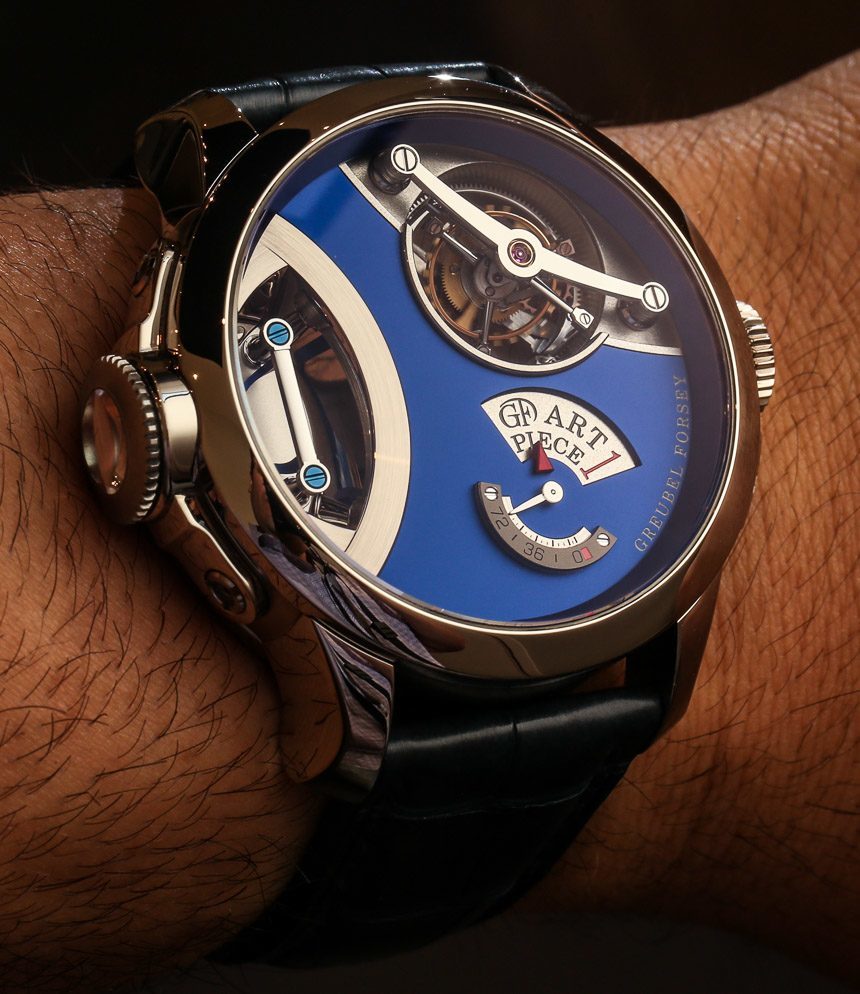 You can further tell that the prototype watch doesn’t have the final face, which while blue, will be engraved with “secret” Greubel Forsey text. Even though the dial is strange, the overall proportions and design of the Greubel Forsey Art Piece 1’s face is still very attractive. To the left of the face is where Wigan’s sculpture sits, and in prototype it looks to simply be secured with an adhesive. The final version will look a bit better, for sure.

As mentioned above, each of the limited production Greubel Forsey Art Piece 1 watches will be made with a unique piece of work by Willard Wigan, and mostly likely, made to order. These are oddly amazing watches and the mystique behind them (which I fully believe not to be intentional) makes them that much more interesting. If anyone was going to do a timepiece and collaboration like this with someone like Willard Wigan, I am happy that it was Greubel Forsey – it certainly helps to give the brand a bit of humor it needs to supplement its typically very serious demeanor. While prices range for the Art Piece 1 watches, the collection starts at over a $1,000,000 and something like this is about $2,000,000. greubelforsey.com