Mr. Stephen Forsey is co-creator of the independent brand Greubel Forsey (GF) which specializes in highly complicated and creative timepieces, with a special focus on tourbillon complications. What sets Greubel Forsey apart from other tourbillon-making watch brands is their focus on innovating on this already complicated addition to fine watchmaking. Some noted releases in their first ten years of operation are the double and triple axis tourbillons, including one with a 30-degree incline, and more recently, a quadruple tourbillon (hands-on here) and timepieces with additional complications such as unique world-time GMT (hands-on here) and perpetual calendar watches. 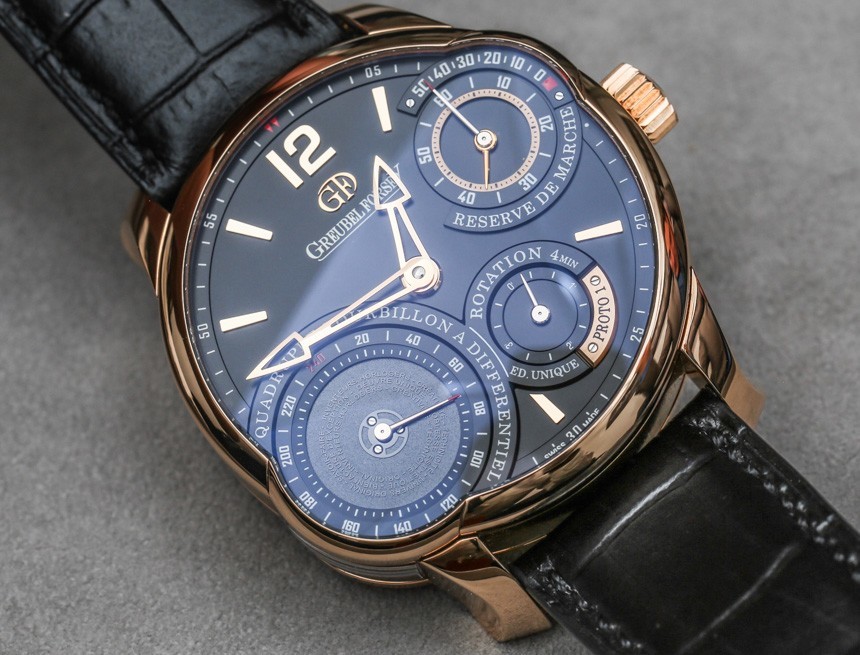 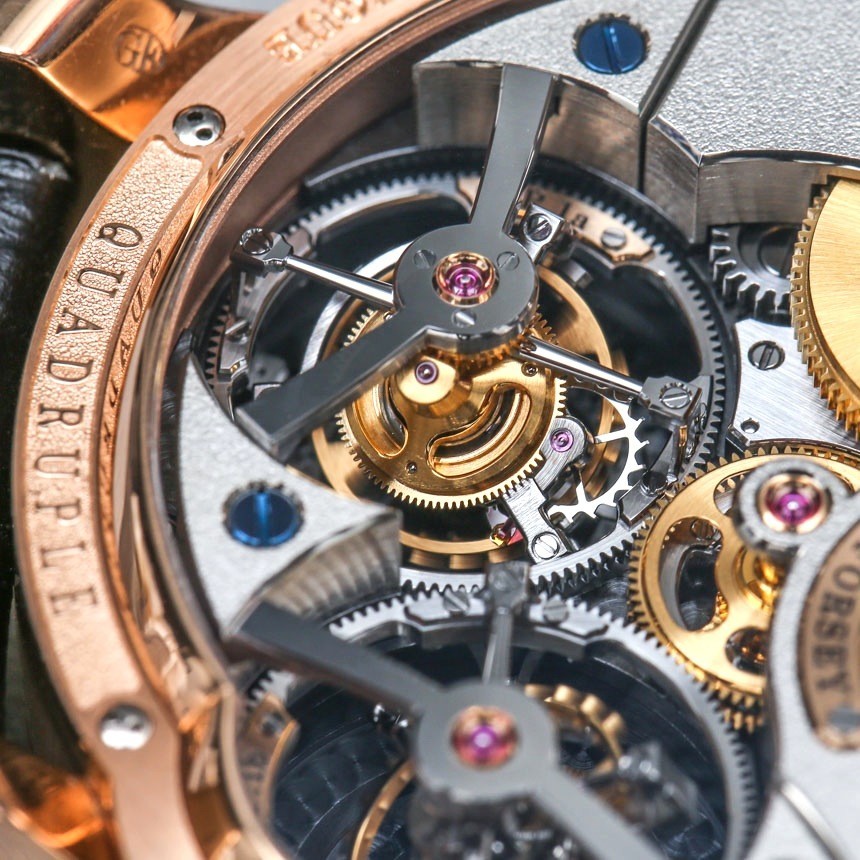 So, after ten years of innovating in the watch world, I was thrilled when Stephen Silver Fine Jewelry in Menlo Park, CA (near Palo Alto, the center of the Silicon Valley area) invited me to spend some time and interview Stephen Forsey as they hosted him in the Bay Area where he was showing off his entire collection for the first time – ten years in the making.

After a complete chronological introduction to each of the Greubel Forsey timepieces by Mr. Forsey himself (sprinkled throughout this post), I was able to spend 15 minutes chatting with the master watchmaker, who I found extremely approachable and fun to be with – a true gentleman. He thoroughly entertained four of my questions, which I have transcribed below with some edits for length and flow.

I hope by reading this interview, you are able to appreciate and see why the watchmaking world is lucky to have brands like Greubel Forsey who, based on the sheer innovative strength of the founders, is really marching to a different drumbeat. 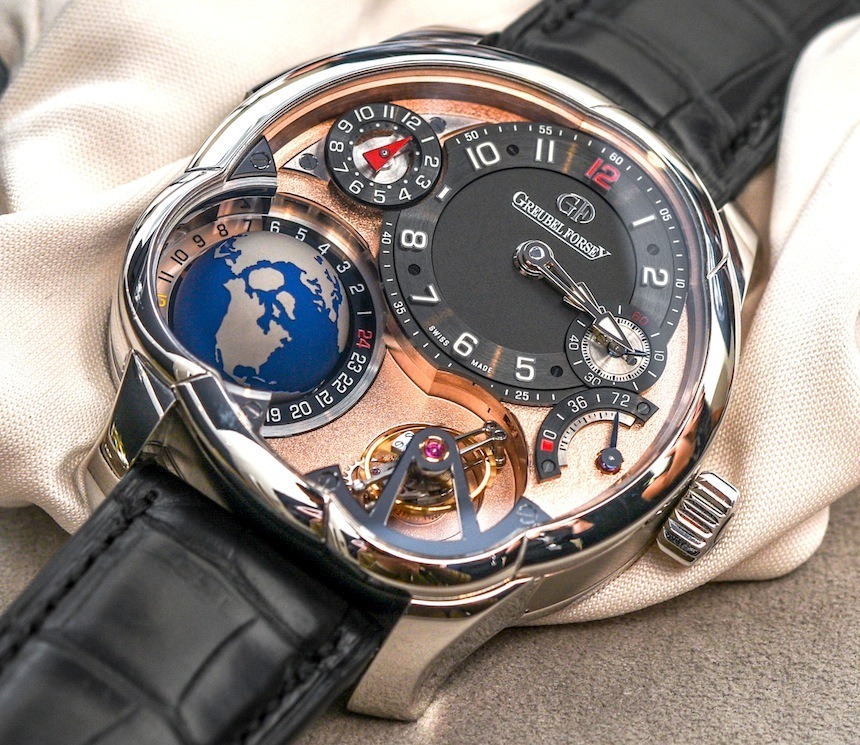 Maximilien: Why did you choose the Silicon Valley area to show your entire timepiece collection in the USA for the first time?

Stephen Forsey: For Greubel Forsey, the San Francisco and Silicon Valley area – particularly here in Palo Alto, the edge of Silicon Valley – we are here for the second time and for the first time showing our entire collection; the first ten years; 17 calibers – which in our own way shows the creativity in watch making. So to bring it to this region [where innovation in technology is paramount], we feel there is a resonance with the dynamism, with the creativity in invention, that is so fruitful here. 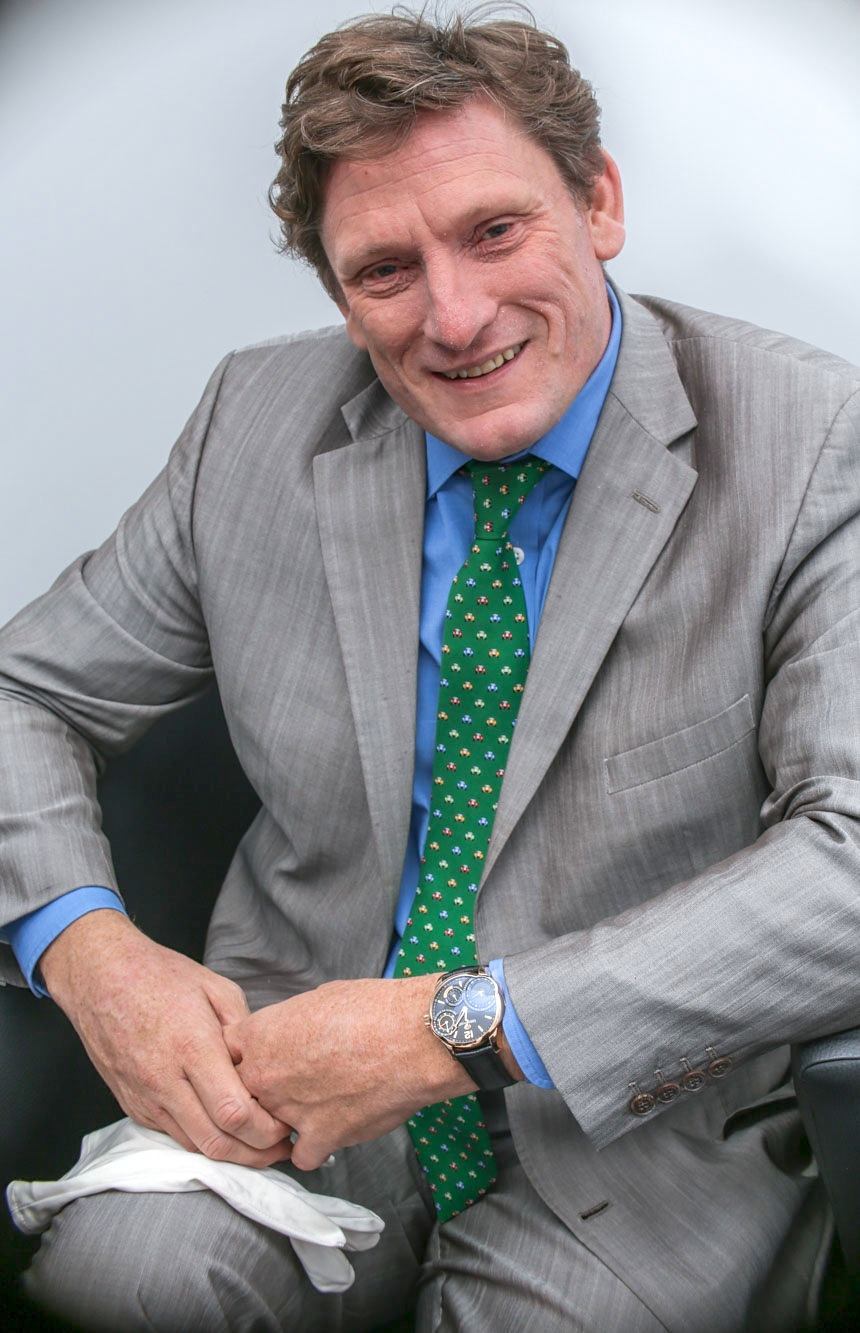 This particular location where we are at, Stephen Silver Fine Jewelry in Menlo Park, is very interesting. We’ve spent a few days here already. There is an energy here which is just incredible. You just sit in the lobby, and there are people coming in an out, and you feel there is something in the air – maybe it’s just California. [Maximilien: This is the place where startups are created]. Yes, yes, in many ways we are still a startup, you know. We have not grown up in terms of volume. We stayed very focused. We only make a few hundred pieces per year (in total, worldwide). Due to the high focus on creativity and unique nature of each piece, the numbers remain incredibly small. By nature, our pieces are exclusive and rare.

Maximilien: Pretty much all of your pieces are tourbillon-based. Maybe you can explain to the audience of aBlogtoWatch: what is the fascination with this particular complication? Why the tourbillon?

Stephen Forsey: Yeah, so for Robert Greubel and myself, two watchmakers, our whole career – a little over 30 years for myself and for Robert a few more years than me – it was very early on that we discovered the magic of this complication, which never left us indifferent. There is the motion of the cage which itself has a certain magic, even if you don’t immediately understand the tourbillon. Then, for Robert and myself – we have to go back now 16 years to the eve of the year 2000 – we had a series of discussions about our past 10 years. Developing for our employers at the time grande sonneries, perpetual calendars, tourbillons, and so on, we were using the historical past… but we wanted to bring something new to the history of watchmaking. 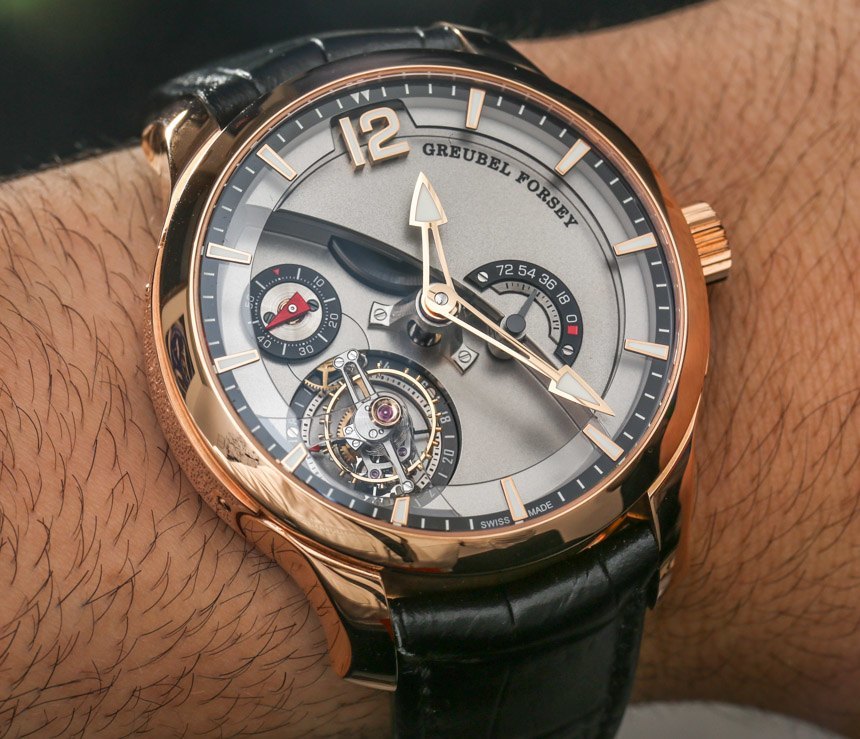 So we combined lots of existing 19th century mechanical watchmaking knowledge. We combined our efforts and realized we could not continue where we were working and do what we wanted to do. So we started our own company to explore new approaches for mechanical watchmaking. We came out with the double axis tourbillon. We also wanted to bring the best of hand finishing. The other element was to bring our watches to the level beyond prototypes and produce finished timepieces. So our laboratory was used to produce timepieces to the same level of reliability as any other mechanical timepiece. The architecture, the invention, the reliability, and the design are the four elements that every GF comes packed in. The tourbillon is a great example of a complication that helps us attain our goals. 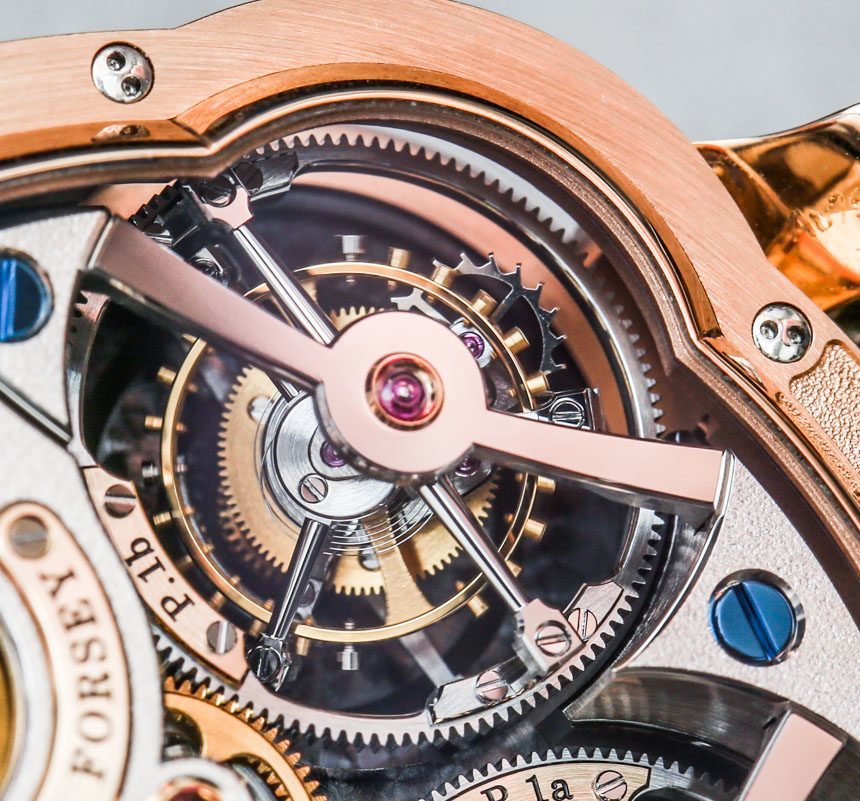 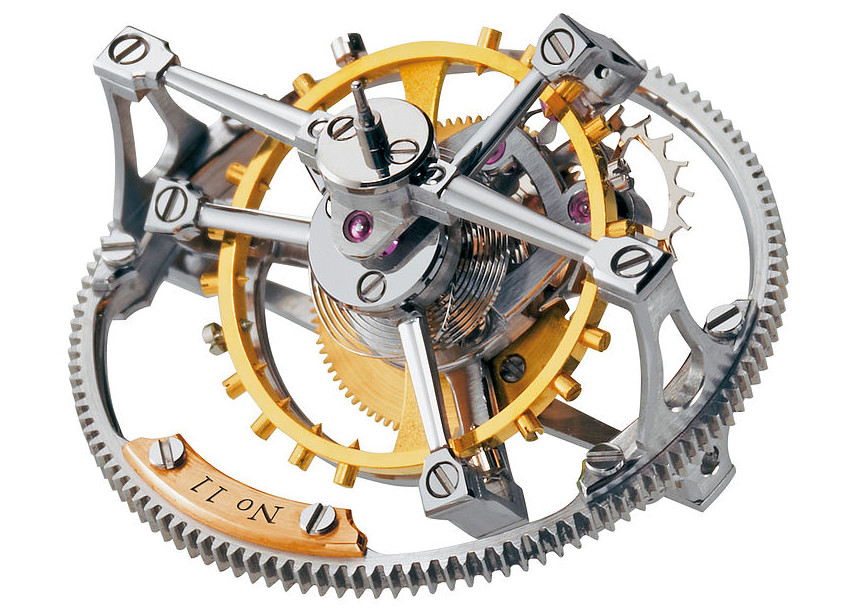 The tourbillon was a great subject of study but not the absolute. In terms of the tourbillon, there were three major inventions: The double tourbillon 30 degrees, then the quadruple tourbillon – four in the space of two and, for the first time, two escapement systems in three dimensions. Then, having gone complex to very complex, we went back to the single cage: 24 seconds with fast rotating incline tourbillon. By building a scientific team, we are able to approach the tourbillon complication from various angles.

So then it was the GMT with the rotating globe, with a striking architecture and ease of use… Then, more recently, the perpetual calendar, at the end of the first ten years. And, again, for GF, it’s not enough to have just a date feature, but we want something special for collectors: day of the week, large date, month, year, all coded mechanically, and with a bi-directional winding crown. We had to push our team and ourselves to achieve this, and that is the spirit of GF.