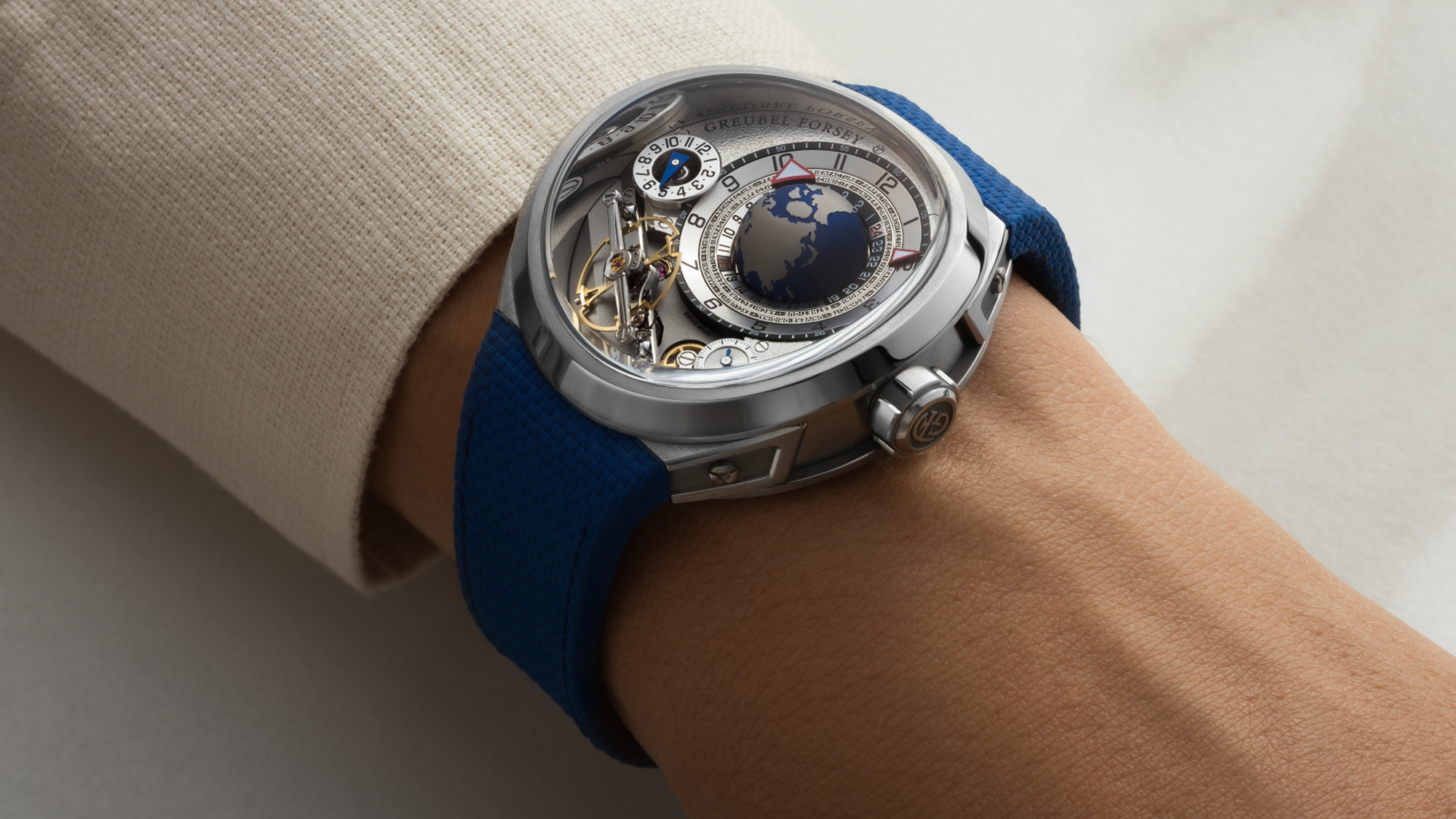 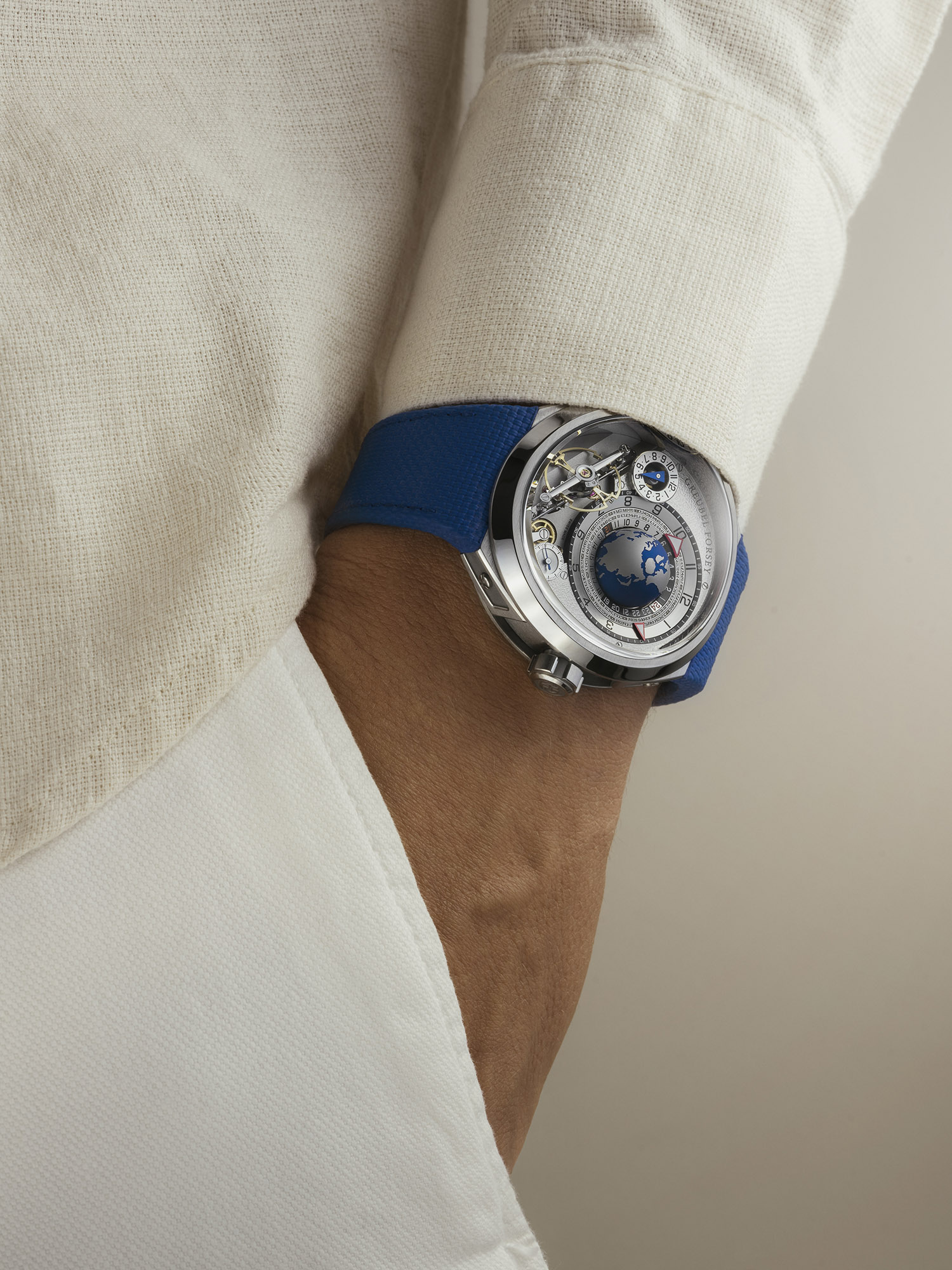 Although boutique haute horlogerie brand Greubel Forsey has built a variety of truly spectacular designs over the years, few elements stand out as vividly from the brand’s lineup as the three-dimensional sculpture of the Earth it uses for its GMT models. This deep, finely detailed presentation has evolved through several iterations since its initial debut, and for Geneva Watch Days 2022 Greubel Forsey is introducing a new generation of GMT-equipped watch that will fully replace all previous GMT models in its catalogue. The limited edition Greubel Forsey GMT Balancier Convexe carries a heavy burden within the brand’s lineup, but delivers a dramatic new interpretation blending several of its most iconic features with a world-class level of finishing. 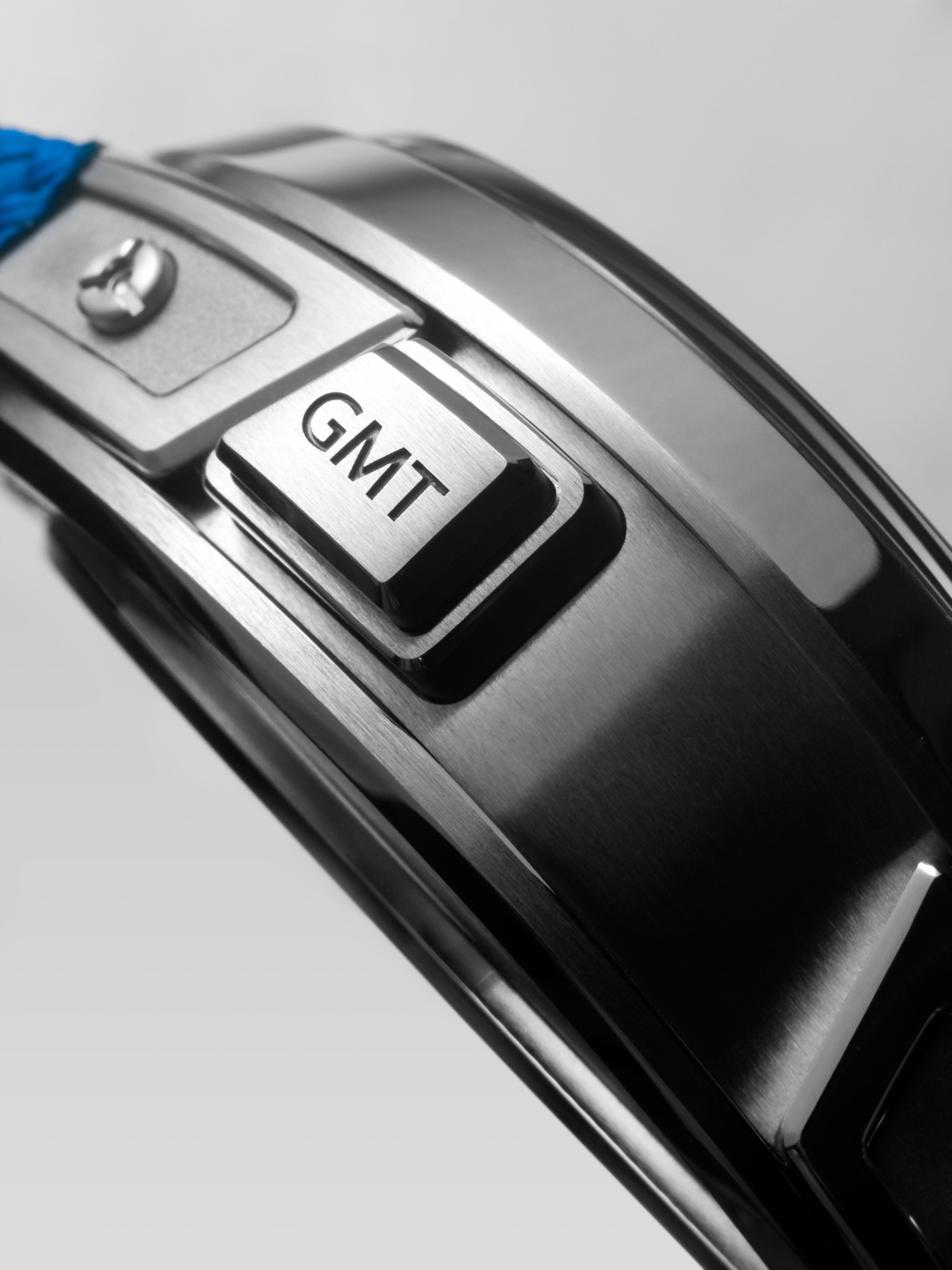 Greubel Forsey’s distinctive “variable geometry” case design concept is in full effect for the GMT Balancier Convexe’s 46.5mm-wide titanium case. What appears at first glance to be a relatively straightforward tonneau case shape reveals hidden layers of intricacy on close inspection, particularly through the bezel design. The bezel itself, with its brushed upper segment and broad polished bevel, follows a unique compound curve, arcing to match the rest of the case’s pronounced curve from 12 o’clock to 6 o’clock while also bending downwards to meet the comparatively flat case sides at 3 o’clock and 9 o’clock in images. Following these multiple curves while maintaining proportions between each of the various segments of the bezel is no mean feat of case design, but Greubel Forsey’s use of a domed sapphire crystal that follows this same multidirectional curvature without noticeable distortion involves a painstaking, immensely difficult crafting process. Of course, this complex case design does not come without its drawbacks, and the design’s 17.4mm overall thickness should cut an imposing figure on the wrist. Although Greubel Forsey equips the GMT Balancier Convexe with a sapphire caseback, the entire view  beneath this crystal is given over to a reference of all 24 time zones, tracked in both summer and winter time. In keeping with the sporty overall design, Greubel Forsey rates the watch for a solid 100 meters of water resistance. 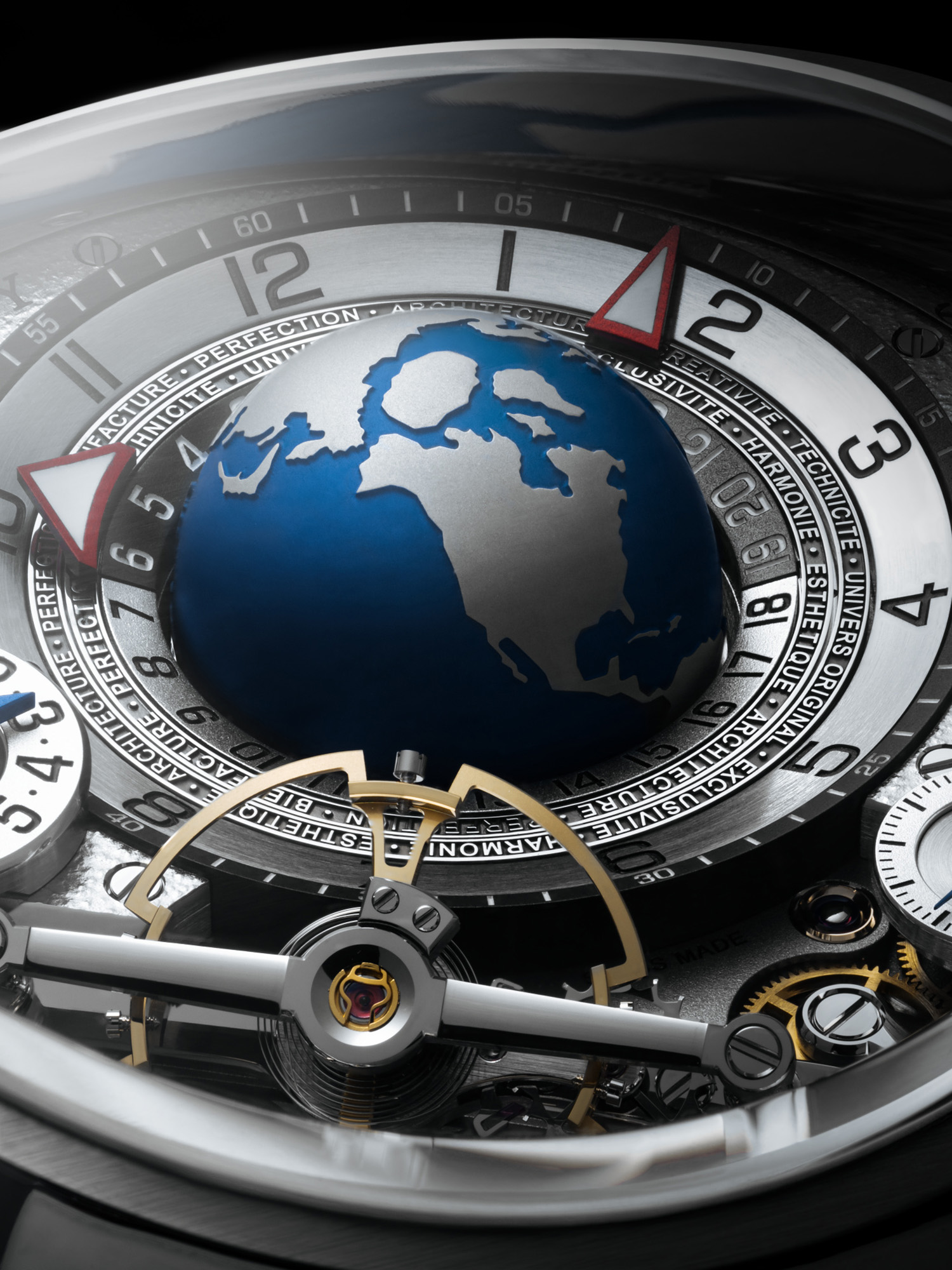 The dial of the Greubel Forsey GMT Balancier Convexe offers a cleaner, more distilled layout than its predecessors, but maintains several of the brand’s most recognizable motifs. The largest change, naturally, is the positioning of the combination main timekeeping and world time subdial at 1 o’clock. Rather than previous iterations’ attempts to shunt these elements to the side in favor of highlighting more esoteric movement elements, this front-and-center placement both aids legibility in images and reframes the familiar Greubel Forsey design language with a cleaner, more function-forward ethos. Two floating triangular hands in red handle the main timekeeping functions for this subdial. Just inboard of these are a pair of engraved rings espousing Greubel Forsey’s core brand virtues, including words like “Perfection” and “Exclusivite.” These are likely to be divisive elements among enthusiasts, but the engraving work itself appears to be impressively finished in images. At the center of the assembly lies the hemispherical sculpted model of the Earth, which functions as a 24-hour world time hand in conjunction with the inner 24-hour ring. As this rendition of the Earth rotates, each location lines up with the corresponding current time, providing a graphic and intuitive display of all 24 time zones in images. Just below this large subdial at 7 o’clock sits the GMT Balancier Convexe’s other visual centerpiece. The inclined balance wheel, sitting above the exposed movement plate at a canted 30-degree angle, has become a staple of Greubel Forsey’s designs in recent years, and here the elegantly slender wheel and tapering balance bridge vividly highlight the visual depth of the overall design. The GMT complication is condensed into a small subdial at 9 o’clock, with a single 12-hour hand rendered in blued gold. A compact running seconds subdial at 4 o’clock rounds out the GMT Balancier Convexe’s dial side complications, with a minimalist execution featuring a blued needle hand. Greubel Forsey flanks these subdials with the exposed titanium movement plates and bridges, hand-finished with a bright, unique frosted texture. 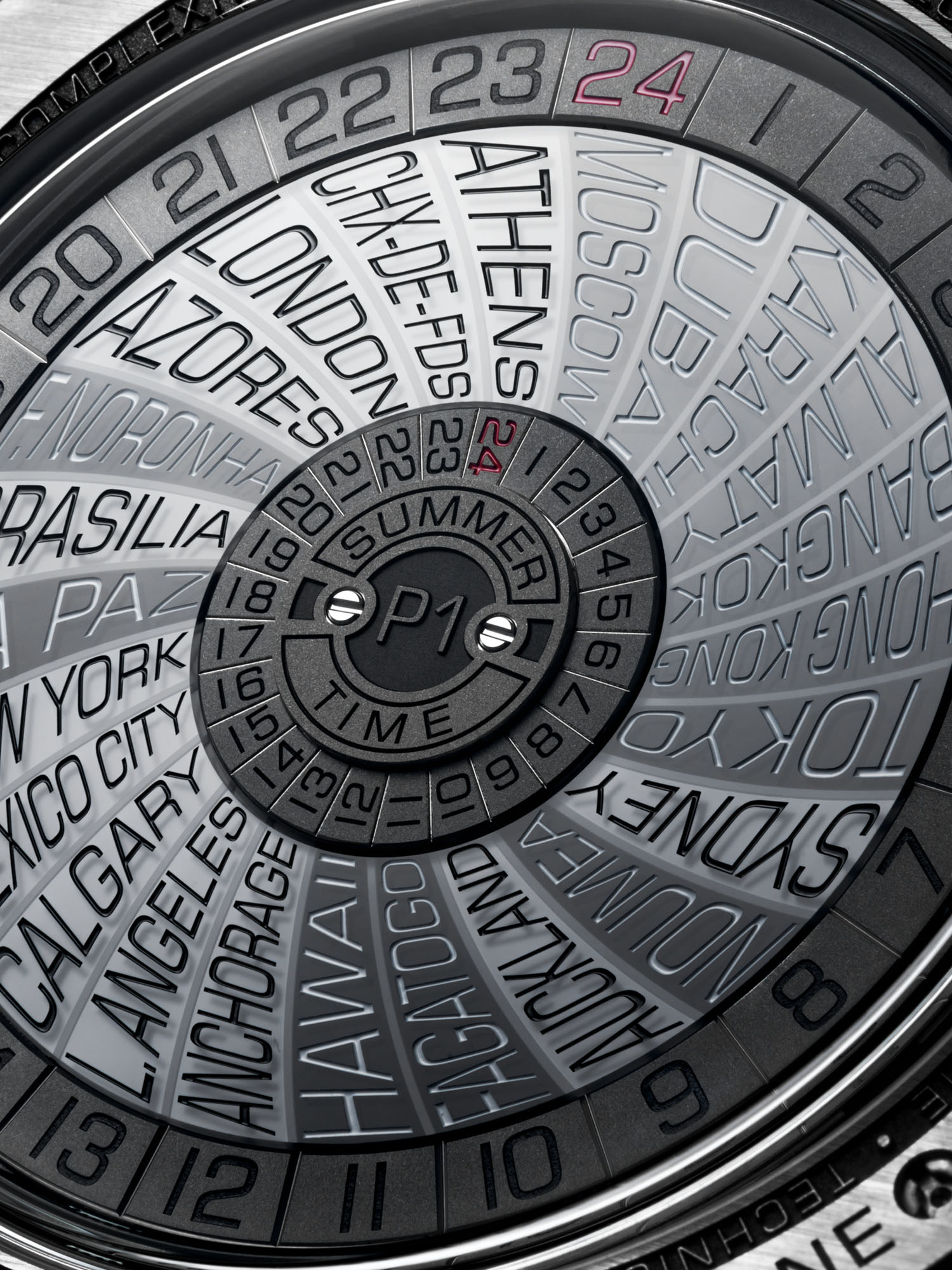 Inside the Greubel Forsey GMT Balancier Convexe beats a new in-house handwound movement. Although this is ostensibly a skeleton design, most of the inner workings of this new unnamed powerplant are kept hidden in images, with the exception of the prominent 7 o’clock balance wheel. Although this is a new movement arrangement for the brand, this novel powerplant includes many of Greubel Forsey’s trademark innovations, including a pair of series-coupled co-axial mainspring barrels rotating at an impressively fast 3.2-hour rotation rate. Likewise, the brand’s shock-and-awe approach to variable inertia balance wheel design is carried over from previous Greubel Forsey movements, including its 30-degree angle to the rest of the movement and the balance spring’s Phillips terminal curve. Overall performance for this movement is solid, if not jaw-dropping, with a 72 hour power reserve at a 21,600 bph beat rate. Greubel Forsey finishes the watch with the option of either an integrated titanium bracelet or a textured fabric-effect rubber strap in striking cobalt blue. 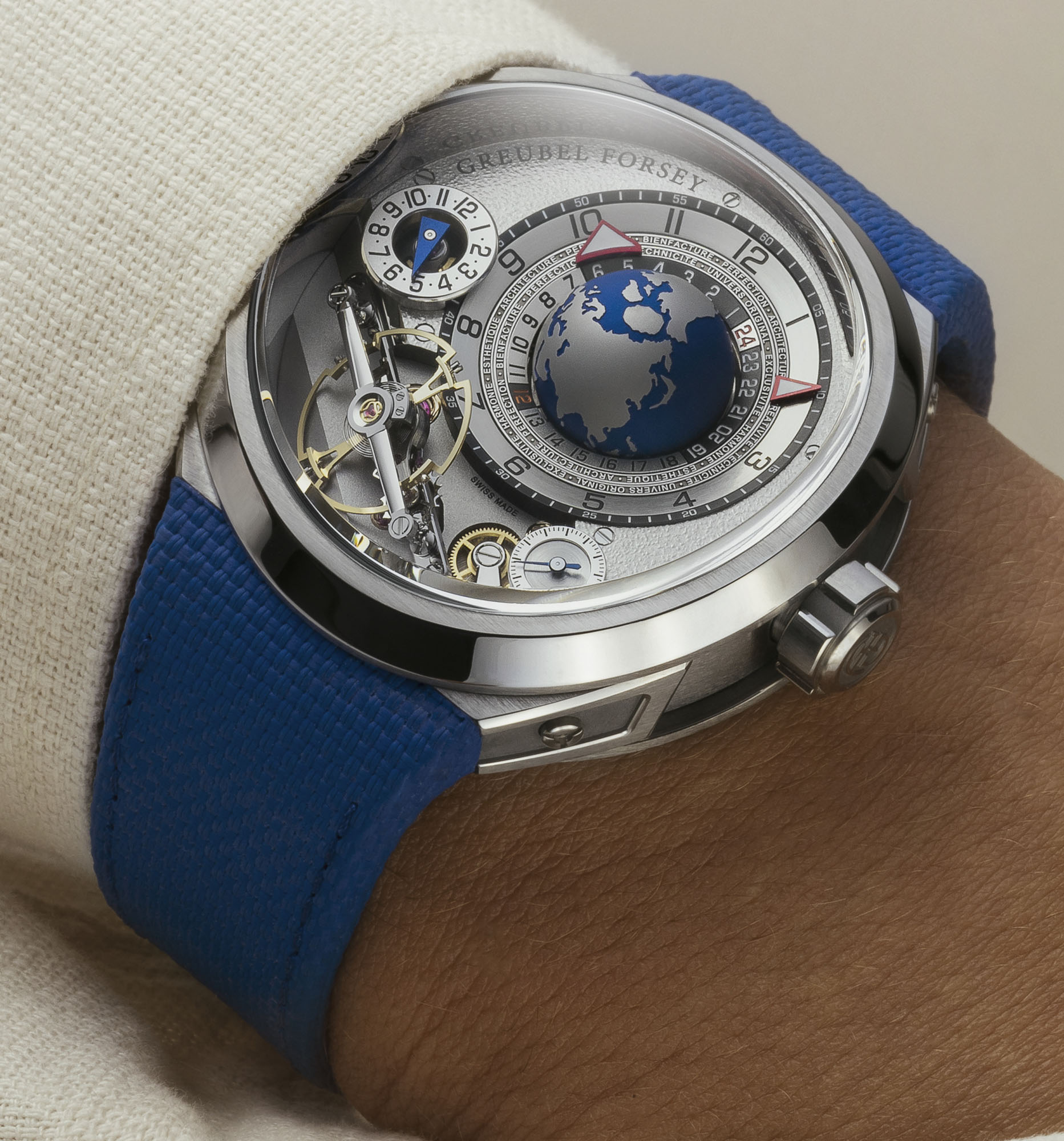