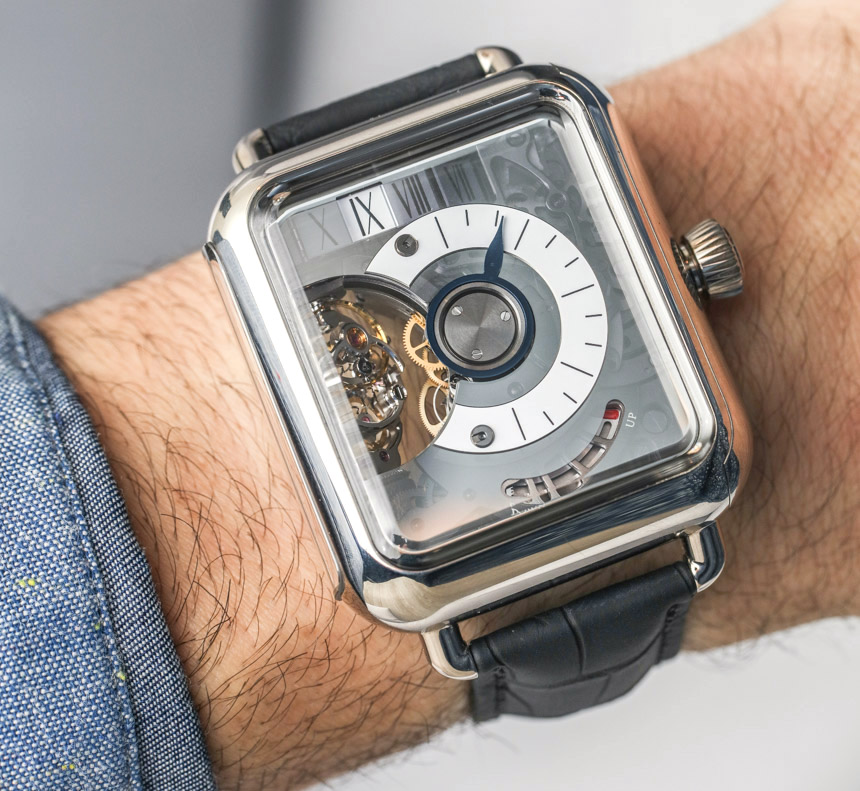 At SIHH 2017, H. Moser & Cie released this interesting limited edition watch that contains a movement previously only used in Hautlence watches. If I just saw it in pictures I wouldn’t have liked it as much, but in person it is strangely satisfying. With bulbous proportions and a tall-off-the-wrist wearing experience, the appeal of the H. Moser & Cie Swiss Alp Watch Minute Retrograde is in the relaxed, modern look of the case that artistically contrasts with the very complicated movement on the inside. 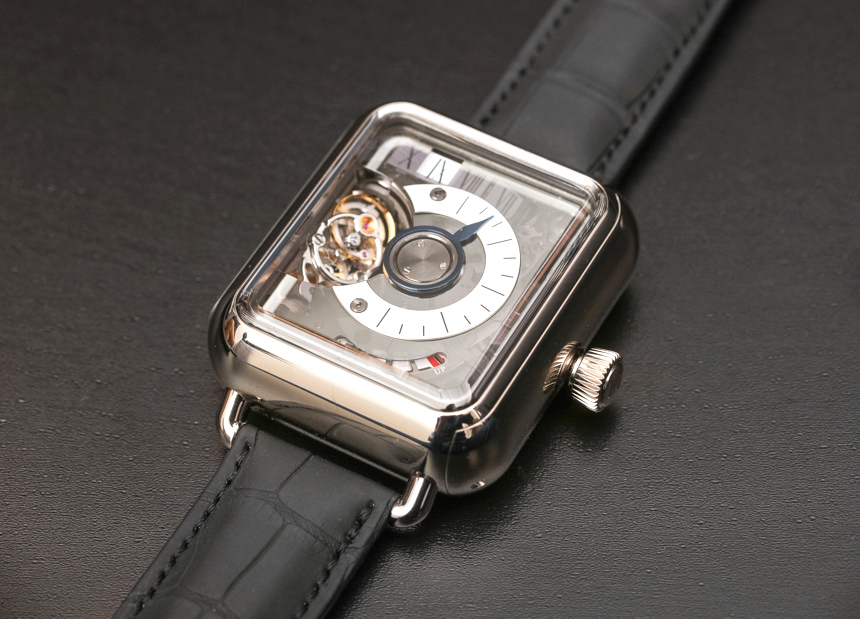 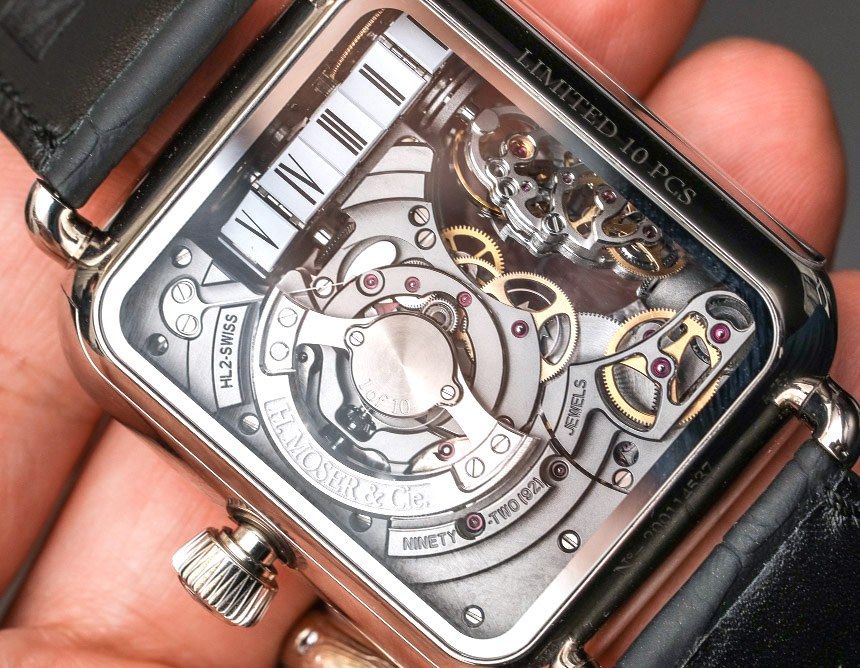 The life of the H. Moser & Cie Swiss Alp Watch Minute Retrograde began back in 2010 when Hautlence debuted the first version of the HL2 which was more techie in its design with an emphasis on architectural futurism. The HL2 (HL2.0) movement was really cool for a number of reasons, and to this day remains one of my favorites to witness the realization of modern horology. The movement is rectangular in shape and was designed both in Hautlence models and this H. Moser & Cie model to take up most of the case and show off what is on the inside as much as possible. Hautlence last used the movement in their Vortex watch collection (hands-on here) and prior to that in the Hautlence HL2.1 and HL2.5 watches (hands-on here). 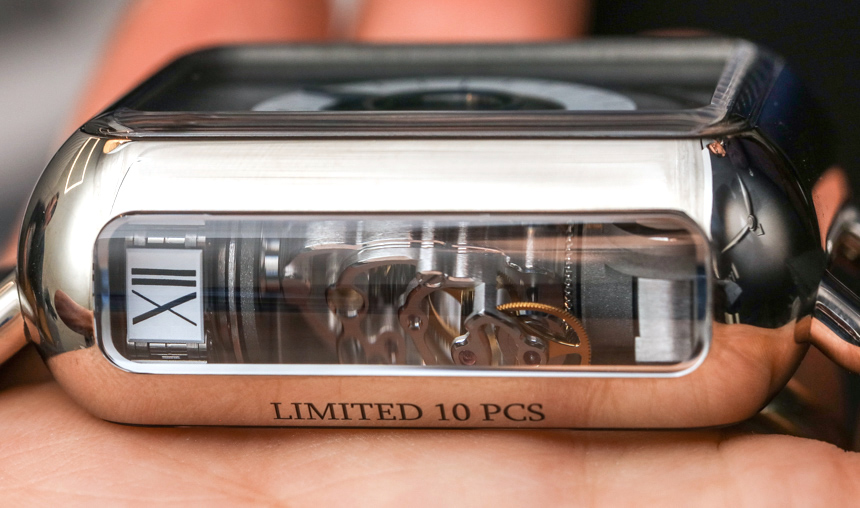 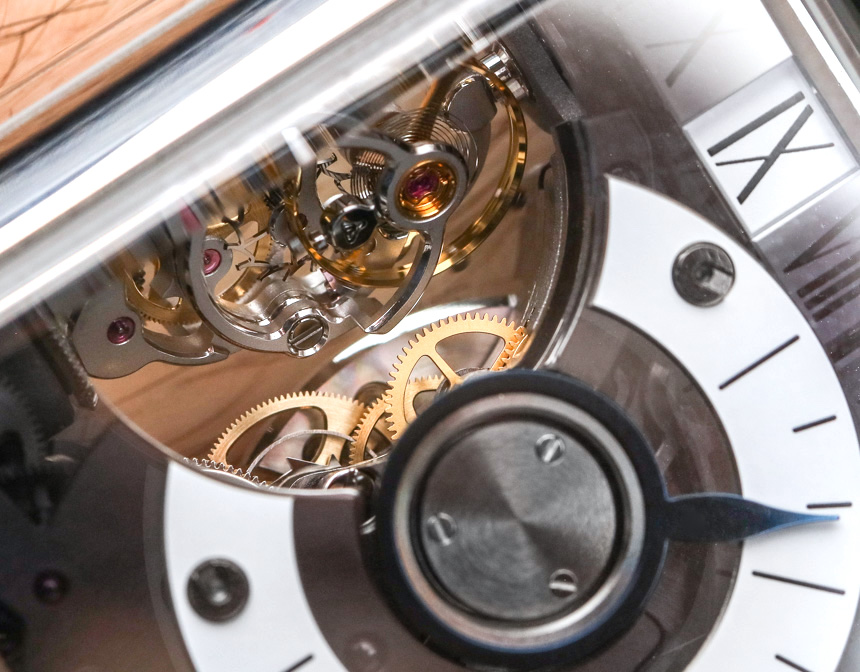 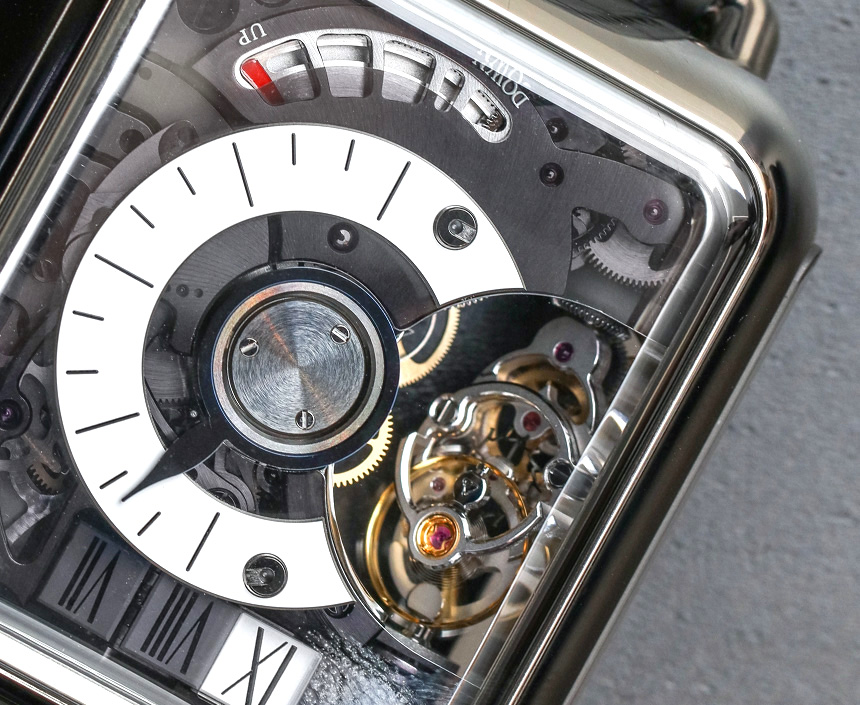 The caliber HL2.0 movement has a number of interesting talking points, starting with its own style of “tourbillon.” The balance wheel regulation system is a long vertical assembly which turns with the movement of a tread that is used to indicate jumping hours. You need to see this in person to really understand it, but near the top of the case is a small window to show the hours (here, in Roman numerals) which move in one-hour segments at the end of each hour. As each hour passes, the column that the regulation system is built on rotates a little bit, and it is really interesting to see in action. The escapement operates at a frequency of 18,000bph (3Hz), and the movement has a power reserve of 45 hours with two mainspring barrels. 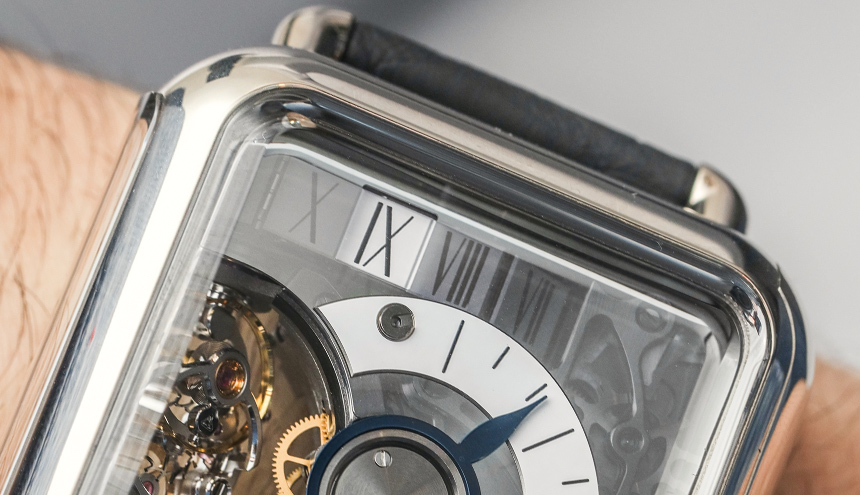 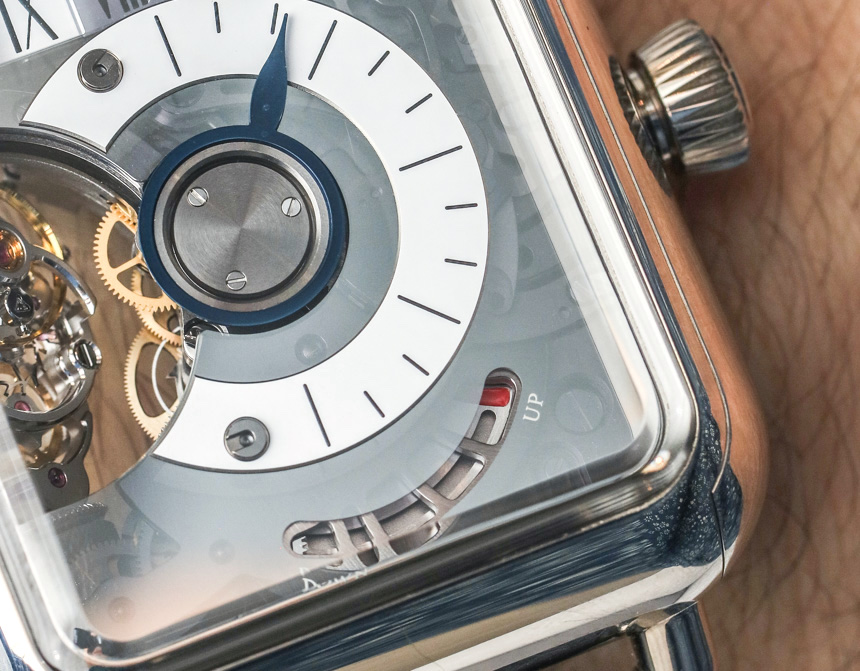 The movement is an automatic with a micro-rotor, and one of the barrels is exclusively used to power the complex motion of the hour marker chain belt. What is really lovely about the operation of the movement is that upon the passing of each hour, the hour marker belt moves slowly taking a few seconds. It is something which is rather cool to watch. The HL2.0 movement also has a retrograde indicator for the minutes, which on the H. Moser & Cie Swiss Alp Watch Minute Retrograde timepiece is set against a white grand feu enamel dial (with a traditionally designed blued steel hand). At the bottom part of the movement is a handy power reserve indicator dial – which I always appreciated. 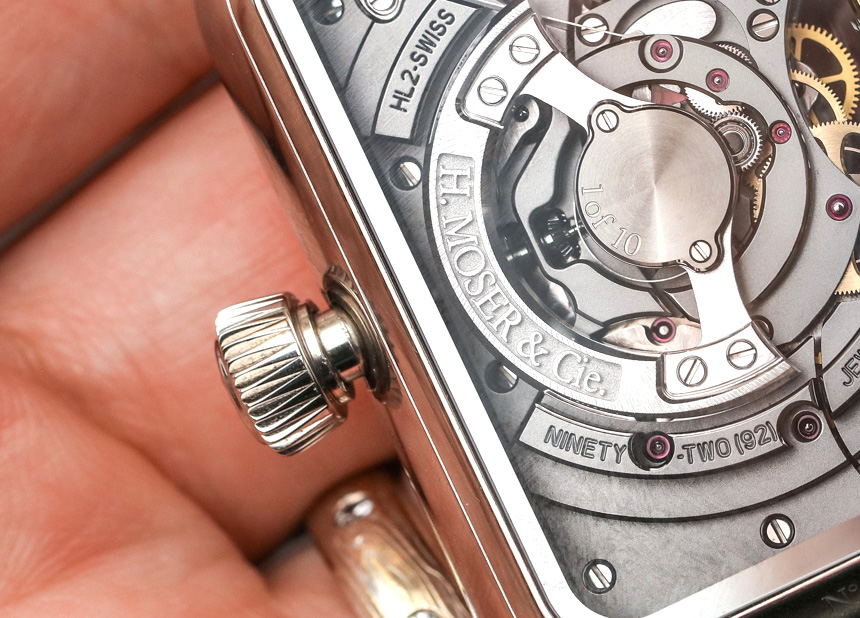 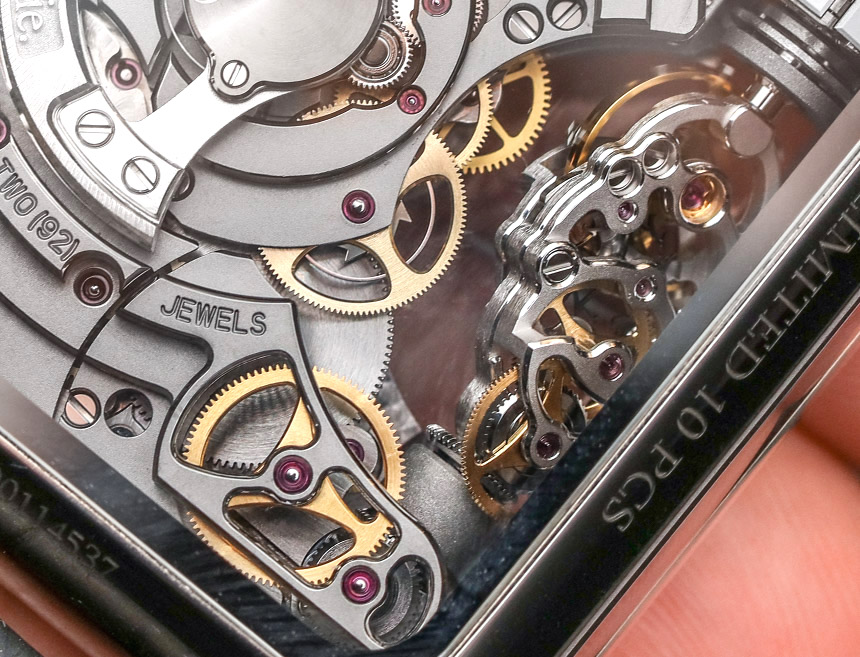 Allow me to remind you that Hautlence is owned by H. Moser & Cie – or rather, they are owned by the same entity. Hautlence began the “parts-sharing relationship” when they used an H. Moser & Cie tourbillon movement for a watch, and now they return the favor by lending H. Moser & Cie the Hautlence caliber HL2.0. It makes sense, of course, and I think the result, especially with the HL2.0, makes for an independent value proposition as both the brands treat the movement in distinct ways. 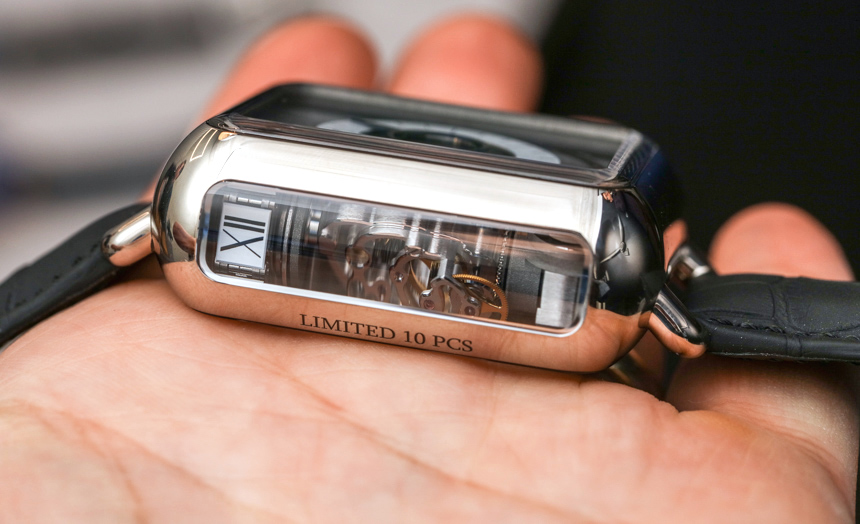 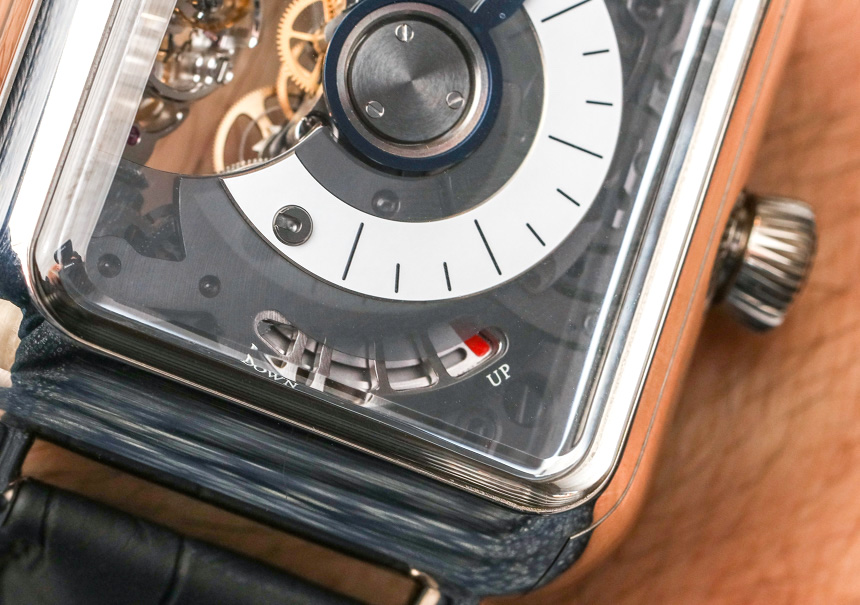 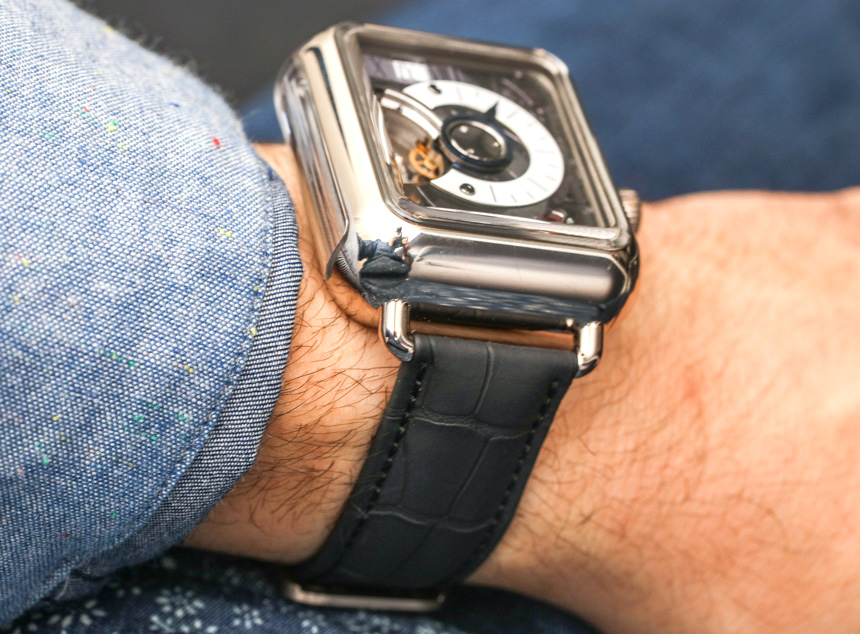 The case for the H. Moser & Cie Swiss Alp Watch Minute Retrograde is in 18k white gold for this limited edition and sized at 42.1mm wide, 18.3mm thick, and 48mm long. It’s by no means discreet, and it wears like a small bar of soap (with lugs) attached to an alligator strap on your wrist. This is essentially a ballooned version of the case which H. Moser & Cie produced that was meant to look just like the Apple Watch, but with a mechanical movement inside of it. 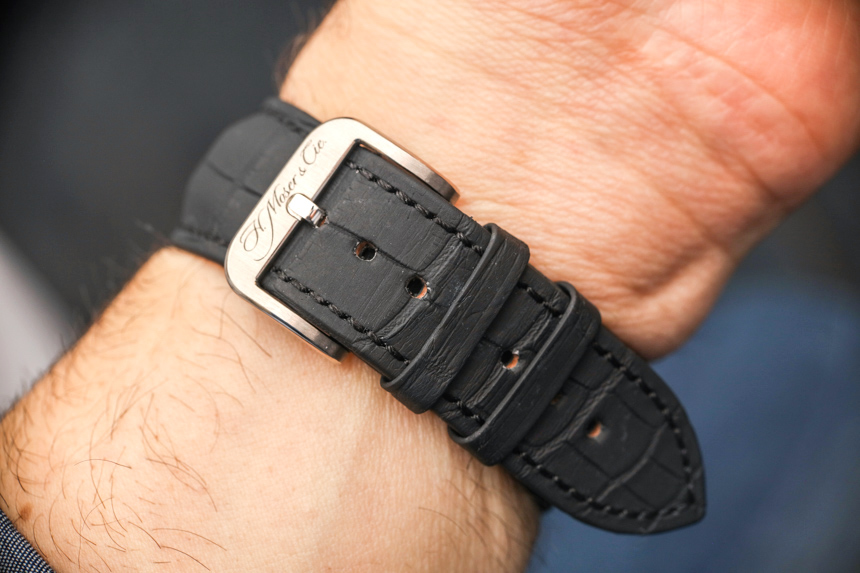 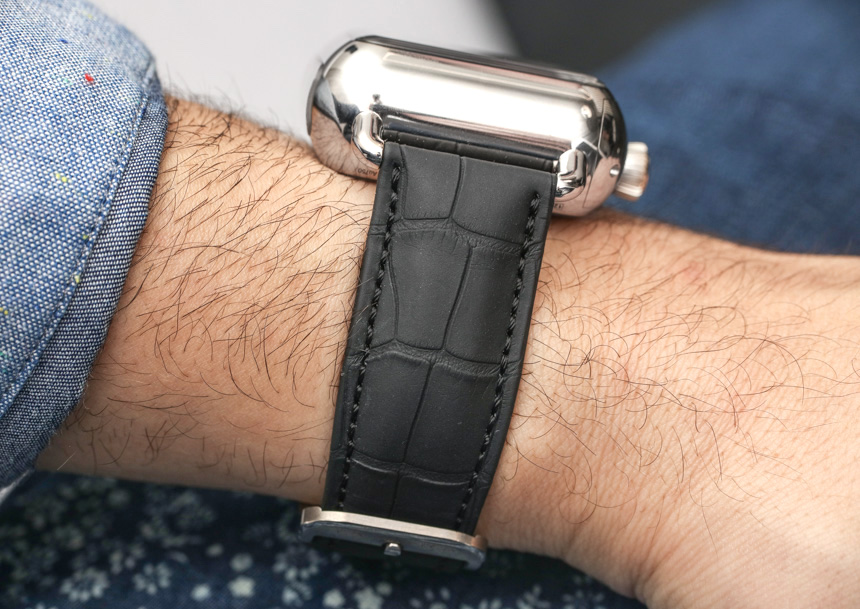 I really didn’t care for H. Moser & Cie’s “mechanical replica” of the Apple Watch. It was, in my opinion, a hostile and slightly petty move toward the technology industry, and I think it set a reactionary tone to the brand – which is a shame because that really isn’t what the people who work there are like. I think H. Moser & Cie does a lot of “outside-the-box” thinking to get marketing attention, and they succeed in that. Though, I think that sometimes doing stuff like making a watch out of cheese can be cornier than it is classy, and the entire theme of the brand should, in my opinion, be classy versus provocative in a way that doesn’t meld well with what the brand is good at from a design theme perspective. 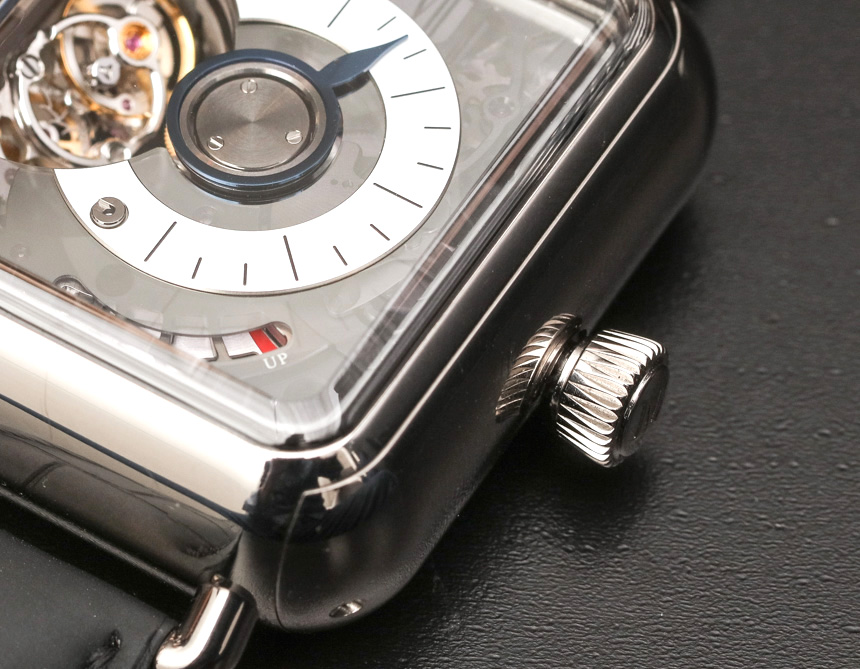 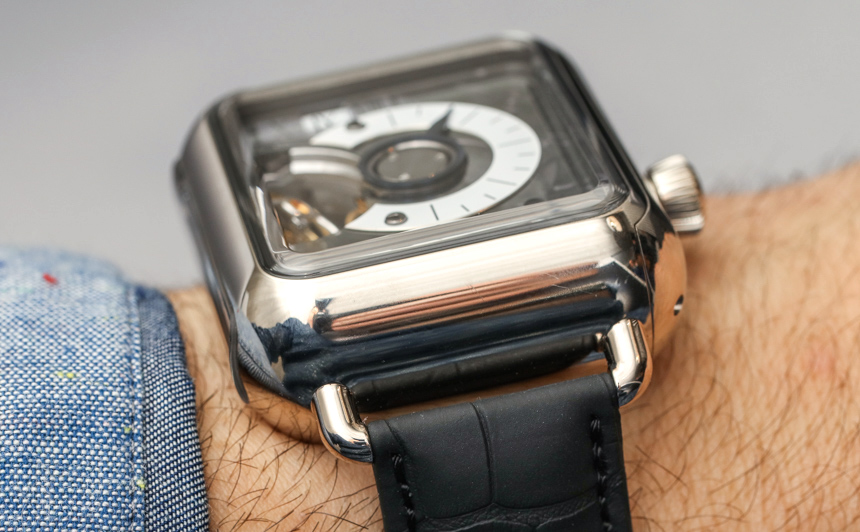 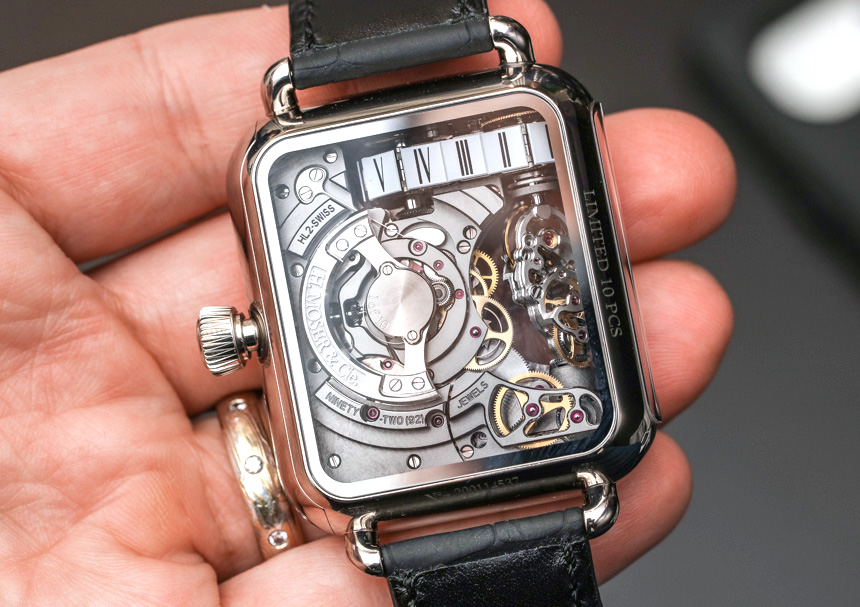 So, while I wasn’t personally a fan of H. Moser & Cie’s Apple Watch replica, I do like how that case concept grows into housing the HL2.0 movement quite nicely. The soft edges of the case help reduce its visual mass, and the side sapphire crystal window gives a nice view of the movement. Anyone familiar with the proportions of the Apple Watch will recognize the similar design cues, lugs, and overall shape, but there is enough different here for this to be the more “appropriate” answer to the Apple Watch that H. Moser & Cie was looking for. Legibility isn’t that bad either, and what you can’t really see in the marketing images, that you can when you see the watch person, is how the smoked sapphire crystal element over the movement offers a nice view to the mechanism on the inside, but allows for a lot of visual focus on the hour indicator and the retrograde minute hand. 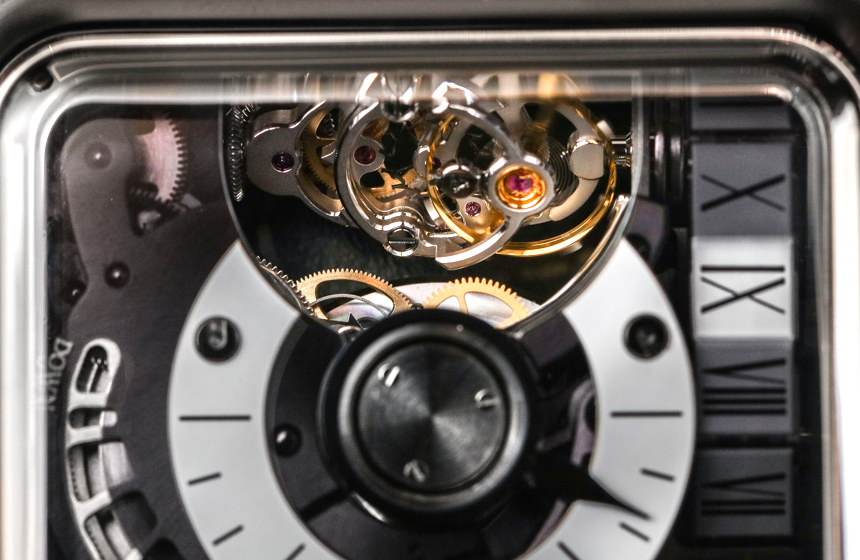 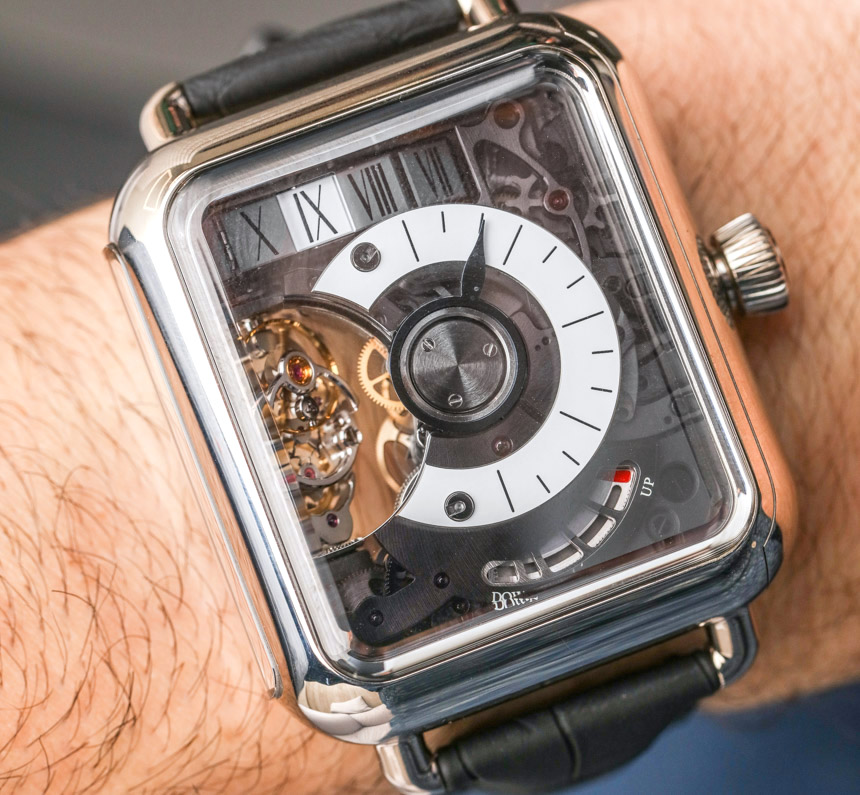