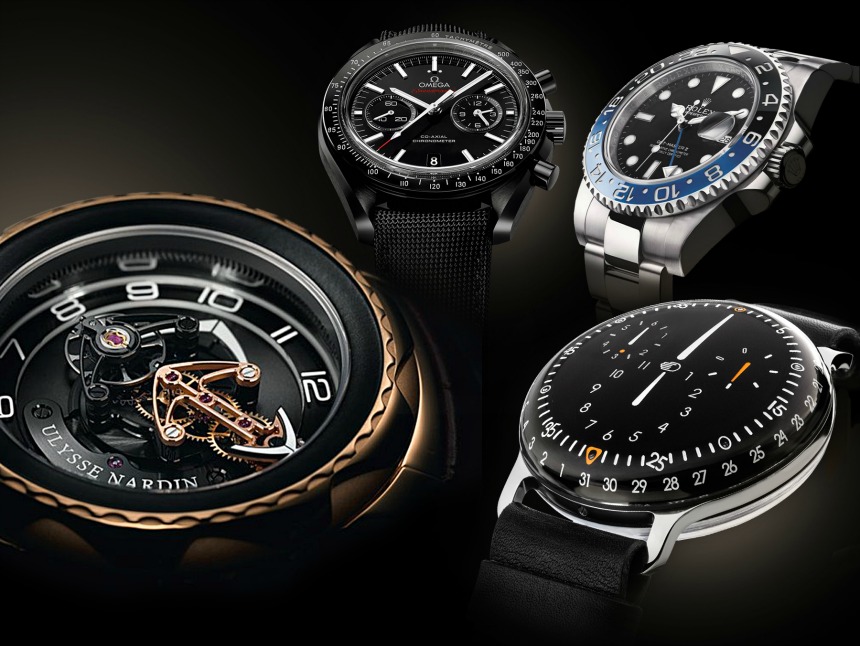 For 2013, the aBlogtoWatch watch gift guide will take the form of an editor’s and contributor’s wish list. Some of the editorial team has gone ahead and chosen a few of the timepieces from last year that are really high on their list. These are mostly newer watches, but ones that should be available for purchase now. So for this holiday season you’ll get a good idea of what we’ve personally wanted, and we didn’t include crazy stuff that no one can get, even if they could afford it.

What you may find interesting is how often watches get put on the same list. We’ve made it possible for the same watch to appear as many times as people choose them. Often guides will have each person choosing separate items so that we can maximize the opportunity to discuss as many watches as possible. These lists are completely pure and you’ll get a good indication of what some of the most popular watches are going to be.

Omega Speedmaster Co-Axial Chronograph Dark Side Of The Moon

The internal waiting list at Omega itself is about a year to buy the Dark Side Of The Moon black ceramic version of the Speedmaster Co-Axial Chronograph. Hitting retailers at about the time we publish this post, it is going to be the hot Omega for a while. What is really impressive is that the ceramic case is polished to match the steel version of the watch in a fantastically satisfying manner. Sporty and modern, yet traditional and functional, the Dark Side Of The Moon is perhaps the most interesting member of the already interesting new Speedmaster collection with its in-house made Omega Speedmaster Co-Axial Chronograph (reviewed here). Price is about $12,000.

Our favorite Belgian watch makers Ressence, captured the hearts and minds of watch lovers around the world with his liquid-filled Type 3 timepiece. A crownless case made mostly of sapphire crystal looks like nothing else on the market, and delivers elegantly bold looks and marvelous (yet unique) legibility. This is really a watch lover’s watch and it is sure to be as rare as it is cool. Though it is unceremoniously expensive at $34,000. Though for that exact price I am not sure what else I would get.

A little color can go a long way. Rolex has proved that time and time again, but with the GMT-Master II Day/Night they also showed-off a new feat of in-house developed technology. Several years ago the new Rolex GMT-Master II watch debuted with a ceramic black bezel. Now it comes in a perfectly dual-colored black and blue bezel. This is a single piece of ceramic that has two colors. Rolex uses a unique process to accomplish this, and was the first one to market with dual color ceramic parts. The Day/Night is a thematic homage to the famous red and blue Pepsi dial GMT-Master which Rolex may also release in the future once they are able to do the same with blue and red ceramic. Until then, this remains among the coolest new Rolex watches to own. Price is about $9,150.

When I first discovered the Freak watch years ago I was a bit weirded out by the “freakish” design. It wasn’t that the Freak looked bad to me, but rather that it simply looked so different I didn’t understand what it was trying to do. The Freak was only strange because it was so radically different. Years later after a lot more watch education, the Freak started to grow on me, starting with an understanding of the innovative use of silicon, complex design, and legibility despite its highly unorthodox face. I became a Freak lover, but it didn’t happen overnight. The Freak Cruiser is the most advanced “non tourbillon” Freak which means it is worlds more refined than the original. No doubt the watch is a statement, but it is a statement I want to make. Price is a dream-worthy $87,500. This is a “wish list” after all right? 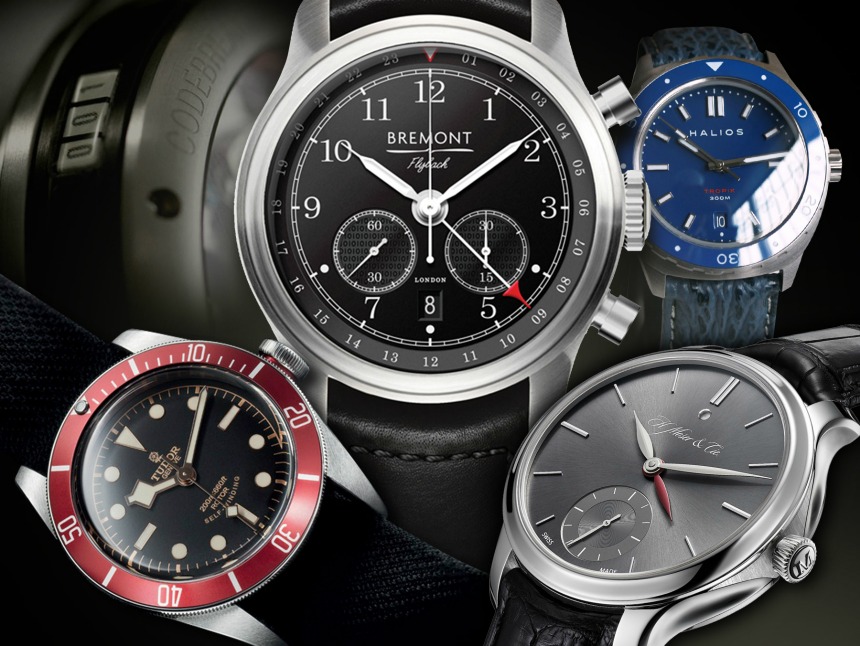 The Black Bay offers an excellent mix of distinctive vintage styling, Rolex build quality, and an easily serviced and reliable movement. The rosy-red bezel, gilt dial, and snowflake hour hand add a bit of flare to the basic Sub ethos that made Tudor and Rolex Subs the legends they are today. I like that the Tudor respects the core elements of the Sub backstory but has made the Black Bay their own. Price is $3,500.

Aside from a feature set including Bremont’s first flyback chronograph and a GMT complication, the Codebreaker serves as a tribute to Bletchley Park, home to Britain’s WWII code-breaking force. Bletchley Park had a profound impact on the outcome of WWII and thanks to great minds like Alan Turing and successfully decrypted code from the German Enigma and Lorenz machines. Each Bremont Codebreaker incorporates actual artifacts from Bletchley Park, such as the serial number which is taken from a punch card used to process information during the war. Furthermore, the Codebreaker’s winding rotor incorporates metal from an actual German Enigma machine and the crown is capped with a pine insert taken from the floor of Bletchley Park’s famed Hut 6. The mere fact that a watch like the Codebreaker even exists is wild and it may be the absolute coolest way to own a piece of WWII history. Price is $18,500.

Hey, a fella can dream, right? The H. Moser & Cie Nomad Dual Time, just look at it. Achingly pretty, the Nomad Dual Time boasts H. Moser’s first in-house automatic movement, the HMC 346, which allows for a standard time display, am/pm indication and a second timezone display. Exceedingly rare and beautifully finished and with a second timezone display, you’ll be finding any excuse to travel. Given the $46,500 price tag, this one is little more than a dream, but can you blame me?

Bringing me back to reality is the Halios Tropik, the latest diver from one of the better known and respected micro-brands. At 41 x 14mm, the Tropik is a bit smaller than previous models like the Laguna and Bluering. The bronze version has already begun shipping and the steel version, with either a blue or a black dial and bezel, also began shipping this past month. Available directly from Halios for $650, the Tropik sports a Miyota 9015 movement, a sapphire crystal and is water resistant to 300m. I’ve got my eye on a blue one and I’m just hoping that I don’t have to wait until Christmas to get it on my wrist. 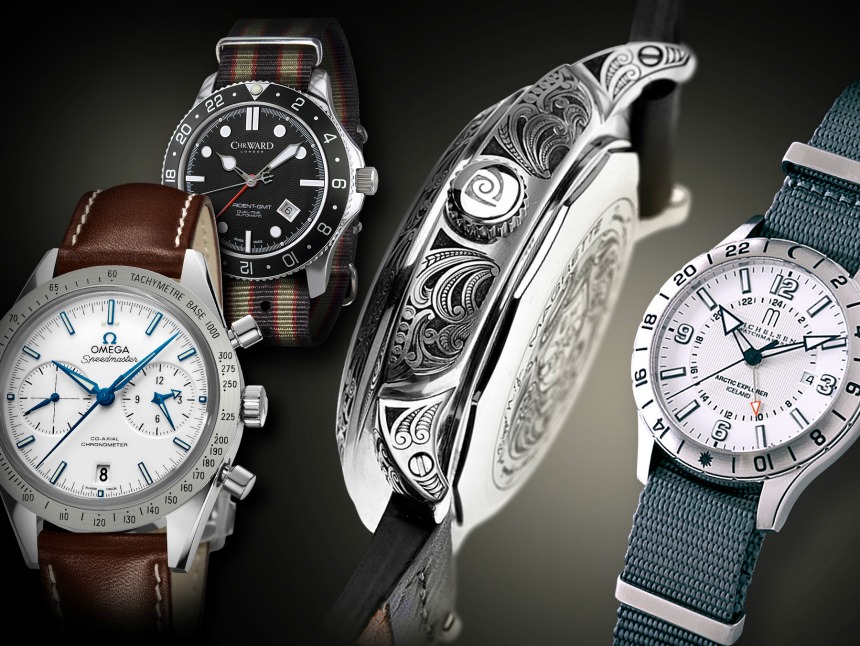 The Omega Speedmaster ’57 is one of the latest iterations of the Speedmaster line, and when I saw it in person, I was taken. I’d started to be drawn more to the Speedmaster line this year in general. At the same time, I’ve started to be drawn more to white-dialed watches – which meant that the Speedmaster that everyone knows and loves wasn’t quite my cup of tea. That was, until Omega changed the cup. Upon the arrival of the co-axial Speedmaster ’57, with its bright white dial and dual-register layout, and I became a fan. While the one I reviewed here came in yellow gold, I think I’d more likely opt for a different model. That said, I’d have a very hard time choosing between the steel model with blue dial ($9,000) and the titanium version with a white dial ($11,400). The Speedmaster has been one of the most popular sport watches since its walk on the moon, and this latest version manages to be simultaneously familiar and refreshingly different. This particular model pulls together some great elements from others in its lineup, meaning you can recognize where the watch came from, while still rocking a more modern feeling design. And hey, even if you’re a traditionalist and go for the black dial, you’re still getting some great design and history, paired up with an excellent movement. Priced from $8,000 – $30,000.

As I mentioned with the Speedmaster ’57, white-dialed watches have really grabbed my attention. Pair that with my favorite complication (a GMT indicator), and you’re running into a pretty narrow field. While the Rolex Explorer II is a good choice, I ran across the Arctic Explorer from Icelandic brand Michelsen. While the comparisons between the two pieces are inevitable, the Arctic Explorer really stands on its own. For one, it was put through some extreme testing in an Antarctic expedition in a trek to the South Pole – not exactly a forgiving environment. To survive in that, amongst other modifications, the ETA 2893-A2 (Elaboré grade) has special oils to resist the cold temperatures. While the model you and I have access to won’t have those improvements, it’s still a great watch, from both a technical perspective as well as a aesthetic one. Comparisons to the Explorer II are inevitable, and while I think they’re similar (and I did almost put the Explorer II in this list), I think this one stands on its own, not as an homage, but a new watch with some inspirations from the Rolex. Priced at $1,950.

Magrette is one of those brands that I became instantly familiar with when I first started writing about watches, and their cushion-cased designs have just clicked for me. For all of their lineup I’ve written about, though, I’ve always kept an eye on the two higher-end pieces they have in their lineup. My favorite of the two would be the Moko. To get the Moko, they start off with their very familiar case and build (what looks to be) a Moana. However, rather than the Miyota movements we’re familiar with, this one carries an ETA 2824-2. Before that assembly occurs though, Andrew Biggs picks up his engraving pen, and creates an amazing piece of art. Utilizing a Manaia mask (which repeats), the case takes on the feel of a Maori tribal tattoo – and becomes something amazing. Hand-engraving truly is an art, and Mr. Biggs has really helped to elevate this Magrette. As there are only 10 pieces worldwide (plus the upgraded movement and hand engraving), pricing comes in at a level we’re not used to with Magrette: $4,485. From what I see in the pictures, though, it would be worth it.

I’ve long been a fan of what Christopher Ward has been producing, and to me, their C60 Trident design is one of the best in their more affordable lines. Back when I reviewed the C60, I was really taken by the overall styling, fit and finish, and the multi-color lume. Now, with the addition of the GMT complication, you’ve got (in my estimation) one great bargain, both in terms of price and utility. While there are a handful of dial and bezel colors available in the other C60 models, the GMT comes only with a black dial, and your choice of white or orange indices, with my favorite being the one with the white indices. There are also a variety of strap choices (leather, nylon, or bracelet), but my favorite (which also was on my earlier review model) is the black/maroon/olive NATO – just a classic combination to go with this watch. That also makes it rather simple for swapping in other straps, which of course is another way to freshen up a watch you’ve had for some time. At an asking price of $845, this is also quite an affordable piece of kit… more »