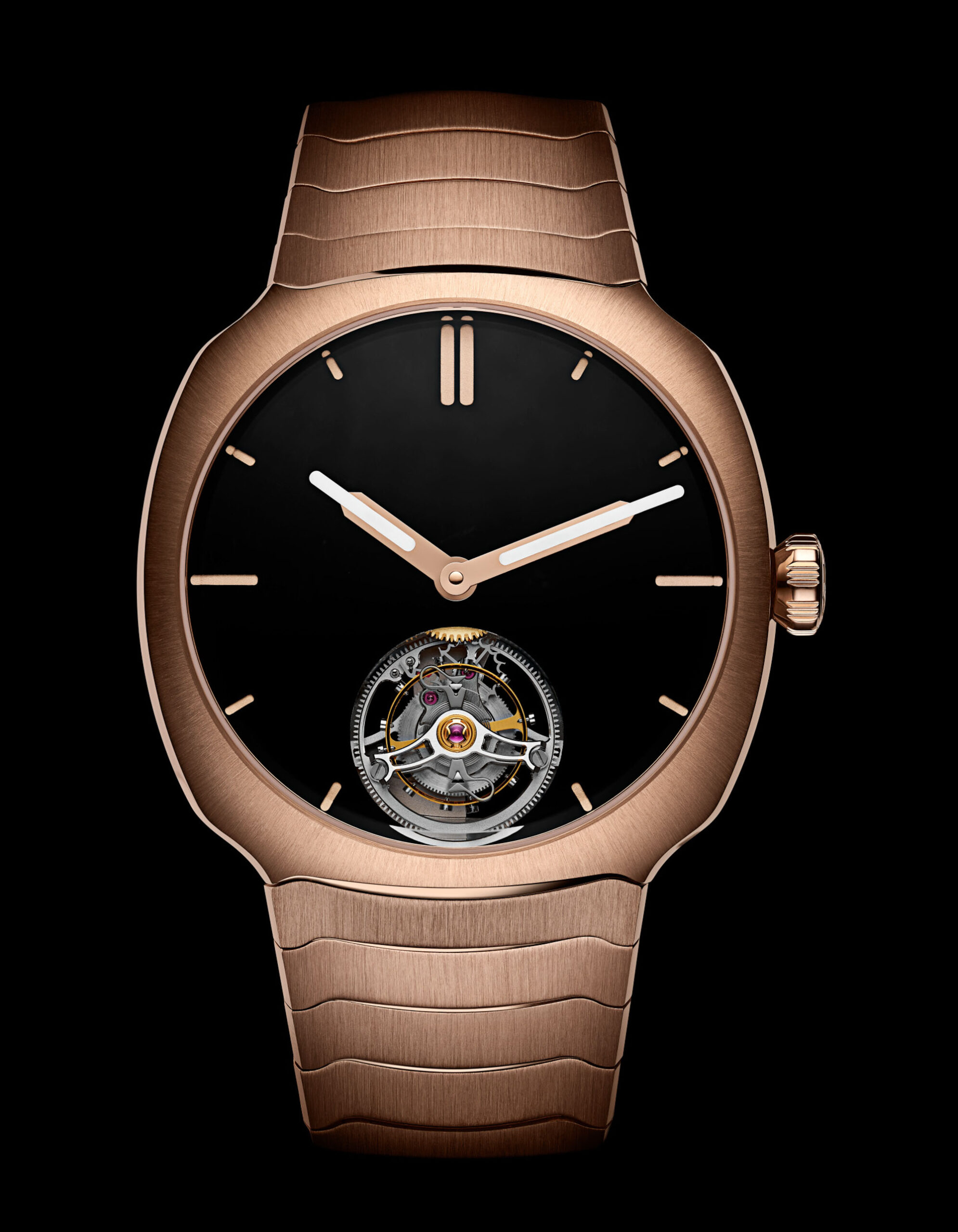 Although the Streamliner has only been around for a few years, the model has already become one of the designs most emblematic of H. Moser & Cie. as a brand. Similarly, while the material Vantablack has only existed for about a total of a decade, Moser has already featured the advanced light-absorbing substance on a number of different timepieces and is arguably the single luxury watchmaker most associated with Vantablack. Earlier this year at Watches and Wonders 2022, Moser teased a concept piece consisting of a Streamliner Flyback Chronograph with every single visible component except the hands covered in Vantablack, and many took this as a sign that we might be seeing some more Vantablack appear on Moser’s Streamliner collection in the near future. While previous Streamliner models have all featured their cases and signature integrated bracelets crafted from stainless steel, the new H. Moser & Cie. Streamliner Tourbillon Vantablack ref. 6804-0400 turns things up to an entirely new and luxurious level with a solid red gold case and bracelet, along with a flying tourbillon and a Vantablack dial. 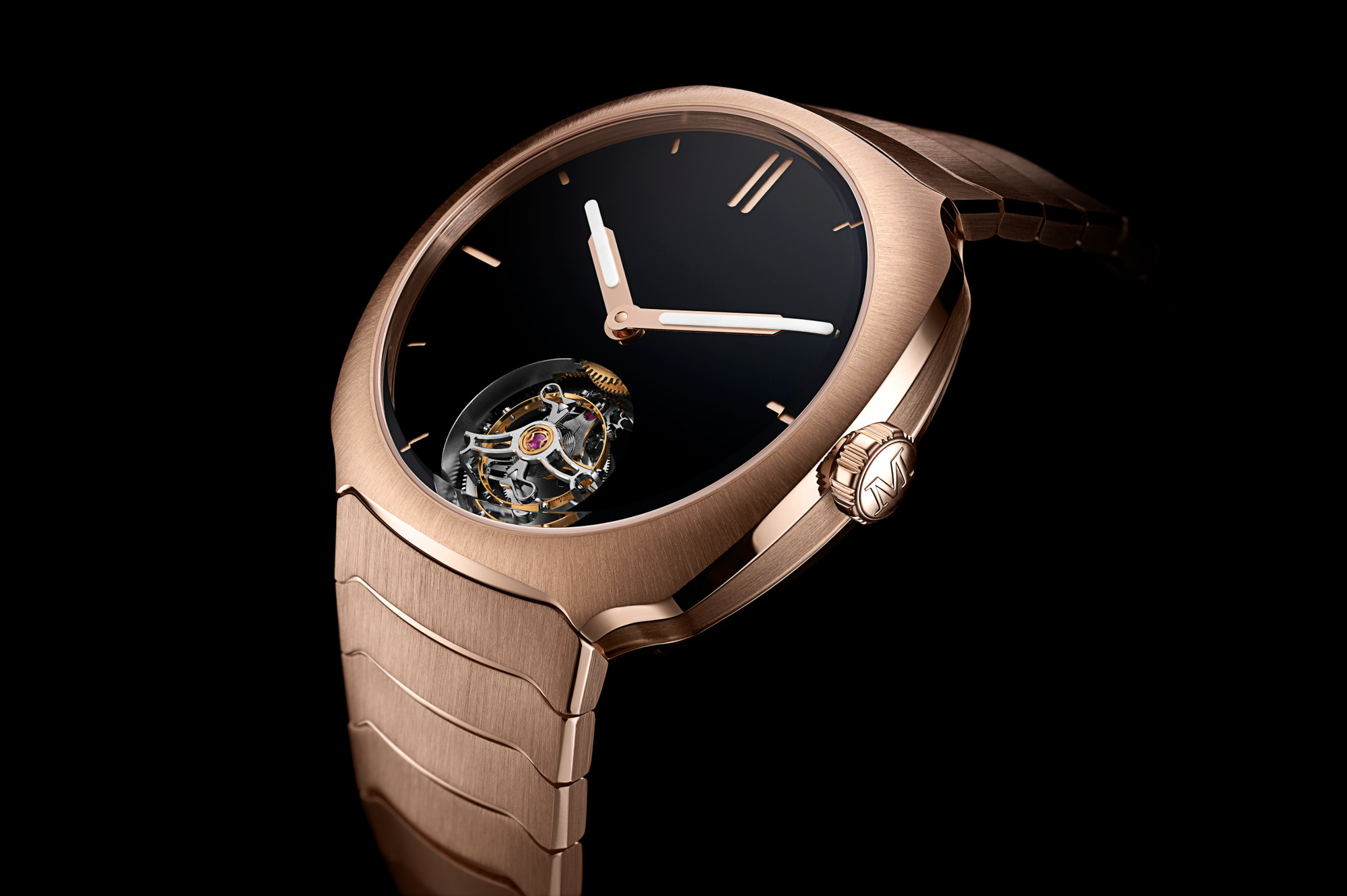 The 5N red gold cushion-shaped case of the Moser Streamliner Tourbillon Vantablack measures 40mm in diameter and it comes in at a total of 12.1mm-thick (or 10.3mm if you don’t include its domed sapphire crystal). A screw-down winding crown adorned with Moser’s “M” logo works with the model’s screw-on display caseback to provide the H. Moser & Cie. Streamliner Tourbillon Vantablack with a respectable 120 meters of water resistance. While the Streamliner’s case is certainly distinct, the collection’s most defining visual feature is easily its integrated bracelet, which offers an almost biomorphic appearance and attaches directly to the case with a highly fluid design that does not incorporate any form of traditional lugs. The various components of the solid 5N red gold case and bracelet are meticulously finished with brushed surfaces and contrasting high-polished accents, which must be perfectly executed in order to maintain the model’s signature fluid aesthetic. Meanwhile, a butterfly-style clasp offers a continuous appearance on the underside portion of the wrist. 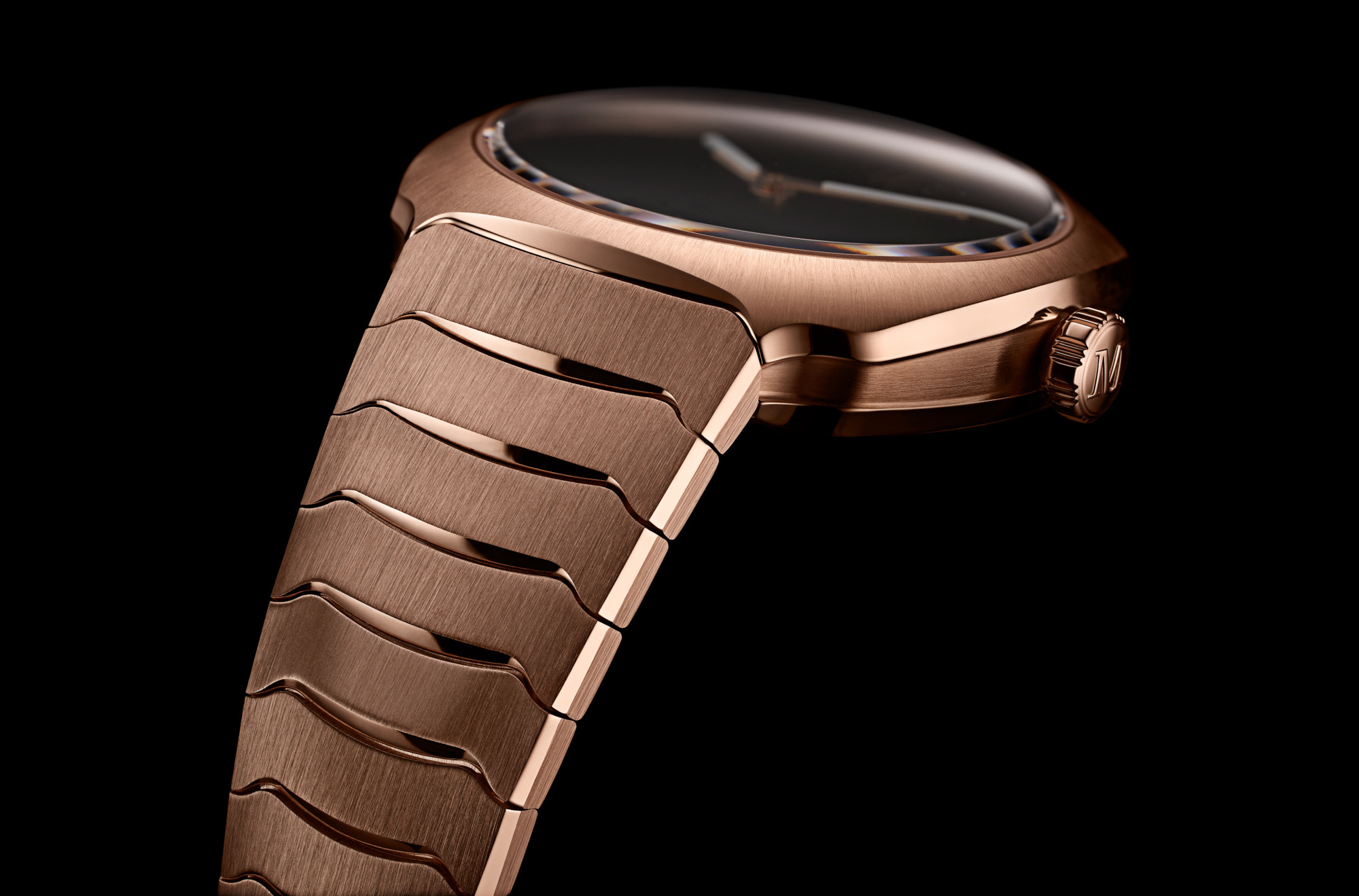 Despite having a large flying tourbillon prominently featured at the 6 o’clock location, the overall dial design of the H. Moser & Cie. Streamliner Tourbillon Vantablack is significantly more paired back than those that can be found on the rest of the Streamliner series, which often feature bright colors and checkered racing-style minute tracks. Two centrally mounted red gold hands fitted with luminous Globolight inserts display the hours and minutes, while the large one-minute flying tourbillon functions as a running seconds indicator. The Vantablack surface of the dial is punctuated by applied red gold hour markers, which are fixed from the back using a plate in a manner that preserves the Vantablack’s vertically aligned nanotube structure and allows the dial to fully take advantage of the substance’s unique properties. Since the entirely of the surface is finished with Vantablack and absorbs 99.965% of all visible light, the applied red gold hour markers appear to sink into the dial when viewed at certain angles, while the one-minute flying tourbillon held by skeletonized bridges is intended to appear as if it’s slowing rotating within the void of a black hole. 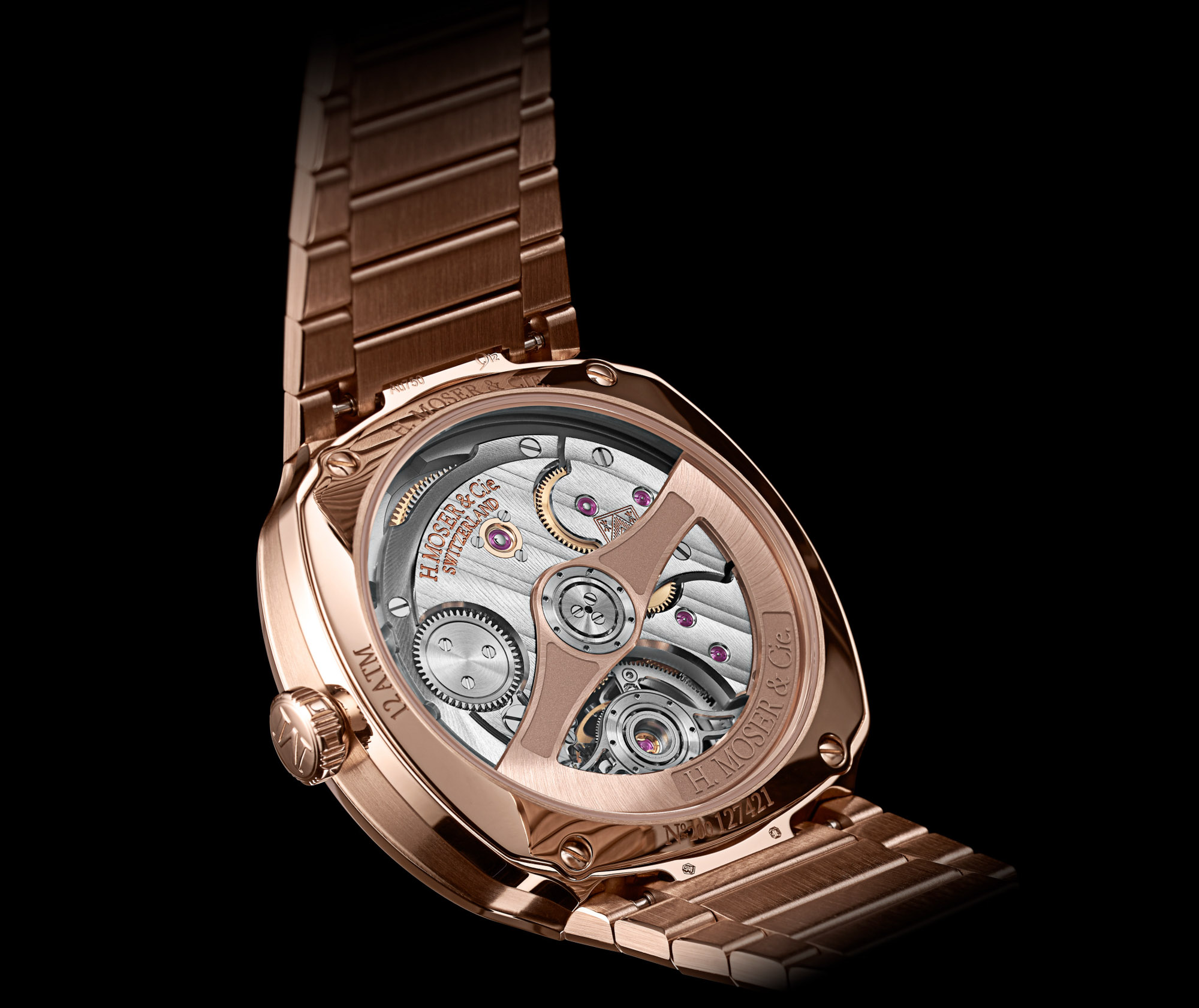 Powering the H. Moser & Cie. Streamliner Tourbillon Vantablack is the brand’s in-house HMC 804 automatic movement. Running at a frequency of 21,600vph with a three-day power reserve, the HMC 804 features a double hairspring created by the brand’s sister company Precision Engineering AG. With a pair of matched hairsprings, the movement of the point of gravity on each one when it expands is corrected and the effect of friction reduced, which Moser states significantly improves accuracy and isochronism compared to more traditional designs. Like all of Moser’s movements, the HMC 804 is beautifully finished and its bidirectional automatic winding functions are achieved by a solid 18k red gold oscillating weight that is engraved with the H. Moser & Cie. logo and perfectly matches the red gold case and bracelet of the watch. 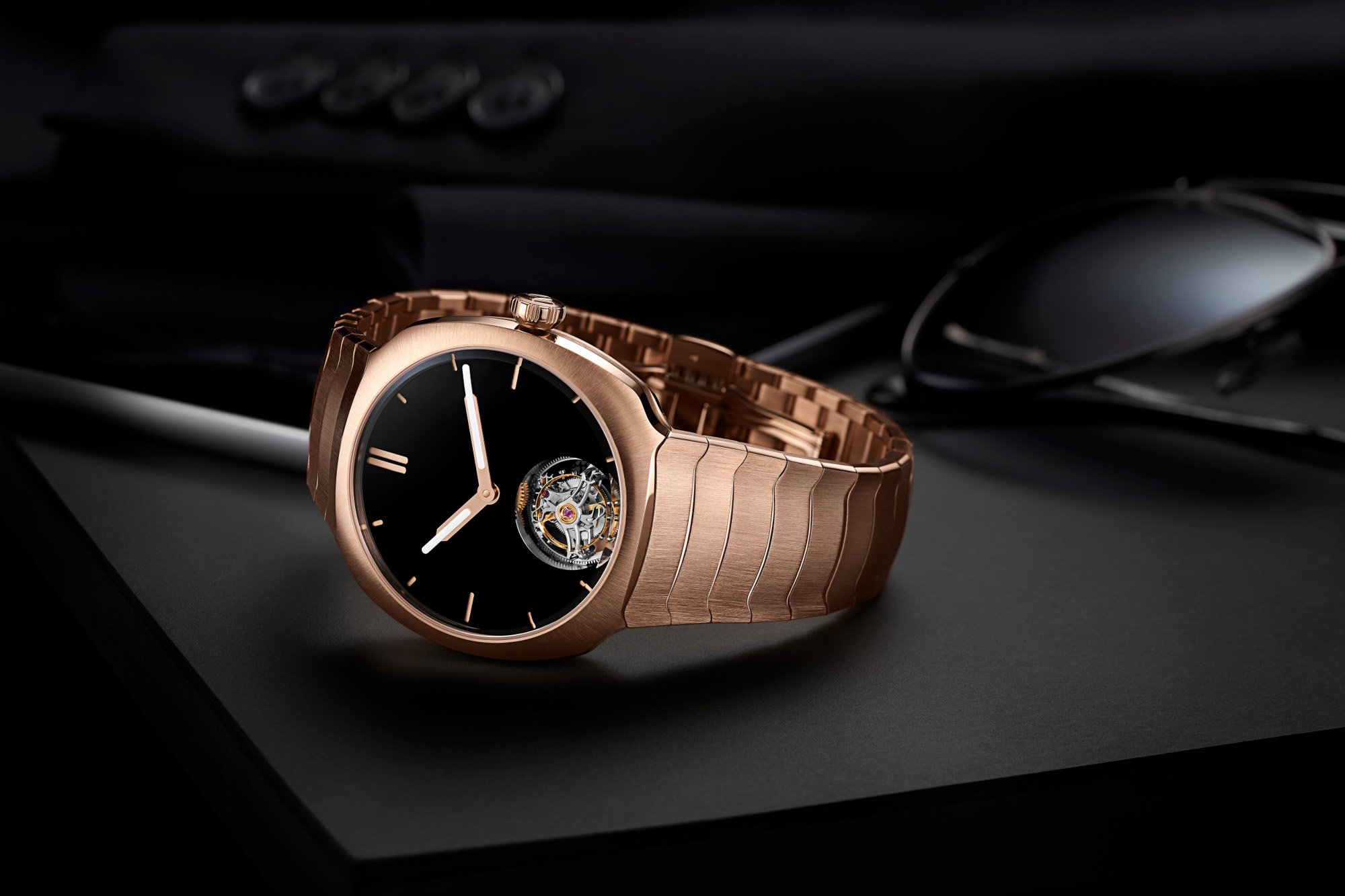 Despite being an integrated bracelet sports watch, the H. Moser & Cie. Streamliner looks absolutely nothing like the Genta-inspired designs that typically come to mind when someone thinks of this highly popular category of timepieces. Regardless of whether a person loves the look of the Streamliner or hates it, it’s undeniable that the watch’s design elicits a reaction from people when they see it, and these types of timepieces are the ones that ultimately move this entire industry forward and create progress. Additionally, given how different the Streamliner is compared to the rest of Moser’s catalog, it only makes sense for the brand to expand its bold and instantly recognizable design language into an entire lineup of timepieces, with this new model being the most luxurious execution of the Streamliner produced thus far, and the very first one to be crafted from solid gold. As the most luxurious, it is also naturally the most expensive, and the H. Moser & Cie. Streamliner Tourbillon Vantablack ref. 6804-0400 is accompanied by an official retail price of $119,900 USD, although production will not be limited to a specific number. With that in mind, considering that Moser produces fewer than 1,500 watches per year, you can almost guarantee that only a relative handful of those will end up being these solid gold Streamliner watches fitted with flying tourbillons and Vantablack dials. For more information, please visit the manufacturer’s website.