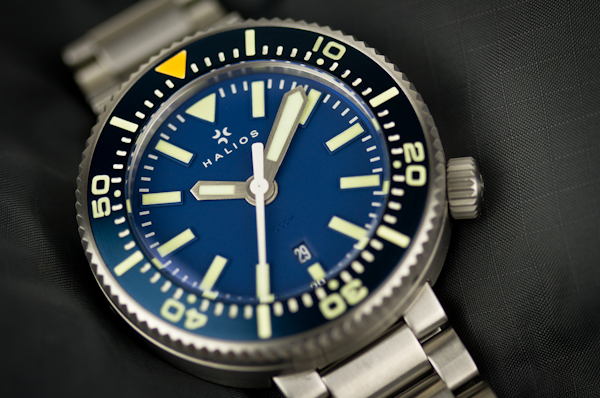 In the competitive world of the independent and online-only watch brand, Halios is widely considered to be a cut above the rest. I’ve actually had the pleasure of reviewing all of their past models, the Holotype, the Bluering, and the Laguna, finding them to be nicely made and rather unique interpretations of the modern dive watch. Their fourth model is the 1000M and it is known by both Halios and their customers as “The Puck”, a nickname obviously derived from the cylindrical nature of its case. The Puck is a decidedly more niche affair than Halios’ past models and presents a rather hardcore and large-sized take on the tool diver. 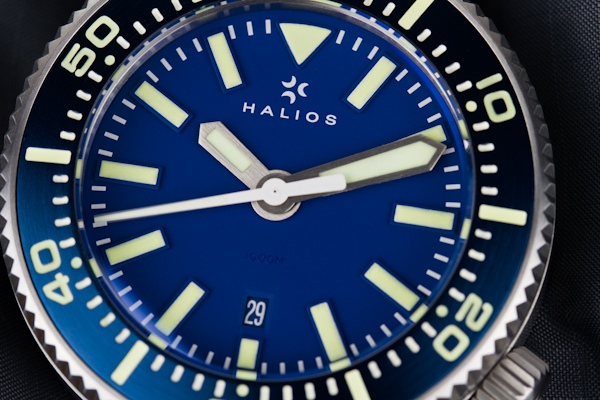 The 1000M is every bit as large as it looks, measuring at 47 mm across and 11.5 mm at the case edge with the thickness increasing to 15.5 mm at its center thanks to the case back and double domed sapphire crystal. The case shape and large hands will draw comparisons to the Seiko “Tuna” line of divers (see examples like the Seiko SBBN007) and, aside from the Tuna’s hooded bezel protector, I can see the similarity. Both are large and fairly stoic tool-style divers that offer a magnified wrist presence backed by practical dive attributes like big water resistance, highly legible time displays, and dive-ready bezel implementation. 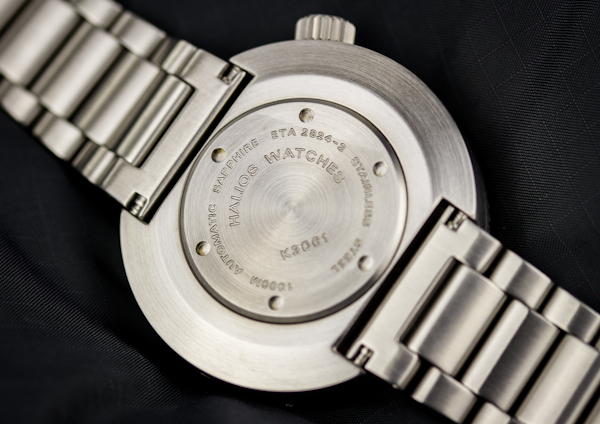 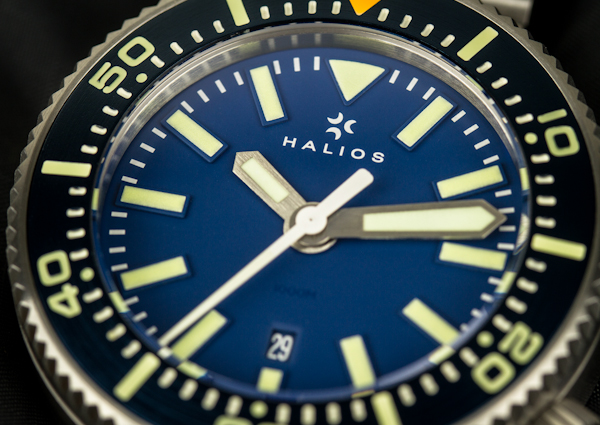 To put it simply, the case of the Halios 1000M is pretty great. Essentially a cylinder with fully integrated 24mm lugs, there is something almost modernist about the 1000M’s shape. The form and the lug design will be instantly familiar to anyone who has owned a Xetum or one of Braun’s lug-less watches (see video). Being a diver, the Halios also features a nicely integrated dive bezel that does not interrupt the lines established by the case shape. The 1000M carries a brushed finish to suit the tool vibe projected by the large screw down crown and automatic helium escape valve. 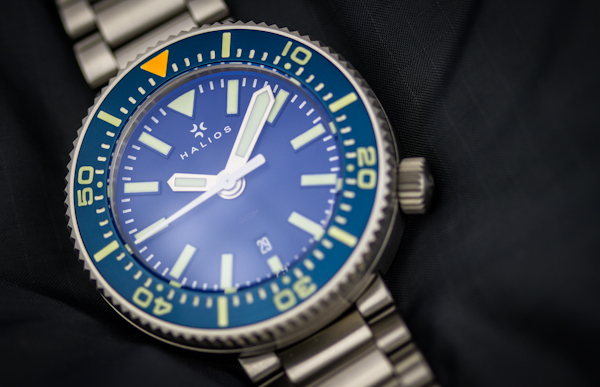 The bezel is one that has clearly been designed for actual use and boasts a 120 click unidirectional countdown travel. On the blue model reviewed here, the bezel is an iridescent blue that appears darker at times but flashes brightly in direct light. Featuring a fully lumed scale and a clear typeface, the grip on the bezel’s edge is a cut-out style that works well even with wet hands. The 1000M’s bezel is mounted via screws around the case side and it does exhibit a very small amount of play between clicks, although not noticeable in normal on-wrist use. 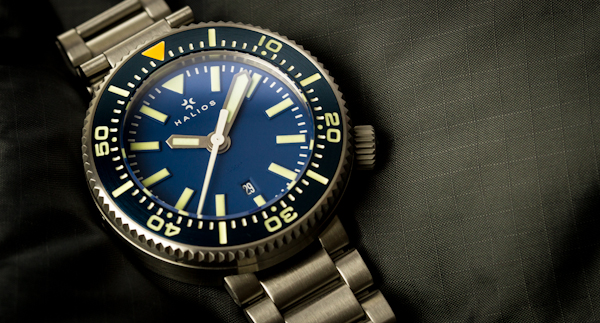 As with all Halios models, dial design is as minimal as possible with no extraneous text or graphics. The Halios name and logo are painted at 12 o’clock and the model name “1000M” is printed at 6 o’clock, above the date aperture. This model tag is very subtle and appears to have been printed in a shade of blue that is just slightly darker than the dial’s color. This effect is the same on both the black dial stainless steel version and on the DLC 1000M Puck, where Halios has opted for what appears to be a very dark grey for the label on the black dial models. I have always enjoyed the spartan dial design of Halios’ past models, and the 1000M is certainly no exception. 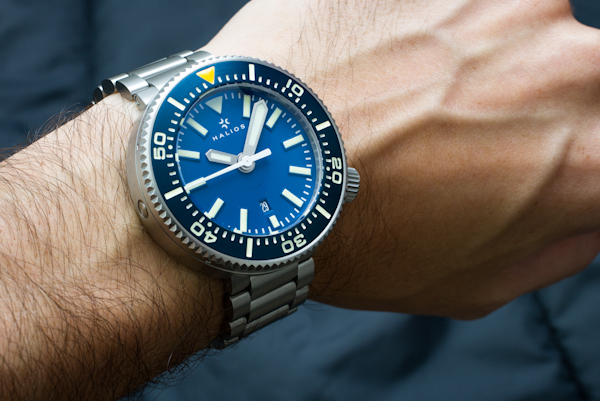 On wrist, the Halios 1000M is visually quite large and feels noticeably heavy, weighing in at 223g including the bracelet with all of its links in place. Once my wrist had acclimated to the additional weight, I found the 1000M to be surprisingly comfortable. I generally find large watches with unconventional case shapes to be clunky or difficult to keep seated on the flat part of my wrist but the 1000M wears really well. That said, it does look really big, which is definitely part of the appeal. The 24mm brushed stainless steel bracelet is a three piece style with screwed links and a fold over clasp. The bracelet tapers to 20mm at the clasp and the clasp offers a total of five micro adjustment positions along with a somewhat too-easy-to-open wetsuit extension.

The Halios 1000M is powered by the ETA 2824 movement which is a movement currently found in many watches and, while some of us may be bored at the thought of yet another watch with a 2824, ETA is restricting the supply of these movements which will increase the costs to both brands and buyers and eventually force many brands to consider sourcing different movements altogether. Yes, the 2824 is a fairly boring movement, but it is also reliable, capable, comparatively cheap to service or repair and can be regulated into excellent timekeeping. 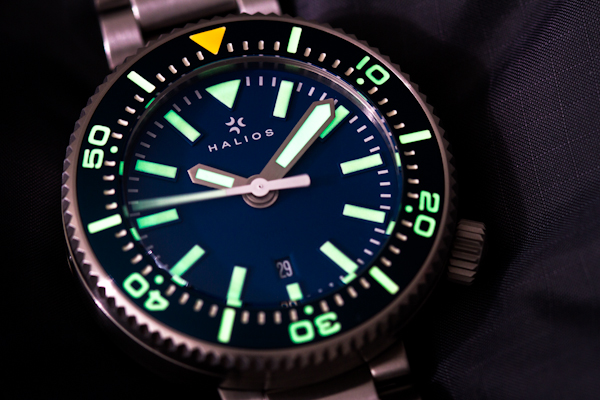 If you have had a Halios in the past (or read one of my past reviews), you will know that the lume is always a strong point for their watches. The 1000M, with its diving intentions, does not disappoint when it comes to low-light visibility. With large hands and markers offering ample room for Superluminova, the effect is bright, legible and long lasting for both the dial and the fully lumed bezel scale (see video for another view). 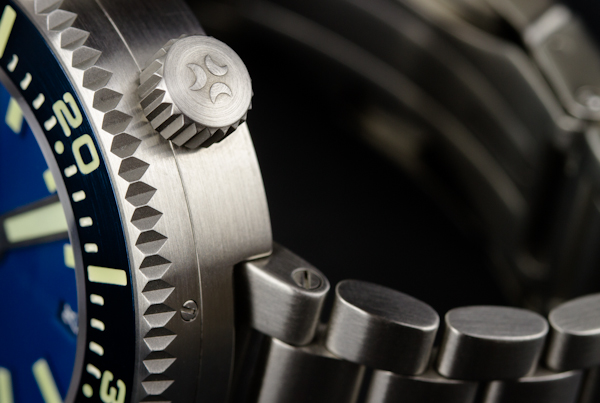 The Halios 1000M “Puck” is without a doubt a niche design that won’t appeal to everyone, but where is the fun in mass appeal? If you favor an entertaining, nicely built and unique oversized diver, the 1000M was made for you. Crisp design, multiple color options and dive-ready credentials make this odd-child from a tiny Vancouver-based brand a very intriguing option. The model featured in this review can be ordered directly from Halios for $780 USD in either blue or black with the watch, bracelet, and a rubber dive strap delivered in a small water resistant dive case. If you prefer something a bit more sinister, consider the 1000M DLC which forgoes the bracelet for a black rubber strap and can be had for $855 USD. Halios have developed a reputation for excellent customer service and a “go their own way” attitude towards indie sport watch design. Having experienced everything that Halios has made so far, it is safe to say that they are actively evolving and developing a signature look and feel, which is rare at this price point. Those looking for a big watch that is in no way flashy or ostentatious, The Puck is waiting.