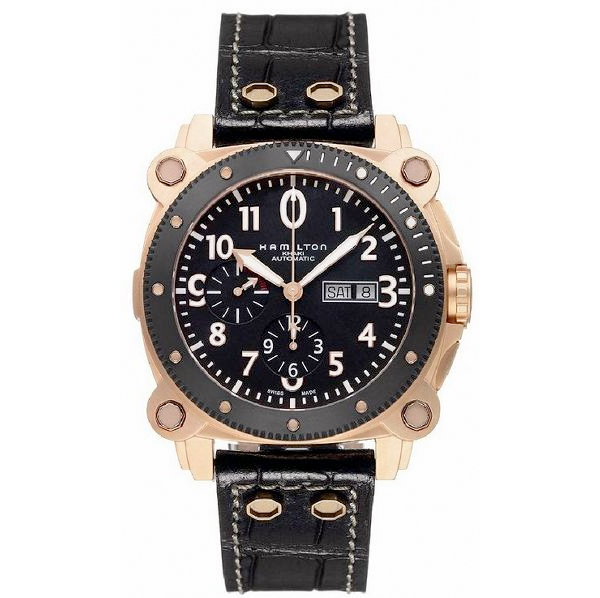 There was a lot of controversy over the three-handed Below Zero watch that Hamilton released within the last year. I spoke about it here, and suggested that it had a subtle art deco styling. A good deal of people disagreed, while many saw exactly what I was talking about. I didn’t realize a little bit of art deco was something to disagree over. Suffice it to say that the original Hamilton Below Zero was an acquired, or at least subjective taste.

Now Hamilton is about to release the chronograph version of the Below Zero watch, and have made more changes than expected. Other than the addition of the chronograph via an ETA Valjoux 7750, check out the subtle changes all over the case and dial. You’ll notice that the case has been “de-avant-garded” a bit. The bridge between the lugs has been removed. I actually liked this bridge a lot. It said “Hamilton” on it and look edinteresting giving the strap a nice integrated look. Click above on the link to the original Hamilton Below Zero article to see what I am talking about.

Other than the steel version you’ll find a rose gold plated version. This gives that watch a nice look without putting the cost into the super high echelon. On the face the hands have been altered as well. The hour hand is now a thick pointed arrow. Actually, the transition to having chronograph dials integrated into the dial was well done, and the clutter is minimal. Although there is a fair bit of information on the dial, the hands stand out nicely, and I can find myself really trusting this watch as a timing tool. Like the original Below Zero watches, you’ll get a large “0” at the top of the face instead of a “12.” Nice addition of character there.

There is one major problem with the watch that I cannot seem to understand. Hamilton removed the third chronograph dial on the top that is meant to serve as a chronograph minute counter. It leaves room for the branding, but now I have no idea how to use the chronograph. You are merely left with a chronograph that counts seconds and total 30 minute increment up to 12 hours. What a serve handicap Hamilton?! Maybe I am missing something, but this is curious indeed. UPDATE: I wrote a follow up article to this massive problem on the Hamilton Below Zero Chronograph right here.

The size of the watch is 46mm, and over 16mm thick. On the back you’ll find an exhibition window, which reduces the water resistance to 200m from 300m. Pretty standard. This is a large size watch. Which I like. Lastly you will see the new strap options. The original Below Zero has a rubber strap, but nicely stitched leather straps with the same hexagonal screws are used for the chronograph models. Overall, the Below Zero is a good value at about $2000 retail. You are likely to find it for a fair amount less, which is good for a nice looking watch like this that seems to combine diver, military, and pilot watches, retain its own sense of character.