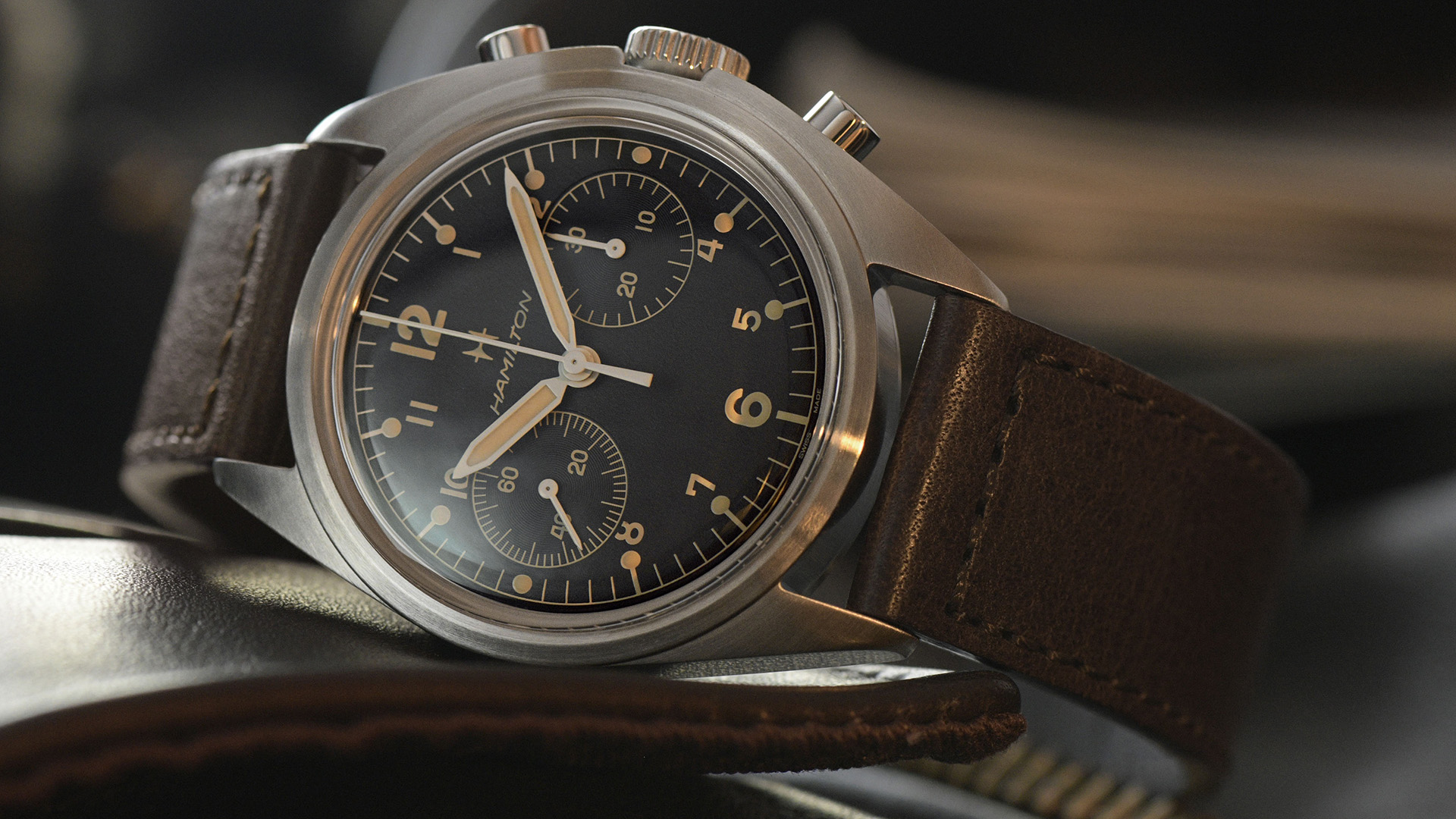 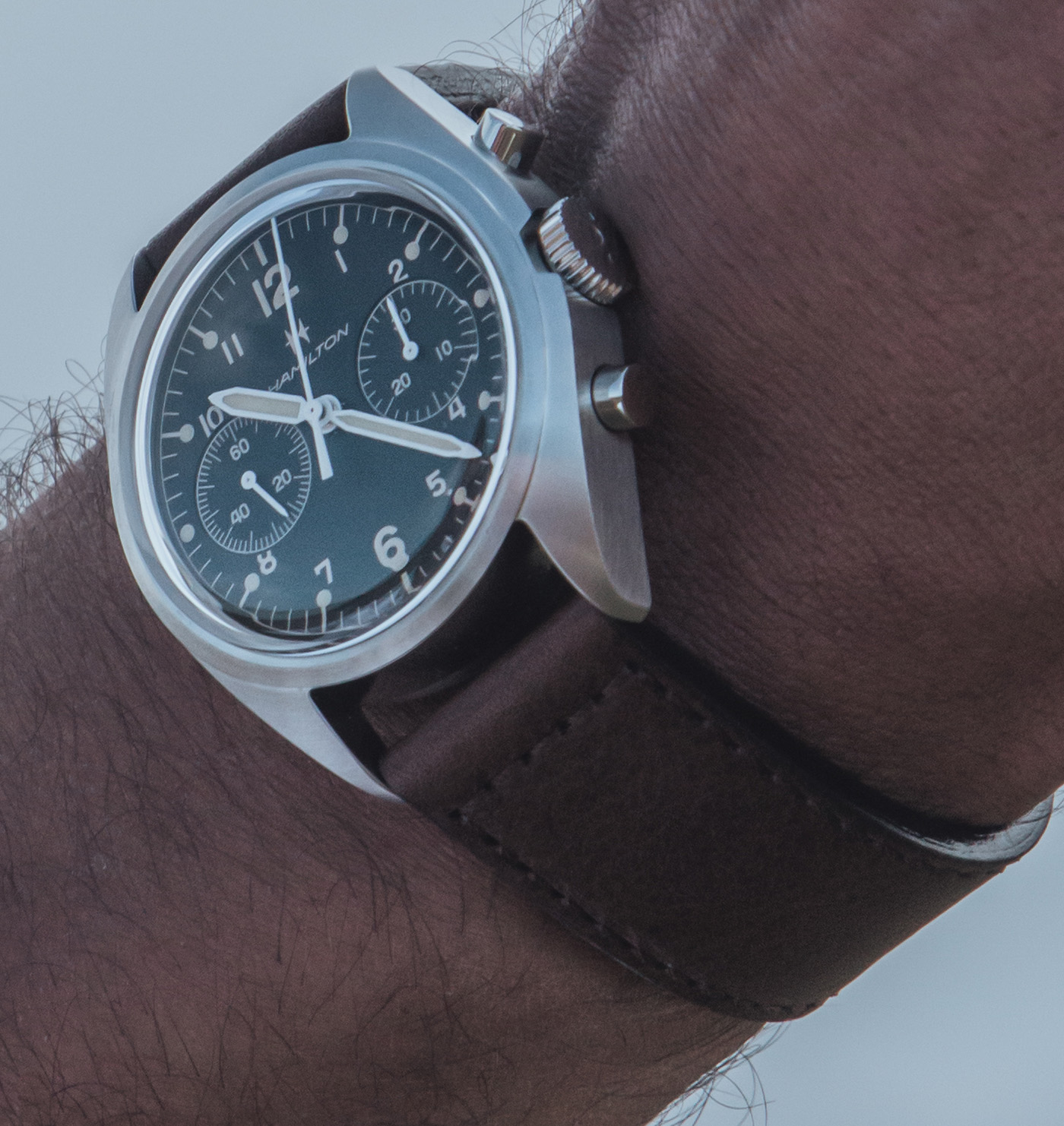 Among military watch collectors, the “Fab Four” chronographs from Hamilton, CWC, Precista, and Newmark remain some of the most popular and collectible pilot’s chronograph designs ever made. First issued to the British Royal Air Force in the early ‘70s, the “Fab Four” or 6BB chronographs, as they are officially called, remained in British military service until the early ‘80s before being replaced by quartz chronograph designs from Seiko. This status as the last of the RAF mechanical chronographs has kept original examples highly sought after over the years, and Hamilton has used the series as a wellspring of inspiration for new models as well. However, none of these previous “Fab Four” reimaginings have attempted to faithfully recreate the ‘70s original — until now. With a nearly identical look to its RAF-issued progenitor, handsomely nuanced details, and an impressively capable modern movement, the new Hamilton Khaki Pilot Pioneer Mechanical Chronograph is an attractively appointed revival of one of the brand’s most famous military models. 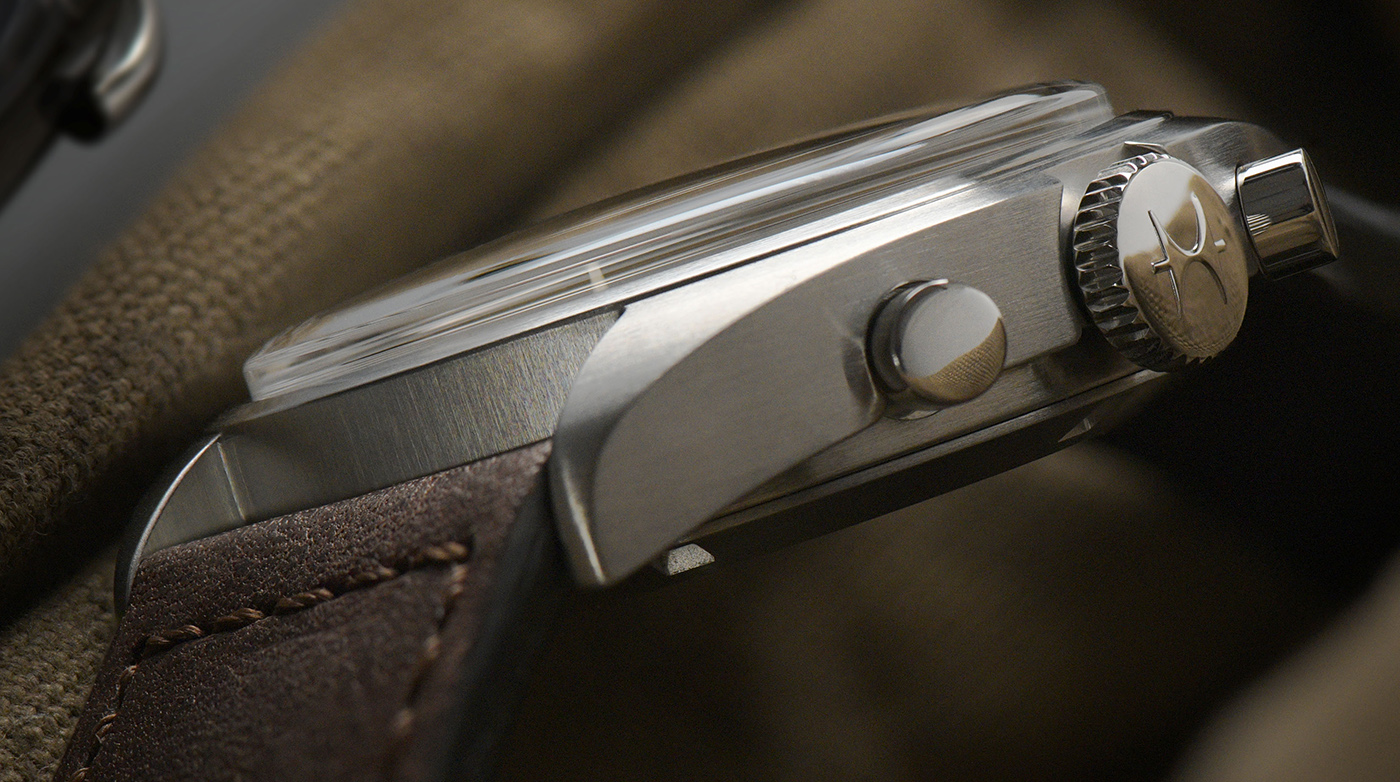 A hair larger than its ‘70s forebear at 40mm-wide, the stainless steel case of the Hamilton Khaki Pilot Pioneer Mechanical Chronograph should nonetheless offer a suitably compact and vintage feel on the wrist. The overall form is carried over faithfully from the original, from the tapering unchamfered lugs to the gently sloping smooth bezel. Of course, the most striking element here is the asymmetrical case profile. Although less pronounced than some other RAF-issued chronographs of the period, the 3 o’clock case side bulges outward noticeably in images to partially protect the crown and the large cylindrical pushers. It’s a unique, muscular look in images, one which sets the Khaki Pilot Pioneer Mechanical Chronograph apart from other pilot’s chronograph designs at a glance. The fully brushed case finish helps to reinforce the design’s utilitarian, military-issue pedigree in images, while the polished pushers introduce a subtle highlight while drawing focus towards the flared case side. Hamilton continues the faithful military-issue look through the watch’s caseback, where simple engraved lines of text over a radially brushed background call to mind the original 6BB’s caseback serial numbers (unfortunately Hamilton was unable to provide images of this caseback prior to press time). The Khaki Pilot Pioneer Mechanical Chronograph’s thickness may prove divisive, however. Like 2021’s Intra-Matic Chronograph H, this should sit markedly tall on the wrist for a hand-wound chronograph design, measuring in at a substantial 14.35mm-thick. In keeping with the Khaki Pilot Pioneer Mechanical Chronograph’s rugged military heritage, Hamilton rates the watch for a solid 100 meters of water resistance. 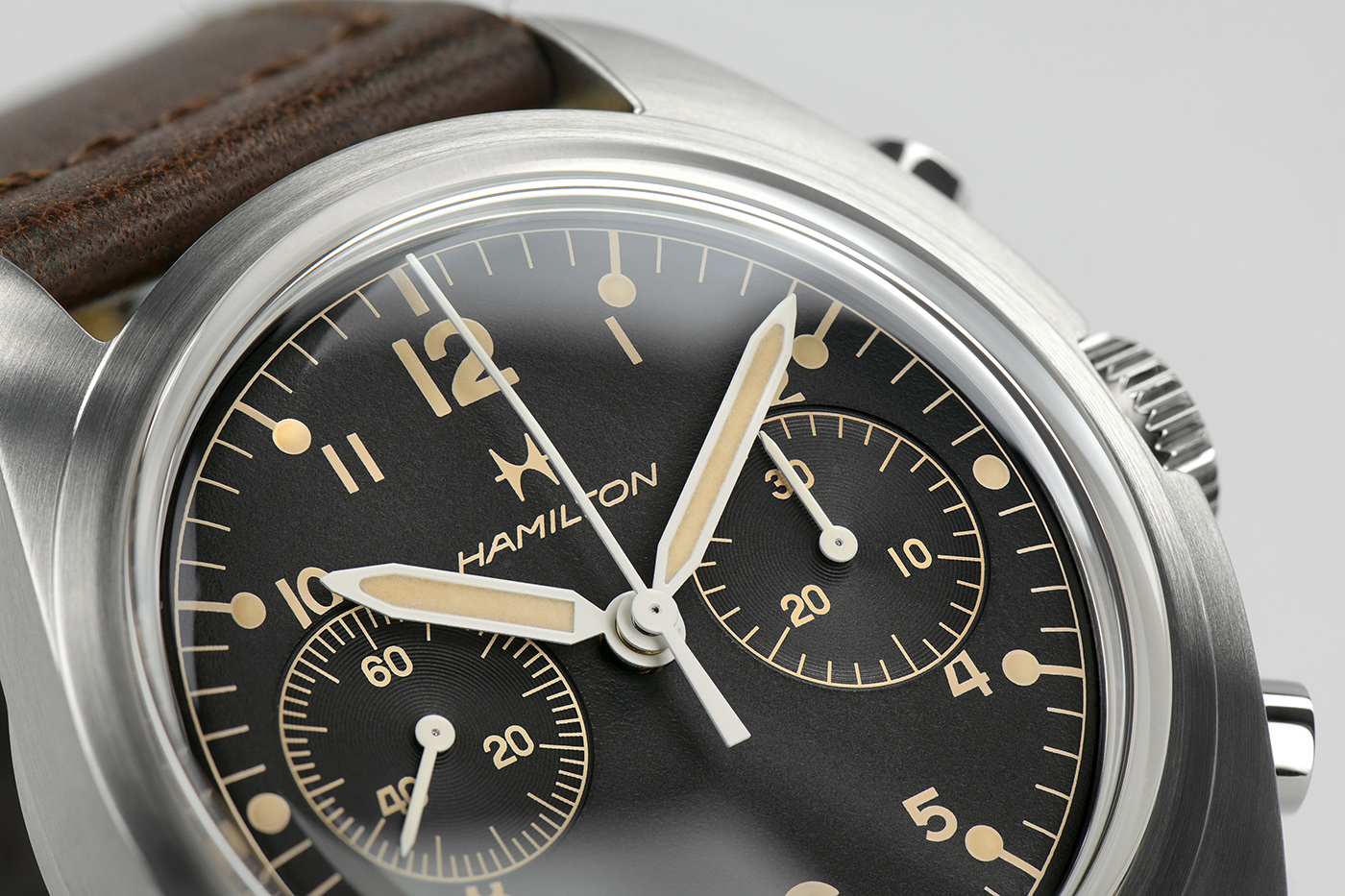 Unlike previous attempts to revive the “Fab Four,” the dial of the Hamilton Khaki Pilot Pioneer Mechanical Chronograph is an almost identical recreation of the ‘70s original. Other than the lack of a British Ministry of Defense broad arrow emblem at 6 o’clock and a “circle T” mark indicating tritium lume at 12 o’clock, this is an exact duplicate of the 6BB chronograph’s dial layout. The typeface of the printed Arabic numerals, the white lacquered handset, and even the ‘70s-style printed Hamilton logo are all carried over from the original, but the brand adds a layer of fauxtina warmth to this familiar design. Not only are the lume and dial text rendered in a rich uniform tan hue, but the dial surface itself is finished with an exaggerated grainy matte texture that offers a range of minuscule highlights and shadows for a subtle suggestion of tropical aging in images. Hamilton’s use of azurage for the two subdials helps to cut through this texture while lending some visual depth to the largely flat overall layout. 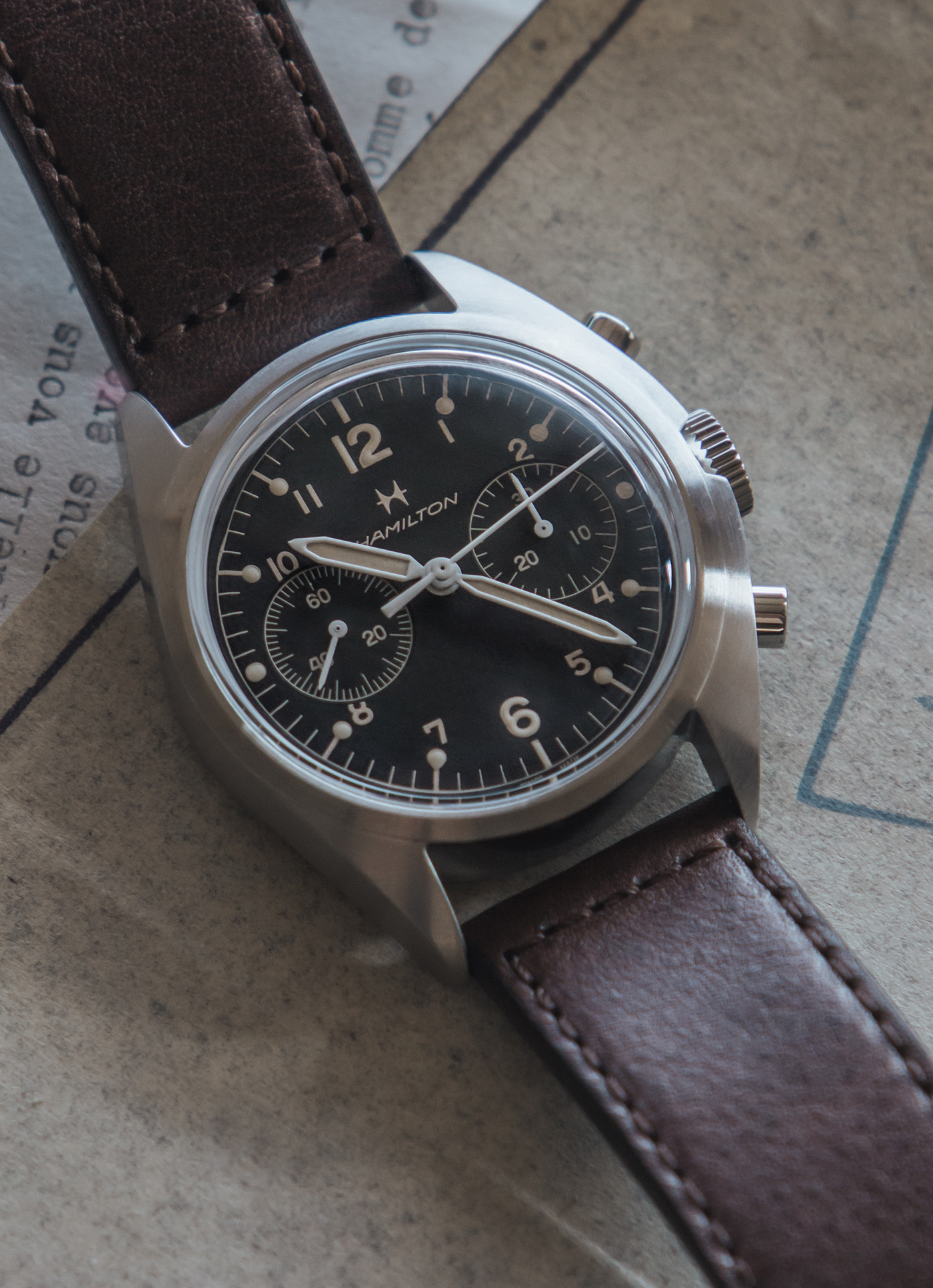 Hamilton powers the Khaki Pilot Pioneer Mechanical Chronograph with the H-51-Si hand-wound chronograph movement. Based on the venerable ETA/Valjoux 7753 platform, the H-51-Si is a substantially modified and updated interpretation of the long-running movement line first launched in 2021. Equipped with a thoroughly modern silicon balance spring, the H-51-Si provides a reliable and robust 60-hour power reserve at a 28,800 bph beat rate. The H-51-Si’s lack of a date wheel also helps to keep the entire package visually clean and simple, without any notable disruptions to dial symmetry. Hamilton completes the package with a classic distressed leather strap in deep coffee brown, with tone-on-tone box stitching for a rugged broken-in feel in images. 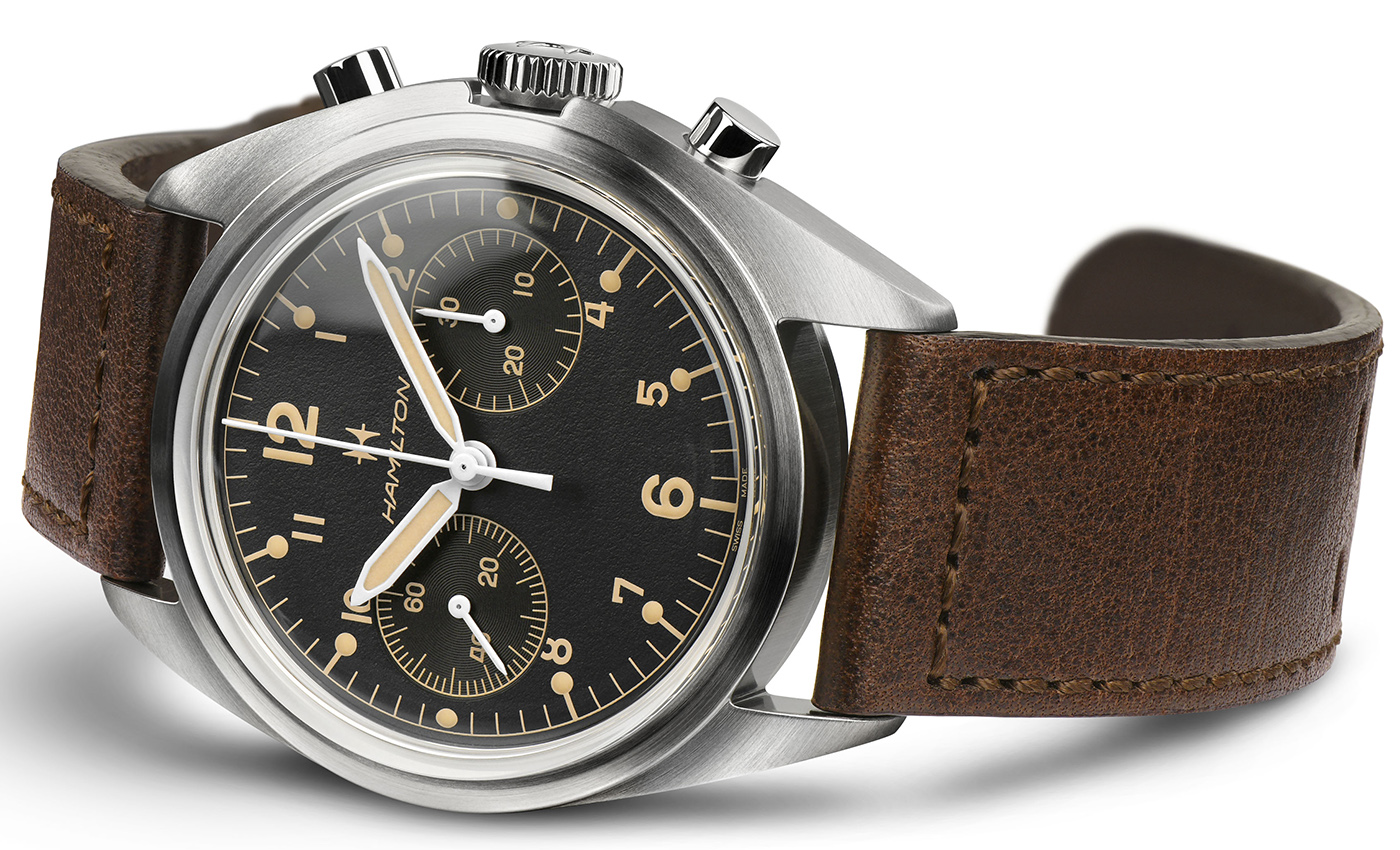