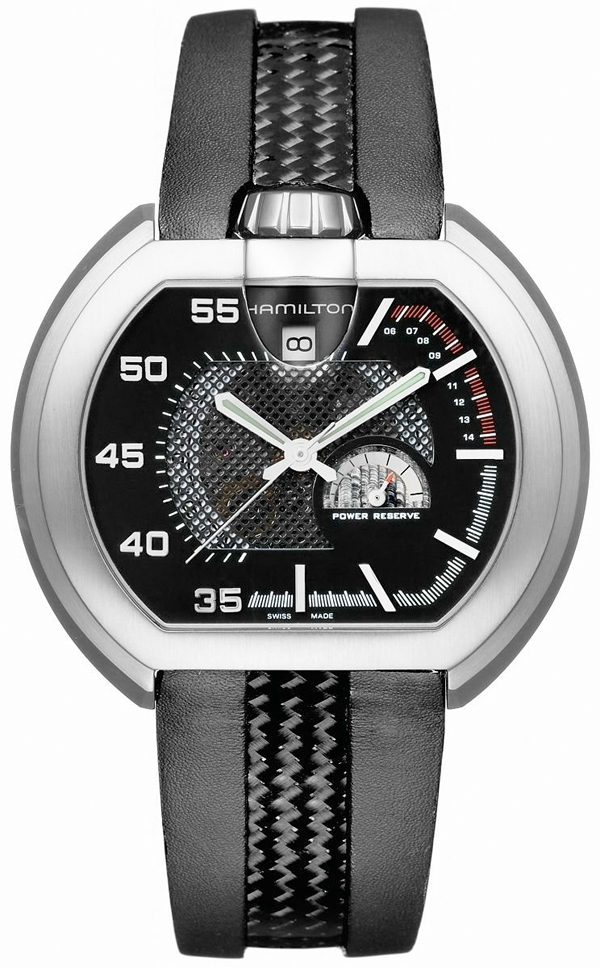 Hamilton is among the larger US based makers that actually makes watches you can be proud of owning. Hamilton is actually no longer US owned as it is part of the Swatch Group, but there is still a distinct American touch to each of their watches. This is as opposed to such American based watch makers as Timex and Fossil, who for the most part, don’t produce watches for people who like watches. Timex recently hired a new CEO who is trying to push them upmarket, so time will tell where they end up. So while Fossil and Timex are exalted brands at the moment, Hamilton has plenty to be proud of. Focusing mostly on military and aviation watches, Hamilton occasionally releases something completely different.

With a strap looking a lot like some from a German Junghans watch, with its carbon fiber inset, the Hamilton U.S. 66 is an interesting departure from most Hamilton, or any watch for that matter. The top mounted crown with bubbled crystal connecting the shape is very similar to that used on most Urwerk watches, while at the same time looking like a different orientation on a similar crystal shape on the Cartier Roadster. Hamilton is copying these designs in a friendly manner. Another area of inspiration for the U.S. 66 watch are motorcycle and performance car cabins, dashboards, and instrument panels. Indeed, a look at the face reveals what could easily be gauge off of a high performance vehicle. Hamilton trisects the face into three styles to intensify the look. Perhaps a bit much for the eyes, but the message is clear, and it will find many fans.

The name U.S. 66 most likely refers to famous Route 66. Having traveled on this route, I can say the two lane road, while very long, is not exactly apt for performance driving, it is the most famous of American roadways not heavily infested with traffic. Route 66 does promise miles of distance for your driving or riding pleasure. To monitor the power of the mainspring, just like a fuel indicator, the Hamilton U.S. 66 comes with a power reserve as part of its ETA 2897 automatic movement. The date indicator on the top under the crystal bubble in uniquely integrated on its side, yet still readable. This is one instance where something is turned on its side and I don’t mind. The power reserve fits in well, and looks to be partially skeletonized, meaning you can see some gears or exposed pieces of the movement underneath. Further, the movement is visible through the rear of the watch under another sapphire crystal.

One of most interesting elements of the Hamilton U.S. 66 Power Reserve is the watch case. An oblong oval mounted horizontally, rather than in the traditional vertical manner. I am very proud of Hamilton for doing this, because this represents the alignment that looks best while the watch is on a wrist. the horizontal position of the length of the case not only allows the watch case to be comfortably larger (it is a wide 50mm), but also visually extends the wrist, making the fit more appealing. This is an example of a watch that has been engineered to look attractive while worn, not just sitting in a case. For that reason, this is more than just a design concept watch.

Regardless, this particular edition is limited to just 2,008 pieces and with these looks I don’t imagine them to last very long. No word on pricing either, but expect something in $2,000 – $4,000 range. Hamilton says that a small seconds version of the watch will also be released. I imagine that the small seconds dial will be placed where the power reserve indicator is placed on the above pictured watch. Keep your eyes out for more interesting watches from Hamilton.