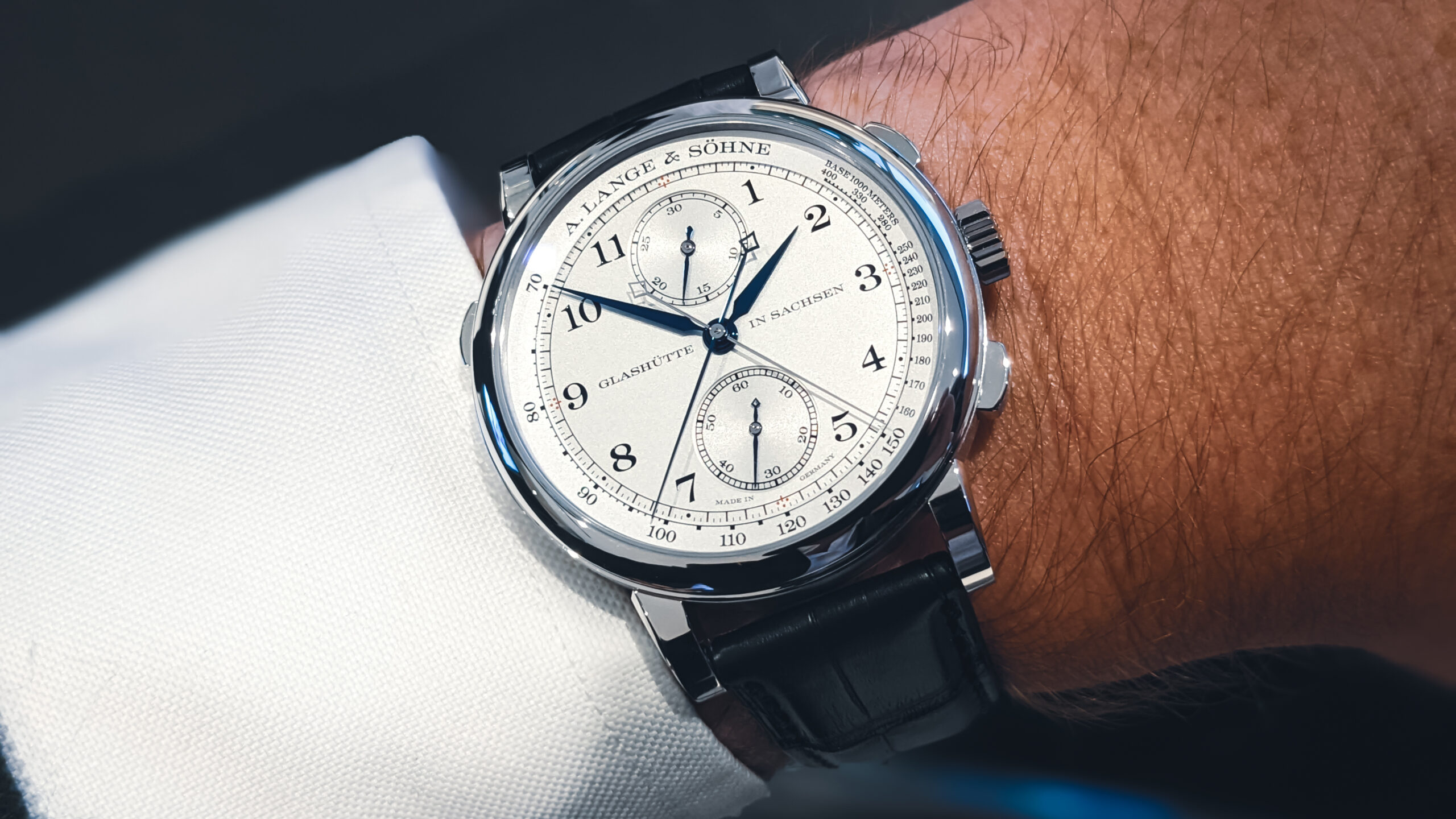 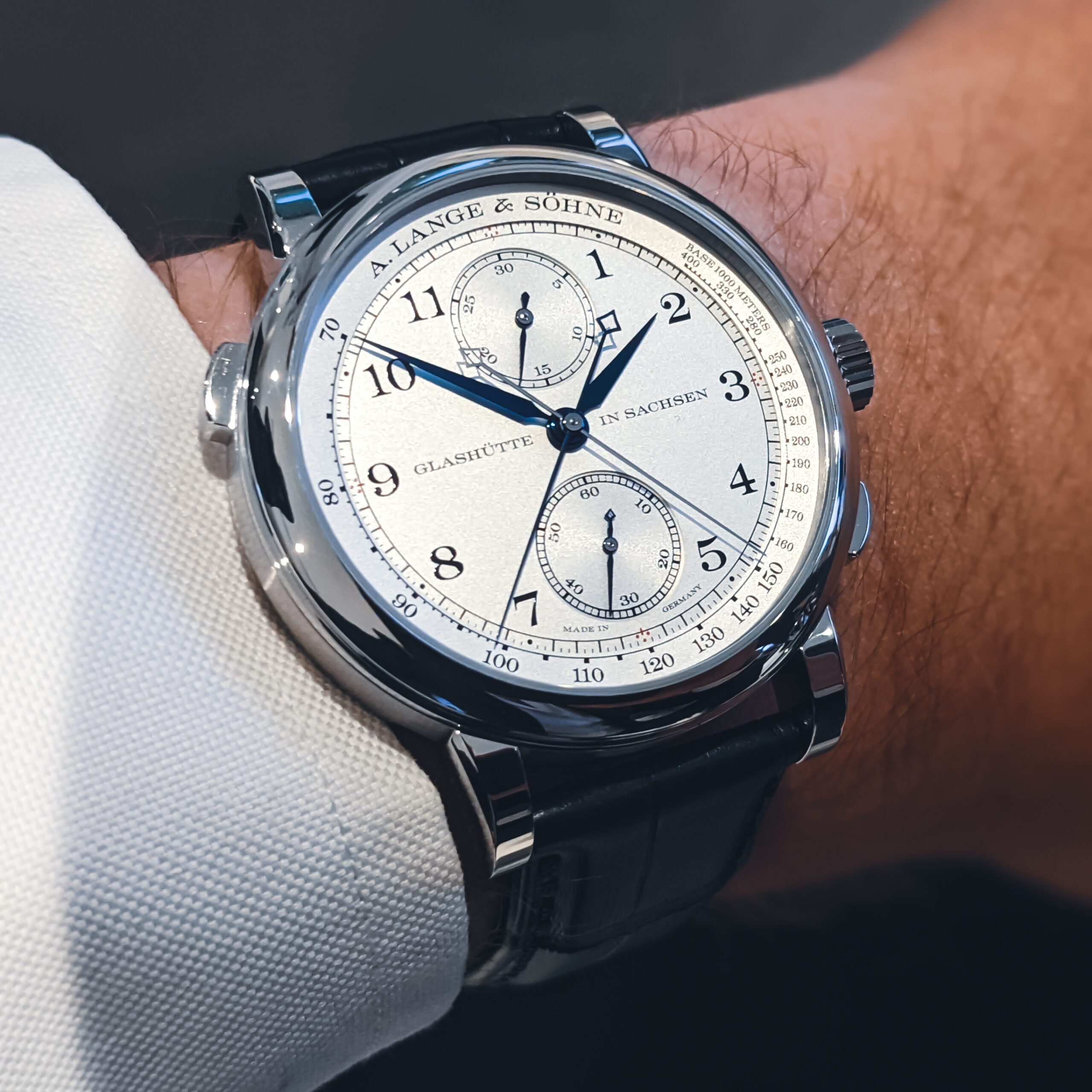 When it comes to beautifully finished watches that aren’t made in Switzerland, Glashütte-based A. Lange & Söhne is often the first name that comes to many people’s minds. Even its most humble models feature incredible degrees of finishing throughout their cases, dials, and movements, but many collectors would agree that it is the brand’s more complicated pieces where A. Lange & Söhne truly shines. The rattrapante (or split-seconds chronograph) is one of the heavy-hitter complications from watchmaking, and the German manufacturer’s first standalone rattrapante appeared back in 2020 as a limited edition of 100 pieces with a honey gold case and a black lacquer dial. Now, the A. Lange & Söhne 1815 Rattrapante is back with a solid platinum case and a silver dial with blue hands. While it might be easy to dismiss this new release as just a variation of an existing watch, the total impact of the changes results in a remarkably different timepiece than its black and gold predecessor. 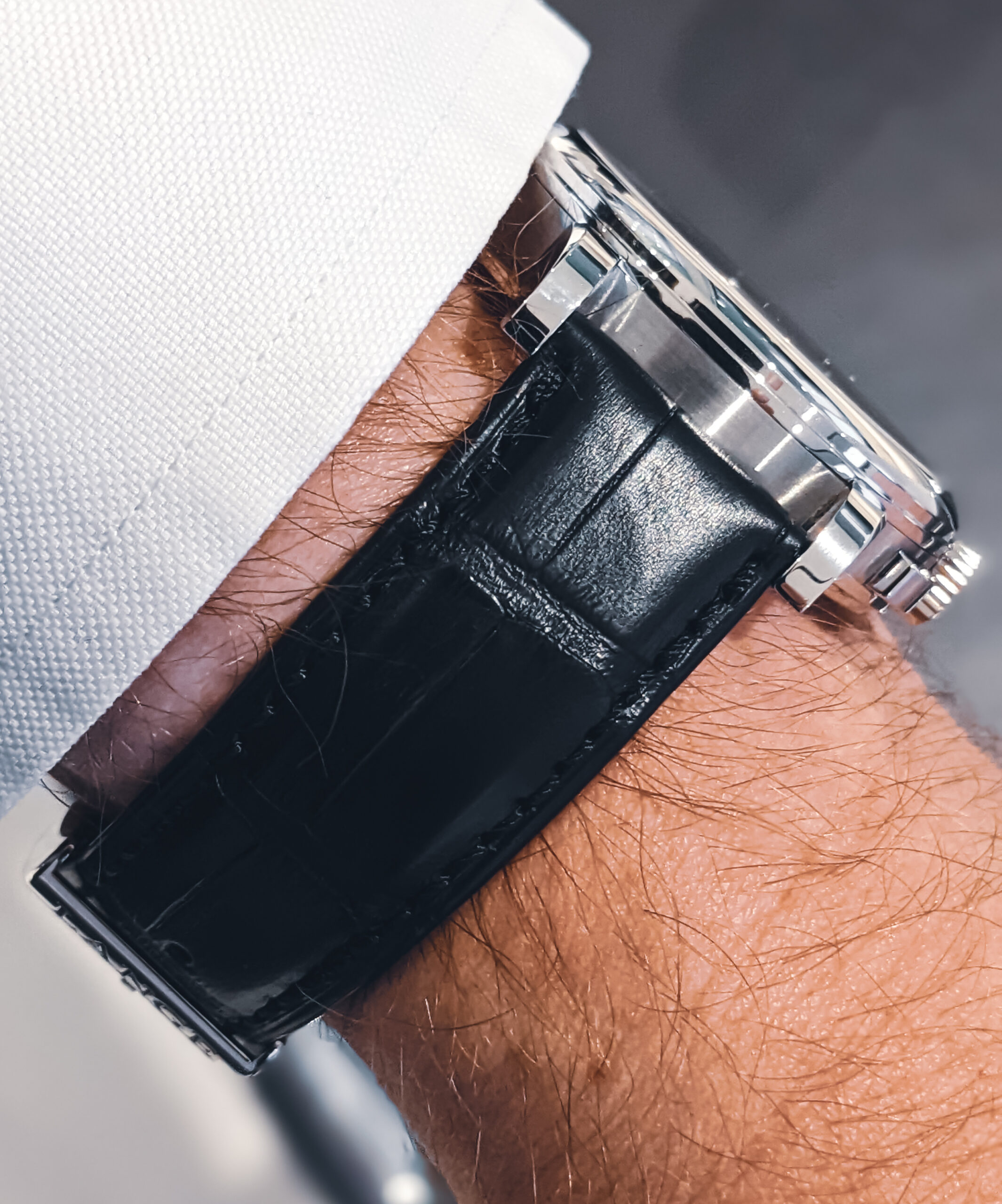 The case dimensions of the new platinum A. Lange & Söhne 1815 Rattrapante have not been altered at all, meaning that the watch still measures 41.2mm in diameter and 12.6mm-thick. Additionally, the overall design is unchanged, with thick lugs, a fluted winding crown, and a trio of rectangular pushers located at 2, 4, and 10 o’clock. Just like before, a pair of sapphire crystals protects both the dial and movement side of the watch, while a simple smooth bezel with a thin groove running around the perimeter of its base sits on top of the case. However, despite having the same case design as its Honey Gold sibling, the new A. Lange & Söhne 1815 Rattrapante offers a different overall experience on the wrist simply due to the fact that it is made from platinum. Given that platinum is heavier than even gold, the weight difference may be partially responsible for this, but the bright white color of the metal itself provides the platinum 1815 Rattrapante a more bold and modern overall appearance than the warm tones of its honey gold predecessor. 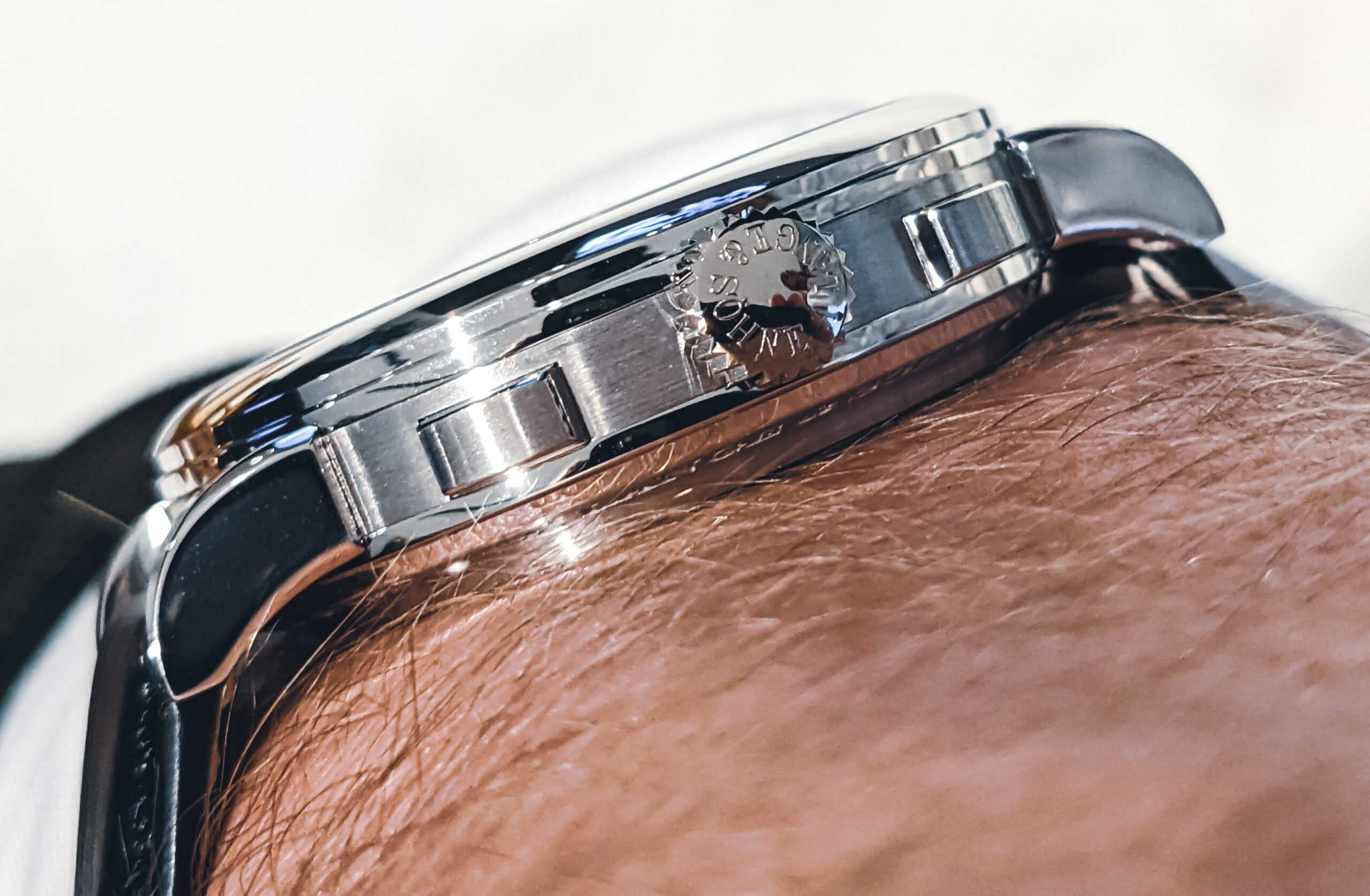 While its platinum case is undoubtedly partially responsible for why the new A. Lange & Söhne 1815 Rattrapante wears differently than the previous version, an equally important factor behind this is almost certainly due to the different dial and hands fitted to the new model. While the honey gold version from 2020 embraced an entirely black and gold overall appearance, the new platinum version features a crisp dial made from solid silver with black numerals and blued hands. Additionally, unlike the brand’s standard 1815 Chronograph models, which feature their two sub-dials in a horizontal layout positioned on the lower half of the dial, the A. Lange & Söhne 1815 Rattrapante watches feature registers running along the vertical axis and positioned at the 12 and 6 o’clock locations. Similar to how different case materials can create a different impact on the wrist, the silver dial and blued hands on the platinum 1815 Rattrapante result in a watch that feels quite a bit brighter and more contemporary, despite the fact that nothing about its design, layout, or even the small red accents at the poles of its minute track has changed from the previous model. 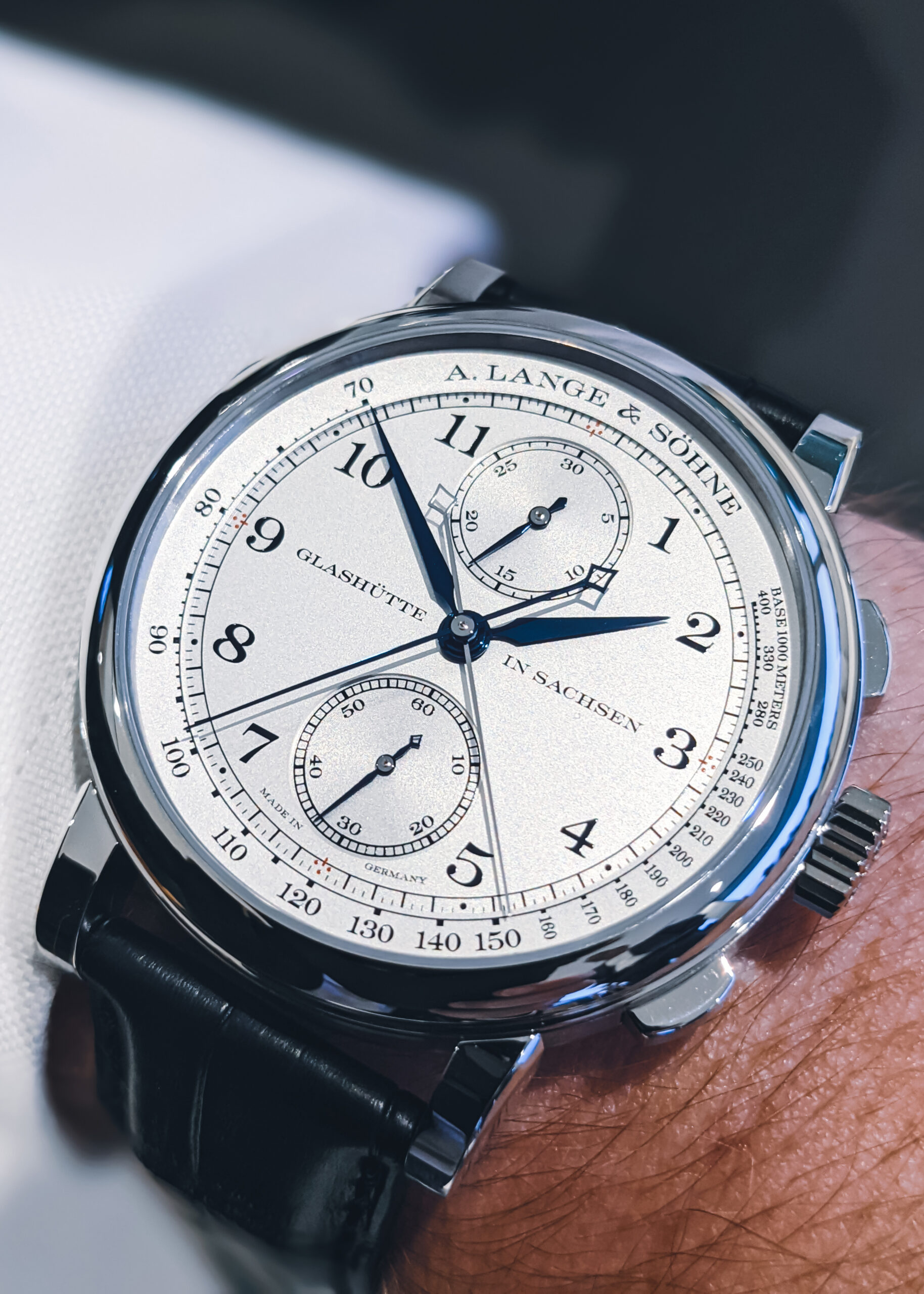 A. Lange & Söhne movements are especially beautiful creations, and the display casebacks of the more complex models offer views into tiny mechanical worlds consisting of hundreds of immaculately-finished little components. This certainly applies to the in-house Caliber L101.2, which is a manually-wound, twin column wheel-controlled split-seconds chronograph, consisting of 365 individual components and running at a frequency of 21,600vph with a 58-hour power reserve. Like other A. Lange & Söhne movements, the bridges of the Cal. L101.2 are crafted from untreated German silver and both the balance cock and chronograph bridge are adorned by hand engravings. While the previous honey gold edition was paired with a dark brown strap, the platinum version of the 1815 Rattrapante comes with a black alligator leather strap that is completed by a signed platinum pin buckle. 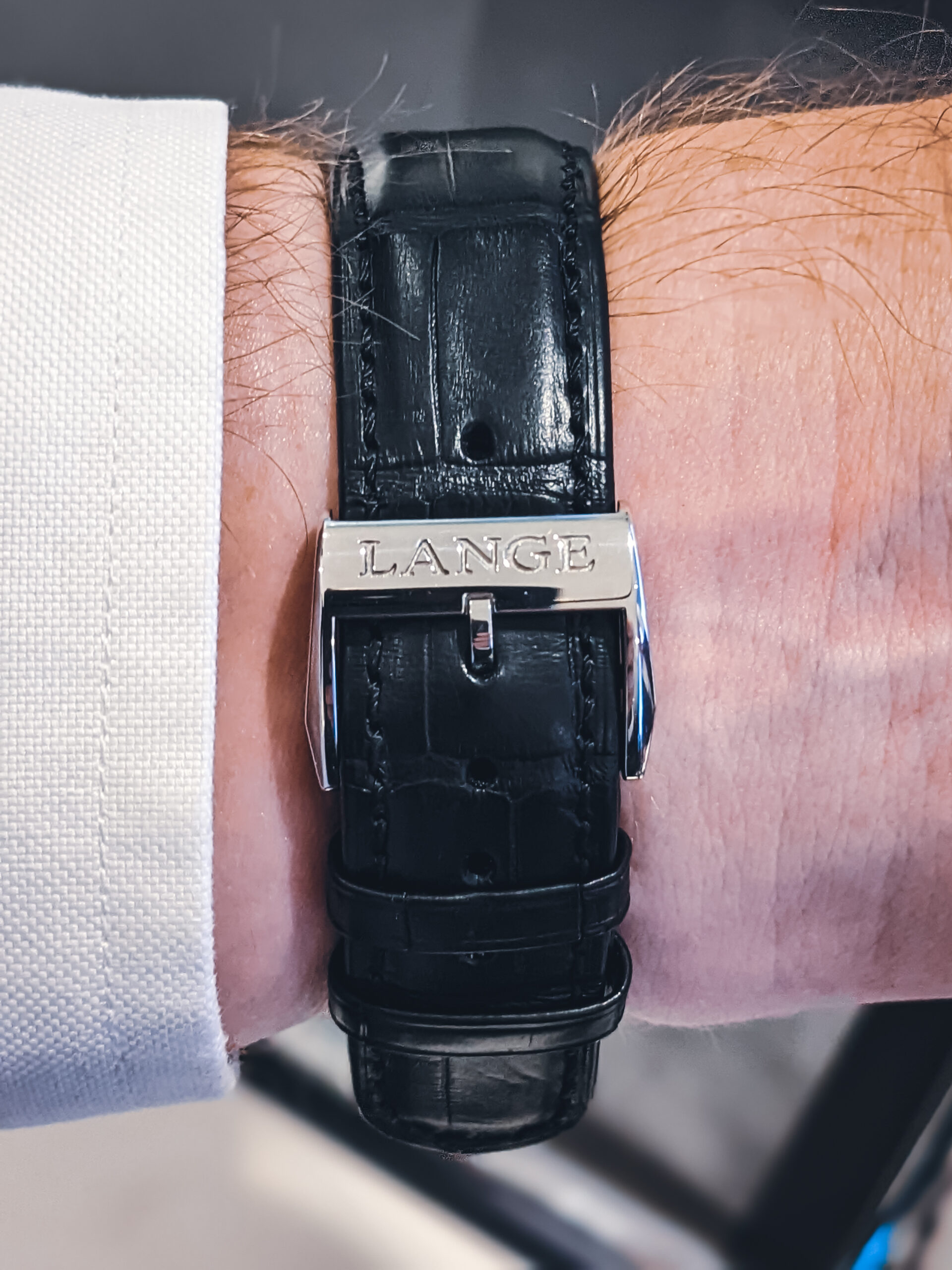 Just like the original honey gold version, the new platinum 1815 Rattrapante will be produced as a limited edition, although it will be slightly easier to find than its predecessor. While the previous version was a boutique exclusive that was limited to just 100 pieces, the new platinum model will simply be a limited edition of 200 examples. With that in mind, A. Lange & Söhne explicitly declined to make the retail price public for the 1815 Rattrapante in platinum, but it’s safe to assume that it will be more expensive than its Honey Gold sibling. Given that the previous edition was also accompanied by a six-figure price tag, the additional cost for platinum will likely be less of a factor for prospective buyers, who will probably be more relieved that this will not be a boutique exclusive edition and that there will be twice as many examples available. For more information, please visit the manufacturer’s website. 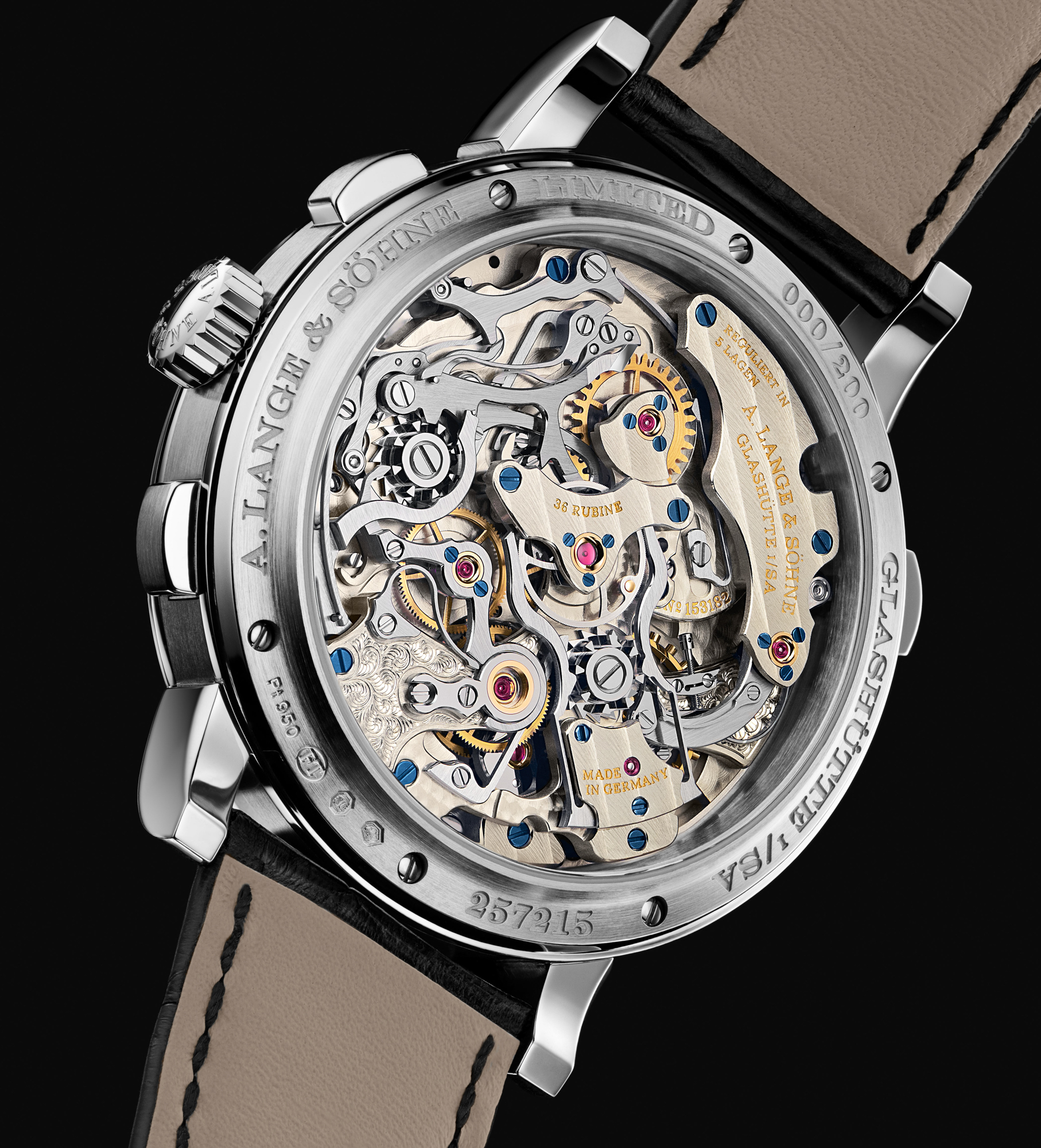