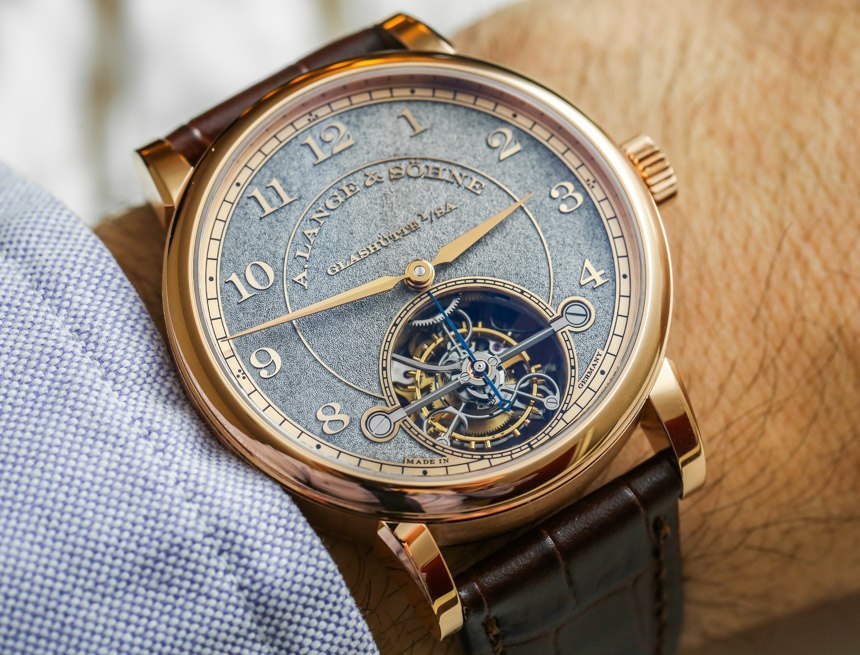 It was just a bit earlier today that we debuted the A. Lange & Söhne 1815 Tourbillon Handwerkskunst here, but as we have been spending the last few days in Dresden with A. Lange & Söhne to celebrate the 200th anniversary of company founder Ferdinand Adolph Lange’s birth, we were quick to go hands-on with this stunning new release. The A. Lange & Söhne 1815 Tourbillon Handwerkskunst is just the fifth Handwerkskunst – I just love the chime of that word – watch ever released by Lange. That word is for “artisanship” in German, and while no other Lange watch that lacks this special designation in its name is short of such an attribute, the Glashütte-based manufacture uses this term to differentiate its highly limited edition watches that showcase the absolute pinnacle in craftsmanship. While always mechanically complex, Lange’s Handwerkskunst watches do not differ that much – or at all – from their siblings in the high complication pieces from the brand’s main collections. As such, the 1815 Tourbillon that was released last year (hands-on here) has the same L102.1 in-house movement inside as this A. Lange & Söhne 1815 Tourbillon Handwerkskunst piece. Because it is a remarkable piece of engineering, let us first discuss the movement and then move onto the “kunst” part of it all, the dial. Lange claims to be treating all components in all of its watches equally in the sense that the quality of finishing for parts in its entry-level collection will be as good as it is on their ultra high-end pieces. Now, having had the privilege to handle watches from both ends of the Lange food chain, we can say that claim holds perfectly true – and gives us yet one more good reason to take a closer look at this manufacture caliber. What sets the L102.1 movement inside the A. Lange & Söhne 1815 Tourbillon Handwerkskunst apart from the googolplex of other tourbillons is the addition of two neat, albeit arguably “niche” features. With the 1815 Tourbillon last year, Lange debuted the first tourbillon movement that allowed for not only the stopping (or “hacking,” as it is also often called) of the tourbillon when the crown is pulled out, but also for the simultaneous resetting of the seconds hand to the zero position. Both functions were developed in an effort to create a tourbillon movement that allowed for a more convenient setting to a reference time, which in turn, allows for checking just how impressive the chronometric performance of the 1815 Tourbillon actually is. On a side note, while the last decade or so has seen most all luxury watch brands debut their own tourbillon watches – often advertising them as the next step in mechanical timekeeping accuracy – most all have failed to actually create a tourbillon movement that could be accurately set to a reference time source. And while, yes, we are talking about pushing the boundaries of what can and should be realistically done in a mechanical movement, Lange’s mechanical solutions have always been as elegant and refined as the deceivingly simple and solid aesthetics of their watches. In 1997, Lange developed the zero-reset function for the running seconds and, in 2008, the stop-seconds device for the tourbillon. Interestingly, the former sounds considerably more complicated to develop, and yet, it was the latter that came, well, some 11 years later. The way it works is that when the crown is pulled out into the time-setting position, a fine, curved piece of metal touches the balance wheel, “hacking it,” and stopping it from moving. This essentially stops the movement, while a reset hammer interferes with a heart-shaped cam on the seconds hand, resetting it in the same way as the indications are reset on just about every normal mechanical chronograph watch. In 2014, Lange paired these two functions in the 1815 Tourbillon, and again, a feature lifted from normal hacking mechanical movements and a reset function lifted from chronographs find their way into one of the most detailed and exquisitely crafted pieces A. Lange & Söhne has ever produced. Because, again, according to Lange, all movement components display the same level of refinement and quality, what sets the Handwerkskunst apart from other pieces is the unique finishing on some other components, such as the dials. For the A. Lange & Söhne 1815 Tourbillon Handwerkskunst, the main difference between it and the 2014 version of the 1815 Tourbillon is the dial. Made of black rhodium-plated pink gold, this highly legible dial plays in shades of grey, thanks to a decoration technique called “tremblage engraving.” The engraver uses a lining burin to crate a uniform, fine granular structure – a texture visually comparable to frost finishing, only more defined and displaying larger holes and dents in the dial. The pink gold and grey dial of the A. Lange & Söhne 1815 Tourbillon Handwerkskunst is so unique because it is uniform and irregular at the same time. Uniform in the sense that the texture of it looks dense and rich, and irregular because there are certain “zones” in the dial that your eyes can visually separate, giving away the fact that it was crafted by a human and not by super-accurate machines. The raised and high polished elements of the dial, as well as the large, beautifully legible hands (all in pink gold) contrast sharply against the elegant grey of the dial. Once the tremblage engraving is complete, the indices, the individual letters of the brand name, as well as the semi-circular arc are polished and then given what appears to be a subtle, albeit visible brushed finishing. The result is a dial that offers a smart and indeed stunningly beautiful play on proportions, textures and colors. A large cut-out between 4 and 8 o’clock on the dial reveals the 1-minute tourbillon and its polished upper bridge. Interestingly, the key components of the zero-reset and hacking mechanisms are visible – though the latter only shows up when it is in use. Given that both of these features were developed to allow for a more accurate setting and reading of the time, it is good to see that a second track runs around the periphery of this aperture, with an accurately sized and legible sub-seconds hand in blued steel indicating the running seconds. Ready to be released early next year as part of a 30-piece limited run in a 39.5-millimeter-wide pink gold case, the fifth ever Handwerkskunst piece from A. Lange & Söhne is a terrific continuation to what hopefully will be an expansive series of exquisitely crafted watches. Price for one of the 30 A. Lange & Söhne 1815 Tourbillon Handwerkskunst watches is $181,000. alange-soehne.com