Hands-On: A. Lange & Söhne Odysseus In Titanium May Just Be The Ultimate In Its Segment 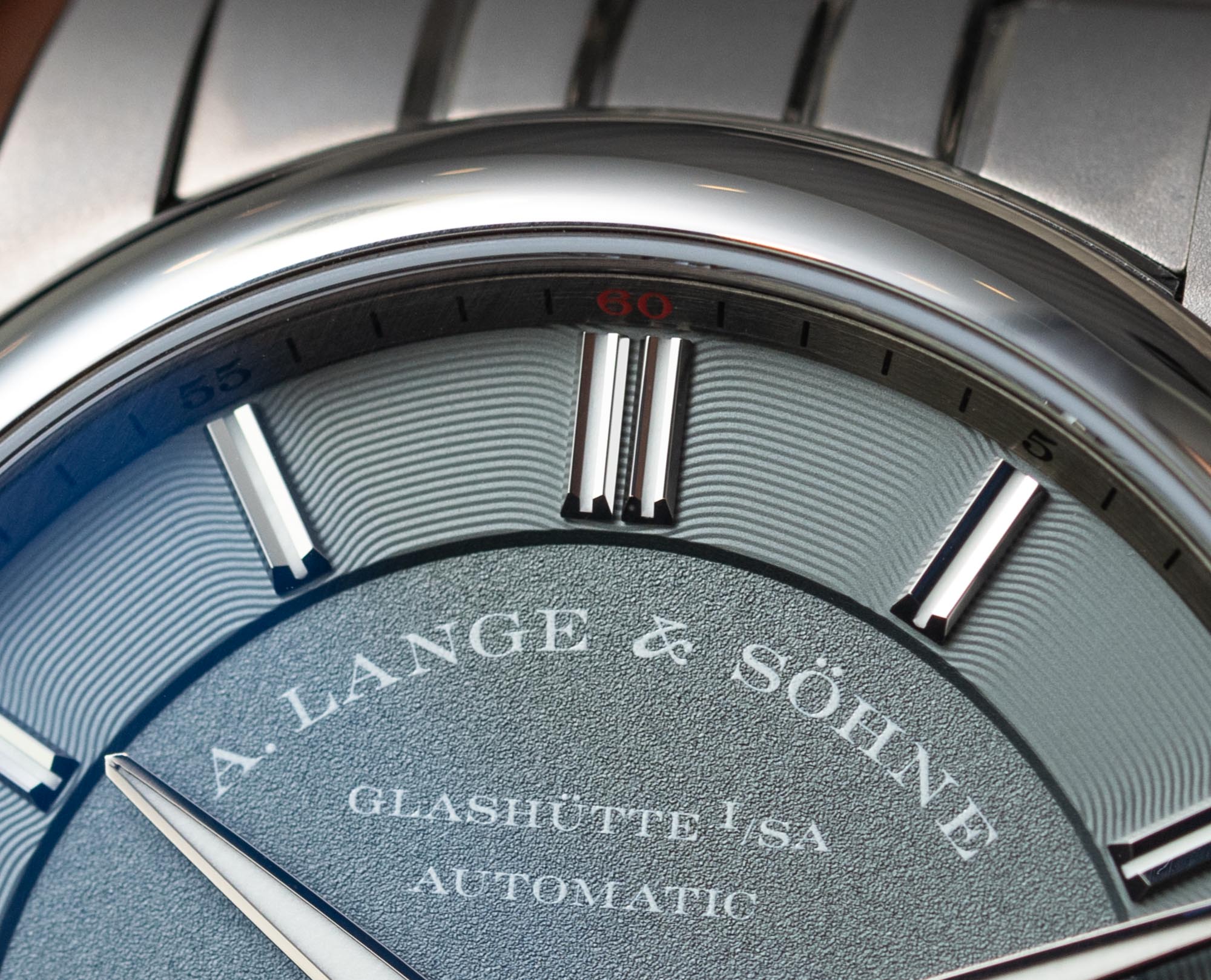 As a watch enthusiast, I like it — no, I love it — when big brands with big egos and pride in what they had been doing thus far do something new, or at least new for them. The A. Lange & Söhne Odysseus in titanium is the first time ever the brand hsd produced something in this titan of metals, actually named after the titans in Greek mythology. Thus far, it’s exclusively been precious metal and perhaps an oddball steel watch just to make snobs’ heads explode. But the Odysseus Titanium is the first proper deviation from 18k gold and platinum and, in line with what I just said, I love it for that. 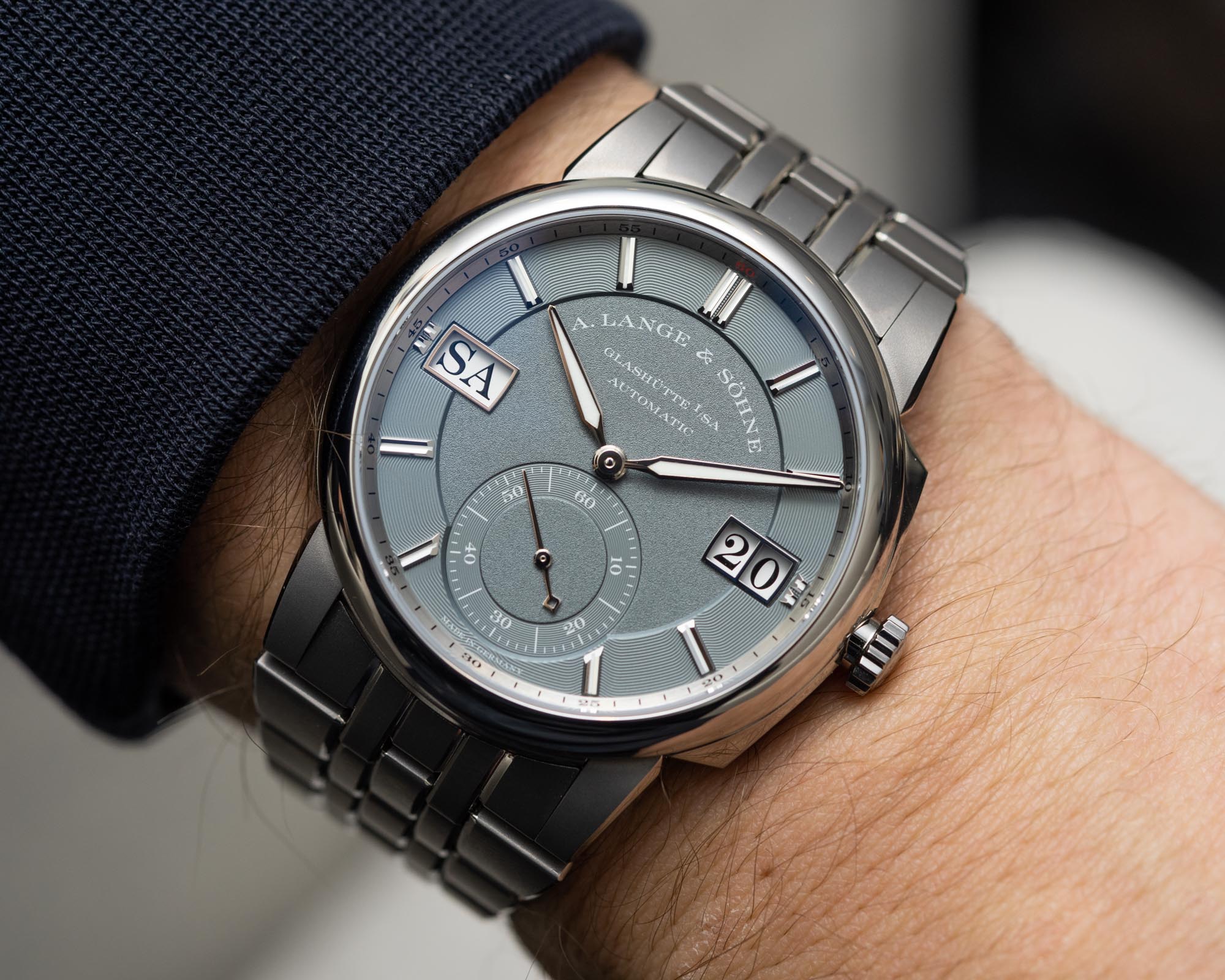 Every time we go to these major trade shows like Watches & Wonders 2022, there are bound to be a few high-end watches to induce a powerful “if only!” sensation. In this case, inside the A. Lange & Söhne booth and, specifically, inside my head that sounded like, “If only I had $56,500!” Now, I know these watches are preposterously expensive, but the best ones do have the power to make one forget all financial sanity and genuinely think, for a moment, that about four ounces of titanium, brass, and German silver is, in fact, the best place for that sum. The con? Well, it’s virtually unobtanium, limited to 250 individually numbered pieces — and that is a bitter pill to swallow even if one is spending one’s money elsewhere and not on $56k watches. 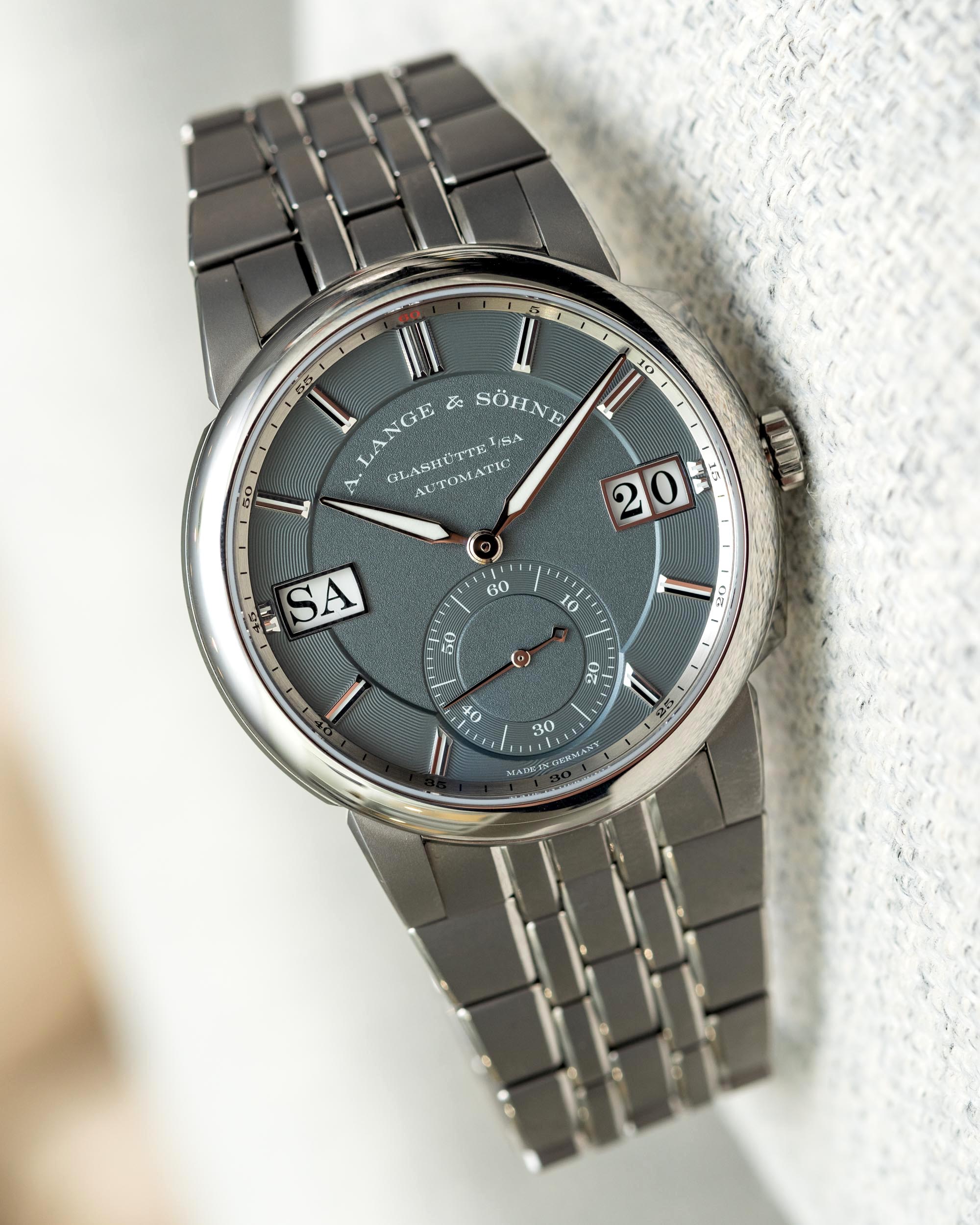 Okay, so the A. Lange & Söhne Odysseus in lightweight titanium — arguably the sportiest of metals in watchmaking, if there ever was such a thing. Does this major first (for the brand, at least) destroy A. Lange & Söhne’s reputation as a prudent producer of calculated and ageless wristwatches? Wristwatches they are so proud of, they assemble them not once, but twice before letting them out the door — it’s called the two-fold assembly, look it up if you want to learn more. I genuinely think it does not. What the heck, if they made one in ceramic tomorrow, I still would celebrate that and not find it a cause for concern. 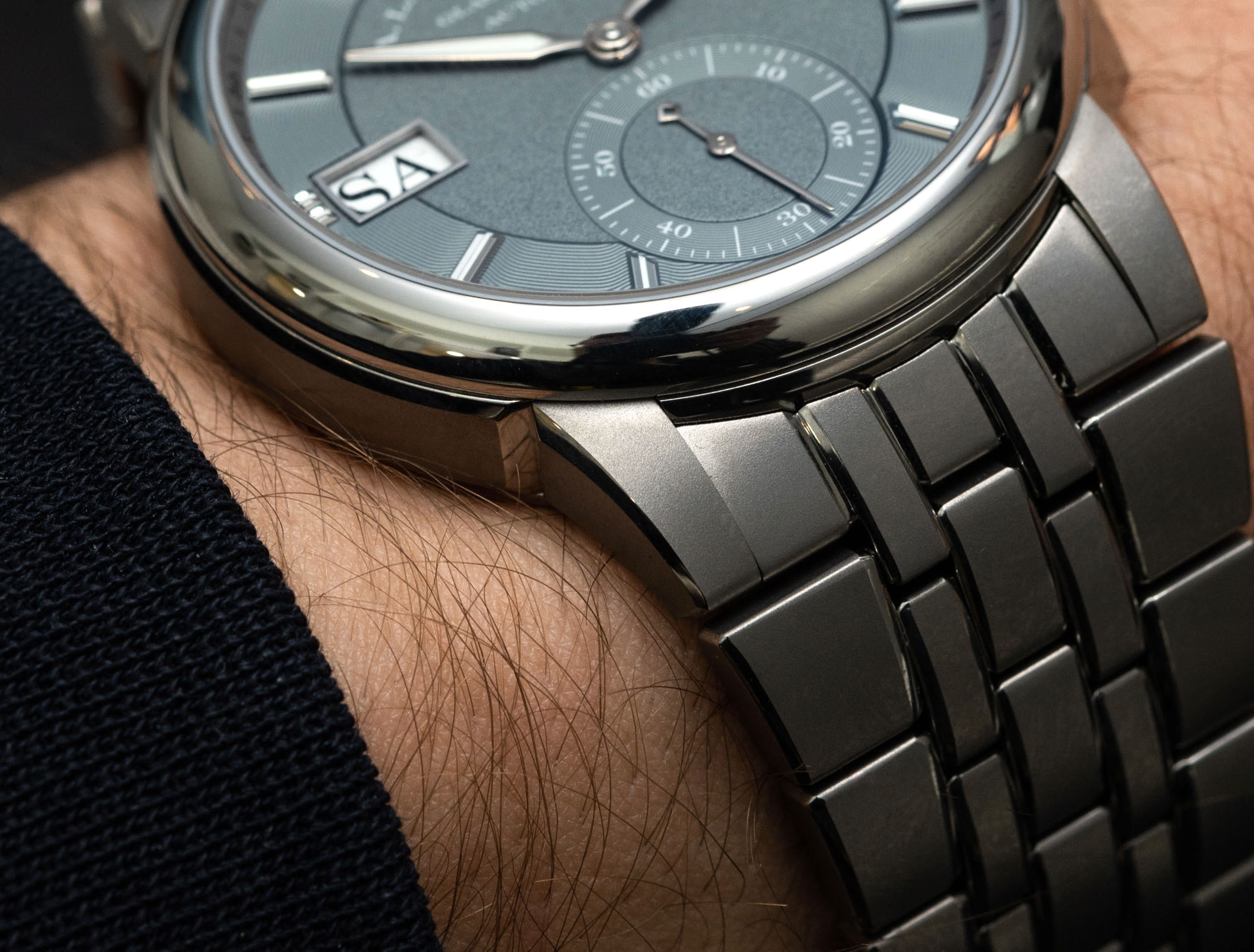 For the record, yes, there is validity to collecting or simply appreciating a brand for its consistency in certain fields — and to some, I presume, Lange’s exclusive preference for precious metals and dressy-ish watches might have been a big pull toward the brand. But that part of the brand still exists. You can still buy a two-hand Saxonia Thin for around 20 grand and think that you are better than anyone else who wears a Calatrava. But A. Lange & Söhne, despite its extremely impressive starting portfolio from the 24th of October, 1994 — that already included the optically virtually perfect Lange 1 — has to evolve. 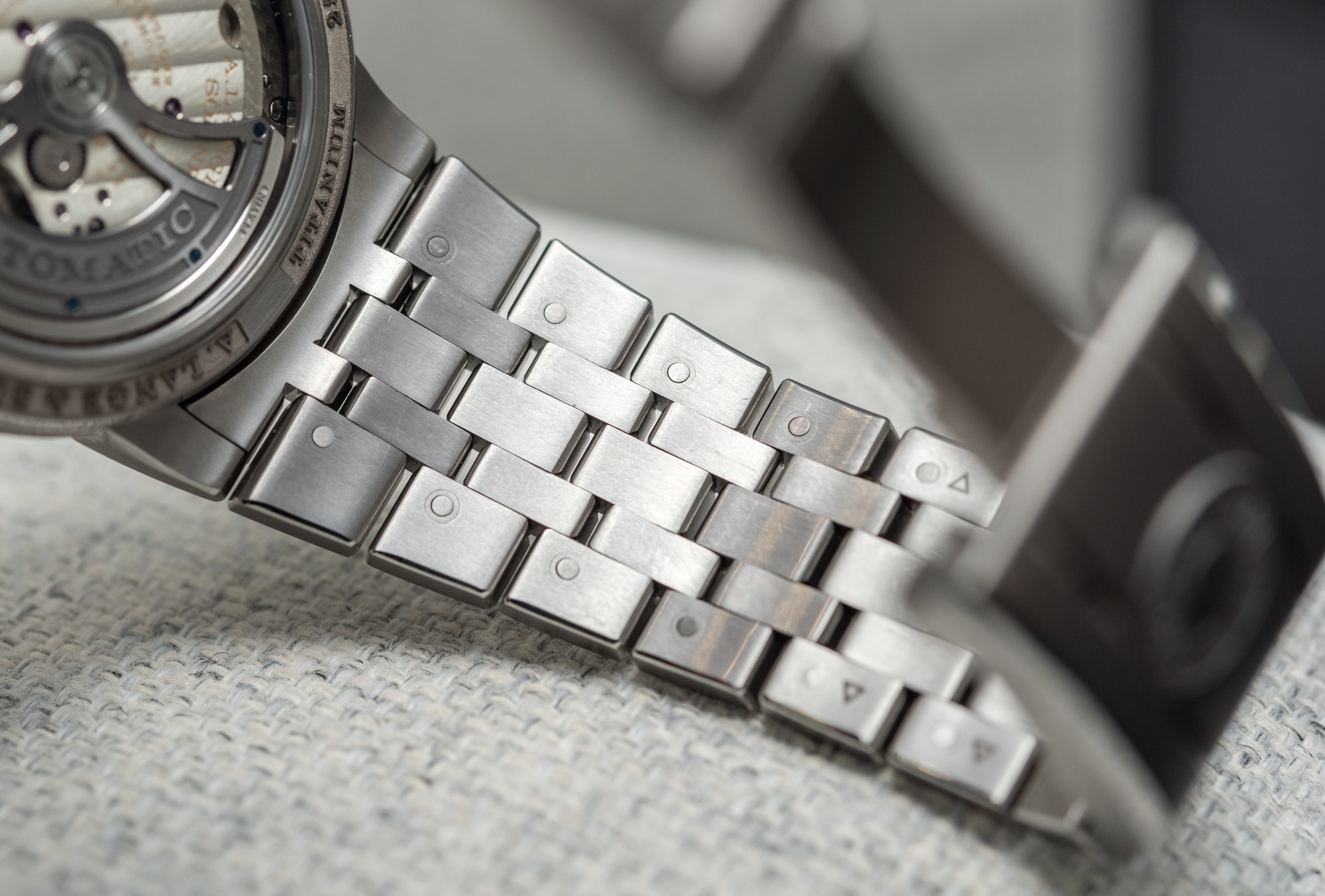 Come to think of it, the underlying and the true appeal of the A. Lange & Söhne Odysseus Titanium might just be the fact that it testifies to the brand’s ability to break its own self-imposed shackles and limitations which, in turn, implies the potential for a bright and creative future. Why that? Because when the highly detail-oriented folks direct their attention to something new, we know they will try and take it to the max. Case in point is the Odysseus Titanium. 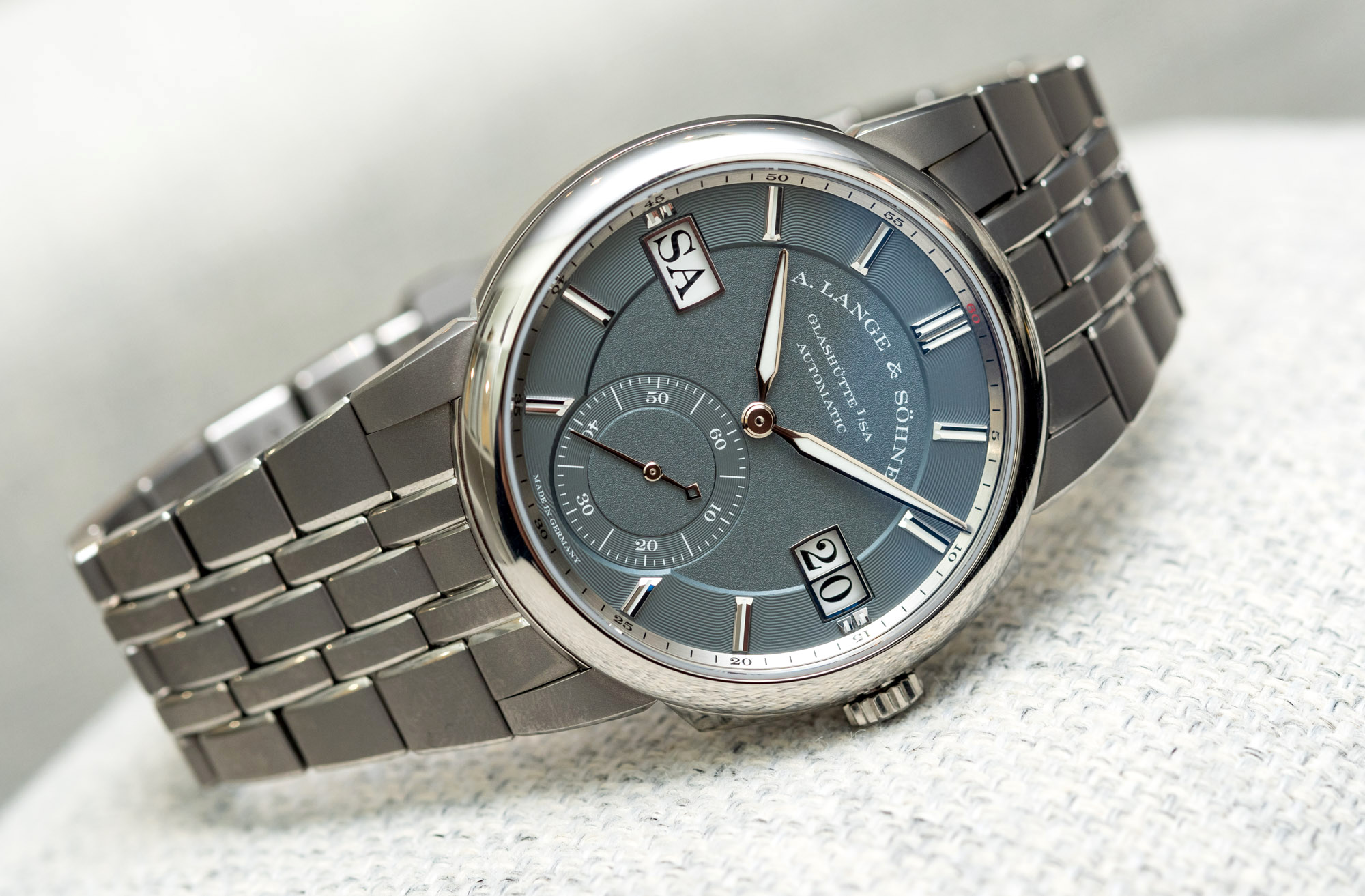 How so? Just look at it. It damn well might be the best titanium watch case and bracelet ever fabricated. It’s insanely good. It’s titanium taken to the max. And so why limit Lange’s abilities (and desires)? To please those who would prefer the brand did nothing new on this level but stuck to its “values?” Sure, good taste and measured decisions along the design and manufacturing processes must be exercised — the world doesn’t need a Hublot from Glashütte (side note: we have seen Hublot hit it far out of the park, too). 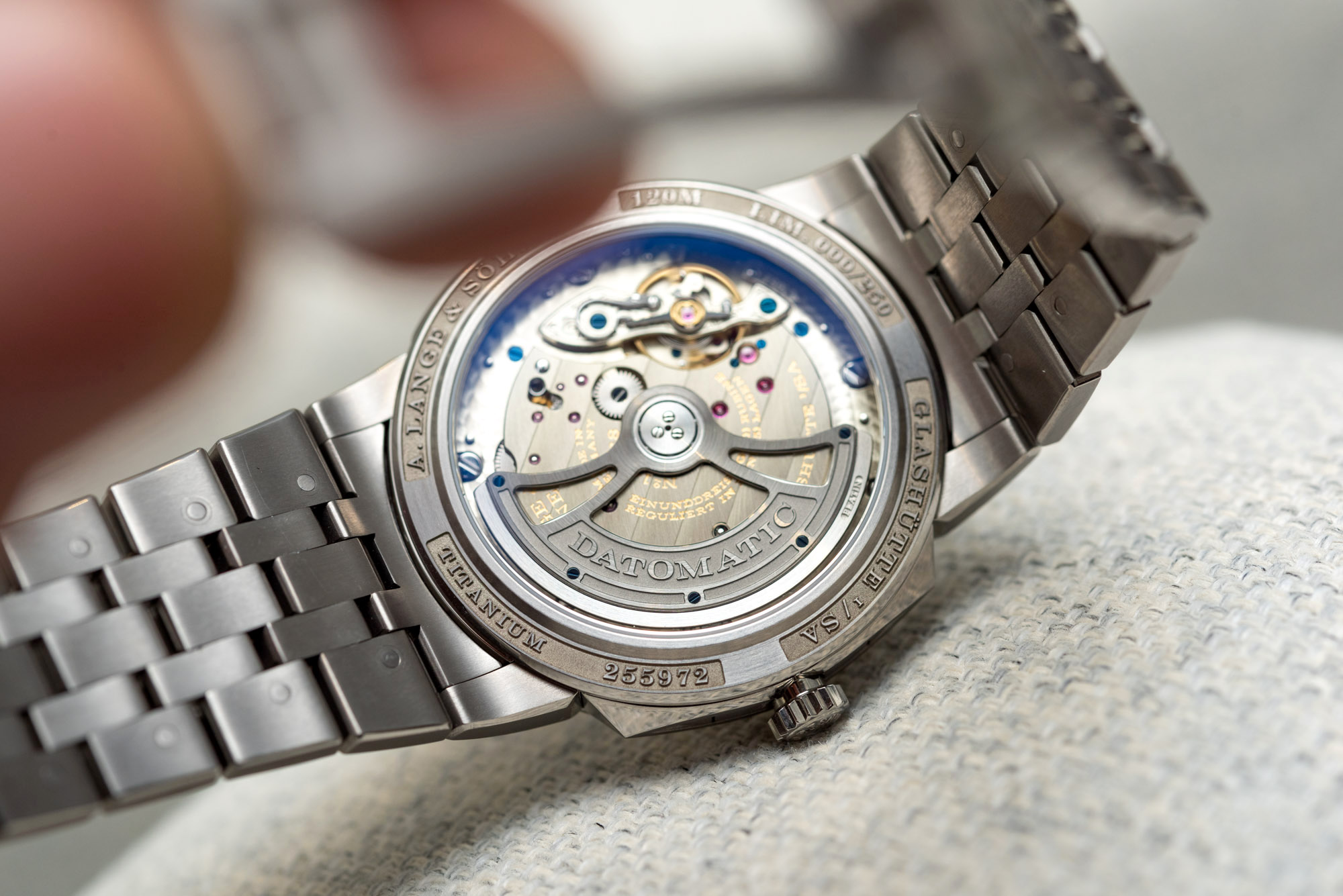 Picking up the A. Lange & Söhne Odysseus in titanium from its cushioned tray. I didn’t even look at it. I had to put it on, in haste. And once I did that, it carried a feel that roughly 5% of the watches I encounter do: that feeling that I could see myself wearing it daily. Call me picky, but I can’t see myself wearing 95% of the watches I see out there every day. They are either too safe and boring, are poorly made or designed, associate me with a brand I don’t want to be associated with, or some combination of these factors. I don’t think it’s an overstatement that about 5% of watches succeed at dodging all these traps. The 40.50mm-wide and 11.10mm-thick Odysseus in titanium is very light — about 105 grams, which is about two-thirds of the weight of the steel model. And that weight includes the titanium bracelet and the platinum oscillating weight (such a funny detail in a watch that’s supposed to be light, like a platinum steering wheel inside a Lotus). There is a fine-adjustment system inside the bracelet for added comfort. 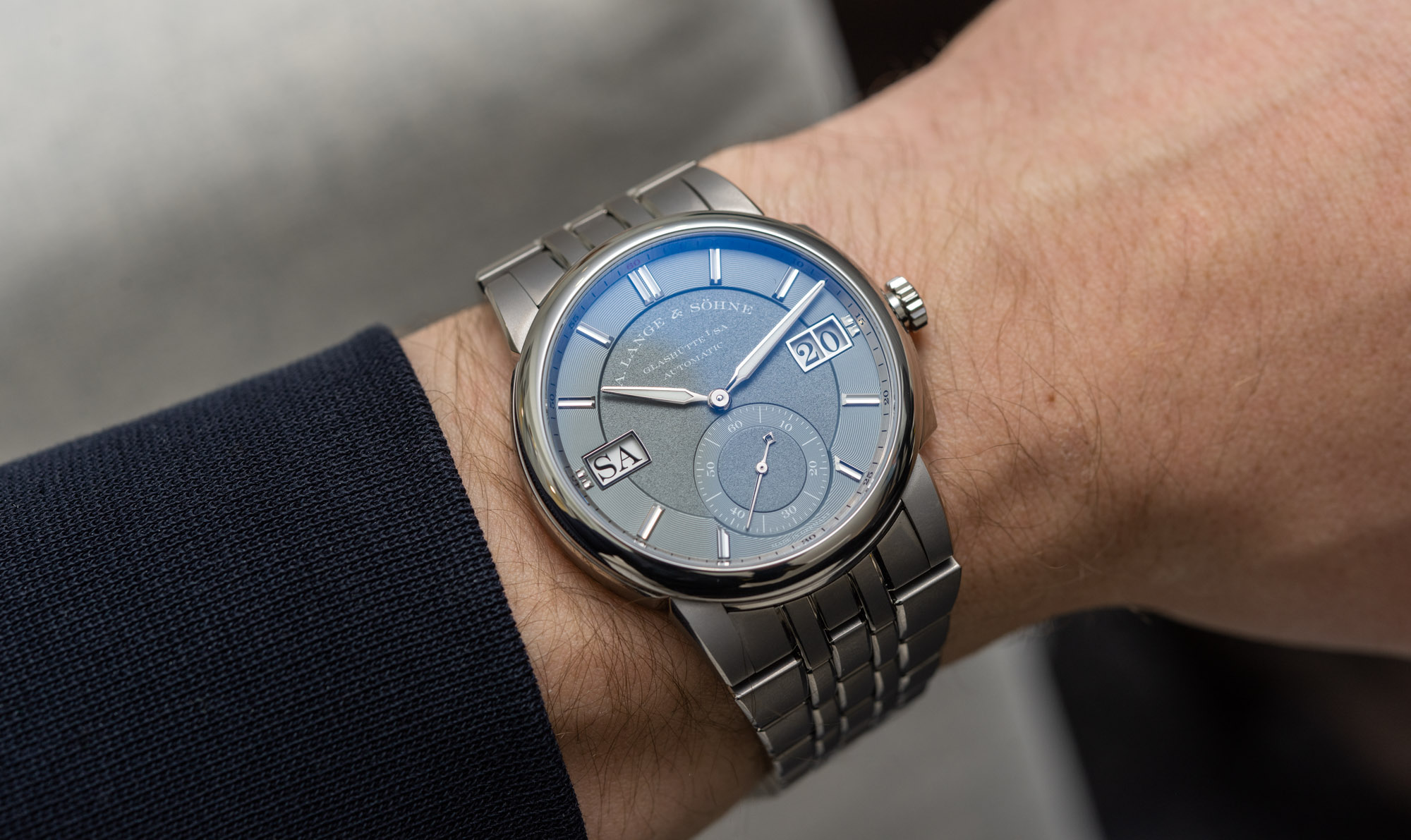 Wearing the ultimate in any watch is fun, and a privilege. A. Lange & Söhne may be late to the titanium party, but it has truly taken this metal to another level, and that’s true even if it comes at the cost of highly limited production. Perhaps the “ultimate-ultimate” engineering achievement would be to produce something that comes close to this not 250, but 25,000 times over. Or more. To get to this level, you’ll want to know that each link in the bracelet is individually beveled and polished on its edges and blasted for a remarkably even matte finish elsewhere before being assembled. Most bracelets, even high-end ones in precious metals, are finished once assembled. 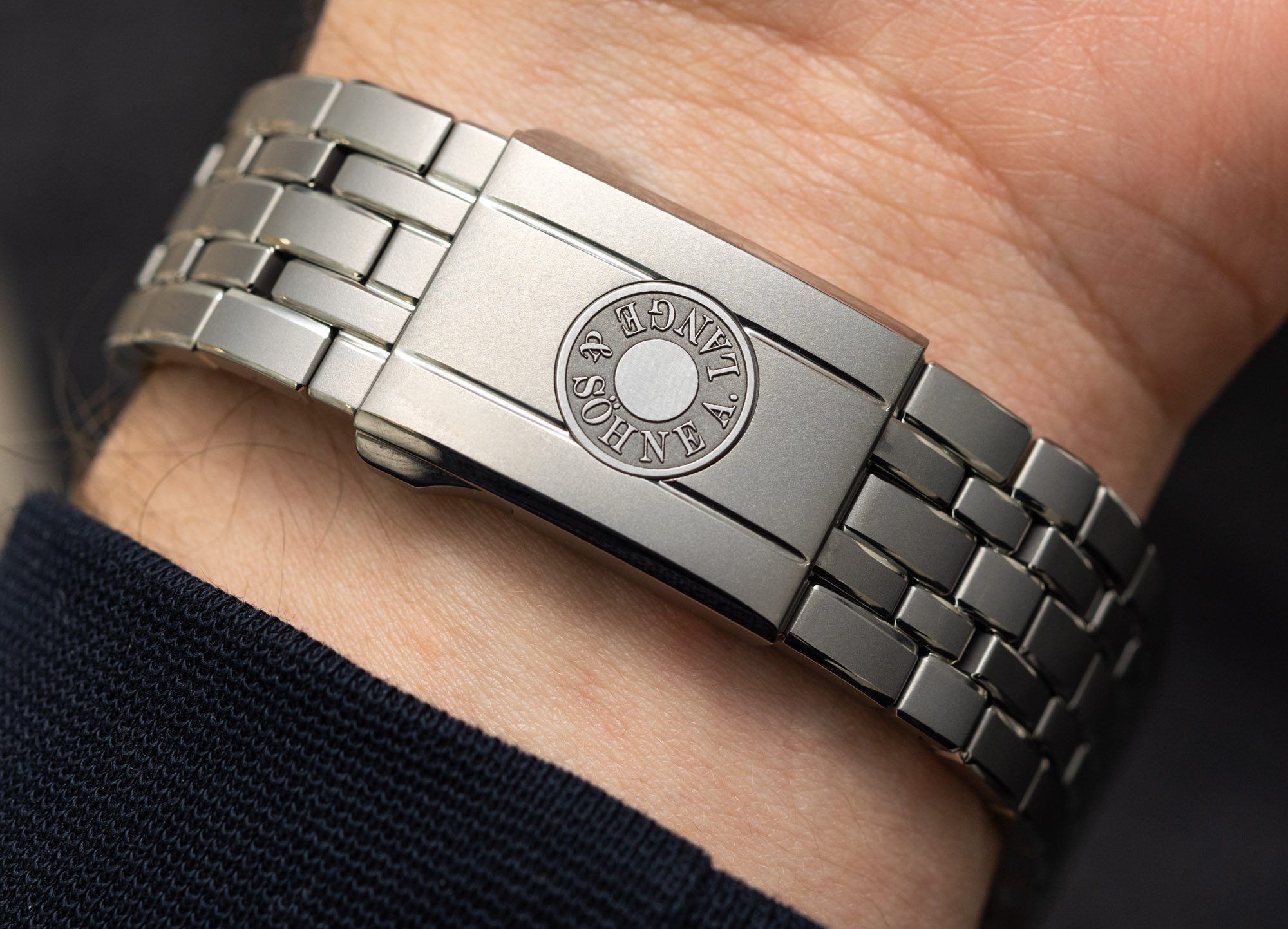 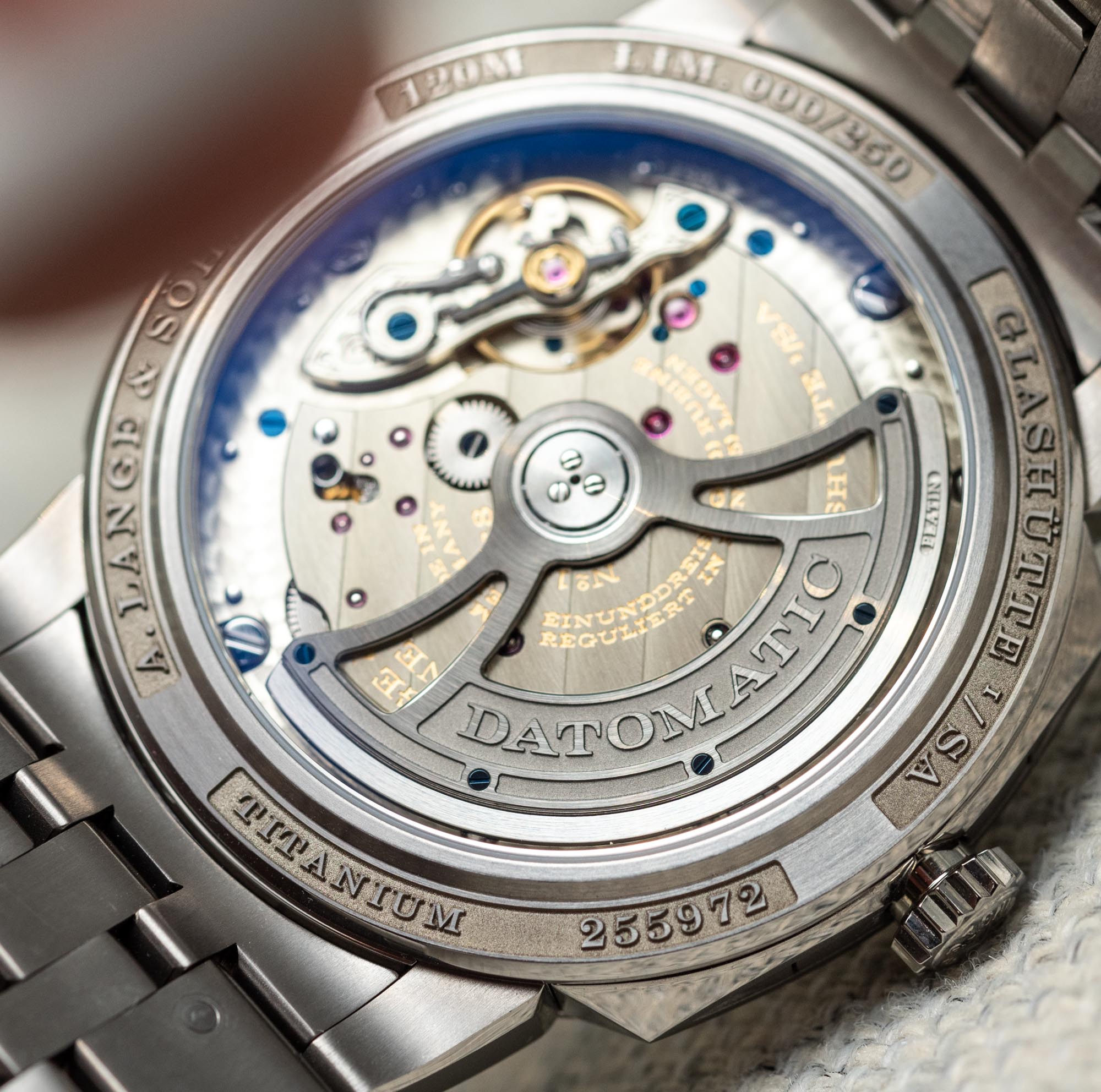 The movement remains unchanged from the previous two versions of the Odysseus — the debut model in steel and the follow-up in 18k white gold. It’s the only Lange watch that operates at a 4 Hertz frequency. A higher rate means the balance finds its way back into regular operation quicker after a shock, resulting in potentially better timekeeping performance over activewear. Now if only Lange could engineer out the unleveled discs in the date window if we are talking about chasing ultimates. Speaking of activewear, the Odysseus in titanium sports a healthy 120-meter water resistance rating, enough to have relative peace of mind when jumping off your yacht for a refreshing dive. It’s also good enough when compared to other high-end bracelet-equipped luxury watches like the Nautilus or the Royal Oak. 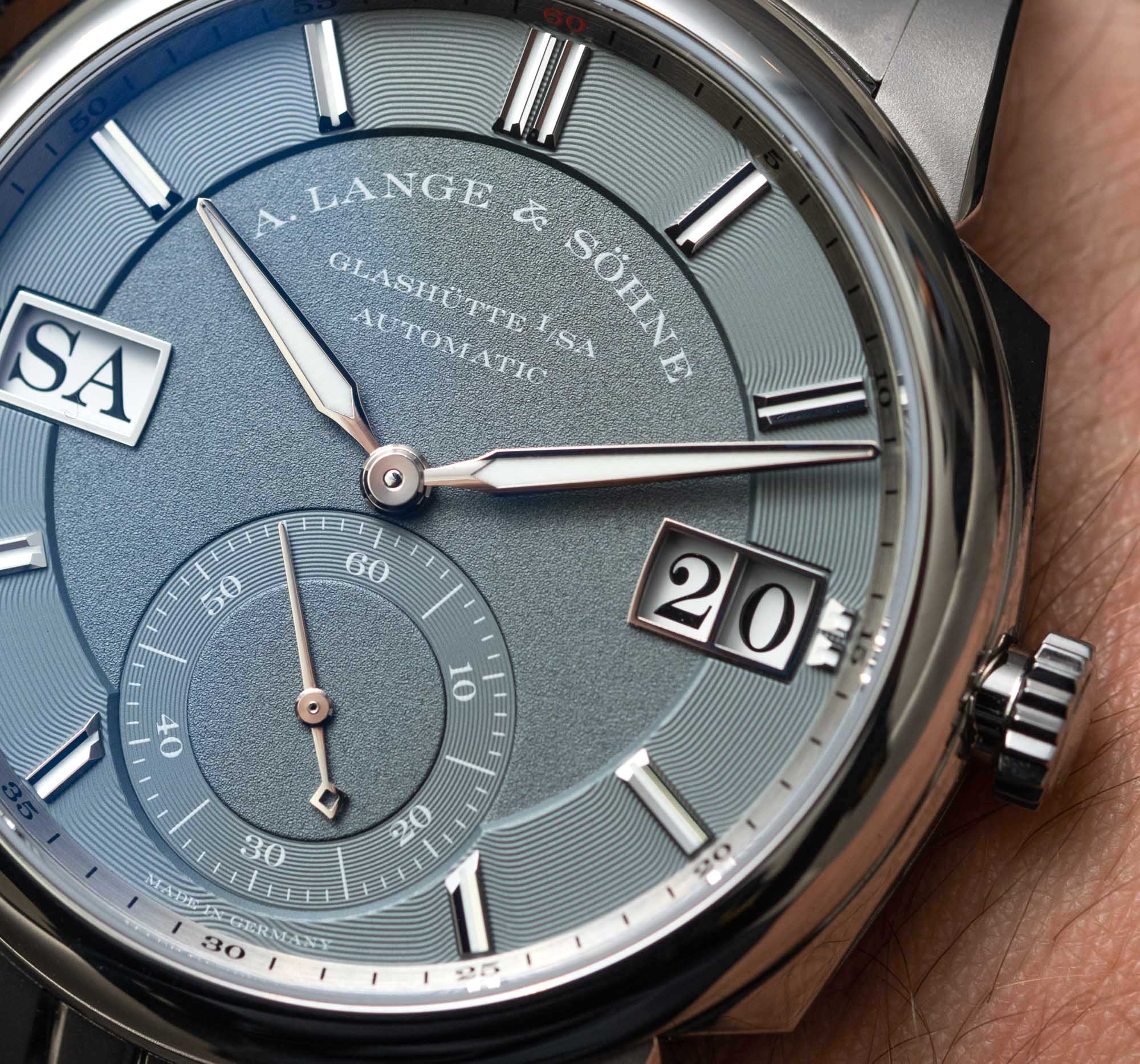 Beautifully crafted, surprising in a positive way — unless you are a hardcore old-school Lange fan — and the ultimate in titanium, that’s the new-for-2022 Lange Odysseus. Price for the A. Lange & Söhne Odysseus in titanium is $56,500 and it is limited to just 250 individually numbered pieces. This, in truth, makes the “regular,” 30,900-dollar Odysseus in steel an, ahem, value proposition. You can learn more at the brand’s website.