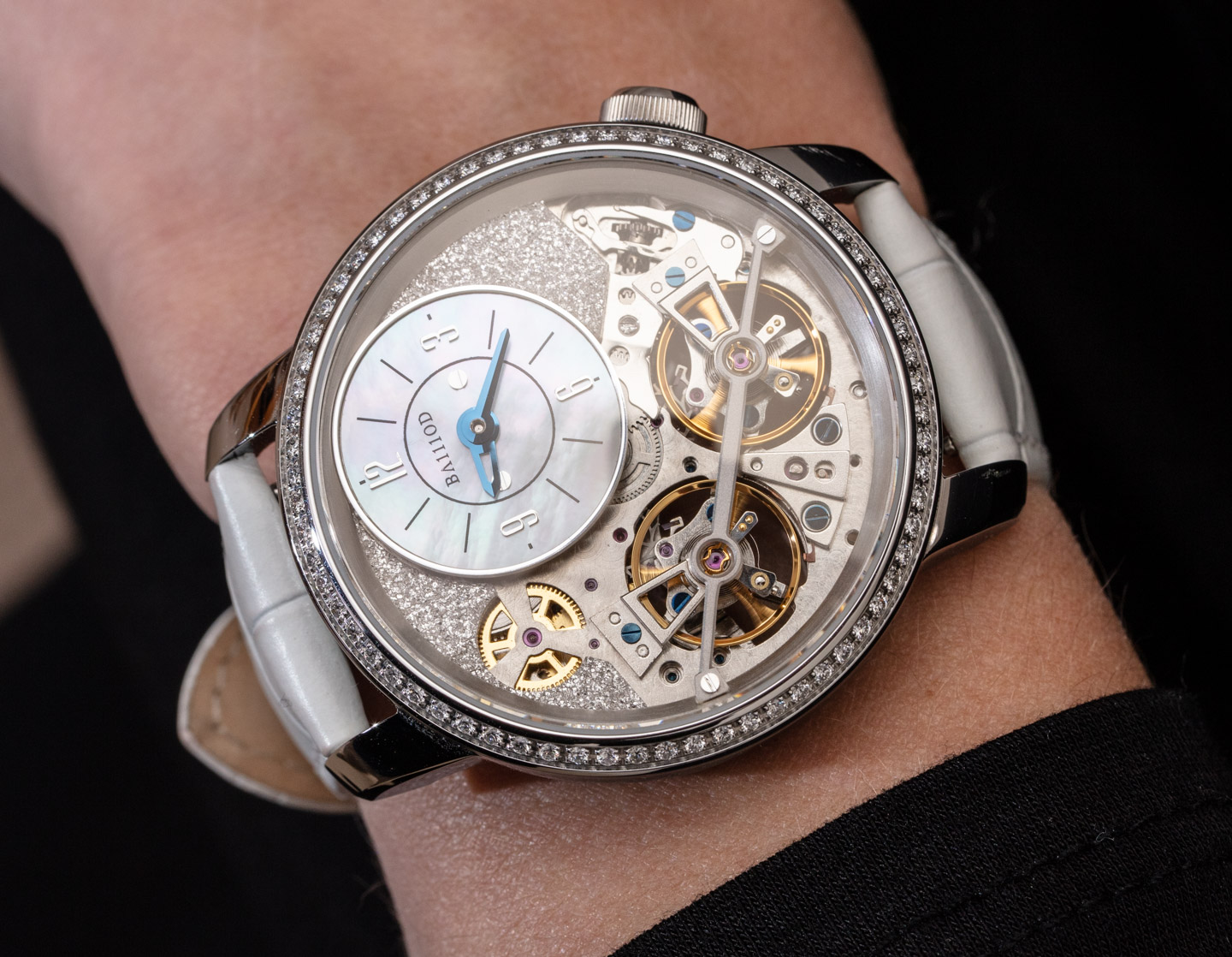 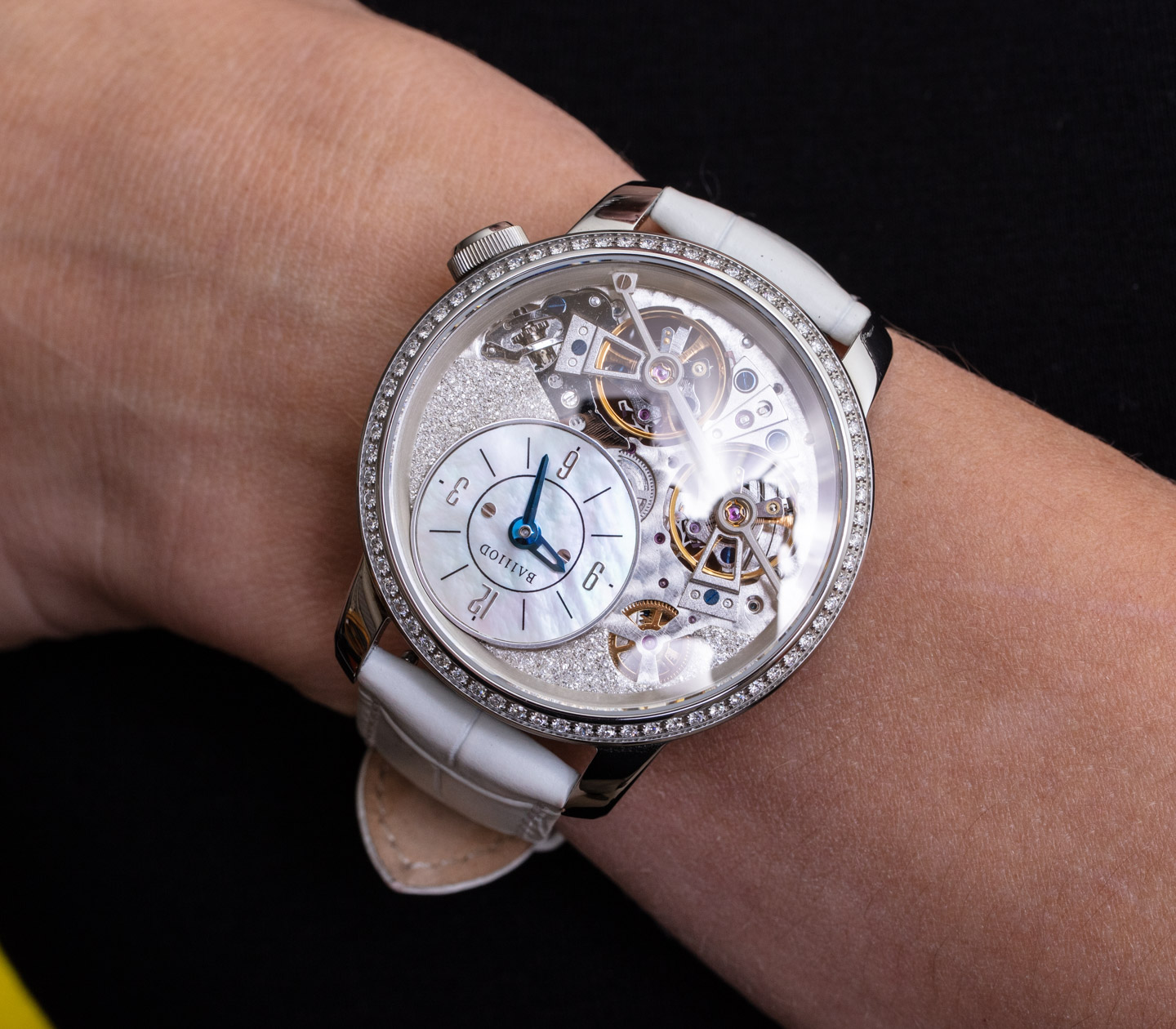 The BA111OD Chapter 2 Diamonds Collection is a beautiful product collection that takes an exciting timepiece design for men and now renders in a form that women can also enjoy. I will, however, be honest and report that I liked wearing the 42mm-wide BA111OD Chapter 2.1 watch myself. Yes, it has a mother-of-pearl dial, frosted movement surfaces, and diamonds set around the bezel. These are all things I happen to like in watches, but they are often paired with feminine designs. Replace the matte alligator-style leather strap with something a bit more masculine, and I think I’d rock this watch.

BA111OD is the new brand that also represents a new sales concept — one that will take some time for the timepiece buyer community to absorb. In fact, the BA111OD was developed by Swiss Thomas Baillod as a means of demonstrating that his novel community-based sales concept could work. There is still a lot of misunderstanding about BA111OD, but that is OK given that, in a lot of ways, the benefits of the brand are a bit ahead of their time. What irks some consumers is that you can’t just go to an online store and buy a BA111OD watch. Instead, you need to join an online community and request (or be granted) permission from a previous product owner in order to buy one. Practically speaking, no one would deny you the right to purchase the watch, so there isn’t a risk of feeling that “your money isn’t good here,” but it does take a few extra (honestly painless) steps to buy a watch. I’m sort of convinced it’s worth it — and this applies to the buying experience for any of the BA111OD current and future products. 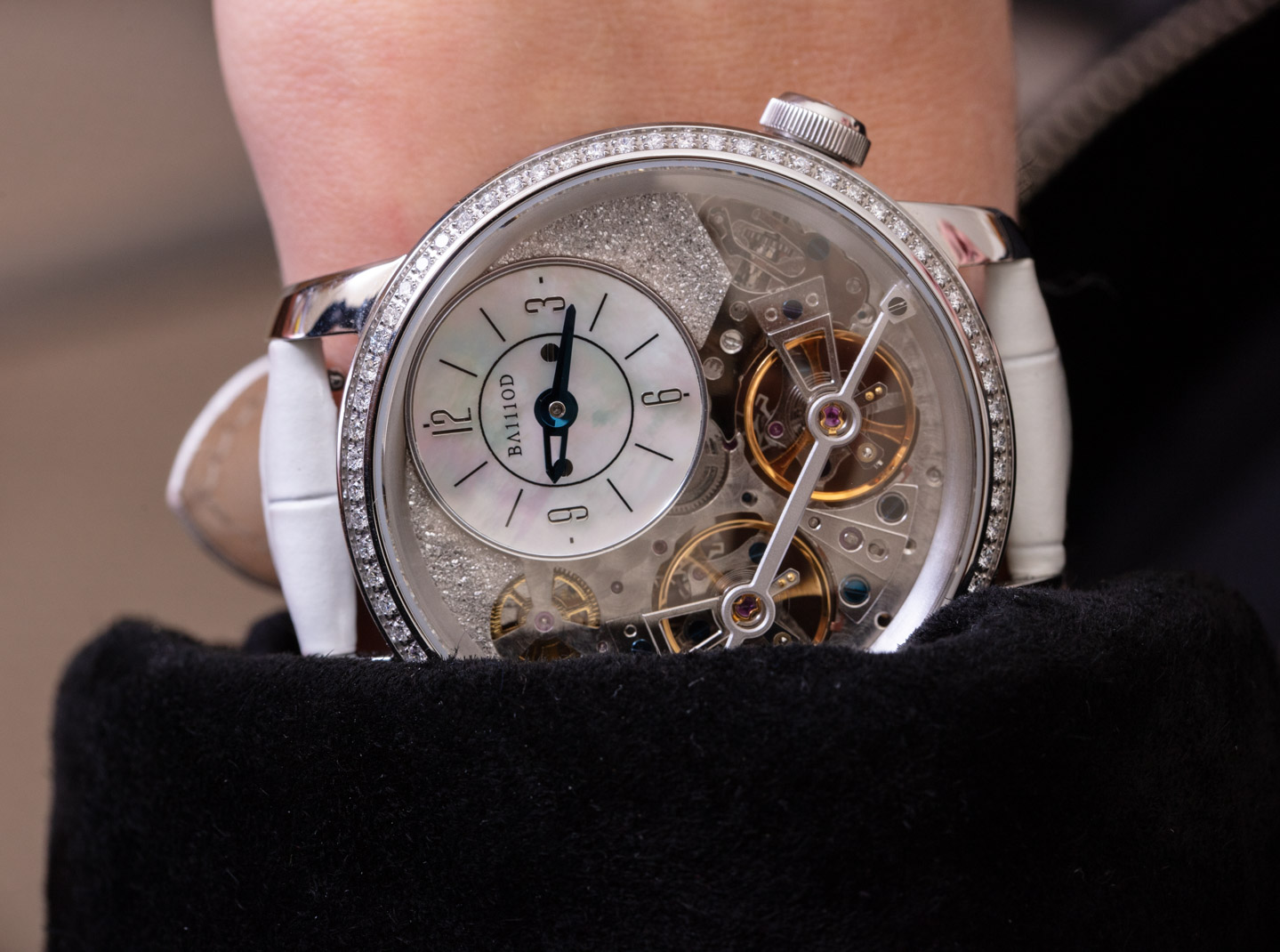 When I went hands-on with the first BA111OD Chapter 1 watch, the brand’s founder seemed most surprised that I spent so much time talking about the product itself. Yeah, that is what watch nerds geek out on. We love the manifestation of an industrial design idea on the wrist, including bonus points for when price points positively surprise us. While things will be different for the Swiss Made Chapter 3 watches, BA111OD Chapter 1 and Chapter 2 watches get a bit too much flack for containing Chinese movements. Even though the Swiss-founded and -operated company is entirely transparent about this, they are getting a bit of heat from it. I can understand the sentiment, but the complaints miss the point. There aren’t any non-Chinese movements that operate like this for this price point. The movements are each individually tested and regulated for quality and performance, and the watches that contain them are not overpriced given the overall quality of the case and its components.

The point of the movements is to offer an additional level of spectacle to an automatic-winding, time-only watch. The movements are actually decorated using hand-operated machinery, and they are respectably accurate. I’m the first person to complain when a watch has a movement in it that insults the price point. That simply isn’t the situation here. BA111OD wanted wearers to enjoy the visual spectacle of mechanical watch movements in an affordably priced product and have them be designed and engineered by Swiss watchmaking talent. That they are produced of Asian components is not much different from the vast majority of BA111OD’s more expensive competitors in Switzerland. One might find less expensive watches with what appear to be versions of this same movement, but none of those watches will have the dial, case, and overall quality experience here. The value of watches is really more than just movement-deep. 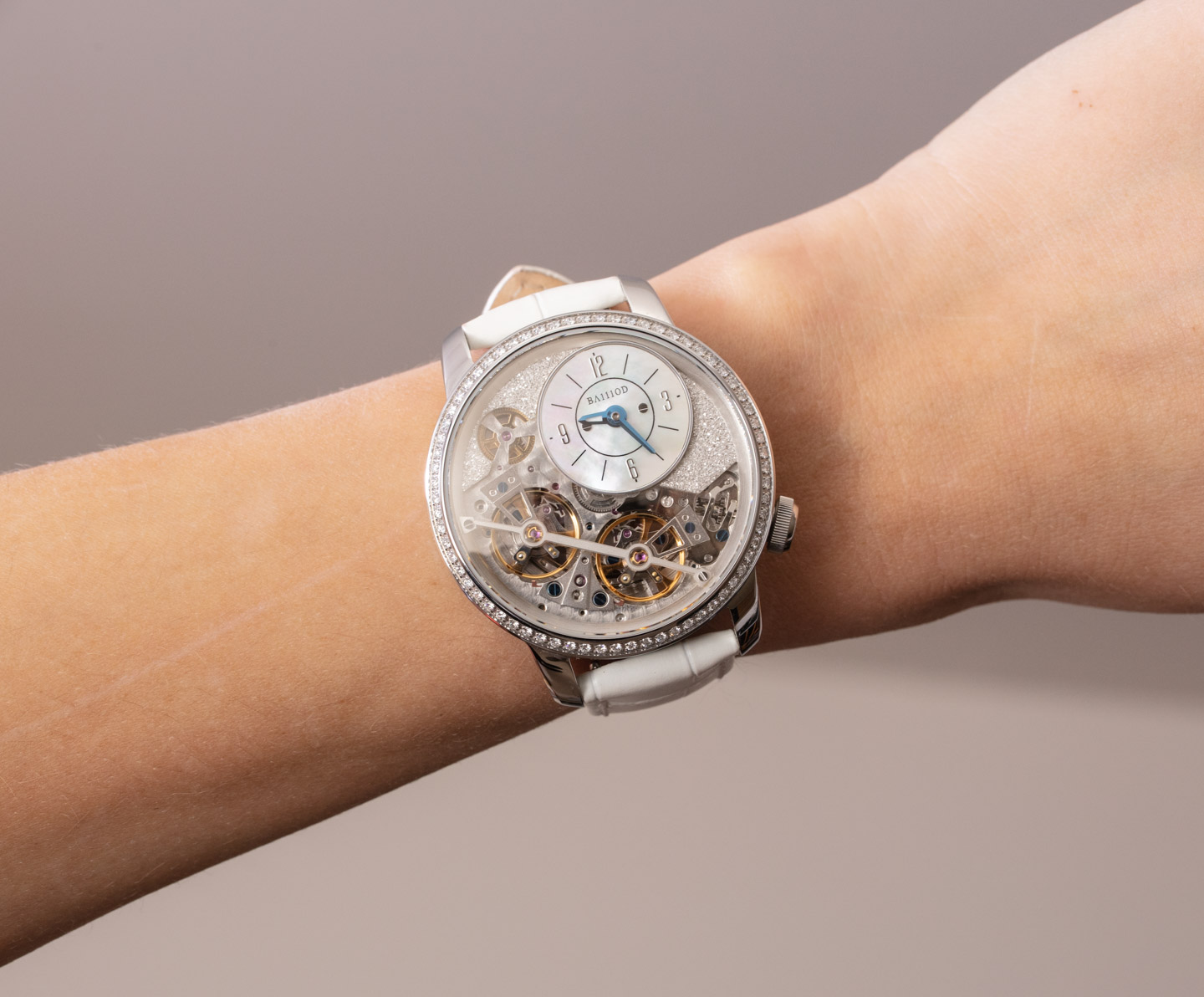 A major point of the Chapter 2 collection is to show the value-laden beauty of lab-grown diamonds. The bezels have nearly 0.7 carats of round-cut VS to VVS diamonds on them — while a more basic model has polished steel bezels with two diamond stones set into the movement. Lab-grown diamonds are less expensive than natural diamonds, but not that much cheaper. They are chemically identical to traditional diamonds and because they are engineered; they are typically produced to be very clear and without color.

This particular model has a “frosted” movement surface finishing along with other parts that are given more traditional polishes, such as perlage. Frosted finishing involves a light hammering/chiseling technique that creates small organically patterned facets that reflect light. Even though most of the dial is reserved for a view of the movement, the off-centered dial for the hours and minutes is actually rather legible. In addition to this mother-of-pearl dial, Chapter 2.1, BA111OD also offers a Chapter 2.2 watch with a deep blue aventurine dial. 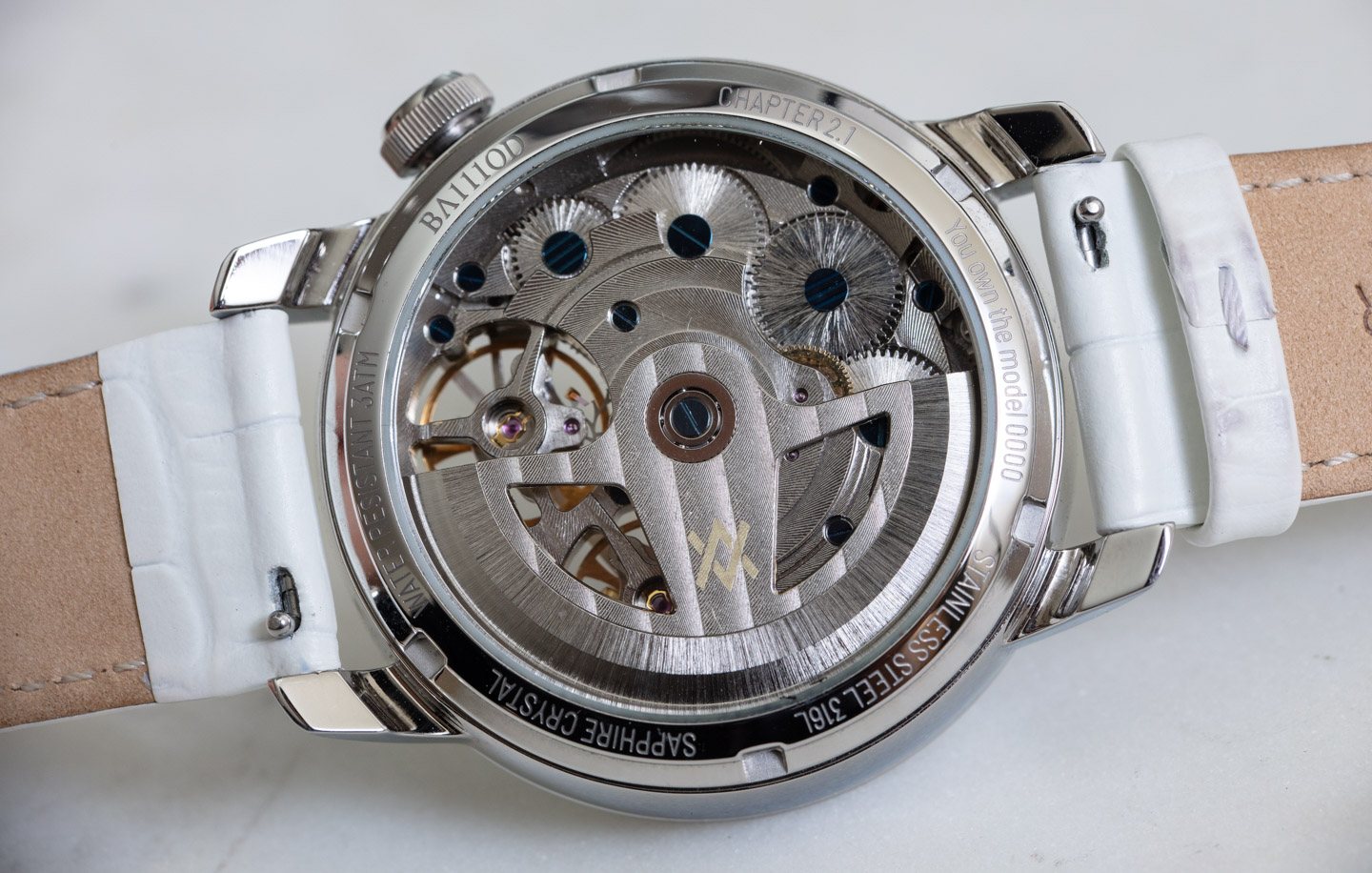 The automatic movement operates at 3Hz with 42 hours of power reserve. It has double balance wheel systems, which are visible through the dial. They offer the bulk of the visual animation you can enjoy when viewing the dial, and the effect is satisfying. The Chapter 2 collection does away with the dial’s optional central seconds hand, which is outfitted on the Chapter 1. This does remove some functionality, but it also leaves the dial of the Chapter 2 feeling more elegant and less sporty.

Over the dial is a very high-quality (for the price) domed sapphire crystal with a double-AR coating. While some glare is to be expected, given the dramatic curve, I don’t know that I’ve seen too many under-$1,000 watches do a domed sapphire crystal this well before. The Chapter 2 case is 42mm-wide (a bit smaller than the Chapter 1), with a 49mm lug-to-lug distance. The watch isn’t very thin, but its soft, rounded curves help the visual mass seem less prominent. The strap comes on quick-release bars but is actually quite comfortable to wear. Case water resistance is 30 meters. 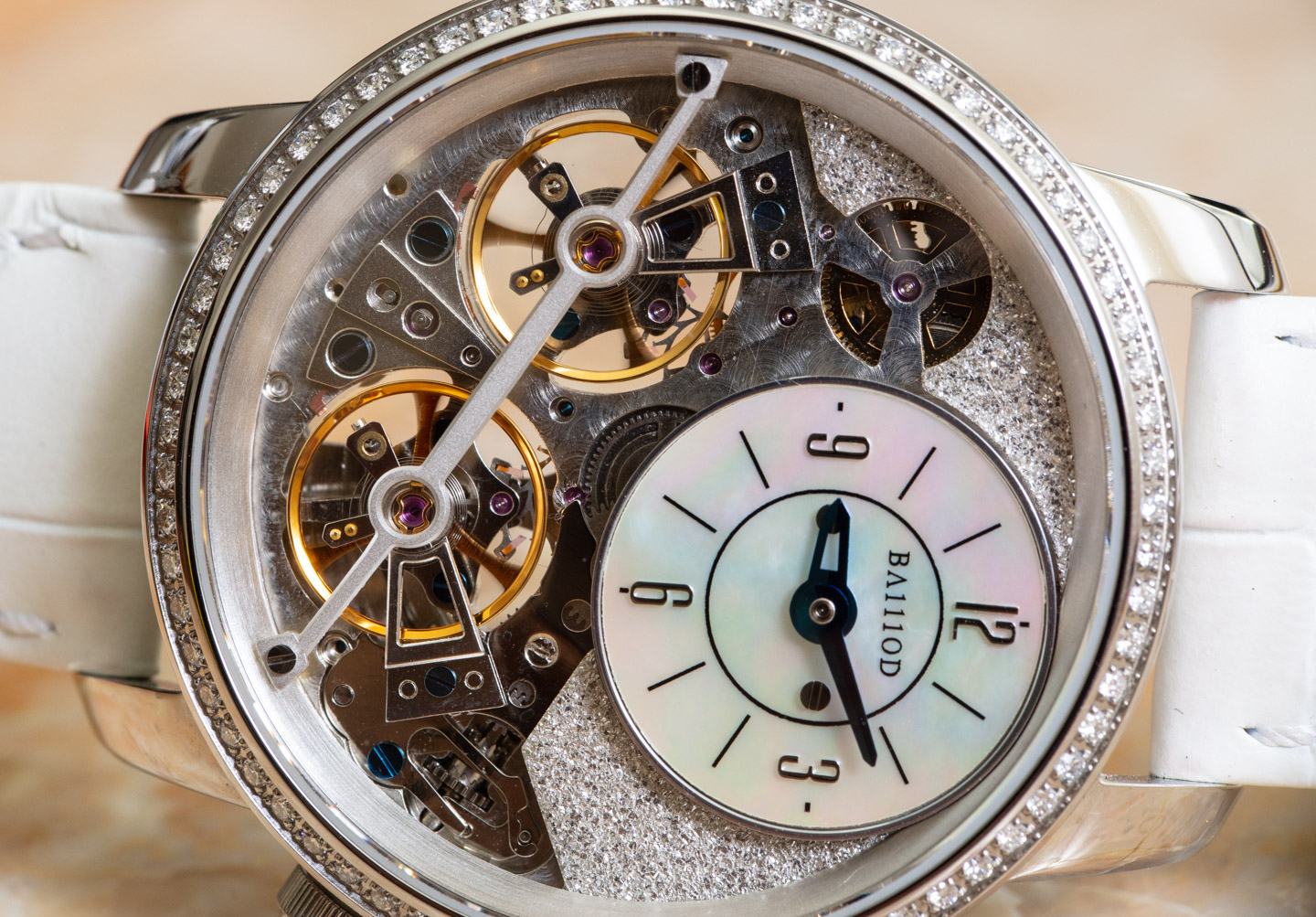 One of the most interesting things I learned about the first year or so of BA111OD’s business was how many of its customers came from in and around “the watchmaking valley” in Switzerland. Something like 70% of the customers were more or less watch industry natives. That tells me that people who are the most hostile to outside product competition, and who are the most ardent supporters of Swiss Made value, still find these products acceptable enough to buy them en masse. I simply say that for the naysayer who still wants to suggest that BA111OD watch value propositions should be even further questioned due to their movements. In any event, it looks like the sports watch in store for the Chapter 3 watches is going the Swiss Made direction, as it is.

The BA111OD Chapter 2 Diamonds Collection timepieces are really a lot of fun. With a masculine strap, a guy could easily enjoy one of these (and not look that weird), and on the stock straps, the Chapter 2.1 watches are pretty and poignant, ideal for that feminine mechanical watch lover in your life. There is a slight learning curve to purchasing one, but that isn’t really a big deal. I think the good value and good looks are worth it. And in an era when luxury timepiece consumers get the best experiences from brands who care and understand them, BA111OD is certainly a brand the community can support. The BA111OD Chapter 2 Diamonds collection 2.1 watch is 595 Swiss Francs (about $670). For quick access to buying one, you can visit the aBlogtoWatch Community storefront at BA111OD here.