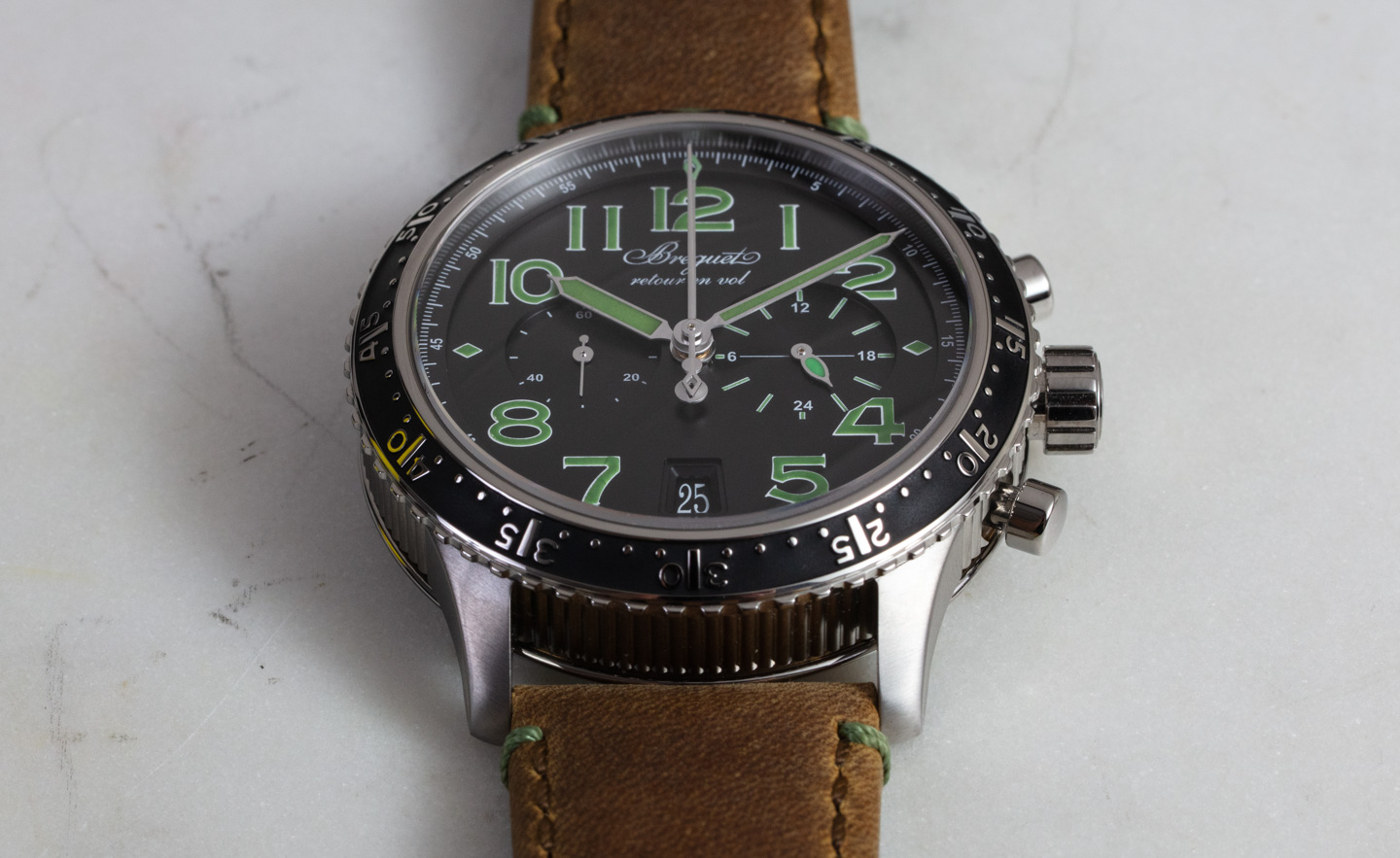 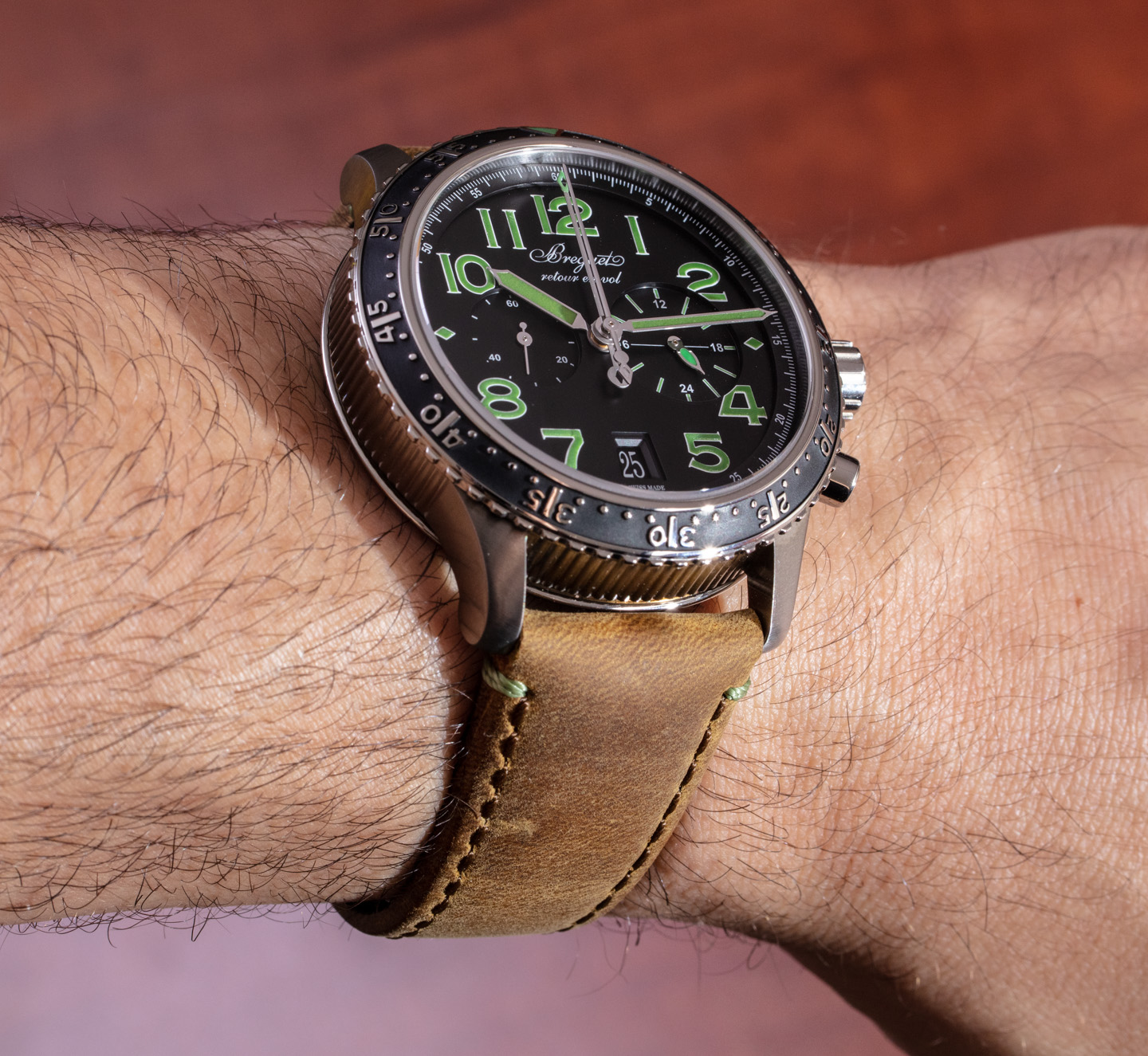 Breguet, the maker of (in my opinion) the world’s most beautiful pilot’s watches, has just released this new limited-edition set of Type XXI Titanium watches known as the Type XXI 3815. This is a follow-up to the Breguet Type XXI 3810 Titanium (aBlogtoWatch hands-on here), which came out a full decade ago in 2011. The two Type XXI Titanium watches have just as many similarities as they have differences, and the new Type XXI 3815 Titanium Chronograph models are a lovely, if quirky, addition to Breguet’s aviation watch collection.

While most people think the period of Mr. Abraham-Louis Breguet (who died around 1800) to be the core inspiration for most of today’s Breguet watches, his relative Louis-Clement Breguet was involved in the world of aviation in the early 20th-century with Breguet Aviation – a serious new direction for the brand’s existing historic personality. Breguet produced versions of the famed Type XX (which is a dial-style) pilot’s chronograph watch, up until the 1950s or 1960s, I believe. It was that era’s Breguet timepieces that account for the inspiration behind the modern Type XX, Type XXI, and Type XXII timepiece collections. 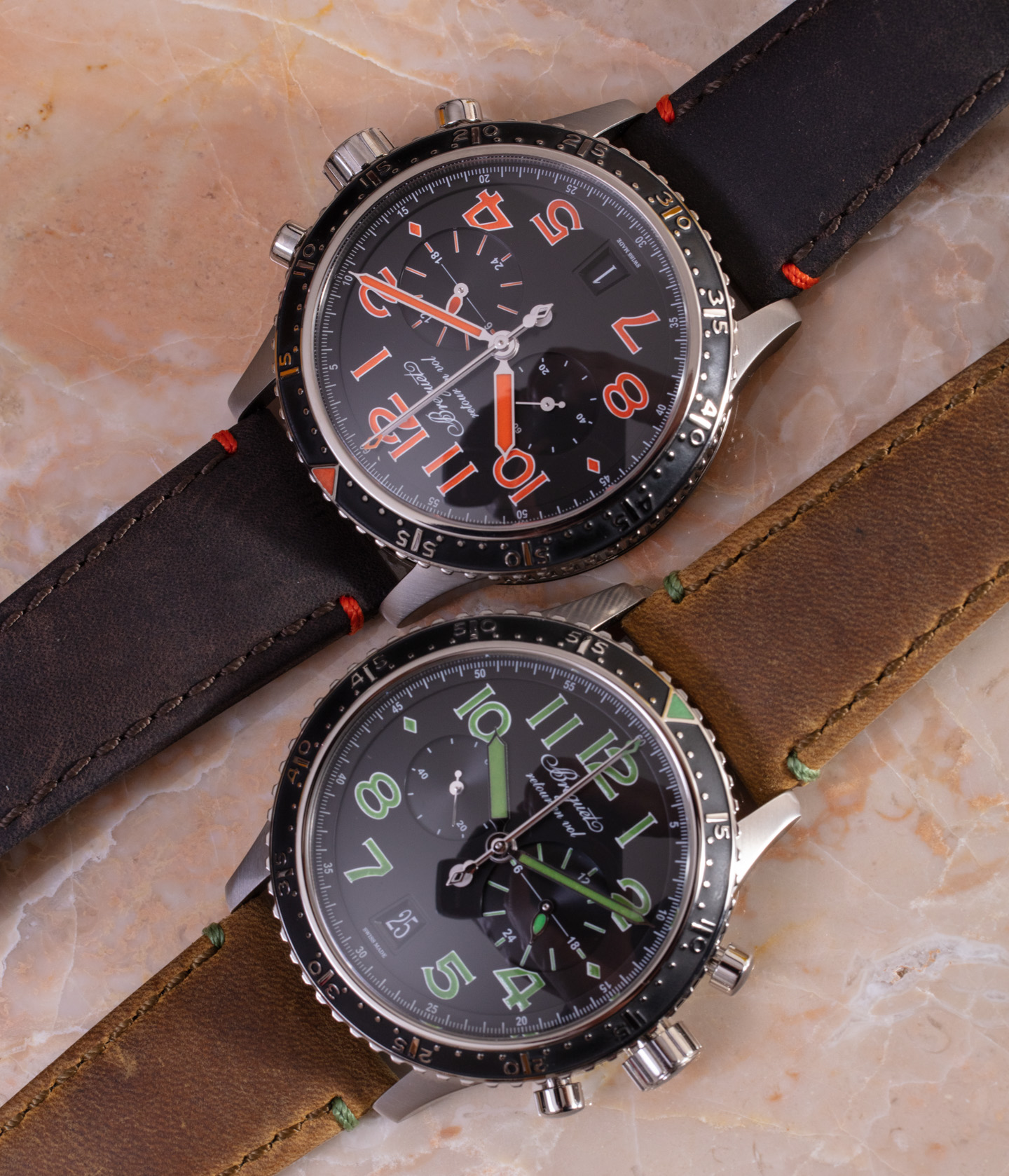 The Type XXI has come in a number of versions and, frankly, I think there are a lot of collectors who wish Breguet had done even more in this area on account of how lovely these watches can be. (Note that the pictured models are pre-production samples, and there may be refinement enhancements and other tweaks on the final retail pieces.)

What I appreciate about Breguet’s pilot watches is the touch of Belle Epoque in the design, which is distinctive from the more strictly utilitarian pilot watches of similar years. I don’t think Breguet, at the time, wanted to make military pilot watches as much as it wanted to make timepieces for gentlemen aviators. Today’s gentlemen aviators have plenty of wristwatch choices available to them, but there is a special personality that no brand other than Breguet seems to offer in a classic-style pilot’s chronograph.

And that vintage aviator style was first made (more) modern with the original Type XXI 3810 Titanium, which now continues in a different way with the 3815 pieces — of which there are two at launch. The two models are the green-accented reference 3815TI/HM/3ZU and the orange/red-accented reference 3815TI/H0/3ZU. Each has a 42mm-wide titanium case (that you’d really not know was titanium, just by looking at it). The finishing is so complex, and there is so much going on with the case, that it is hard to not mistake it for steel. Once you hold the case in your hand, you can immediately tell that the movement inside is clearly heavier than the case — and the overall lighter weight makes it very comfortable to wear. 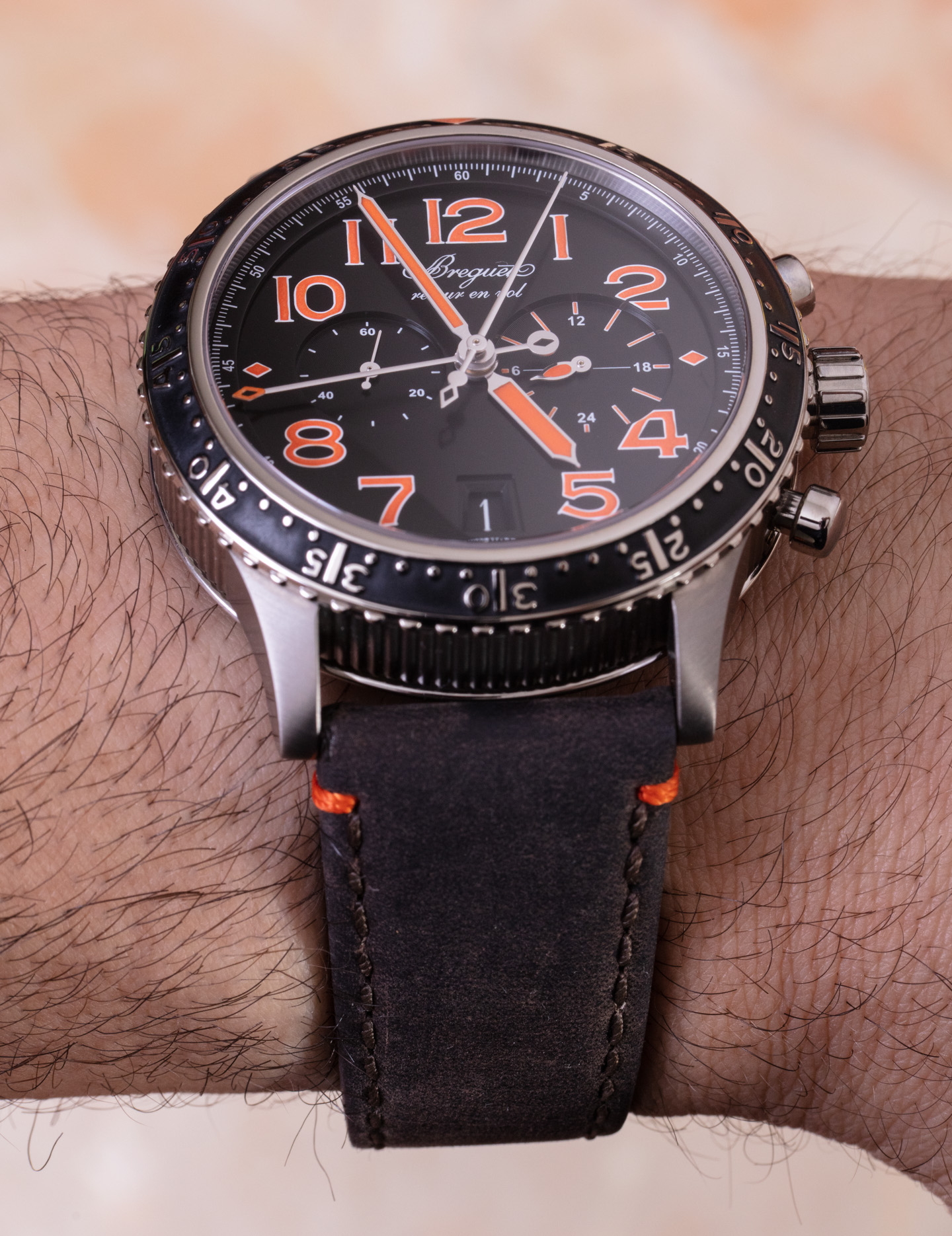 The case is also 15.2mm-thick and has a very acceptable lug-to-lug distance of just over 48mm. The case is further water-resistant to 100 meters and has a domed sapphire crystal over the dial. There is a bit of glare, but it doesn’t appreciably remove from the legibility of the otherwise prominent hands and hour markers. The Type XXI 3810 did not have a display caseback, but the Type XXI 3815 does, which is great because it is a real shame to have a Breguet timepiece where you can’t view the movement.

Around the dial is a bi-directional ratcheting rotating bezel that is pleasantly vintage in style, and the same as on the 3810 save for the colored lume pip at the 60-minute marker. The Type XXI 3815 dial itself takes some explaining because while it has a similar movement (same architecture but more modern parts) as the 3810, it removes the chronograph hours counter on the dial for aesthetic purposes. There is also an appreciably larger 24-hour indicator subdial than the subsidiary seconds dial to its right. This is asymmetric look originally comes from an original Breguet aviation watch produced in the mid-20th-century as I understand it. But it wasn’t Breguet that popularized this look in the modern era. 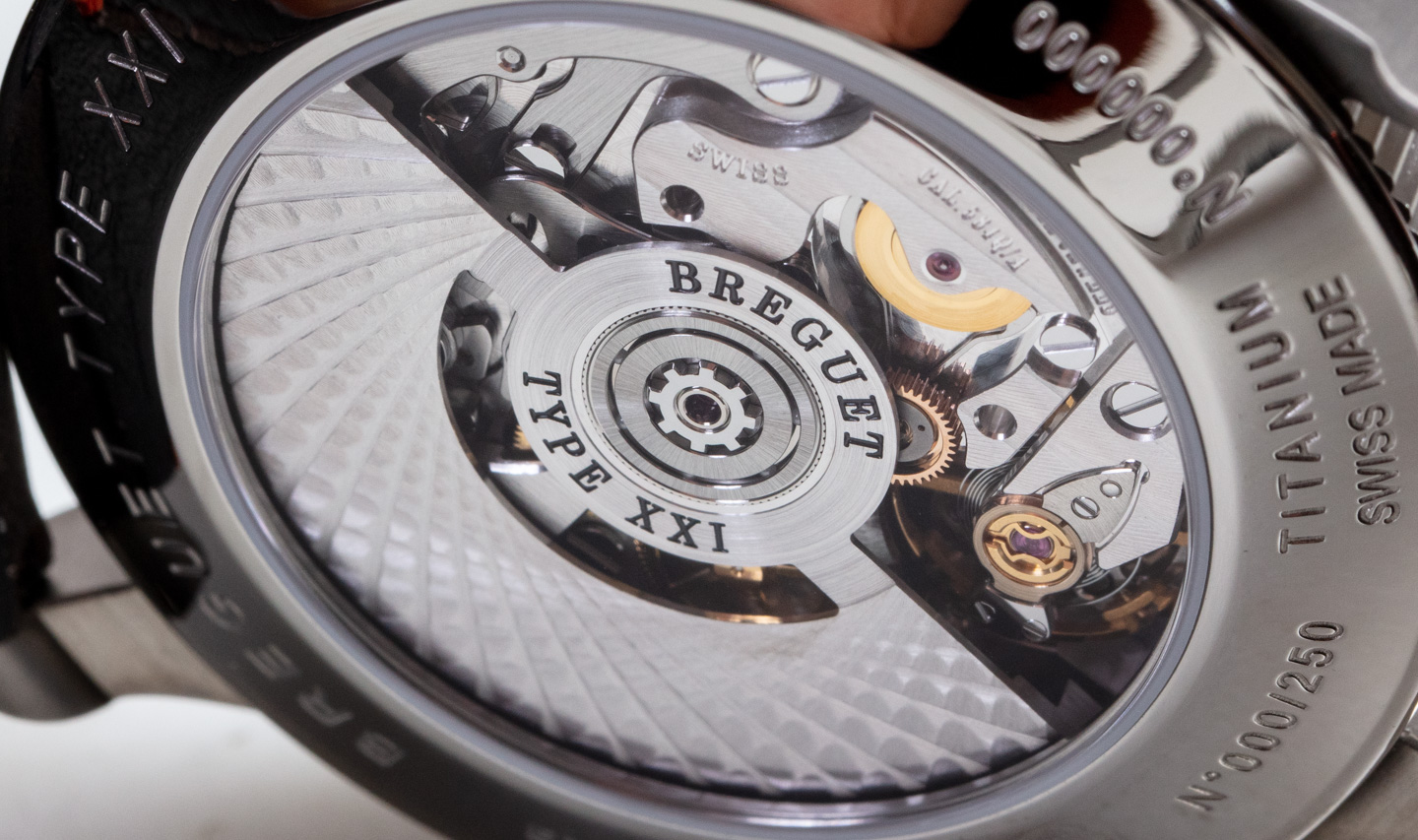 That was actually sister Swatch Group brand Longines, when it came out with the Avigation Big Eye Chronograph (aBlogtoWatch review here) in 2017. The cock-eyed chronograph with its large register was a hit and apparently based on the classic Breguet model. Perhaps inspired by the success of the Longines Big Eye Chronograph, Breguet decided it would err on the side of the avant-garde for a limited-edition Type XXI 3815 collection — and that is exactly what the brand did here.

The dial is quirky, for sure, but highly effective and unlike most other pilot watch chronograph dials. This is a central seconds and minutes chronograph, which means that there are central hands to count both the chronograph seconds and minutes (up to 60). The 12-hour chronograph subdial has been removed, and at 3 o’clock on the dial is a synchronized 24-hour hand that functions as an AM/PM indicator. The in-house Breguet movement also features the date via a window at 6 o’clock. (Note that the chronograph also features a handy flyback function.) More on the movement details below. 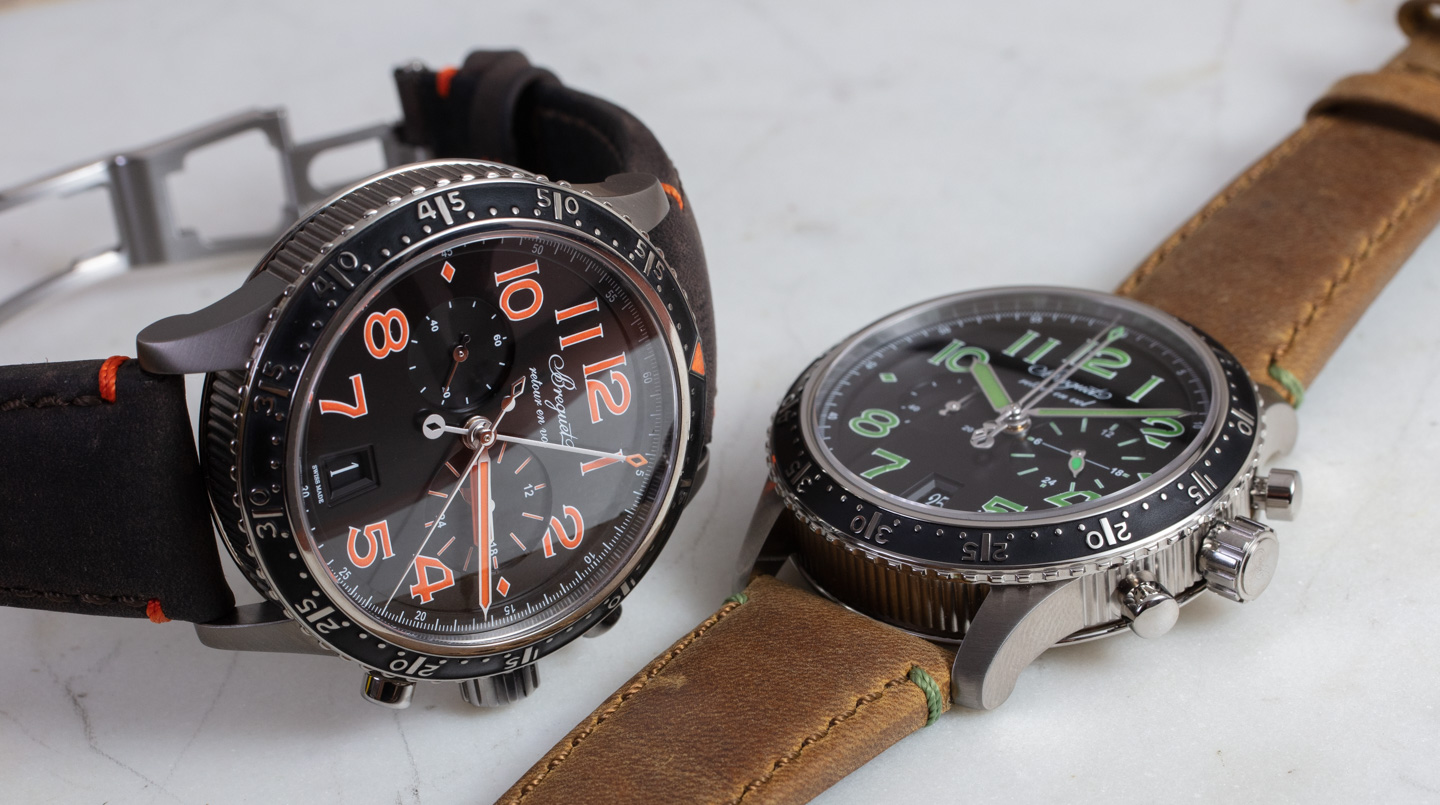 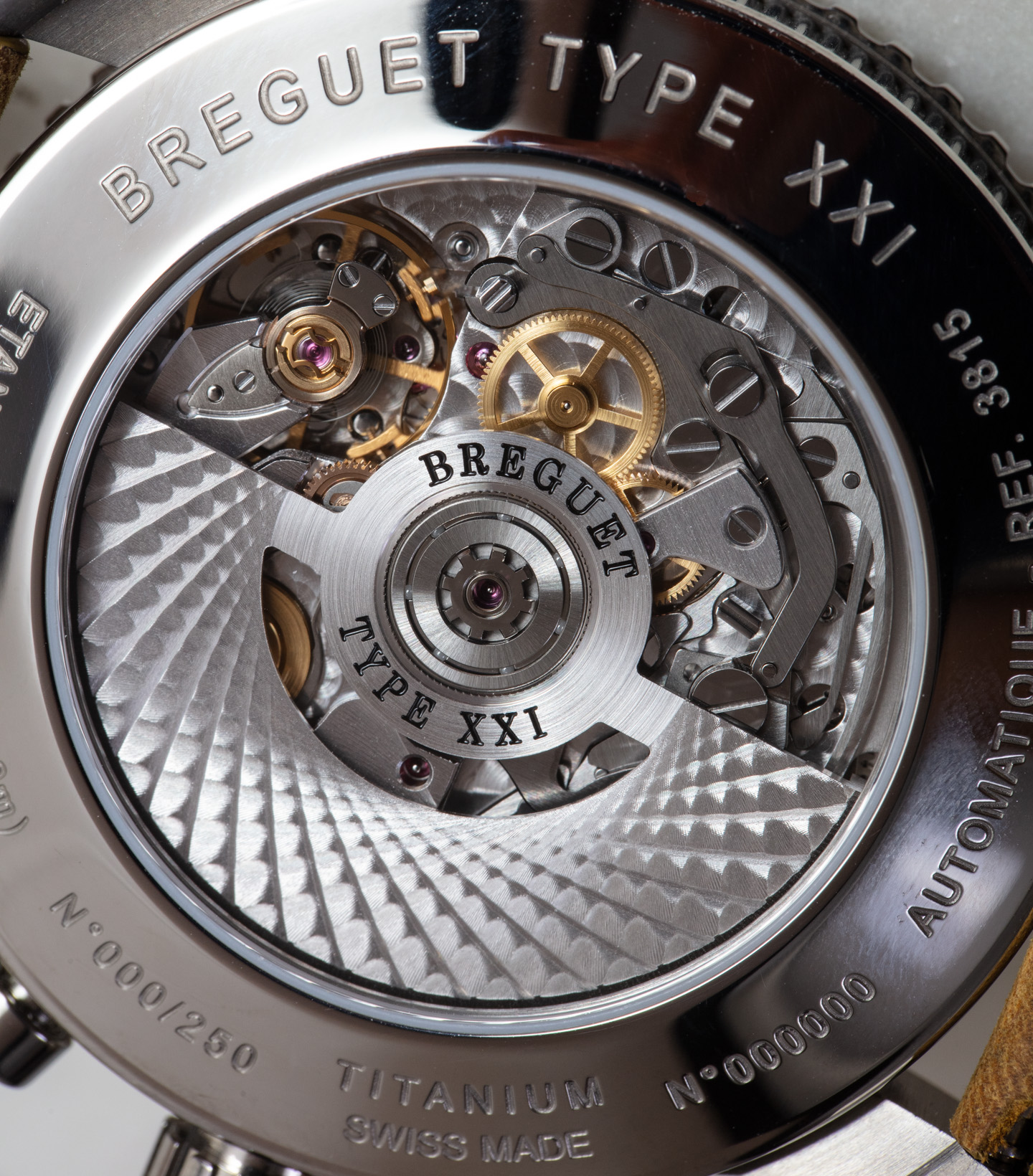 The subdials are recessed a bit, and there is a small raised rehaut ring around the face, which helps further add visual depth to the dial. The slightly glossy black faces are complemented with a lime green or passionfruit-orange for the hands and hour markers. On the orange-accent model, the hands and hour markers are slightly different color shades, but on the green-accented model, the colors of the hands and markers match more precisely. Each of the watches has its own distinctive brown-colored leather strap that reminds me of classic bomber jackets. The watches come on high-quality steel metal folding deployant buckles.

Inside the Type XXI 3815 Titanium Chronograph watches is the in-house-made Breguet caliber 584Q/A automatic mechanical movement. It’s really nice to look at through the caseback window, especially with the machine-engraved automatic rotor. The Type XXI 3810 included the Breguet caliber 584Q movement, while the 3815 has 584Q/A. How do they differ? Breguet doesn’t explain it all, but comparing the tech specs is rather interesting. First, the more modern 584Q/A has a silicon (versus metal-based) balance spring, as well as a more sophisticated escapement that also has silicon elements. The 584Q/A watch has one more jewel (for a total of 26) as compared to the 584Q, but interestingly it has far fewer total parts. The 584Q is comprised of 319 components and the 584Q/A is made up of only 232 parts. That is 87 fewer parts and a rather remarkable level of making a more efficient movement. Performance is also a bit up for the 584Q/A movement, which also operates at 4Hz but now offers 48 hours of power reserve, up from 45 hours in the 584Q. 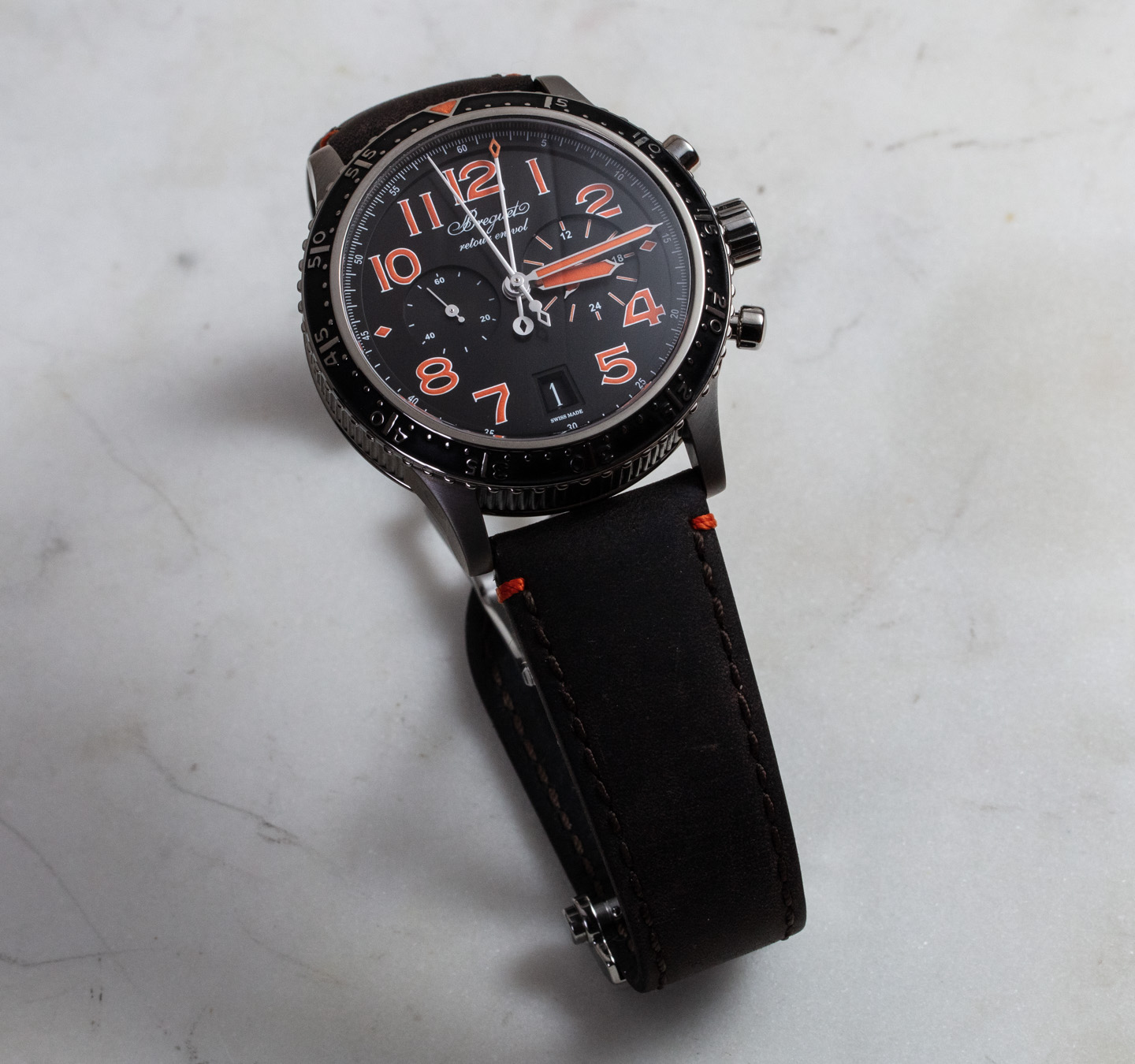 What I like most about the limited edition of 250 pieces Breguet Type XXI 3815 Titanium Chronograph watches is that they are unexpected in their visual style when you first look at them. It is rare to be shocked by the presentation of a Type XXI model, as the aim of these watches is to be a classically refined wrist instrument. The bright colors are, however, hip and trendy, and they grow on you very quickly. The cost matches what we’ve come to expect for Breguet’s latest sporty chrono: The Type XXI 3815 Titanium Chronograph reference 3815TI/HM/3ZU and 3815TI/H0/3ZU watches are priced at $14,900 USD.