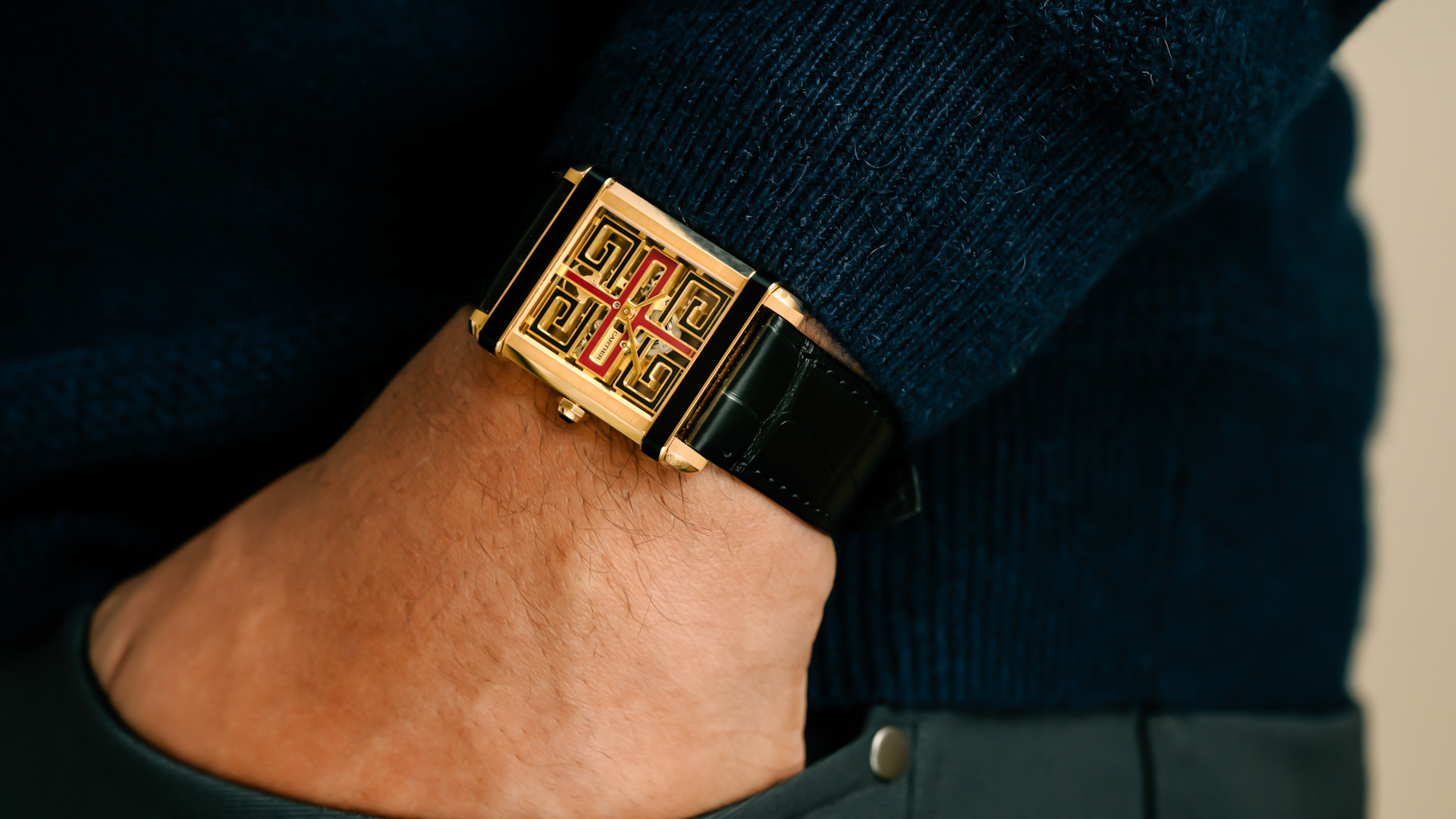 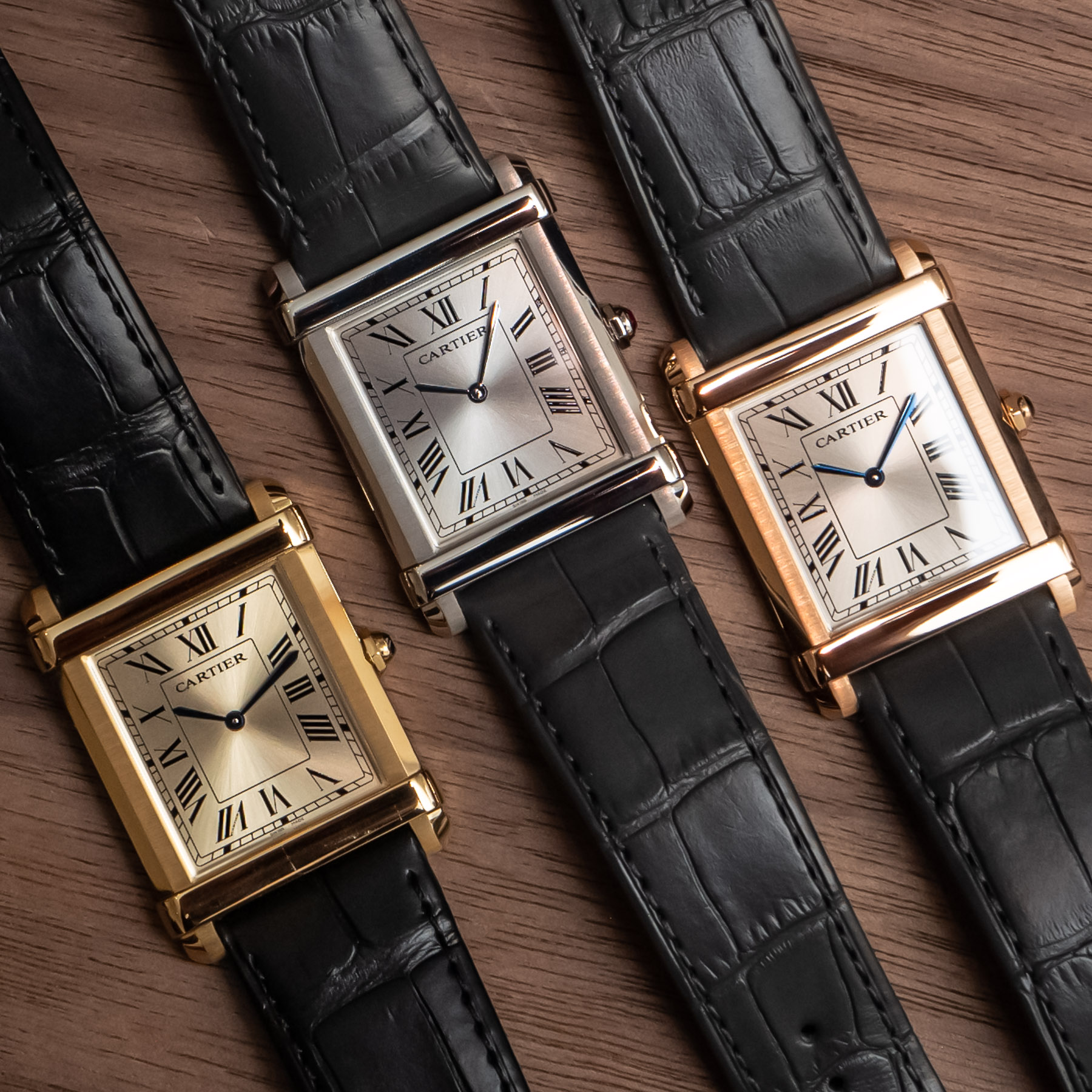 Now that we are a week out of Watches & Wonders, I’ve finally had the chance to slow down and take a more clearheaded inventory of which brands released what. Going through everything in my mind, it’s honestly hard to have knocks against Cartier this year. Without make too much of a fuss, Cartier posted a host of excellent releases like the new lacquered Santos-Dumonts, the Coussin collection, a pair of stunning Tank Louis watches, and, of course, that Masse Mystérieuse with the entire movement housed within the rotor. For me, though, it was the two new Privé Tank Chinoise models that stood out above all others.

The Tank Chinoise has always been something of an outlier for the brand, especially in contemporary times. The first Tank Chinoise dates back to exactly a century ago in 1922 — though, these days, I can’t think of the last time a new version was released. (I just looked into this and — wow — it’s been eighteen years since a new Tank Chinoise was released, back in 2004). For those unfamiliar with the history of the Chinoise, it was actually traditionally done in a square case until this year, when the whole collection went rectangular. It’s a design decision that definitely makes sense, especially when one considers that it’s basically in Modern Cartier Design 101 that “Tank=Rectangle” and “Santos=Square.” Still, it would have been cool to just have one in the original square case, but I’m really not hung up on this. 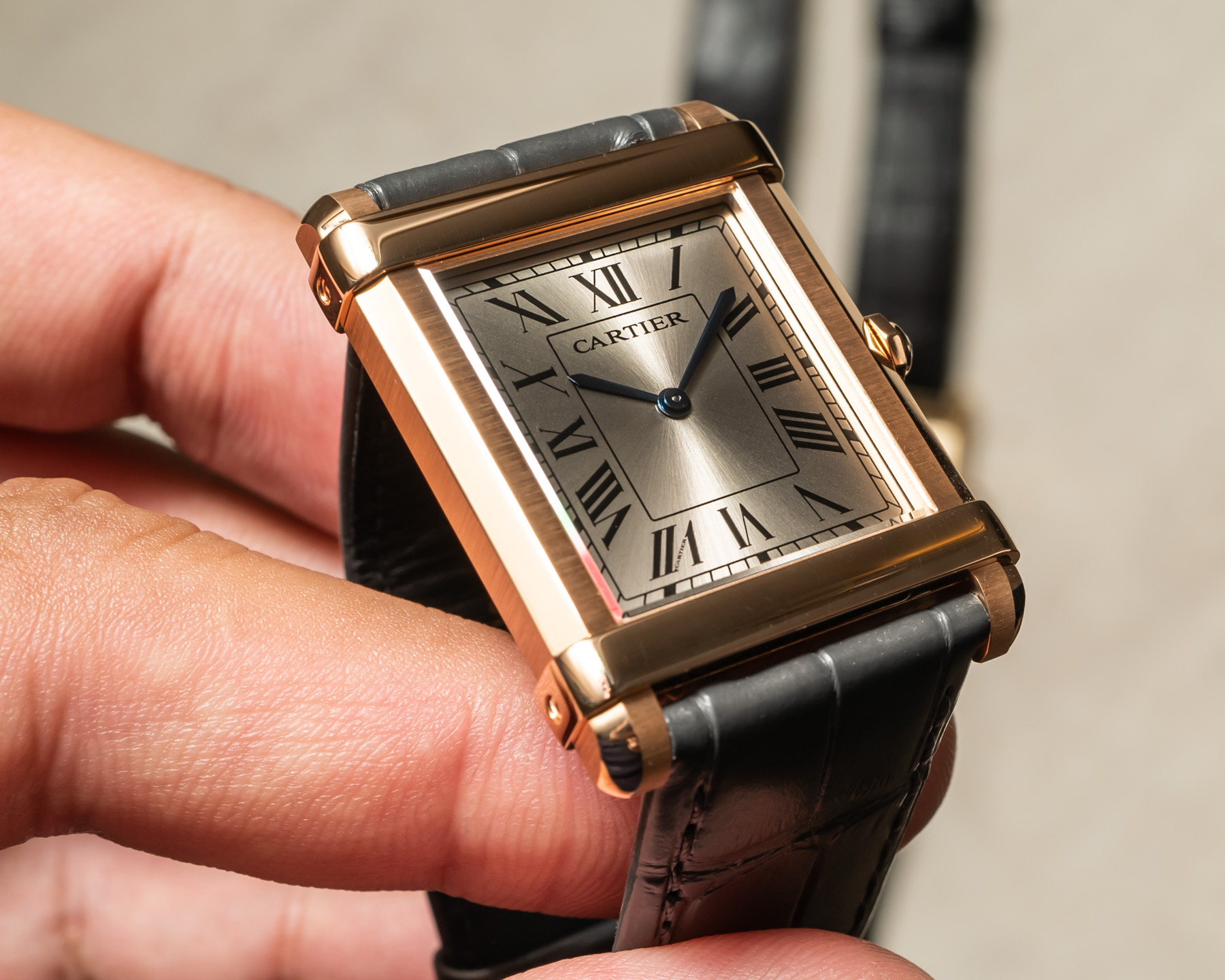 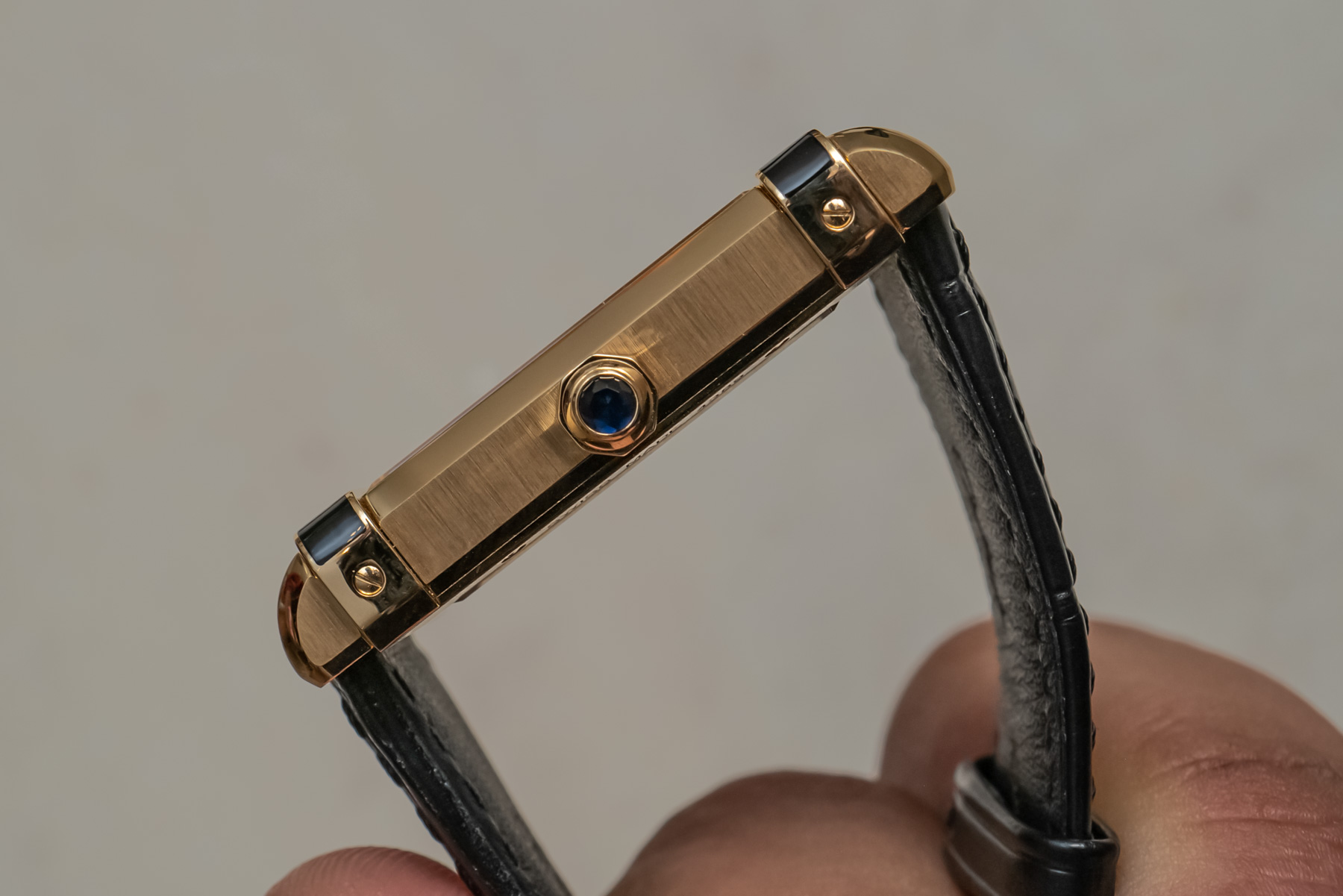 Of course, it’s not the case shape but rather the brancards that characterize the Tank Chinoise. Those parallel stylized bars running across the top and bottom of the case were inspired by Chinese and East Asian temple porticos (though these jutting covered entryways are ubiquitous in many architectural styles throughout world history). As with just about everything having to do with design, the aesthetic is a matter of taste. If you couldn’t tell, I love the two horizontal brancards, always have. They give the case additional flare but in a very substantive, almost stabilizing way that also serves as a partial frame that avoids boxing the dial in by having “open” sides. 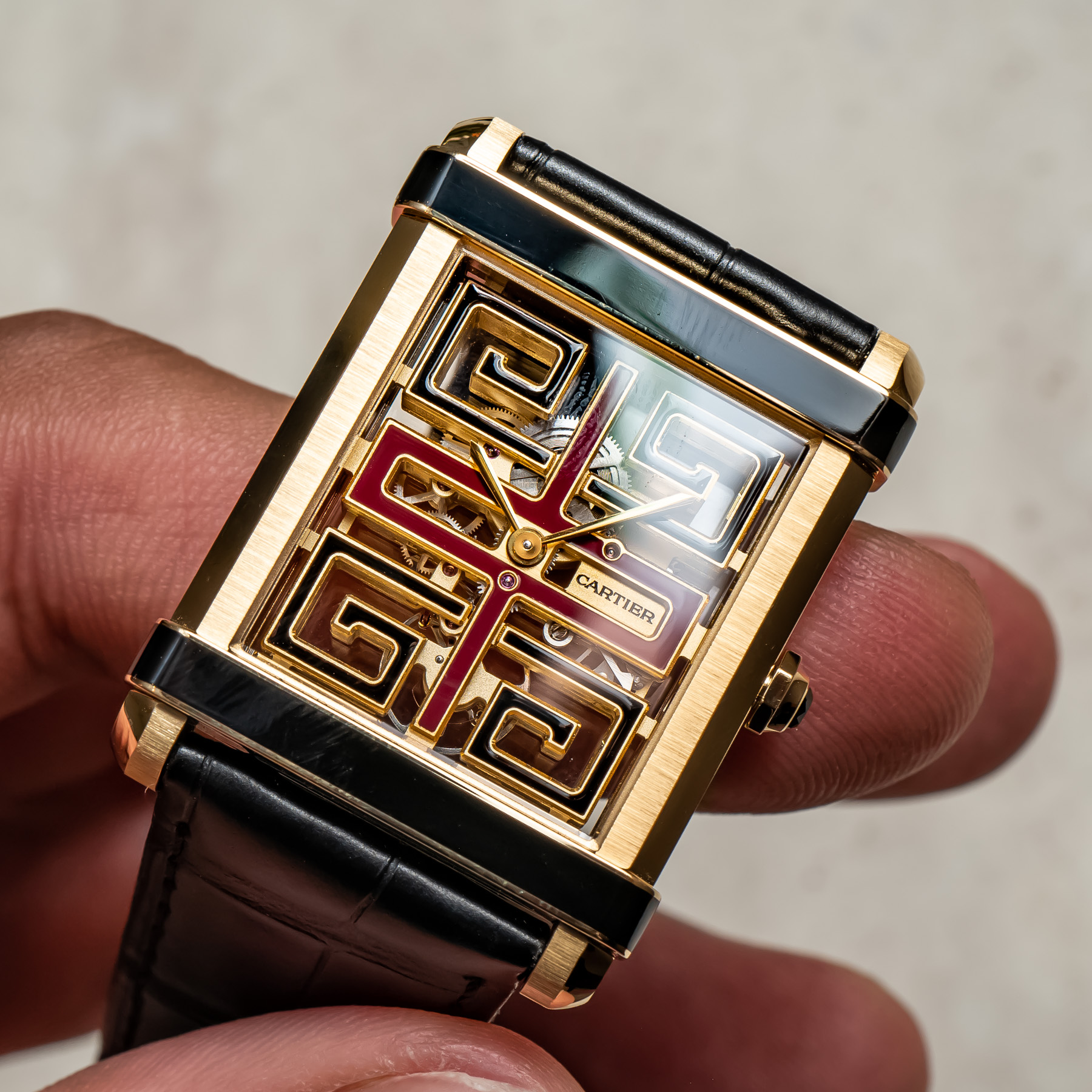 Now, onto the watches at hand. First off, keep in mind these are Privé pieces, which means they are designed to pay tribute to iconic Cartier pieces from the past. It also means they are very limited in production and significantly pricier than standard production Cartier watches. There are two models of the new Tank Chinoise, each with a couple of sub-variants. Obviously, the models with open-worked dials and skeletonized movements grabbed me immediately. These pieces go all-in with the dial design inspired by traditional Chinese window designs that, while a bit on-the-nose, are executed incredibly well. The open-worked dials are finished with black and red lacquer on the yellow gold model (which has matching black lacquer done on the brancards) and blue and red on the platinum model (two versions of this one with either polished platinum brancards or diamond-set). 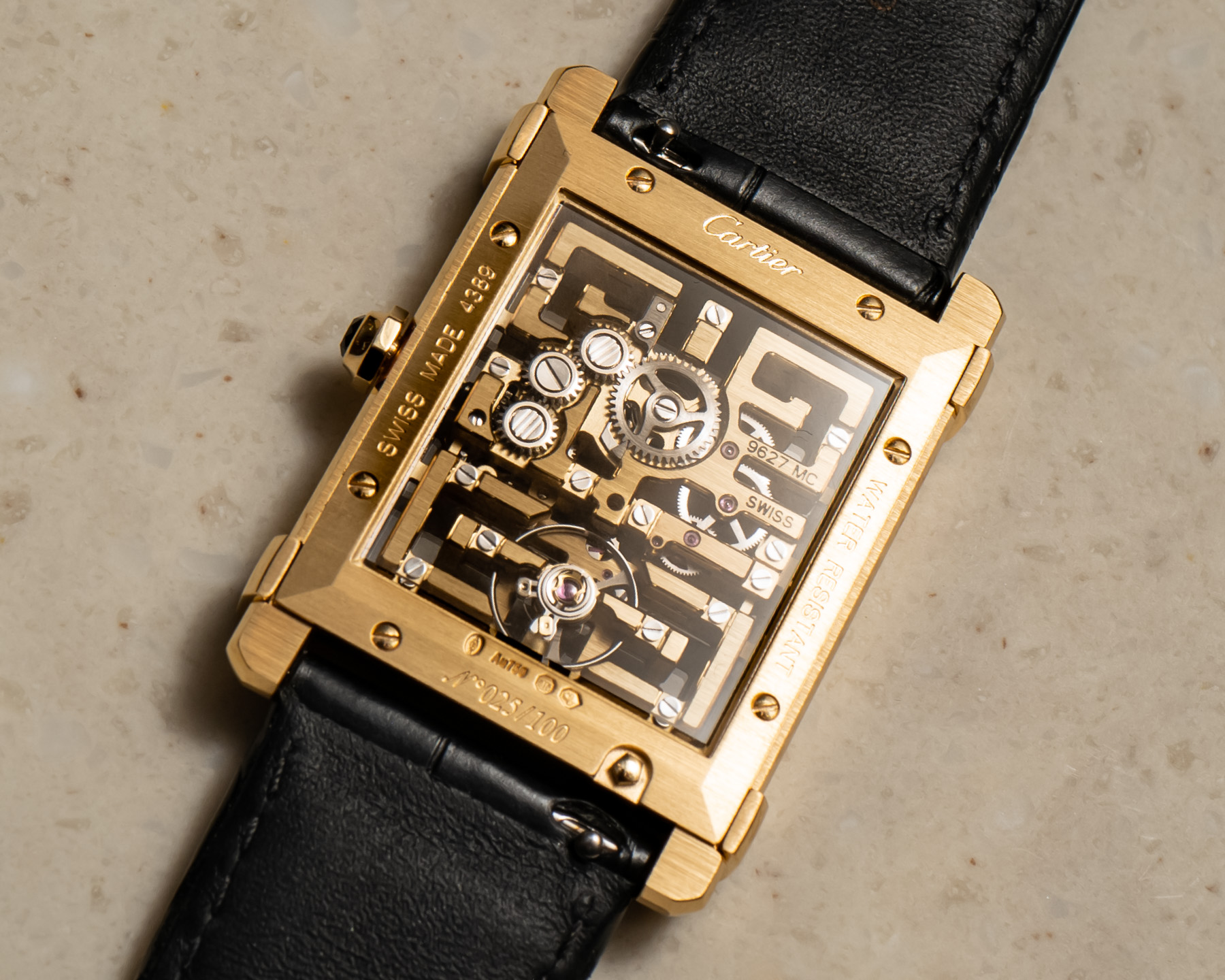 Though the differences in case size between these open-worked Tank Chinoise and the trio of more traditional pieces isn’t huge, there are differences. The open-worked cases measure 39.5mm-tall, 29.2mm-wide, and 7.7mm-thick. Looking from the caseback, you can see the new manufacture 9627 MC manual-wind movement that was specially developed for this watch. A gold echo of the lacquered pattern on the front of the dial, this is Cartier at its best and a true object of desire for people like myself. Manually wound, the 9627 MC operates at 21,600 vph and has a 38-hour power reserve. 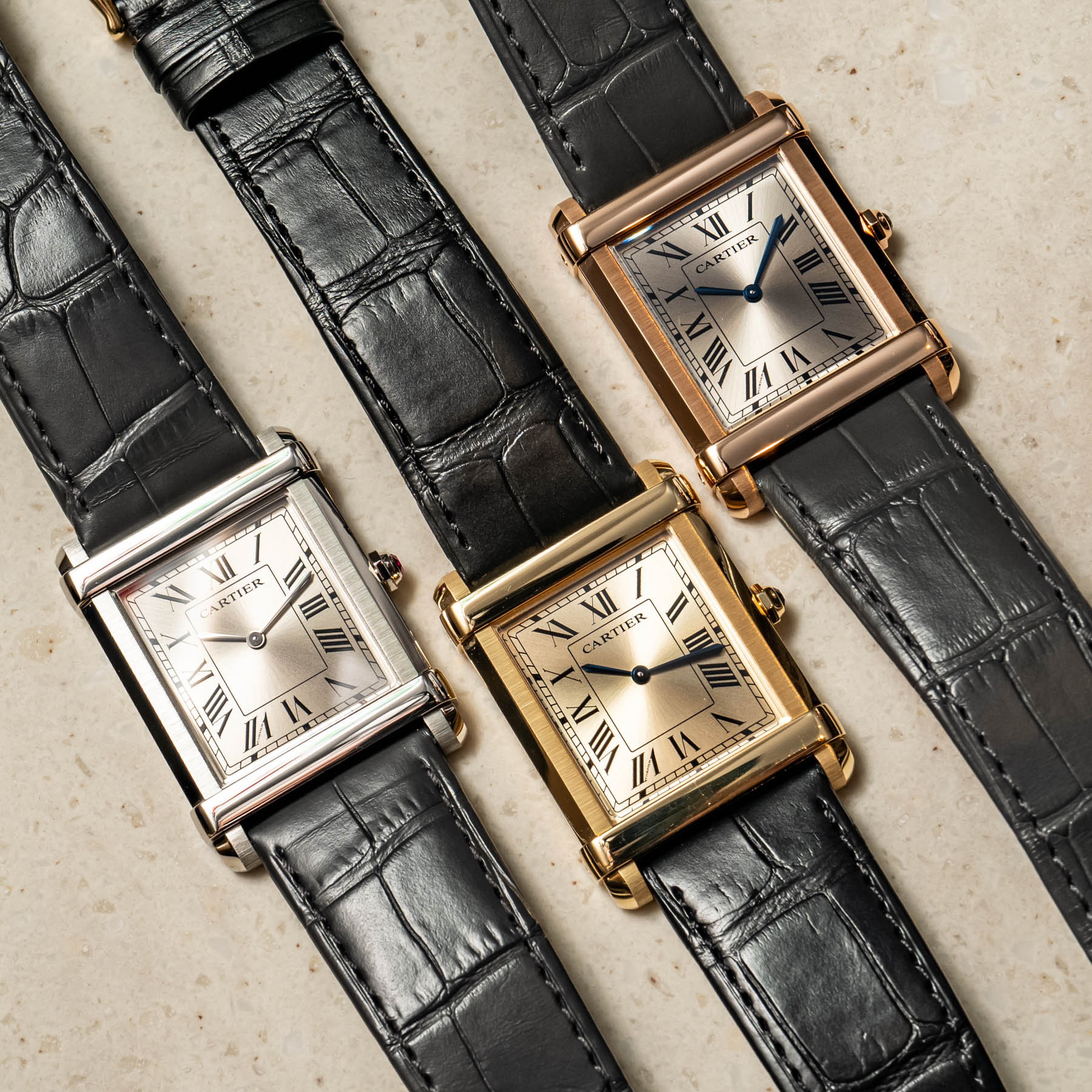 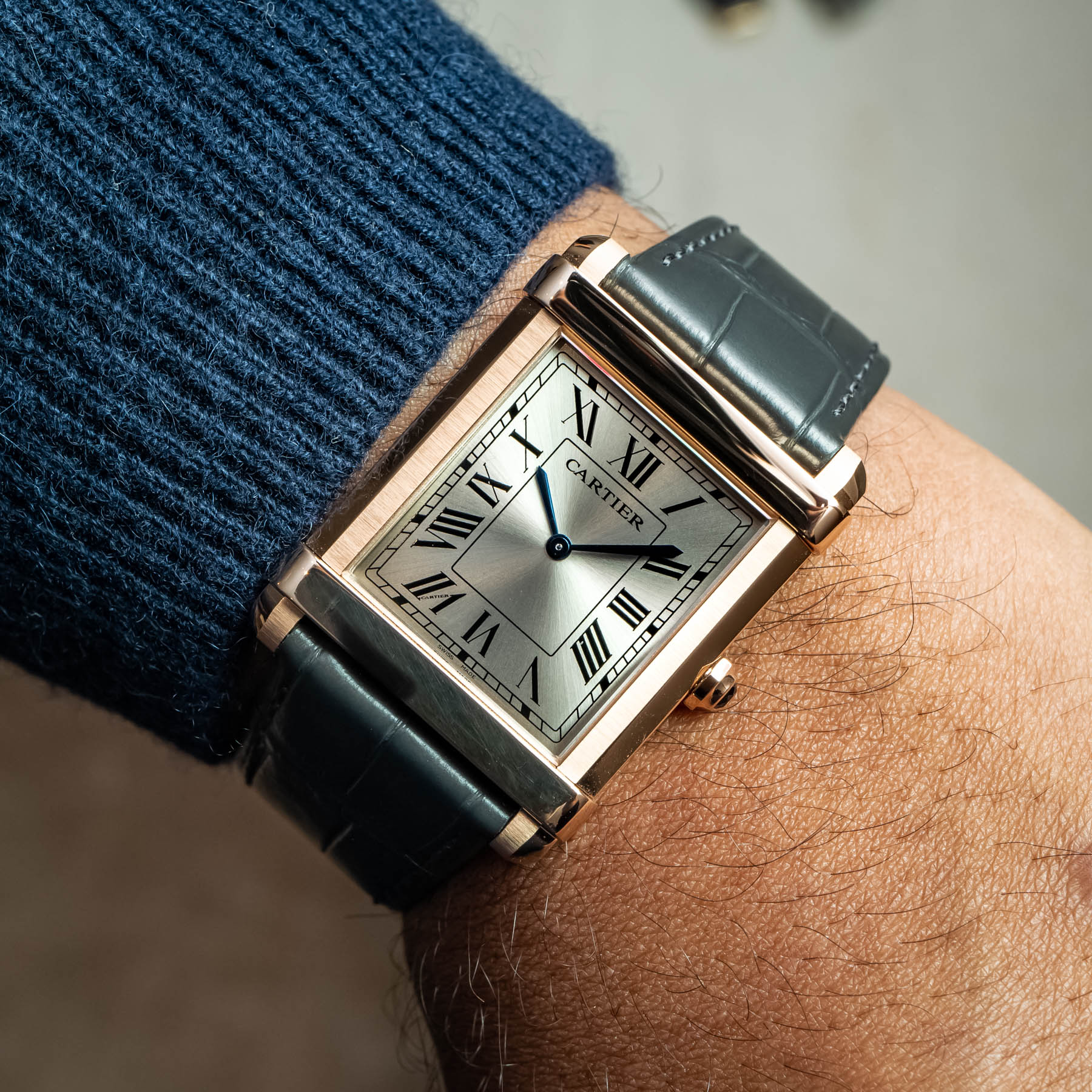 Now, let’s look at the trio of Tank Chinoise with the more classic “standard” dials. Coming in yellow gold, rose gold, and platinum, these each have dial colors that are hued to match the precious metal of their respective cases. You’ll also note that the yellow and rose gold models have blued hands while the platinum model has polished gray steel hands. These three have the traditional sunray-brushed dials with Roman numerals. You’ll notice the contrast between the polished brancards and brushing done on the side bezels, which is significantly more pronounced in the metal. 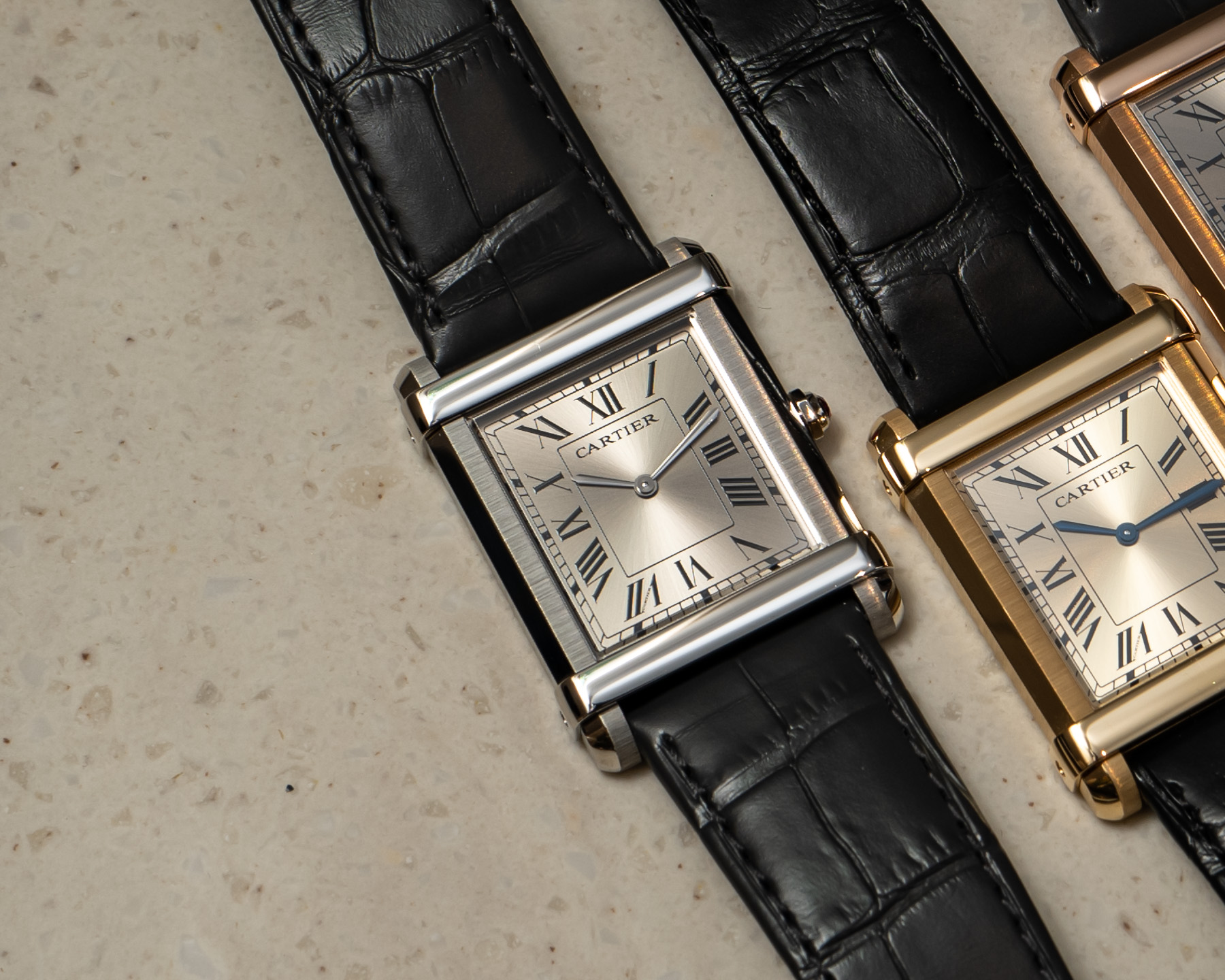 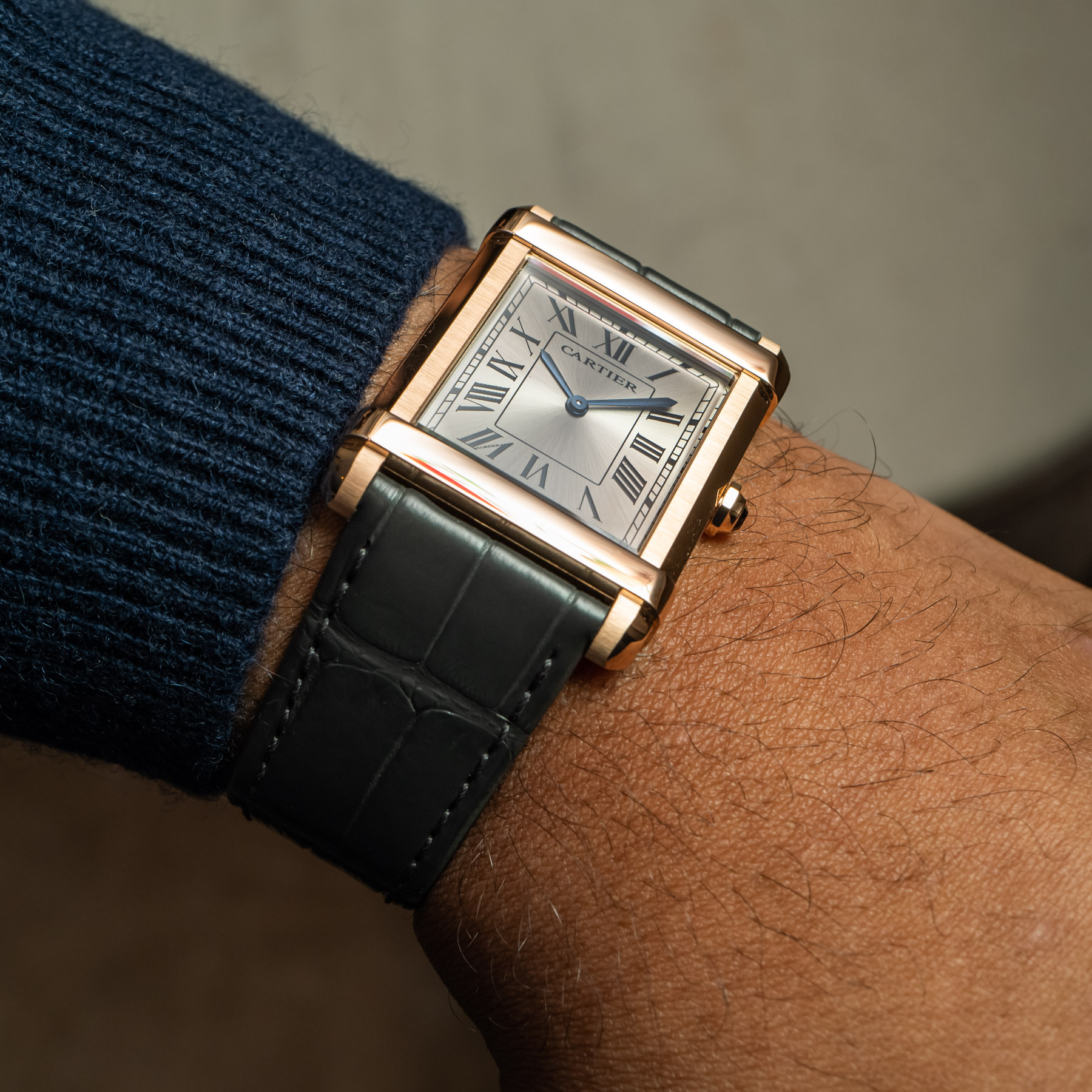 I mentioned the difference in the case sizes of the two models, with each of these three measuring 39.49mm-tall, 29.2mm-wide, and 6.09mm-thick. So, while the case width and height are almost exactly the same, these are about 1.6mm thinner than the open-worked watches. With an enclosed caseback, these watches have the manufacture 430 MC manual-wind movement that we have seen in other Cartier models and is based on the Piaget 430P movement. The 430 MC operates at 21,600 vph and has a 38-hour power reserve. 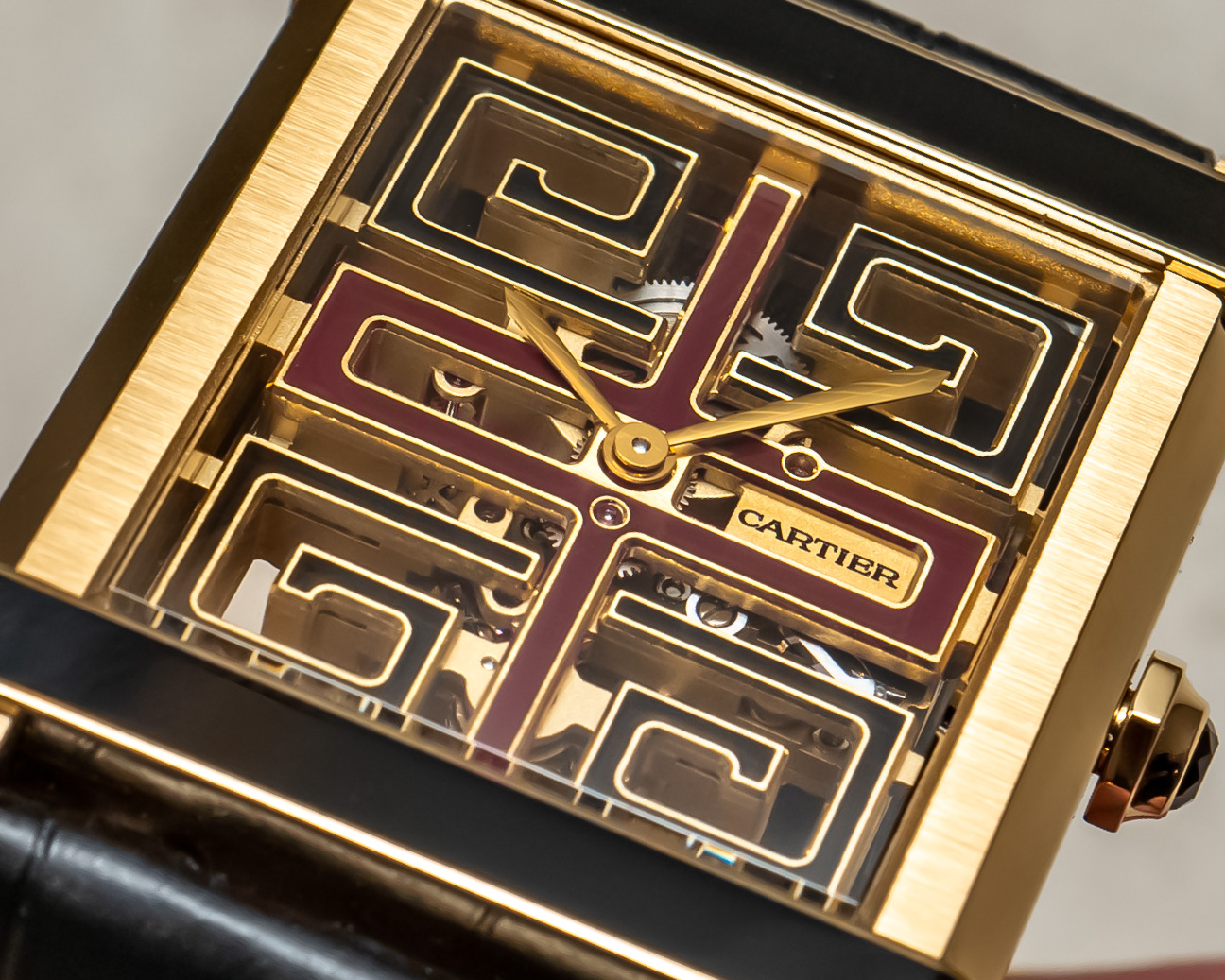 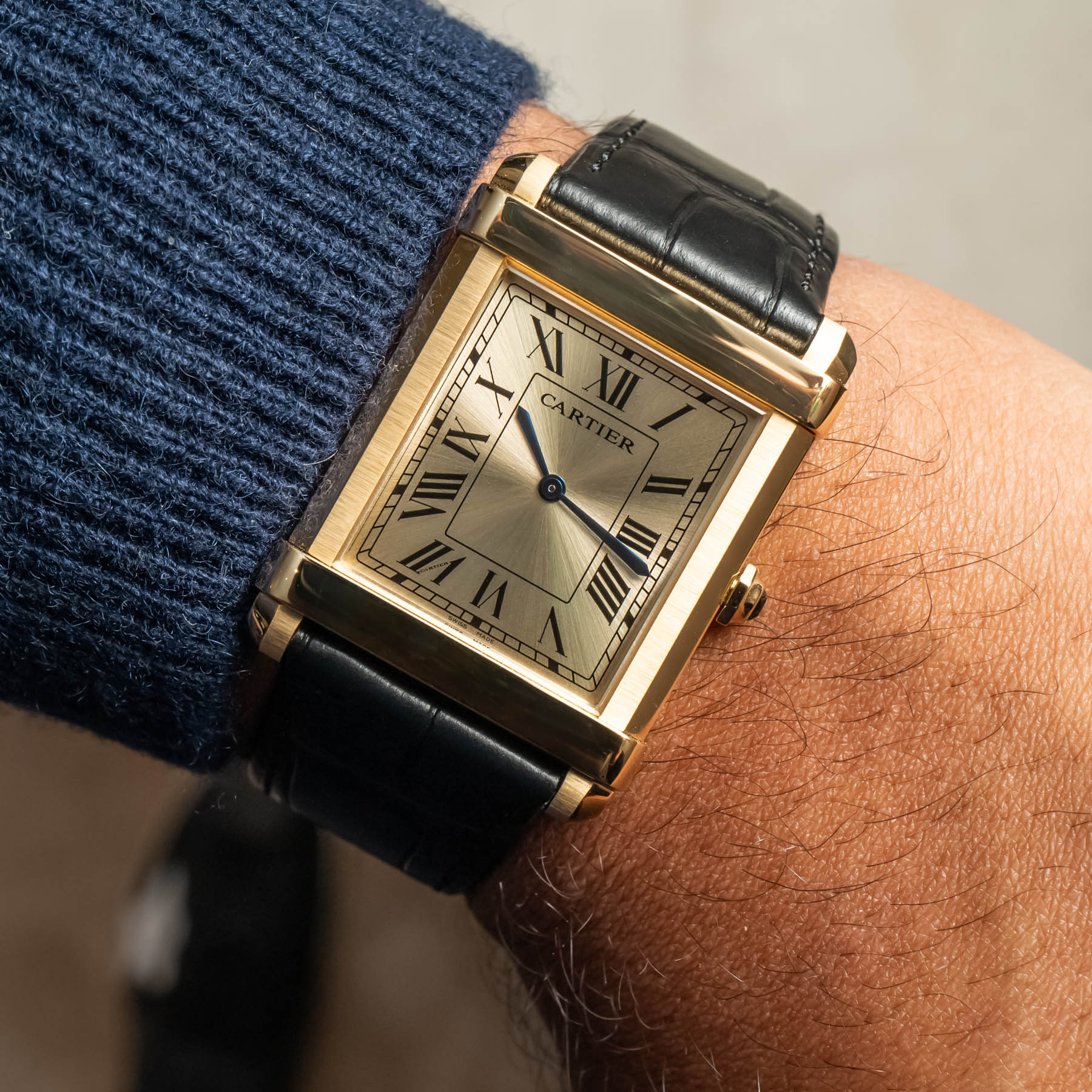 These Cartier Privé Tank Chinoise are a refreshing sight for fans of this overlooked collection, even if they are all limited editions. Well, their limited production numbers and the fact that being part of the Privé collection means these are among the priciest offerings in the brand’s catalog. The trio of more traditional, non-open-worked pieces is limited to 125 pieces in each precious metal. The yellow and rose gold models are each priced at $28,300 and the platinum model is priced at $32,000. The open-worked models are limited to 100 pieces each in either yellow gold priced at $65,500, platinum priced at around the mid-$70,000 figure, and platinum with diamond-set case priced in the mid-$90,000 figure. You can learn more at cartier.com