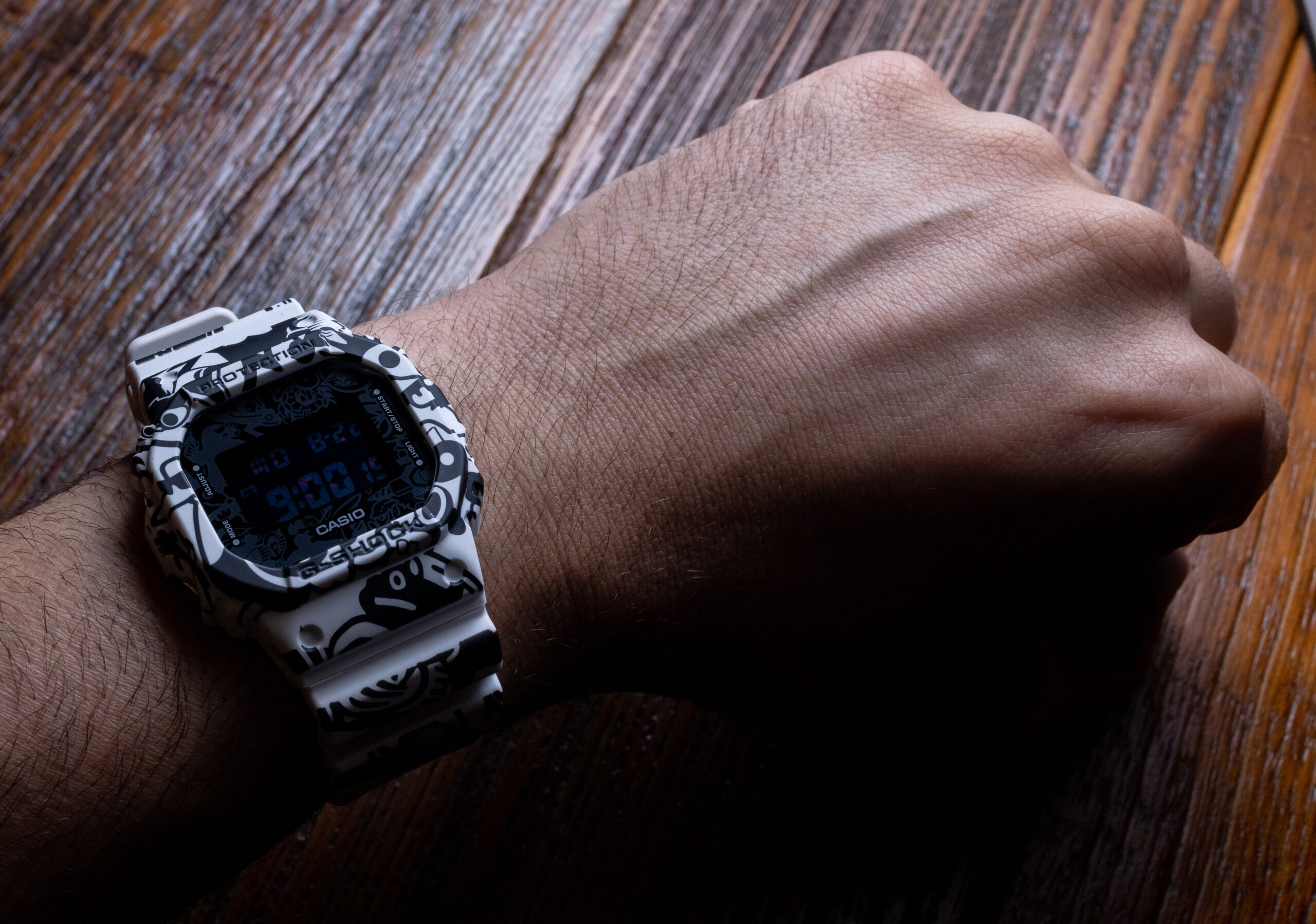 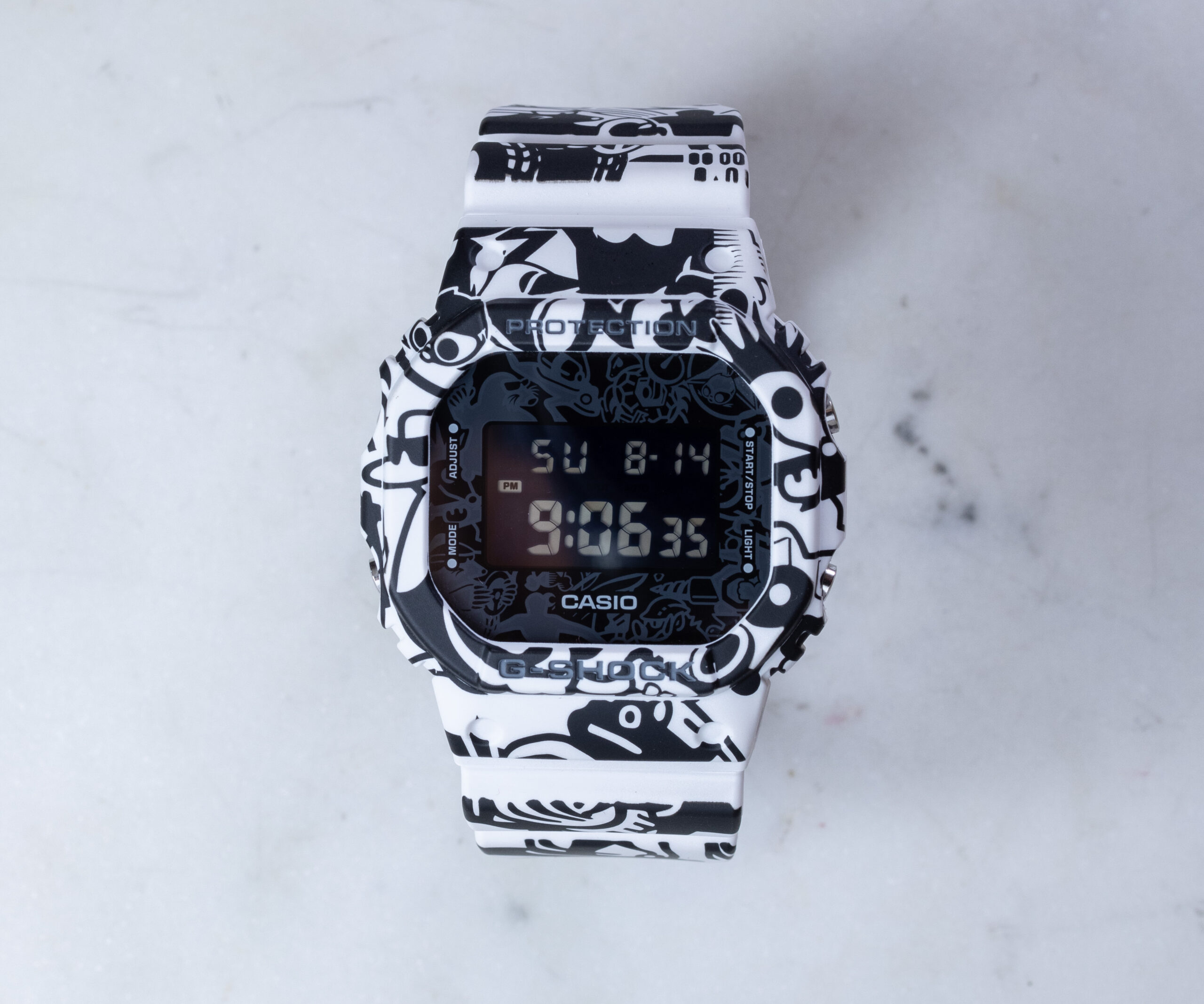 The Casio G-Shock DW5600-GU-7 is a special-edition timepiece for serious G-Shock fans that celebrates an often hidden feature of the “Master of G” watch universe. For a number of years (and still today, at times), Casio would create little characters that would later be engraved onto the casebacks of its most technologically advanced G-Shock products. The characters would symbolize special features — often novel ones — that were a key part of the new G-Shock products – mostly watches from the “Master of G” family or as Casio now calls it the “G-Universe.”

Until now, Casio has developed 18 of these characters, and each of them is presented somewhere on this watch. Casio has never really celebrated this interesting assortment of personalities, and this product is a little nod to the fans, even if the DW5600 model is not one that would normally have a G-Universe character placed on it. The watch begins as a sort of white canvas, and on top of it is printed an artistic mosaic of the characters all over the case and strap, as well as attractively on the bezel around the LCD screen. 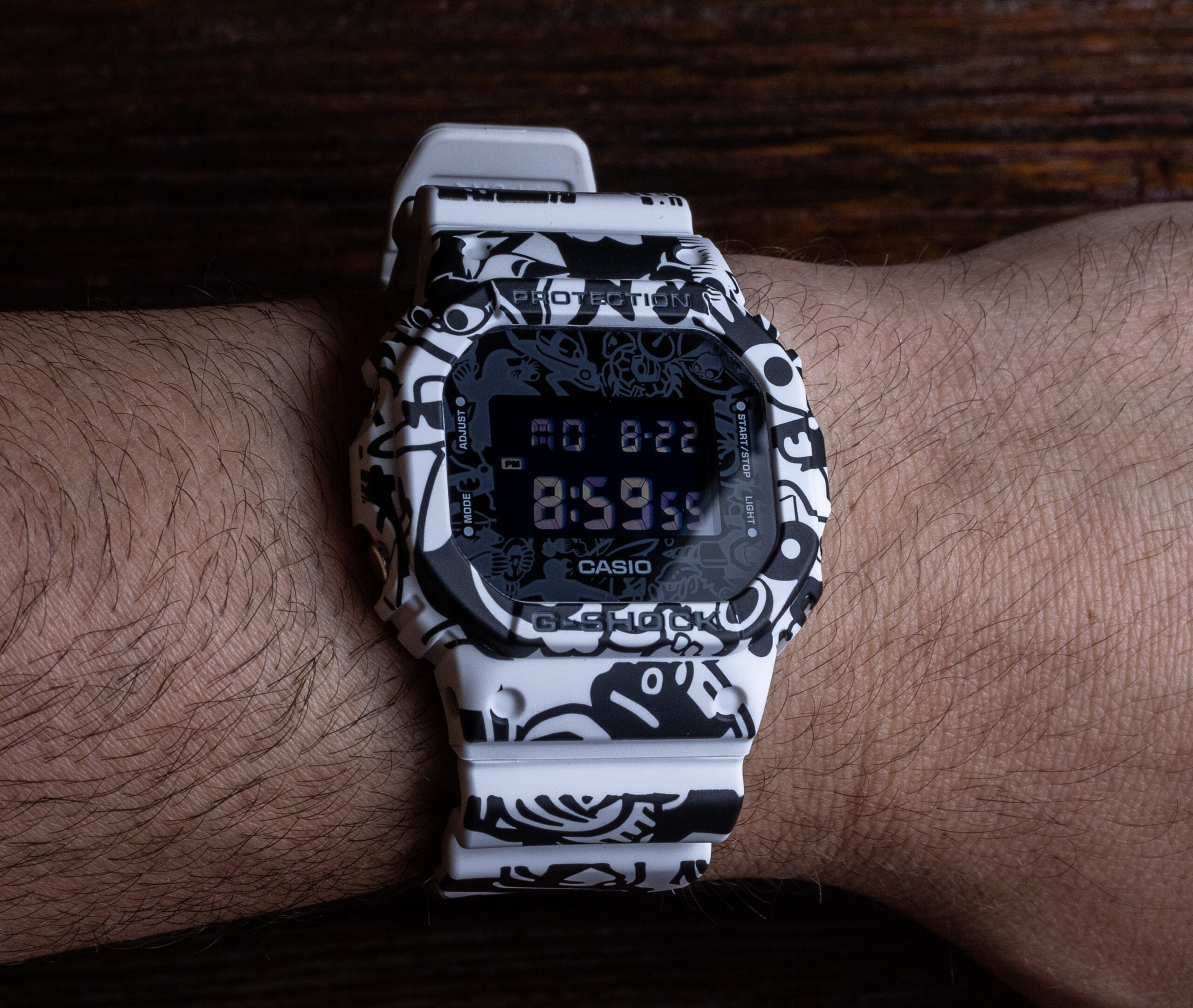 Casio, being a Japanese company, is no stranger to making fun, cute, and communicative characters as part of their brand DNA. So it makes sense that even as a small part of the Master of G Universe, the artistic quality of these characters is high. Accordingly, for years, G-Shock fans have asked Casio to do more with the “G-Shock Man” characters and, to a lesser degree, these G-Universe characters that often get only passing attention. So, making a watch like this is a good start in that direction, and it is really fun to wear from both a brand DNA perspective and as a fashion object.

That said, I feel like Casio could go even further. Why not take this same graphic motif and put it over a selection of three or four actual Master of G watches? Casio could easily make a limited-edition version of a Frogman, Mudman, and Rangeman (just to make a few to start) with this design scheme in order to celebrate these characters. I get that Casio typically prefers to use more “classic” models such as the DW6500 for these fun, more fashion-oriented products, but I hope that changes soon because many G-Shock fans already have so many DW5600 products, and many fewer have all of the Master of G products. I think many people would be interested in special-edition “fashion” versions of more high-end G-Shock models that are in the $300-$800 USD range. 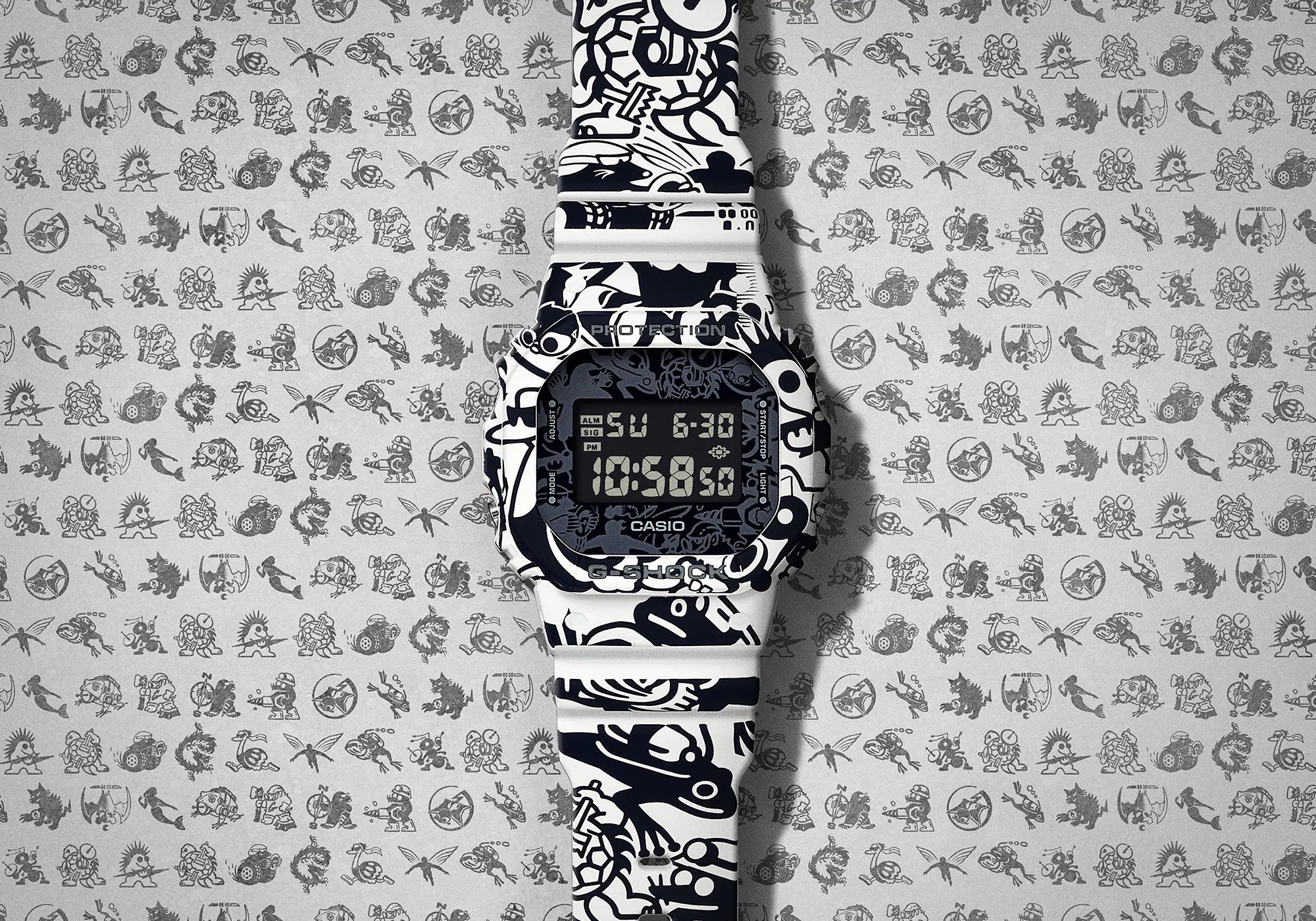 Given its popularity, I won’t go into much detail about the core Casio G-Shock DW600 product that is the base upon which this G-Universe watch is built. The resin and steel watch case is 42.8mm-wide, 13.4mm-thick, and has a 48.9 lug-to-lug distance in a package that has 200 meters of water resistance in a case that weighs just 56 grams. The watch has a Casio-made quartz movement with a number of popular functions and is among Casio’s best-selling products. 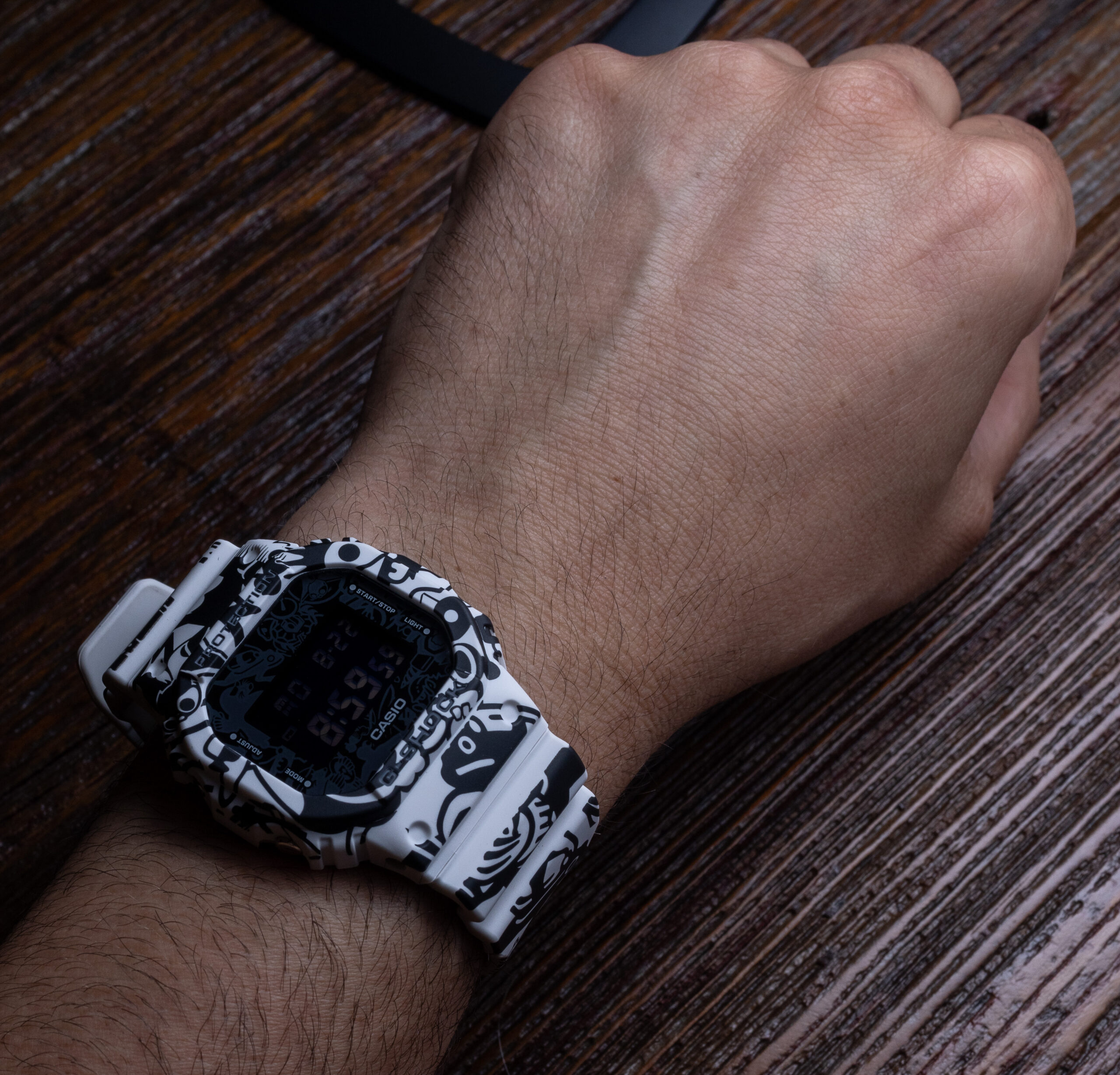 Even though I am a G-Shock fan, I don’t have enough knowledge to name all of the Master of G characters (they don’t actually all have distinct names) or recall what watches they are from. I certainly don’t recall what features they all imply. Unfortunately, the watch packaging doesn’t help much in this department but the good news is that the Internet can help. I found that on the Casio website the product listing page for the DW5600-GU-7 not only has animated versions of the characters but also what watches they are associated with and what function they represent. So, you can click on the link below and see what that version of the Rangeman or the Frogman means, as well as some of the less-common G-Universe characters such as Antman, Lungman, Raysman, and Gaussman. It is a fun watch for sure, and I hope Casio continues to celebrate these fun characters with more products in the future. Retail price for the Casio G-Shock DW5600-GU-7 watch is $140 USD. Learn more at the Casio watch website here.