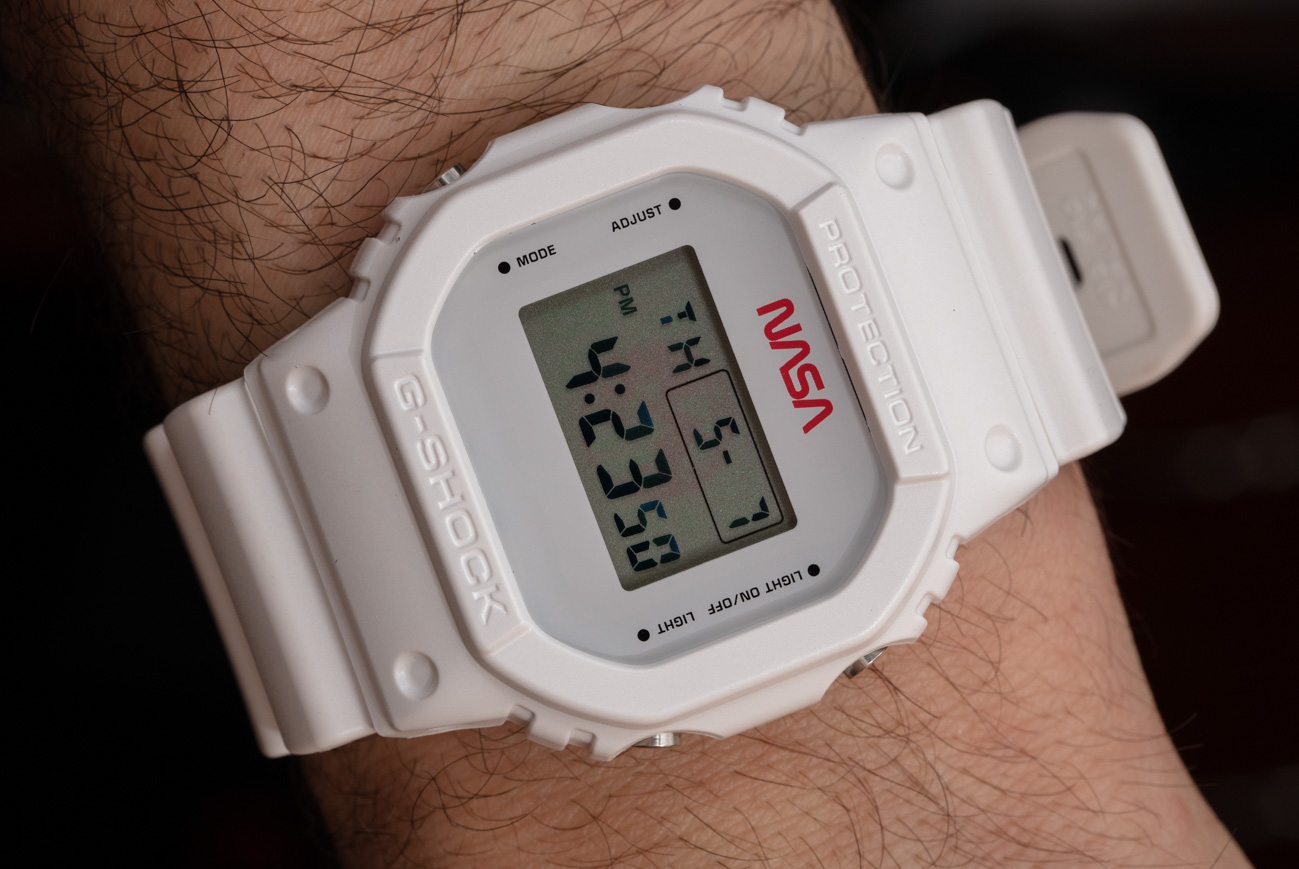 It might be a simple thing, but putting the NASA logo on an all matte-finished Casio G-Shock DW5600 collection watch has proven to be very satisfying. Casio is already out of stock on the first batch of these reference DW5600NASA20 watches and limited the sale of them to one per household. America’s National Aeronautics & Science Administration (NASA) is a highlight of America’s culture of innovation — and its inspiration is perhaps needed today more than ever in a world where exploring innovative solutions to major challenges isn’t just folly, but fundamental to our survival. The watch also happens to look quite cool. 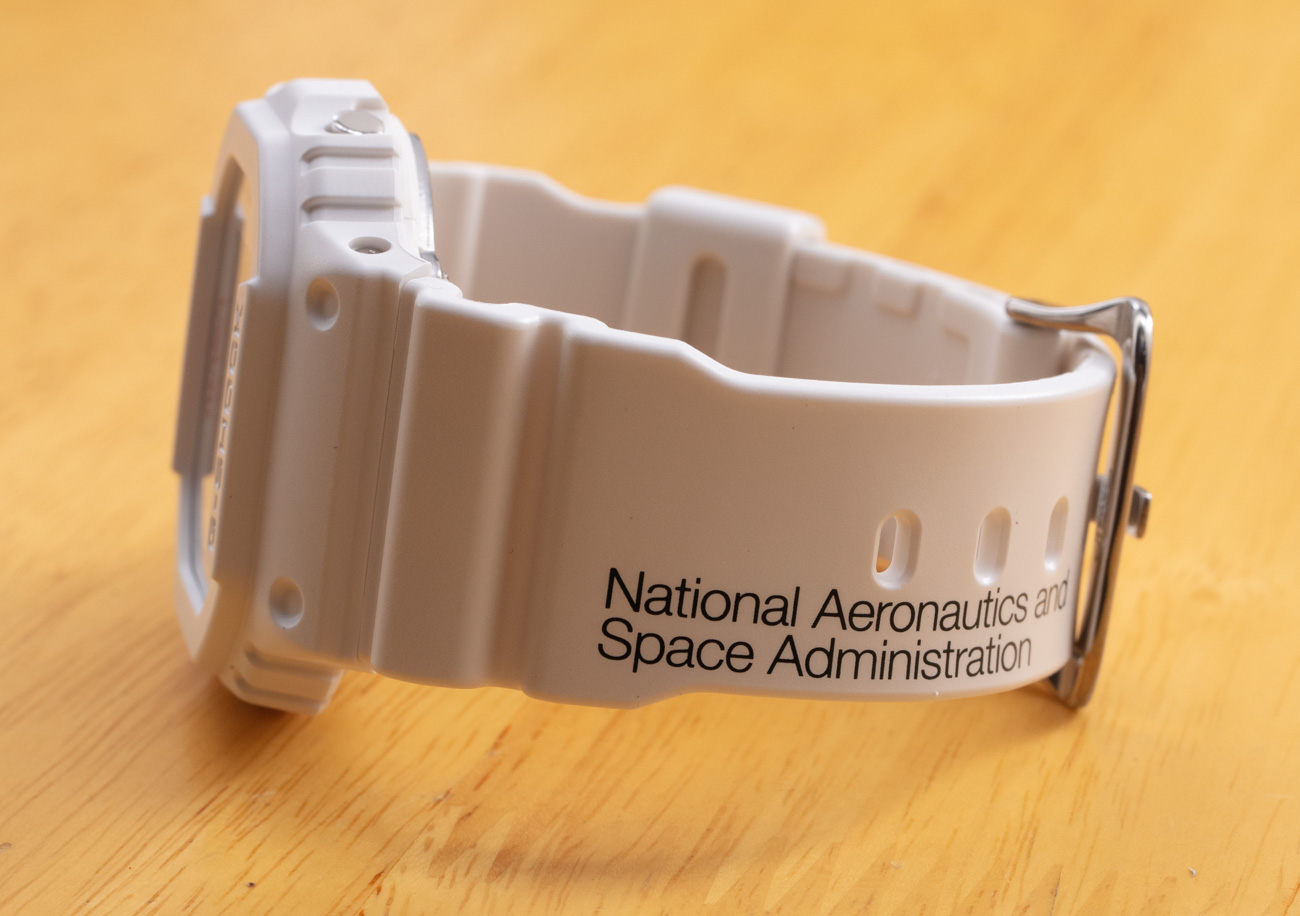 My only chagrin is that Casio is still hesitant to use its more contemporary timepieces as the base for these lovely limited or special-edition watches, such as those with Bluetooth connectivity and special materials. The DW5600 is extremely affordable, but when you become accustomed to wearing some of the newer G-Shocks with their advanced materials and features, it can be hard to go back in time and strap on something a bit more retro (albeit still very satisfying). That is my friendly nudge to our friends in Japan that the next Casio G-Shock NASA watch might be based on a newer-generation product collection.

Given the collectible nature of this DW5600 NASA watch, I am concerned about giving it too much wrist time, as even Casio will admit its matte white cases are those that will show wear the fastest – because white looks its best when blemish-free! The clean design of the DW5600NASA20 strips away as much text as possible from the watch dial itself, and uses the underlying DW5600 platform as a palette for the attractive NASA messaging. In addition to the NASA logo on the face, the watch has a unique “Earth” motif as the backlight graphic, which is also echoed on the caseback of the watch as the engraving on the steel back. The strap is also printed with the full name of NASA, as well as an image of the American flag on the strap loop. 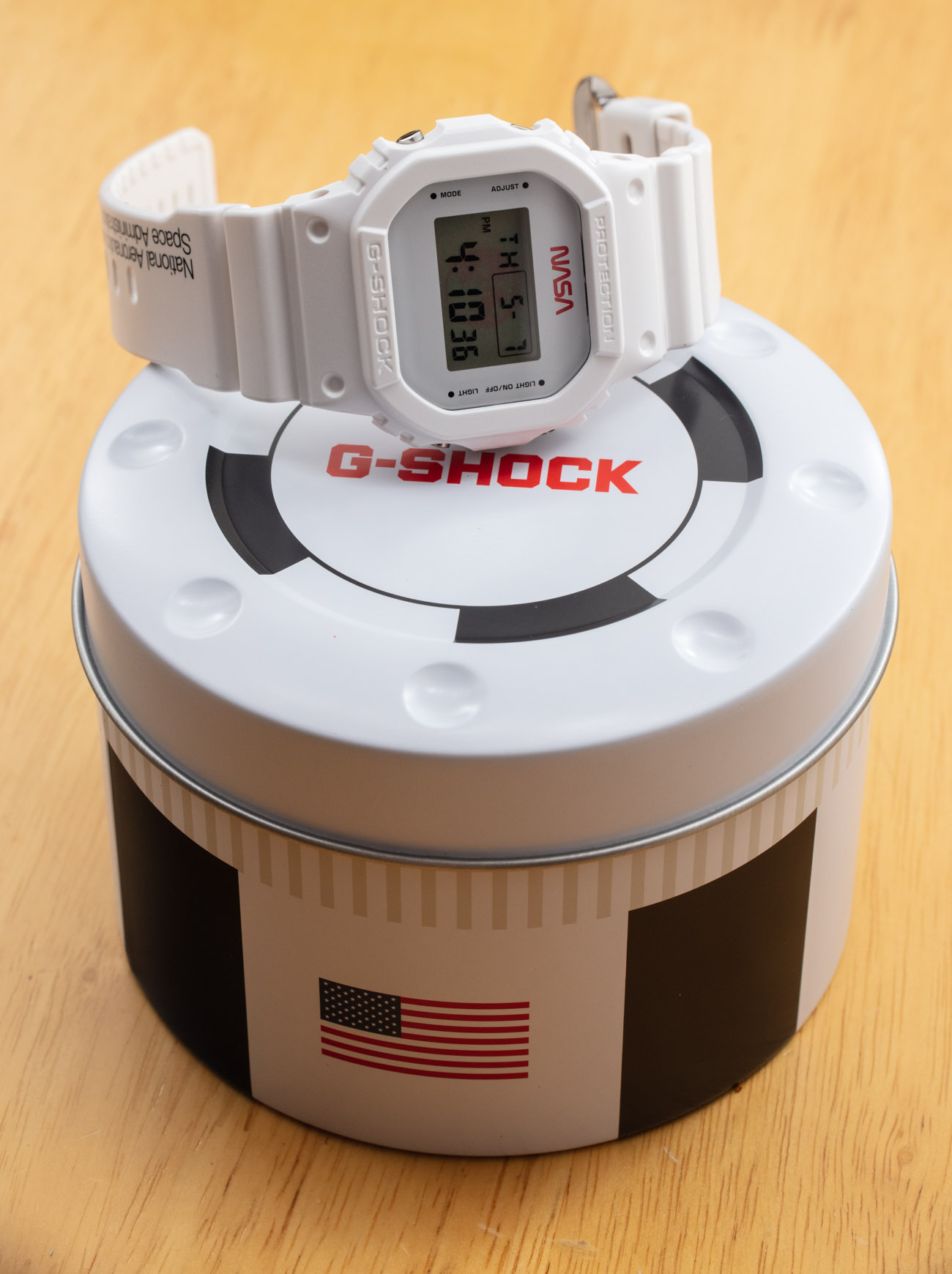 With legendary durability, the DW5600 and other G-Shock watches make for stylish, daily-wear watches that can easily put up with whatever life throws at them. These would also be entirely suitable for actual astronaut duty. No doubt G-Shocks are already worn by plenty of people at NASA, which, in my opinion, makes these products even more “legitimate.” So, even though this is a licensed product, I can wear it and imagine that if a NASA astronaut needed something to wear while hanging out in the International Space Station, something like this Casio DW5600 would be very fitting.

According to Casio, the reason for the NASA watch project was to page homage to NASA’s decades of space exploration. These days, the NASA name is being supplemented with others in the same space (no pun intended), such as SpaceX (even though the two organizations work together). NASA will nevertheless long have an emotional connection with consumers around the world who relate to the dream of reaching new heights, and the accomplishment that comes with the highly engineered approach to problem solving and technology that NASA was instrumental in developing. 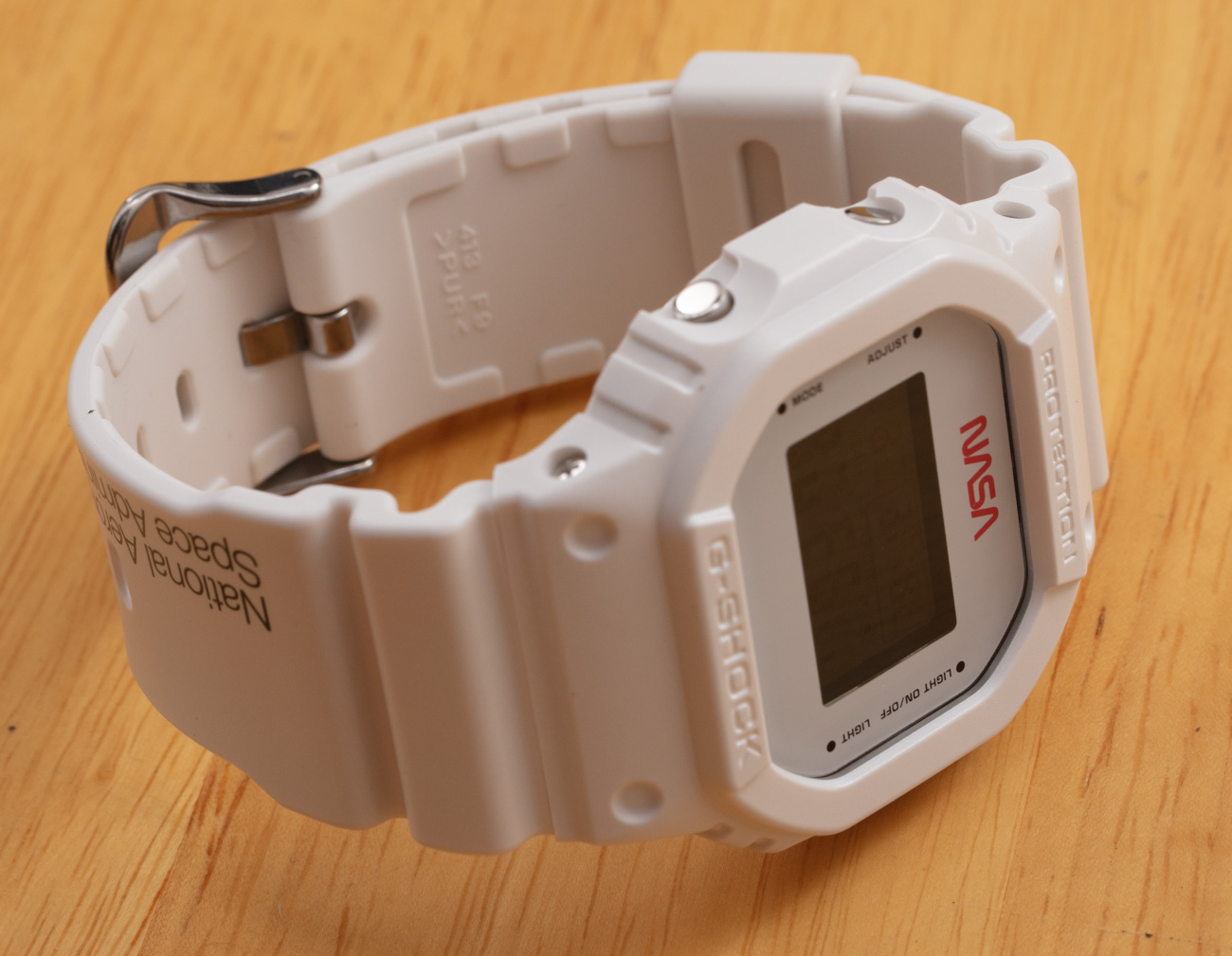 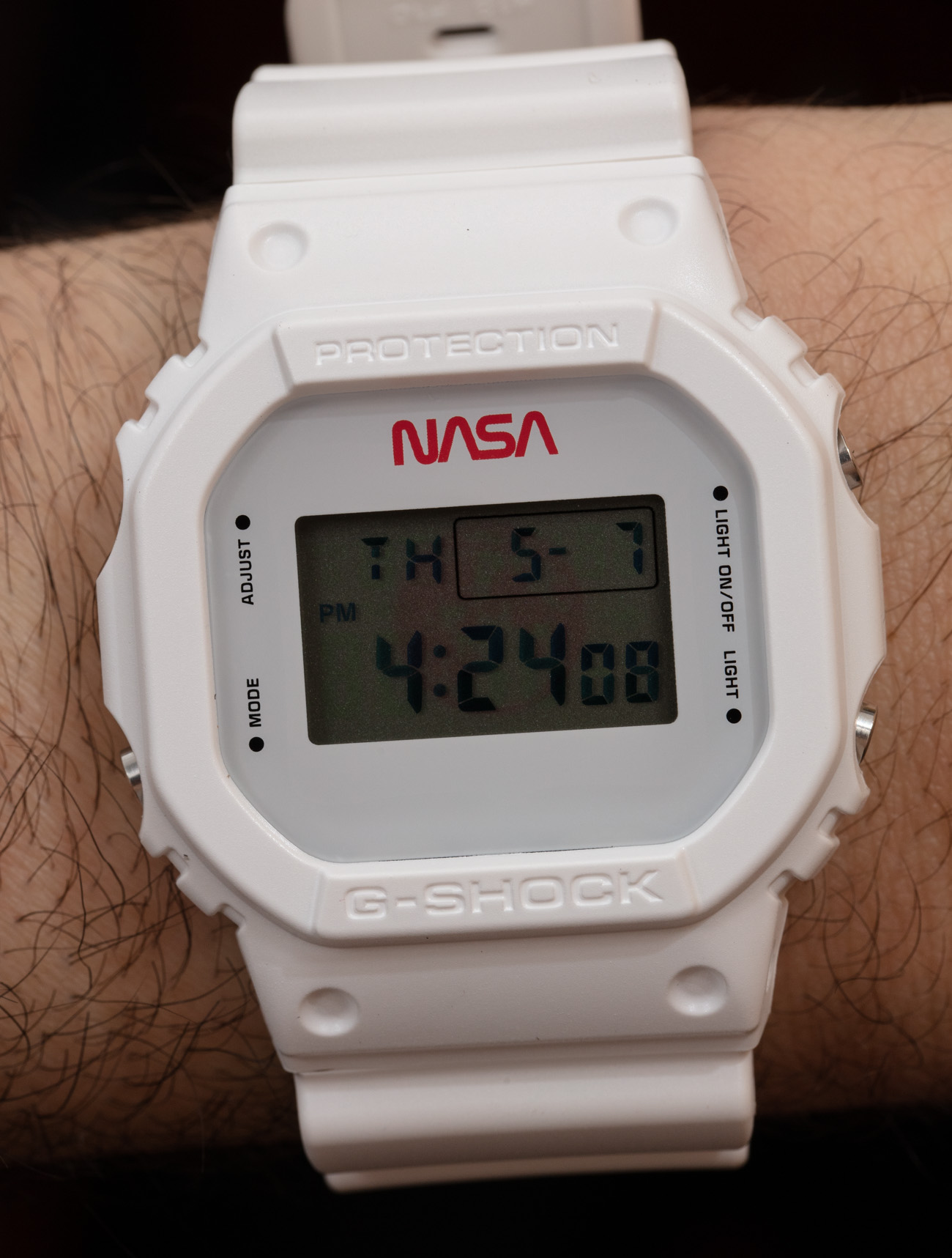 For those not already familiar with the Casio G-Shock DW5600 family, it is a core G-Shock design whose origins go back to the mid-1980s. Today, the watch is about 43mm-wide, 13.4mm-thick, and has a roughly 49mm lug-to-lug distance. The case has water resistance to 200 meters and is lightweight and comfortable on the wrist, being produced from Casio “resin,” along with metal parts and componentry. Inside the watch is a Casio module 3229 quartz digital movement that has a litany of regular features, such as the time, stopwatch, countdown timer, and calendar.

The DW5600 has more modern analogs in the Casio family but is still a design icon that continues to be among the best entry-level timepieces that money can buy. This particular NASA limited edition is just a fun flavor of an already good series. Price for the Casio G-Shock NASA reference DW5600NASA20 is $130 USD. Learn more at the Casio G-Shock website here.