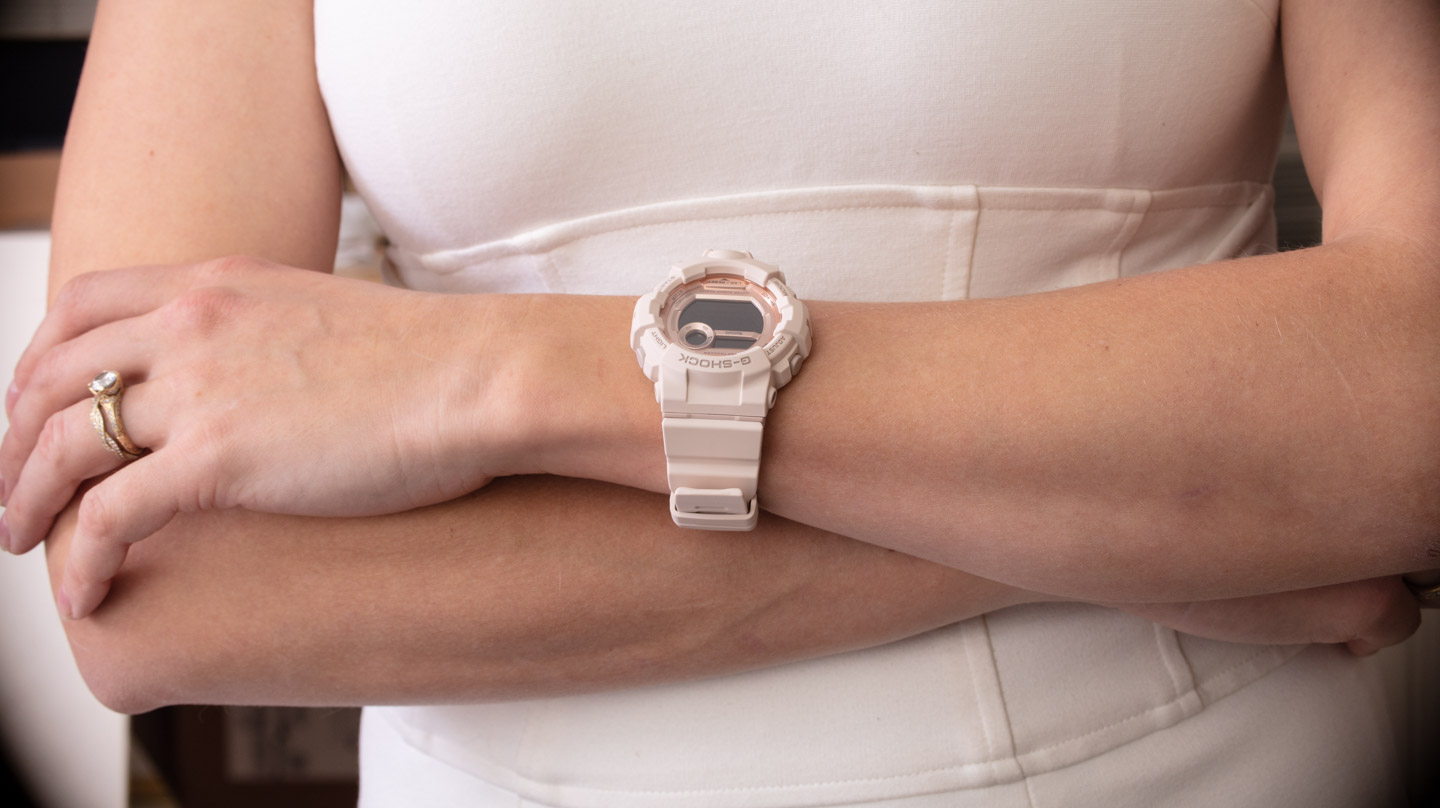 Recently, Casio introduced a new collection of women’s watches that I see as being a more mature version of the popular Casio Baby-G watch family. Casio G-Shock watches have, for the most part, been entirely masculine watches — with pretty big sizes to match. The Baby-G was supposed to be the all-purpose women’s line of G-Shock timepieces when they were first introduced, but they never really got out of their cutesy, girlish outfit. That suits a lot of women well, but Casio was missing a more mature women’s watch product that was sold to people who wanted the adult G-Shock watch experience. G-Shock Women is the answer to this, and today I compare a newer Casio G-Shock GMDB800-4 watch with the older but similar in functionality and price Baby-G BG169G-7B. 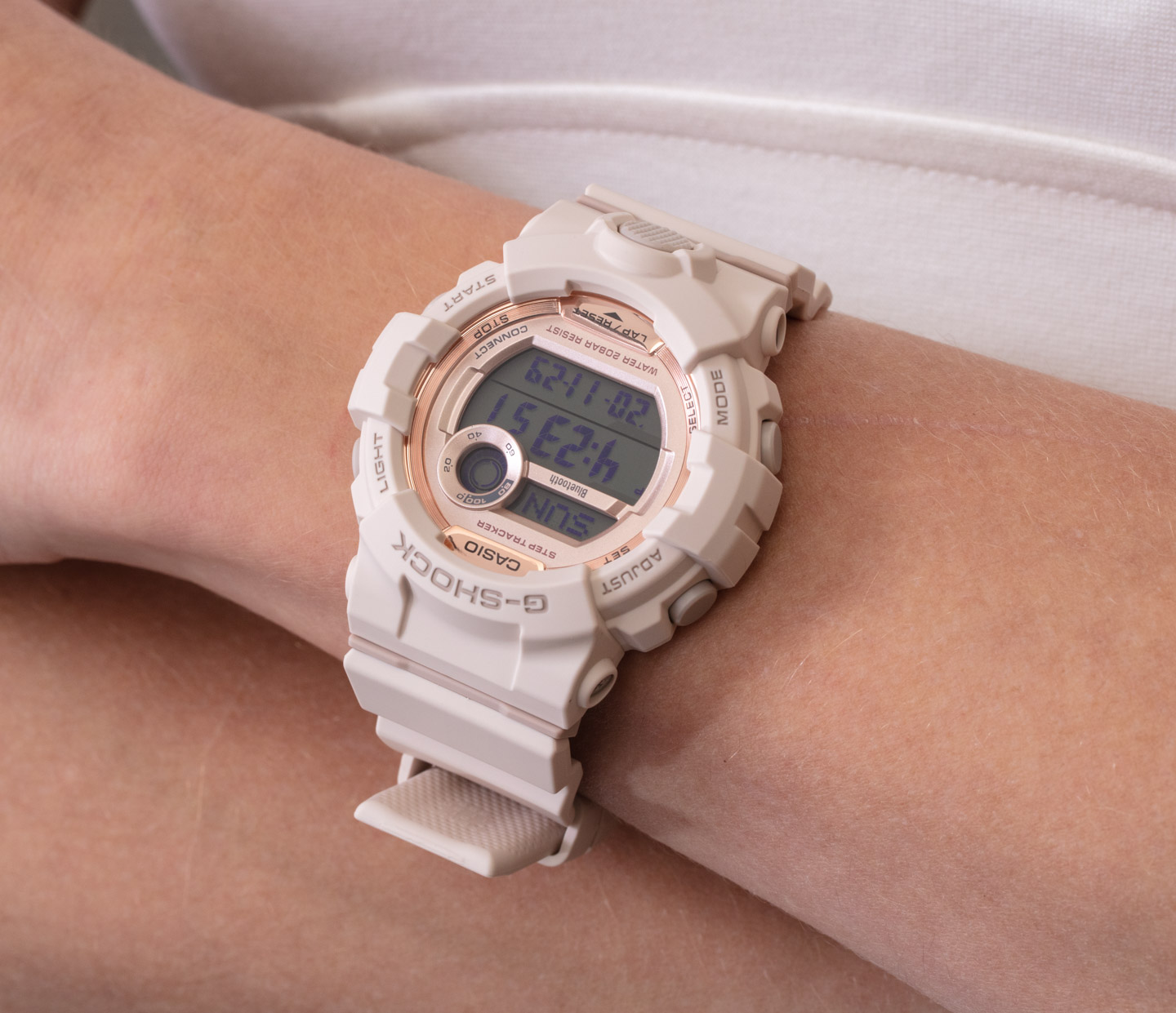 Make no mistake that the G-Shock Women is the more modern of the two products. First, it features a design that is a sized-down version of a look that is popular among several G-Shock men’s watches. In fact, the GMDB800 for women is a 3mm-wide smaller analog to the G-Shock GBD-800 watch that is also currently for sale — and they cost the same, too. So, in effect, it is possible to have his and hers options for couples who are into that type of G-Shock experience. 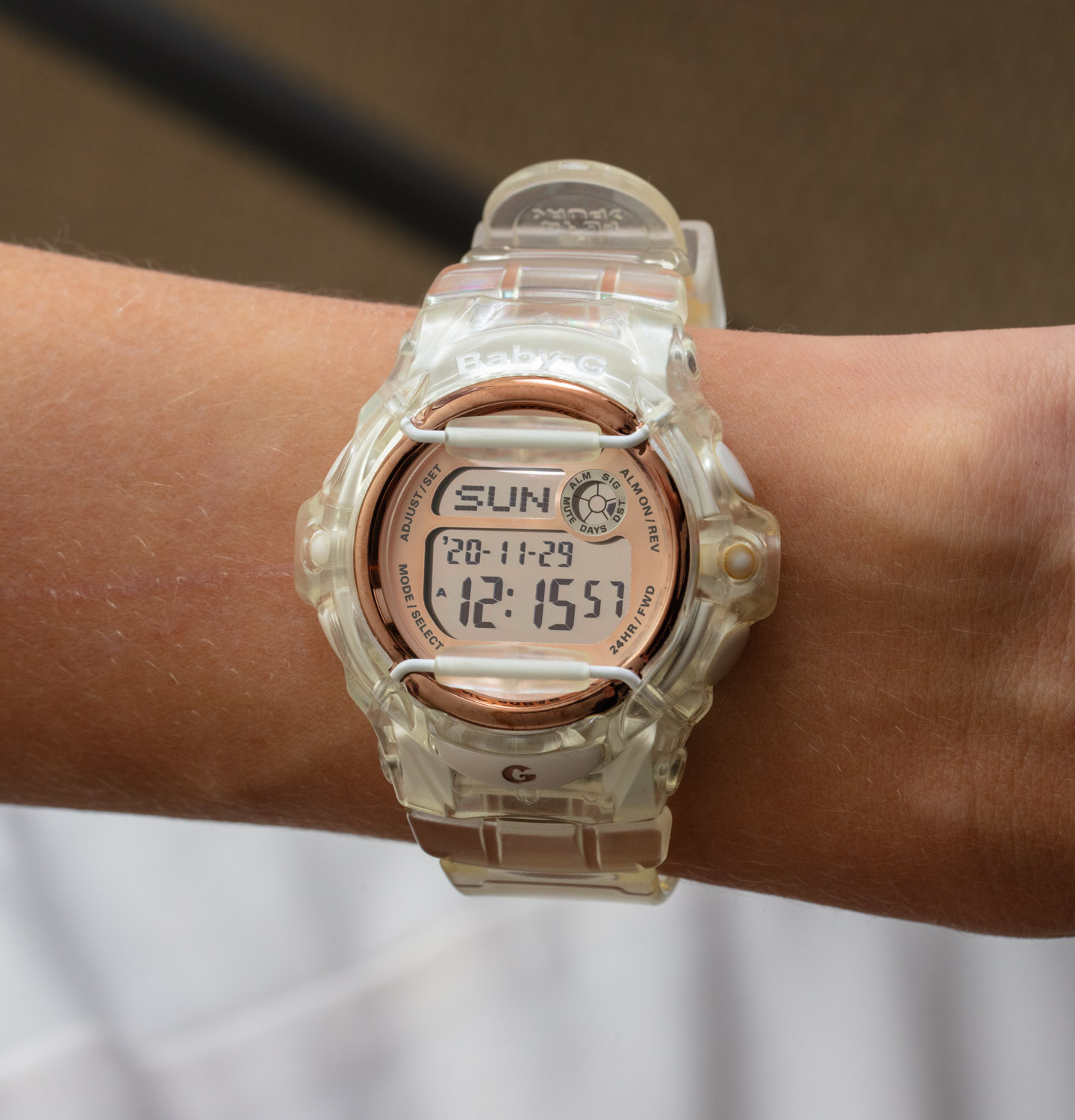 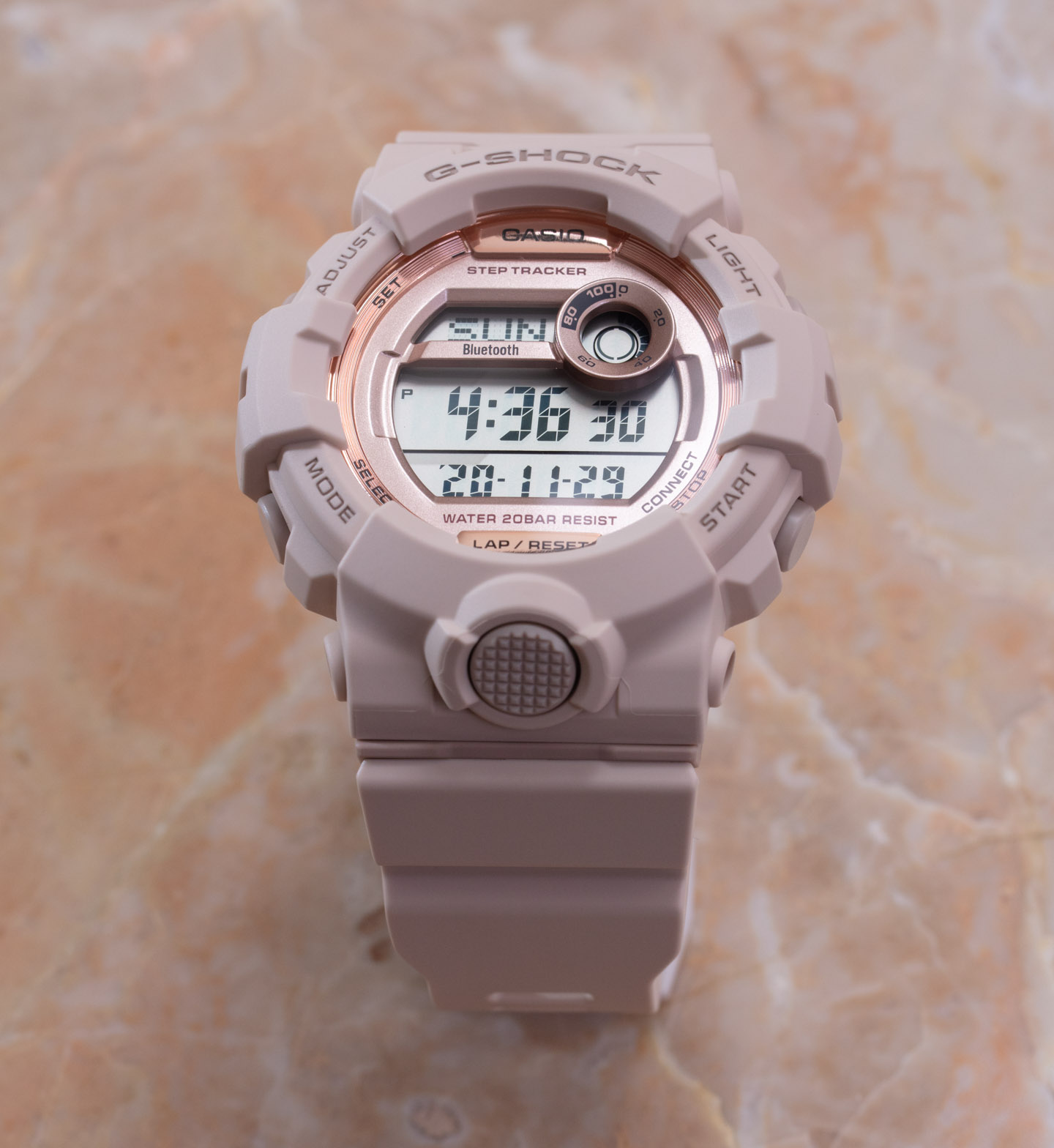 This particular Casio GMDB800 is the powder pink-colored reference GMDB800-4, with a rose-gold-toned screen bezel. It is among the newer generation of G-Shock models that includes both Bluetooth connectivity for pairing with a phone (quite useful actually), as well as a step counter for an interesting on-board form of activity tracker. Casio is specifically promoting the watch as a sort of combination of traditional G-Shock (for women) as well as an exercise device. The GMDB-800 isn’t a full-on activity tracker in the way an Apple Watch is, but it does combine with your smartphone’s other functionality and Casio’s G-SHOCK Connected app to create daily fitness goals and to track your healthy activity.

The best use of the G-Shock app, in my opinion, is more simple than that. First, the app makes it easy to automatically adjust the time for when you are traveling or during daylight saving time. Second, the app makes it a breeze to operate most of the watch’s range of features such as setting alarms or creating workout interval timers. This is all doable on the watch itself, but admittedly more convenient to adjust and set on your phone through an app. 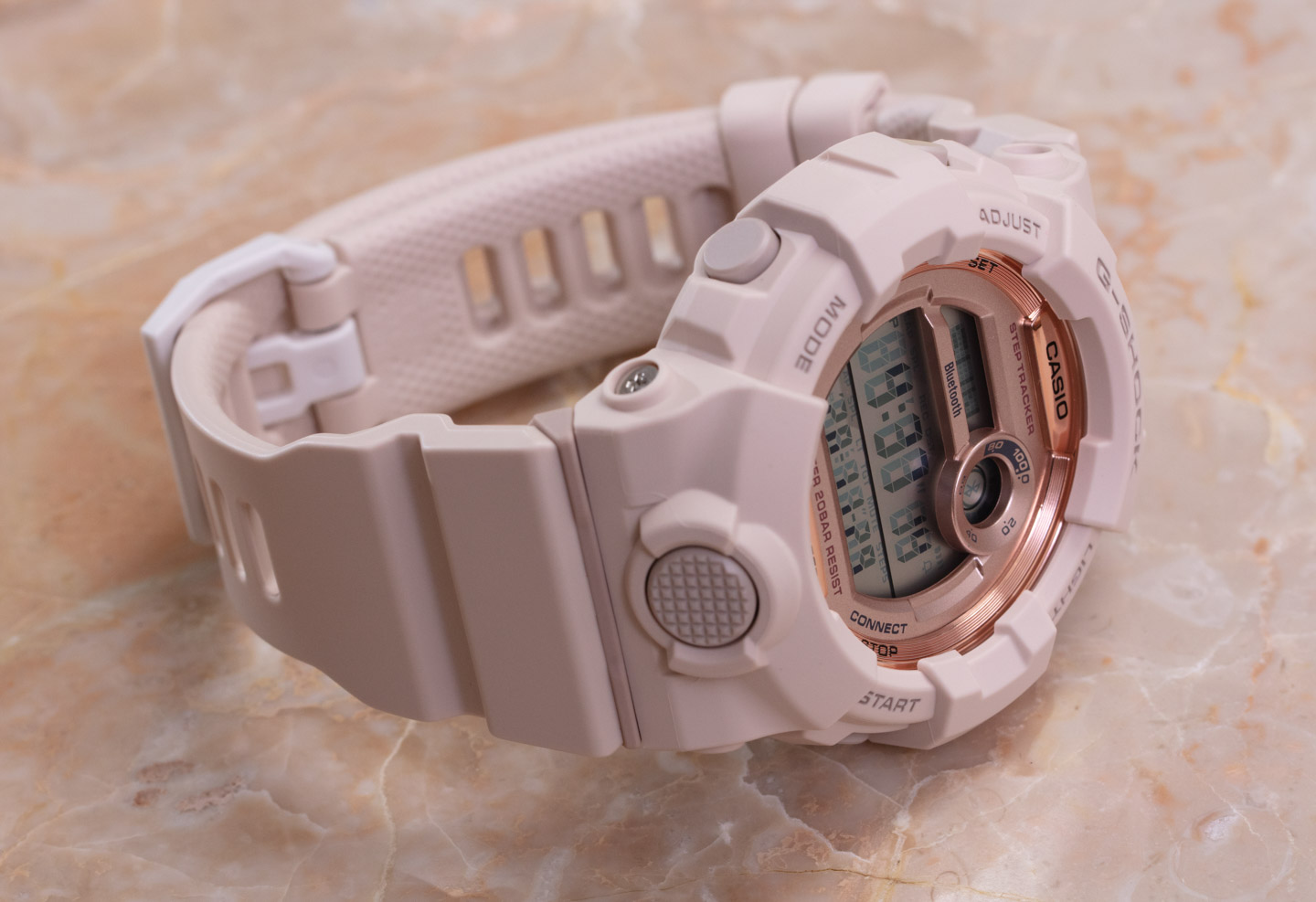 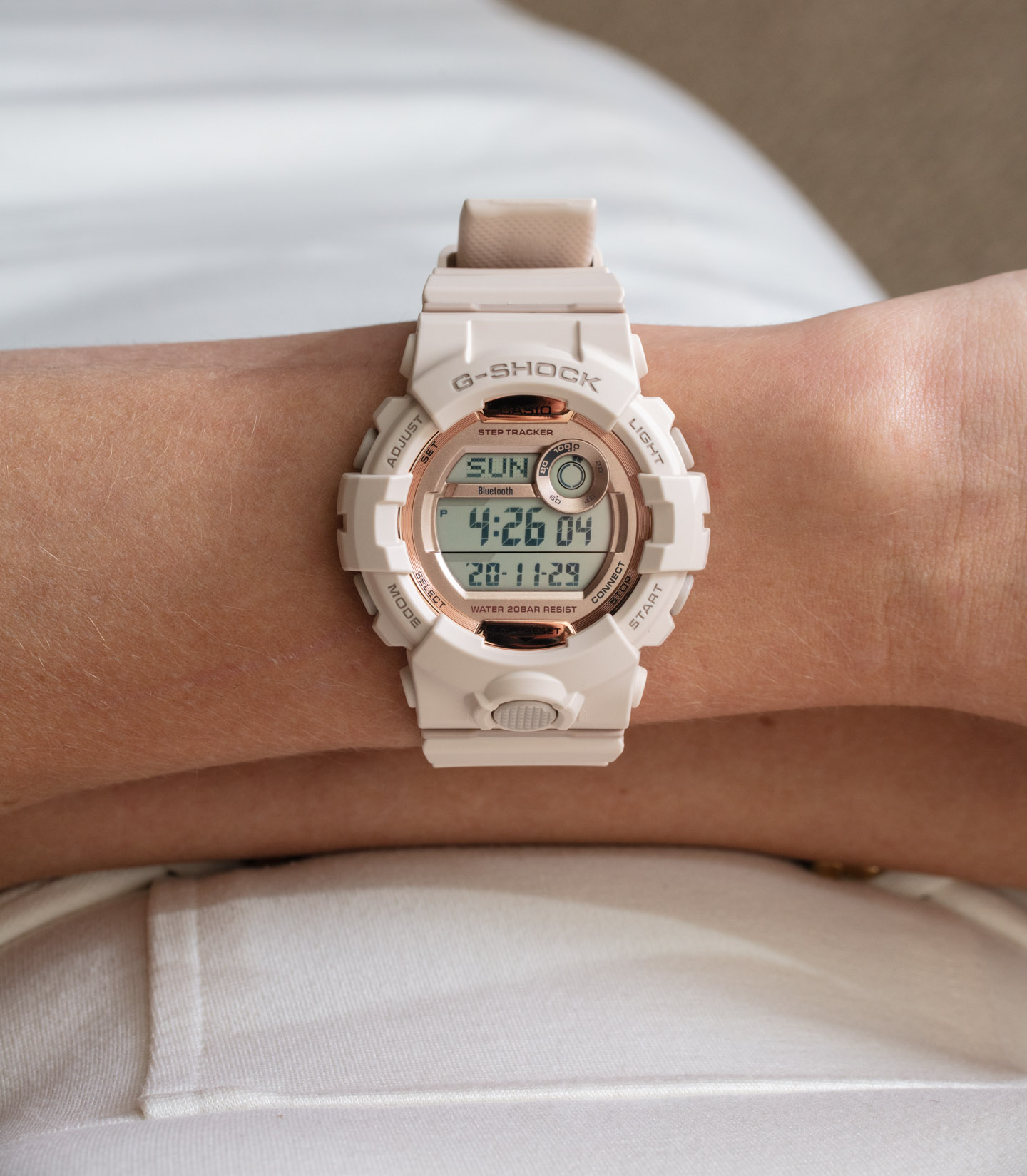 This G-Shock is not solar-powered, meaning it will require a battery change every two years or so (depending on usage). The 200-meter water-resistant case is about 45mm-wide and about 50mm-long. That means it would wear a bit small for a man, and on the large (but in a typical and welcome G-Shock way) side when on most women’s wrists. It is very light at just 52 grams. Price for the Casio G-Shock Women GMDB800-4 watch is $99 USD.

Next up and for comparison purposes is the Casio Baby-G BG169G-7B. It also has a rose-gold case bezel but a more traditional G-Shock wearing experience and a smaller case. This is among the more recent models of a legacy watch design and shows how hip the series can be. There is the 1980s-reminiscent screen protector (which is removable) over the dial, and the case is also mostly transparent, offering a nice effect. Though the inner case is white, so you don’t get the interesting sensation of seeing the “guts” of the Japanese quartz Casio movement. 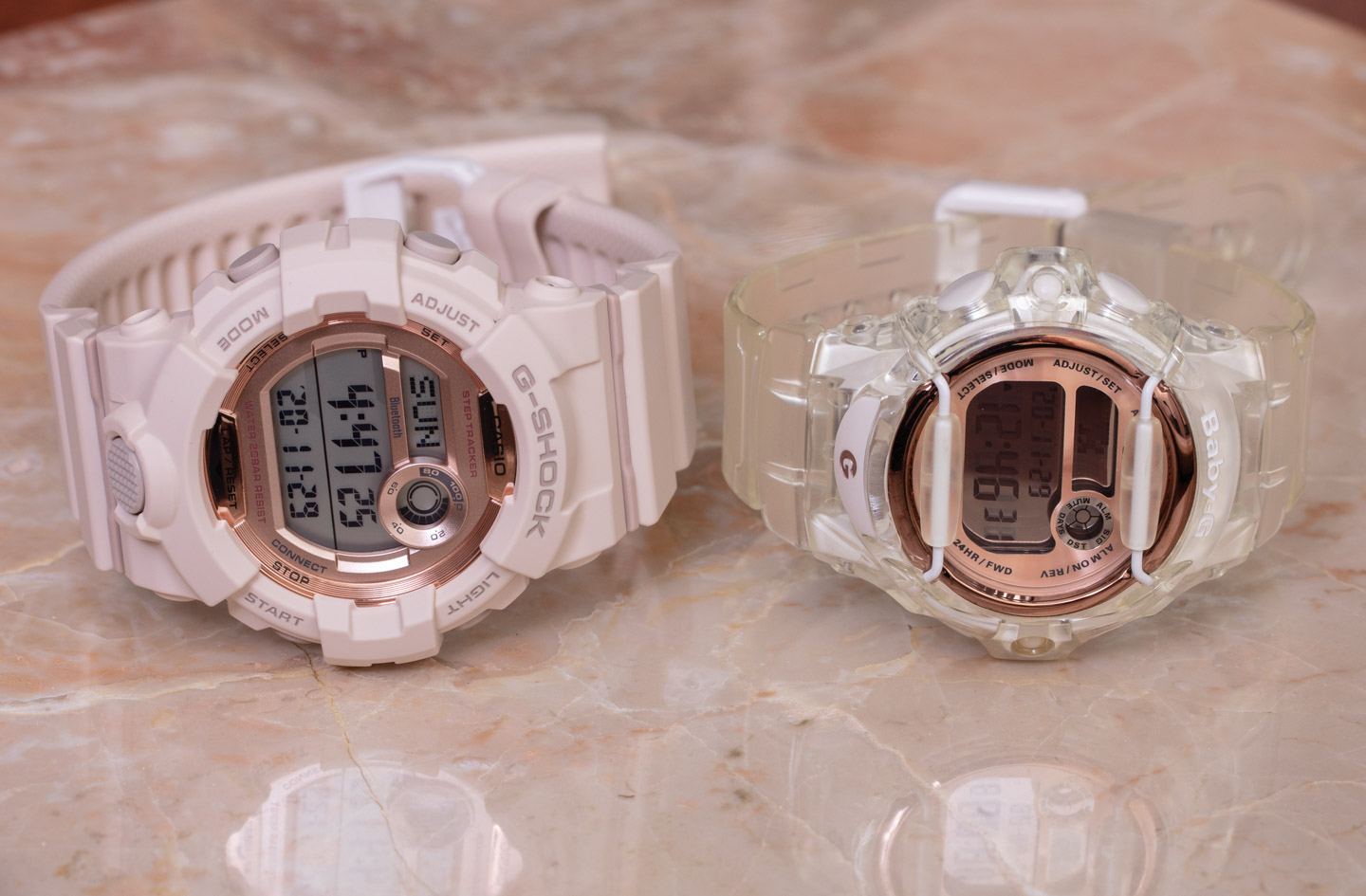 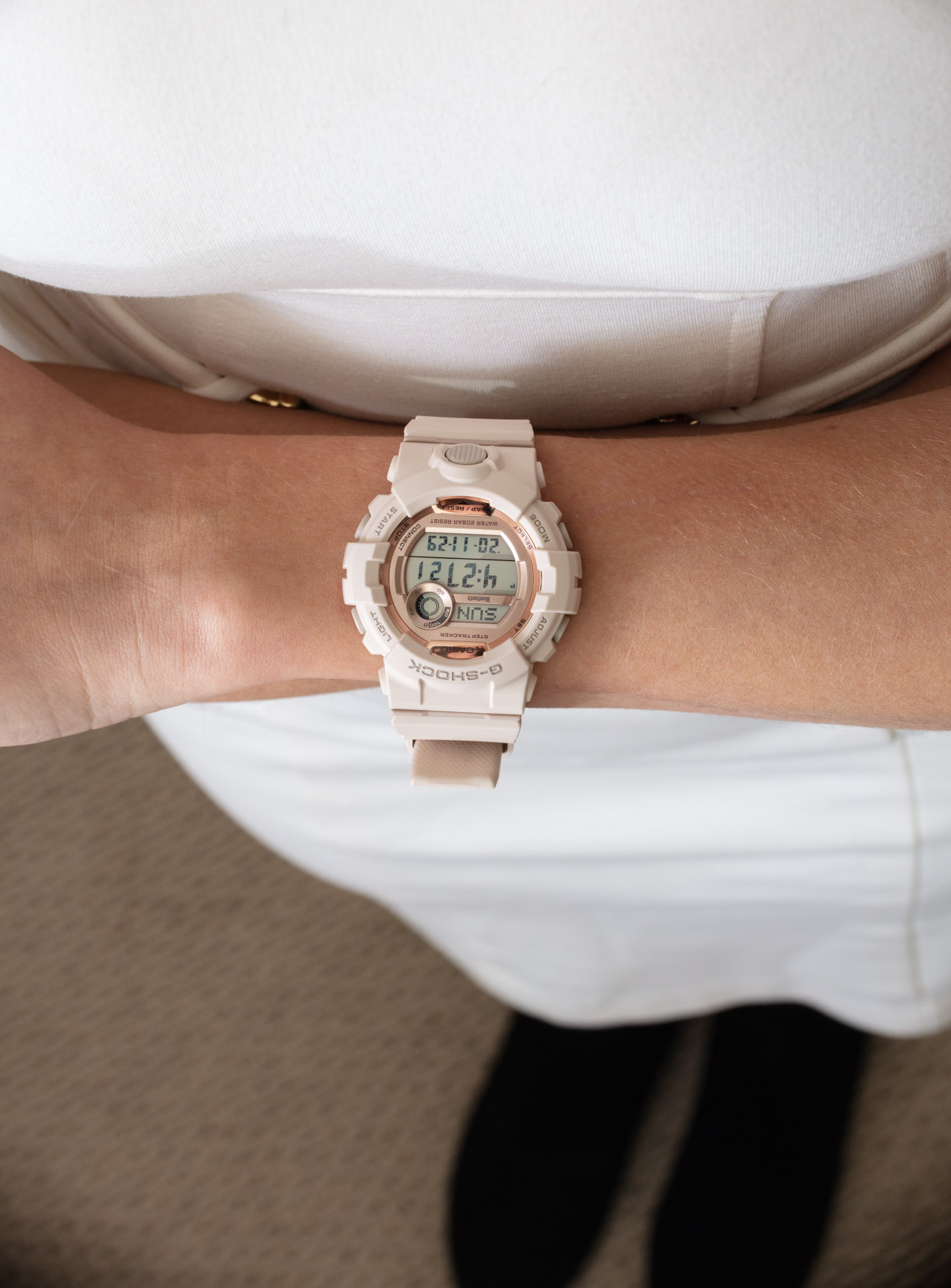 The Baby-G is also water-resistant to 200 meters but compared to the newer watch above is more G-Shock pint-sized at 42.6mmwide and 45.9mm lug-to-lug. The watch weighs 45.3 grams. Don’t miss the neat mirror effect of the screen behind the text, and the fact that an animated cat pops up every once in a while. Price for the Casio Baby-G BG169G-7B is $89 USD. Learn more or order at the Casio website here.