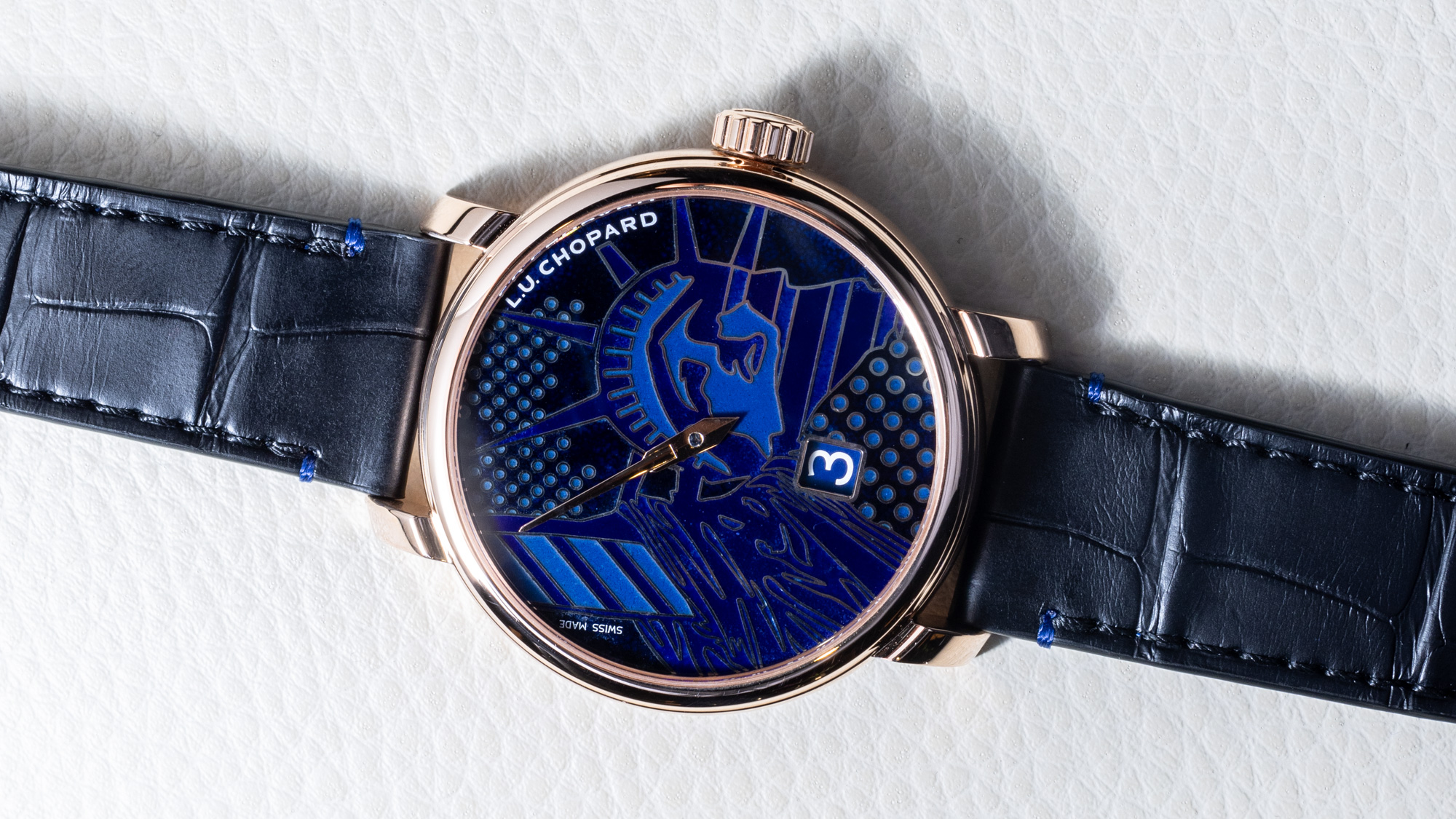 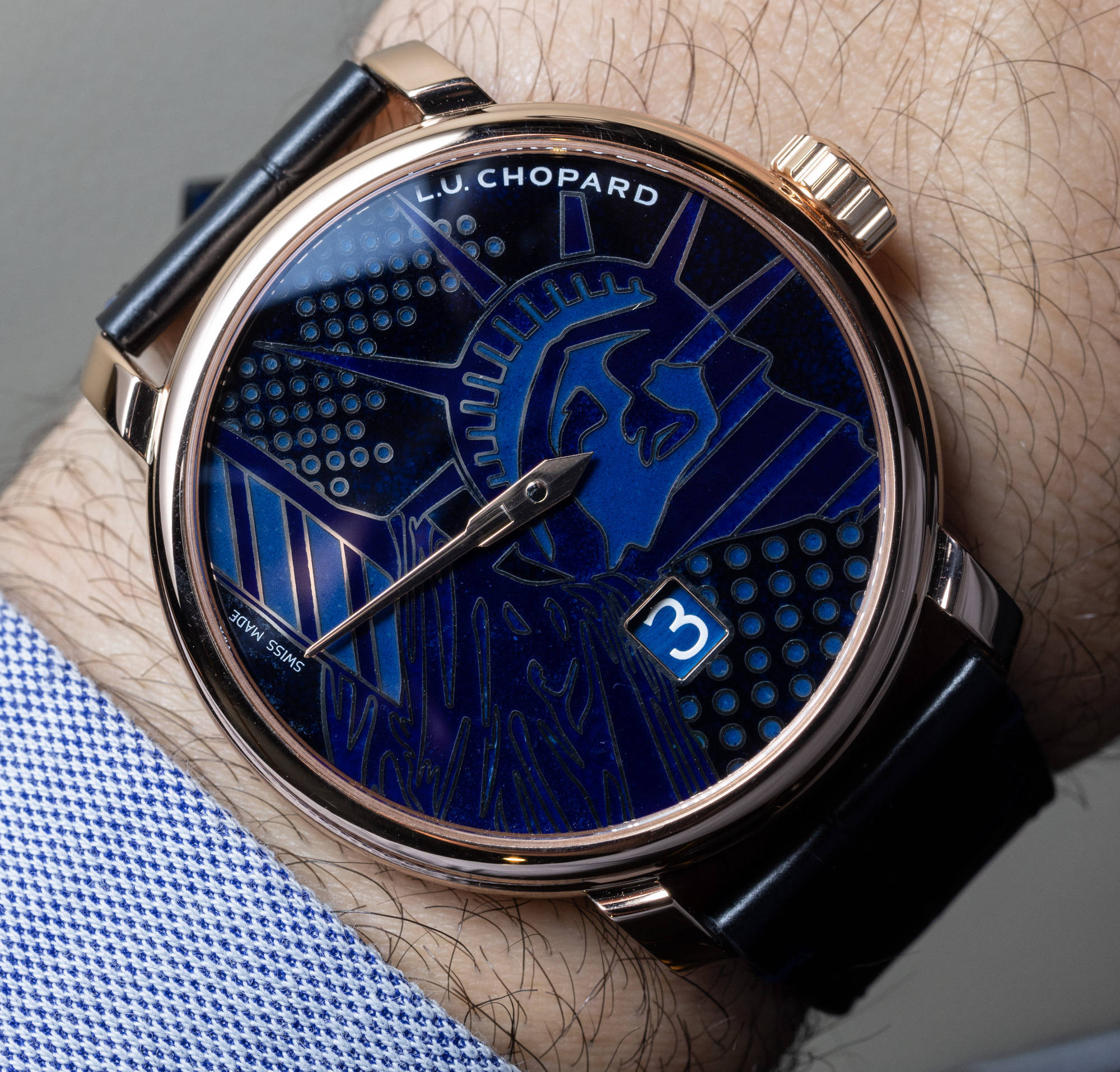 This Chopard watch is a one-of-a-kind “piéce unique” that the Swiss watchmaker produced for sale at its newly opened 5th Avenue brand flagship store in New York City. aBlogtoWatch has covered this store opening in other articles, but today, I’d like to look at this special homage from Chopard to the Big Apple. There are no apples on this Chopard L.U.C Quattro Spirit 25 Fifth Avenue Edition watch, but there are a few apples on the special Happy Diamonds watches Chopard also produced as part of the Fifth Avenue store opening. This reference 161977-5004 watch has, instead, a hand-painted cloisonne enamel dial featuring a Pop Art-style rendition of the Statue Of Liberty.

Chopard has the in-house ability to produce enamel-painted dials but does not do so very often — especially for men’s watches or those that are much publicized. Enamel dials are still among the most prestigious available, and most companies that do them do not necessarily have the in-house expertise for this but rely on various local artist contractors who are known to specialize in miniature enamel dial painting. The technique used for this L.U.C Quattro Spirit 25 Fifth Avenue Edition watch is cloisonne enamel that begins by creating a series of small cells from metal (often gold) wire. The sections between the wire-formed shapes are filled in with enamel paint and baked for hardening and permanence. Here, we see a somber study in blue when it comes to the colors used on this enamel dial composition. 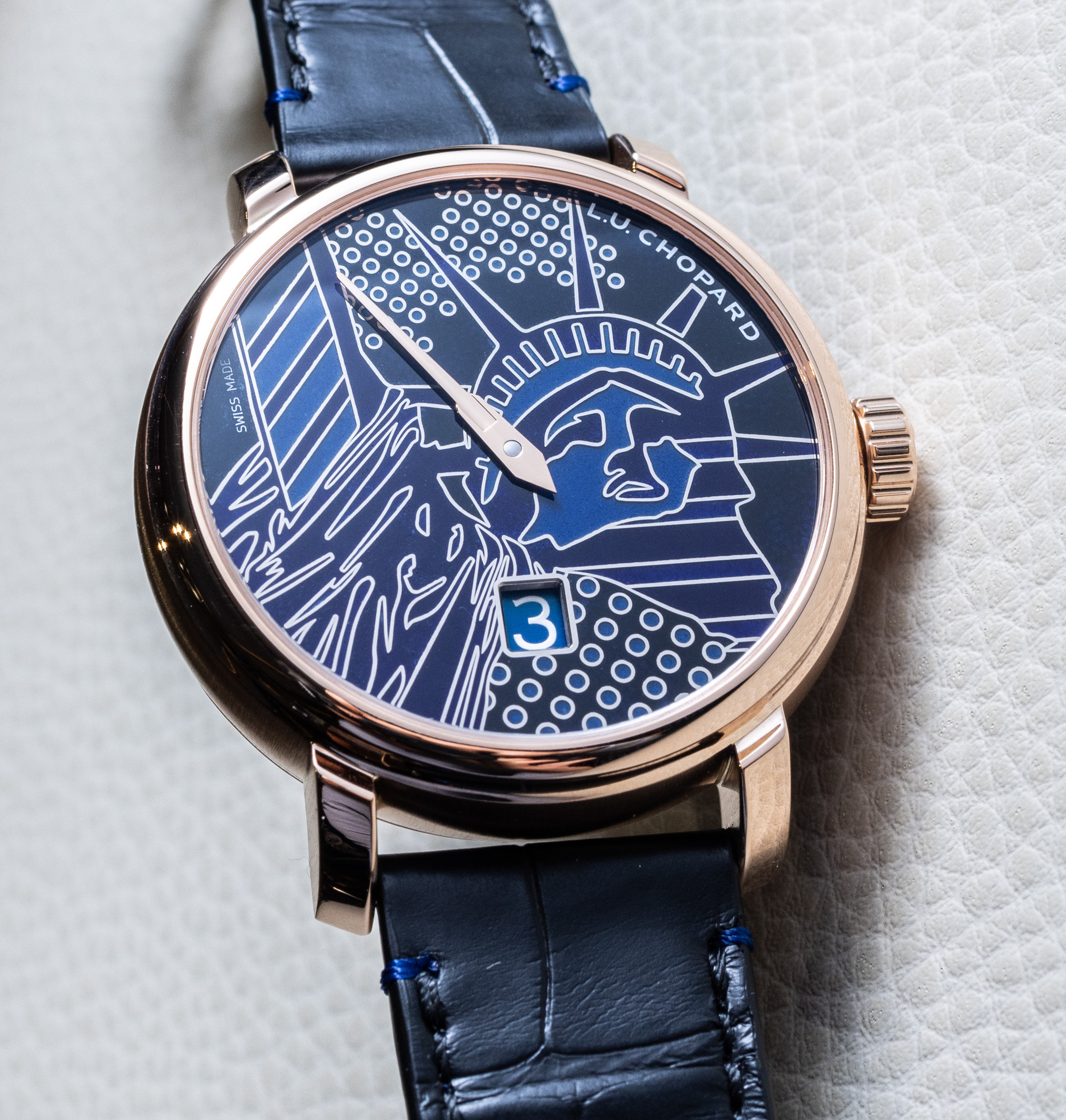 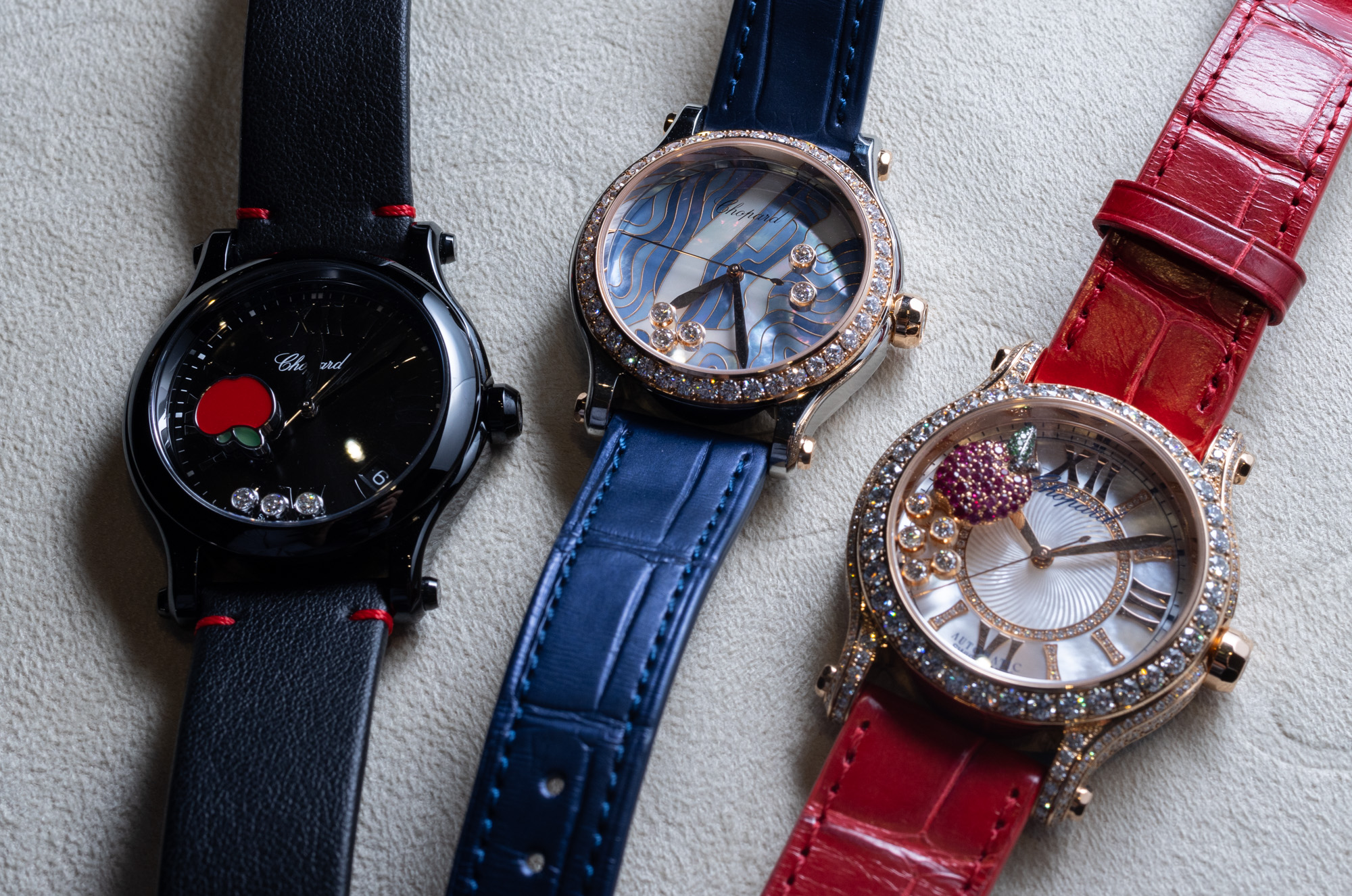 This piéce unique watch is nevertheless based on a L.U.C model from last year — the L.U.C Quattro Spirit 25 — which introduced a jumping hour complication to the in-house movement mechanical portfolio. This is built on the manually wound Quattro movement system, which uses four mainspring barrels for a very long level of power reserve. Even with the increased power taken from the jumping hour complication, the in-house Chopard L.U.C caliber 98.06-L still offers eight days of power reserve (192 hours). Don’t miss the small power reserve indicator, which is visible through the rear of the watch on the movement. Having a power reserve indicator is very handy in a watch like this, in my opinion.

Otherwise, the only indicators are a traditional minute hand and a jumping hour mechanism with a window at 6 o’clock on the dial. Chopard engineered the L.U.C 98.06-L movement to perform in a very satisfying manner, as well as to meet client expectations. What do I mean by the latter? In short, Chopard designed the L.U.C 98.06-L movement so that the jumping hour mechanism jumps precisely when the minute hand hits the 60-minute marking. The system works very nicely and is a testament to how much Chopard is aiming to satisfy elite tastes and expectations with regard to the aesthetics and performance of its calibers. Another element of quality and status in the movement is that it has a Seal of Geneva certification (meaning that it was produced within the Canton of Geneva). This is another mark not only of movement performance and reliability but also of aesthetic quality and origin. 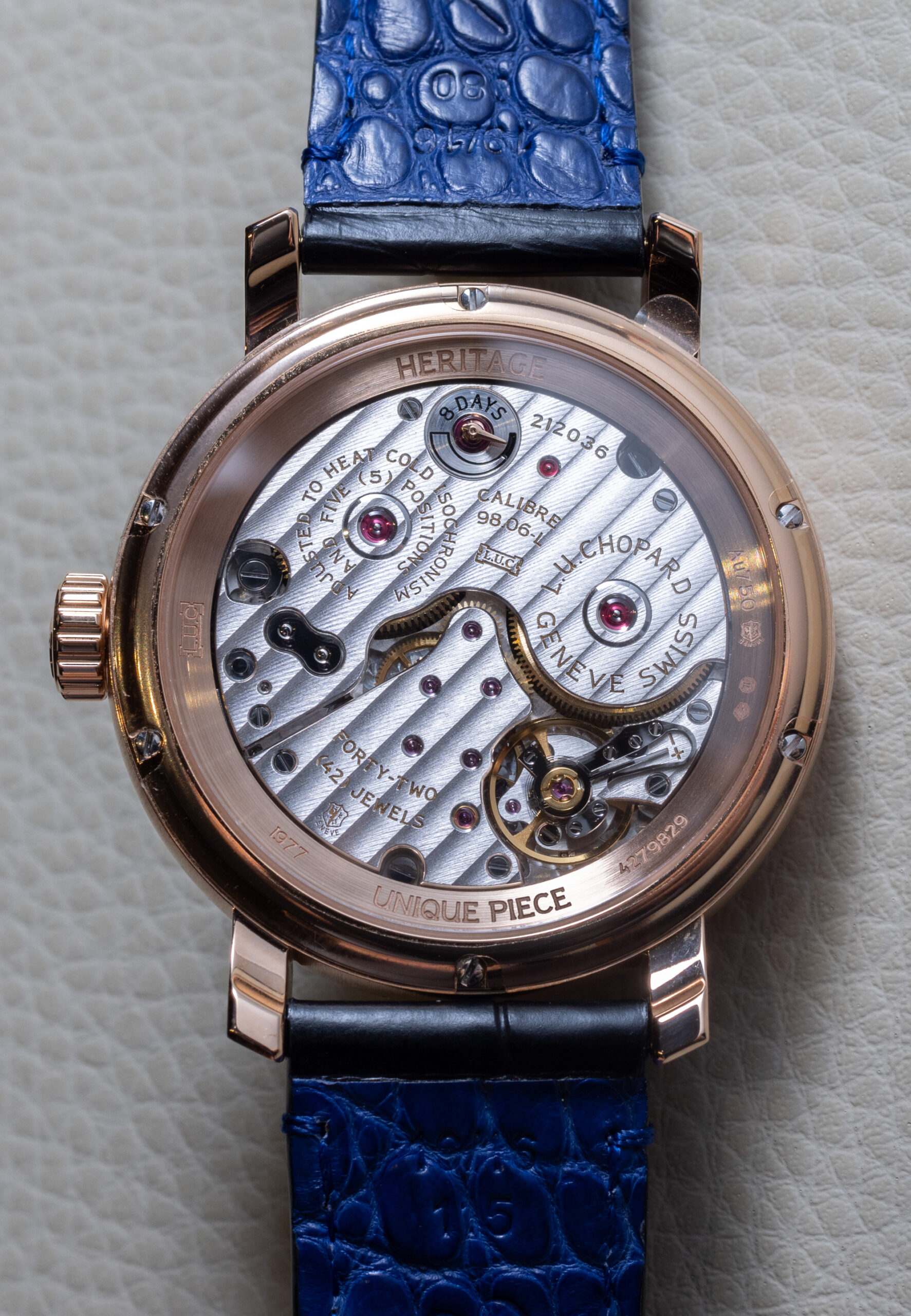 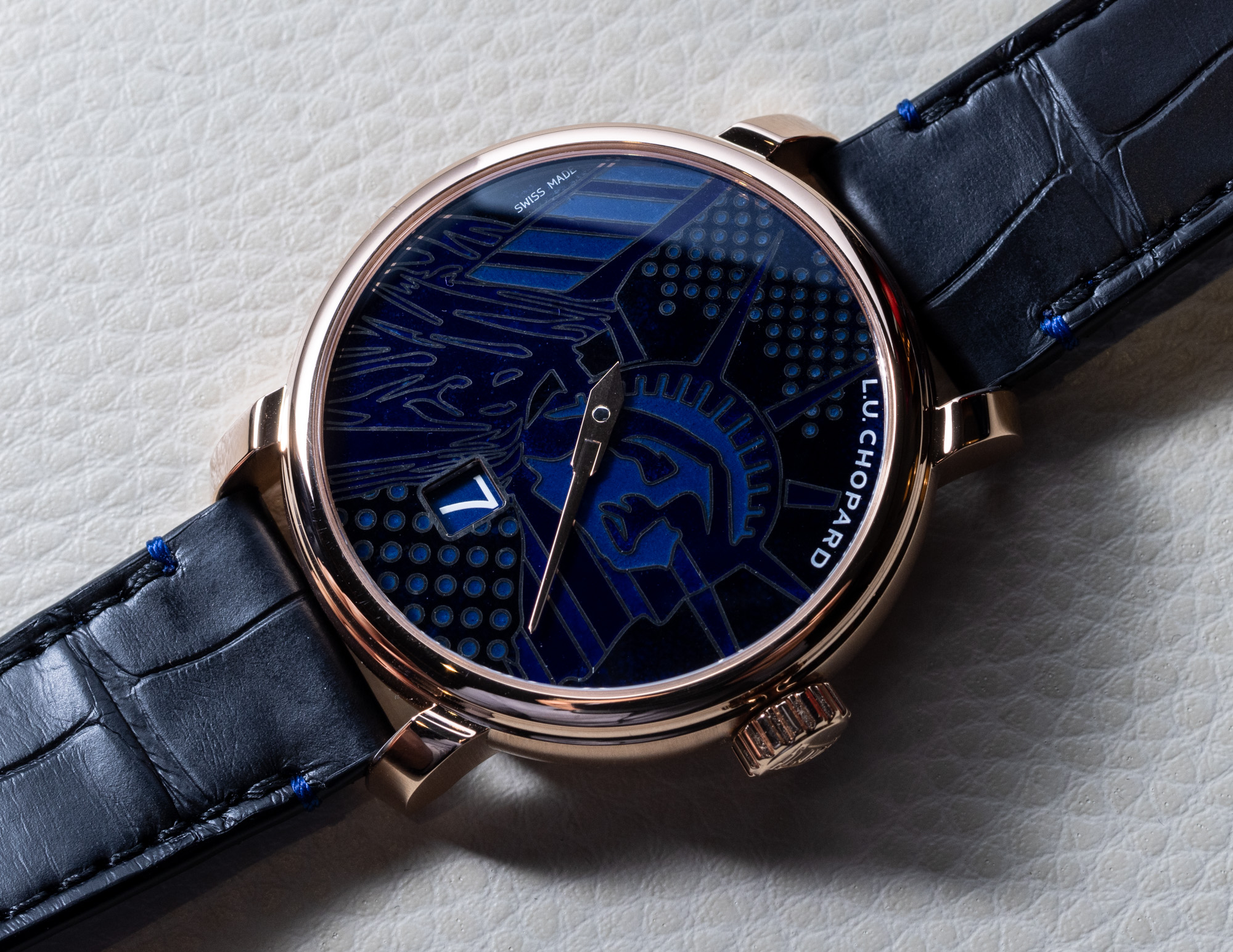 The L.U.C Quattro Spirit 25 model itself was debuted to celebrate the 25th anniversary of the opening of the Chopard movement manufacture in Fleurier, which is where the company’s most elite and beautiful watches are produced. Many of Chopard’s cases, dials, and bracelets are made in-house, which, in tandem with a handful of movement-making facilities, makes Chopard one of the most agile independent watchmakers around. Going back to the L.U.C Quattro Spirit 25 Fifth Avenue Edition watch, it comes in an 18k rose gold case that is 40mm-wide, 10.3mm-thick, and water resistant to 50 meters. Attached to the case is a hand-stitched blue-colored alligator strap. 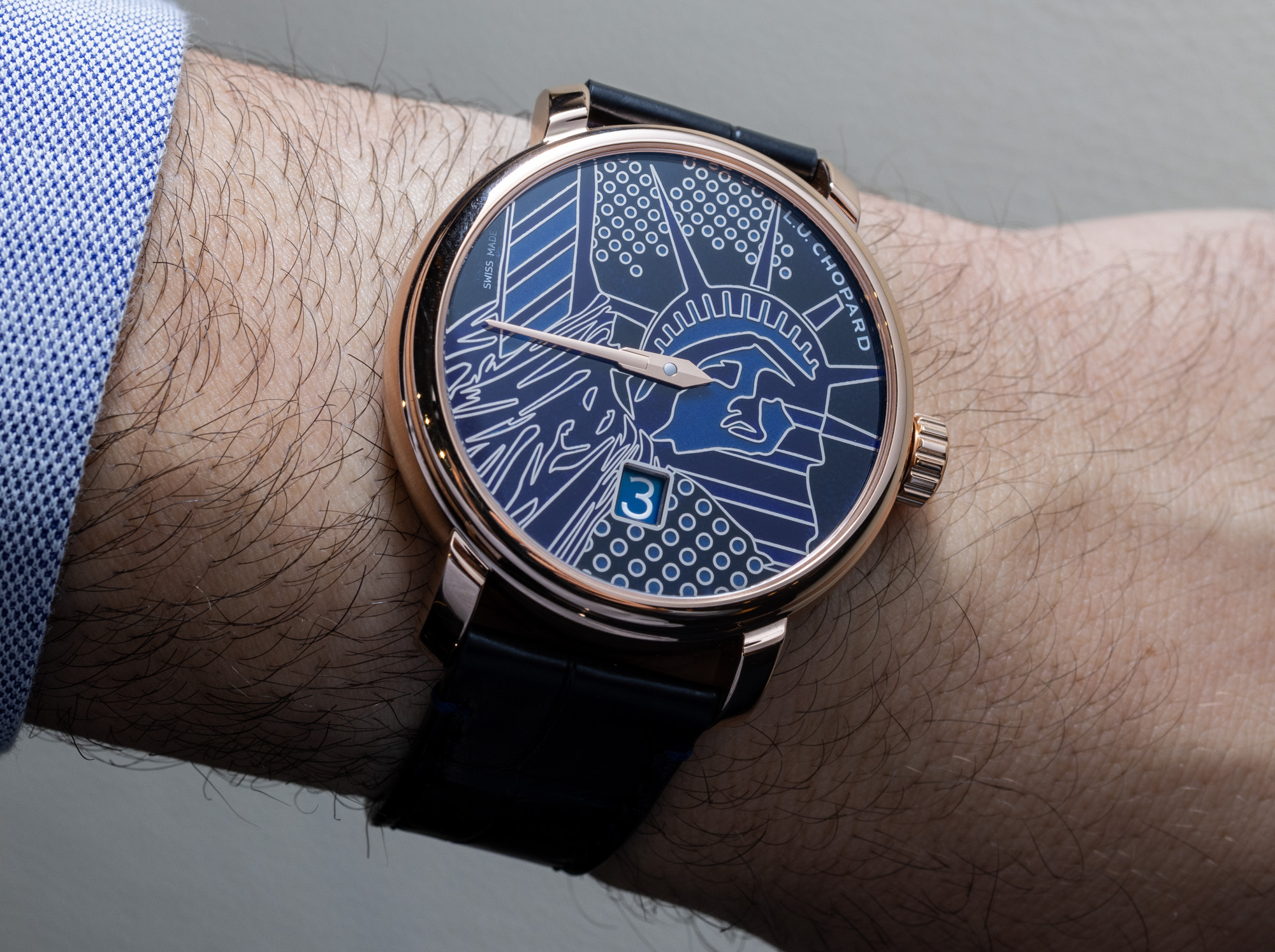 Even though Chopard has produced only one watch like this as a special item for sale in the New York City flagship boutique, the underlying platform is one that is available in other Chopard watches (or will be). And watches like this give hints as to some of the options available through Chopard’s various customization programs for those who would like their own lives celebrated on a hand-painted enamel dial. I suspect that more limited edition or piéce unique watches will come to the new Chopard Fifth Avenue store in Manhattan. Price for this one-of-a-kind Chopard L.U.C Quattro Spirit 25 Fifth Avenue Editon watch is $58,000 USD. Learn more at the Chopard website here.