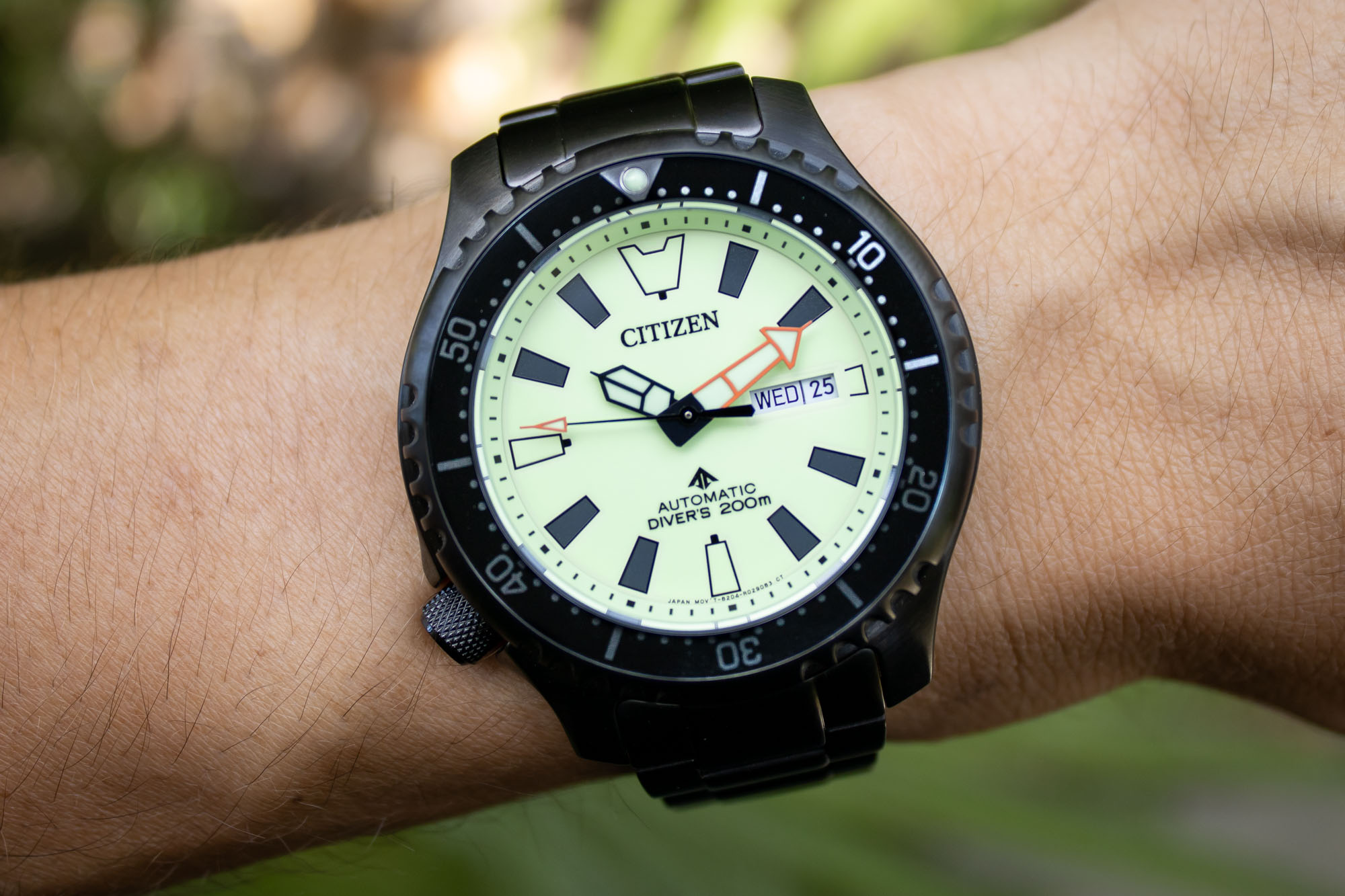 Easily one of the most famous dive watches from Citizen’s history is the classic fan-favorite Fugu. The original Citizen model known as the “Fugu” debuted back in 1989, and it has a rich history that consists of everything from being used by the Italian Navy to starting many people’s collections as their first-ever automatic watch. However, the Citizen Fugu was revived in 2018, and it has since resumed its role as one of the standout affordable dive watches from the brand’s vast catalog. 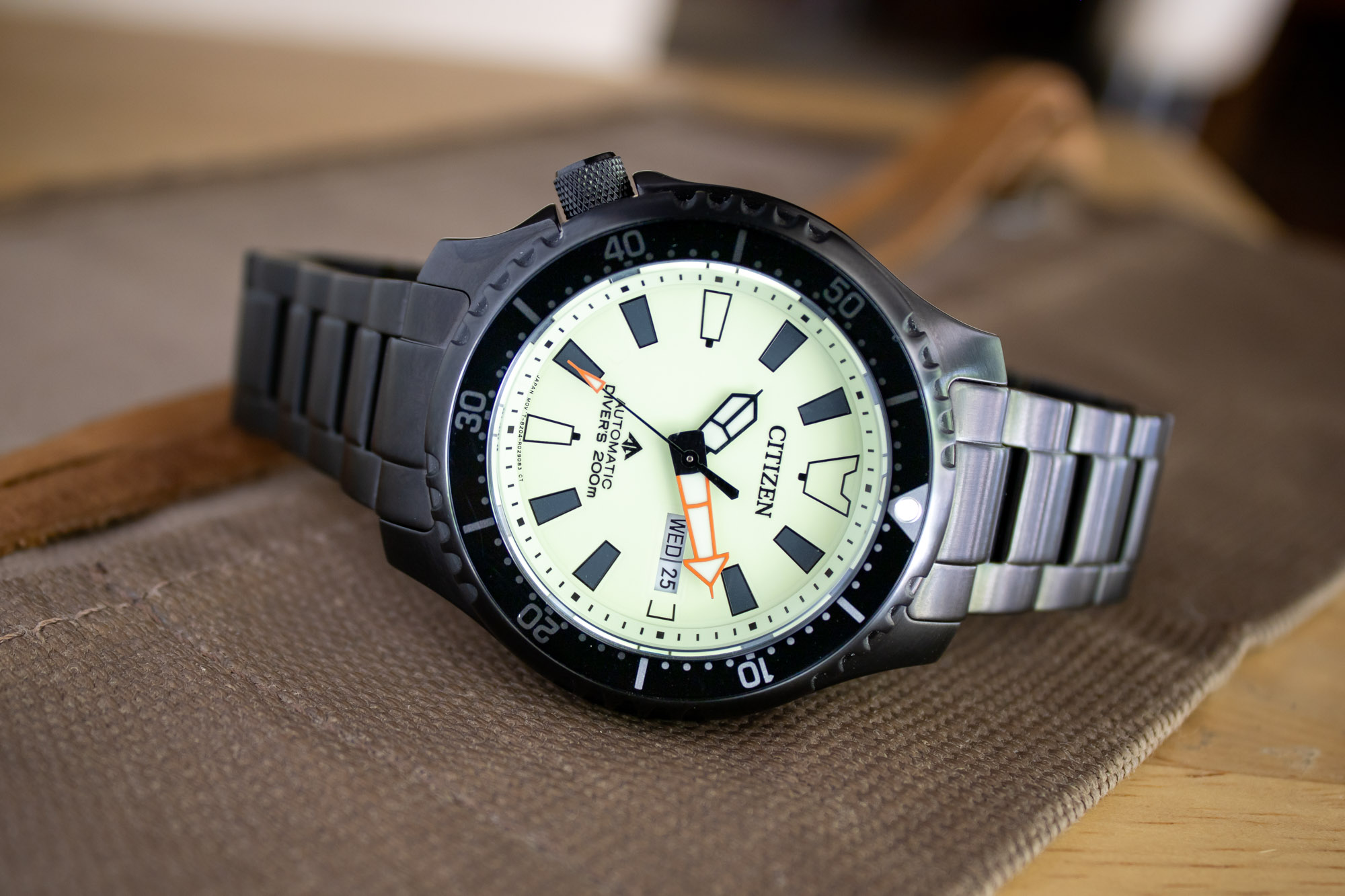 The Fugu nickname itself means “pufferfish” in Japanese, and it comes from the watch’s distinct bezel with alternating grooved and smooth sections around its outer edge. The actual resemblance to a puffer fish is somewhat debatable (to say the least), but the same can be said about virtually all watch nicknames, regardless of whether you’re talking about the Seiko “Turtle” or the Rolex “Kermit” Submariner. Watch nicknames can often be entirely informal, but in the case of the Citizen Fugu, it’s one that is such a part of the model’s history that you will even find the Fugu name listed in product descriptions on the Citizen website, and the caseback of the new watches themselves are adorned with stylized pufferfish engravings. Since relaunching the Fugu in 2018, Citizen has produced a fairly significant number of different colors and configurations of the model, although the specific version that I have in for review is the full-lume dial Fugu with the blacked-out case and bracelet, which is formally known as the Citizen Promaster Dive Automatic NY0155-58X. I’m not aware of a nickname for this exact configuration, but given that the “Fugu” moniker applies to the whole range, and since there are even other Fugu models with lume dials or black ion-plated cases, whatever nickname the watch community comes up with will need to touch on the fact that this variant has both of those features. 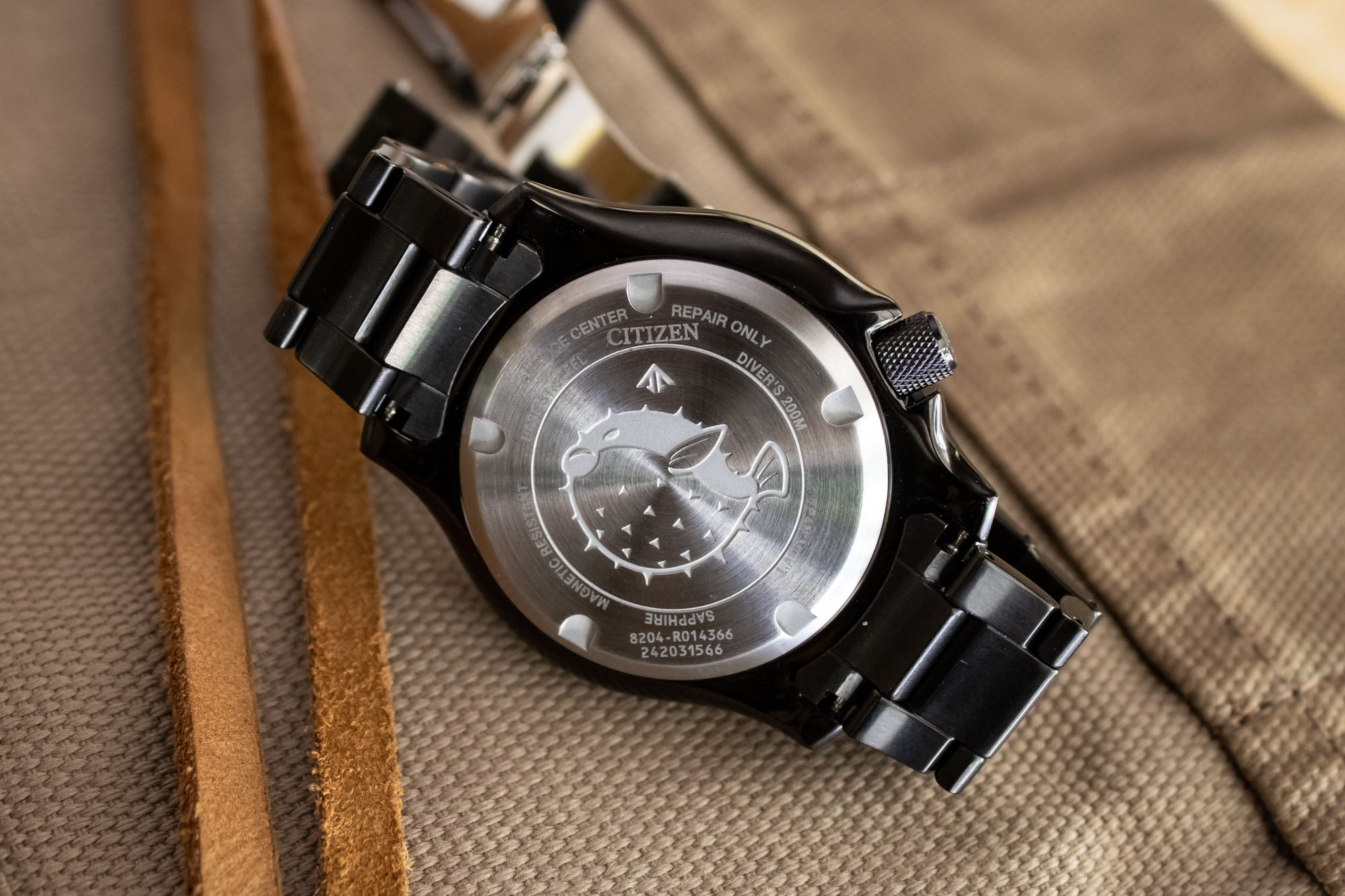 Nicknames and nomenclature aside, the 44mm case of the Citizen Fugu measures 13mm-thick with a total lug-to-lug distance spanning approximately 50mm once you factor in the way that they slightly taper inward to meet the edges of the bracelet. While both the case and bracelet are covered in a black ion-plated finish, the underlying metal is given a matte brushed texture across the entirety of its top surfaces, while the sides of both the case and bracelet links are high-polished for a gloss black finish. Just like the original Fugu model, the modern version features a left-handed crown configuration, which places it on the side of the case at the 8 o’clock location. The purpose of this rather unusual layout isn’t to appeal to left-handed individuals (who only make up approximately 10% of the population), but rather to keep the crown out of the way and safe from harm. A number of other Citizen dive watches follow a similar approach of placing their crowns on the left side of their cases, and this is something that Citizen has been doing for decades. The crown itself is signed with the brand’s Promaster logo and it screws down to help ensure the watch’s ISO-certified 200 meters of water resistance. 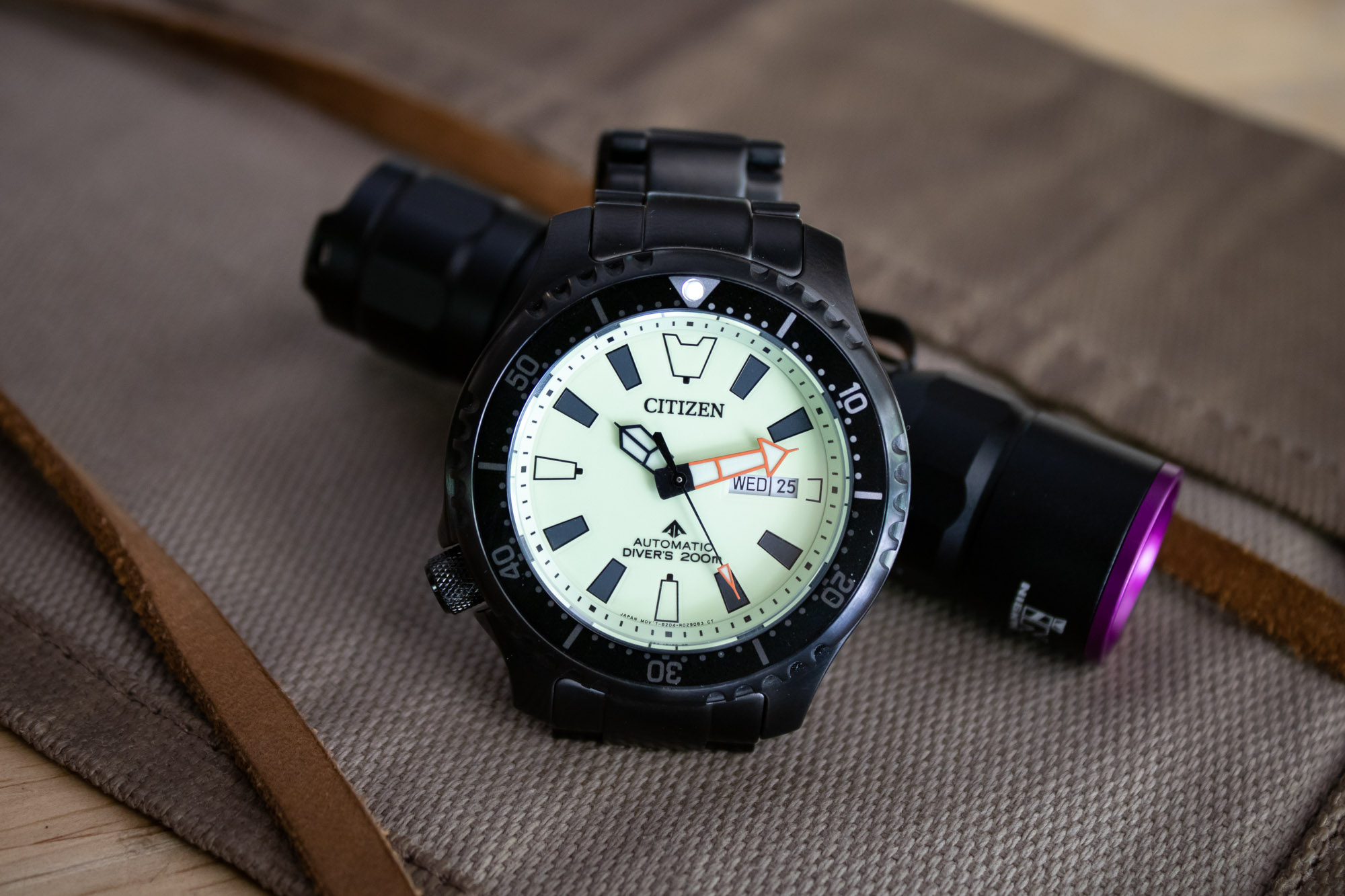 The case extends on either side of the crown to create small but functional guards, while the solid stainless steel screw-down caseback is adorned with an engraving of a pufferfish as a reference to the watch’s famous nickname. Sitting on top of the case is a flat scratch-resistant sapphire crystal, which is a welcome addition and represents a significant step up from the mineral glass crystals that are most frequently found on Citizen’s budget-friendly dive watches. Surrounding the crystal is the Fugu’s signature bezel with alternating grooved and smooth sections, which offers 120-click unidirectional motion and is fitted with a black anodized aluminum insert. While the bezel itself is quite easy to grip, the insert somewhat suffers from legibility issues. Rather than having silver numerals printed against a black surface, the markings on the bezel insert are darkened past the first fifteen minutes, which creates a stealthy smoked mirror effect that isn’t apparent when looking at Citizen’s product photos of the watch. While this insert aesthetically complements the black ion-plating of the case, its darkened numerals noticeably hinder overall legibility in low-light conditions. 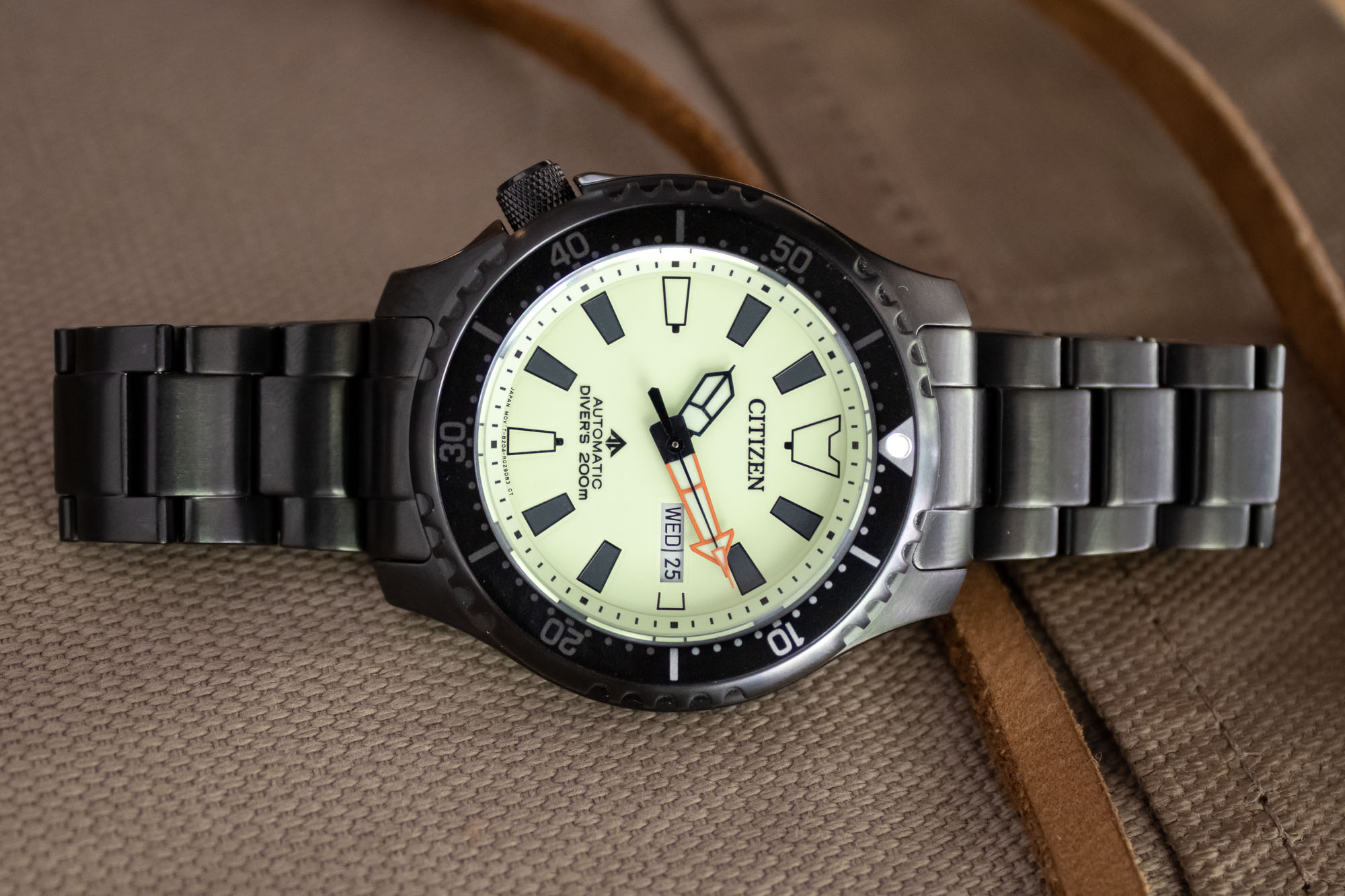 The full-lume dial is likely one of the main reasons someone would opt for this particular version of the Fugu over one of its siblings and, as you might expect, this dial glows like an absolute torch in the dark. Black markings clearly indicate the time against its fully luminous surface, while the day and date are displayed through a single rectangular window at the 3 o’clock location, with a dual-language calendar disc that features its markings for Sunday in red letters. Like other fully-luminous dials, the one fitted to this variant of the Citizen Fugu isn’t completely white in the daylight, and it kind of perpetually has this greenish yellow color, that somewhat looks like your watch dial has jaundice. With that in mind, the orange accents on both the minute and seconds hand help mitigate this appearance by playing into its warmer tones and embracing it as a color on the watch, instead of treating it as something that should be white and simply isn’t. 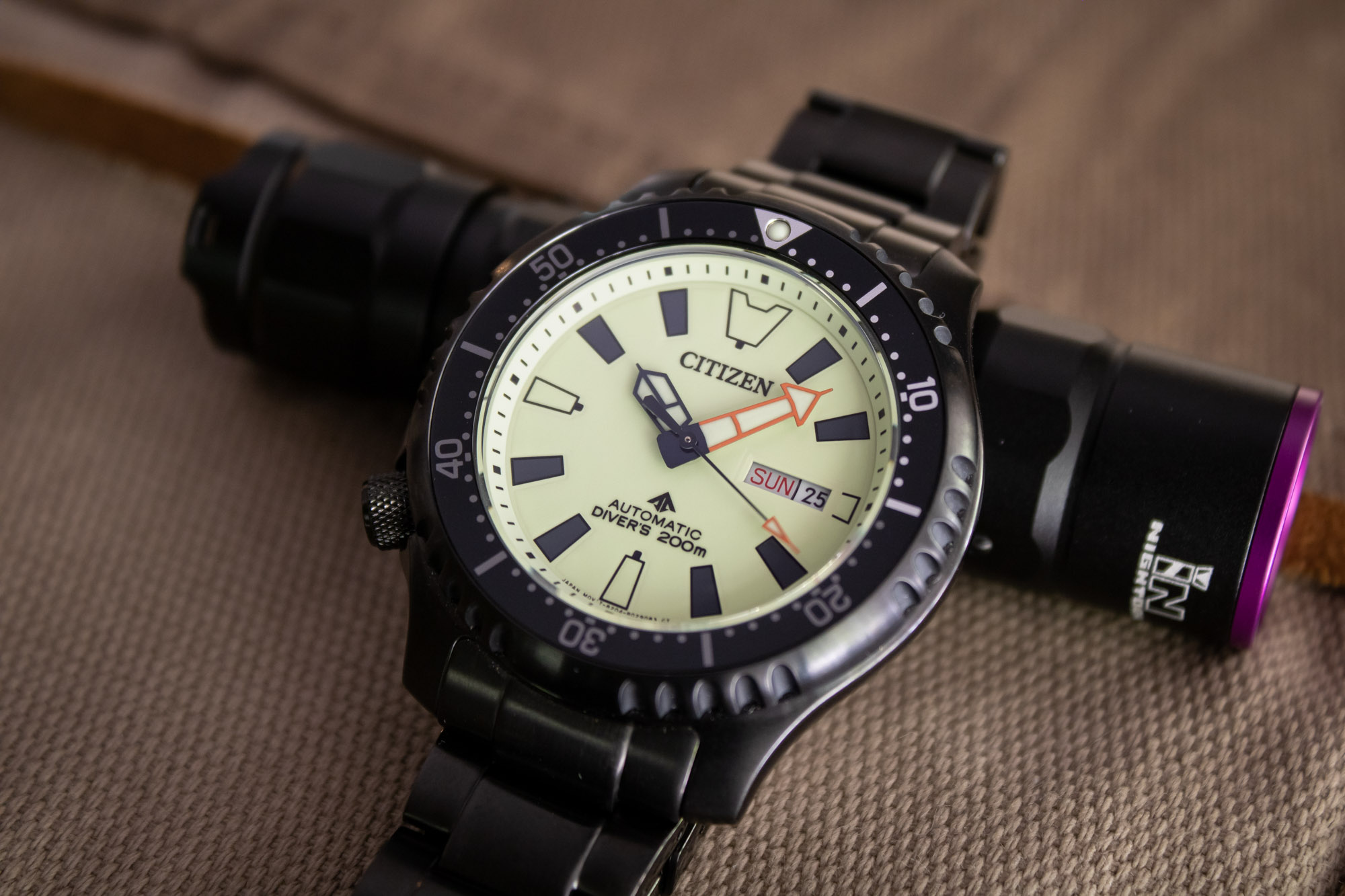 The hands themselves are bold and distinctly shaped, meaning that there is zero chance of mixing them up at a glance, especially considering how the minute hand is finished orange. The surfaces of the rest of the hands are finished black for maximum contrast with the dial, while the spaces between their structures are filled with a generous application of luminous material. Normally, highly luminous hands on a dive watch would be a good thing, but since the dial itself glows on this version of the Citizen Fugu, non-glowing hands would have probably offered better overall contrast in the dark. Granted, watches aren’t always about just pure functionality, and it’s not like this particular model exactly suffers from low-light visibility. Half the fun of owning a watch with a fully luminous dial is to see the whole face light up whenever you happen to venture into the dark, and the more glowing components it has, the more enjoyable it is for the inner child within all of us. 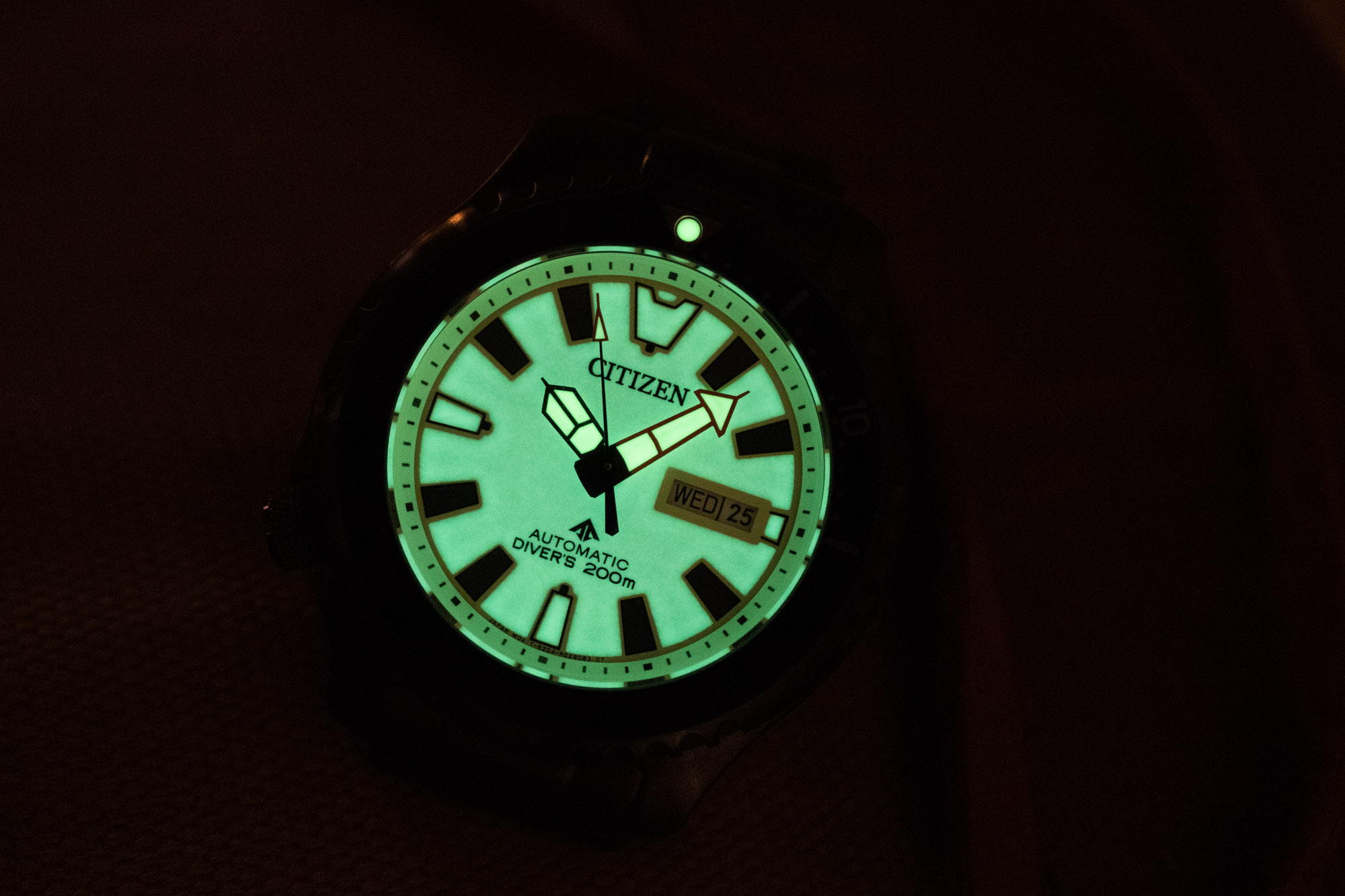 Surrounding the dial itself is an angled chapter ring that is also fully luminescent with a minute track printed in black. The markings for the five-minute markers appear in a heavier print than the rest, and the angled structure of the ring adds dimension to the dial. The chapter ring itself is a separate component from the dial surface, similar to what you will find on the various Seiko SKX watches, and here lies a potential sticking point for the OCD-inclined among us. Just like many watches that feature this two-piece construction, alignment can often be hit or miss, and this is something that famously plagued the SKX range while it was still in production. On the example that I have, the chapter ring alignment is less than stellar; however, it’s important to remember that what I was sent is a press sample that has likely been passed around a few times and may not be fully indicative of what you will actually find among the watches that make it onto store shelves and into the hands of dealers. Either way, it’s an important point to keep in mind, as alignment can be a serious sticking point for some collectors and it ultimately became something that got discussed ad nauseum on the various forums in regards to the now-discontinued Seiko SKX range. 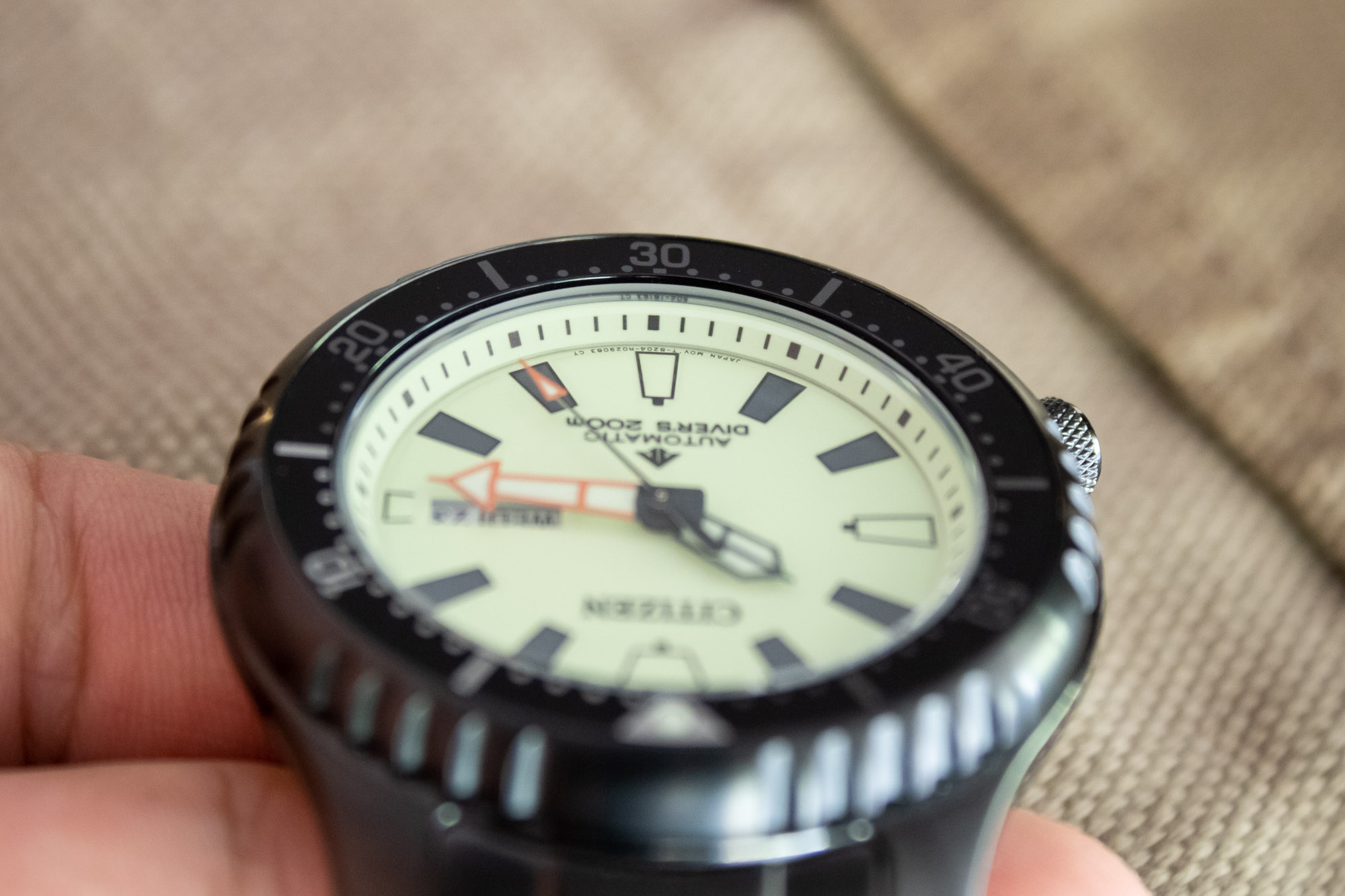 Powering this series of modern Citizen Promaster Fugu watches is the Miyota 8204 automatic movement, which offers hacking, hand winding, and a double quickset for both the day and date displays. Running at a frequency of 21,600vph and offering a power reserve of approximately 42 hours, the Miyota 8204 is very much a known quantity that is used in countless different self-winding watches throughout the industry. While it is based on Miyota’s entry-level movement platform and offers little horological intrigue with virtually no decorative finishing whatsoever, the Miyota 8204 is known for delivering reliable and proven performance, and it promises to do the exact same for Citizen’s modern Fugu dive watches. 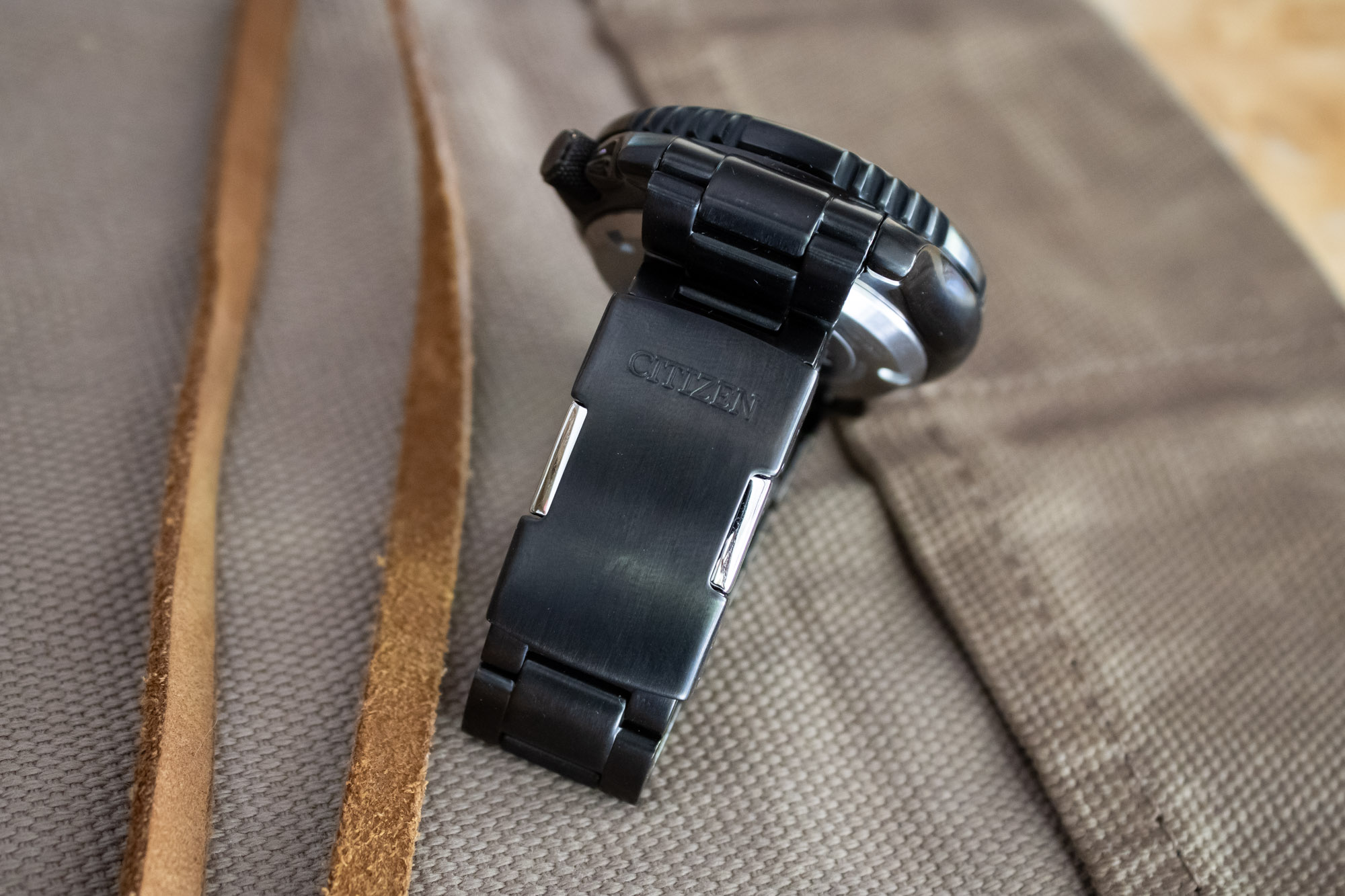 Fitted to this particular variant of the Fugu is a stainless steel bracelet with a matching black ion-plated finish. The end-links and bracelet links themselves are all solid in construction, although they are connected by pins rather than screws. The fit of the end-links is better than most at this price point, but the clasp is arguably the weakest aspect of the entire watch. As they are fairly intricate components by nature and receive constant physical manipulation each day, high-quality watch clasps are often one of the more difficult components for manufacturers to produce. Expectations need to be somewhat reasonable given the affordable price point of the Fugu, although with Citizen’s incredible prowess as a manufacturer, it would have been nice to see something a bit more involved than just a simple stamped metal fold-over clasp. Some type of extension system beyond just two holes of micro-adjustment would have been a welcome addition — especially considering that this is supposed to be a dive watch. This is a minor quibble, all things considered 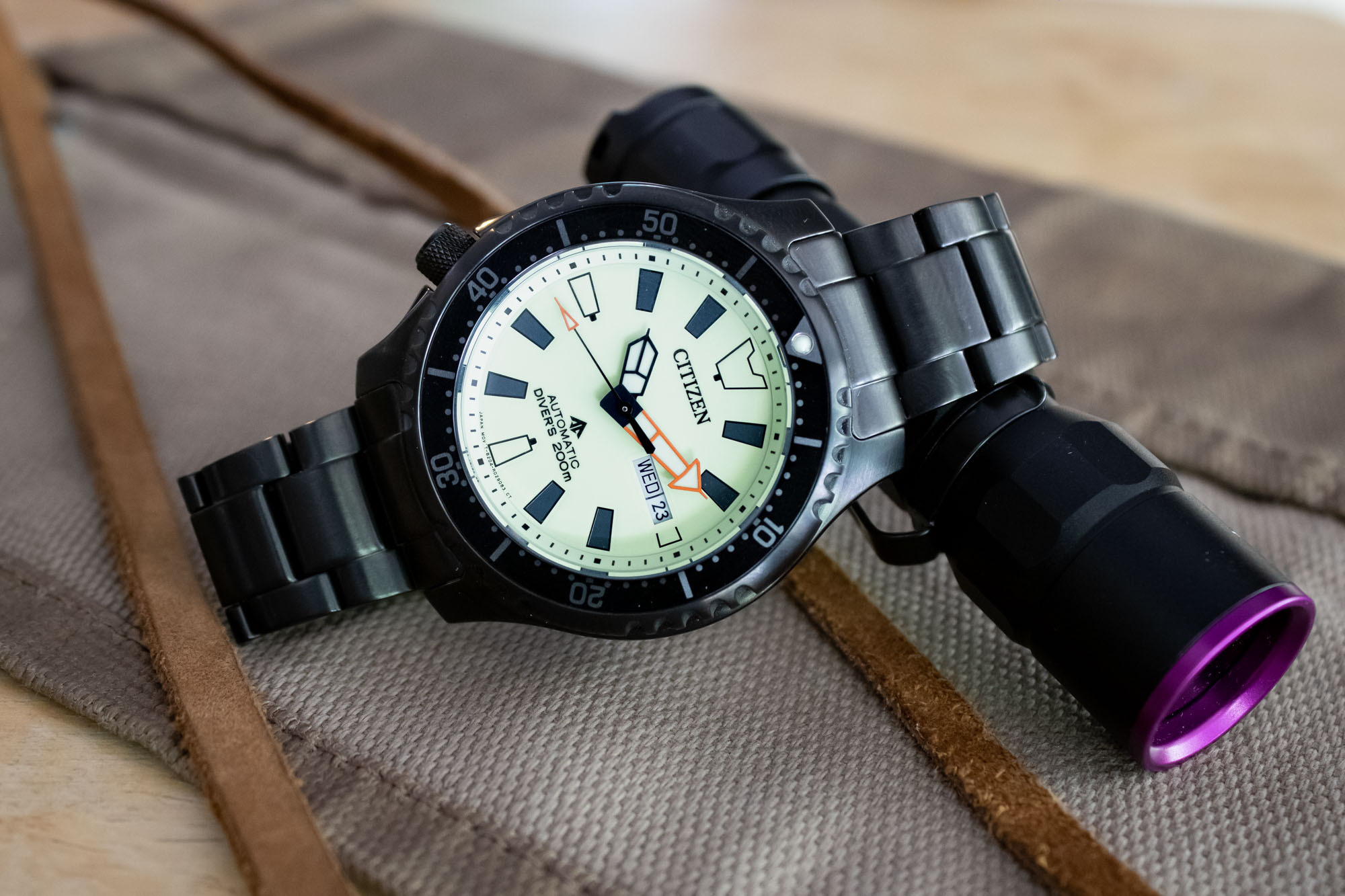 The Citizen Promaster Dive Automatic NY0155-58X is accompanied by an official retail price of $695 USD, which ultimately represents a premium of $100 compared to what Citizen charges for an otherwise identical version of the Fugu that lacks a fully luminous dial and black ion-plated finish. Additionally, it’s important to remember that Citizen is one of the world’s largest watch manufacturers, so the Fugu isn’t some boutique-exclusive piece for which you are guaranteed to pay full retail if you want to purchase one. You will frequently find Citizen watches available for sale at local malls and department stores, so there is always the possibility that you might be able to snag a great deal on this blacked-out lume dial Fugu during some holiday sale or seasonal discount event. Many dive watches can follow similar overall designs, but the Citizen Fugu offers a distinct aesthetic that is emblematic of the brand’s design language and offers a ton of fun on the wrist for significantly less than a thousand dollars. For more information, please visit the manufacturer’s website.