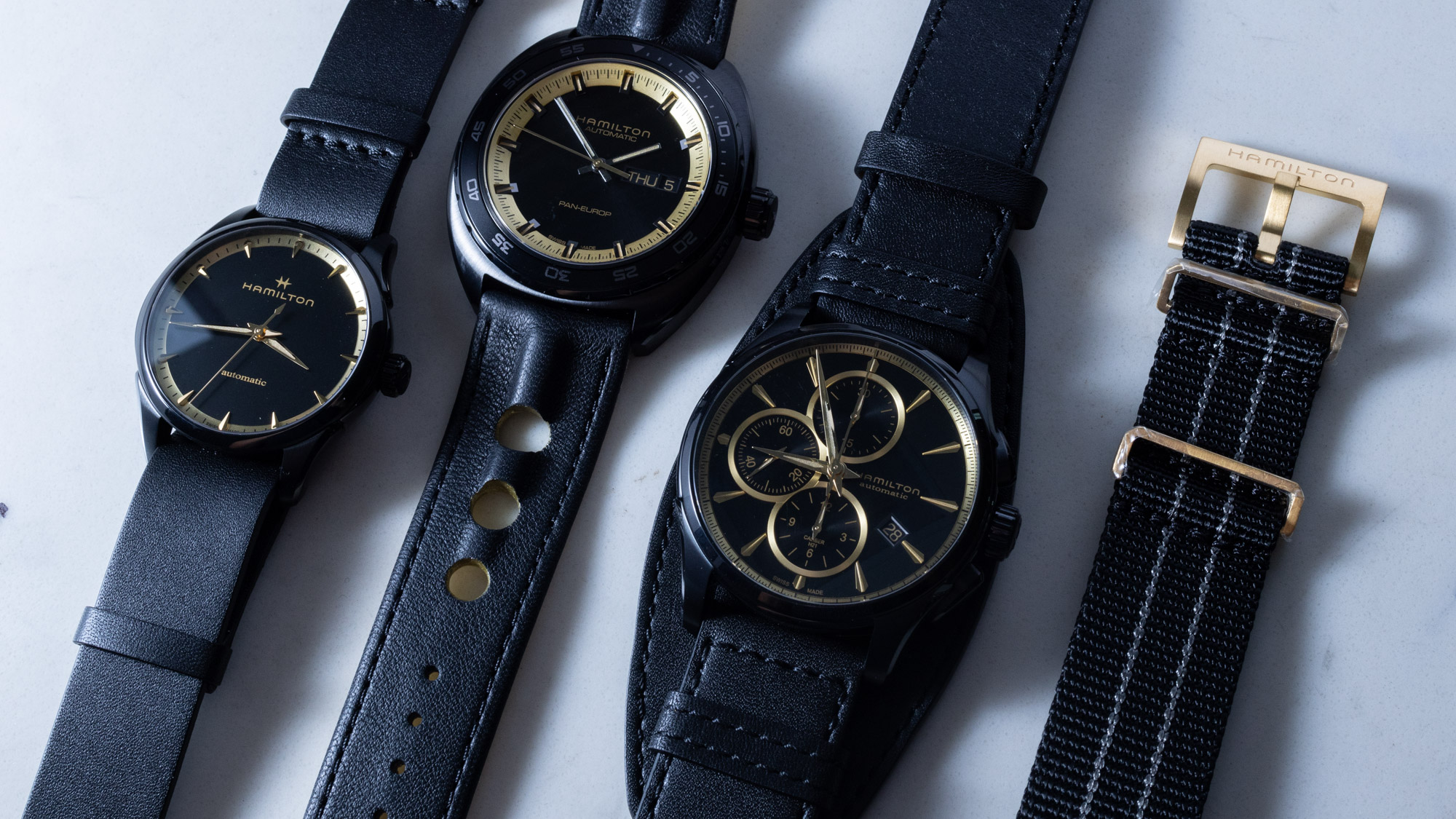 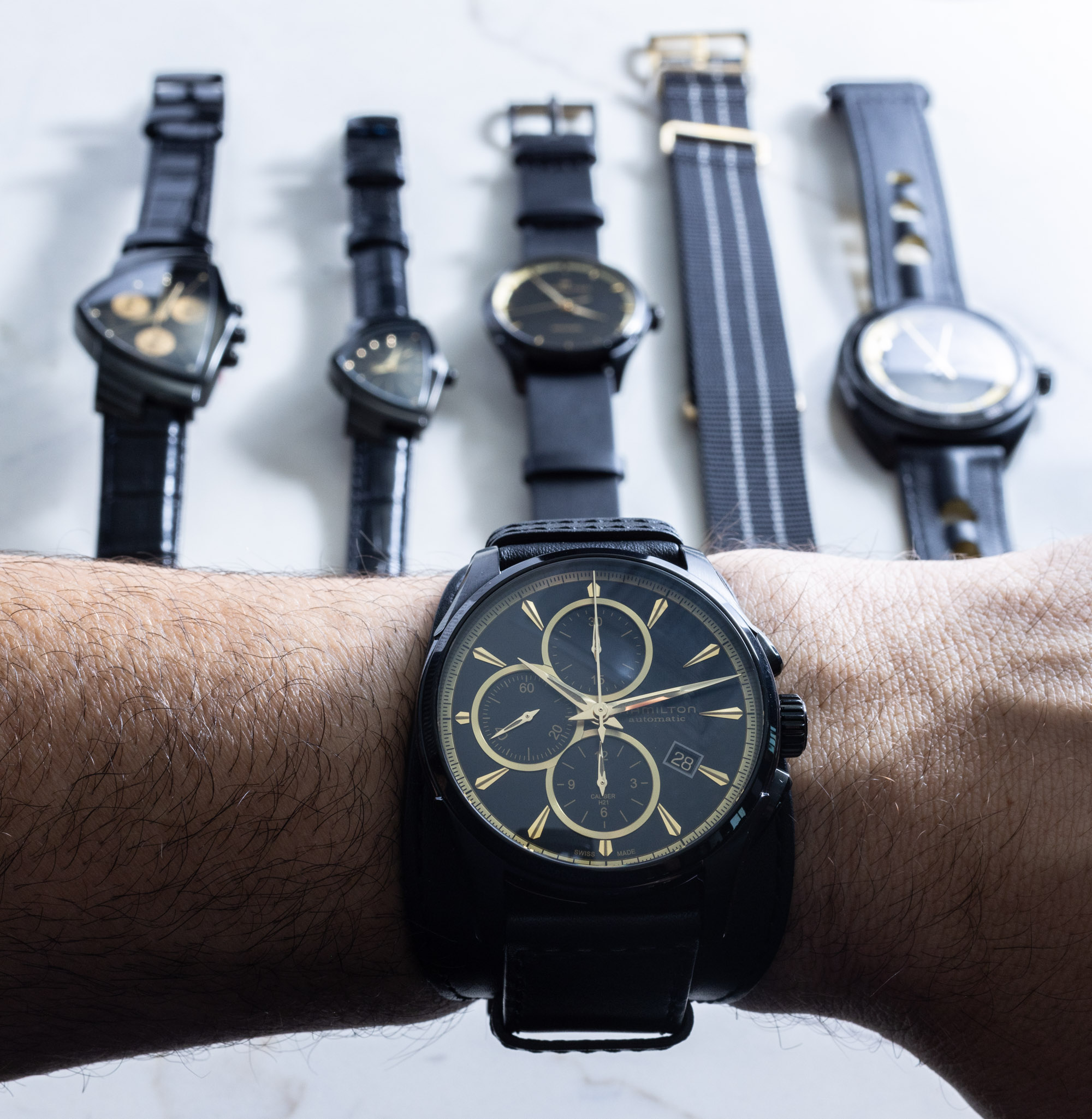 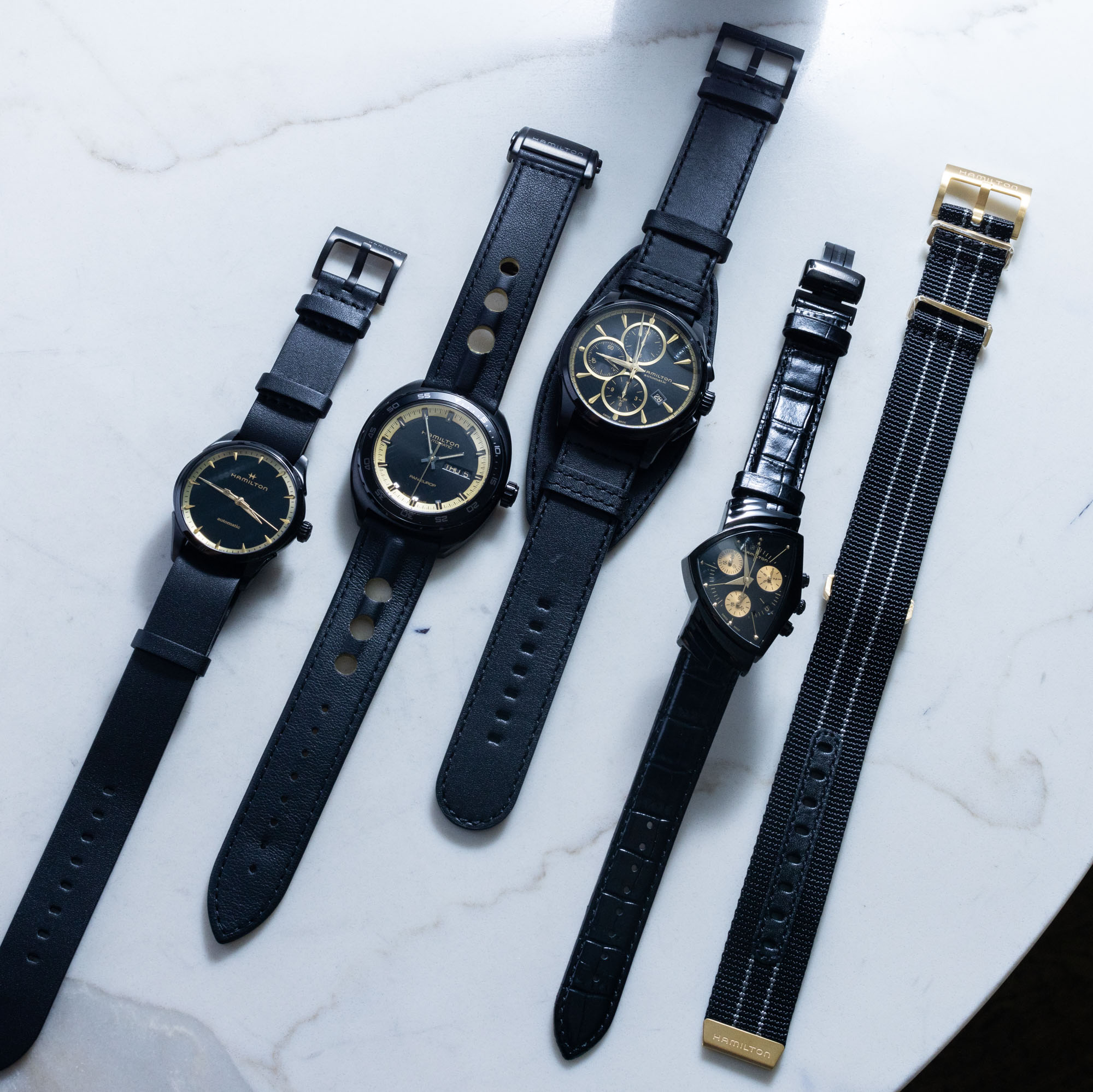 Founded in Lancaster, Pennsylvania, in 1892 and is an important component of the SSIH — a major holding you’ll know today as The Swatch Group. The SSIH story is a fascinating one forever linked to the history of ETA and The Swatch Group — and you can learn all about it here. Hamilton is no one-watch-brand but rather is among those fortunate companies that have successfully produced a number of immediately recognizable and lasting collections. It’s safe to say that these five, presented in black and gold for 2022, are among the most popular Hamilton watch collections. All the cases are in stainless steel with black PVD coating. 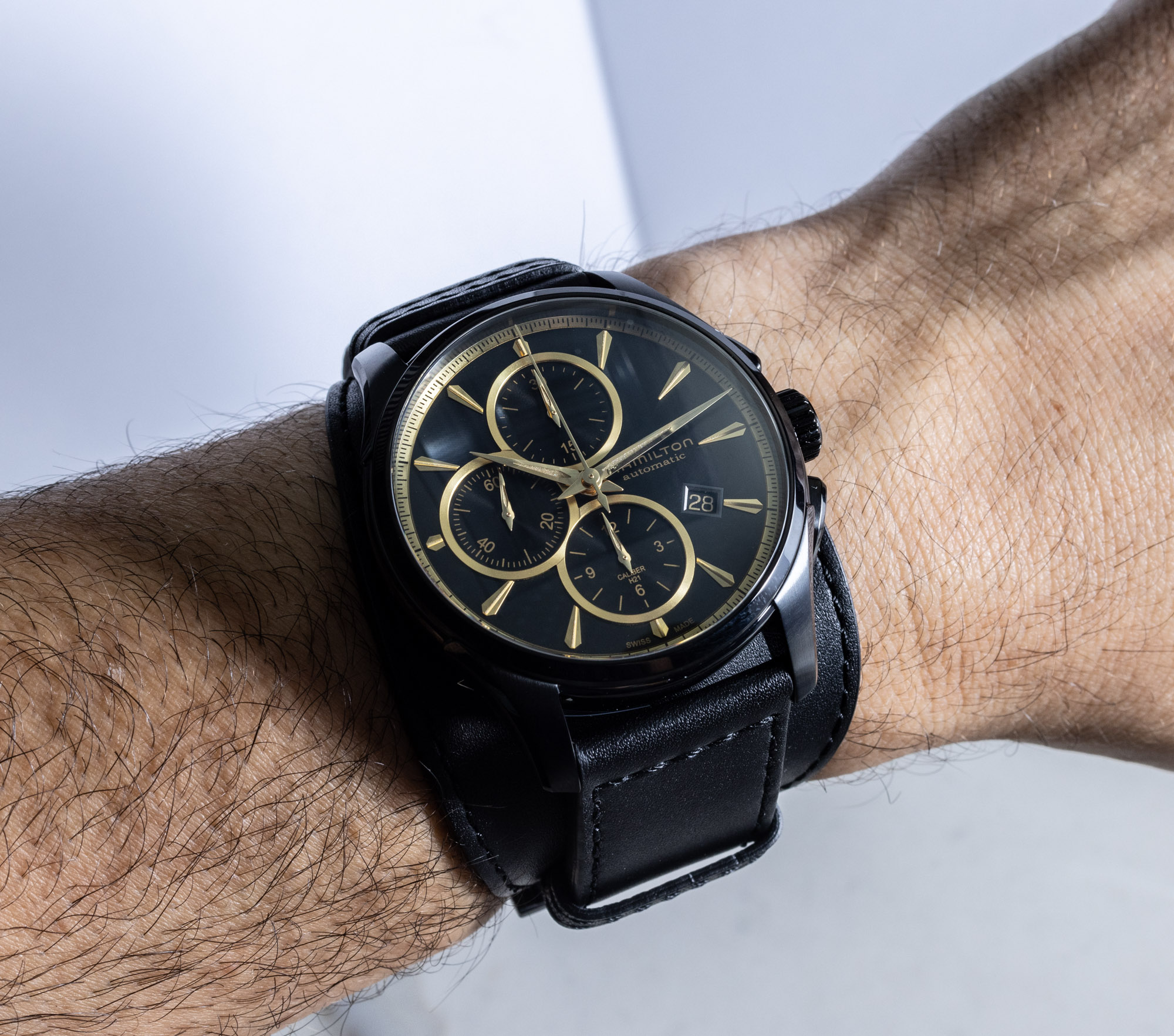 The Hamilton Jazzmaster Auto Chrono, seen here as reference H32506730, looks surprisingly at home on the matte-black bund leather strap. The 42mm-wide case sits on a rather exotic-looking double strap that uses a wide, bracelet-like additional element. Bund straps were first worn by pilots of the Bundesrepublik, i.e. Germany of the Second World War, and it’s designed to keep an exposed caseback from causing freeze or fire damage to the wearer in case they flew in extremely cold climates or if there was a fire onboard. Like many things with military origins, this item took on a life of its own and became highly popular decades later, and we are seeing it making a comeback once again. It’s just as bold in person as you might expect from these images — but that’s what makes it a good match to the black-and-gold theme.

Fitted with an H-21 automatic movement with 60 hours of power reserve, the Jazzmaster Auto Chrono is on the thicker side at 15.23mm, but at least it combines that with a 10-bar water resistance rating (100m equivalent). 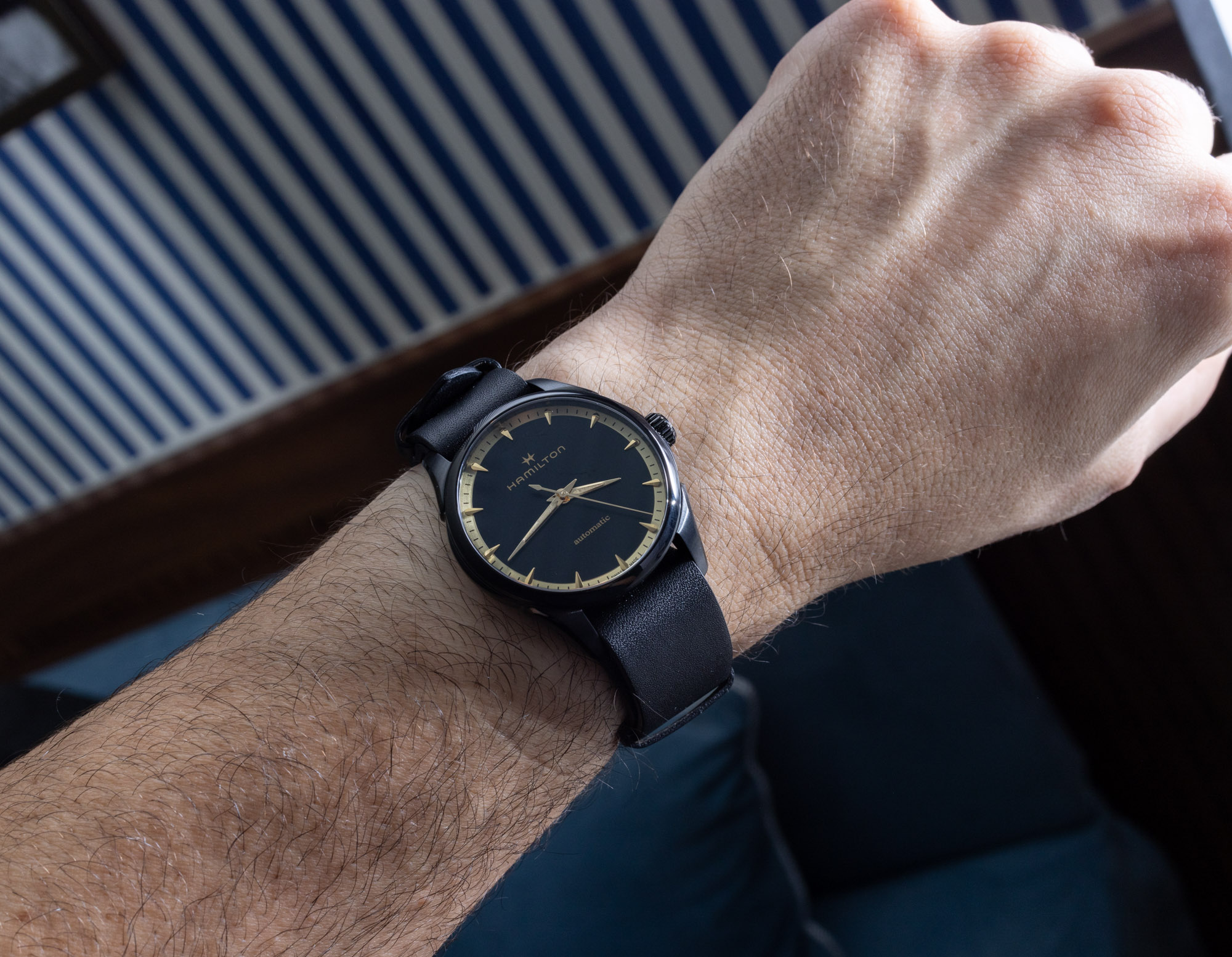 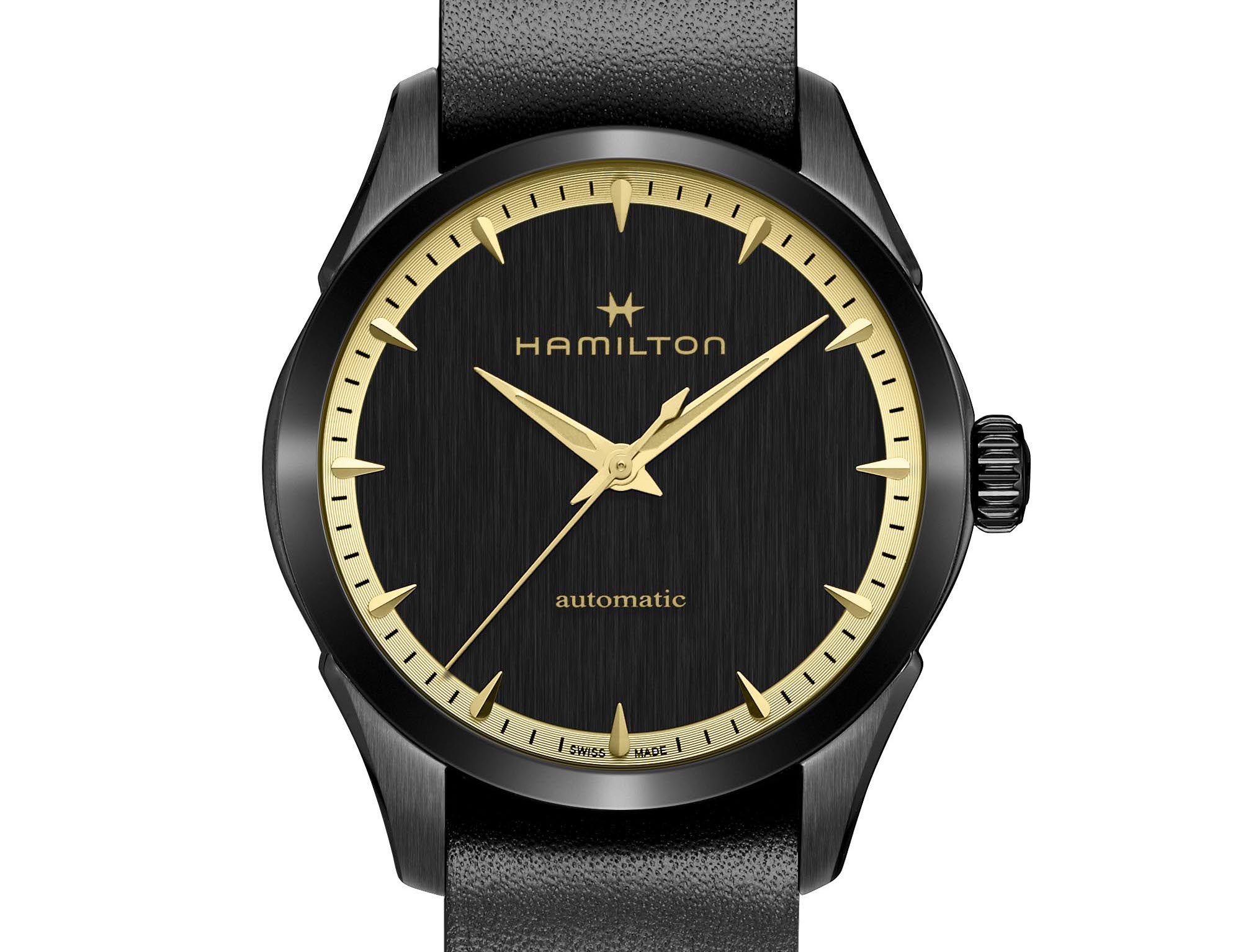 The Hamilton Jazzmaster Auto (reference H32255730) scales things back both in terms of dimensions — coming in at just 36mm-wide and 10mm-thick — and looks — with a wide, vertically brushed dial free from any subdials and superfluous text to get in the way. What appears to be a relatively simple round watch quickly turns into something rather more special, thanks to the style in which the hands have apparently been hollowed out, mirrored by the shape of all 12 hour markers and the beveled drop-shaped lugs. Water resistance is down to 5 bar (50m), enough to protect the H-10 self-winding movement from splashes. Power reserve is 80 hours. 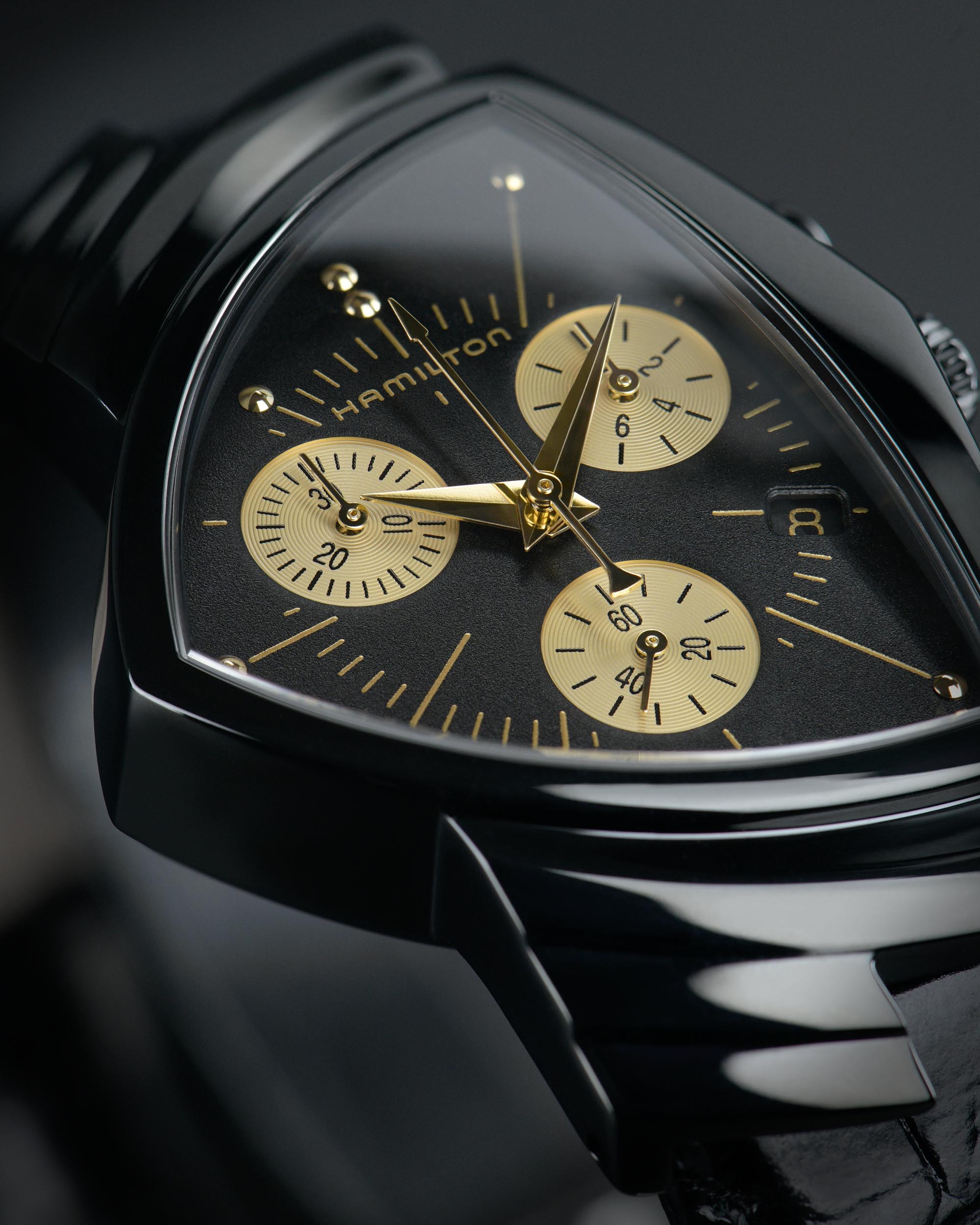 Perhaps the coolest piece in the range is the Hamilton Ventura Chrono Quartz (reference H24402730). Its trademark triangular face and stepped lug structure work extremely well with the dark reflections on the polished black PVD surfaces, while the perfectly round subdials in gold create a connection with rather more ordinary chronographs, serving as a point of visual reference. Some of the best and most lasting among such uniquely styled watches succeed precisely because they don’t go all-out on every element but maintain a few of them in their regular shape and function. The stainless steel black PVD case measures 32.3mm by 50.3mm, so the lug-to-lug measurement is comparable to that of a 42mm round watch — but you probably already know that you have to try the Ventura on to decide whether it’s the right fit for you. 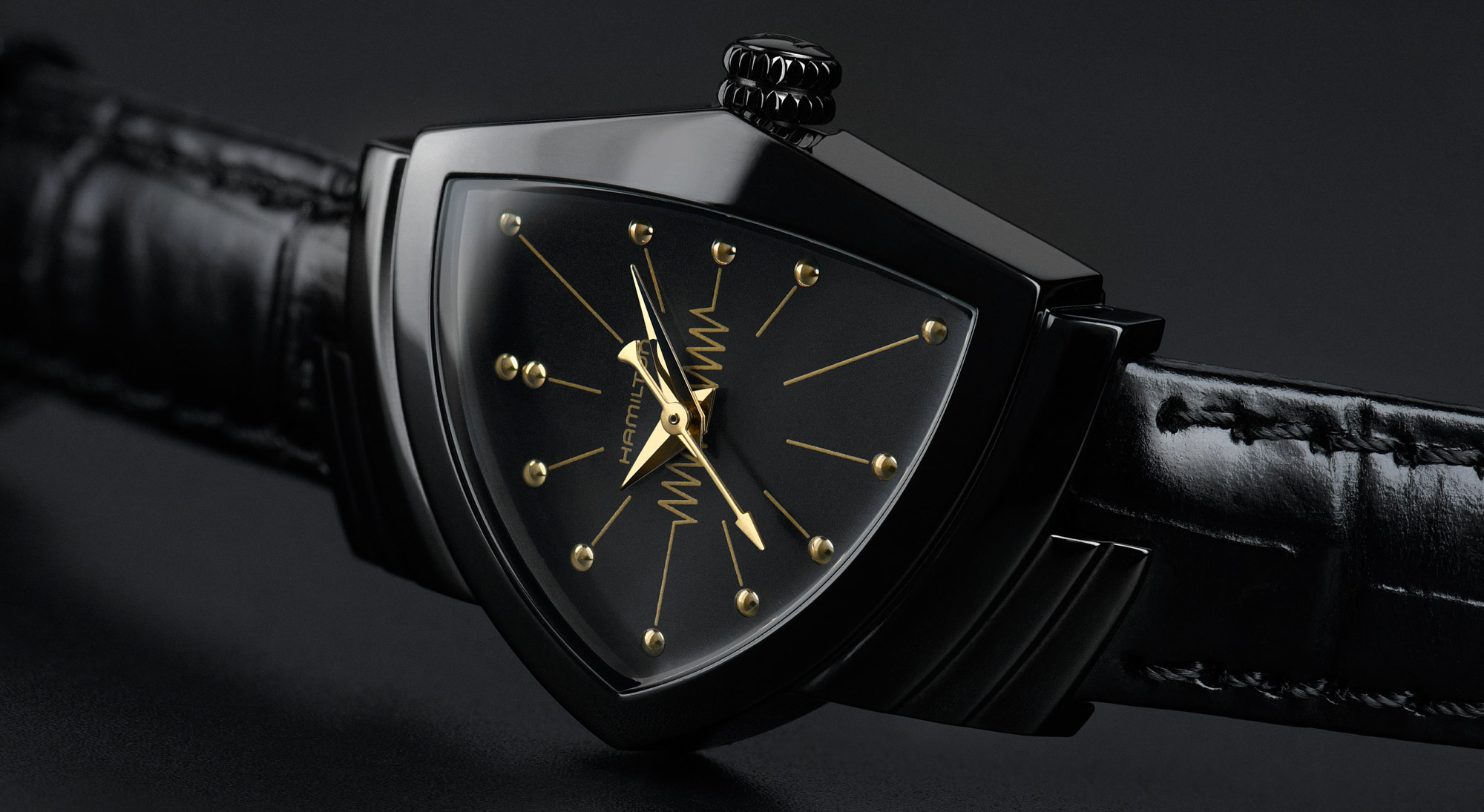 Outlandish designs often look their best in smaller sizes. A case in point is the 24mm by 37.4mm Hamilton Ventura S Quartz (reference H24201730), which is considerably smaller in every dimension than its chronograph counterpart. It’s also almost exactly 3mm thinner than that at just 7.82mm. The reflective golden hands are powered by a quartz movement, as can be expected from a watch of such a petite size. Despite said compactness, the golden hands, hour markers, and decorative lines are there to attract just the right amount of attention. 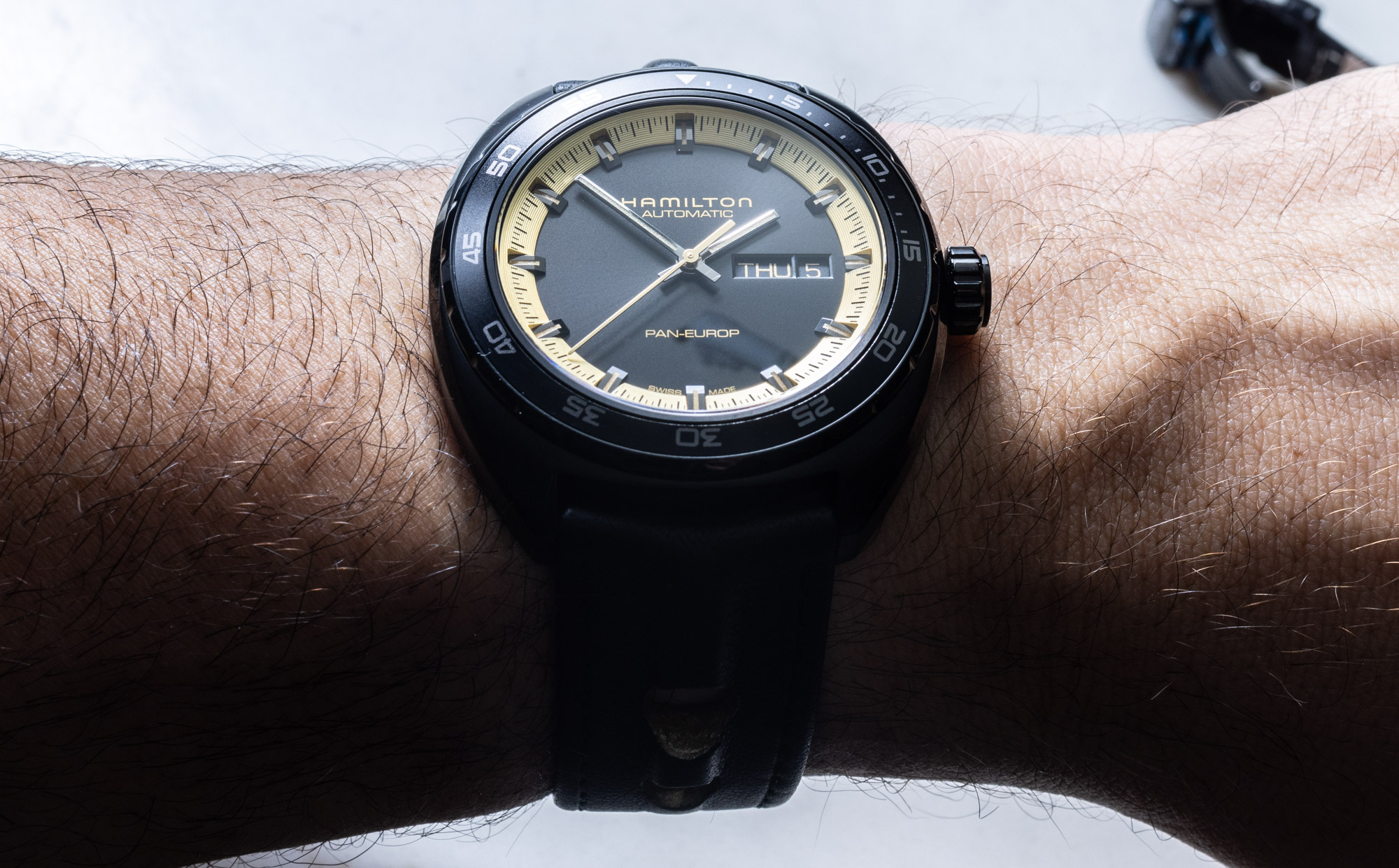 The Hamilton American Classic Pan Europ Black & Gold (reference H35425730) comes with two straps, a bicolor black-and-gold leather strap, and an additional NATO textile strap with gray lines and golden hardware. The modern Pan Europ has been a high-volume watch despite its modest 42mm diameter and comfy 11.55mm thickness. The C-shaped lugs, the wide dial, and the combination of a heavily marked flange ring and timing bezel have all contributed to its elevated presence. The Black & Gold theme looks especially interesting on a watch that has often been styled in a ’70s fashion — this new, limited color palette will likely appear rather more ageless to some than those retro pieces have managed. 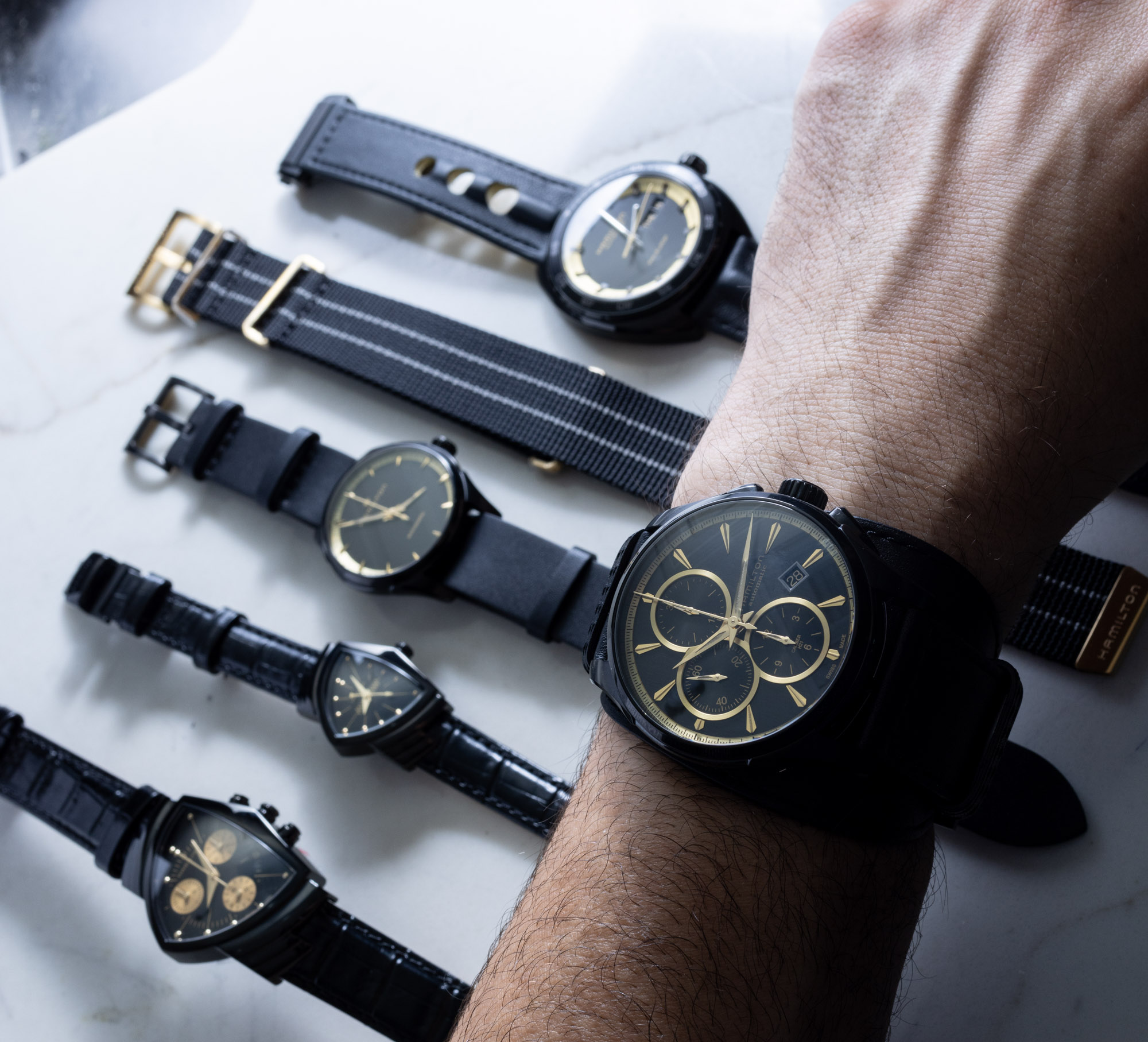