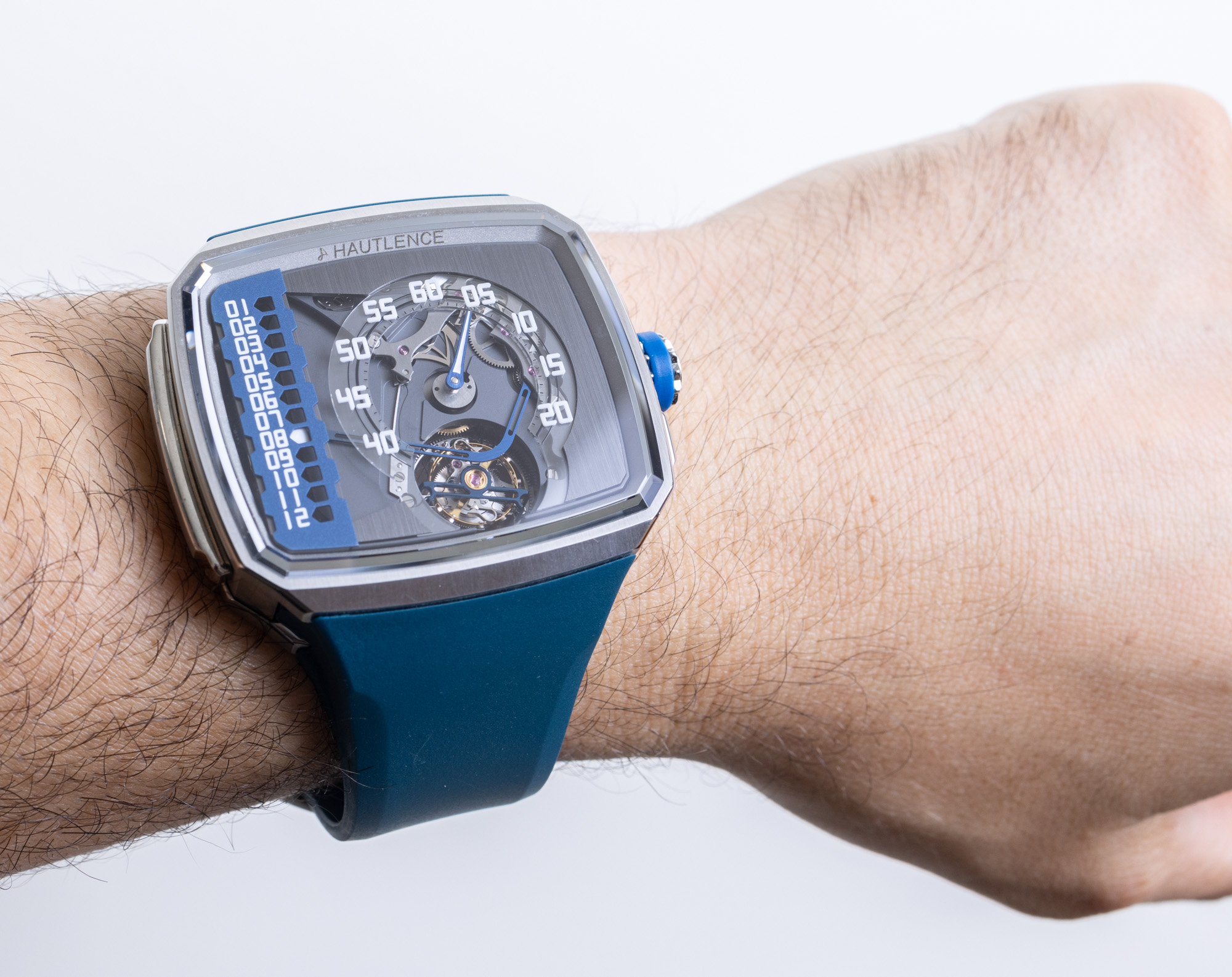 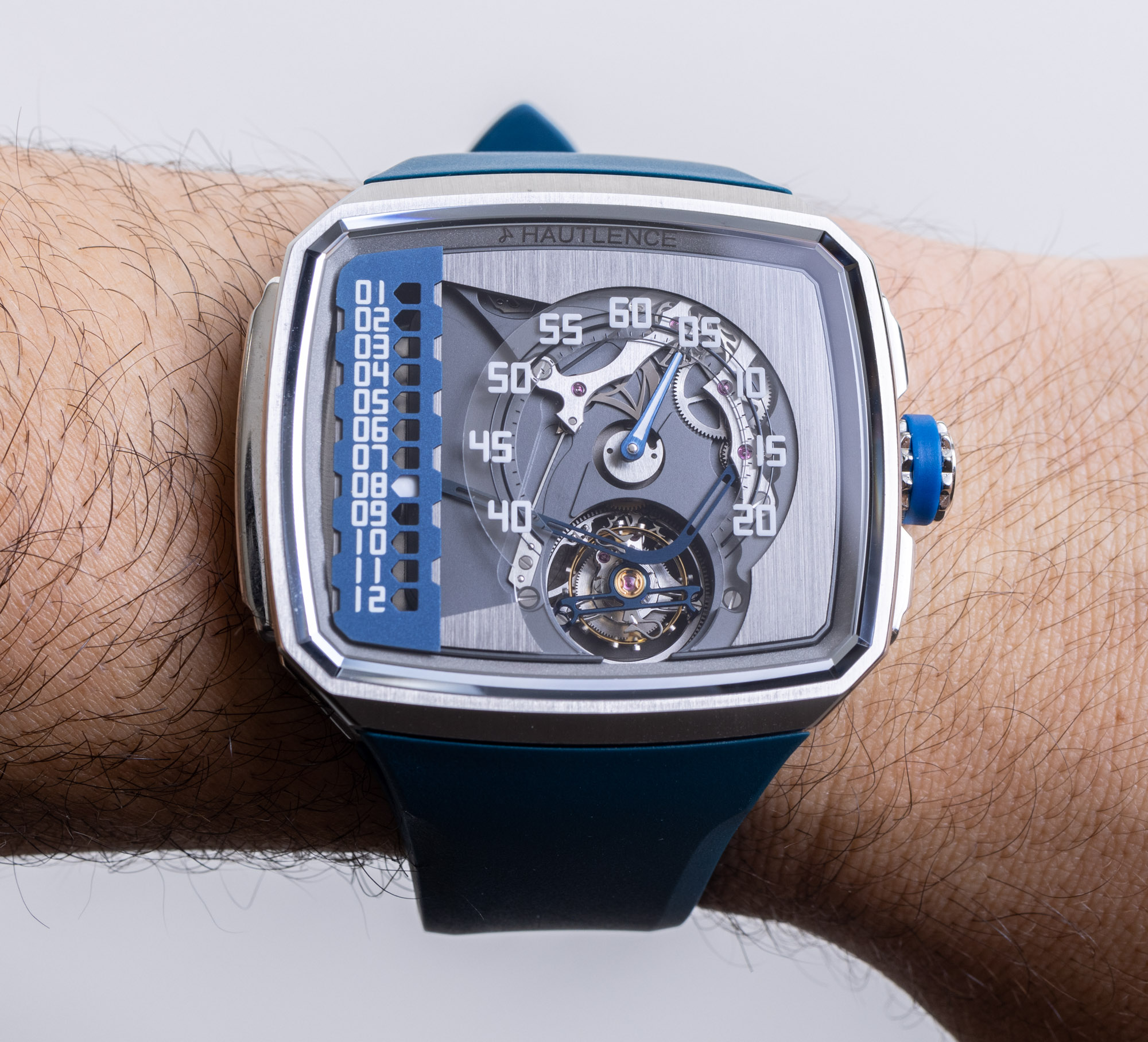 Luxury Swiss watchmaker Hautlence originally debuted in 2004 but over the last few years became quiet as much of the operation seemed to slow down. Owned by the same people who own H. Moser & Cie. in Schaffhausen, Hautlence never actually went away, and today, the company is re-emerging with a fresh look and new leadership. The brand is now under the tutelage of a watchmaker (versus a business person), and I think that decision makes a lot of sense for a brand such as this. I have yet to correspond with him, but in the near future, I look forward to interviewing Mr. Samuel Hoffman, who was recently appointed as the brand leader earlier in 2022. For now, let’s take a hands-on look at one of the brand’s new limited-edition pieces: the Hautlence Linear Series 1, which includes a form of jumping hour mechanism, as well as a flying tourbillon.

Let’s start by talking about the movement, since pretty much all Hautlence watches will have novel displays of the time and focus on those kinds of eccentric takes on traditional mechanical watchmaking. The Linear Series 1 has a movement that will, no doubt, make it into future Hautlence watches known as the caliber D50. The movement is made in collaboration with Geneva-based Aghenor and combines a distinctive time display with automatic winding and a flying tourbillon-based regulation system. The tourbillon system looks very much like those in H. Moser & Cie. watches, so I don’t think that Aghenor makes all of the movement. Rather, I believe that the specialist company is probably most involved in the time display system, which is built on a base that Hautlence’s industrial base is able to produce. 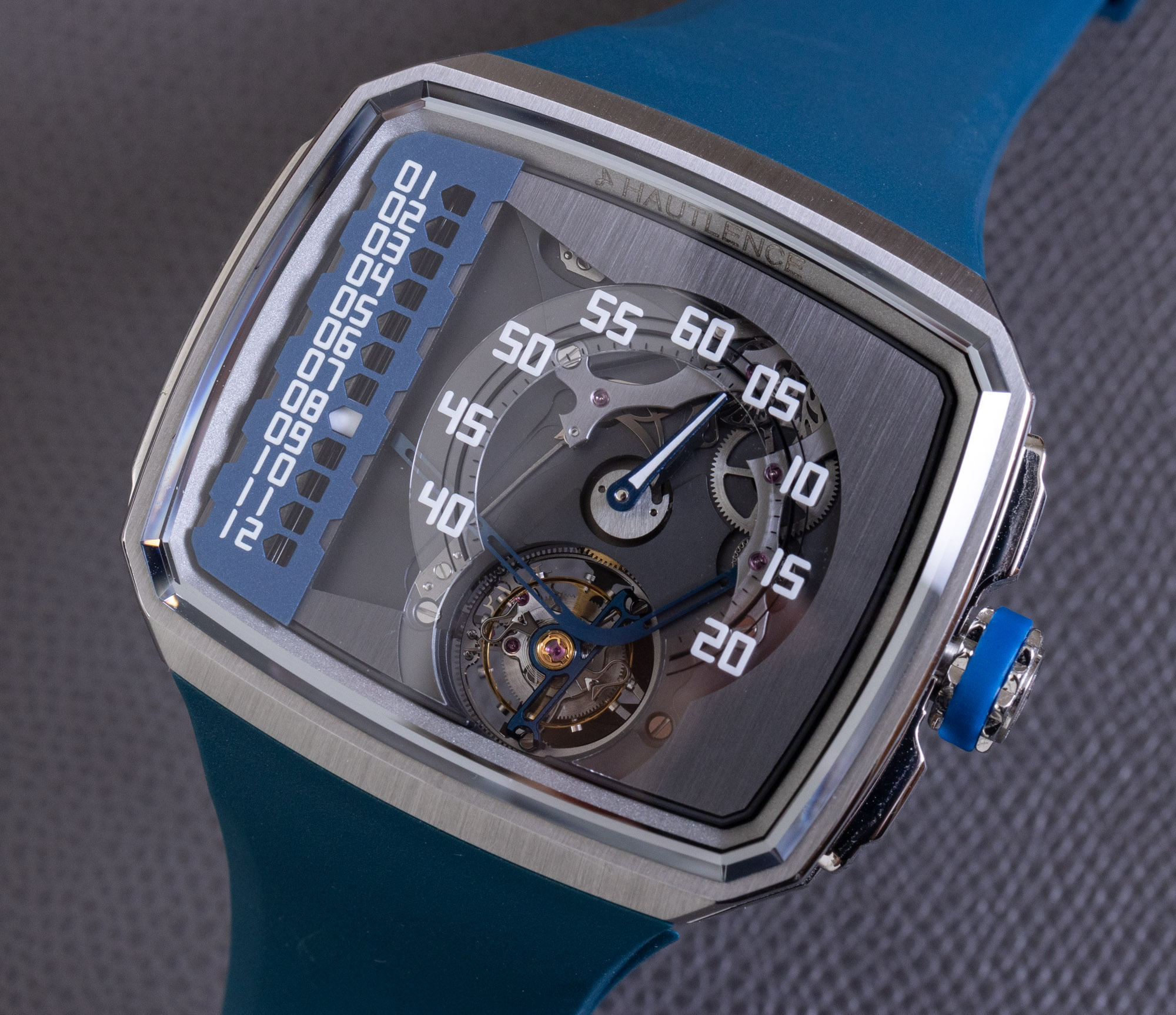 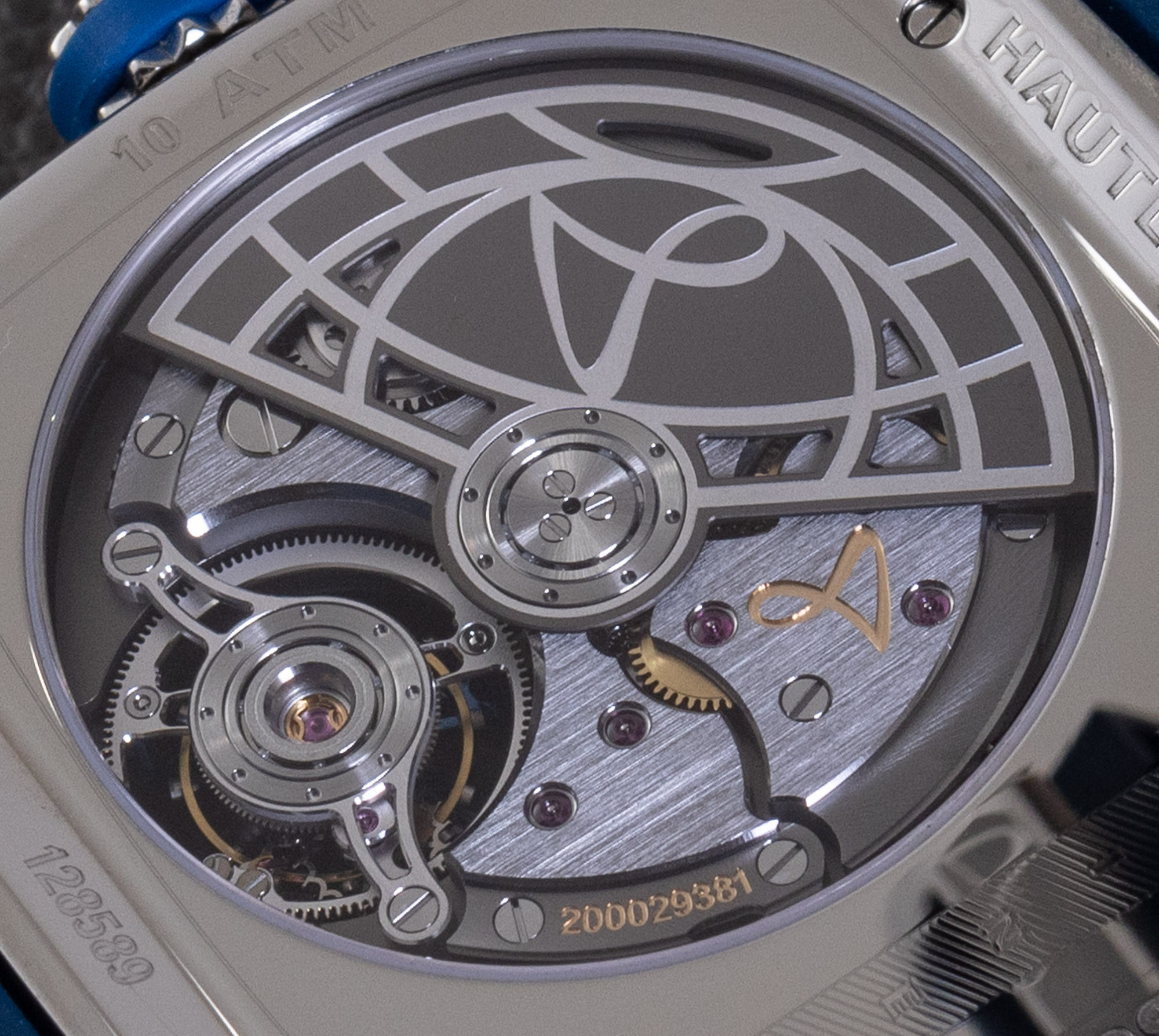 The D50 movement is an interesting system and benefits from not having to be too compact, making some of these more vivid display concepts possible. The movement comprises 239 parts and operates at 3Hz with a power reserve of 72 hours. You can see part of the movement and the large automatic rotor through a sapphire crystal window on the caseback. On the front, time is displayed via hours and minutes, while seconds are indicated via the spinning tourbillon. While the Linear Series 1 dial indicates the minutes in a relatively traditional fashion via a circular dial, is it the jumping hours mechanism where things get interesting, and reveals how this model hearkens back to the original Hautlence concept from nearly two decades ago. Hours are indicated vertically via a linear jumping marker scale. A small white marker sits next to the current hour it is indicating, and then jumps to the next full position when the hour changes. You can view the blued steel arm that moves the marker through the center of the dial, which, of course, moves up and down across the course of the day.

I very much like the dial layout and how the minutes are indicated on a separate sapphire crystal semi-circle ring that has legible white minute markers on it. It does, however, bother my eyes a little bit that no markers exist for nearly 1/3 of the ring where the tourbillon window is located. I feel as though much of the same visual effect would be achieved if the transparent disc was also over the tourbillon window. Gone are the days when tourbillon mechanisms are as important and exotic as they once were, and I feel that in the interest of how much the watch hobbyist community values horological effectiveness, it might have been a wiser move for Hautlence to implement a full minute-marker display. Perhaps that will show up in the Hautlence Linear Series 2 or Series 3. 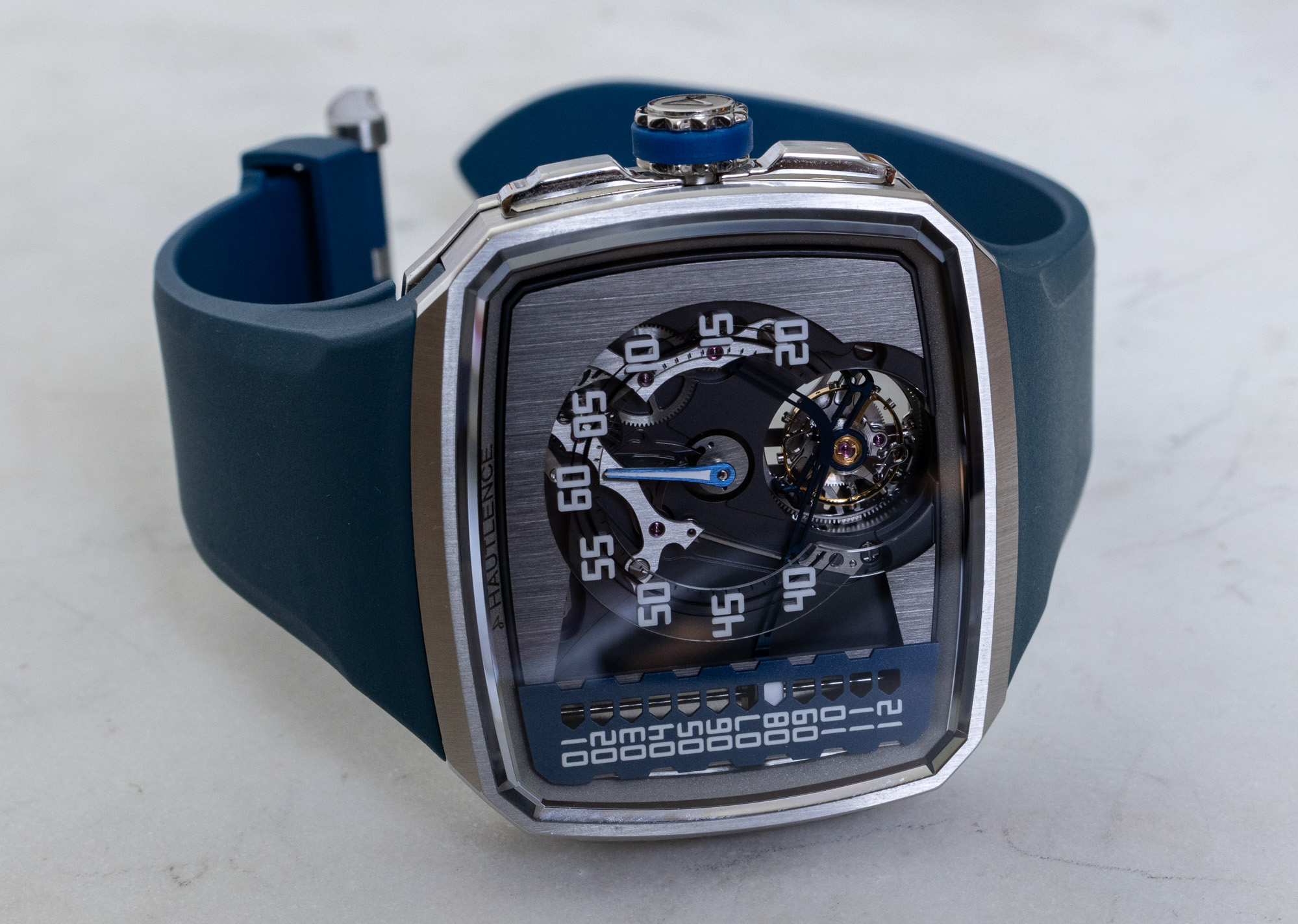 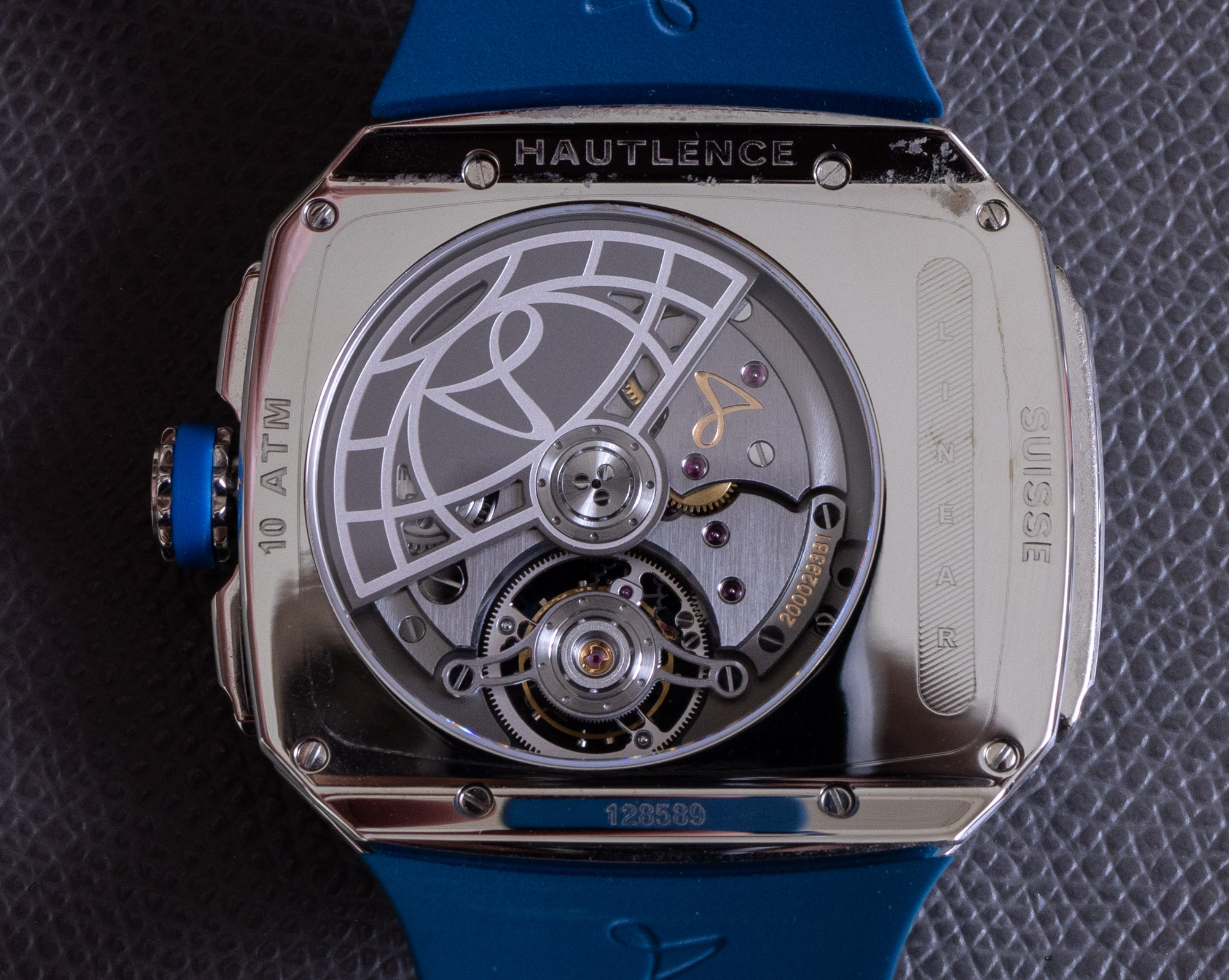 Another feature that typified past Hautlence watches is a “TV screen-style” case shape. That is back, too, but in a more modernized form that ends up being quite comfortable on the wrist. The steel case is quite wide at 50.8mm, but isn’t too “tall” at 43mm lug-to-lug. The case is also 11.9mm-thick and feels quite thin on the wrist (all things considered). I applaud the 100 meters of water resistance and the use of a nicely shaped sapphire crystal over the dial with beveled edges. Even though the case is rather wide, it still has trendy “side flanks,” which look like a minute repeater slider on the left side of the case but is just a decorative element.

On the wrist, the heft of the Hautlence Linear Series 1 isn’t too bad if you wear it snugly against your body, which is possible with the very high-quality integrated rubber strap (here colored blue). But the strap was a bit long for me, and I wasn’t able to get a secure fit. Hautlence probably has shorter straps for people like me with smaller wrists, so be sure to ask the company about that if you are interested in this piece but worried about ensuring a good fit. 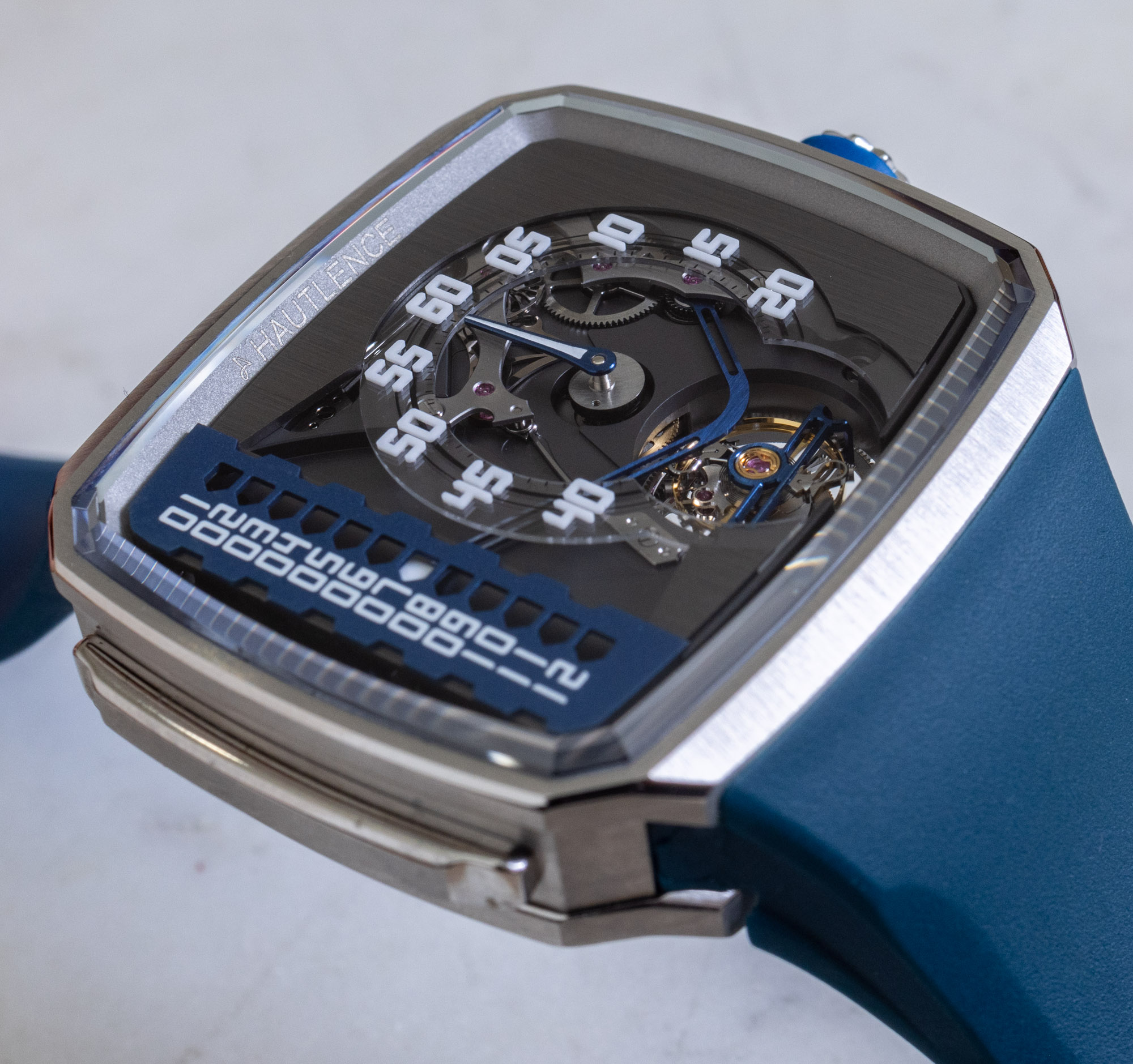 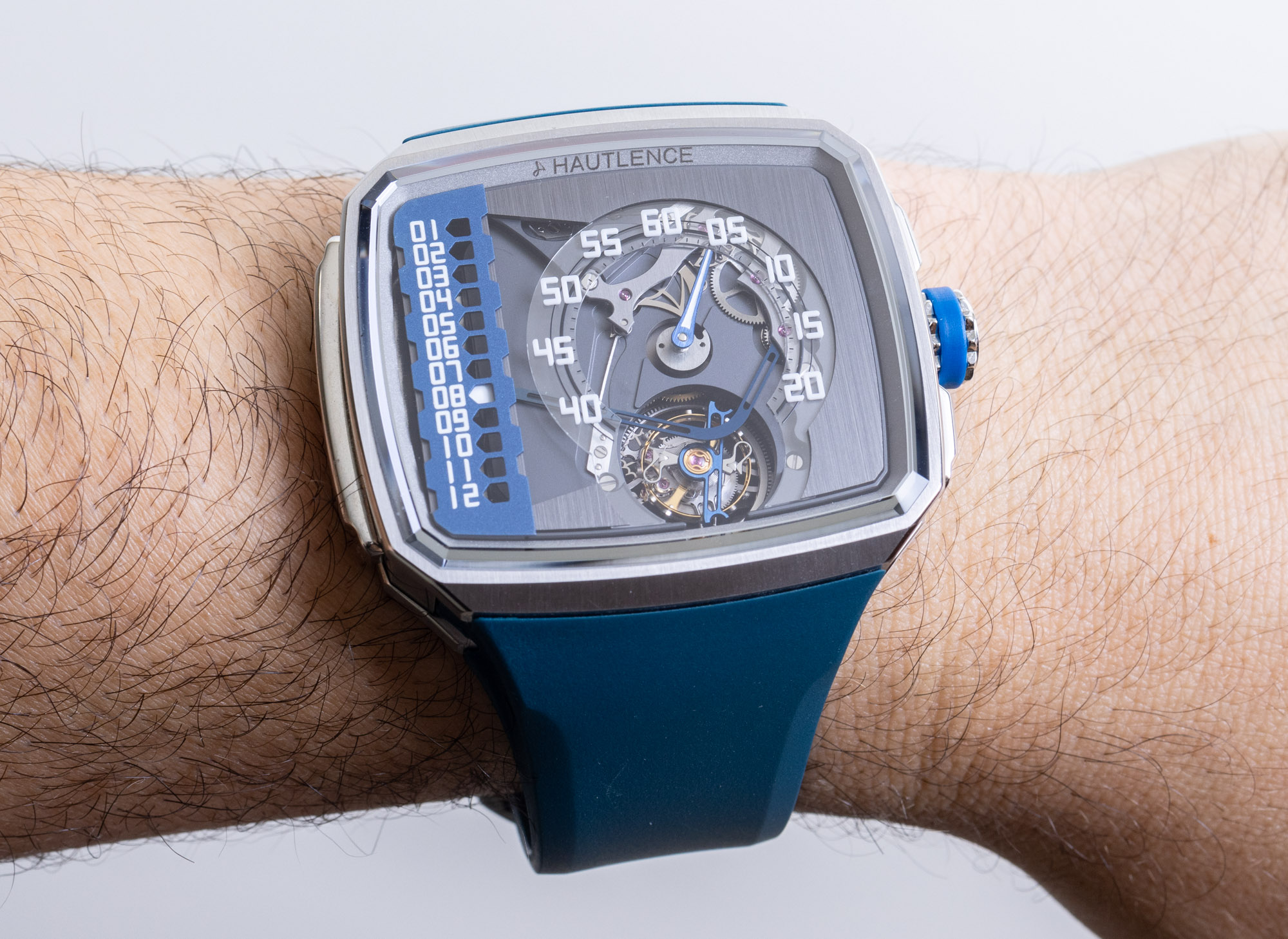 It is good to see Hautlence back on the scene with some updated brand character. The company was always trying to be the most modern/futuristic face of H. Moser & Cie, and it will be interesting to see how it develops. I presume, for the time being, most of the watches will remain higher-end and exotic. It feels a bit like when Angelus relaunched under La Joux-Perret. I look forward to seeing the trajectory of where the high-end Swiss brand is going today. This particular version of the Hautlence Linear Series 1 is known as the reference AD50-ST00 and is a limited edition of just 28 pieces. Retail price is $64,900 USD.  Learn more at the Hautlence watches website here.