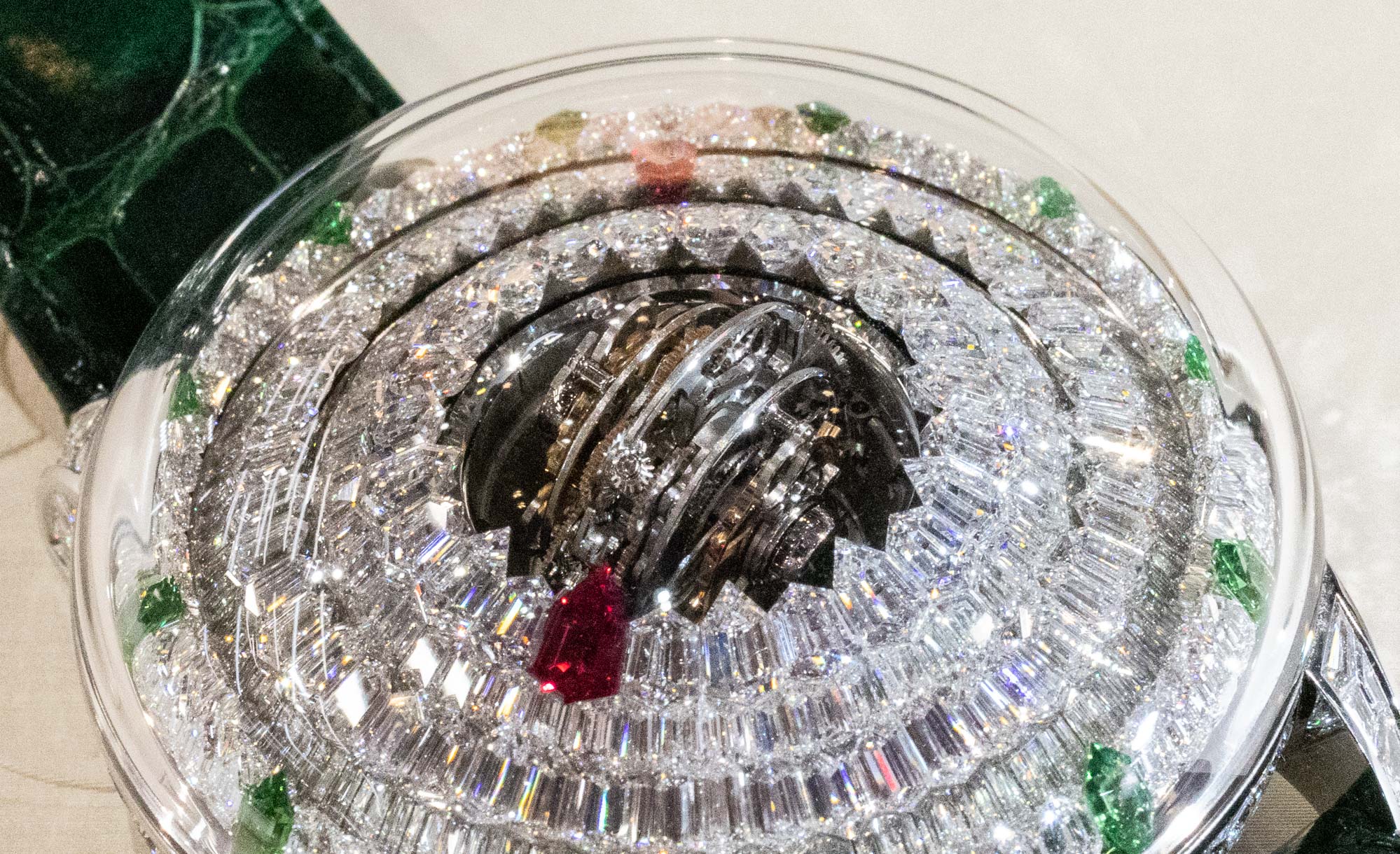 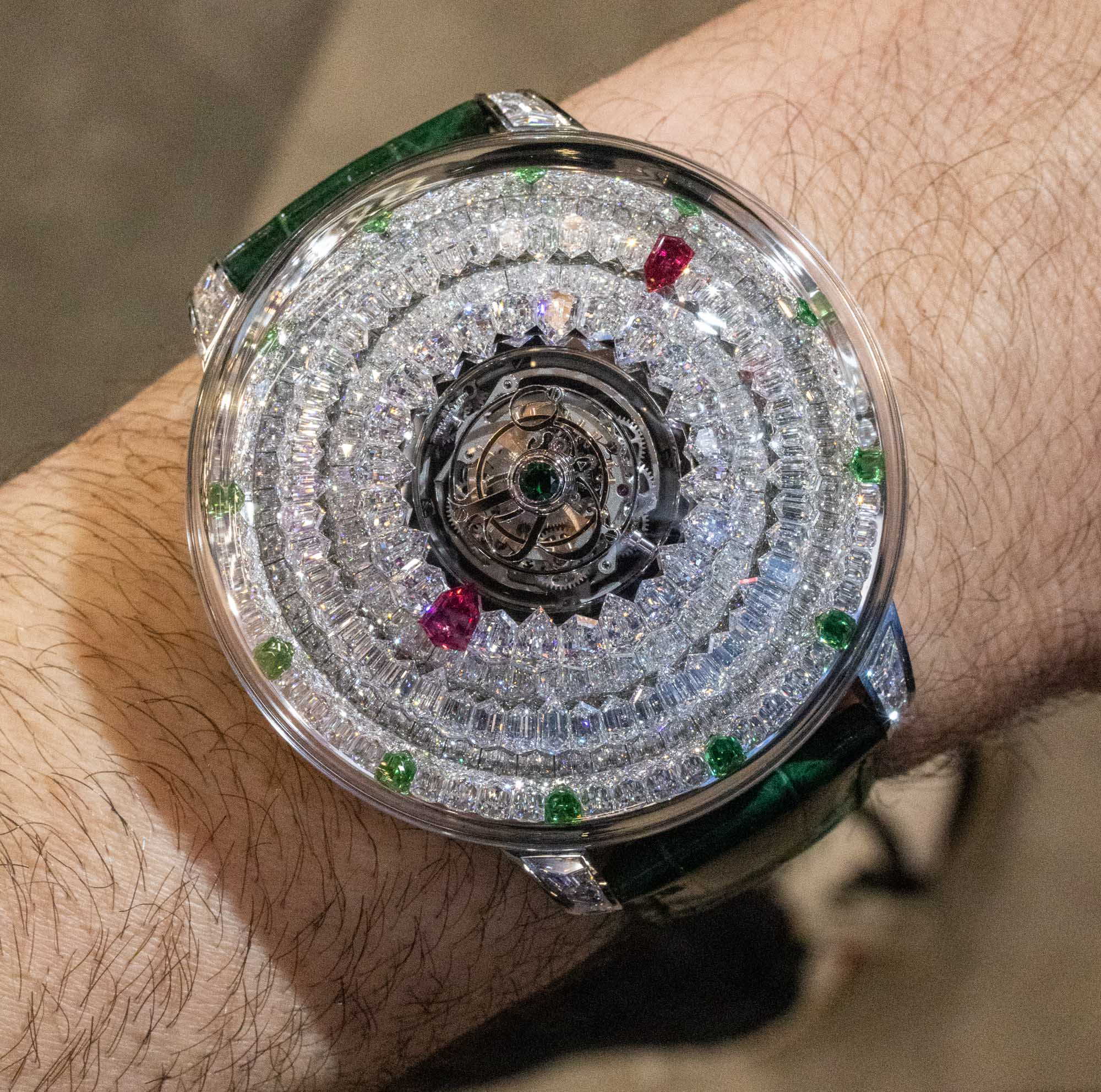 One of the things I have come to realize about Jacob & Co. after writing about the brand all these years is that part of their genius is treating precious materials like they are everyday watchmaking materials. Understanding that philosophy goes a long way in offering a practical explanation for how something like The Mystery Tourbillon watch even gets imagined in the first place. Did someone say, “How can we put as many diamonds on the dial as on the case?” Maybe, but probably not. I am pretty sure the origin story of this watch focused on the triple-axis centrally mounted tourbillon and then built out from it. Jacob & Co. is known for prompting its designers to lavishly appoint products with diamonds and other precious stones as often as possible. Why? It’s not because Jacob & Co. has a diamond mine whose existence needs justification, but rather because the brand’s customers demand products that outshine the rest. Jacob Arabo and his team are masters at this, and it is because they pull no punches when it comes to idea execution. Maximum diamonds or no diamonds at all is the only way.

While much of the appeal of The Mystery Tourbillon is in the high-jewelry object status, from a technical perspective, there is plenty for even the most conservative horological enthusiast to appreciate. The Swiss Made movement inside the watch is known as the Jacob & Co. caliber JCAM32. It is manually wound with 60 hours of power reserve operating at 3Hz (21,600 bph). It is comprised of a rather intensive 430 components. Now, things start to get interesting. The center of the watch is fitted with a centrally mounted triple-axis tourbillon. While there are some central (in the middle of the dial) tourbillon watches on the market, their technical development costs make them rare finds even in today’s crowded market. Rather than just a single-axis 60-second tourbillon, The Mystery Tourbillon includes two additional axis rotation points that turn once every three minutes. This makes for an interesting motion that is ongoing, but also not too rapid and frenetic. The tourbillon cage has a Jacob & Co. logo, and, in the center of the company name fits a nice little emerald end-stone. (A. Lange & Sohne does this on its most-elite watches with a diamond setting.) 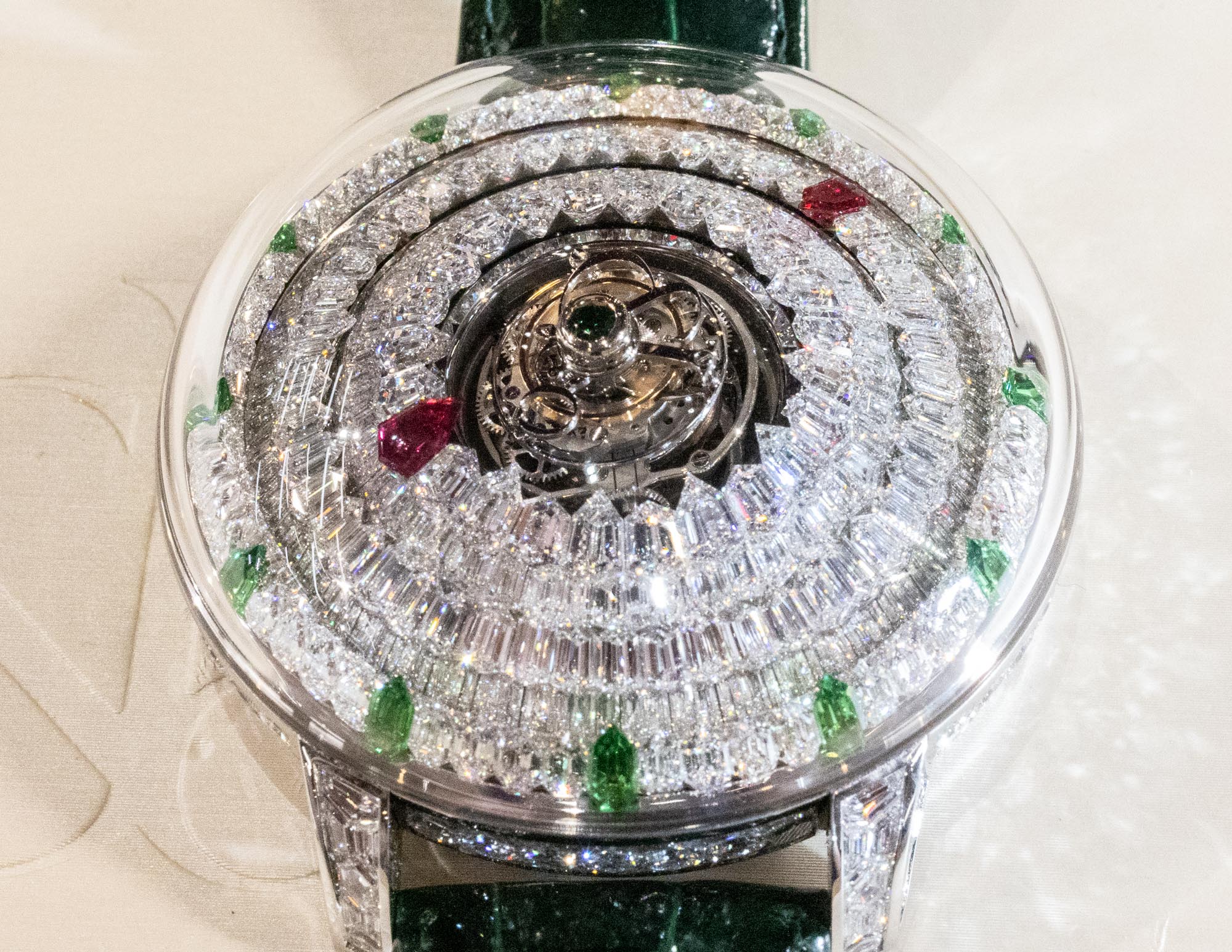 Time is indicated around the periphery of the central three-axis tourbillon display via not mere hands but rotating discs. The discs are seemingly mounted at a slight diagonal angle, and on them are set rows of rather large baguette hexagonal diamonds. The design is meant to have the diamonds overlap with each other, making the dial of the watch look like a wrist-worn version of a Swiss tunnel boring machine. Funny enough, I bet the tunnel boring machine wished it was equipped with as many diamond drilling bits as are on The Mystery Tourbillon wristwatch. According to Jacob & Co., the hour and minute rings each have 119 diamonds set on them, while an outer ring has another 109 diamonds. Of course, there are two rubies that serve as the hour and minute hand arrows, and finally, the 12 tsavorites which are used as hour markers on the outermost ring. 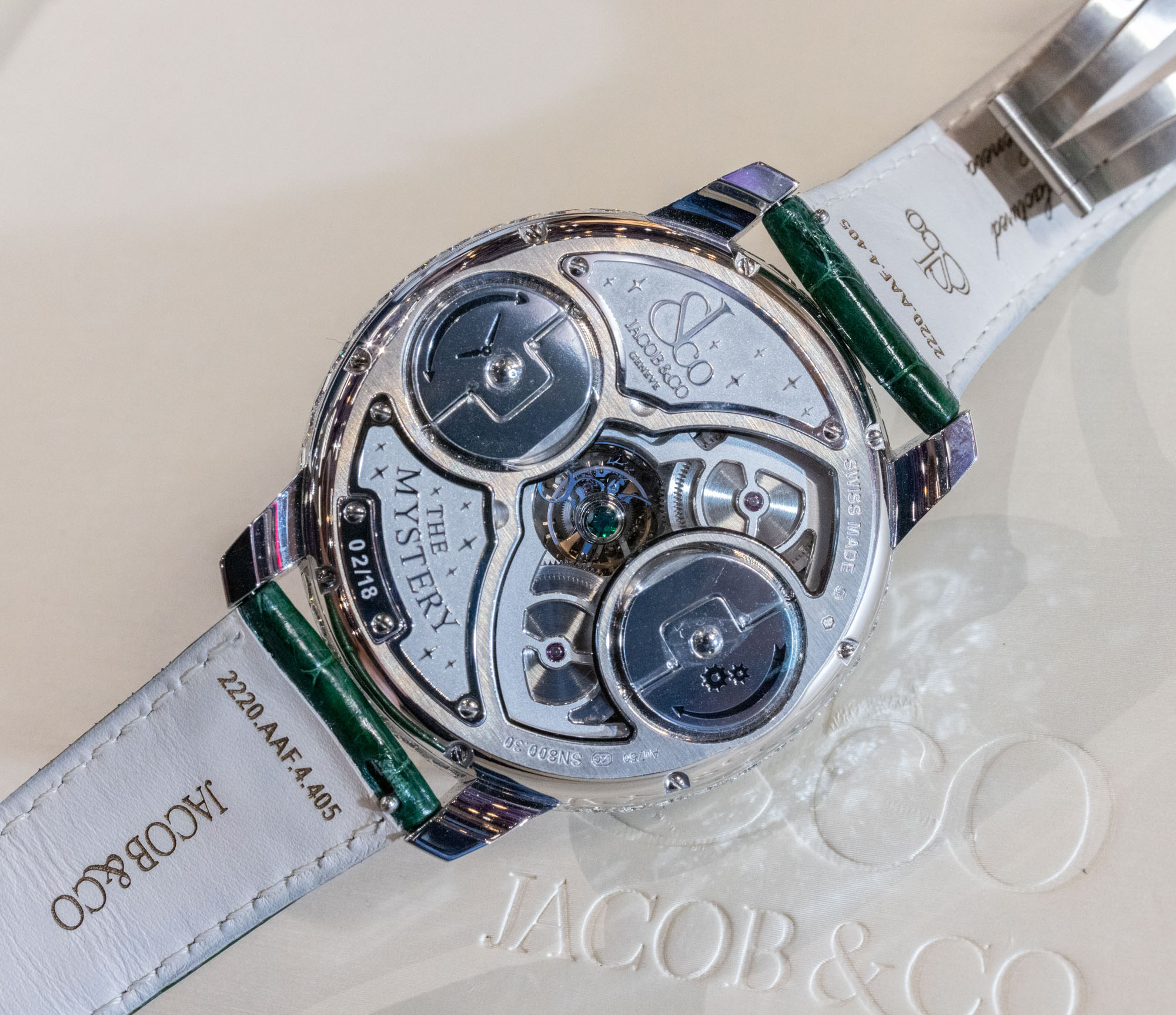 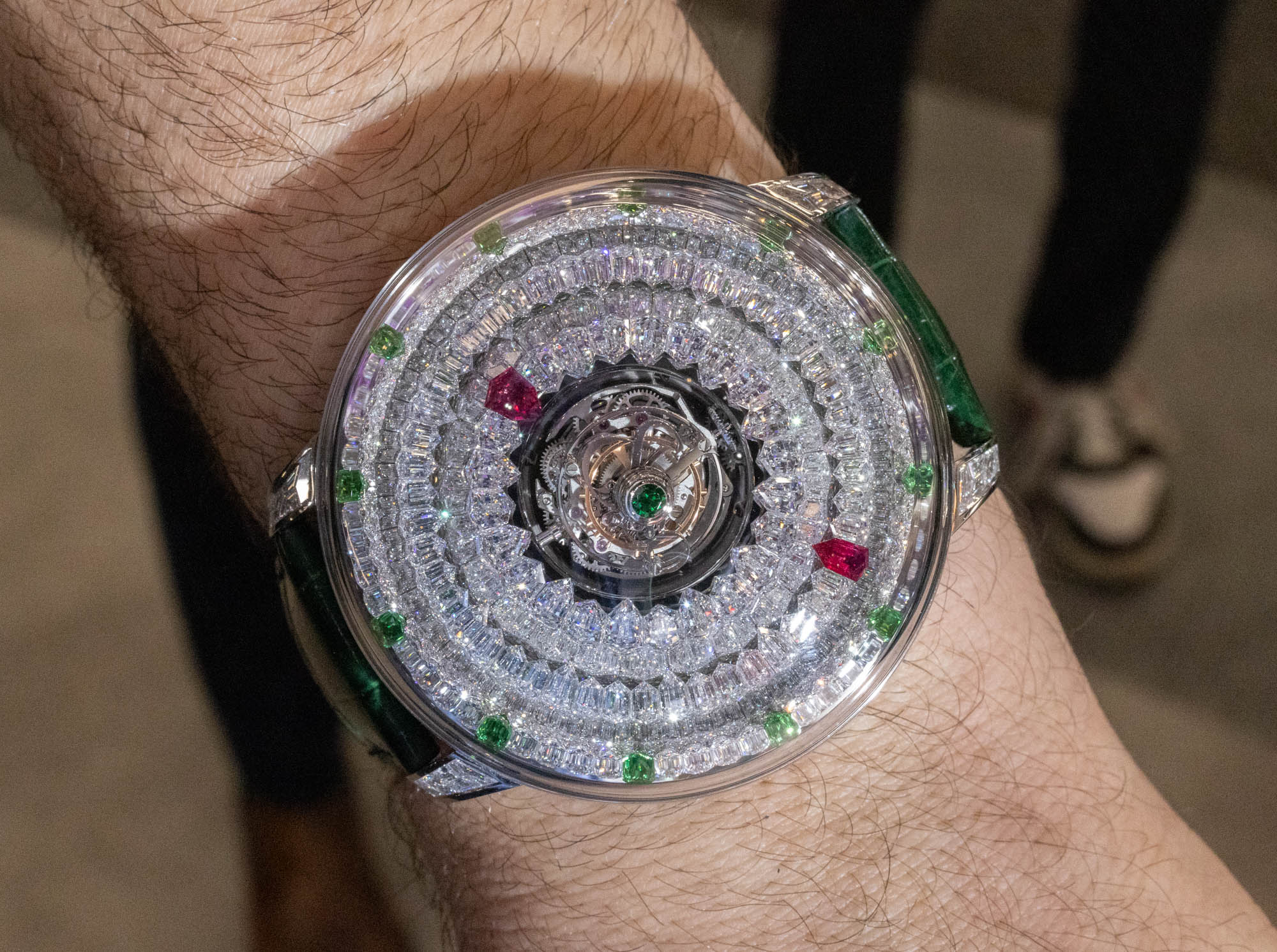 Even though the case is 50mm-wide and 22.75mm-thick, The Mystery Tourbillon is wearable thanks to its shorter lugs and rounded case edges. The case is water resistant to 30 meters, and over the dial is a very large and rounded (yet remarkably clear, thanks to a good AR-coating) sapphire crystal. This is a crucial element because an unobstructed via of the already sparkling main dial is essential in making a dial animation such as this successful in terms of a “wowing” visual experience for consumers.

Jacob & Co. has produced a few The Mystery Tourbillon watch versions, each very limited in production. The Mystery Tourbillon Tsavorites reference SN800.30.BD.AB.A is a limited edition of just 18 pieces, and it comes on a lovely green alligator strap with a matching 18k white gold and diamond-decorated deployant clasp. I found it hard to fault this watch for anything because it executes the central triple-axis tourbillon theme it was going for very well. That the watchmakers were able to do all that with so many diamonds in the way is simply another layer of impressiveness. If I could afford it, I would totally wear this watch regularly. Price for the Jacob & Co. The Mystery Tourbillon Tsavorites watch is $1,300,000 USD. Learn more at the Jacob & Co. website here.