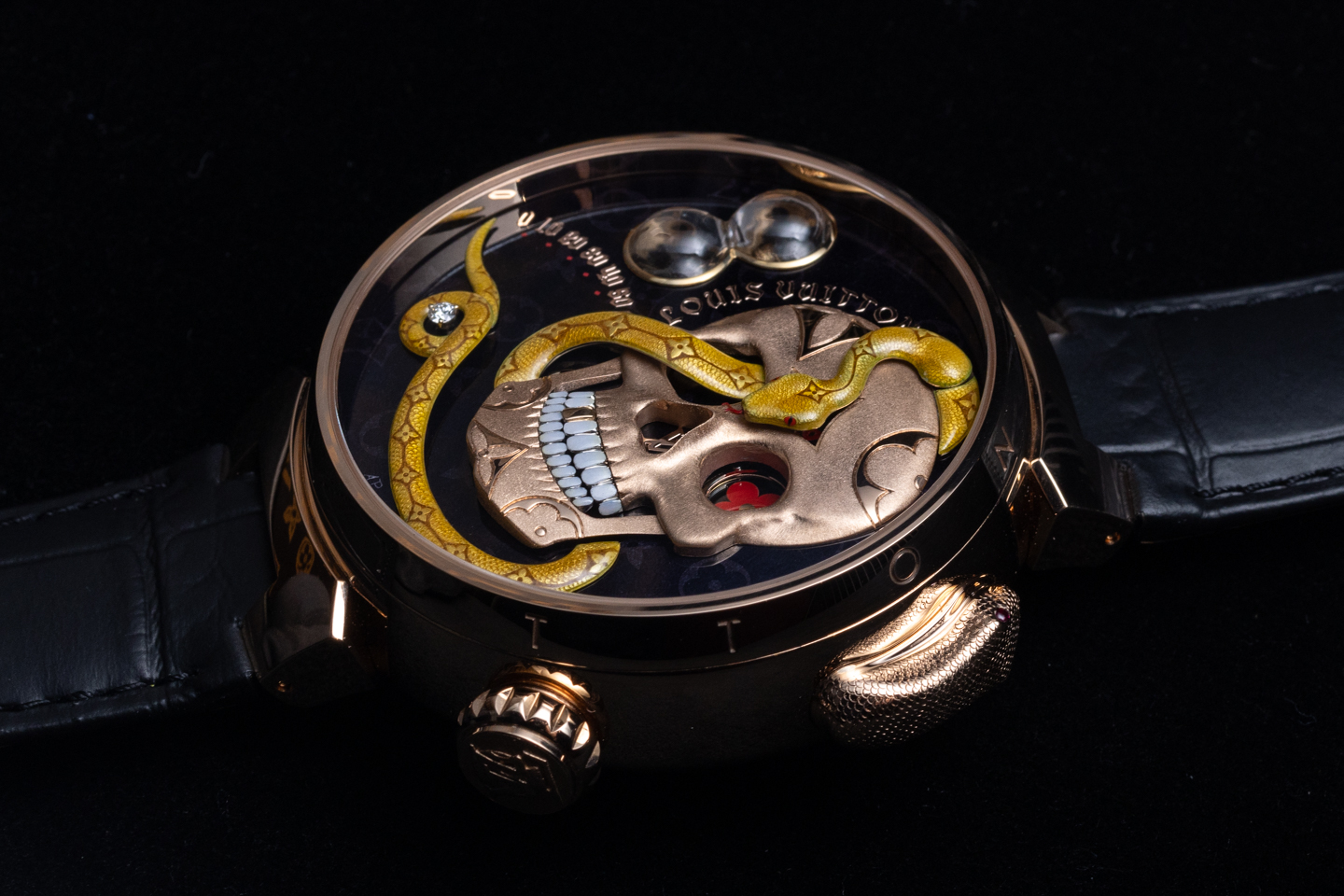 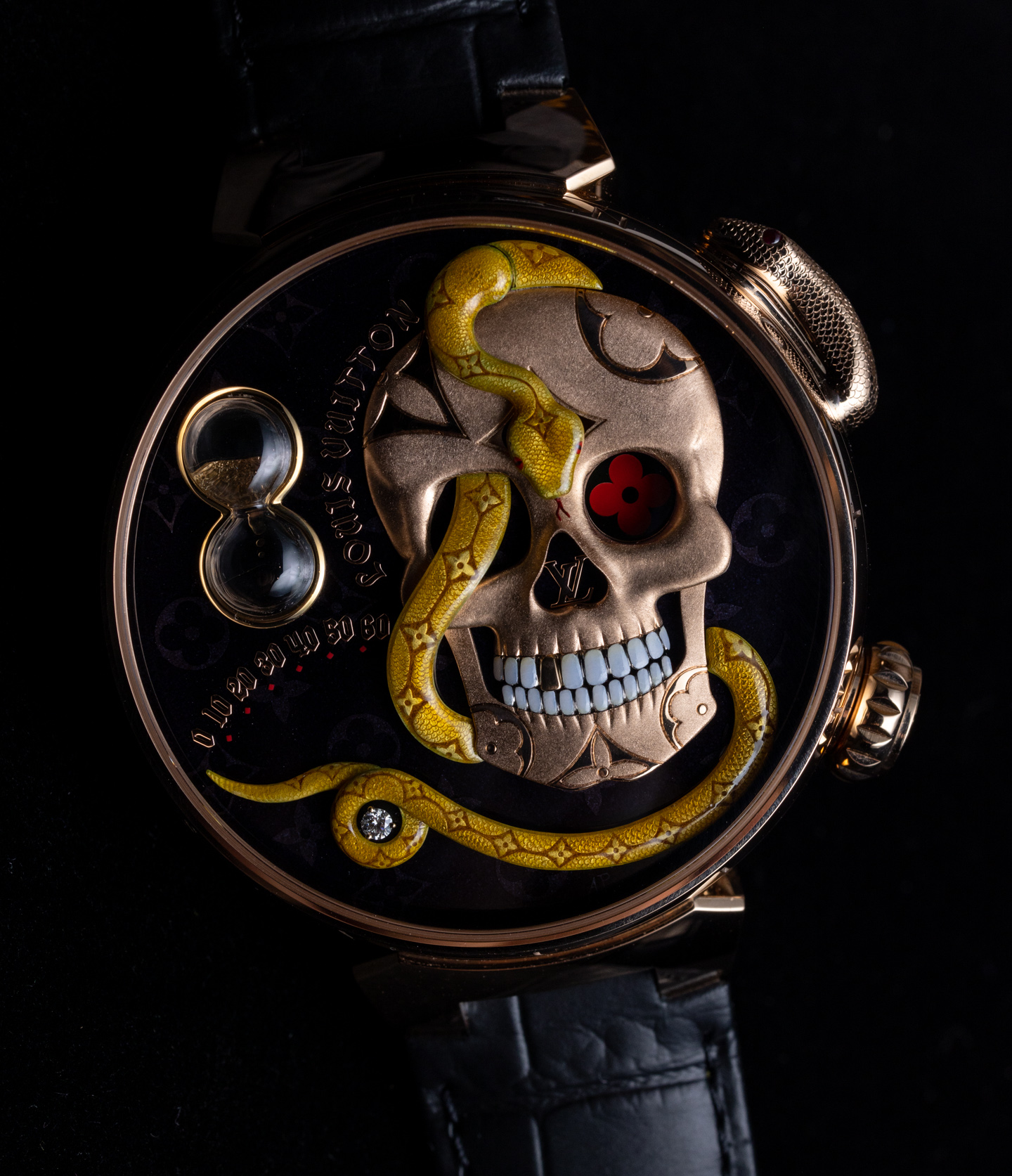 There is no denying that the Tambour Carpe Diem timepiece from Louis Vuitton is an exotic luxury item. Less than 30 examples of this automata-equipped mechanical watch will ever be made, and even then, new pieces will only trickle out of the exclusive La Fabrique du Temps manufacture in Geneva where they are made given the time and effort required just to assemble them. The 426-part in-house made and developed movement alone requires about two months to decorate and assemble — and that is after the parts themselves are manufactured. Of course, there is also the hand-engraving and hand-painting on the dial, which represents additional hours that a master craftsperson needs to complete one Tambour Carpe Diem watch. What exactly is this high-end novelty watch all about, and how does it fit within the grander picture of the Paris-based Louis Vuitton brand?

When Louis Vuitton started to get serious about making prestigious watches in the early 2000s, it started to work with some of Switzerland’s most important watchmakers and suppliers. Even though the Louis Vuitton brand is based in Paris, France, the company’s watchmaking arm is, in large part, a separate division. Like other fashion houses that have dabbled in watchmaking, Louis Vuitton has experimented with a large number of price points and styles when it comes to its timepieces. That said, an important part of the maison’s watch division is about creating spectacular one-of-a-kind treasures for the brand’s most elite group of VIP consumers.

In that sense, Louis Vuitton operates much like also Paris-based Cartier, Dior, and Chanel, where mainstream luxury products are supplemented with bespoke ultra-high-end luxuries at the top. Thematically speaking, Louis Vuitton’s most elite watches have actually also been among its most playful. Part of this is due to the core personality of the brand and also because most of its exotic watches continue to be secret from the public, made exclusively to order for special customers. Louis Vuitton doesn’t sell through third-party retailers and, even in its many shops, you’ll only find a handful of the most serious high-end watches available on display. Rather, most of the top-tier products are either sold via small VIP group events or directly on order to customers who hire one of the world’s most important luxury brands to produce something exceptional for them.

It is out of this context that the Carpe Diem watch emerges from the shadows. Using a super-sized 46.8mm 18k pink-gold version of the popular Louis Vuitton Tambour case, the Carpe Diem is probably the first “public” version of the secret high-complication watches the brand’s Swiss facility produces. It’s wild, it’s weird, it’s artistic, and it’s just the type of oddity that gets the blood pumping for some members of Louis Vuitton’s demanding VIP clientele. 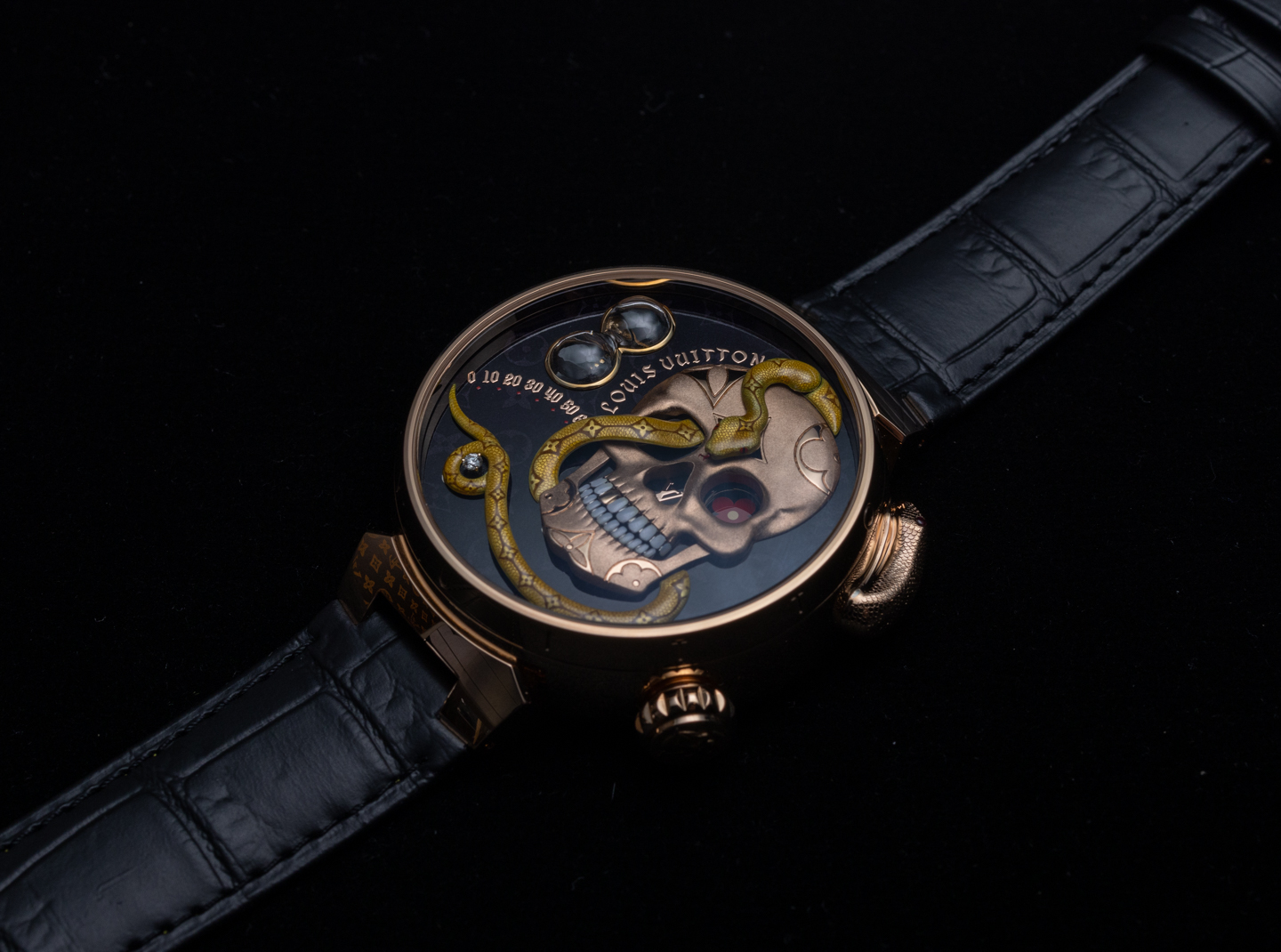 Around 2011, Louis Vuitton fully acquired La Fabrique du Temps, which is the epicenter of all the brand’s watchmaking activity. Equipped with designers, engineers, watchmakers, and craftspeople, La Fabrique du Temps is staffed by masters of their craft who specialize in some of the most important and most complicated modern wristwatches of our modern era. Michel Navas, who co-founded the facility and who began as a supplier for Louis Vuitton, worked with a large assortment of companies, including Audemars Piguet, BNB Concept, Franck Muller, and alongside the late Gerald Genta with his eponymous brand that’s hyper-focused on complicated tourbillons, minute repeaters, and other musical grand complication watches. This fact, alone, helps explain why Louis Vuitton’s most prestigious watches so commonly feature minute repeaters and tourbillons, or both.

The Tambour Carpe Diem is Louis Vuitton’s take on the classic “memento mori” theme, an artistic and emotive concept that is meant to inspire the wearer to “live” as a function of reminding them about their death. “Memento mori” more or less translates into “remember you will die,” and the implication is that with such a fact in mind, you will make the most out of your remaining time alive. While not popular in all cultures, vestiges of the strength of the memento mori message remain in fashion and, of course, watchmaking as a function of the beguiling popularity of the skulls. In a sense, most “skull watches” are adapted from memento mori-style imagery. 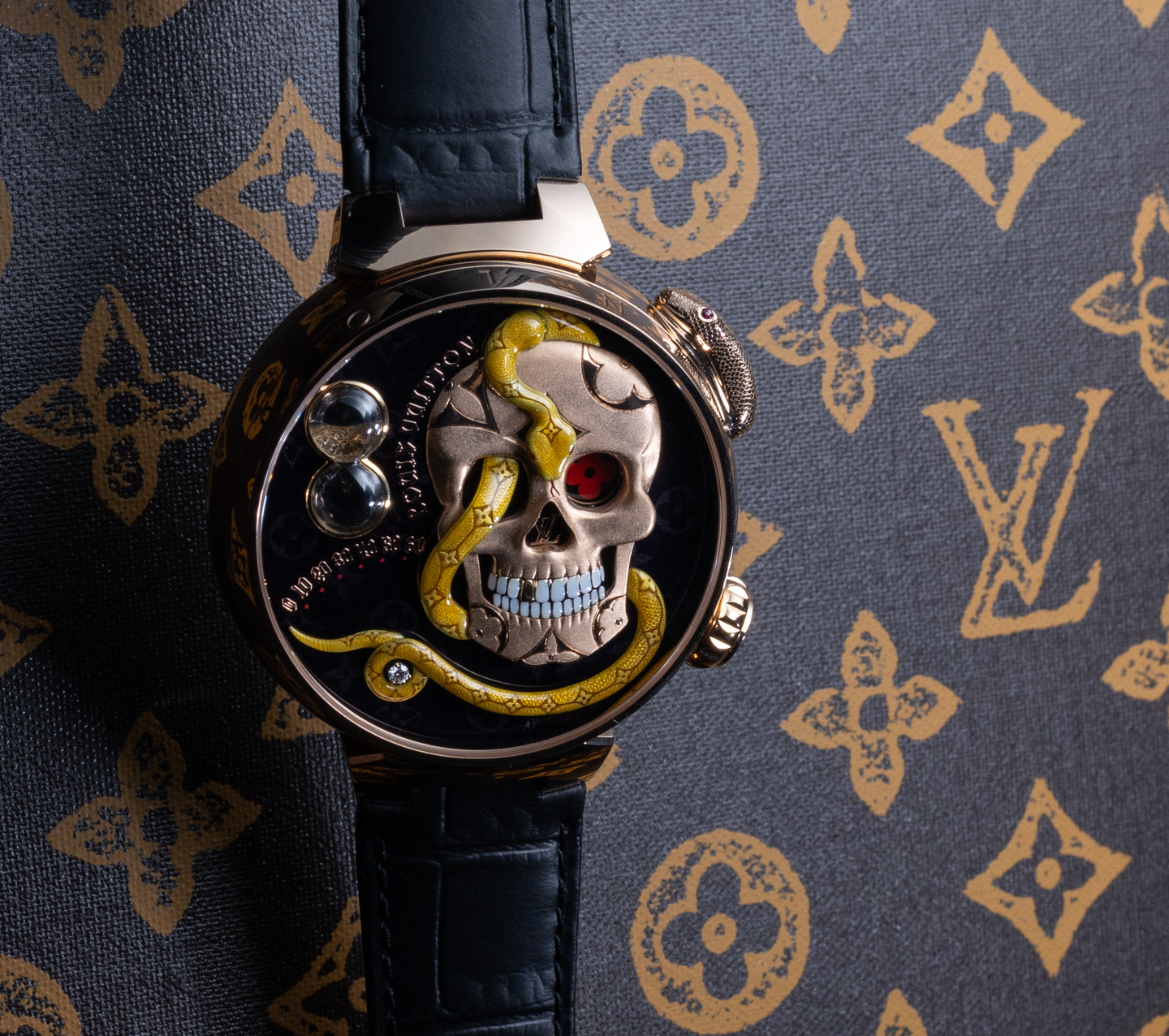 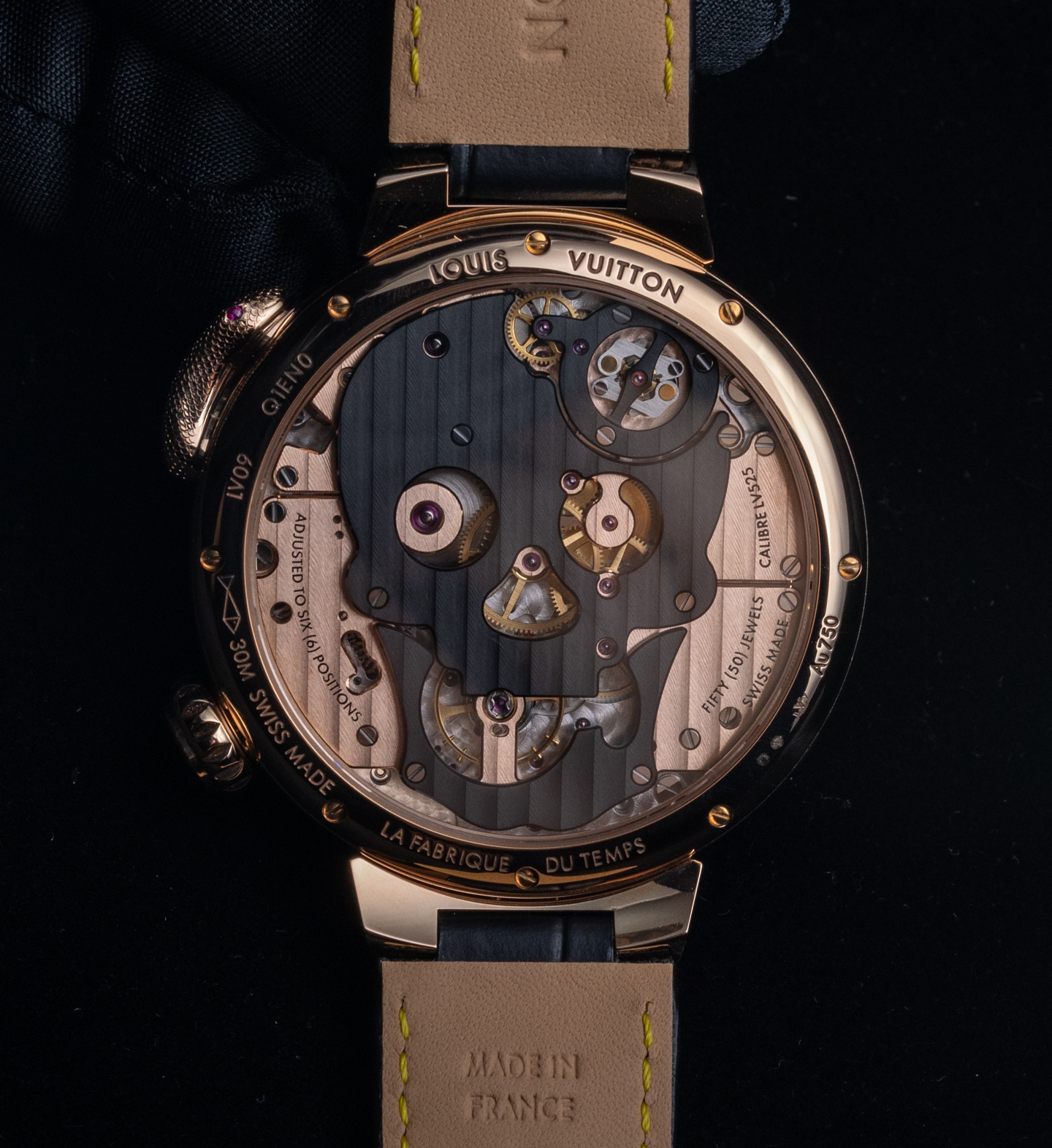 Louis Vuitton’s take on the memento mori concept combines the brand’s penchant for art and visual pizazz. The sheer level of detailing is impressive, along with the utter complexity of the animated mechanism. Louis Vuitton could have just stopped at making a brand watch with skulls on it. It decided to take it much, much further than that. In fact, the use of a skull on both the dial of the watch and as an integrated part of the movement’s structural bridge system (as seen through the rear of the watch) demonstrates a real marriage of the skull concept being represented both technically and artistically in this product.

From a brand perspective, Louis Vuitton was probably wise not to put the message “remember you will die” on one of its products. Accordingly, they use the famed Latin term “carpe diem” (seize the day) as the verbal message to communicate the memento mori theme. Now that we’ve talked a bit about the overall purpose of this watch and the context within which it was produced, let’s explain what it does. No discussion of the Louis Vuitton Tambour Carpe Diem would be complete without a video demonstration — even a lengthy verbal discussion will confuse anyone without some visual guidance. 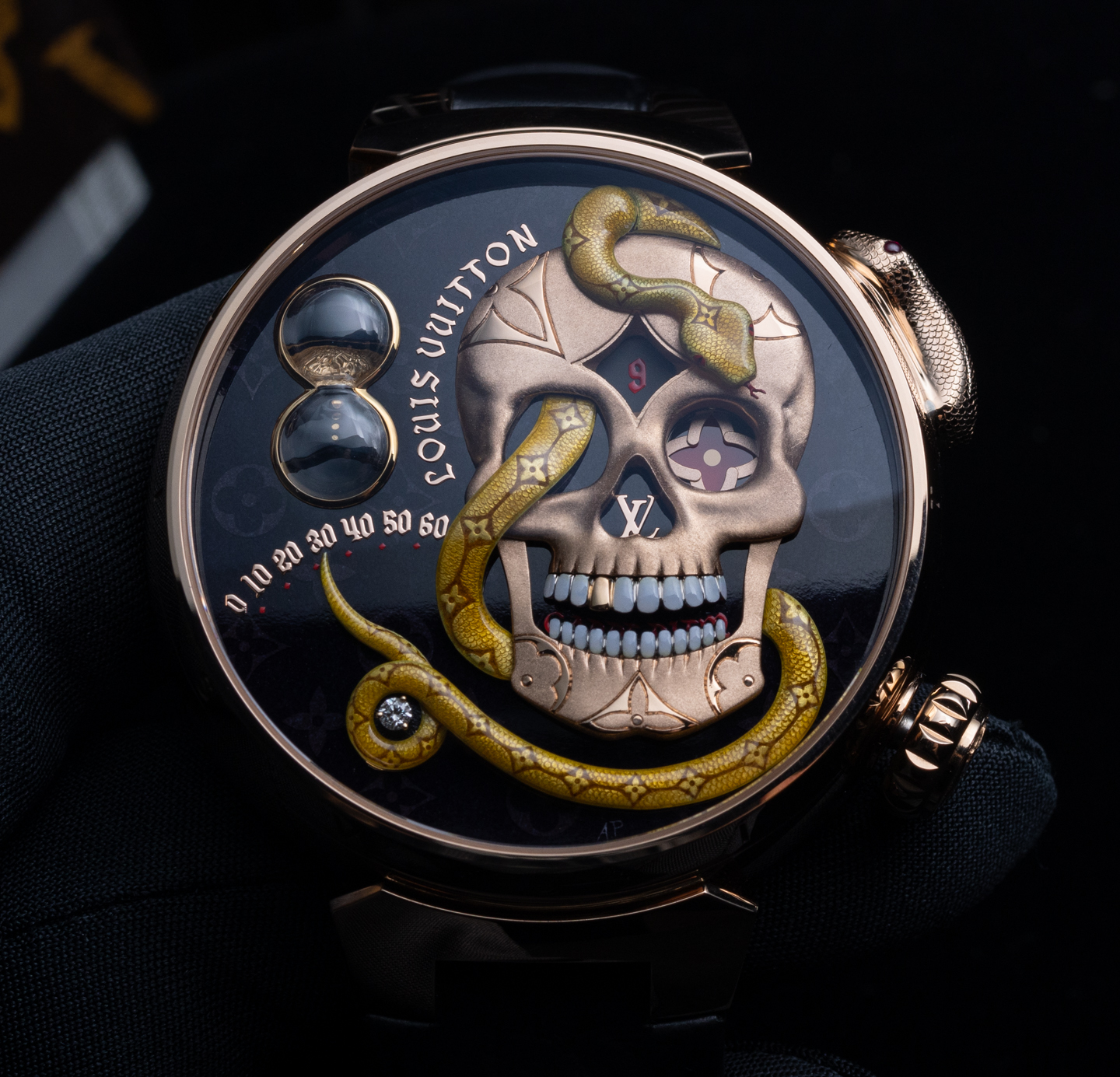 How do you tell the time? After activating the pusher on the side of the case, the in-house caliber LV 525 movement begins a special animation sequence that simultaneously displays the time and brings the skull and snake to life. Thus, the watch display combines automatons (often called jaquemarts but that is not technically correct since I believe jacquemarts are dial animations that are specifically linked to a minute repeater’s operation) and a time-telling feature. Automata sections include the mouth of the skull, which opens to display the “Carpe Diem” message written in red, as well as the left (from the skull’s perspective) eye that morphs from the rounded Louis Vuitton brand logo flower to the more pointed-style flower. This system is patent-protected because La Fabrique du Temps had to invent something new in order for it to operate correctly. 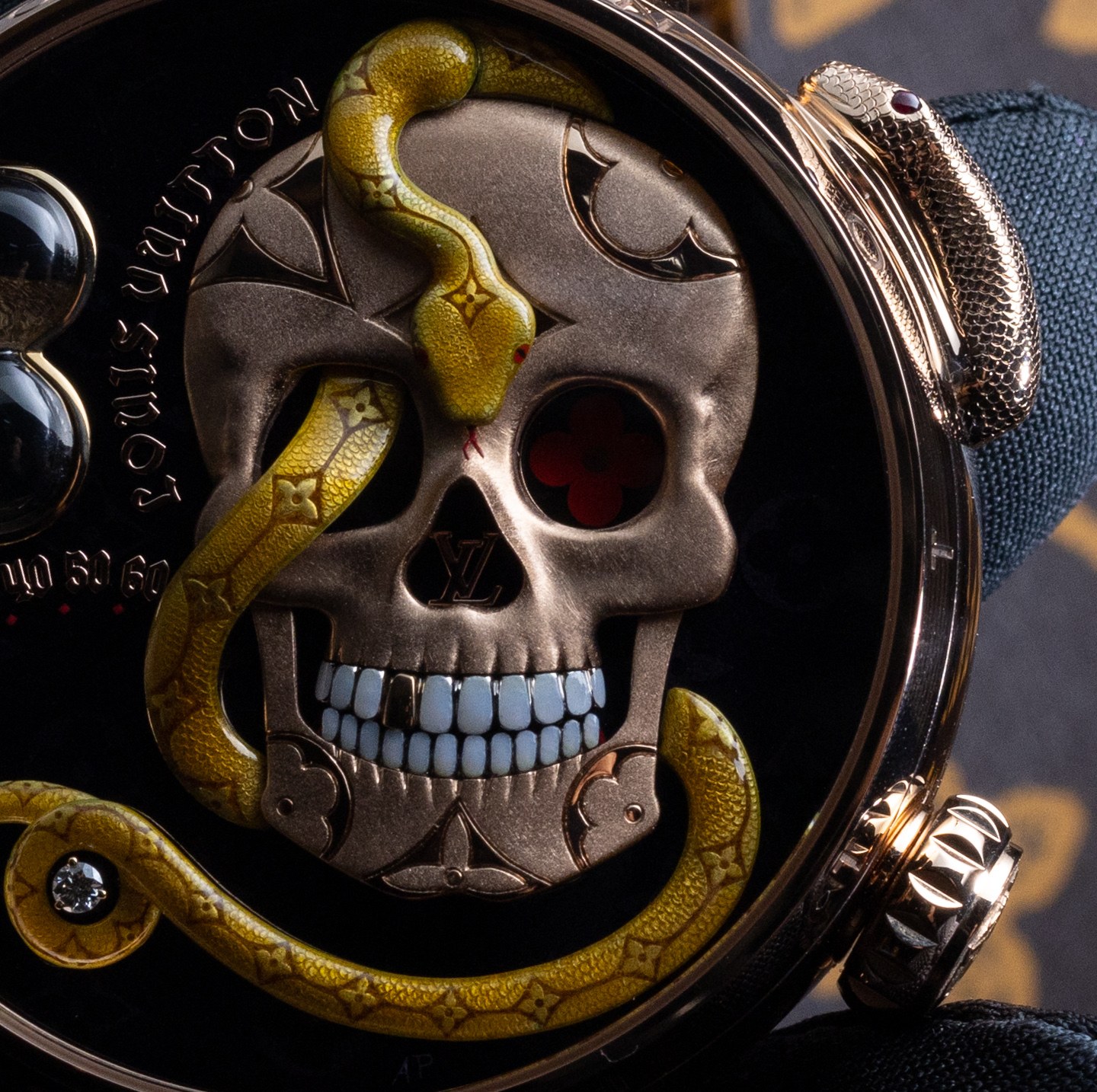 Most of the visual animation comes from the snake, which, for a period of about 16 seconds (the duration of the animated display) rattles its tail and sways its head. The snake body itself is designed with a skin that uses the Louis Vuitton logo as part of its pattern. Nods to the Louis Vuitton brand logo and name are common themes for the watches, and that is no different here, as the dial and case repeat various forms of Louis Vuitton branding again and again. While not every brand handles its logo in the same way, a core part of Louis Vuitton’s personality is a sort of self-obsession with its own name and symbols. This tendency certainly does result in plenty of creative ways of displaying such icons in this and most other Louis Vuitton products.

Finally, we get to the time. As I mentioned above, the watch movement has a power reserve of 100 hours, and the movement also operates at 3Hz. I already mentioned the hourglass power reserve indicator, and now I’ll discuss how to read the time. Hours are displayed in a jumping hours format through a window that is revealed on the skull’s forehead. This window is hidden by the snake’s head until you activate the time-indicating animation system. The snake’s tail (which is also “wrapped” around a set diamond) becomes a retrograde-style minute indicator hand. It moves along a 0-60 scale painted on the dial. 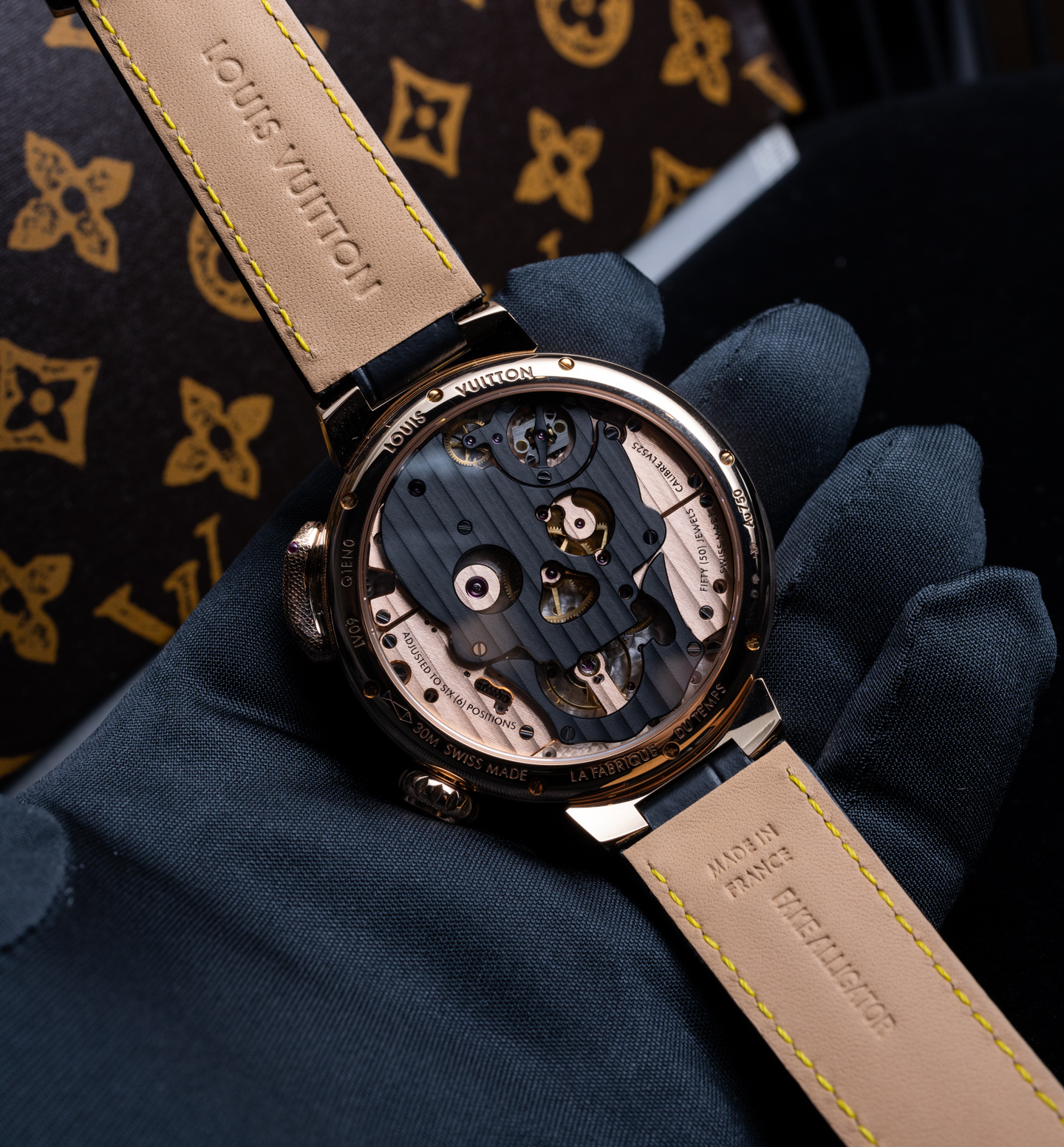 Louis Vuitton even had to invent a way to set the time for the novel display in the LV 525 movement. To adjust the watch, you need to first activate the animation system and pull out the crown. Louis Vuitton doesn’t even publish complete instructions for how to use the watch. Rather, anyone who purchases a Tambour Carpe Diem (and pieces like it) gets a personalized product presentation that explains how to use and adjust the delicate mechanical creation. Such services are hardly uncommon with products like this because mistakes can lead to costly repairs — and no one wants unnecessarily angry VIP customers who inadvertently remind their memento mori objects about timepiece mortality.

At nearly 47mm-wide and 14.2mm-thick, the Tambour Carpe Diem isn’t the smallest Lous Vuitton watch out there. But the large size is important to both house the mechanism and to showcase the intense level of detailing on the dial. Louis Vuitton is pretty modern in the sense that it is happy to name the two artisans who are responsible for hand-making each of the Carpe Diem dials. The work starts with engraved gold, which is produced by the master engraver Dick Steenman. He is responsible for engraving the snake and skull’s shape and details. Once Mr. Steenman is done crafting the dial elements, they must then be carefully hand-enamel-painted. This is another rare and celebrated craft that is performed for Louis Vuitton by the popular and very busy Ms. Anita Porchet. Painted under magnification, this particular dial is extra-complicated because of all the three-dimensional and curved surfaces. (Don’t forget that most hand-painted watch dials tend to be flat.) Louis Vuitton claims that the enamel painting work on the dial requires around 50 hours of time alone by Ms. Porchet, a master of her craft. 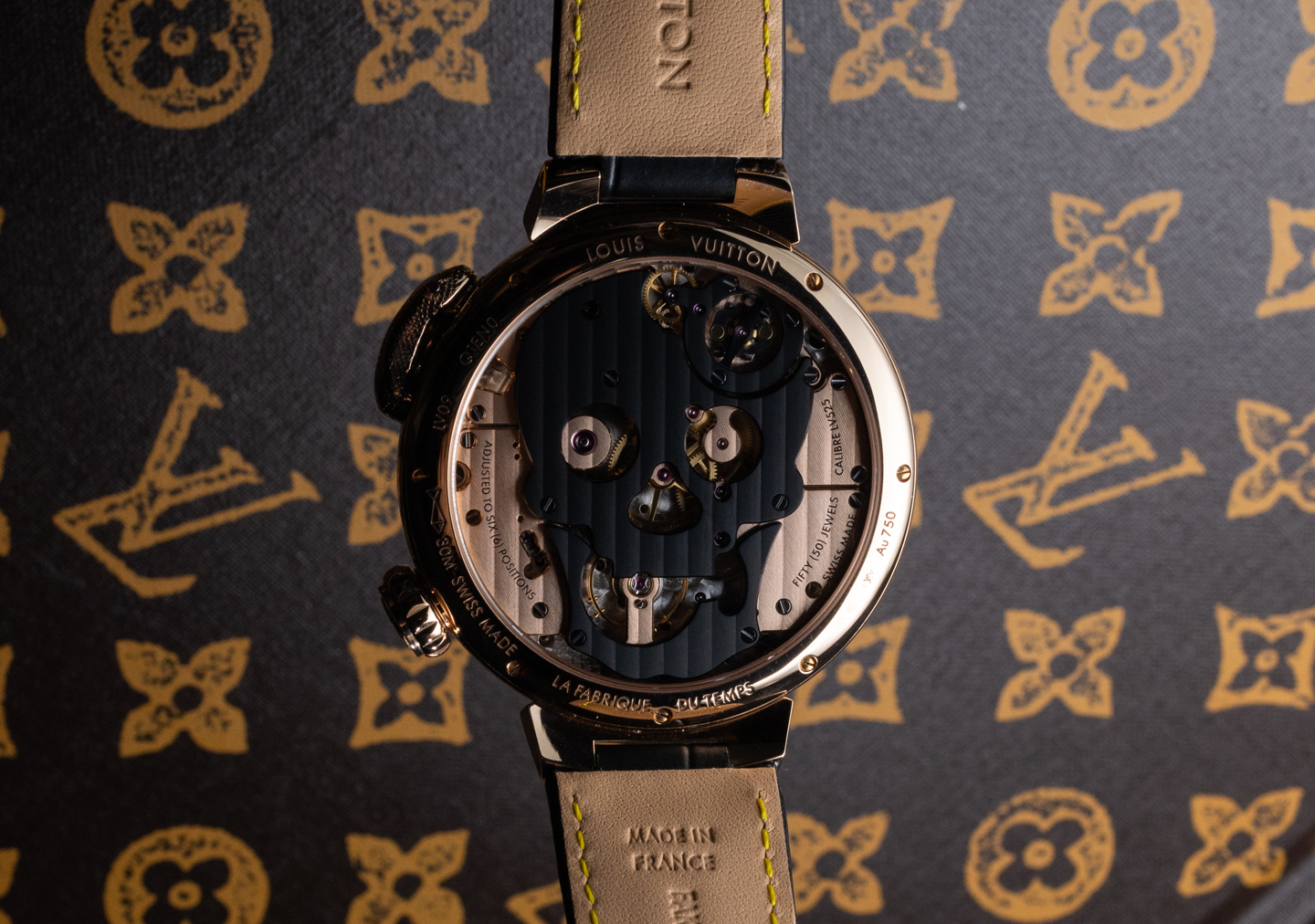 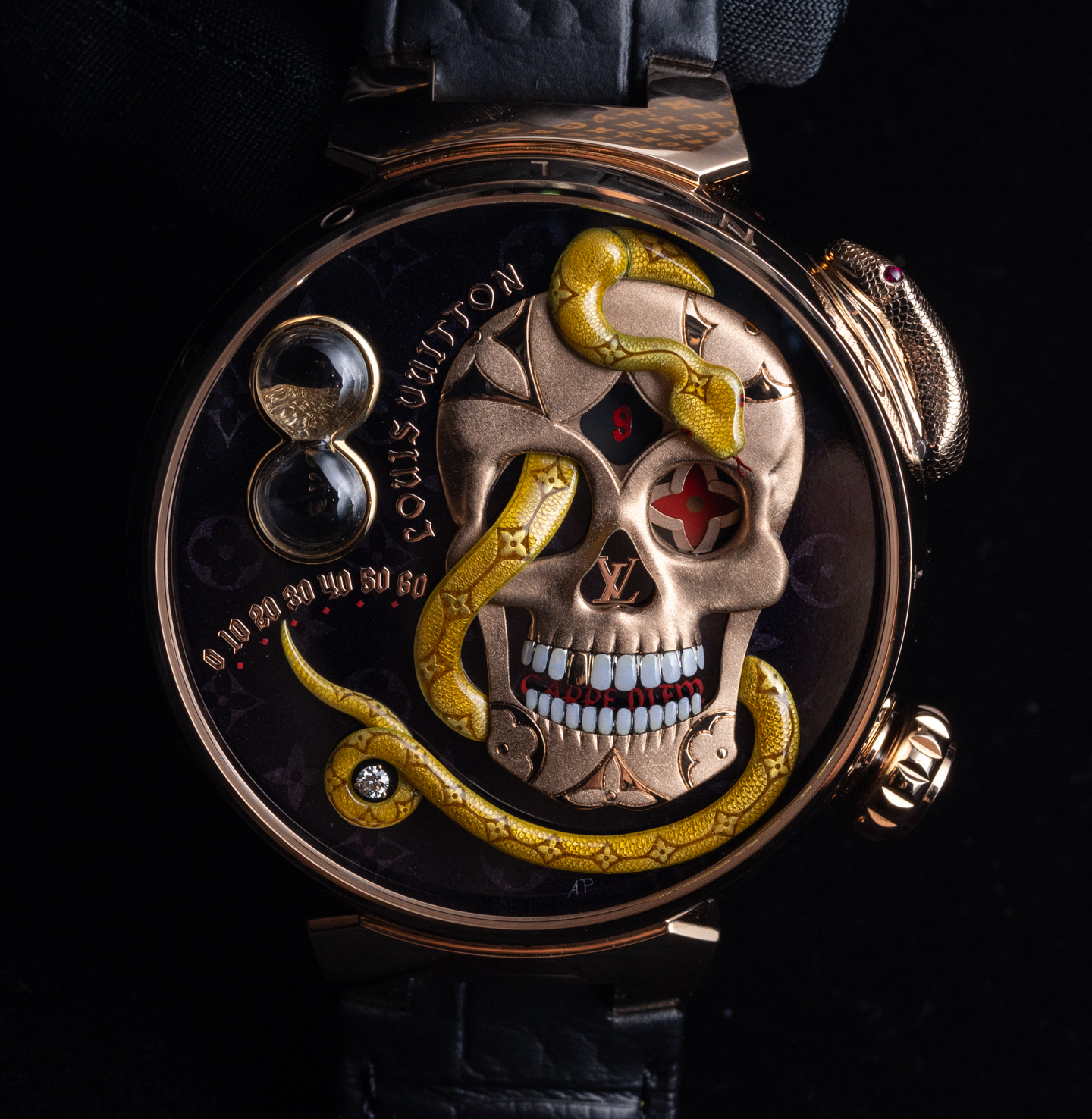