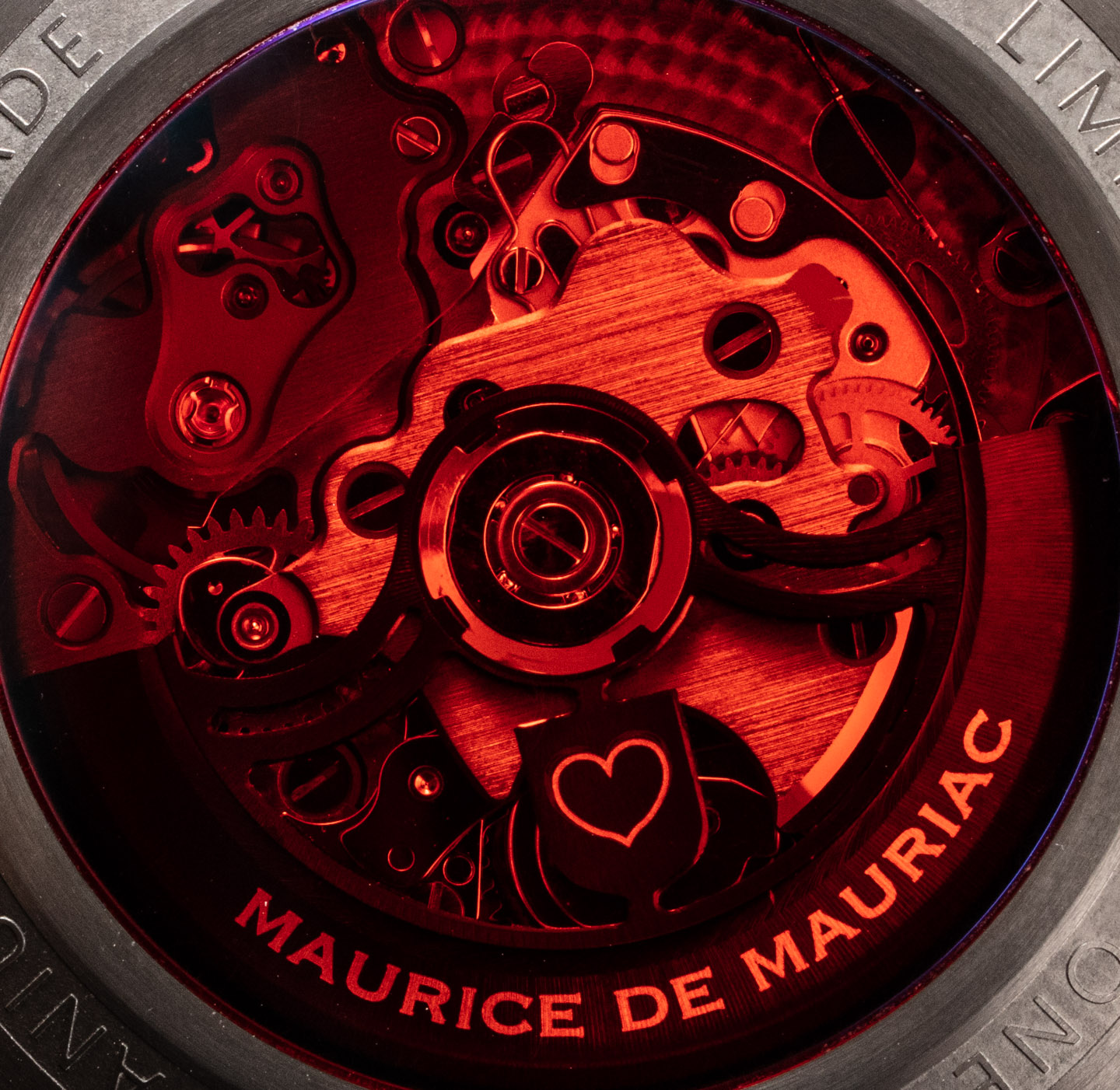 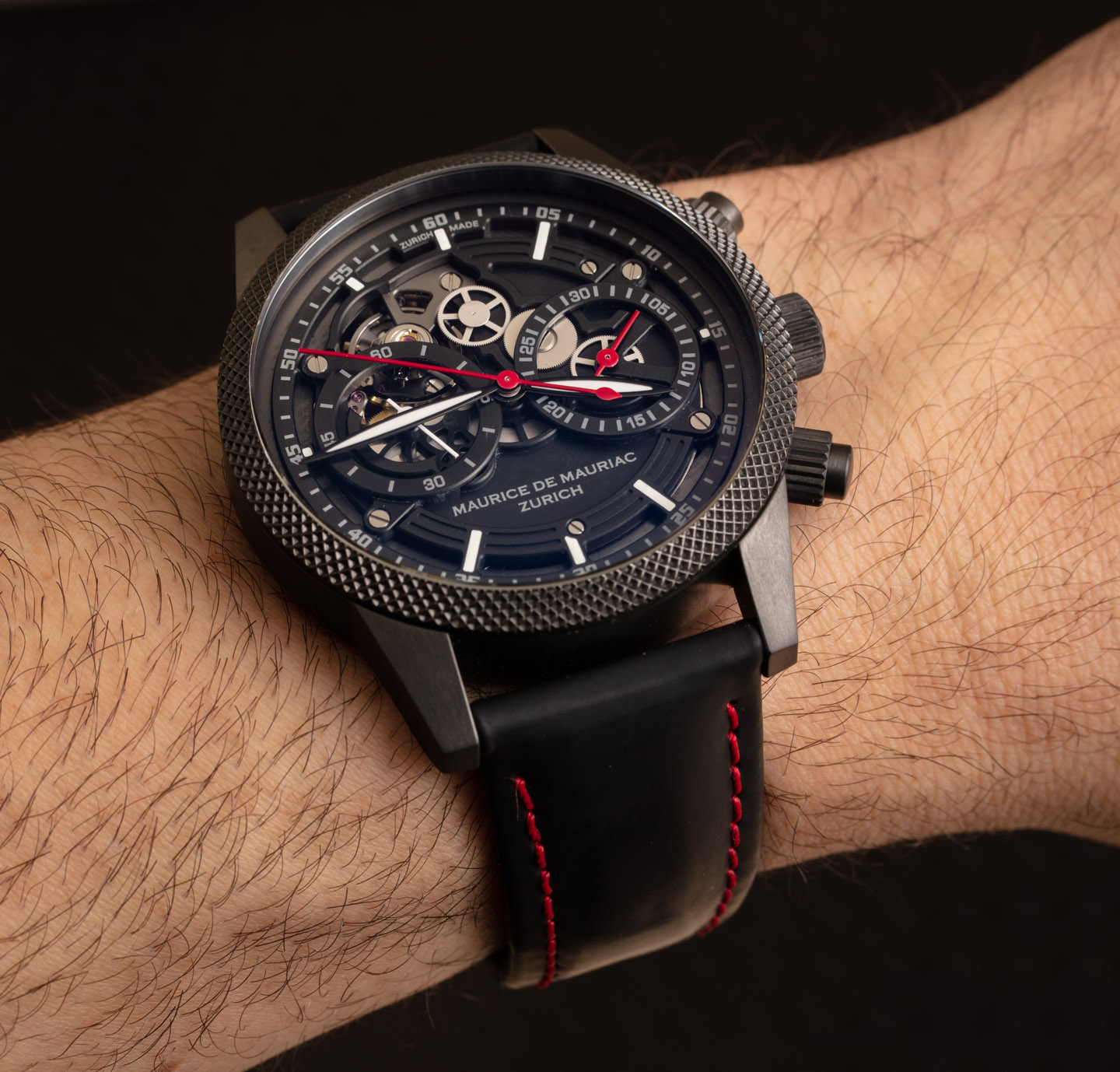 The latest new wristwatch creation from Zurich-based Maurice de Mauriac is the Chrono Modern Skeleton “Grand Coeur” (big heart). The Grand Coeur is among the most expensive watches ever produced by the boutique watchmaker — and that reflects the uncommon style of the chronograph movement used in the watch. It also represents the first watch released by Maurice de Mauriac after the brand’s founder (the affable and warm Daniel Dreifuss) steps aside after assigning leadership responsibilities to his two sons (perhaps the daughter will have a role in the future).

Massimo and Leo Dreifuss grew up around watches and now face the stark reality of having to run a company that doesn’t match the industry that existed when their father started the first. The luxury Swiss watch industry today presents smaller, independent brands with novel marketing challenges and competition from fresh arenas. What hasn’t changed about vending luxury timepieces for Maurice de Mauriac is that its bread and butter is selling watches one at a time directly to enthusiasts. 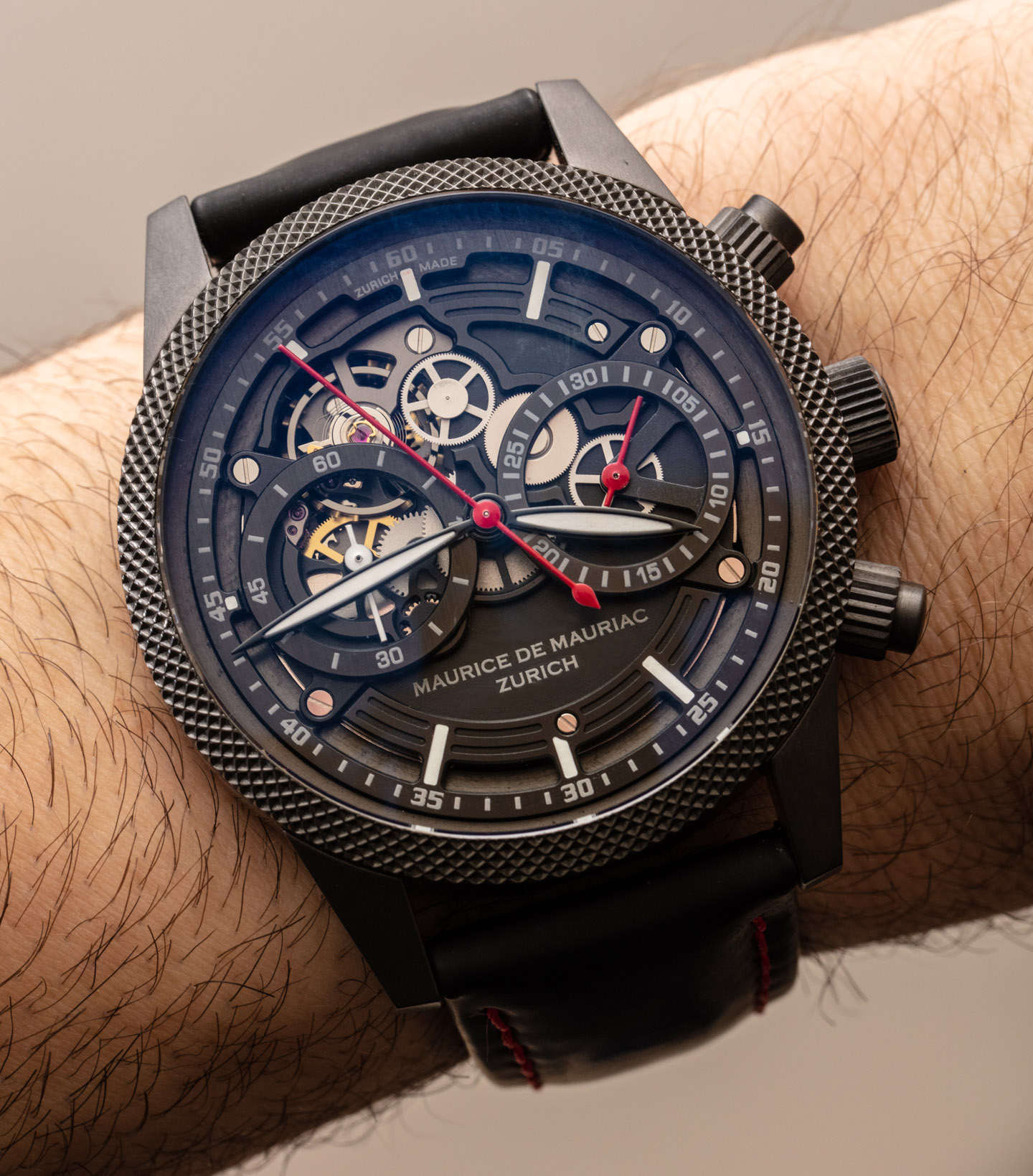 Daniel Dreifuss himself never seemed to want to stare into the guts of a watch movement, preferring to celebrate his own fashionable sense of Euro-style sportiness in wristwatch form no matter where he traveled to in the world. The fun, hip spirit of the European design that birthed everything from sporting goods to automobiles and other vehicles is what inspired Dreifuss. His children, on the other hand, begin with a defense of their core values. The Chrono Modern Skeleton Grand Coeur is a thinly-veiled allegory reflecting the values of the Swiss watch industry itself.

The optics of the Grand Ceour watches are simple. Create an open-heart dial with an attractive chronograph movement and emphasize the mechanical nature of the watch in the process. Maurice de Maurice uses a red-tinted sapphire crystal over the rear of the case to create a “blood red” effect when viewing the oscillating balance wheel through the front of the watch. Maurice de Mauriac wanted the user to view the oscillator like a “pumping heart” with the watch help up to the light, as the rear of the oscillator would “glow” red due to the color of the rear sapphire crystal. This is set against the backdrop of a chronograph movement’s assembly selectively showing on the dial, which artistically blends with the aesthetic of the movement. This display design is entirely for aesthetics, a rare move for the brand that so often has prided itself on highly utility-focused wristwatch designs (with fashionable colors). 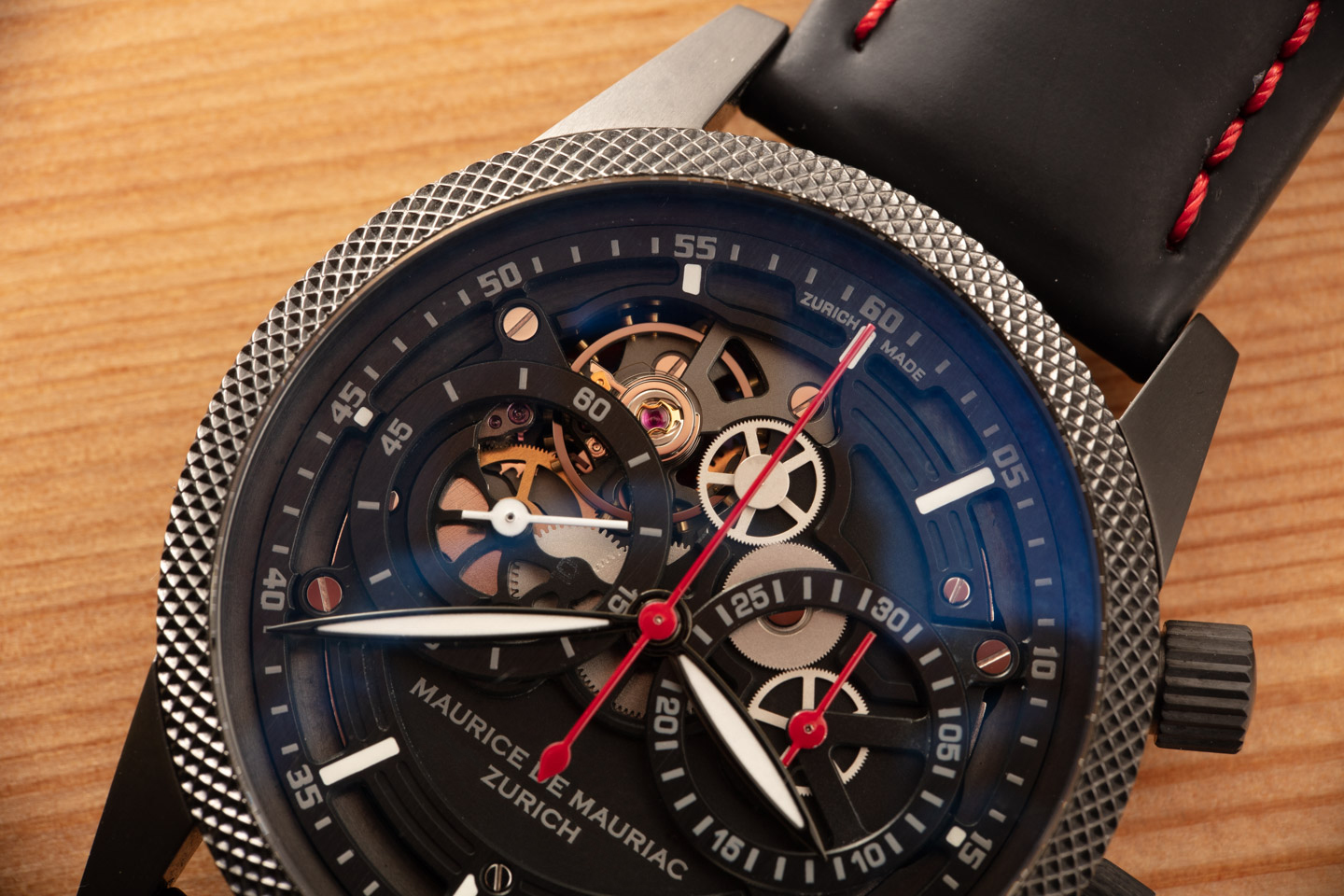 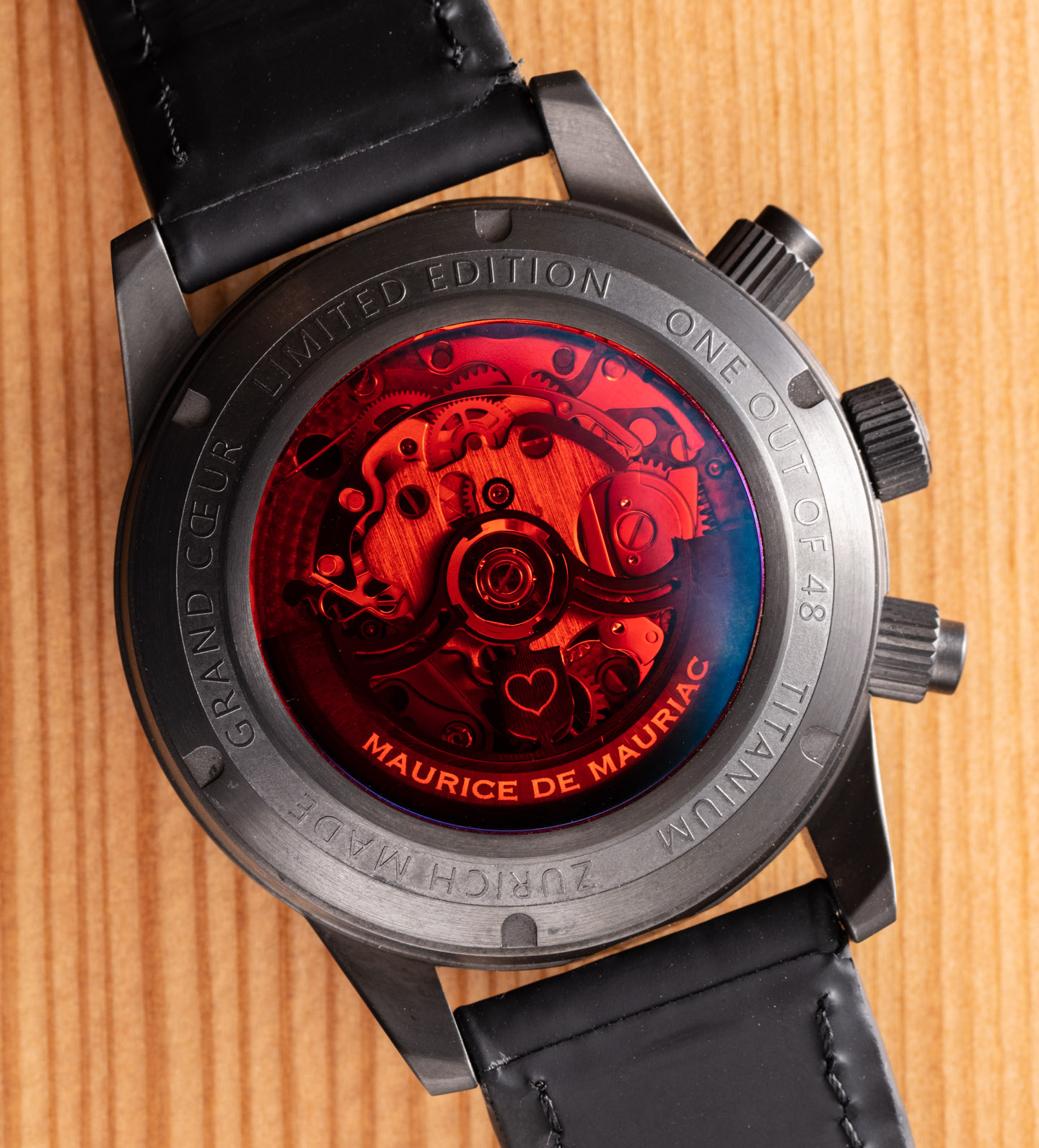 The Grand Coeur comes in a 45mm-wide titanium case that has been DLC-coated in a dark gunmetal color. The bezel is a knurled pattern, which, as a texture, actually helps to reduce visual mass a bit. The cases use a screw-down crown as well as screw-down chronograph pushers. Neither the watch case nor the website mentions the watch’s water resistance rating. That seems like an odd omission. I’m guessing 50 or 100 meters? Maybe it is best to not take it swimming.

Complementing the rear crystal’s red color, the front crystal is traditionally clear, AR-coated, and also domed. Inside the watch is a movement Maurice de Mauriac calls the caliber Grand Coeur 3038. What makes this Concepto-made movement interesting is how the movement and dial are interwoven together as one unit. I like the new Maurice de Mauriac custom automatic rotor design with the heart motif in the center of the cut-out design. The movement operates at 4Hz with about two days of power reserve. 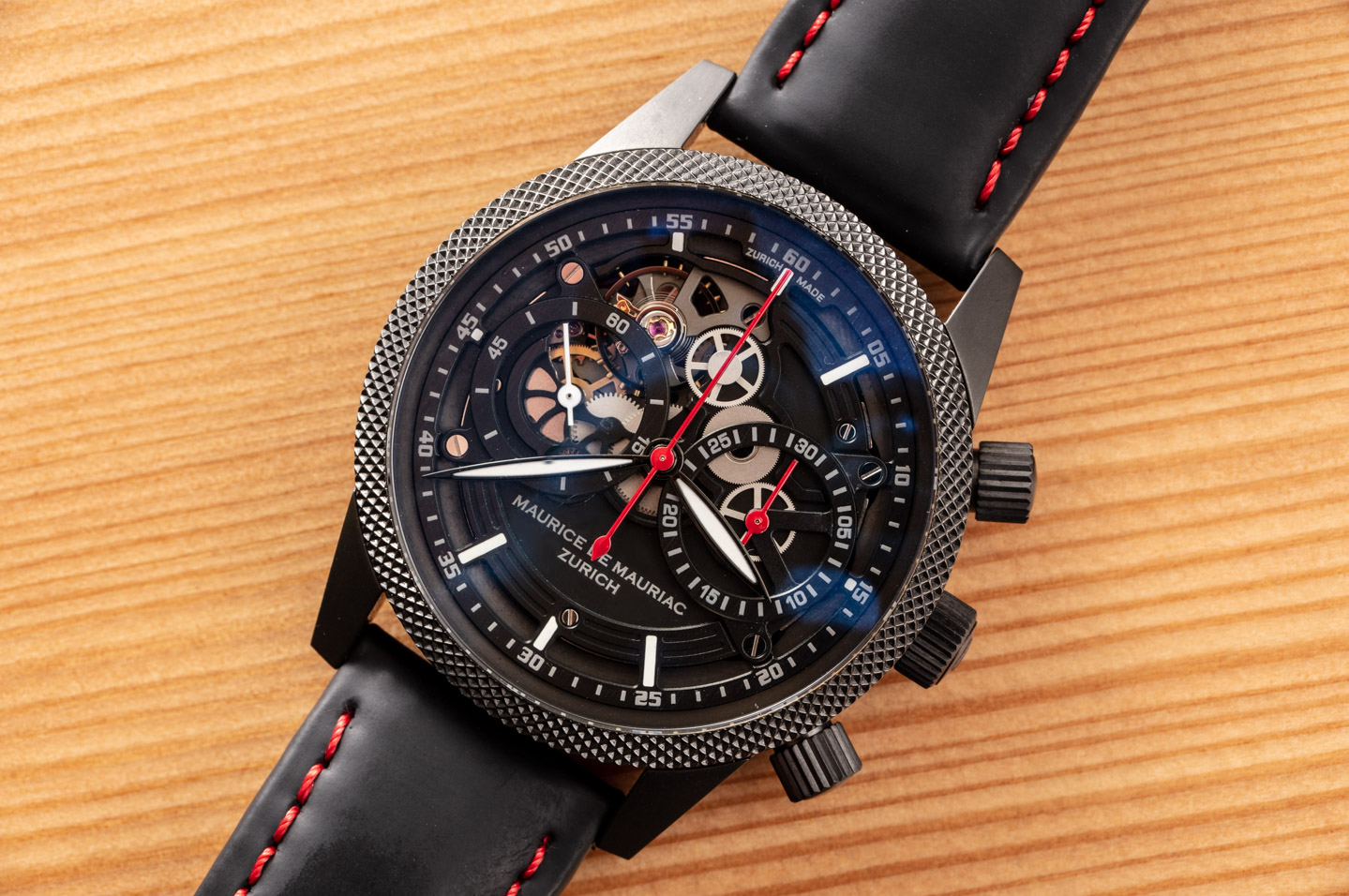 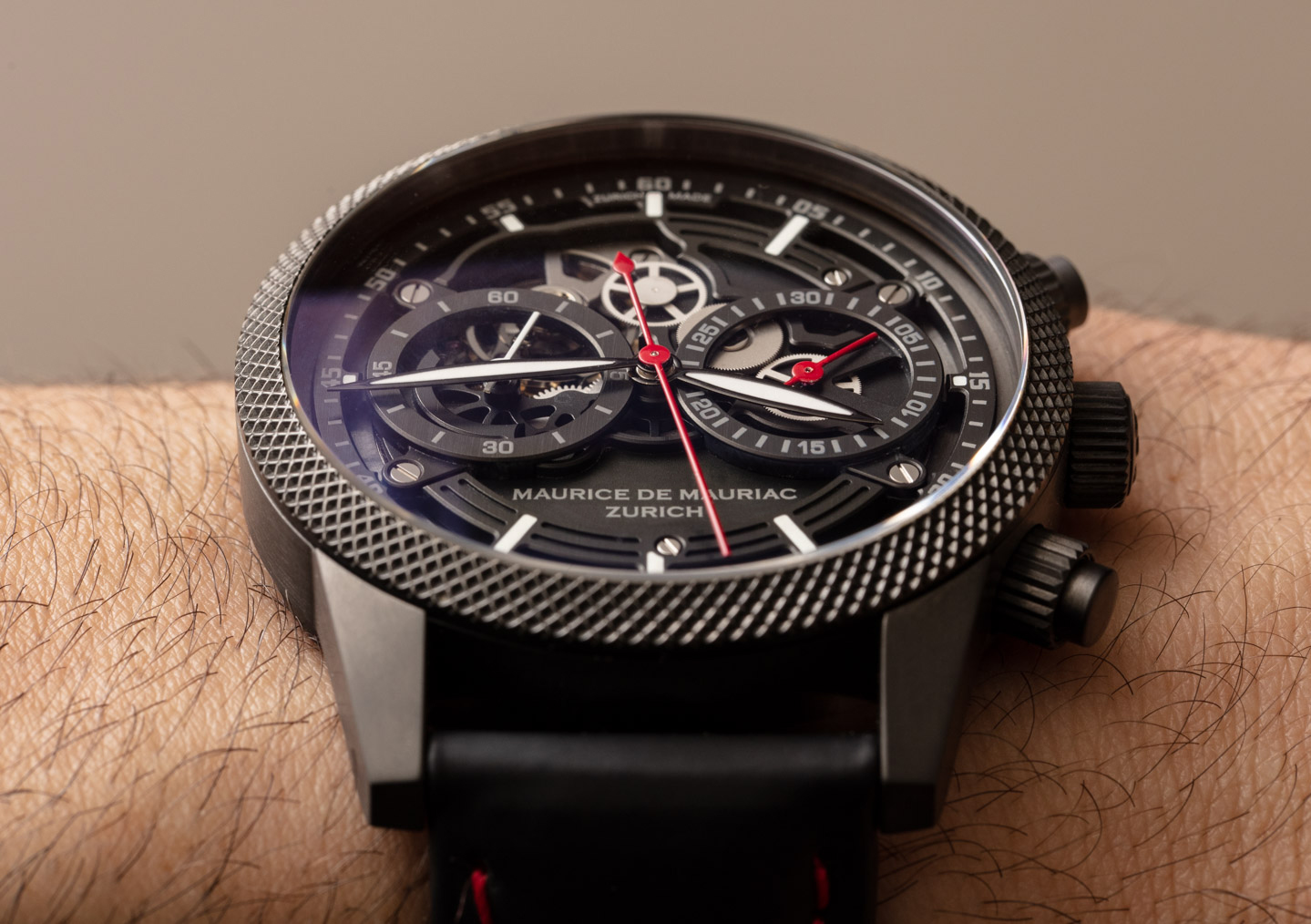 Attached to the watch is a rather nice strap, which is to be expected from the brand, though I would have liked for them to provide a traditional ardillon buckle along with the (admittedly compact) deployant buckle). The strap feels like a rubber-coated leather or other material and is nicely stitched with red to match the base black. The overall red and black theme of the Grand Coeur is handsome.

“Break-away” watch dial faces like the Chrono Modern Skeleton Grand Coeur reference MDM.330.GRC.45 are typically more macho and modern than they are timeless or beautiful. The Grand Coeur is a poetic look into the central values of an entire watch industry culture in Switzerland, but it isn’t going to win top scores at a beauty contest. It does, however, remain a legible tool watch, and it has an understated conservatism that can appeal to those people who might be turned off by a Hublot. While as boutique as the brand, there is a market for these types of independent watch products. Price for the limited edition of 48 pieces Maurice de Mauriac Chrono Modern Skeleton Grand Coeur reference MDM.330.GRC.45 is 13,500 Swiss Francs. Learn more at the Maurice de Mauriac website here.