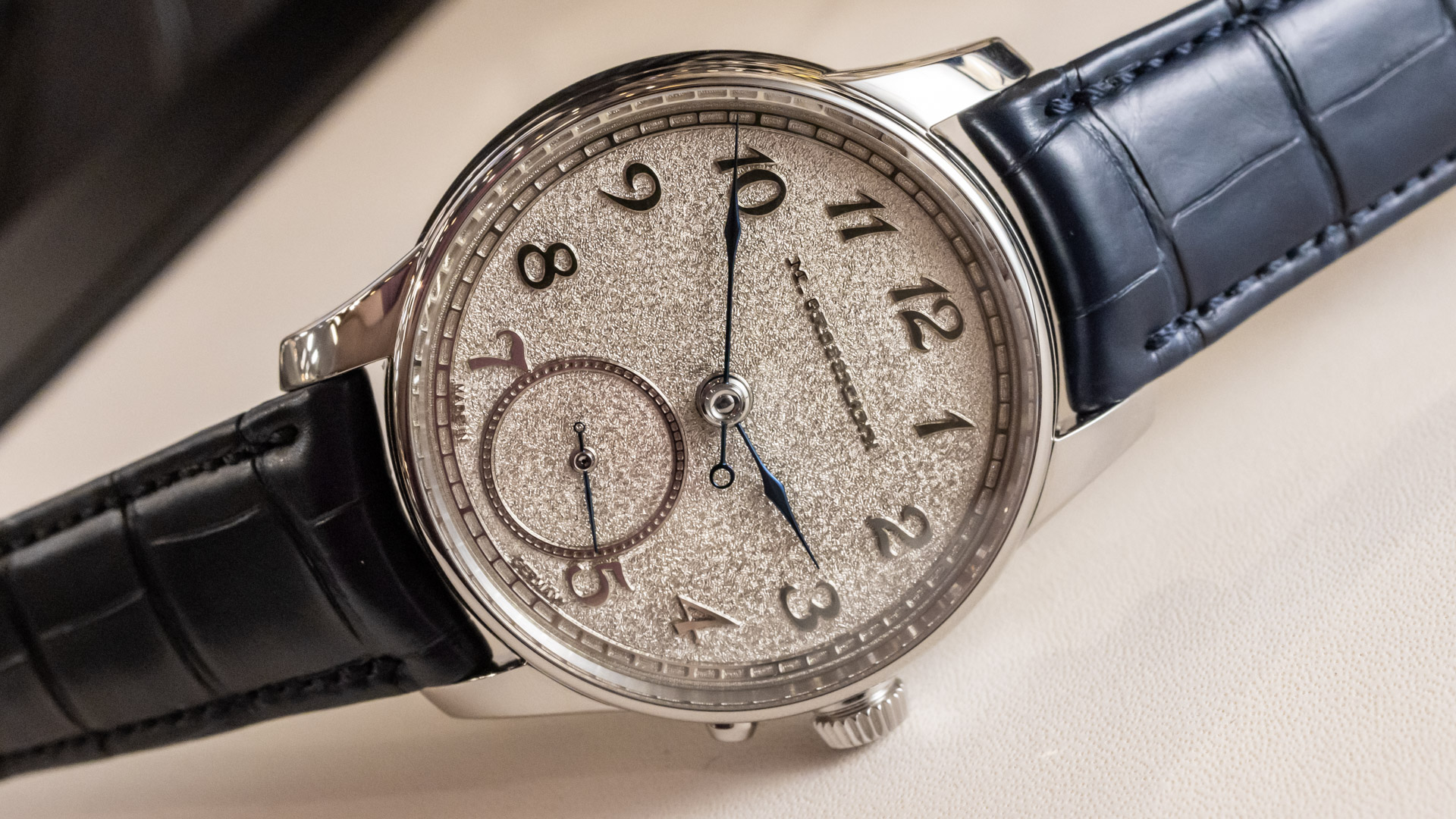 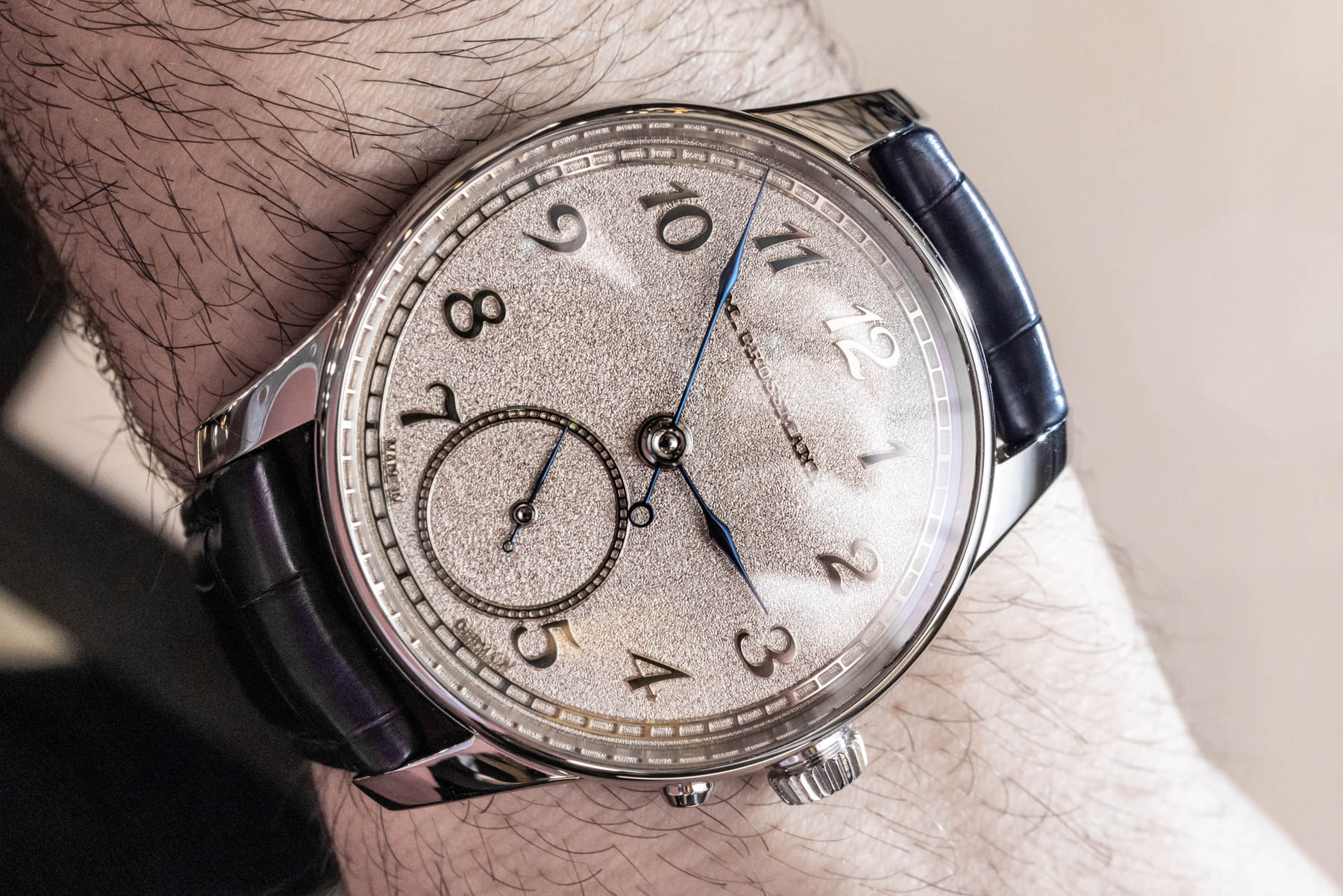 Glashütte-based Moritz Grossmann was revived back in 2008 and has been creating some truly impressive and meticulously crafted watches ever since. With an annual output somewhere between 200-300 pieces, it’s not likely you’ll spot one in the wild, but that’s all just part of the appeal. Inevitably drawing comparisons to some of neighboring A. Lange & Söhne’s handwerkskunst pieces, Moritz Grossmann released the Tremblage watch late last year to celebrate the brand’s 13th birthday. 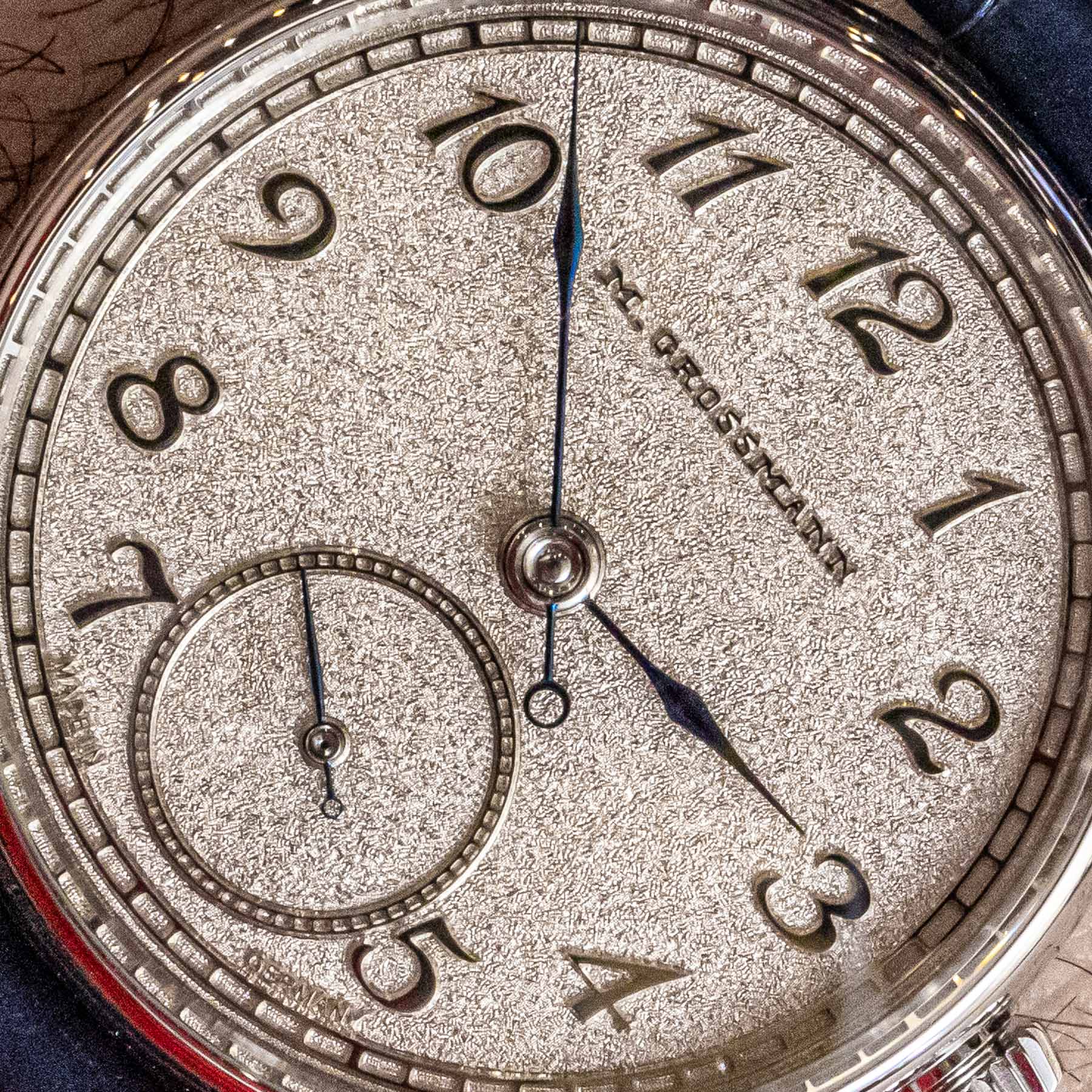 For those not familiar, tremblage is an incredibly difficult and intricate method of engraving in which the crafter uses a very fine-tipped chisel known as a burin to create a granulated texture. To keep the consistency and uniformity across such a small piece of metal (German silver here) takes years and years of training and practice. 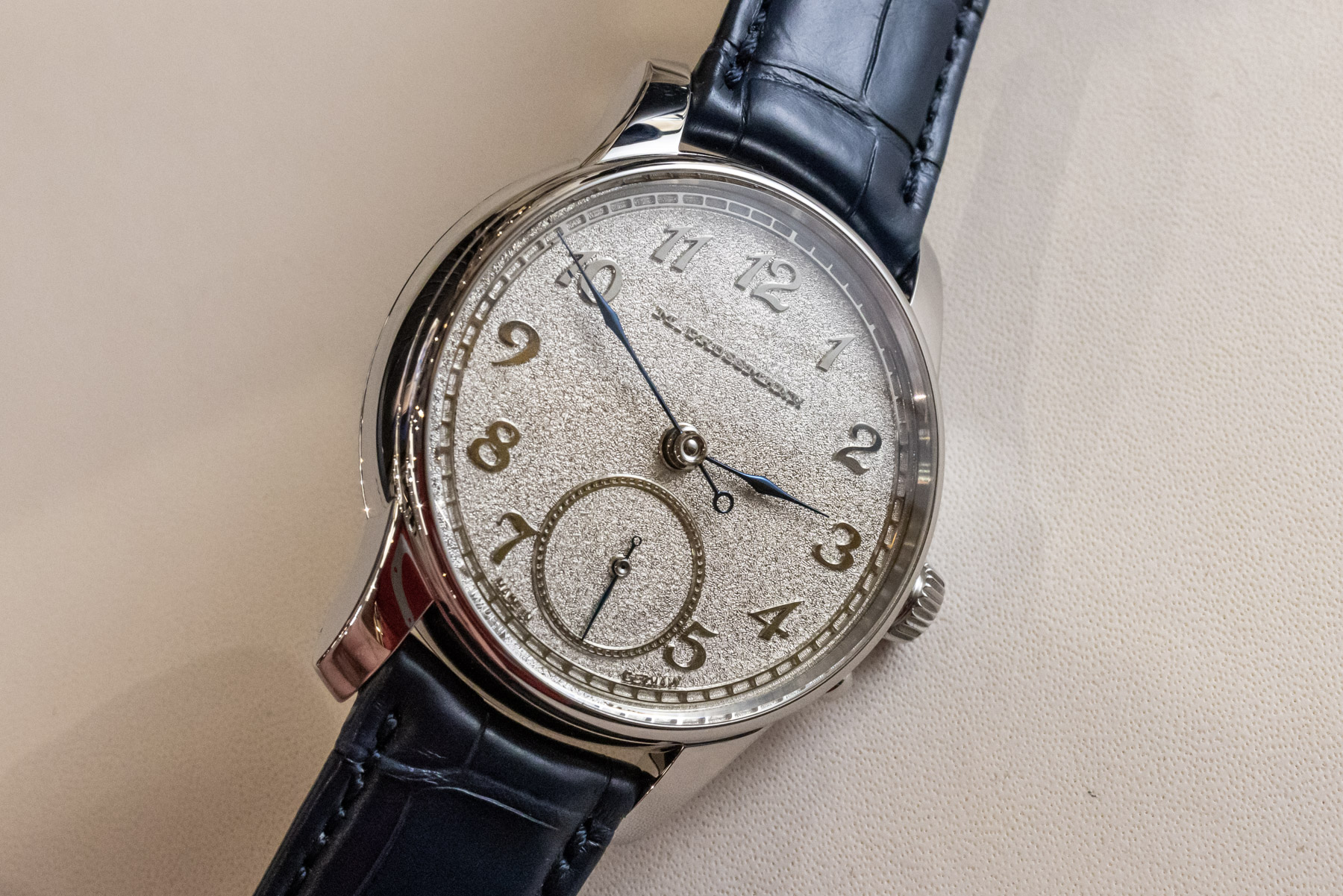 With the exception of some pieces in Lange’s catalog, I really don’t see much tremblage out there because it’s incredibly difficult to achieve, and the talent pool of engravers who have mastered the technique is very small. Done in German silver (which has a distinct warmth to it), the dial is glimmeringly frosty and remarkably uniform, considering it’s all done by hand.  Equally impressive are the numerals, brand insignia, and minutes track, which are actually raised elements of the same piece of German silver where the tremblage is done on the base (as opposed to being applied). These raised elements are then done with a flat-polish finish. That’s a commitment to the craft and technique of engraving that is rarely seen. 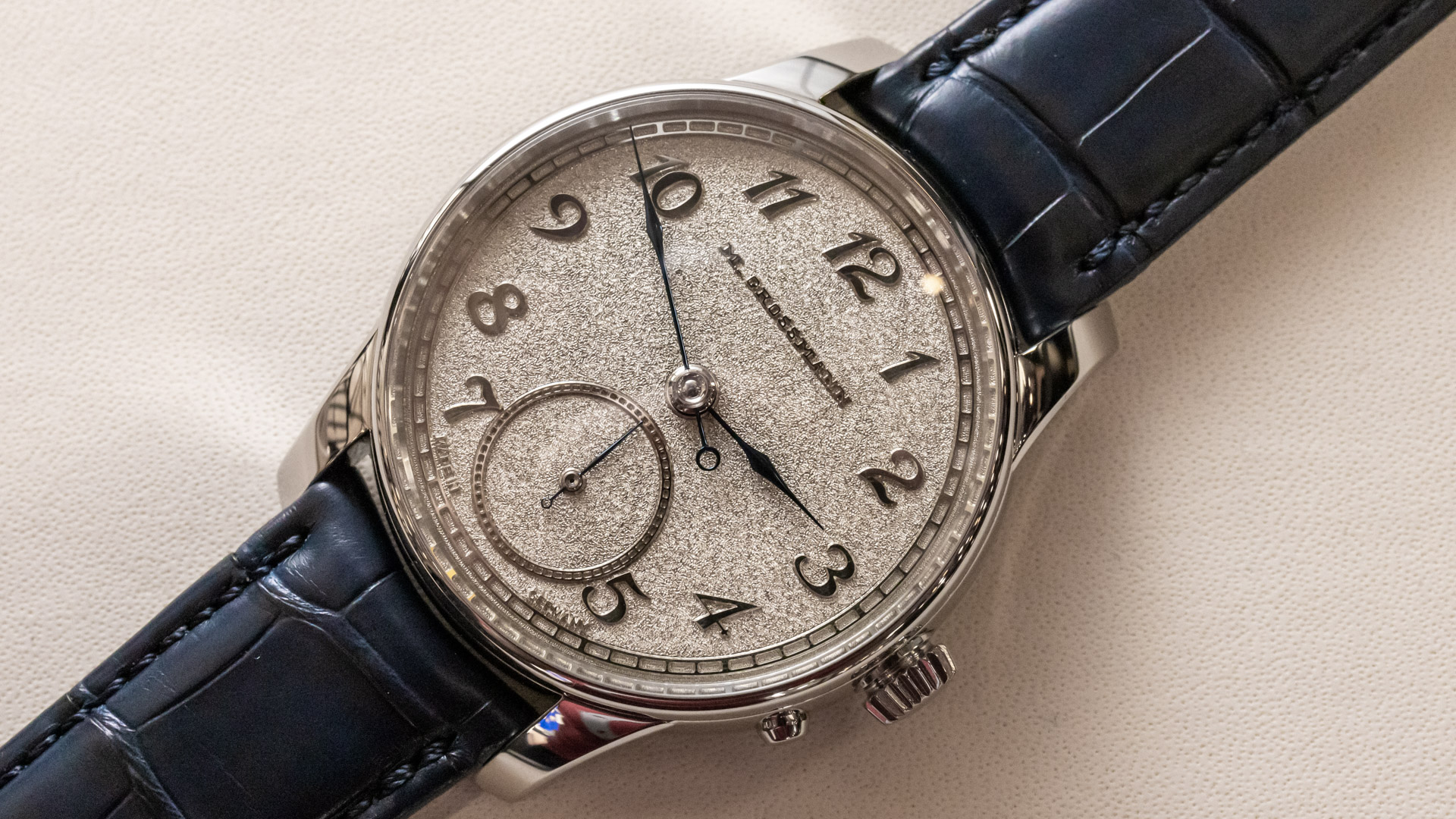 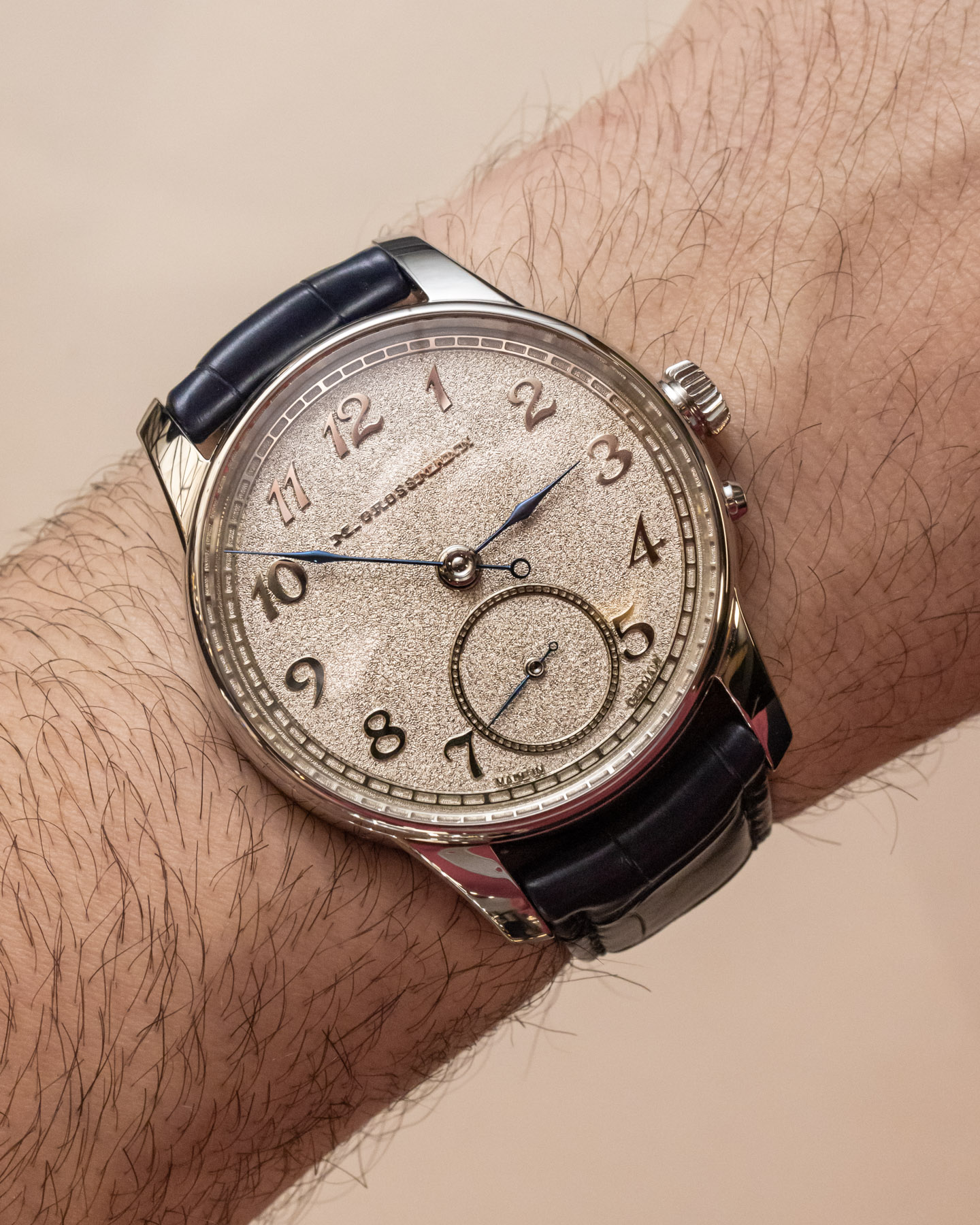 Seen here is the stainless steel model, which has blued steel hands, while the rose-gold variant has the strikingly beautiful dark violet hands that Moritz Grossmann has often used. Slender and precise, the lance-shaped hands help give that old-world pocket watch feel. Beyond that, they are absolutely the perfect length, with the minutes hand properly extending to the minutes track. 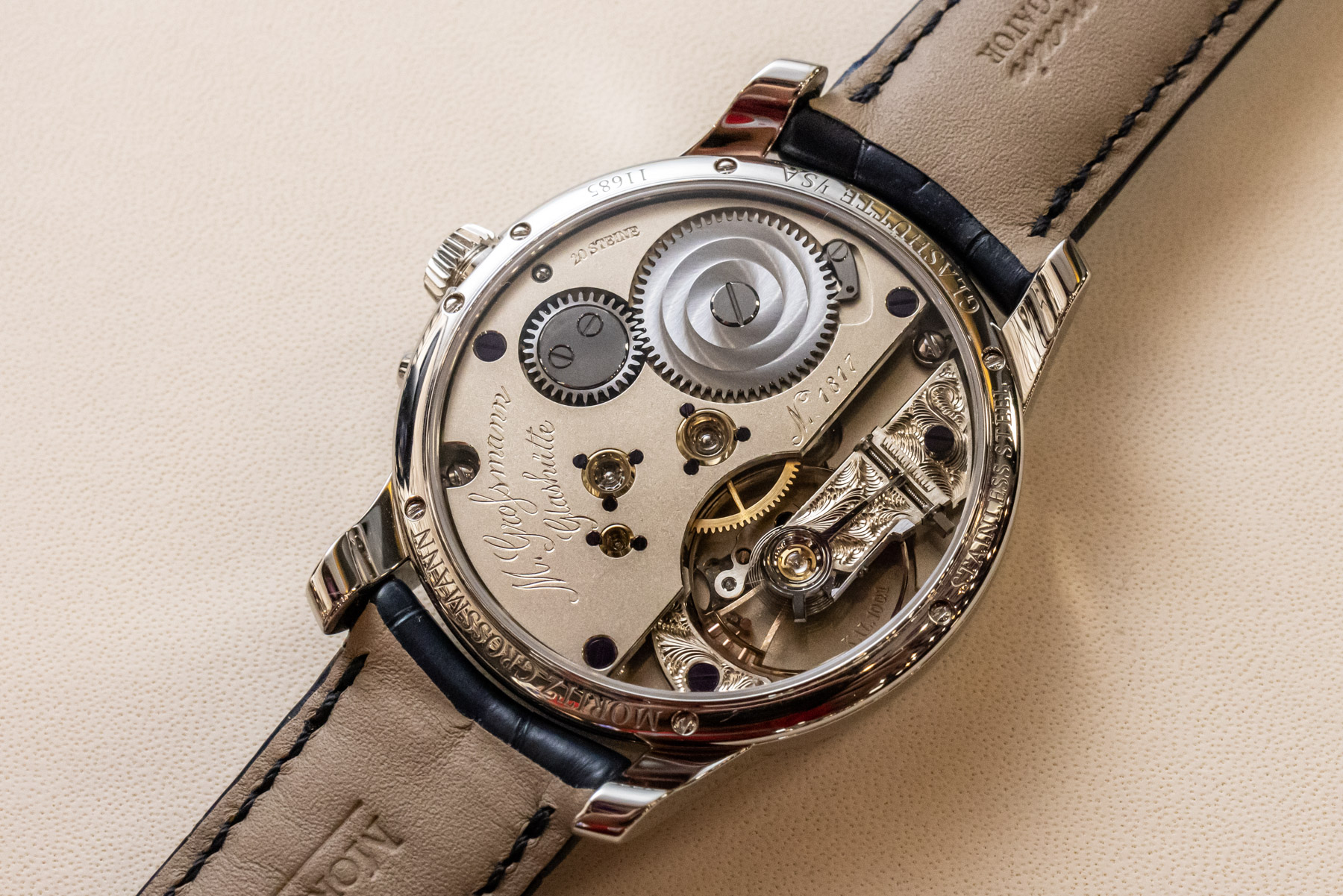 Turning the 41mm-wide and 11.35mm-thick case over reveals the impressively finished pocket watch-inspired calibre 100.1 manual-wind movement. Before that, take note of the small pusher on the side of the case by 4 o’clock. Developed by Moritz Grossmann, this pusher solves an issue we’ve all experienced at some point. After pulling the crown and setting the time, engaging the pusher reactivates the movement rather than the crown being pushed back in. This prevents any movement from the hands that often happens when the crown is pushed back in. When the pusher is engaged, the crown reverts to winding rather than setting time. A crafty and intelligent solution to a common problem.

The Calibre 100.1 operates at 18,000 vph and has a 42-hour power reserve. It’s classically designed with its two-third bridge done in German silver with a fine granular finish. I love the gold chatons with uncommon white sapphire, the hand-engraved M. Grossmann Glashütte text, and dark violet screws. The snailing on the ratchet wheel is also immaculate, as is the hand-engraving on the balance and escape wheel cocks. It’s a meticulously finished movement that more than holds its own against Grossmann’s better-known Saxon neighbor. 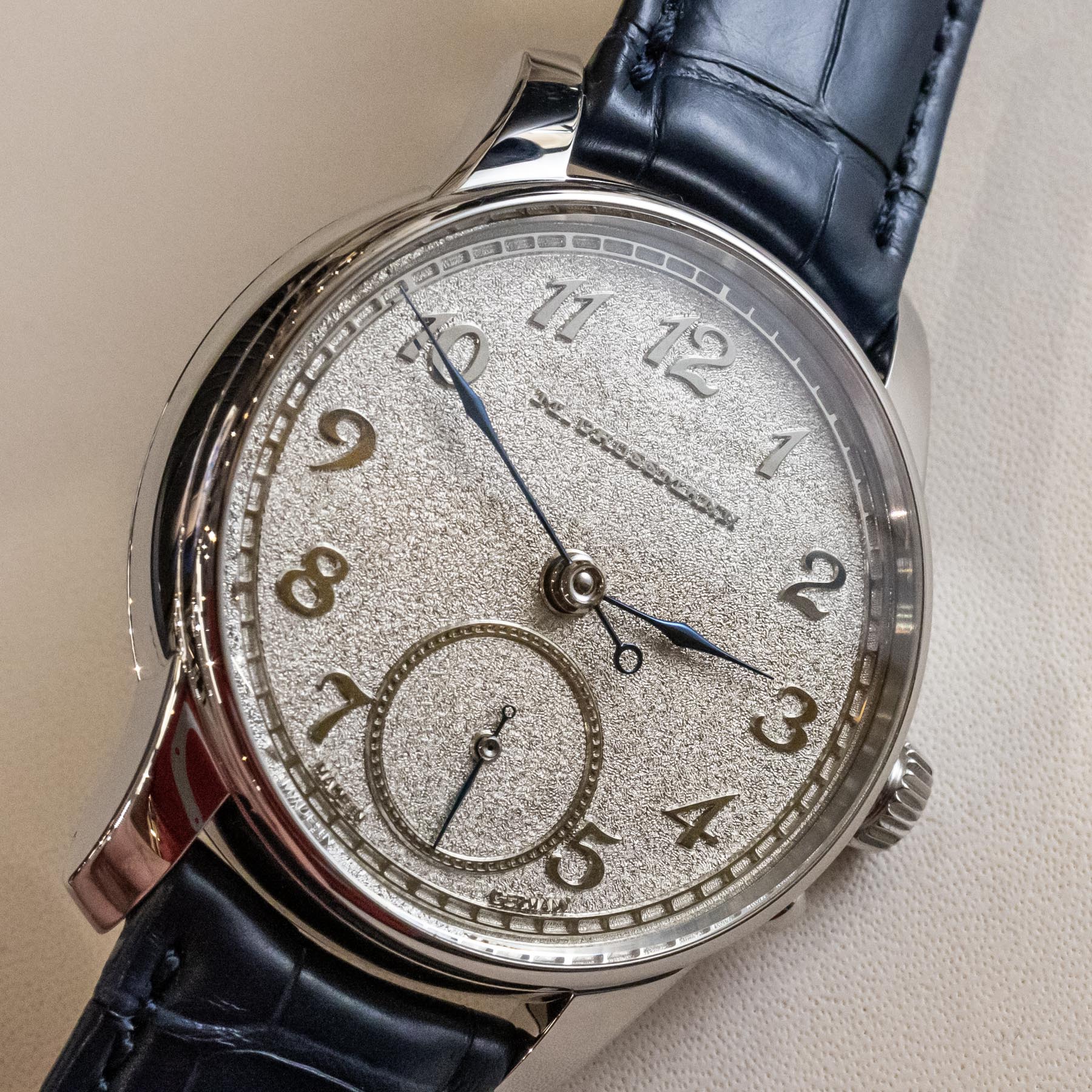 The Moritz Grossman Tremblage is a remarkable piece of watchmaking that boasts a very rare and beautifully done dial. In fact, there’s really not much out there like it save for the aforementioned handwerkskunst pieces from Lange that easily exceed six-figures. Though it’s not a limited edition, the annual output of a couple hundred watches per year should give you an idea of how few examples of these will be produced. Given the extraordinary dial and top-notch movement finishes, the Moritz Grossmann Tremblage is reasonably priced at approximately $36,000 in steel and $48,400 in rose gold. You can learn more at en.grossmann-uhren.com.