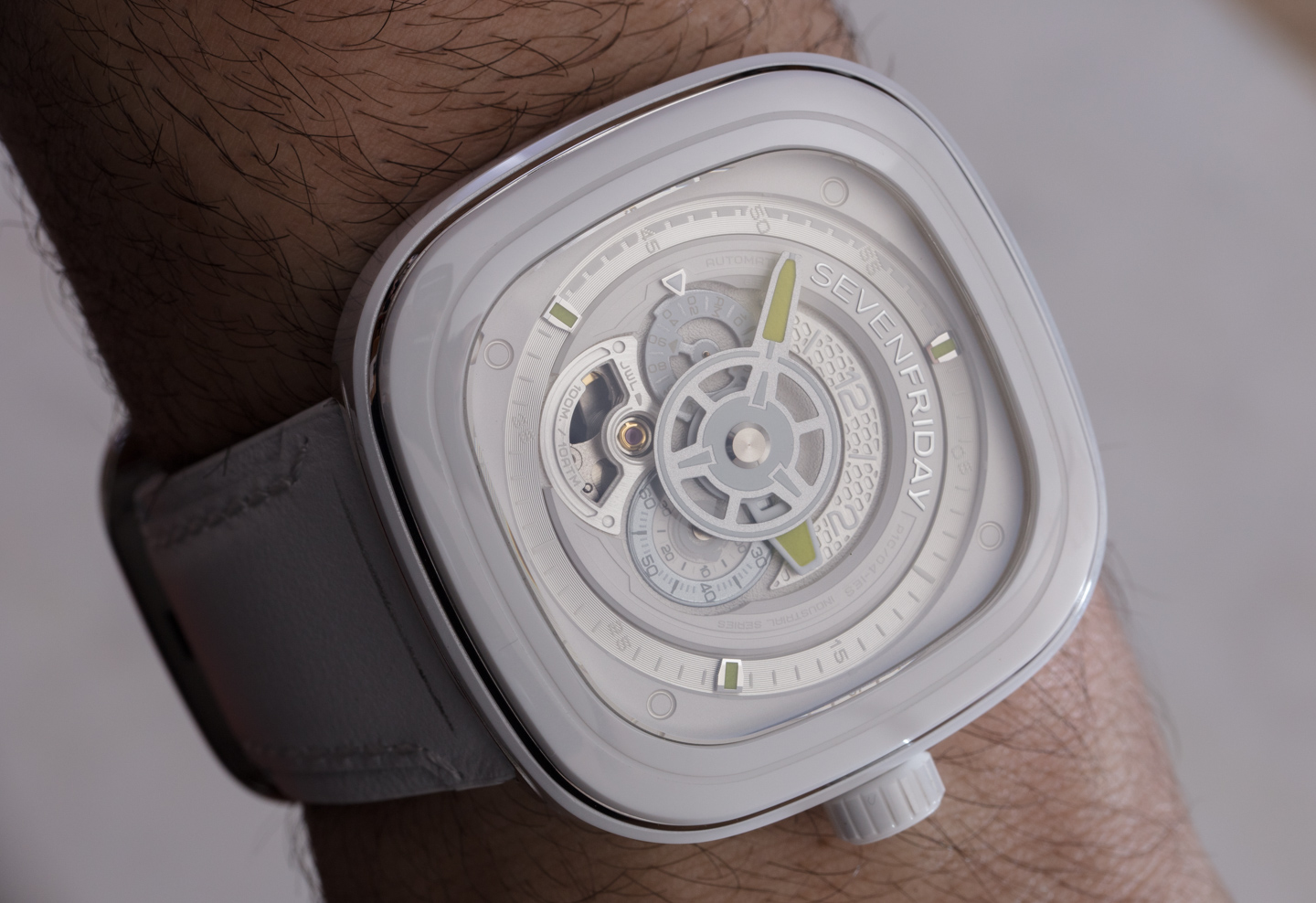 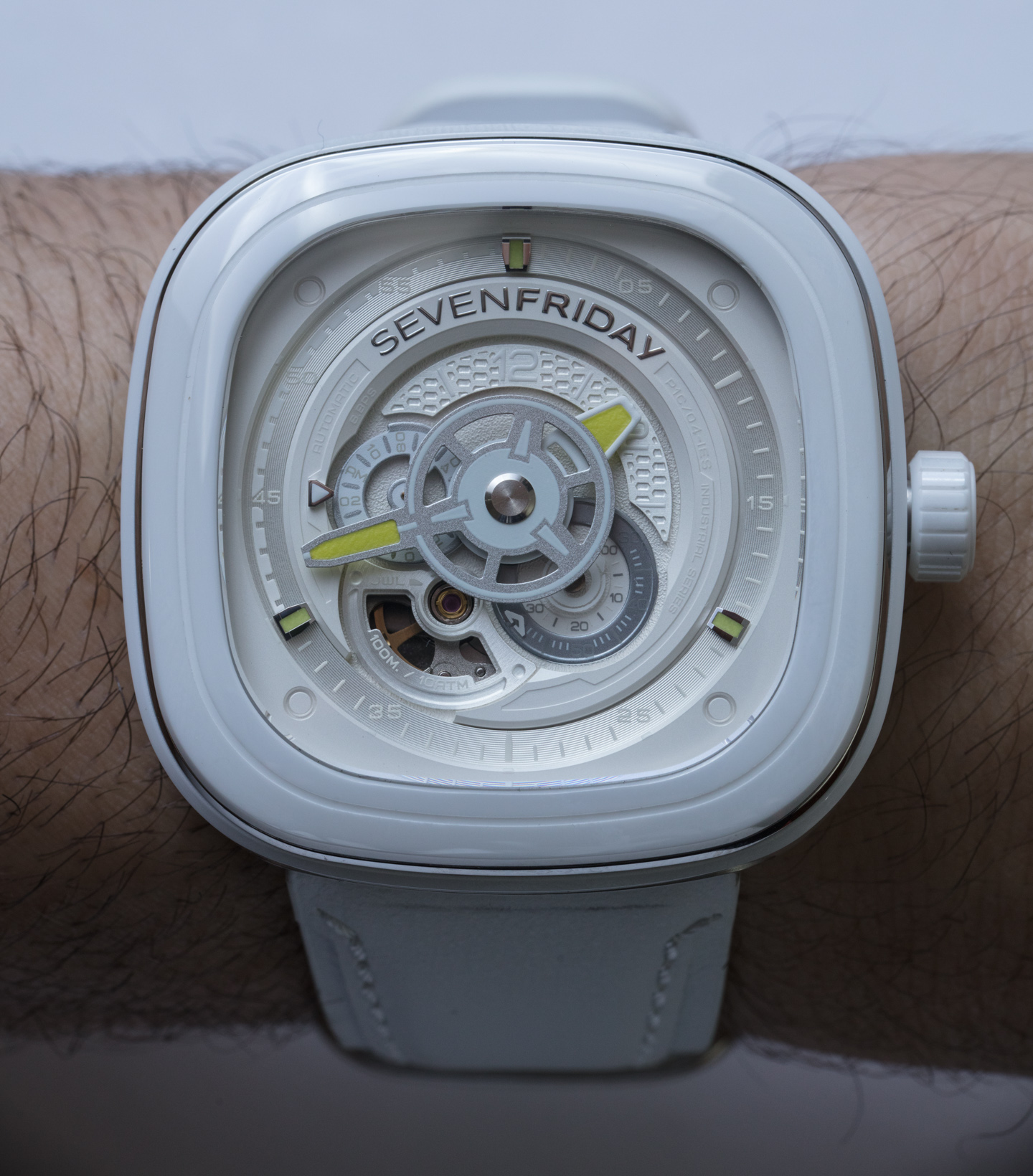 This still-fresh summer of 2021 watch from Swiss SevenFriday is both inspired by a cocktail and one of its best P1C models so far. I say that because it is easy to pass over the fact that the P1C/04 “Caipi” watch is the first generation of this model family to have a sapphire crystal. That’s not a big deal for most round-cased watches, but many SevenFriday watches, such as the P1C collection, have cushion-shaped (versus round) crystals over the dials. A non-circular piece of machined sapphire crystal is much more expensive than a round part (that apparently can be formed on relatively simple lathes). Sapphire crystals are more scratch resistant (by far) than the mineral crystals they replace. My belief is that, moving forward, SevenFriday will make sapphire crystals standard on more and more watches. Keep in mind the brand’s still-reasonable price point.

The white watch with hints of lime-green tones is bright and sparkly — and fun to wear. I will admit that the first thing I thought when putting on the crisp, white watch was, “How long until this starts to get dirty?” The good news is that my fear really only relates to the white leather strap, as the white ceramic case isn’t going to need anything but a wipe every now and then. At times, I feel like the watch is too bright — a bit like staring into the sun. It is still legible and very much a SevenFriday, with success in offering near-blinding visual draw. I would have called it the SevenFriday Supernova. 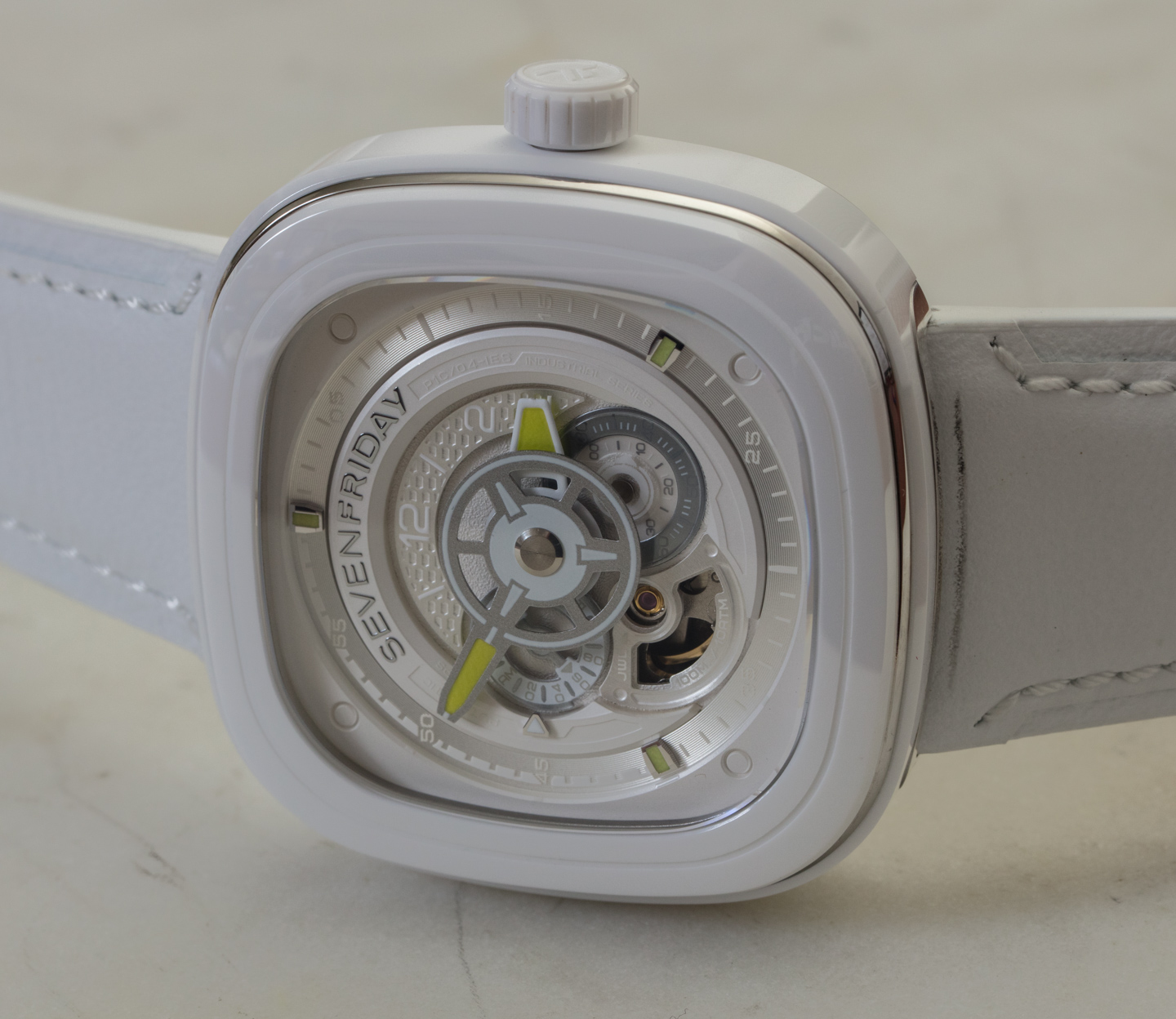 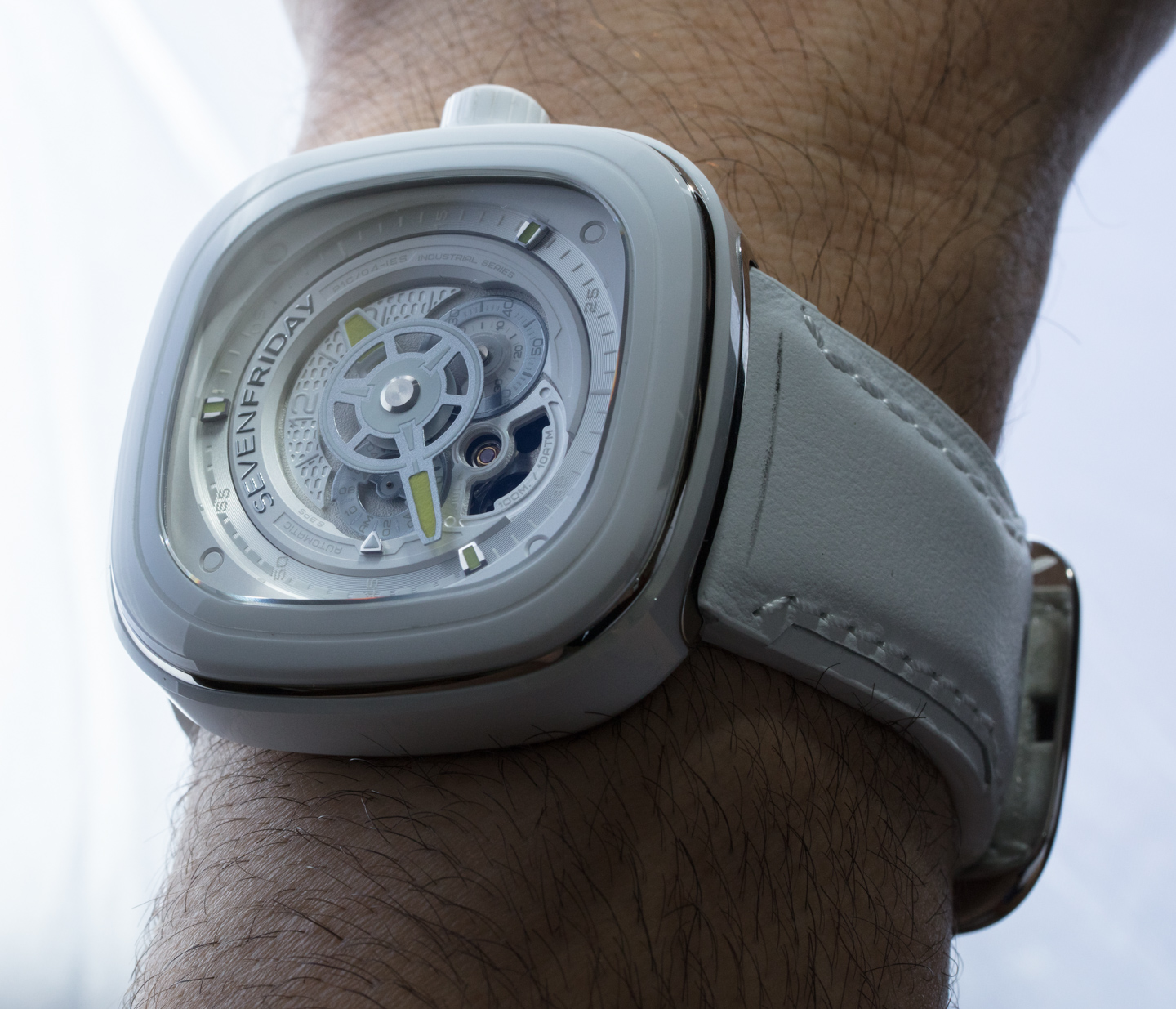 Alas, the more party-time inspiration for the P1C/04 watch is the popular and refreshing cocktail known as the Caipirinha. The national drink of Brazil is a sweet and sour affair that, thankfully, tends to be mixed more on the sugary side in a glass filled with as many limes as ice. 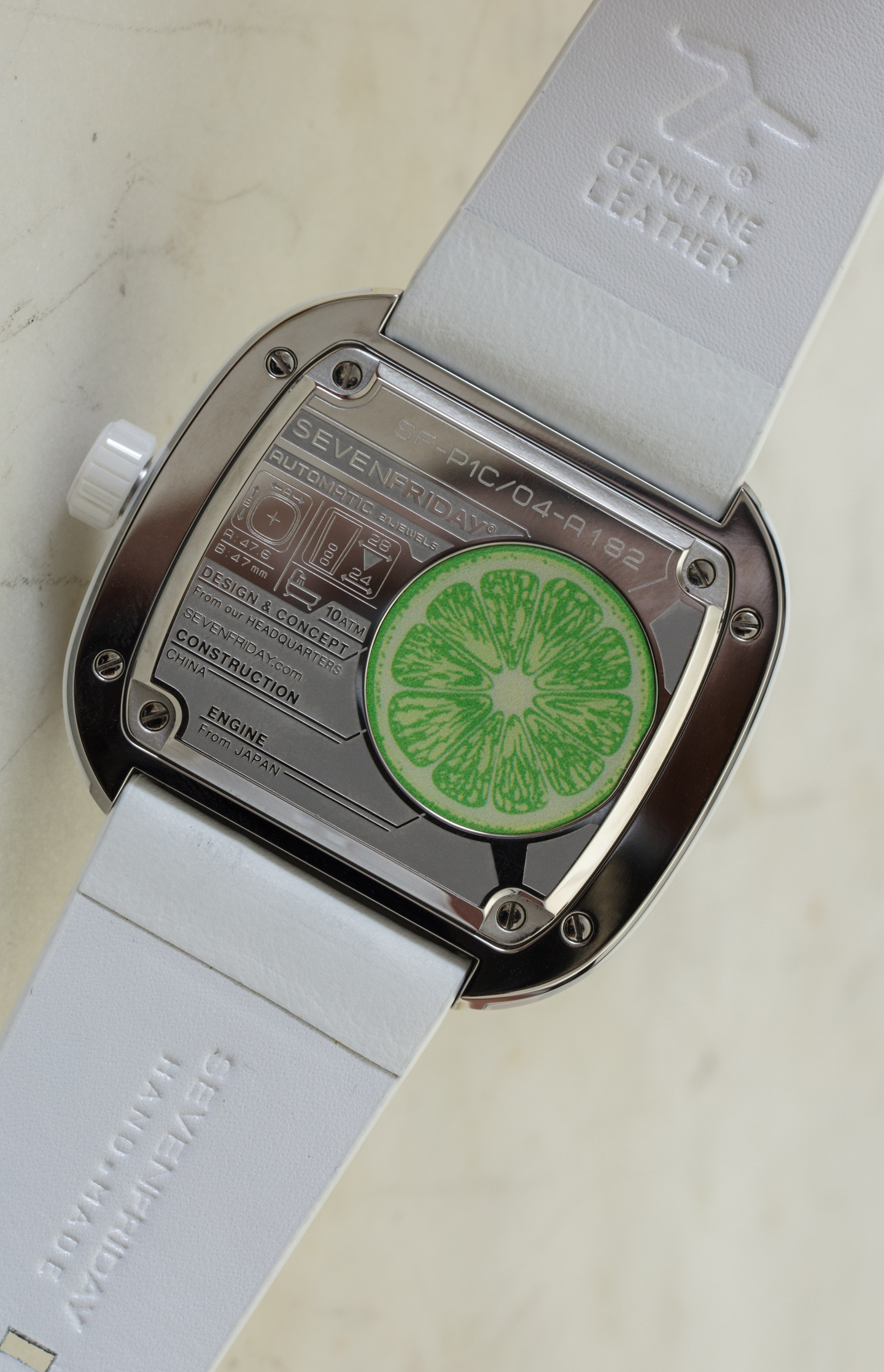 While many (many) people during the pandemic would have liked to enjoy a Caipirinha actually in Brazil, perhaps this celebratory watch intended to remind you of light clothing on hot nights in warm cities will be almost as satisfying. The cushion-shaped watch measures 47.6 x 47mm, and the 100-meter water-resistant construction is made from steel and white ceramic. Over the dial is a sapphire crystal and inside the case is a built-in NFC (near field communication) chip. This accessory allows you to register your watch, as well as use it to identify real vs. replica watches (yes, there are many fake SevenFriday watches out there).

The rear of the watch includes useful product technical specifications printed in a way that appears graphically designed. This particular version of the P1C watch has a lime slice motif in full color that is special to the P1C/04 Caipi edition watch. Inside the watch is a Japanese-made Miyota caliber 82S7 automatic movement. It operates at 3Hz with 40 hours of power reserve with discs being used for the hour and minute hands, as well as for the eccentric subsidiary seconds and synchronized 24-hour displays. SevenFriday is very open about the fact that even though their watches are designed in Switzerland (their headquarters is in Zurich), the brand’s affordable prices are contingent on working with Japanese and Chinese suppliers. There is nothing wrong with that, and SevenFriday is merely open about the same practices that many other Swiss brands prefer to “keep more discreet.” 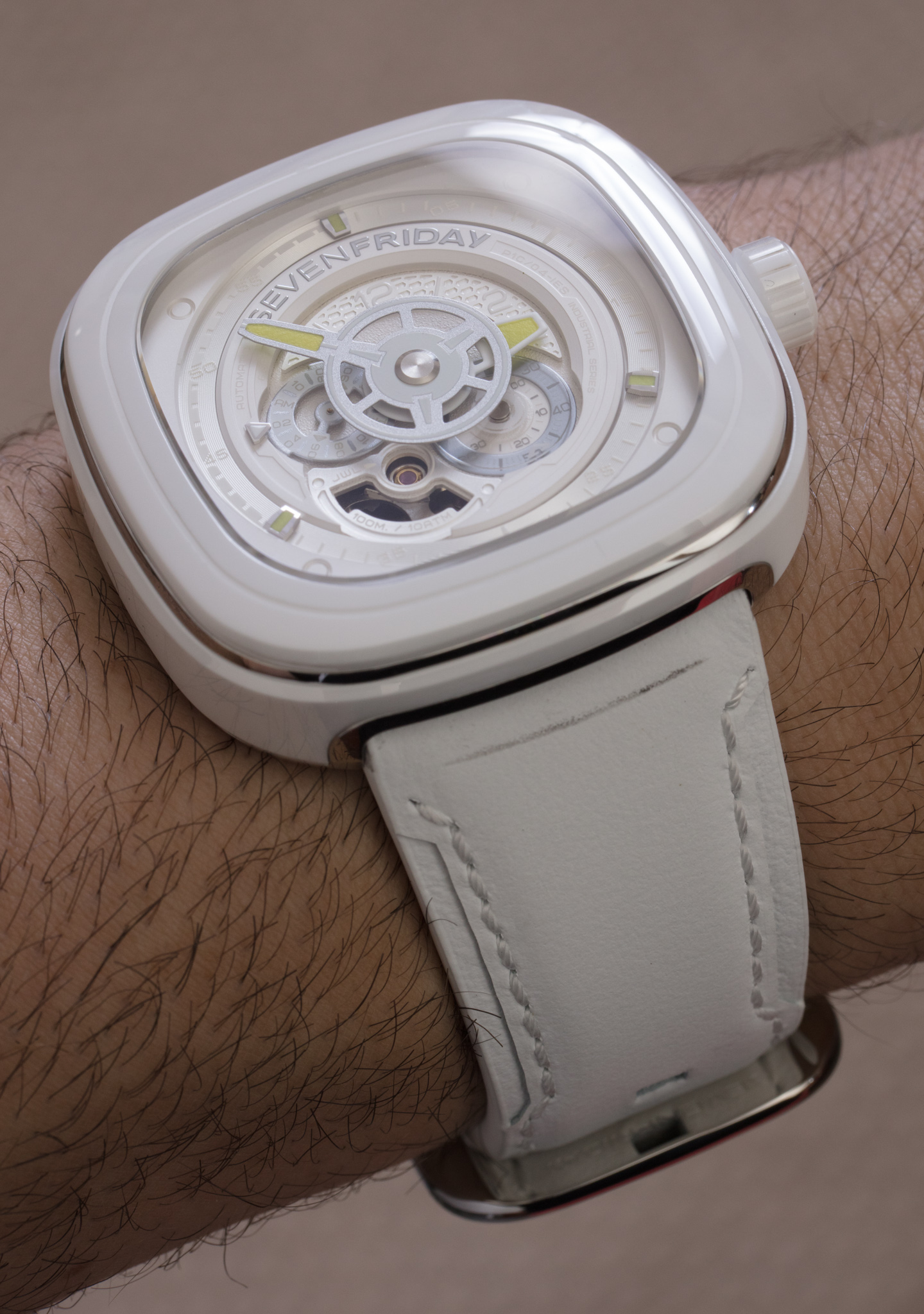 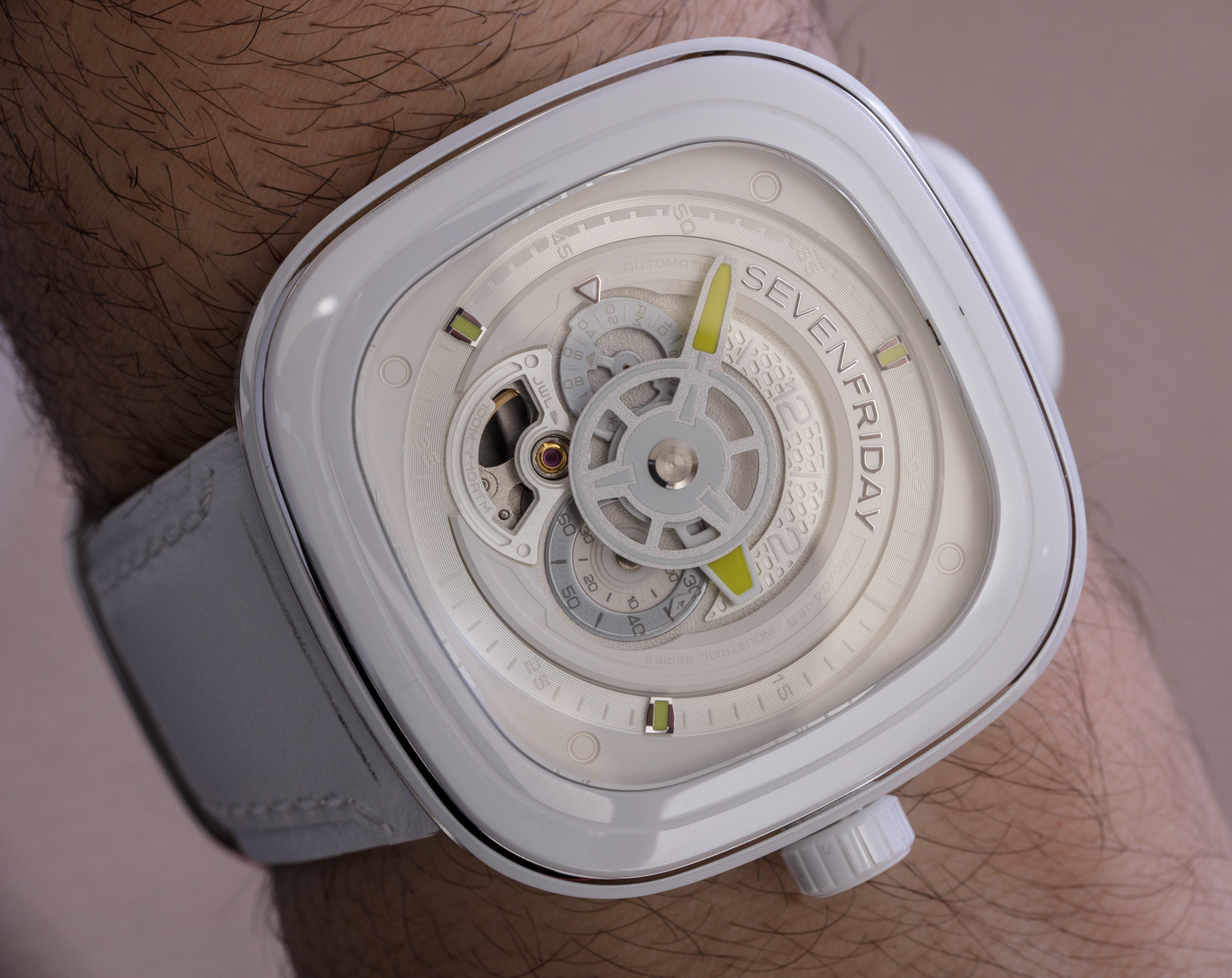 I really like the design of the white leather strap, as well as the sewn-on pattern segments. That said, the strap will likely get dirty quickly, and wearers might want to think about other strap options that might make sense. I wonder how it would look on a NATO-style strap toned to match the color of the Caipirinha the timepiece is inspired by? The dial’s silvery segments are said to be inspired by the cachaça, and the greenish hands and some hour markers (which is the lume color) match the color of the limes bathing in the drink. Wearing this lovely watch while imbibing evokes the refreshing sensations of summer. Price for the SevenFriday P1C/04 Caipi watch is $1,550 USD. Learn more or order at the SevenFriday website here.