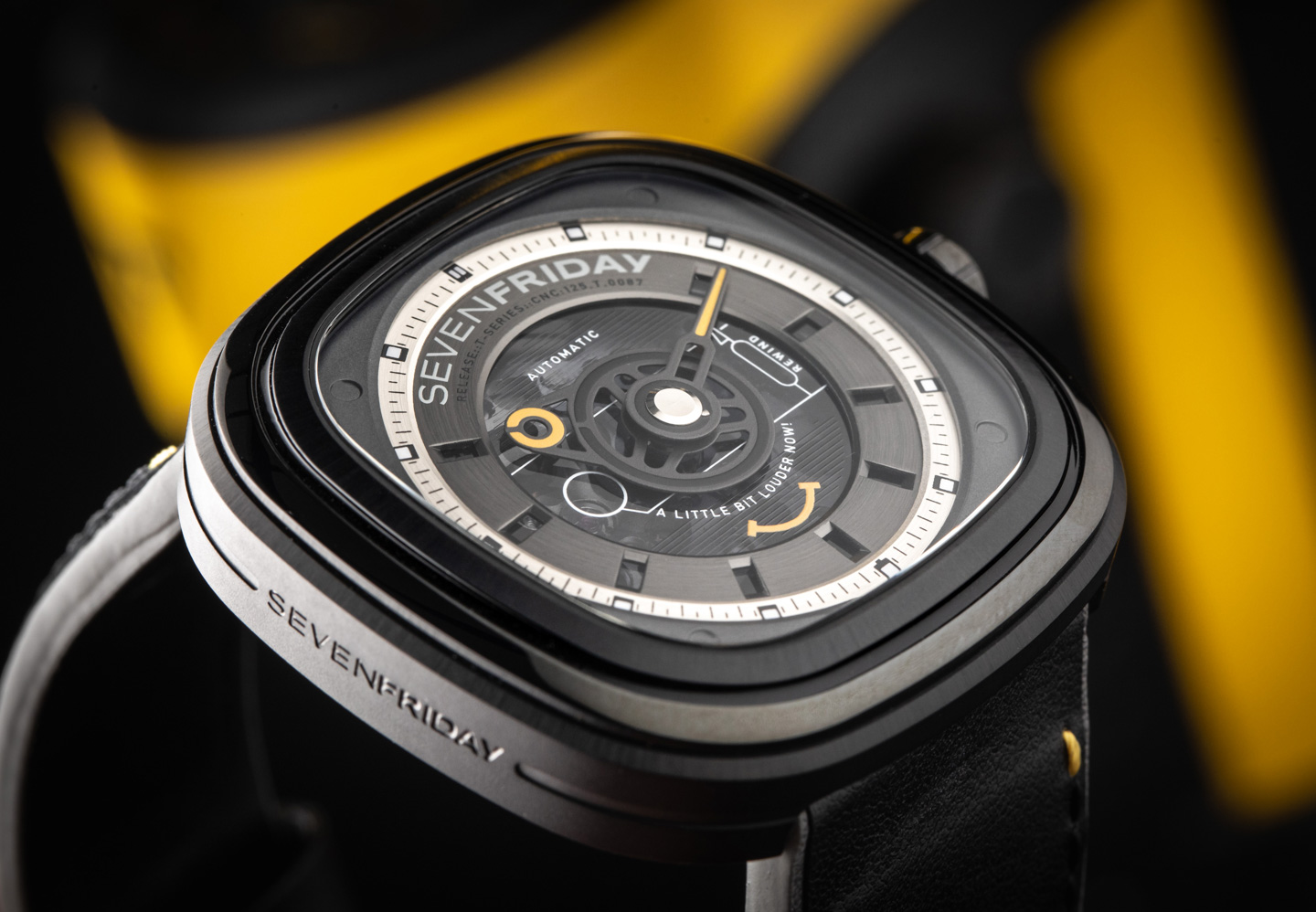 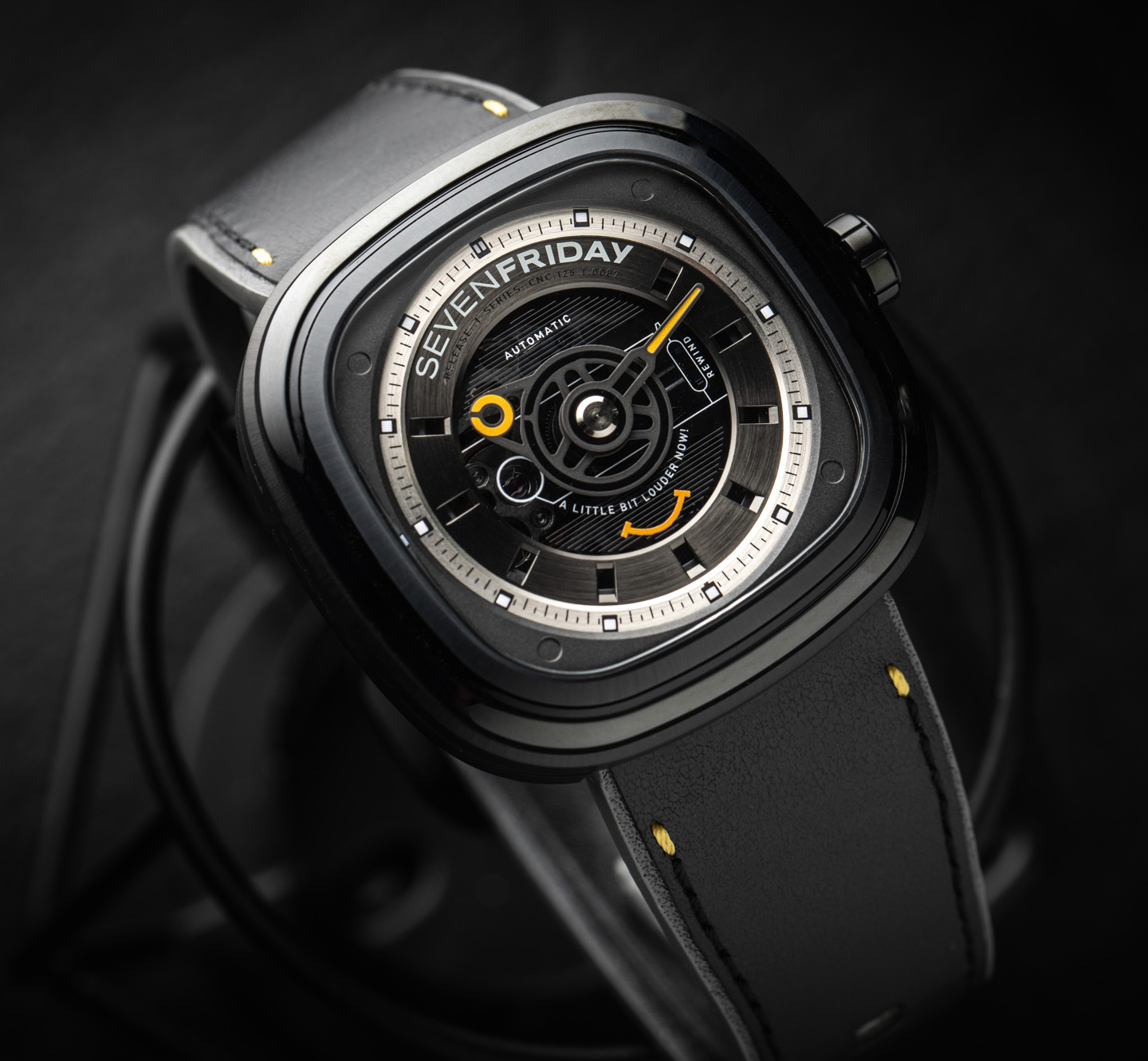 Back in 2015, Zurich-based watchmaker and lifestyle brand SevenFriday introduced its first limited-edition watch (the 99-piece P3/01 set), produced to help raise funds for Micah’s Voice. The non-profit, founded by Mr. Shawn Stockman of BoyzIIMen, helps families affected by autism. The relationship between Stockman and Swiss SevenFriday endured, with a series of activities that helped reinforce the core values of meaning and fun at the contemporary watch brand.

Now, in 2021, SevenFriday is launching its second major wristwatch creation for Micah’s Voice — the limited-edition T1/02 Micah’s Voice timepiece — as a special collaboration between the visionaries at SevenFriday and the legend that is Shawn Stockman. Once again, the proceeds will benefit families with children diagnosed with autism spectrum disorder. 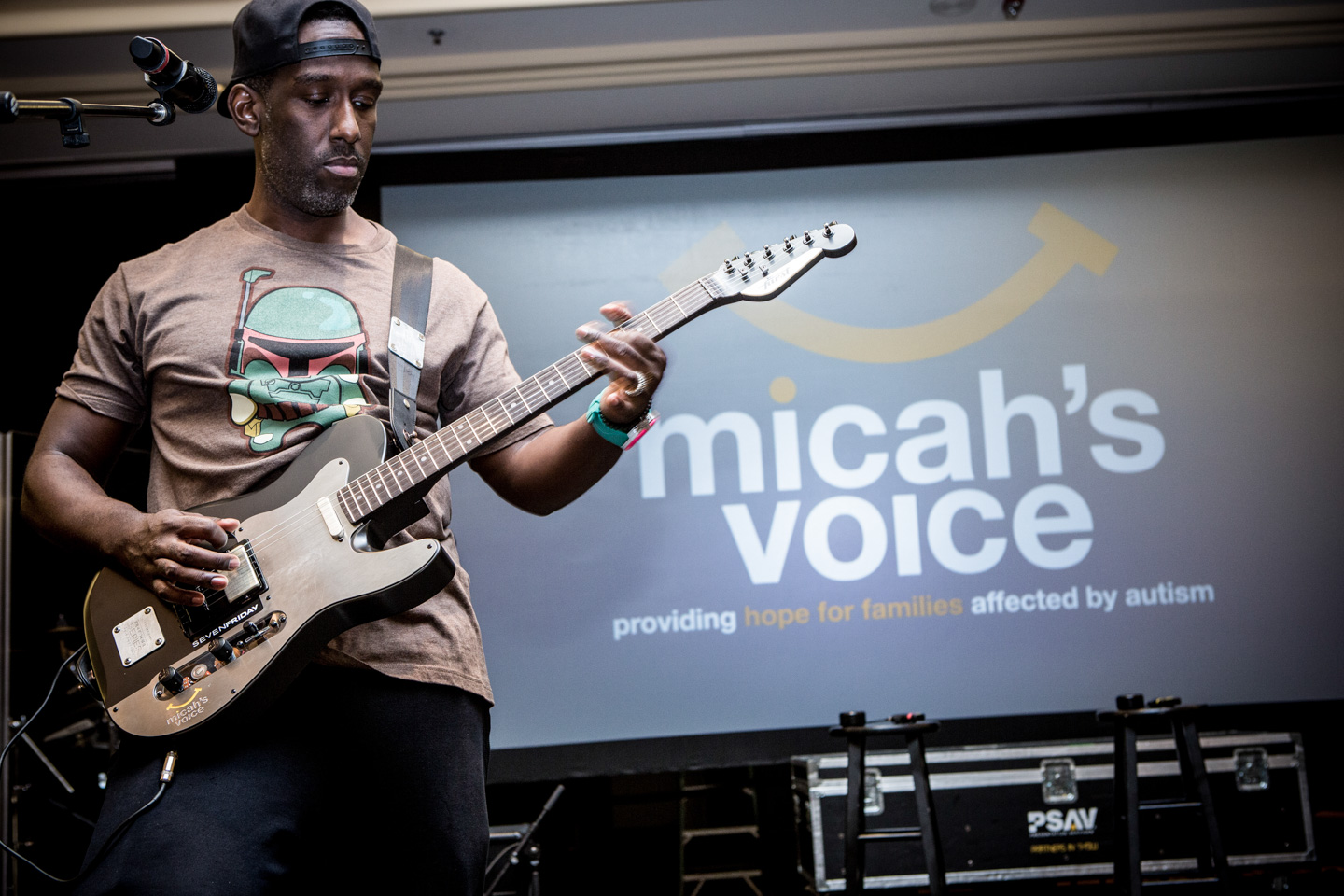 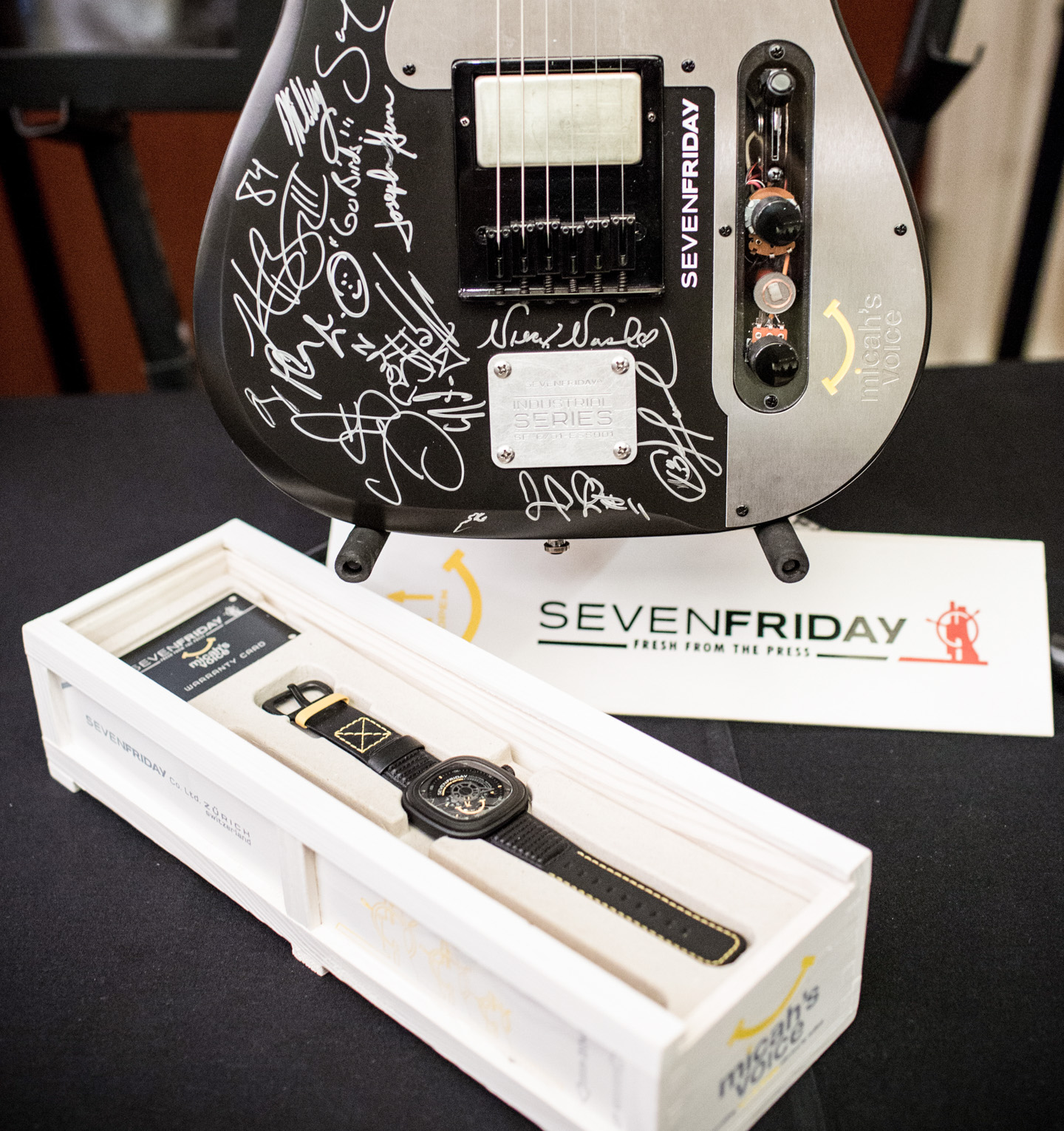 Based on the successful T-series of SevenFriday watches, this new limited edition is known as the SevenFriday T1/02 Micah’s Voice, and it will be produced as a set of just 100 pieces. The watch is among the most visually expressive yet from SevenFriday with a true “face” that includes eyes, nose, and mouth. Going with the theme, the timepiece also includes a special Micah’s Voice Riley the bear plush toy with the set. The T-series has a complex dial that includes several layers, including tinted sunglass lens material. SevenFriday also happens to produce sunglasses in addition to its wristwatch products.

Just above the smiley face on the T1/02 dial is the famous “A Little Bit Louder Now!” lyric from Shout, a hit “golden oldies” song beloved by so many that was originally released by The Isley Brothers in 1959. The watch itself has a cushion-shaped case in black PVD-coated steel that is water-resistant to 30 meters and about 45mm-wide (while being just under 13mm-thick). Over the dial is a K1 mineral crystal, and attached to the case is a black calf-leather strap with yellow stitching accents to match the watch dial. 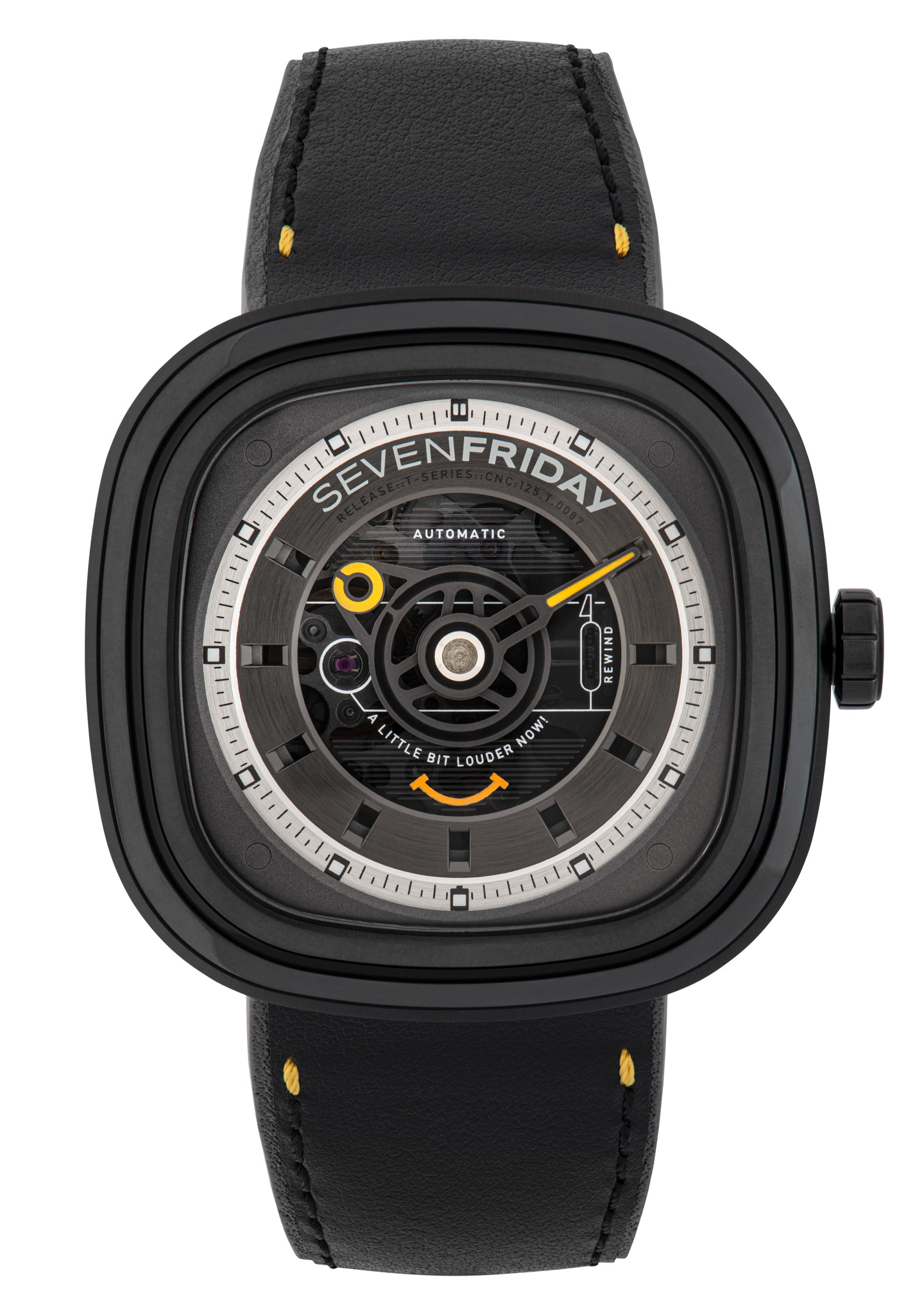 Inside the watch is a combination of traditional mechanical watch technology and high-tech traceability features such as an NFC (near field communication) chip that authenticates the watch while giving users extra ownership options via the SevenFriday app. To learn more about the 2021 limited edition of 100 pieces SevenFriday T1/02 Micah’s Voice watch, (priced at $988 USD, order here) aBlogtoWatch spoke with Micah’s Voice founder Shawn Stockman:

aBlogtoWatch: Are limited-edition watches a good way to raise money for a charity? The concept is certainly very popular.

Shawn Stockman: First, let me take the time and thank you, Ariel, for talking to me! We’ve known each other for quite some time, and I appreciate you giving me this platform to speak on what I’ve considered a long-time passion of mine!

I do think limited-edition watches are a great way to raise money for charity for a couple reasons. It doesn’t just raise money, but in this particular case, with my longtime partnership with Dan Neiderer, SevenFriday, and Micah’s Voice, it raises awareness. The watch is a piece of a much bigger picture, as opposed to it being just a “status symbol.” This is a “life-changing symbol.” Anyone who acquires the T1/02 can proudly say that they helped make a child’s life, a family’s life, a little better because you helped provide services that are sorely needed for autistic children. Secondly, if it weren’t for the money raised from the first limited-edition Micah’s Voice SevenFriday collaboration years ago, my wife Sharhonda and I wouldn’t have a leg to stand on with our organization. If marketed and executed properly and tastefully, limited-edition watches can work well in this context.

aBlogtoWatch: Micah’s Voice is a non-profit charity foundation that you set up to help parents with children who have autism. What’s the hardest thing about setting up your own charity? And what does it take to keep it going with fresh energy and momentum?

Shawn Stockman: The hardest thing my wife and I had to face is the ongoing support for the cause. There are so many people who do not understand what autism is, let alone be willing to give their hard-earned money to something many people can’t directly relate to. But that’s quickly changing, mainly because the number of children with autism is growing rapidly! Over 70 million people around the world have autism, so if you’re not affected by the condition personally, it’s almost certain you know someone who is. But there is very little advocacy from our government, and so many people have to fend for themselves. And it’s hard to raise money to keep things consistent. But what keeps it fresh are moments like these, creating something dope for people to wear and providing something new for advocates, old and new.

aBlogtoWatch: Over at least the last 20 years, you’ve been exposed to a great number of people wearing nice watches in the music and show business industries. How important is it to have a nice watch, and how many people you’ve encountered don’t just like nice watches, but also like more original watches from some of the more novel watchmakers such as SevenFriday?

Shawn Stockman: I believe a watch says a lot about a person. When you see what’s on a person’s wrist, it can tell you a lot about them, from status to personality. You see what’s most important to them at that moment, the type of statement they’re trying to make. You can tell if a person is truly into watches or if they’re wearing a certain piece just to “stunt.” The watch community is very diverse. I know people who have extremely high-end super-exclusive pieces, and I know those who love simple ones too. I know quite a few “watch geeks” like myself who understand that watches of all kinds can be appreciated. A novel watches on a person’s wrist tells me this man/woman has an understanding of watch collecting that’s deeper than just purchasing the “usual suspects.” And most of the time, those people are really cool and down-to-earth human beings!

Shawn Stockman: I was enamored with the brand years ago when they first came out when I discovered them on IG. I immediately had my folks reach out to the company just to acknowledge them. That turned into actually meeting Dan [Neiderer] soon after, and many years later, he and I are really good friends. He’s one of the most genuine people I know, and our philosophies on life and watches are a lot alike. He’s a “hold no punches” type of dude, and I respect that! He understands and follows his philosophy through his vision for his timepieces, and that’s to live every day like it’s “Friday.”

aBlogtoWatch: These days, there is an expectation that entertainment celebrities not only provide fun and distraction but should also serve as role models. How have these new pressures influenced the decisions you make while you’re not making or performing music?

Shawn Stockman: I never took what I do for granted. I embraced long ago that being as popular as I was blessed to be comes with great responsibility. But having all of this attention, it was important for me to find the purpose behind it! I believe what I’m doing with Danny, with this organization my wife and I have built, I have found the true reason why my career has been as big as it’s been. I plan on using that influence to help as many people on this earth as I can.

aBlogtoWatch: Finally, tell us a little bit about the new limited-edition T1/02 watch you created with SevenFriday to benefit Micah’s Voice. What are some of your favorite design elements, and what are some special details that you’d like other watch lovers to notice?

Shawn Stockman: The T1/02 is the second time I was actually able to have design input on a timepiece, and I’m so damn proud and excited about it! It was important that the watch was not only comfortable but also practical enough to wear every day with everything. The black and silver dial with the pop of “Micah’s Voice yellow” on the hands and on our logo right above the 6 o’clock marker is the perfect accent that makes it not too serious. Each purchase comes with a cute and very softy and squishy bear we call “Riley.” This bear has some edge to him, but he loves hugs, too! And the cool little quirk about him is when the watch is on 10 and 2, with the smile down below, it kind of resembles Riley’s face! Just a cute little nod for the small ones of those who purchase the watch. Again, I love this watch because of its comfort and diversity. It’s a conversation piece, and what makes it even better is that if you have this piece, you are a part of a very conscious, fly, and exclusive club. Welcome to the gang!