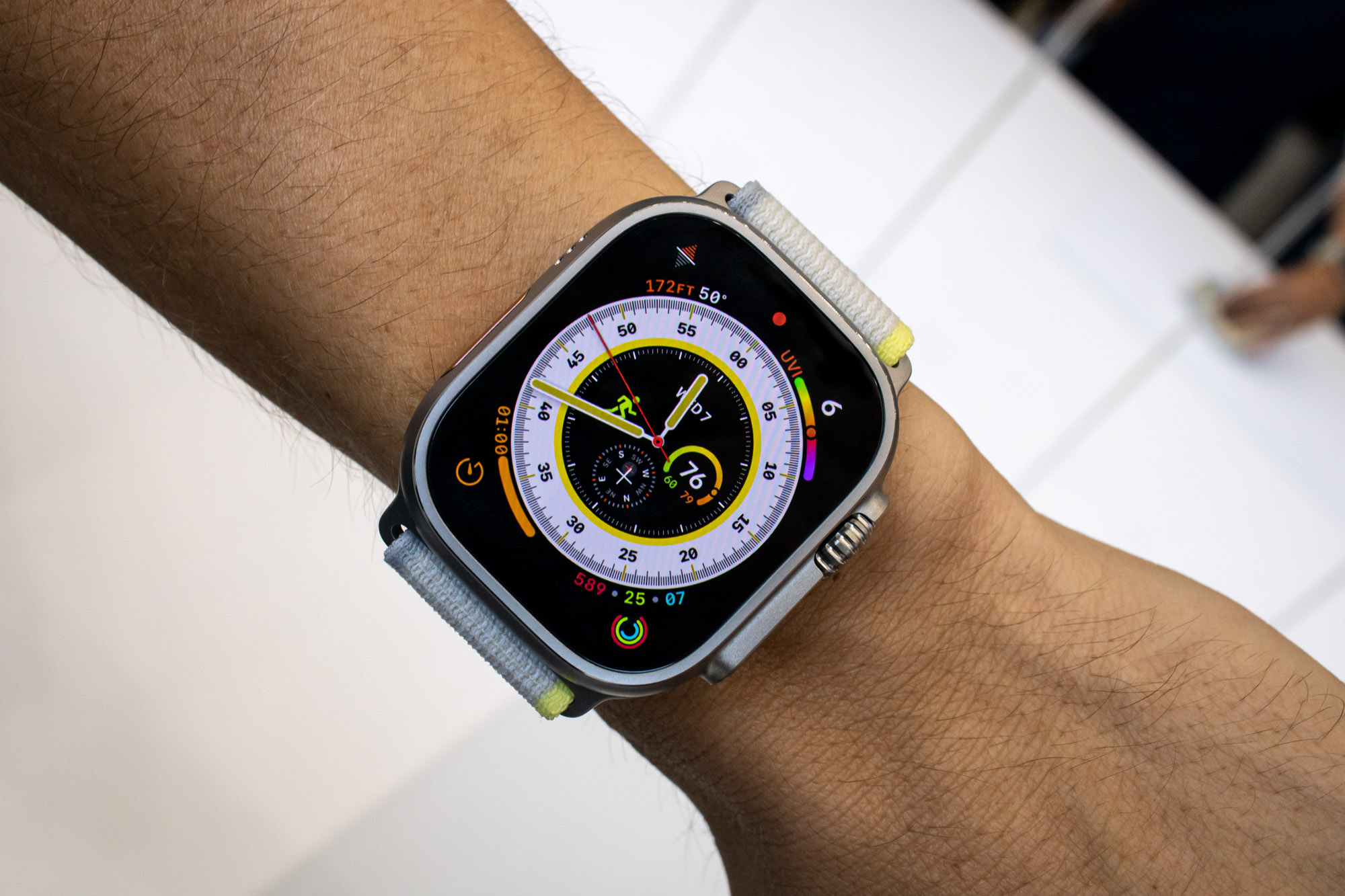 As watch enthusiasts, we often like to write off smartwatches as not being “real” timepieces. However, regardless of our personal thoughts on smartwatches and connected devices, in general, it is impossible to have a discussion about contemporary wristwatches in 2022 without including the Apple Watch. Whether you consider it the ultimate watch or the anti-watch, it’s undeniable that the Apple Watch is easily one of the most important timepieces to appear within the last decade, and it has become an integral part of this industry. 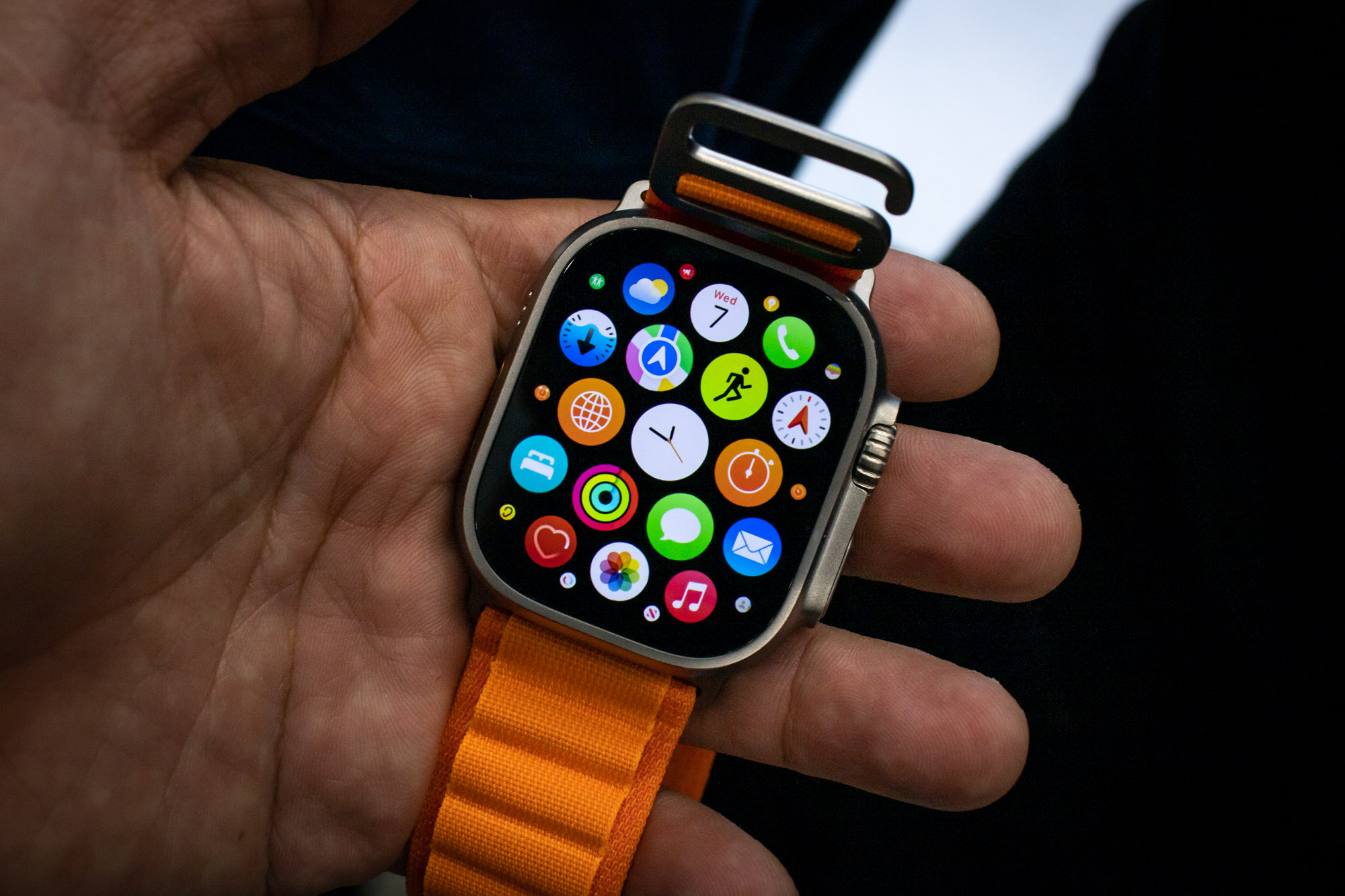 For die-hard horology enthusiasts, an Apple Watch will never fully replace the role that mechanical timepieces play in their lives, but that does not mean that bonafide watch nerds can’t also wear smartwatches. Some people go with the “double-wristing” approach, wherein they wear their favorite mechanical timepiece on one wrist and an Apple Watch on the other, which allows them to indulge in their horological passion without sacrificing their notifications and health tracking features. Alternatively, there are other people like myself who wear a traditional wristwatch the majority of the time, but opt for a connected device as their sports watch, simply because it can do countless things that aren’t possible with a mechanical timepiece, such as measuring fitness metrics and tracking runs and bike rides with GPS functionality. For someone like me, a smartwatch isn’t an all-day, everyday kind of timepiece but rather a piece of sports equipment, similar to a diver’s mask or a pair of running shoes. Additionally, I’m clearly not the only one who sees the merit of connected devices as sports watches, because alongside the new Apple Watch Series 8 and SE models is the all-new Apple Watch Ultra, which is designed specifically for active outdoor use and offers additional features and increased durability, allowing it to be your do-everything sports watch that can even be used for scuba diving. 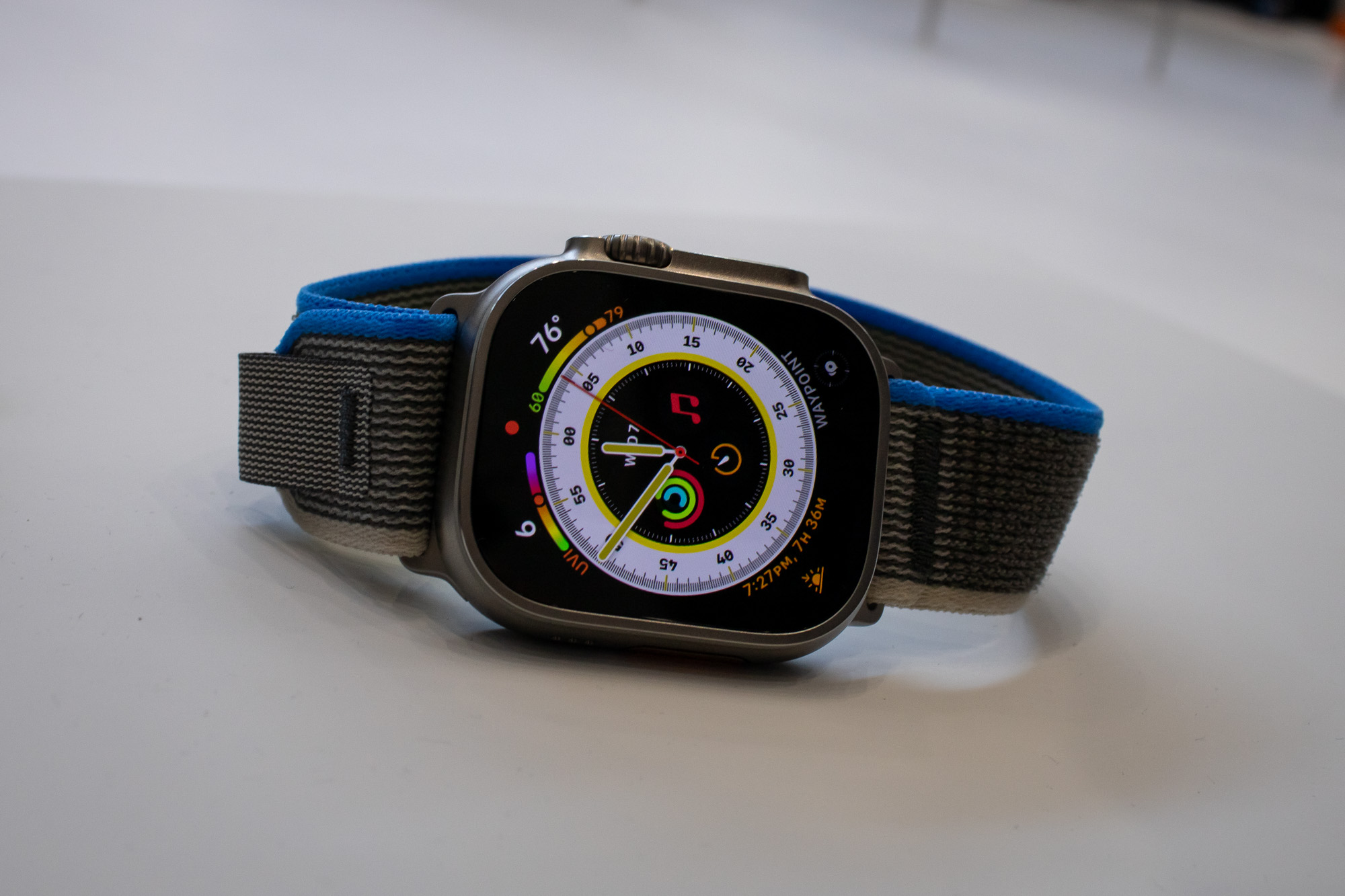 The new Apple Watch Ultra offers all of the same advanced technologies that you will find on the new generation of Series 8 watches, including improved health tracking and even a car crash detection feature. However, rather than being a “Pro” model that is simply a more advanced version of the standard option (like the iPhone Pro), the Apple Watch Ultra also places a significant emphasis on durability and adventure-ready features. The 49mm case of the Apple Watch Ultra is crafted from titanium, and it offers a different and more utilitarian profile than previous Apple Watch case designs. In addition to featuring an additional user-assignable button (named the “Action Button”) located on the 9 o’clock side of the case, the digital crown has been made larger with more pronounced grooves to make it easier to operate while wearing gloves. Additionally, the case has been extended on the 3 o’clock side surrounding the crown to offer protection against impacts, while a flat sapphire crystal sits on top of the case to protect the screen against scratches. 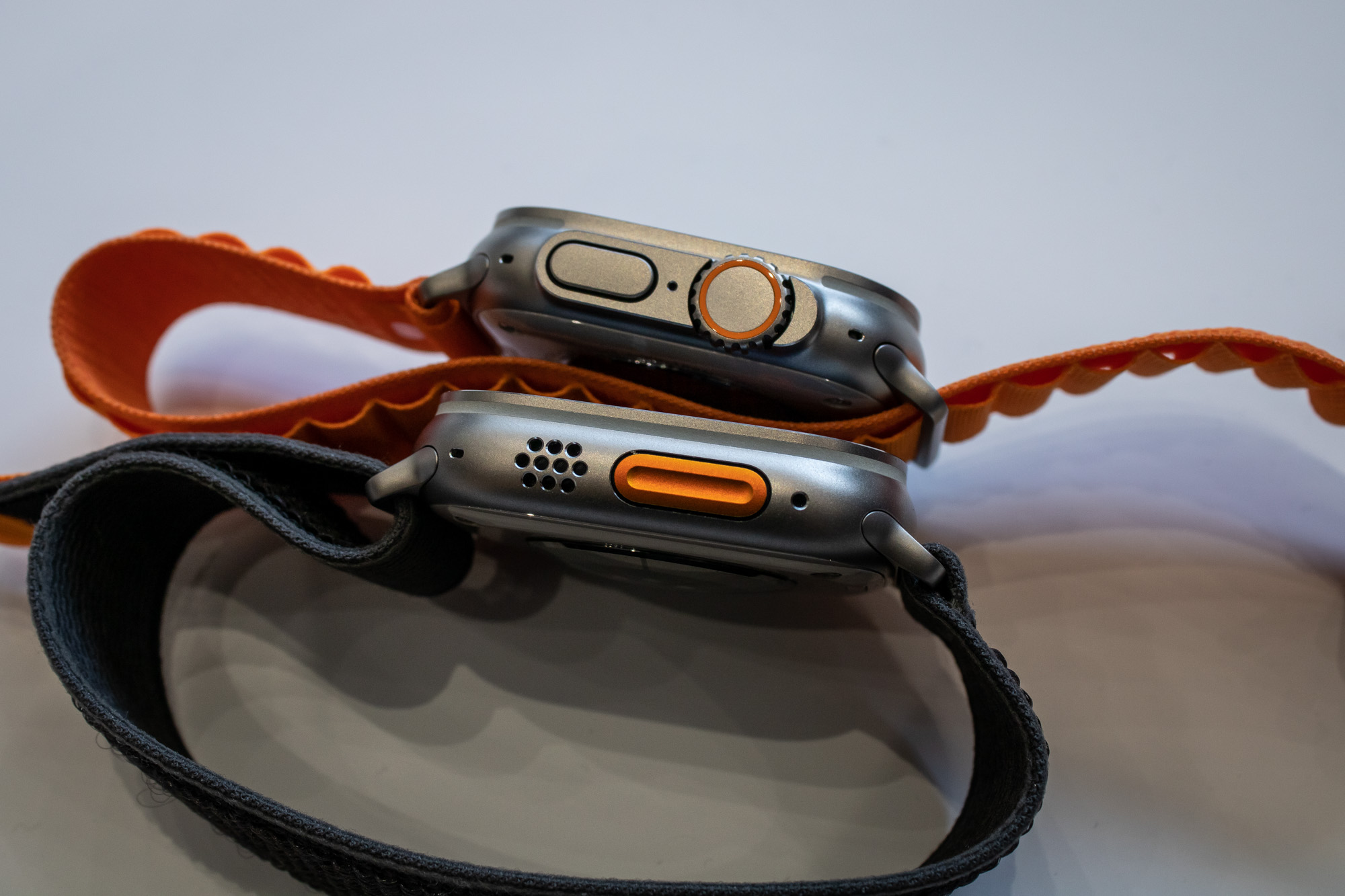 It’s important to note that while the case of the Apple Watch Ultra is officially listed as being 49mm, Apple measures its watches vertically rather than horizontally, and since there are virtually no lugs protruding from the case, the Apple Watch Ultra will be far more compact on the wrist than its on-paper 49mm case size might otherwise suggest. As you can see from the photos of the watch on my 6.75” wrist, the Apple Watch Ultra is undeniably a large timepiece, but it certainly doesn’t appear to be the 49mm behemoth that its officially listed specs would indicate. Plus, the fact that it is made out of lightweight titanium further helps to keep things comfortable and manageable on the wrist while still offering a large and highly visible display. 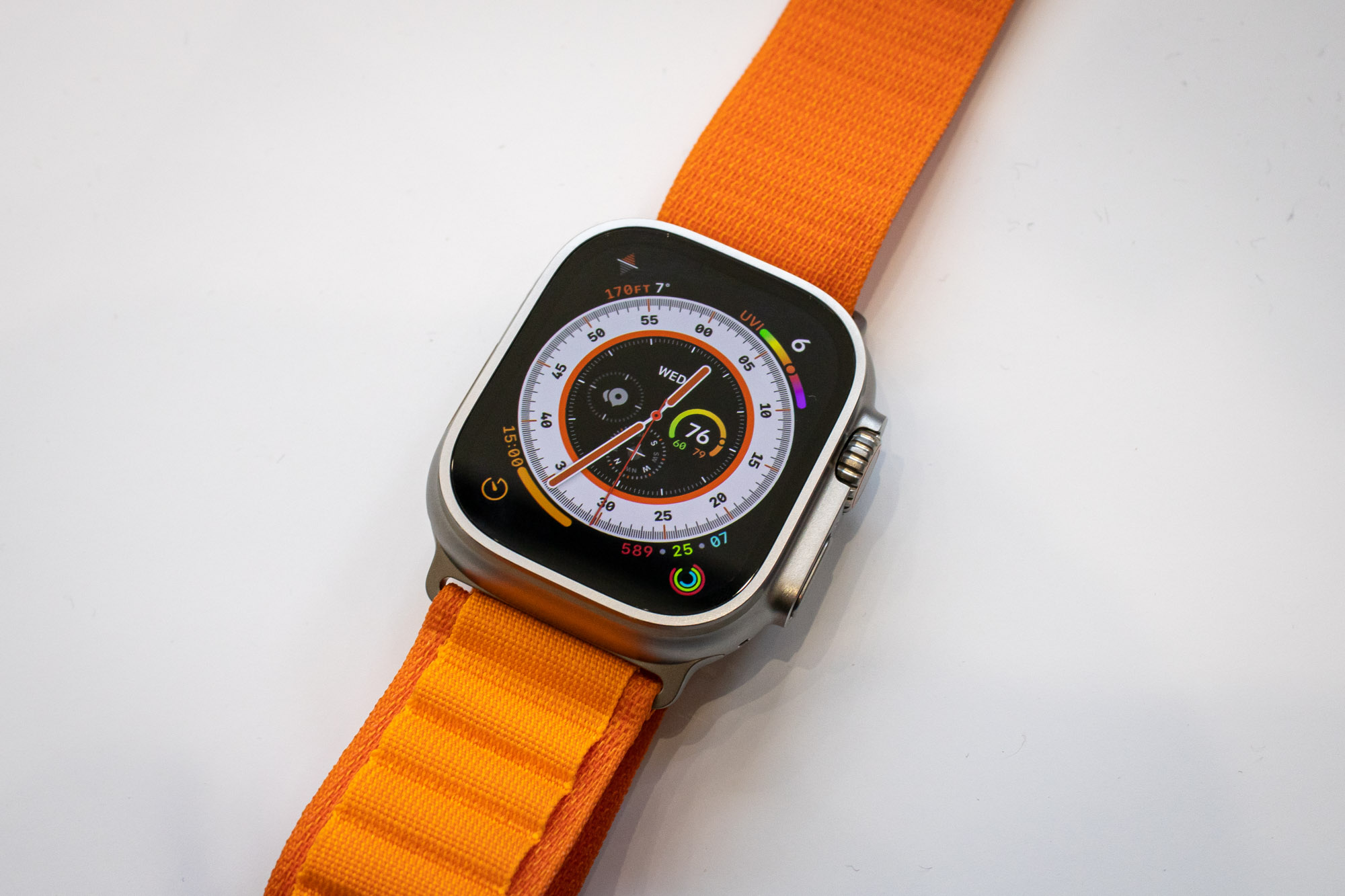 With that in mind, the extra case size of the Apple Watch Ultra isn’t just about offering a bigger screen and increasing visibility. Beyond featuring additional speakers and microphones so that it can be better suited for outdoor use, the case of the Apple Watch Ultra is twice as water-resistant as previous editions with a depth rating of 100 meters. Additionally, the model complies with EN13319 (the international standard for recreational dive computers and depth gauges), and it even includes a depth gauge with a suite of built-in features that allow it to function as a proper dive computer. Beyond its underwater capabilities, the Apple Watch Ultra also comes with a new “Wayfinder” face that offers a customizable heads-up-display with up to eight different complications for tracking outdoor excursions, along with an advanced dynamic compass app, and a “Backtrack” feature that enables wearers to use the watch’s built-in GPS to find their way back to locations such as a trailheads or campsites in the event that they venture too far off course or get lost in the wilderness. 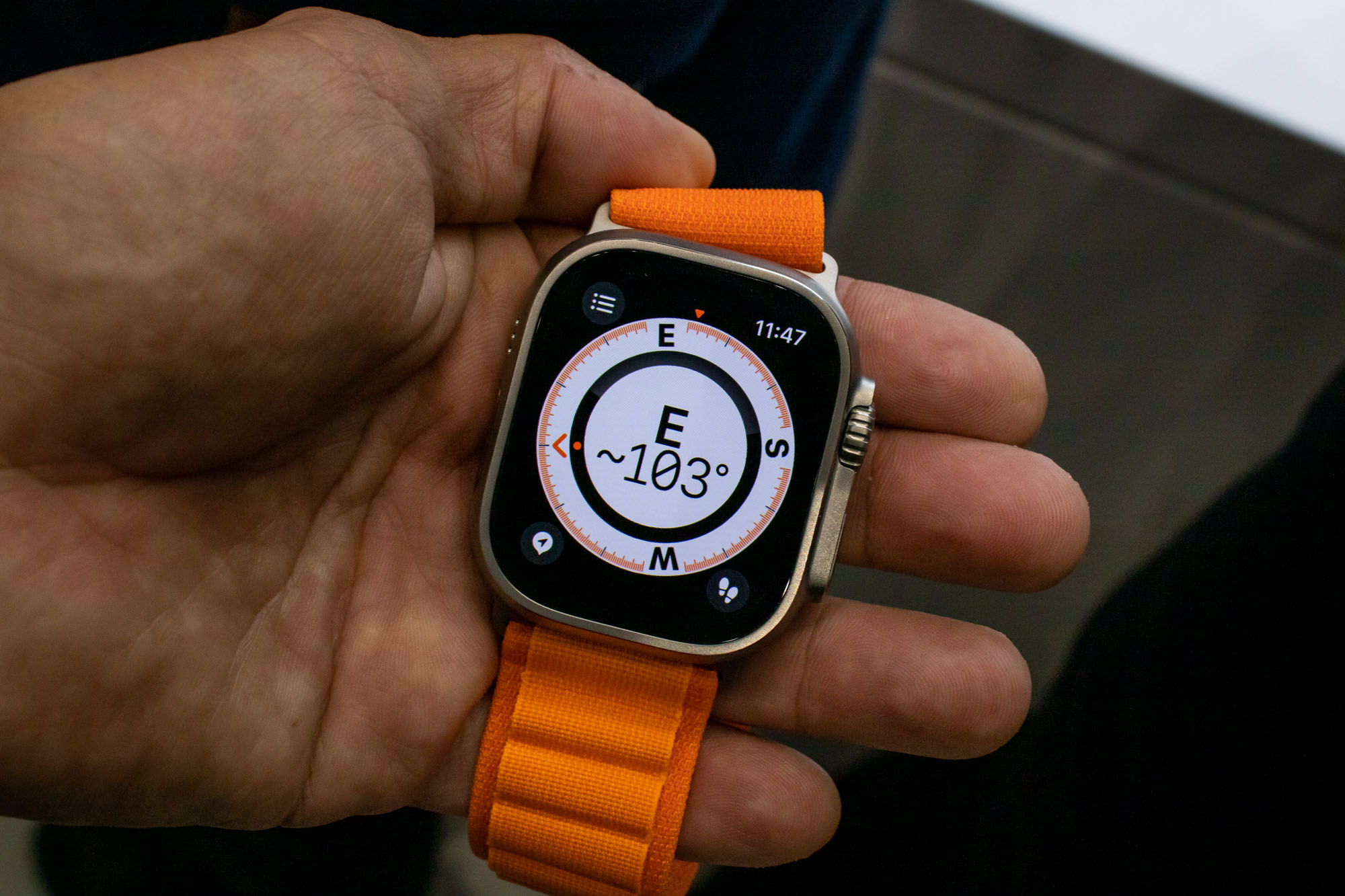 In addition to being able to calculate decompression stops while diving and helping lost hikers find their way back home, the Apple Watch Ultra also features a number of other outdoor-oriented features such as an extra-bright Always-On Retina display (2000 nits) for increased legibility in direct sunlight, along with a “Night Mode” setting that removes the white and blue light from the screen to create an entirely red and black display that offers maximum visibility in the dark. Additionally, given that the Apple Watch Ultra is specifically designed for outdoor excursions, its battery life has been significantly extended, and Apple claims that it can last up to 36 hours on a single charge, which can be extended up to 60 hours using a low power battery optimization feature that will be coming out as an update later this fall. 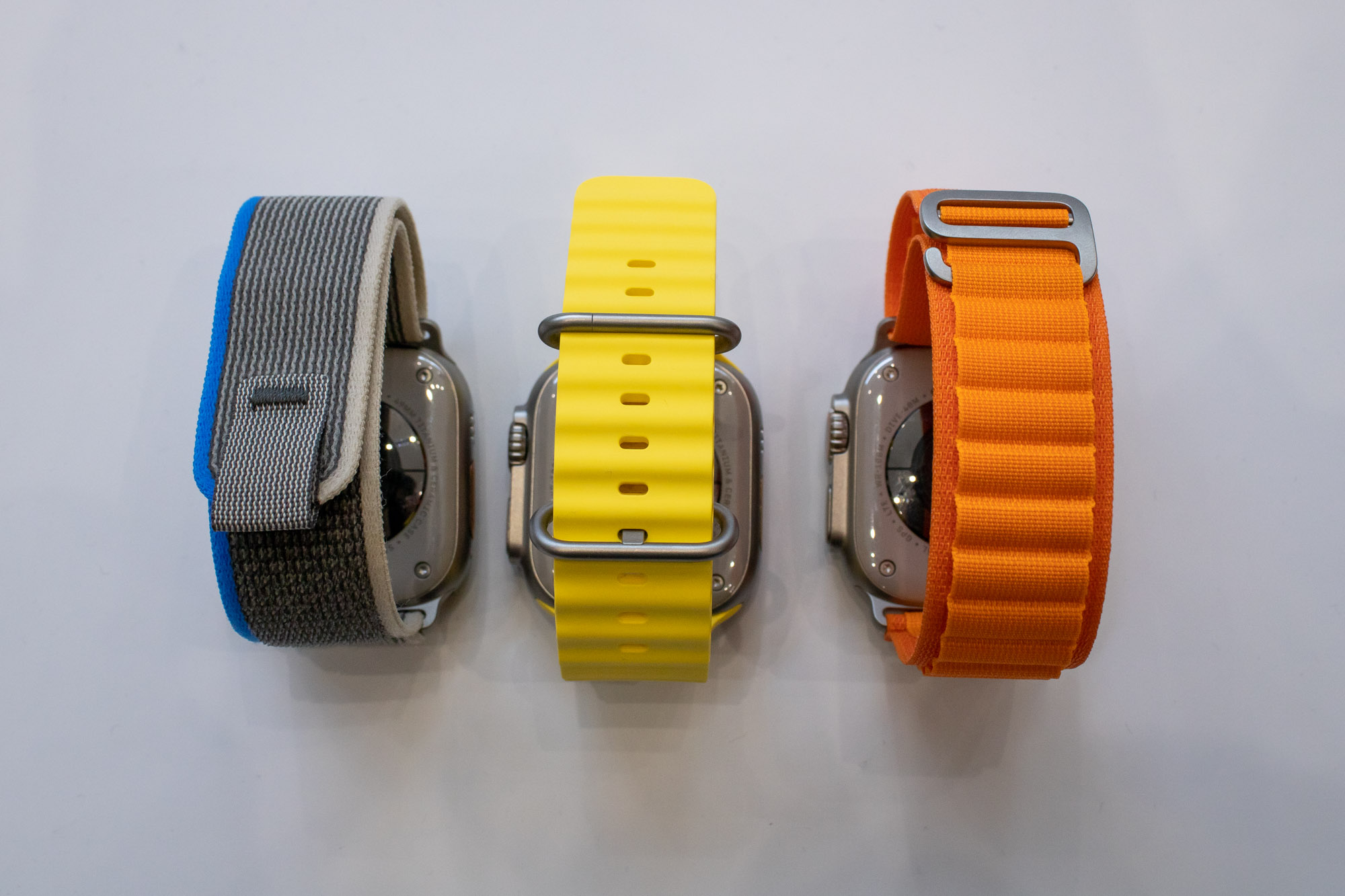 Given that the Apple Watch Ultra is intended to be a multi-purpose outdoor adventure timepiece, three different strap options are being offered for the new model, and each one is intended for a different type of sport or outdoor activity. The Alpine Loop is a single-piece nylon strap with a hook-style clasp that is built for hiking and general-purpose outdoor activities. The Ocean Band is a two-piece rubber strap with a highly flexible horizontal tube structure that is made for swimming, diving, and water sports. Lastly, the Trail Loop is a lightweight and flexible velcro-style strap that is built for running and endurance activities. Just like all straps and bands for the Apple Watch, the three options can be easily swapped out without the use of any tools, enabling you to customize your Apple Watch Ultra to suit the specific activity or environment that you plan on conquering that day. 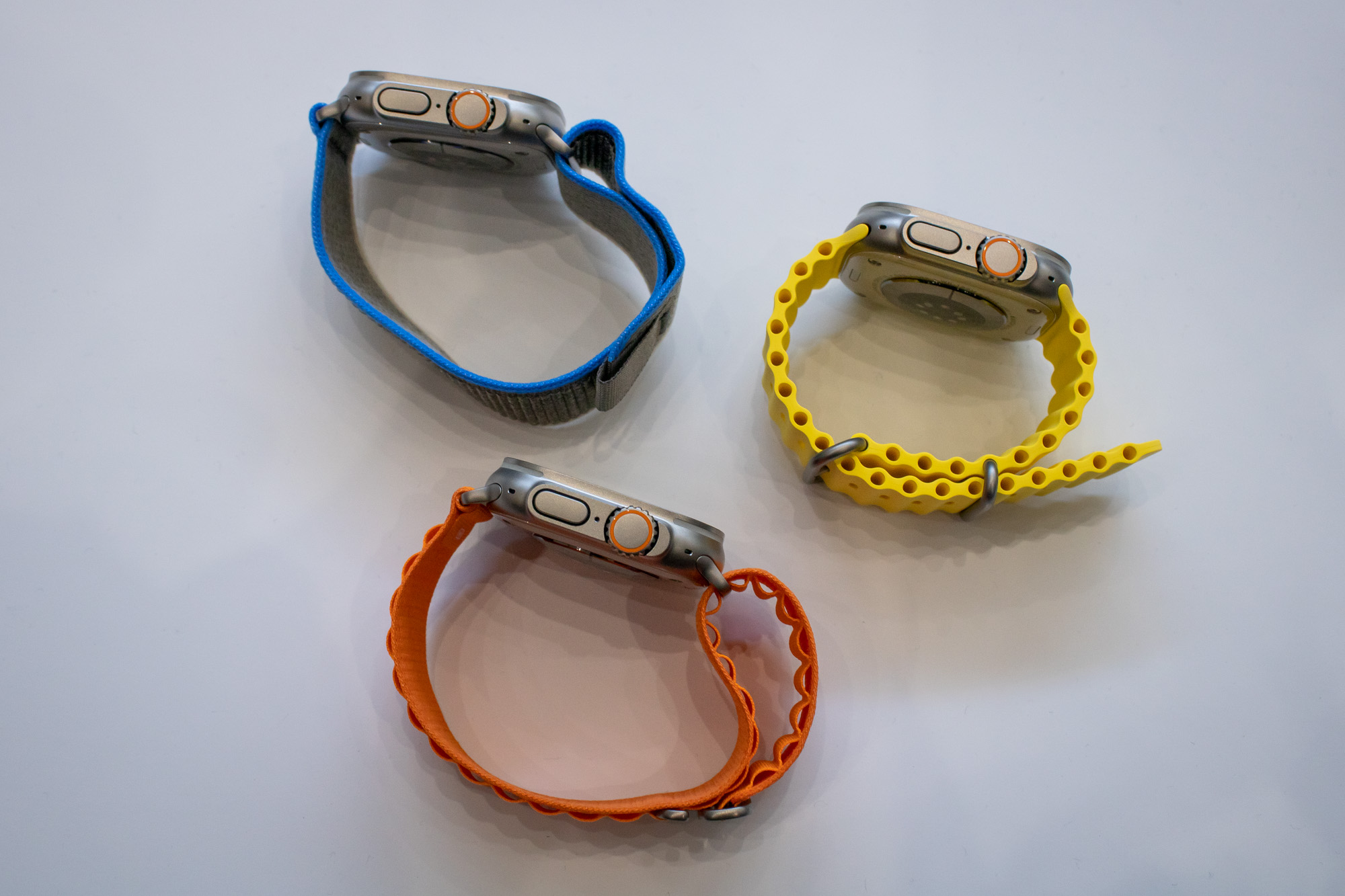 After getting the chance to try out all three of the different strap options, I have a hard time picking a flat-out favorite. The flexible structure of the Trail Loop band paired with its infinitely adjustable design makes it the most lightweight and comfortable among the three offerings, but the slightly more substantial and rigid structure of the Alpine Loop does a better job of supporting the large case of the watch on my moderate-size wrist. At the same time, there is something to be said for having a sports watch with a rubber strap that dries instantly and can easily be rinsed off whenever it gets dirty, and the Ocean Band is the only non-fabric option that is currently available. Realistically speaking, all three of the different strap options offer something different, and I could easily see someone owning one of each and swapping among them for different activities. 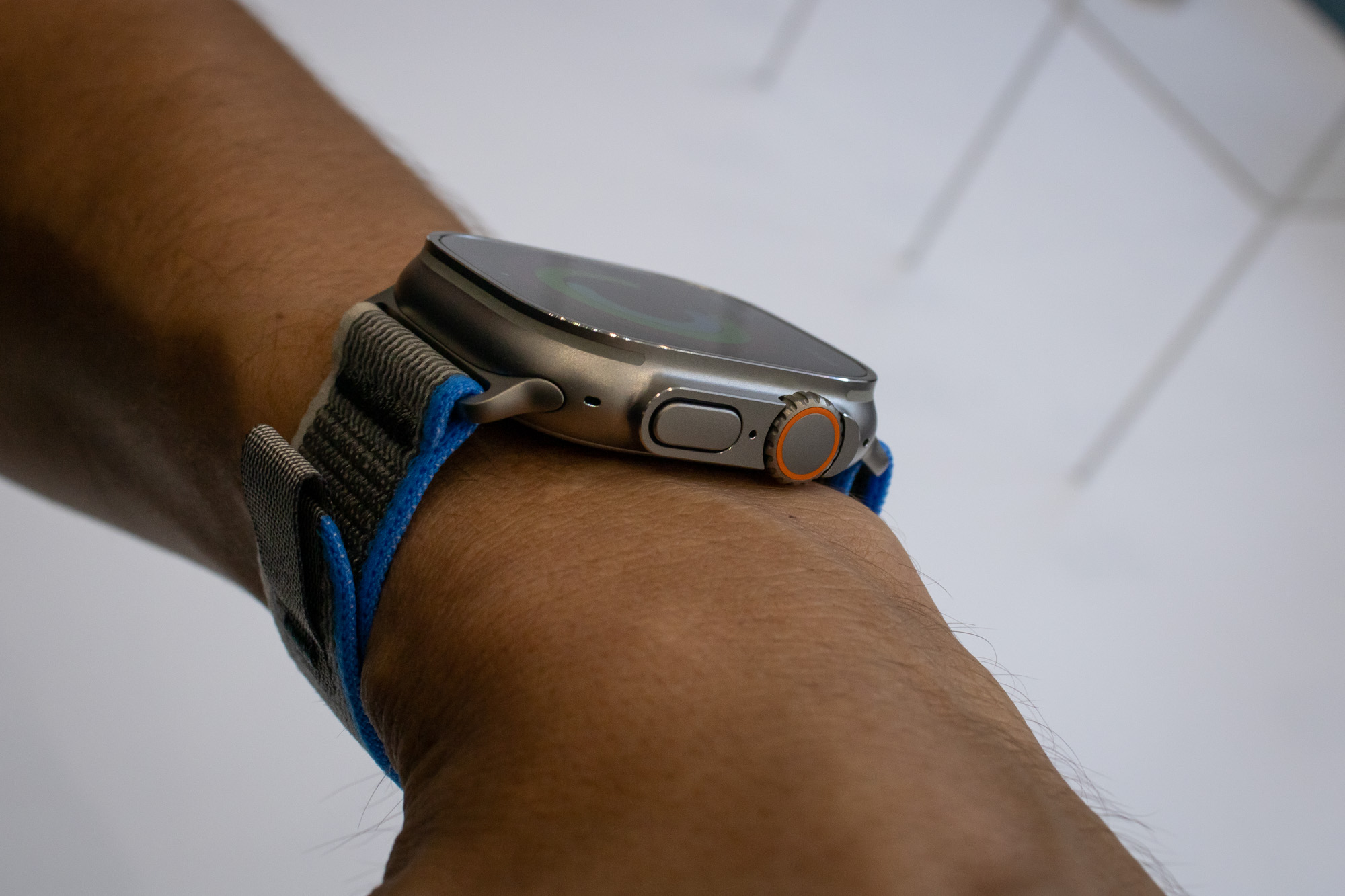 Traditionally, Apple has offered its watches as either GPS-only models or with the option of also having cellular connectivity. However, as the new top-of-the-line edition, the Apple Watch Ultra is exclusively offered in a cellular-equipped form, meaning that you can call and text directly from your wrist without having your phone with you. Additionally, this also means that you get maps, music streaming, Siri, and even Apple Pay, along with the ability to download additional third-party applications directly to your watch from the App Store. Similarly, while the standard Apple Watch Series 8 is offered in either 41mm or 45mm sizes, with aluminum or stainless steel cases, and in various colors including Midnight, Starlight, Gold, Graphite, Silver, Space Black, and (PRODUCT)RED, the Apple Watch Ultra is only available as a 49mm model with a titanium case that has bright orange accents. While additional colors and sizes may eventually join the lineup at some point in the future, the matte titanium case with high-contrast “international orange” highlights offers a rather utilitarian overall aesthetic that is perfectly in line with the purpose-built nature of Apple’s most rugged watch. 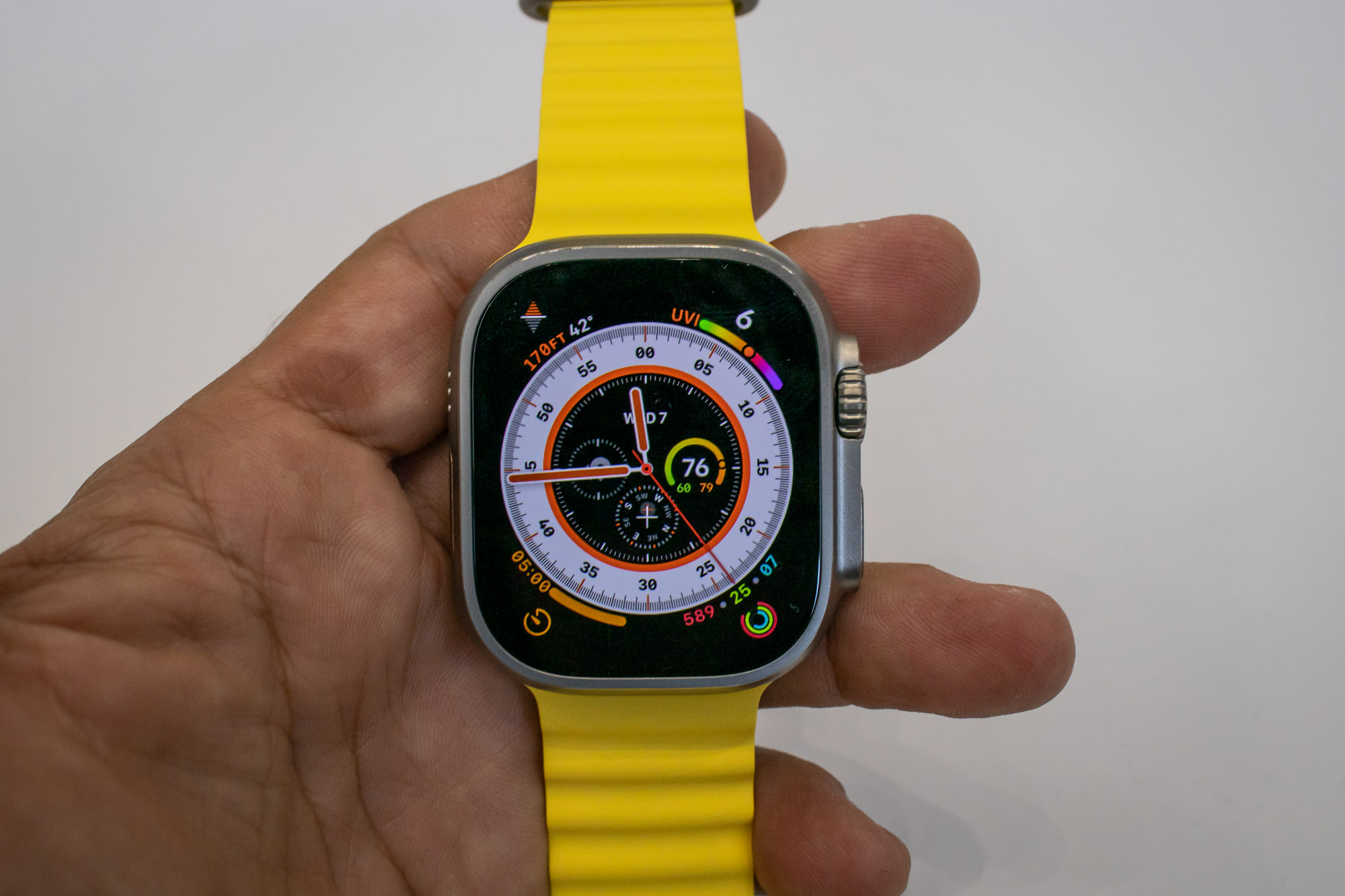 Connected devices make ideal sports watches due to the incredible range of functionality that they offer, and while the Apple Watch has always been popular as a fitness tracker and everyday sports watch, it often played second fiddle to more durable and purpose-built offerings from brand’s like Suunto and Garmin when it came to the category of rugged timepieces built for the outdoors. Until now, an Apple Watch wasn’t capable of accompanying you scuba diving or even lasting the duration of an overnight camping trip without likely needing to be charged. However, that has changed with the launch of the Apple Watch Ultra, which pairs the brand’s versatile and highly intuitive interface with an extra durable case and built-in suite of advanced sports watch features. With an official retail price of $799 USD (at the time of launch), the Apple Watch Ultra costs twice as much as the base price for the new Series 8 models, yet this is still well within the realm of what gets classified as “affordable” by the greater watch enthusiast community. While there will certainly be some people who purchase the Apple Watch Ultra specifically for its adventure-ready capabilities or so that it can serve double duty as their dive computer, I imagine that there will also be plenty of people who buy the new model simply because they appreciate its larger size, rugged construction, and more advanced specs — similar to how many people wear dive watches, despite having no intention of ever going scuba diving. For more information, please visit the brand’s website.