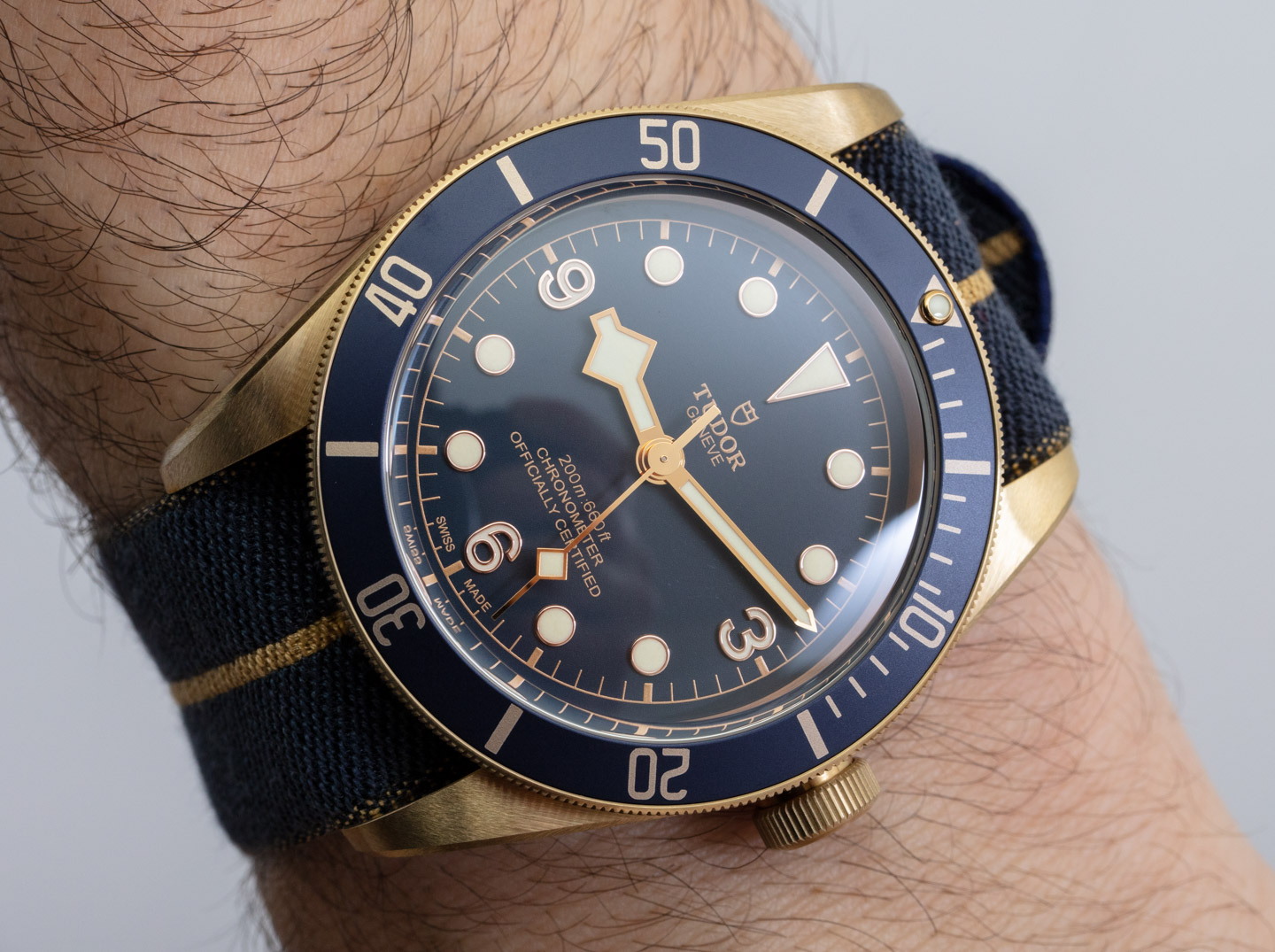 It was back in 2016 that Swiss Tudor first released the Black Bay Bronze watch (aBlogtoWatch hands-on here). This was not only the first bronze-cased watch from Tudor but also a larger-sized Black Bay model (which now comes in a series of sizes) at 43mm-wide. Tudor has since released a small assortment of Black Bay Bronze watches, mainly for special retailers. That includes the pictured Tudor Black Bay Bronze Bucherer Blue reference M79250BB-0001 that you see here.

The watch is part of the larger “Bucherer Blue” family of watches, produced by various important luxury brands to be sold exclusively through the Bucherer authorized watch dealers. There are a number of “Bucherer Blue” models that adopt a royal blue color palette to a number of popular high-end timepiece collections. Bucherer stores are mainly in Europe, but the Lucerne-based company (which also owns the watch brand Carl F. Bucherer) has since branched out. A few years ago, Bucherer acquired the formerly American Tourneau family of watch stores. The stores are slowly being modified, and at least some of them will eventually be rebranded as Bucherer shops, from what I can tell. More important for watch lovers is that at least some Bucherer Blue edition watches are now available at Tourneau stores, including this Tudor Black Bay Bronze Bucherer Blue timepiece (first covered in 2017 on aBlogtoWatch here). 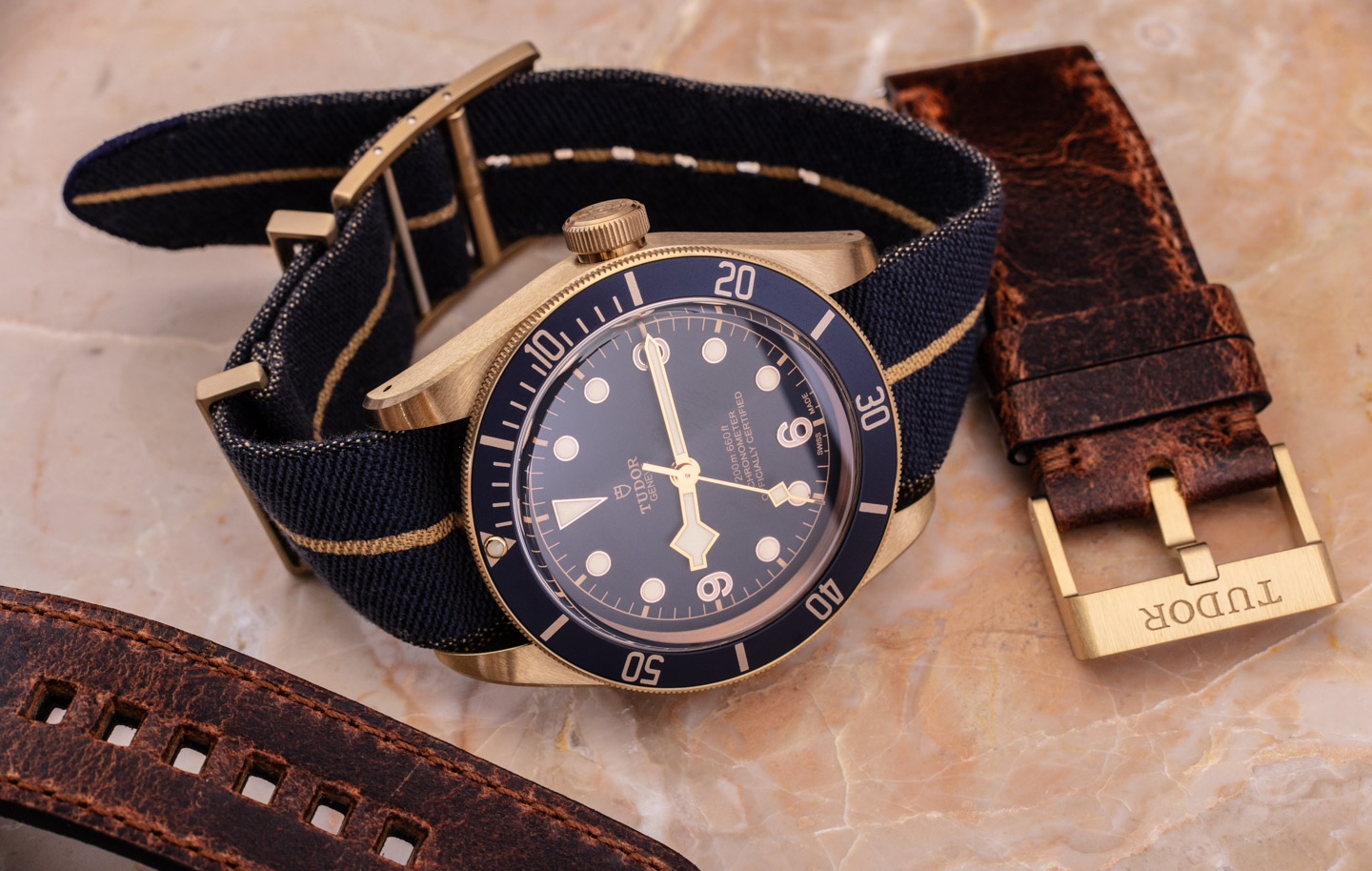 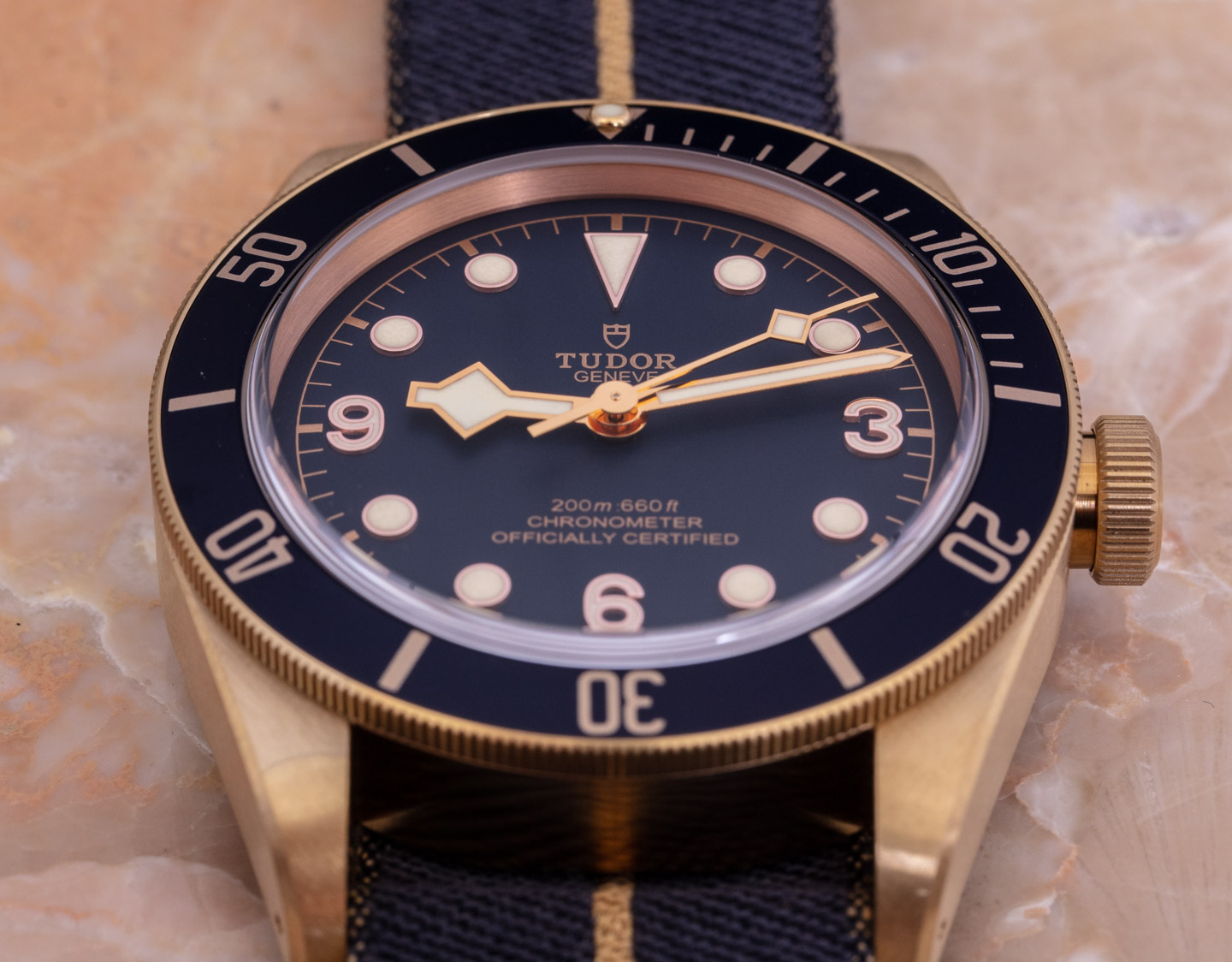 The differences between the Bucherer Blue and other versions of the Black Bay Bronze are mostly related to the blue color tone for the dial and fabric strap. There are also “Bucherer 1888” markings etched into the watch’s caseback. Even though the Black Bay Bronze isn’t a brand-new model, it holds up extremely well and continues to be a stand-out Tudor watch for a lot of enthusiasts who might not find something else for them in the Black Bay collection.

Tudor produces some of the most beautiful tool watches today. The brand’s trick is to combine ultra-modern construction with lovingly refined designs that evoke an authentic retro sports watch vibe. At 43mm-wide, the Black Bay Bronze is 2mm larger than the next largest Black Bay, which is 41mm-wide. The relatively thick (but comfortable) case has 200 meters of water resistance and a vintage-esque box-style sapphire crystal. The dial is entirely symmetrical with no date window to take away from its purist form. One of the most interesting dial details, in my opinion, is how the applied hour markers are actually in a rose-gold tone, while the hands are in a more yellow-gold tone (which better matches the case color). This offers an interesting depth effect and isn’t something I think most designers would assume (two similar but different gold tones) could work well (but it does). 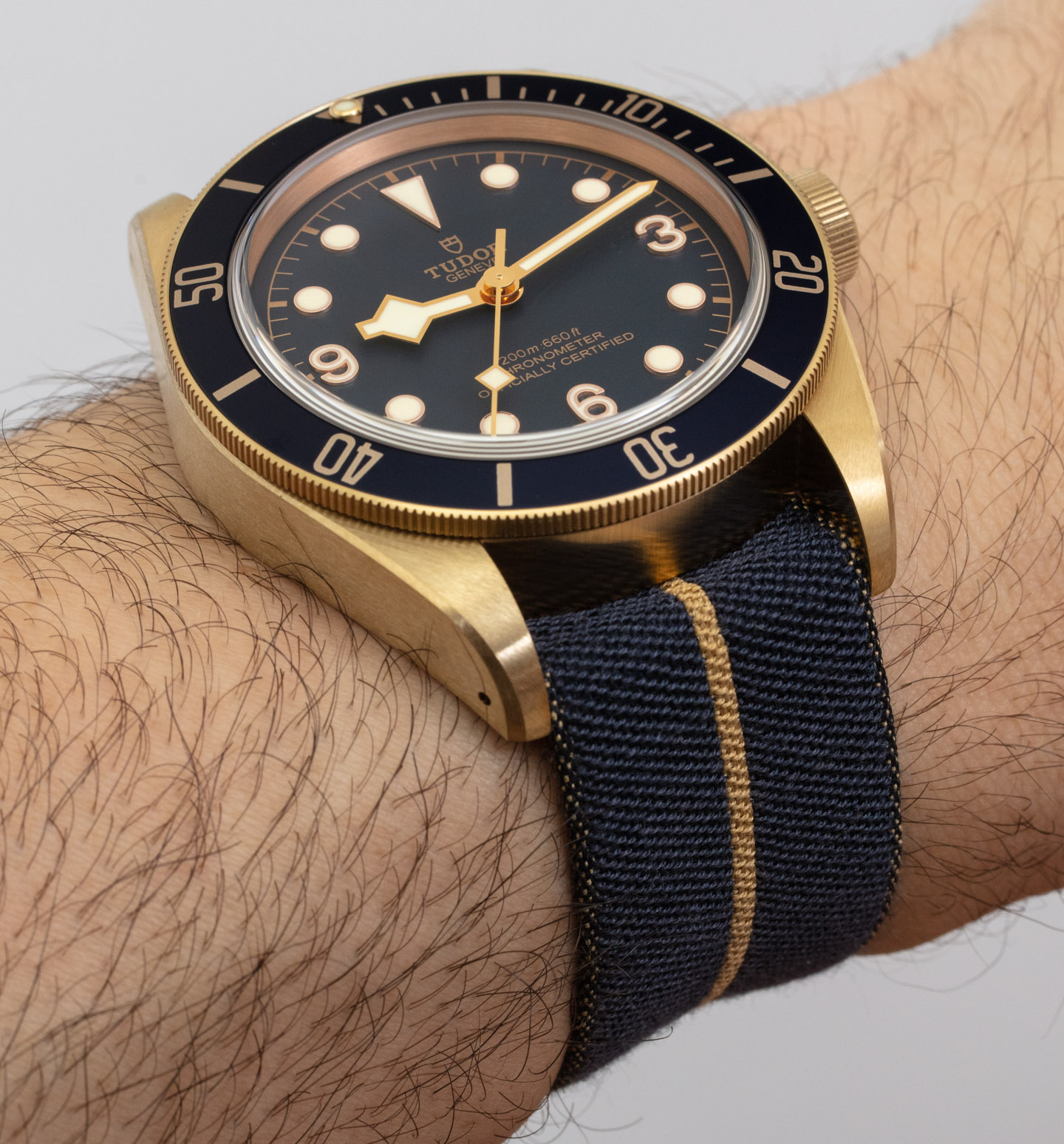 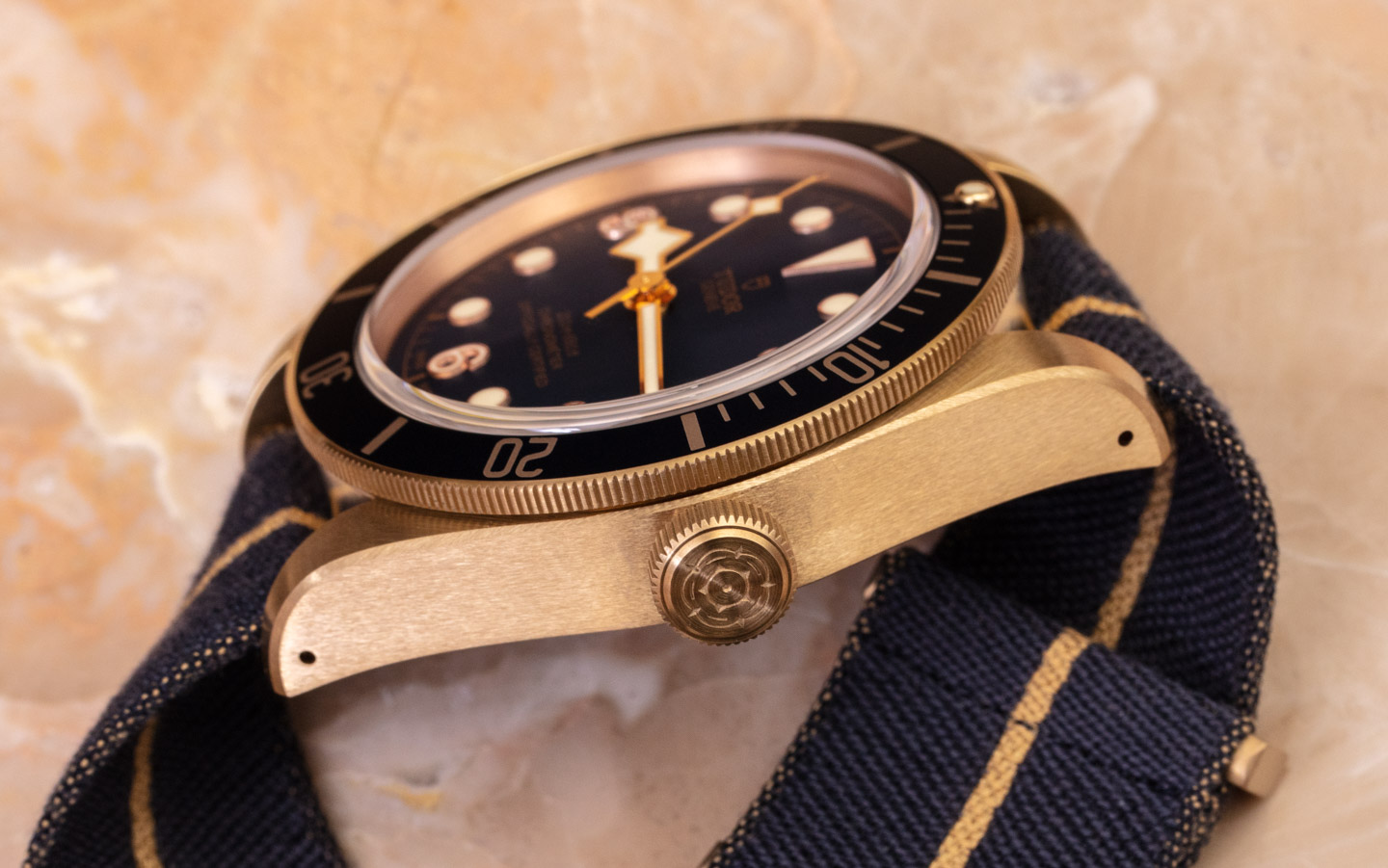 Bronze is a material that I like in small doses, but I do think it has become a bit too trendy over the last few years. That said, there are certainly watches that make sense in bronze, and others that seem to have bronze cases “just because.” Bronze, as a material, has zero benefits over steel (which is a far superior alloy from a utilitarian standpoint), but it does have a nice warm color to it. Think of bronze as a “poor man’s gold” — certainly more satisfying than steel, which is colored to look like something else.

Tudor has one of the best bronze cases on the market, in my opinion. This is due to two factors. First is the use of a “stable” bronze-aluminum alloy. This means that, unlike many bronze watches out there, the Black Bay Bronze’s case will not discolor unevenly (more even discoloration as opposed to blotching). While there are some watches that look cool as bronze ages and “patinas,” and greens… I think most people prefer the look of bronze without blotchy discoloration. For those people, the Tudor Black Bay Bronze is perfect. 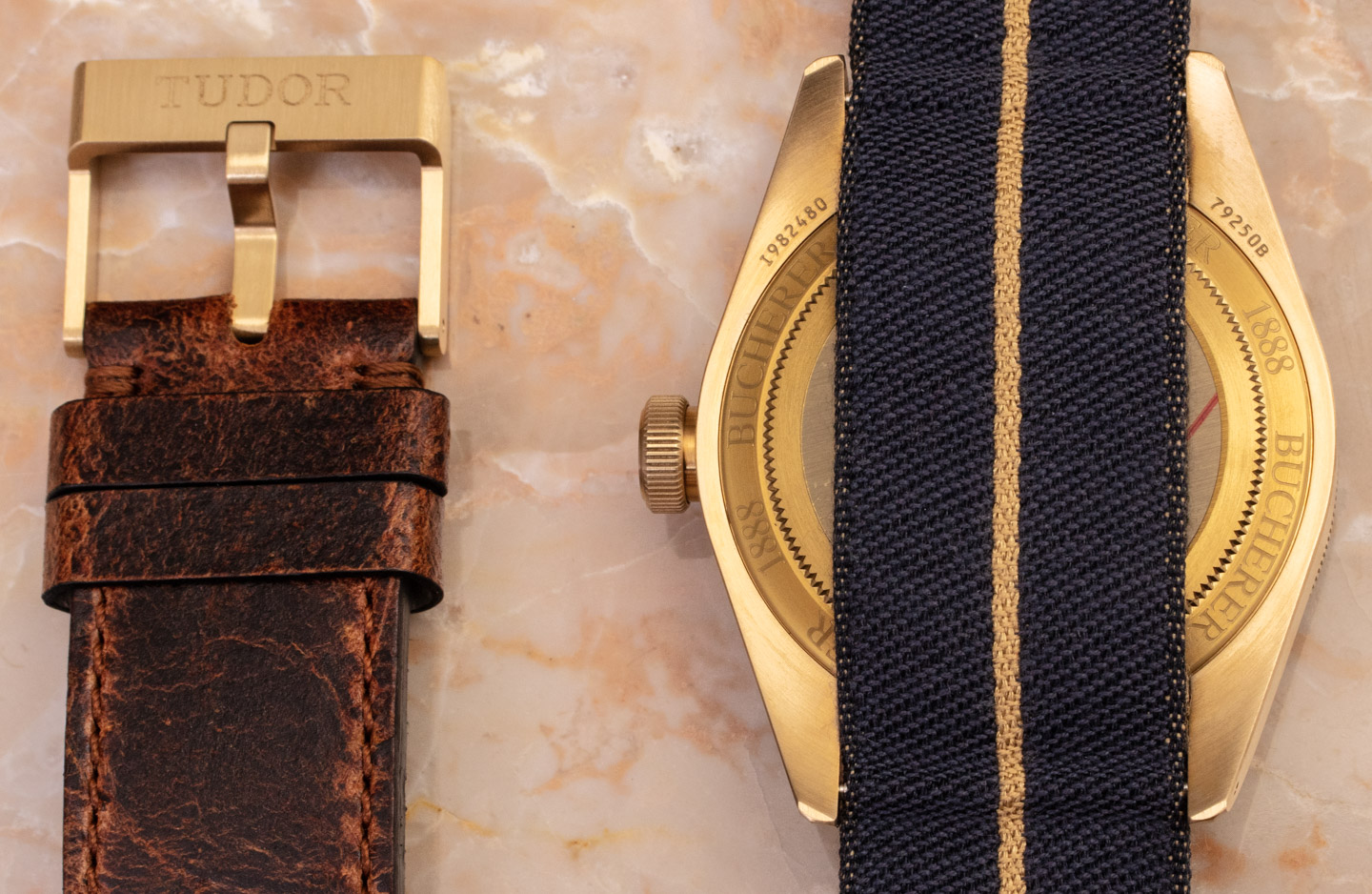 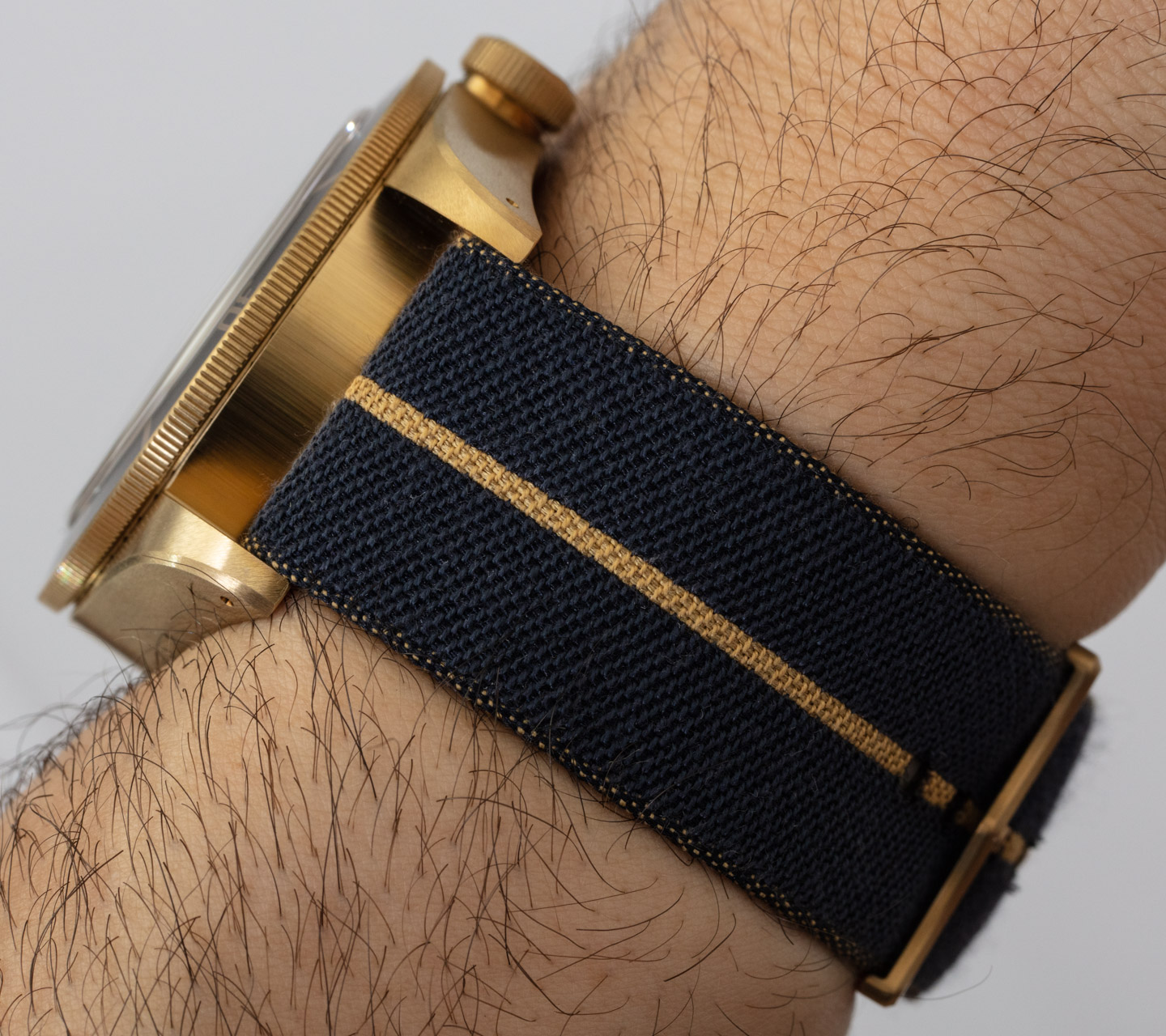 The second reason I like Tudor’s bronze case is just how nicely it is machined and finished. Tudor is part of the Rolex brand family, so it gets a lot of shared access to know-how and production equipment. The polishing, brushing, and edging on the cases is top-notch. I’ve never quite seen a bronze case that’s been more precisely polished and cut. While steel or even ceramic would be a great choice for a 43mm-wide Black Bay, bronze just works, as it helps this watch distinguish itself from Tudor’s many other Black Bay models (even if the dial design and case size are a bit different, too).

Around the dial is a uni-directional rotating diver’s style bezel that operates with 60 satisfying (but not too loud) clicks. Over the bezel is an aluminum insert. Inside the watch is the in-house-made Tudor caliber MT5601 automatic, which operates at 4Hz with about 70 hours of power reserve. The movement is also COSC Chronometer-certified. 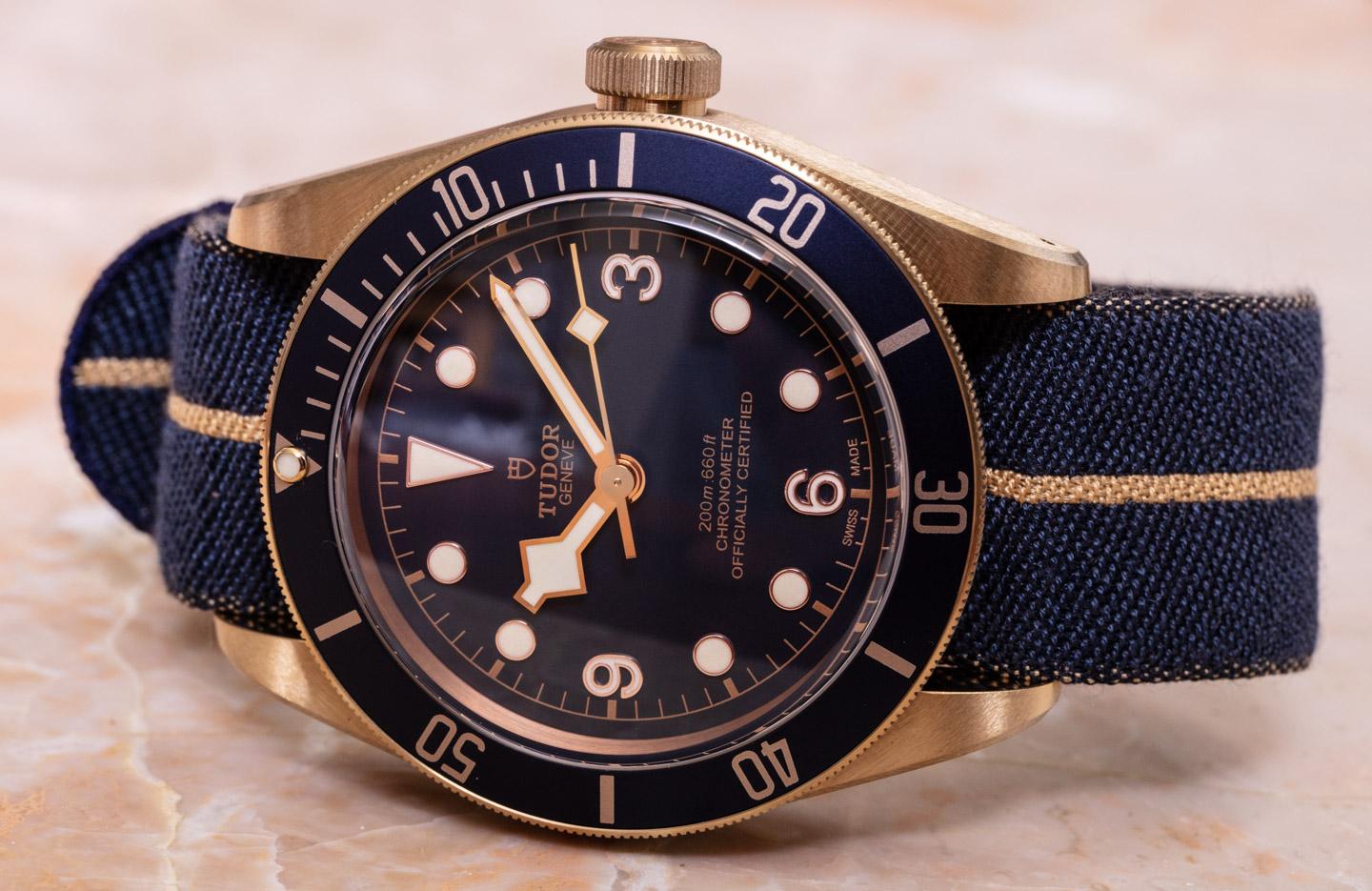 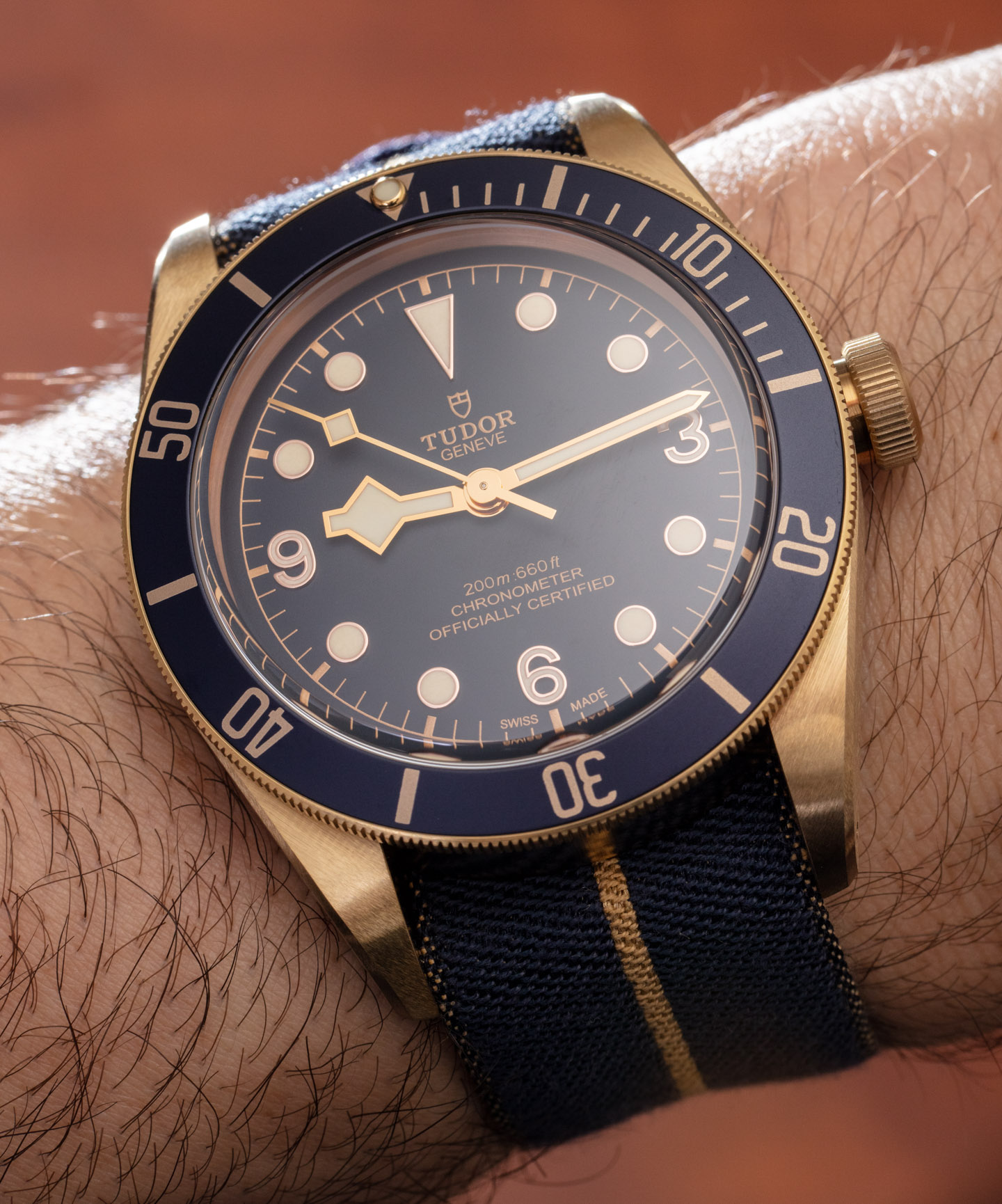 Attached to the watch is an included blue fabric strap as well as a vintage-style (aged look) warm brown leather strap. Exposed holes in the lugs allow for relatively quick strap changes (with a tool), allowing you to switch between straps. The blue fabric strap is very comfortable (though thin), and it fits “NATO-style” under the watch as one piece. Unlike most NATO-style straps, the strap on the Black Bay Bronze is not too long — which means you don’t need to “tuck the strap” (a good thing).

The more I get to know the Tudor Black Bay Bronze, the more I grow to like it. Its size and playfulness separate it somewhat from other Tudor watches that I find tend to be a bit more serious. What I really see as the value of the Black Bay Bronze is a sort of more accessible Panerai-style watch, but with as much technical cred as more expensive Panerai watches. An equivalent Panerai watch with a bronze case is several times more money, but it’s not necessarily several times more watch. The Black Bay Bronze is also an excellent choice for anyone who is curious about the color and wearing experience of bronze but who doesn’t want a watch that will blacken or turn green over time.