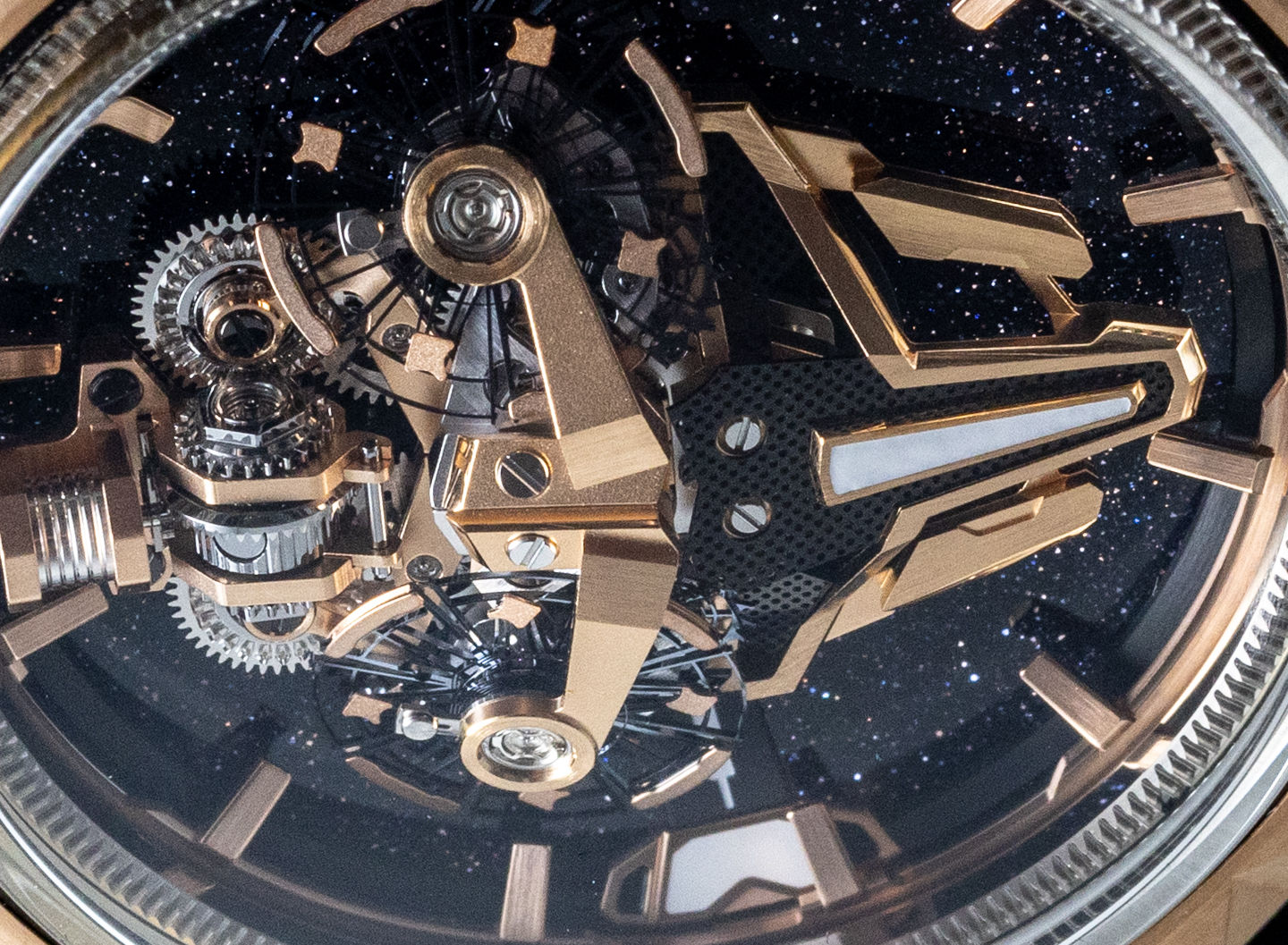 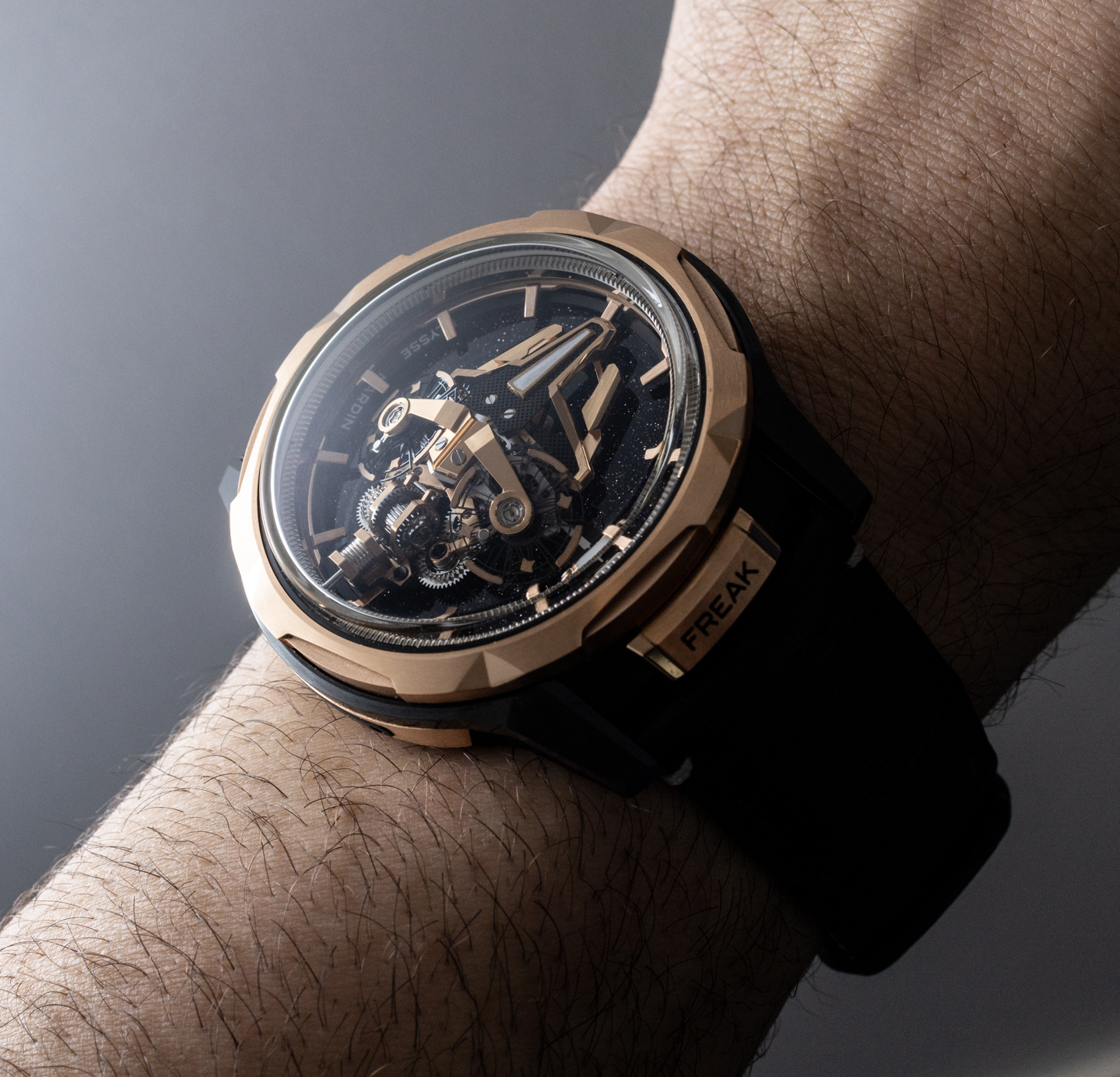 One of the watches I was most excited about seeing at Watches & Wonders Geneva 2022 was the latest high-end Freak watch by Swiss Ulysse Nardin. Known as the Ulysse Nardin Freak S (debuted on aBlogtoWatch here), this latest installment in the “Freak watch saga” that started in 2001 is a visual testament to the enduring power of this mixed visual/technical concept. The Freak watch family began as a playground for silicon parts in mechanical watch movements. Ulysse Nardin shocked the industry by replacing metal parts with those produced from silicon. It started not only a major debate about new materials in the traditional watch industry but also heralded an era in which silicon is one of the most important materials in contemporary horology. Ulysse Nardin was correct despite the many naysayers who felt silicon had no place in high-end watchmaking.

Now, 21 years later, the purpose of the Freak watch collection has evolved. Having undergone several ownership and leadership changes since the original Freak watch was debuted, the Freak collection is now its own pillar within the Ulysse Nardin brand. Less about technical performance innovation and more about design and visual presentation, the Freak collection today celebrates Ulysse Nardin’s status as a materials innovator while providing fun and excitement on the wrist for those who can afford it. 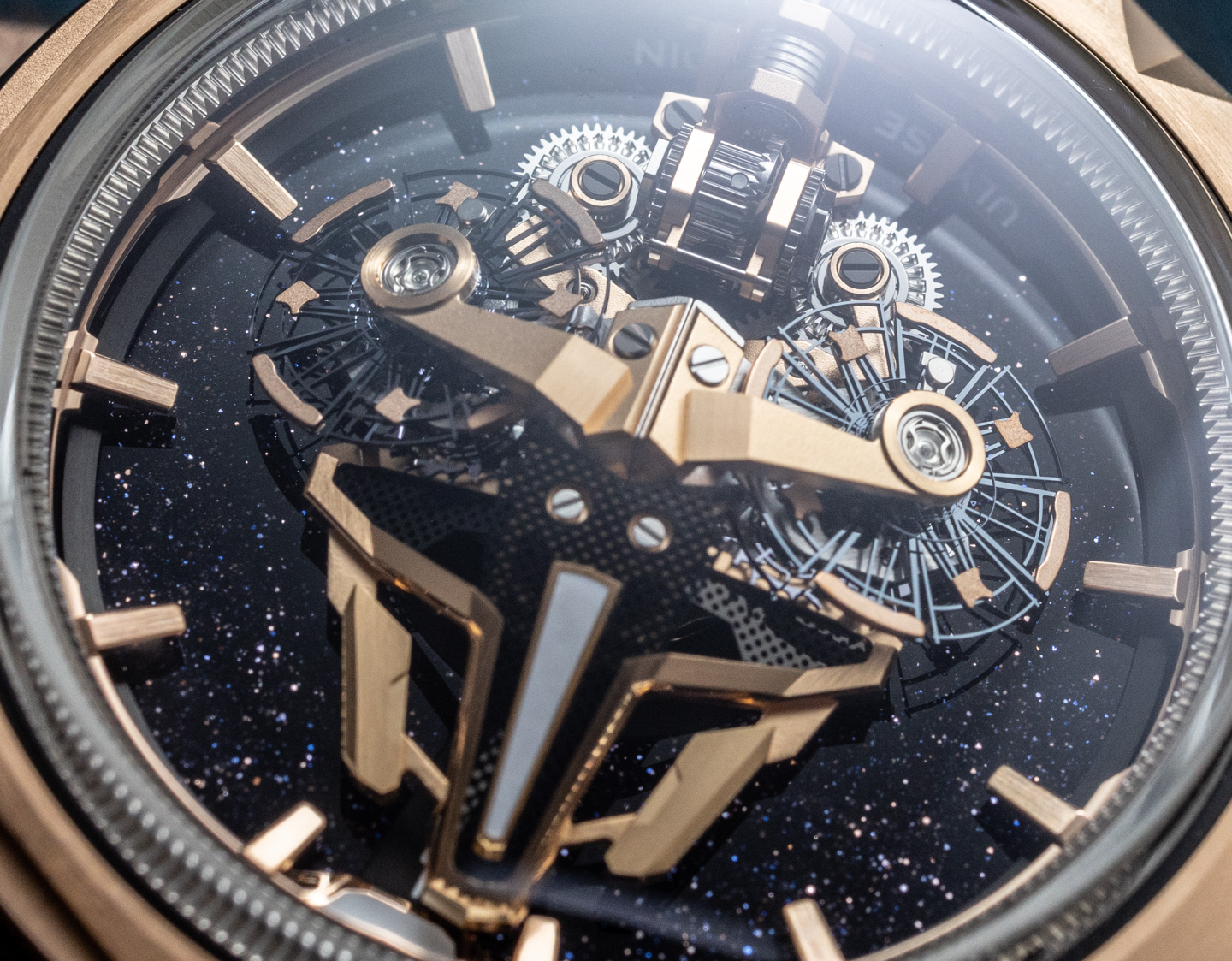 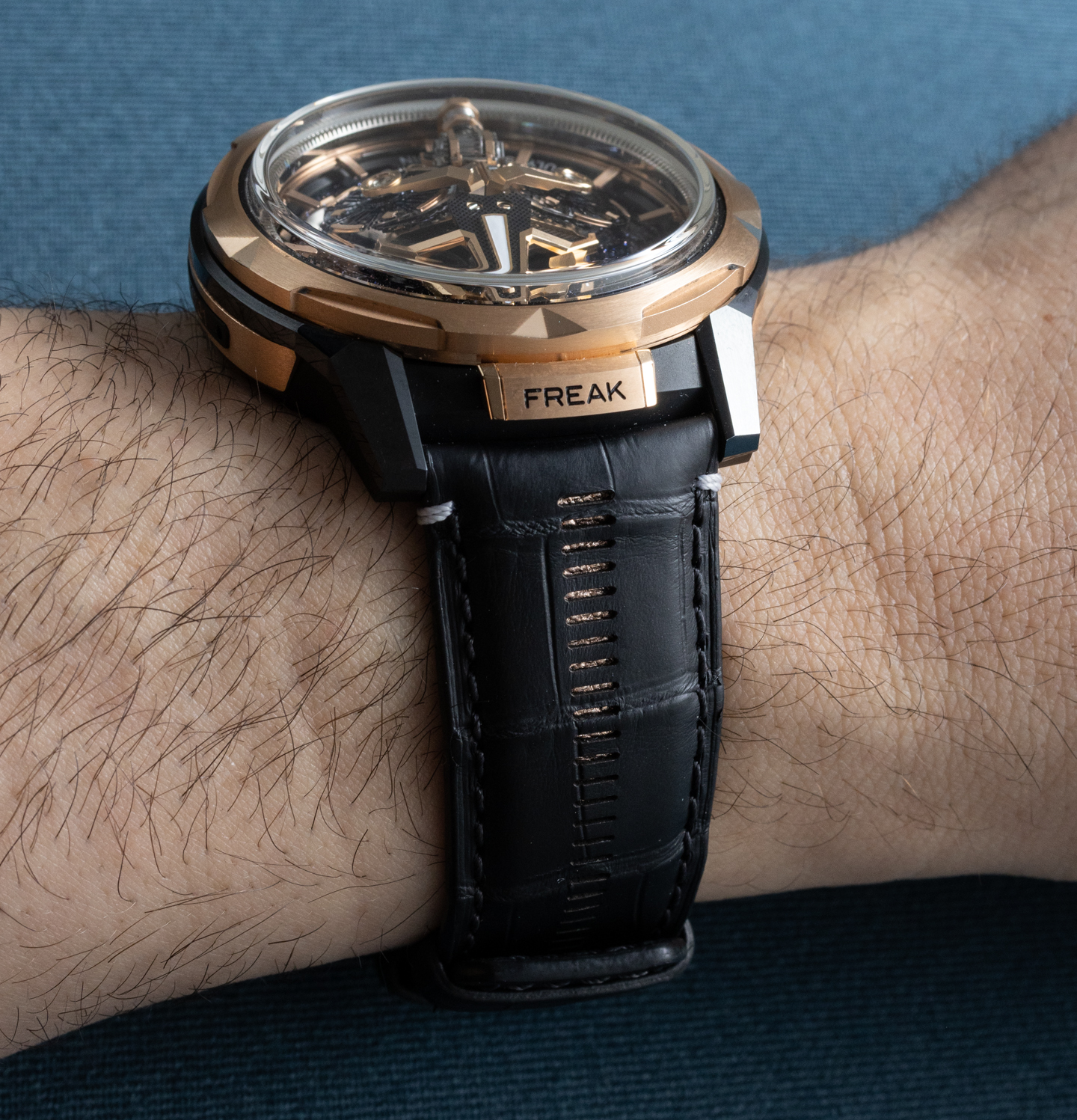 My excitement about the Freak S watch proved well-founded. The minute I ran into Ulysse Nardin CEO Mr. Patrick Pruniaux at Watches & Wonders Geneva, I noticed he was wearing the Freak S. He didn’t take it off for the entirely of the show, and he wore it really well, smiling the entire time. “What a cool watch” I thought. No, it wasn’t just that Patrick made for a good wristwatch model but rather that the entire futuristic design and visual animation of the Freak S timepiece is fun and inspired. And I couldn’t be happier about its forward-looking design. What do I mean by this? Well, a few years ago, the futuristic watch wasn’t having a particularly good time. People were clamoring for historic and vintage (i.e., “classic”) designs, and it was popular for consumers to joke about the novelty and experimentation of contemporary watches that tried new things. We were in an era of staunch neo-classicism when nostalgia for the past seemed to overshadow people’s typical interest in innovation. Try as I might, I could barely get people excited about futuristic watch designs. I actually dedicated an entire article to this in 2020 when I opined about how the social mood had a direct effect on whether or not people wanted classic or futuristic watch designs.

Now, just two years later as the world finds itself in a very different place, the social mood appears to be changing. People are again hopeful about the future and curious (as opposed to dreadful) of what it might bring. At least that’s the sentiment I get when I notice the renewed interest in modern and futuristic watch designs. The Ulysse Nardin Freak S is a great example. The brand doesn’t hide the fact that the minute hand on the dial (which, like all Freak watches, includes the running train and regulation system of the watch) is meant to look like a spaceship, and the entire composition of the watch is about how we humans optimistically gaze into the sky with wonder and hope. The case design is modern, and the entire approach to watchmaking is forward-thinking and contemporary. Just a few years ago, this concept would not have been nearly as well-received. I’ve personally never let go of my strong interest in modern wristwatch design, so I’m really happy to see the re-emergence of this type of design concept, even if I think we are about 24 months away from no one wanting to see as many spaceship dials. 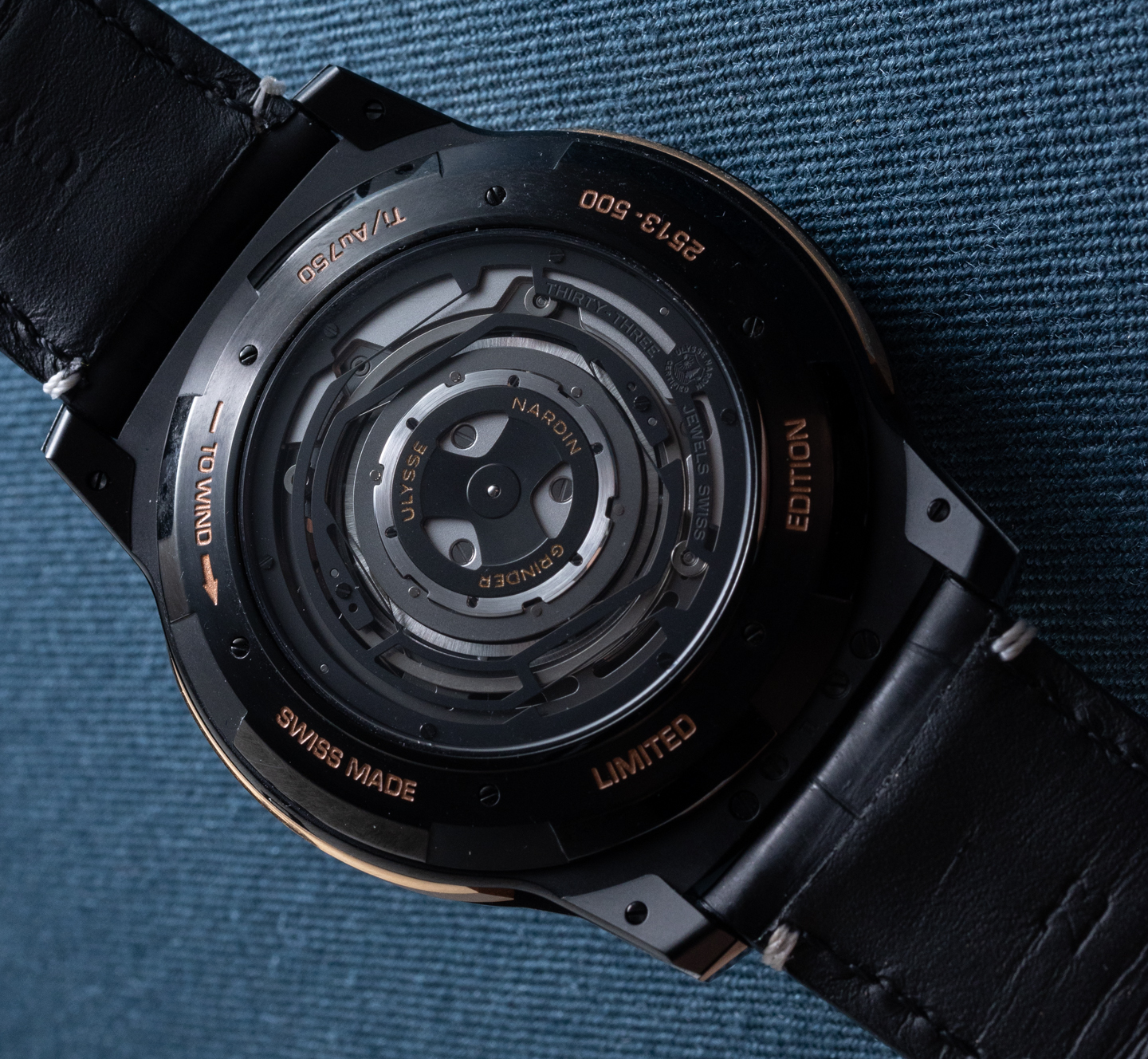 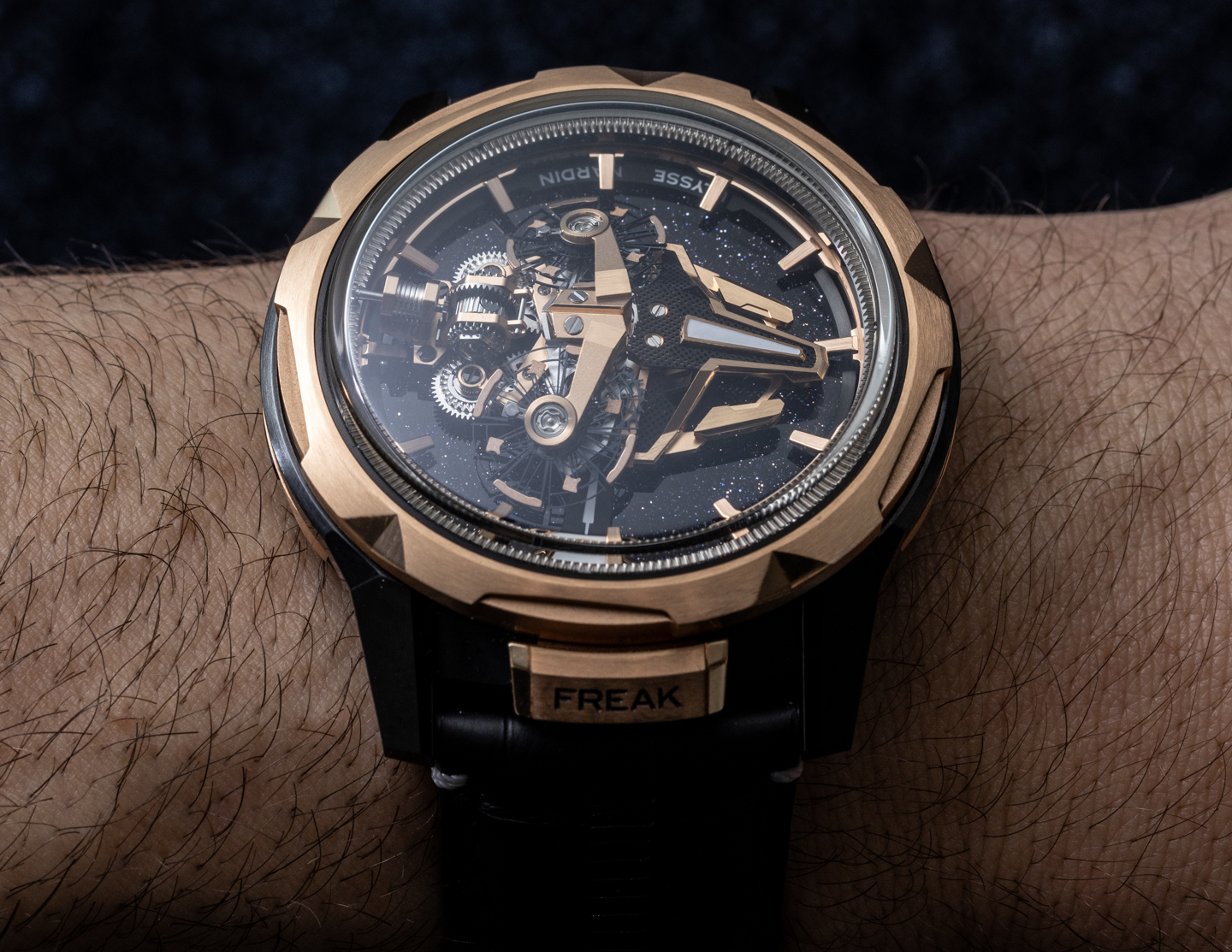 In the article above, I discuss more about the technical nature of the Freak S watch and its novel dual silicon balance system that uses a new vertical differential system. The idea is that the movement has two time regulation systems, as opposed to one, but that their performances are averaged out in order to further reduce rate errors. The ultimate goal of such dual balance regulation system is more accuracy over time. That’s nice, but Ulysse Nardin doesn’t actually claim too many performance advantages over a single balance wheel system. That doesn’t mean the Freak S doesn’t perform well, but rather that the appeal of this watch is in the exercise of technique over the sheer timekeeping performance. The goal of this special movement system is visual animation and emotion. While the system is designed for increased accuracy, it isn’t clear what the actual performance is. Rather, the appeal of the watch is in the animated view of the dial with its dual oscillating balance wheels and otherwise stunning display.

Technically, this system is very cool, and the combination of the Freak architecture plus the new differential and dual balance wheel system is, indeed, awesome to behold. The “vertical” nature of the differential system is really in how it is oriented and visually displayed and not related to any performance consideration, as far as I can tell. The two silicon-based balance wheels and balance springs are coated with diamond material. This is what “DiamonSil” is, and it adds strength to silicon, which is otherwise rather brittle. The dial itself has the large minute hand structure as well as a less obvious hour hand on the periphery of the spacey deep blue aventurine dial. I’d love for Ulysse Nardin to figure out a way of incorporating a “Freaky” seconds indicator into the mix, at some point in the future. 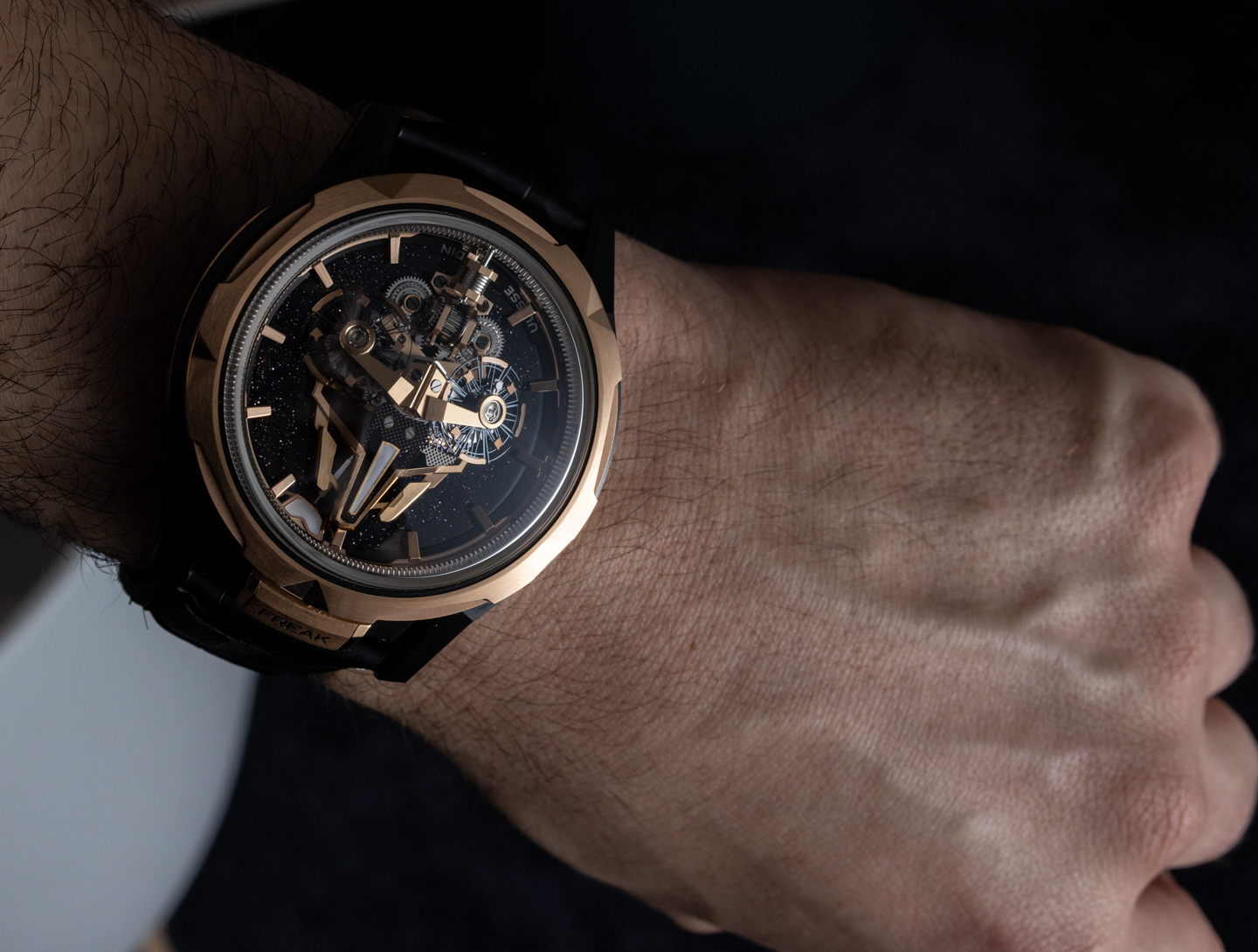 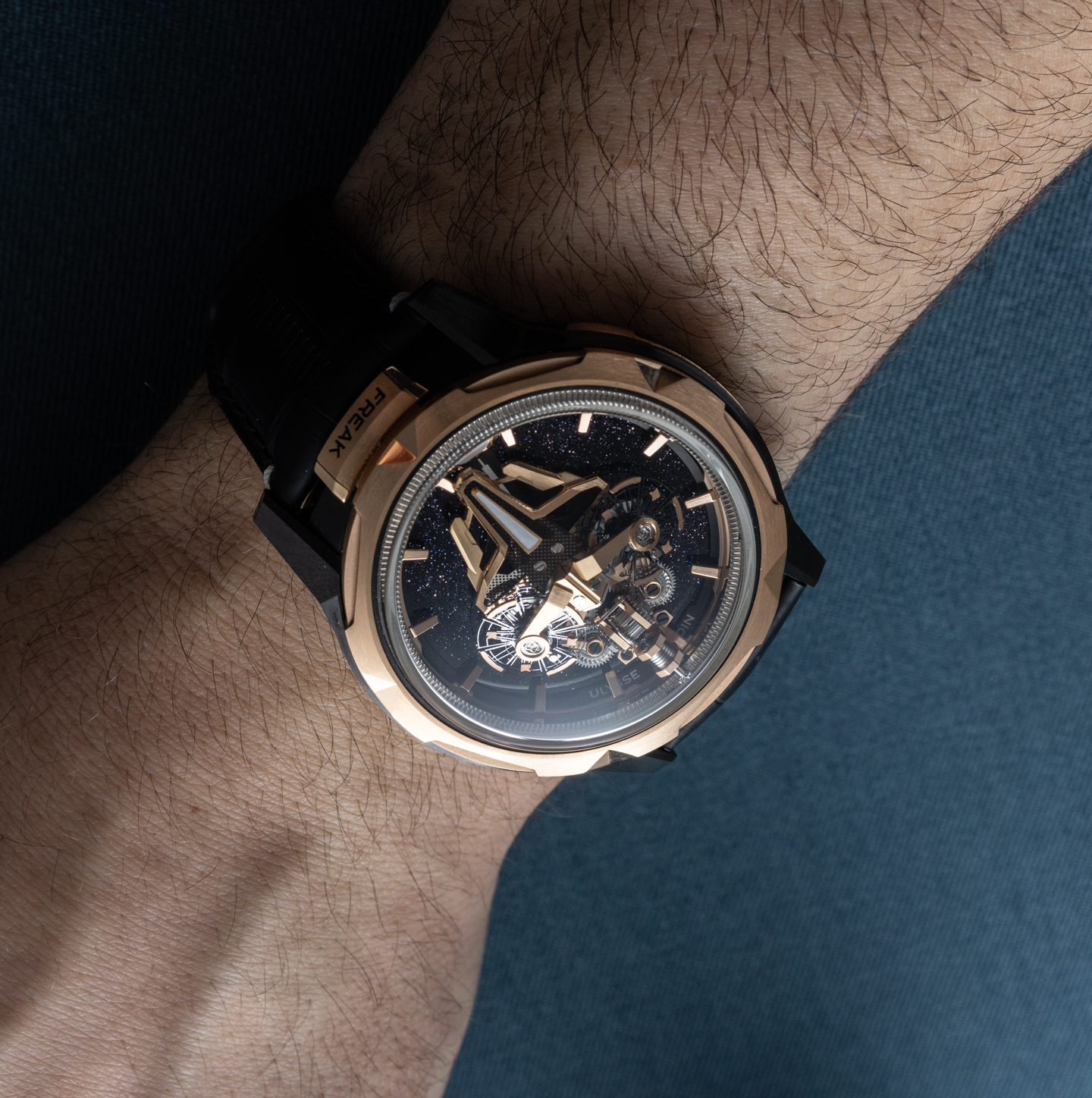 The movement inside the Freak S is the in-house caliber UN-251 automatic. Each of the two balance systems operates at a frequency of 2.5Hz (the slower speed makes the more elegant to look at), and the overall watch has a power reserve of 72 hours. Recall that Freak watches normally (outside of the Freak X models) have no crown. Time is adjusted by turning the top bezel (which is unlocked after you lift the small tab located at the 6 o’clock hour market position). If you want to manually wind the mainspring, you turn the caseback crown. That said, the Freak S is the second Ulysse Nardin Freak watch to feature automatic winding. It does this with a system that the brand calls “Grinder.” It employs an interesting concept that eschews the traditional weighted rotor and replaces it with a system that is more sensitive to movement and thus offers more winding efficiency. People who like watches like this also tend not to like manually wound watches. So, the Freak S’s Grinder automatic winding system simply translates into a more convenient wearing experience.

The three dimensional mechanical sculpture, which is the watch dial, is housed in a slick-looking 45mm-wide case that is water-resistant to 30 meters. This reference 2513 500LE 2A BLACK 5N/1A version of the Freak S (the only one currently available) has a case that is produced from 18k rose gold and black DLC-coated titanium. It is fitted to a two-tone black alligator and calf-leather strap with gold-tone coming through the vertical line of horizontally cut perforations. 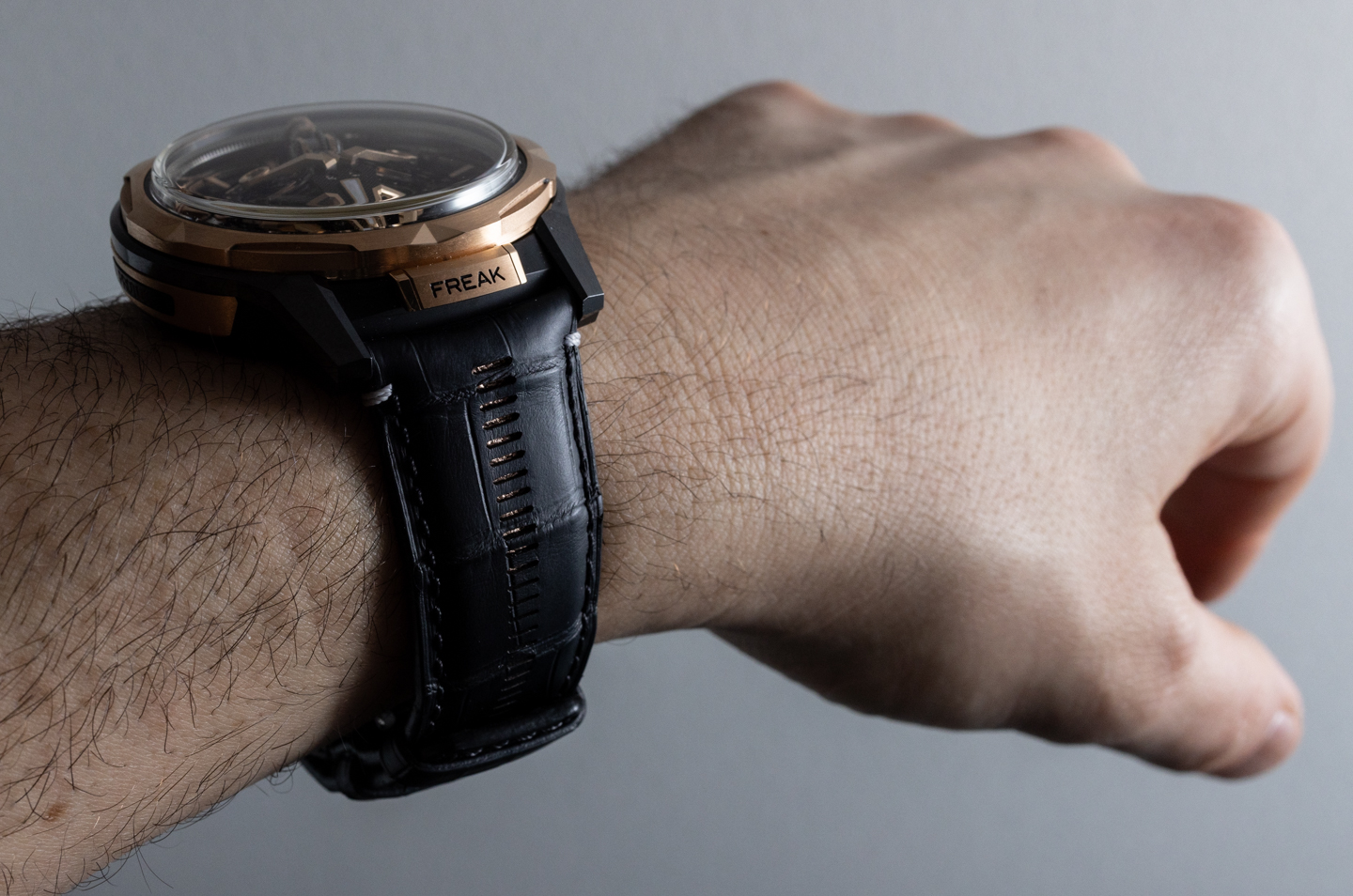 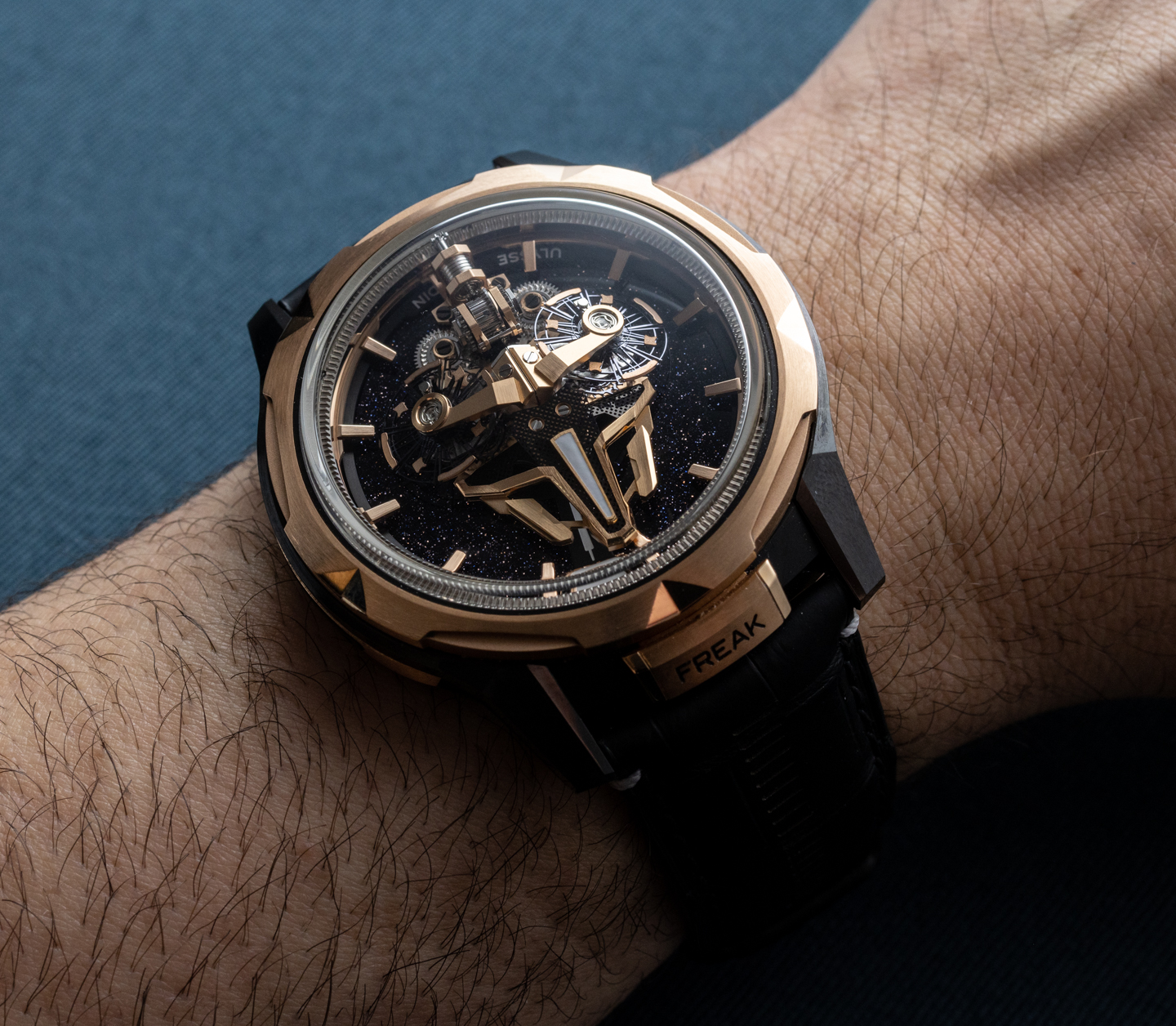