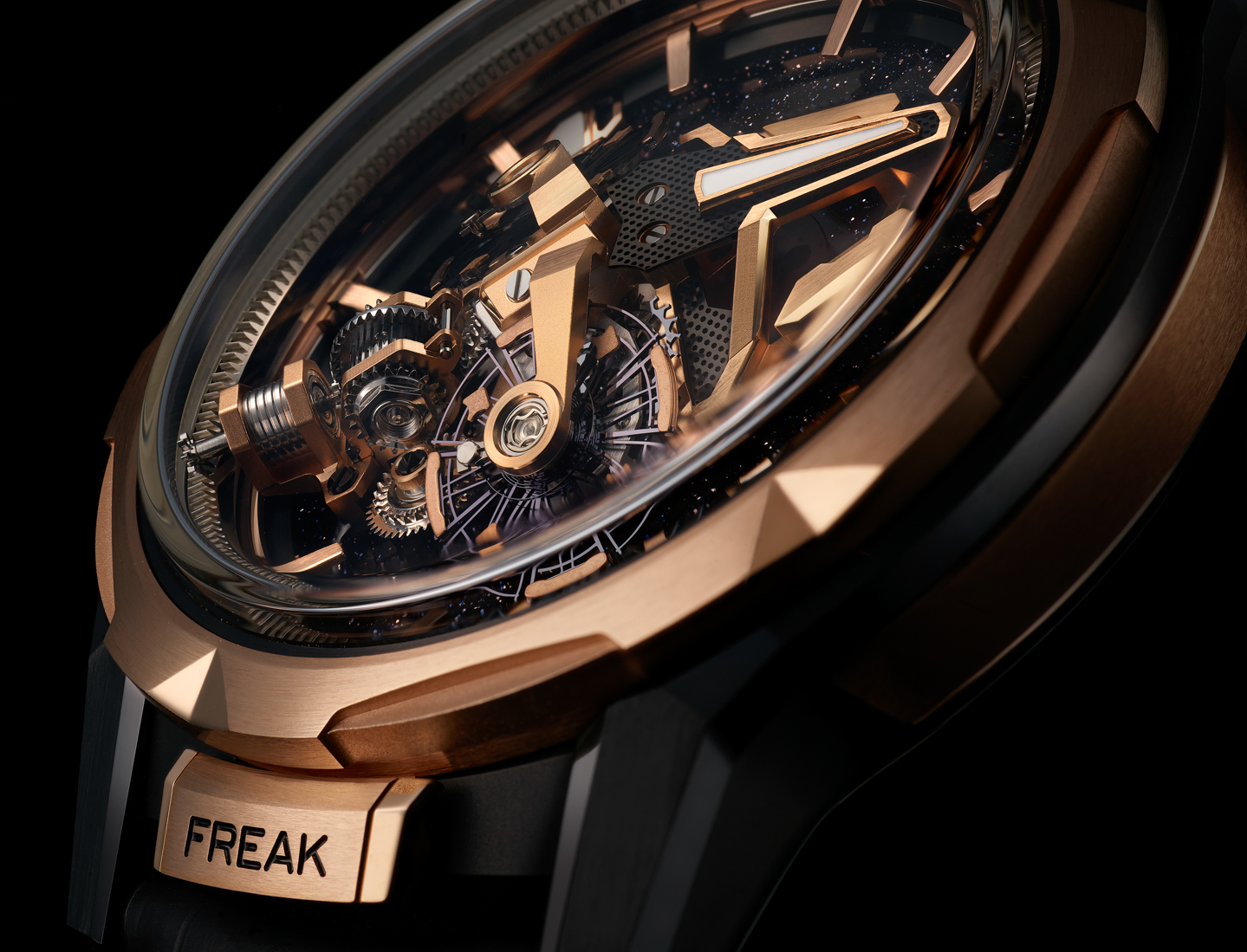 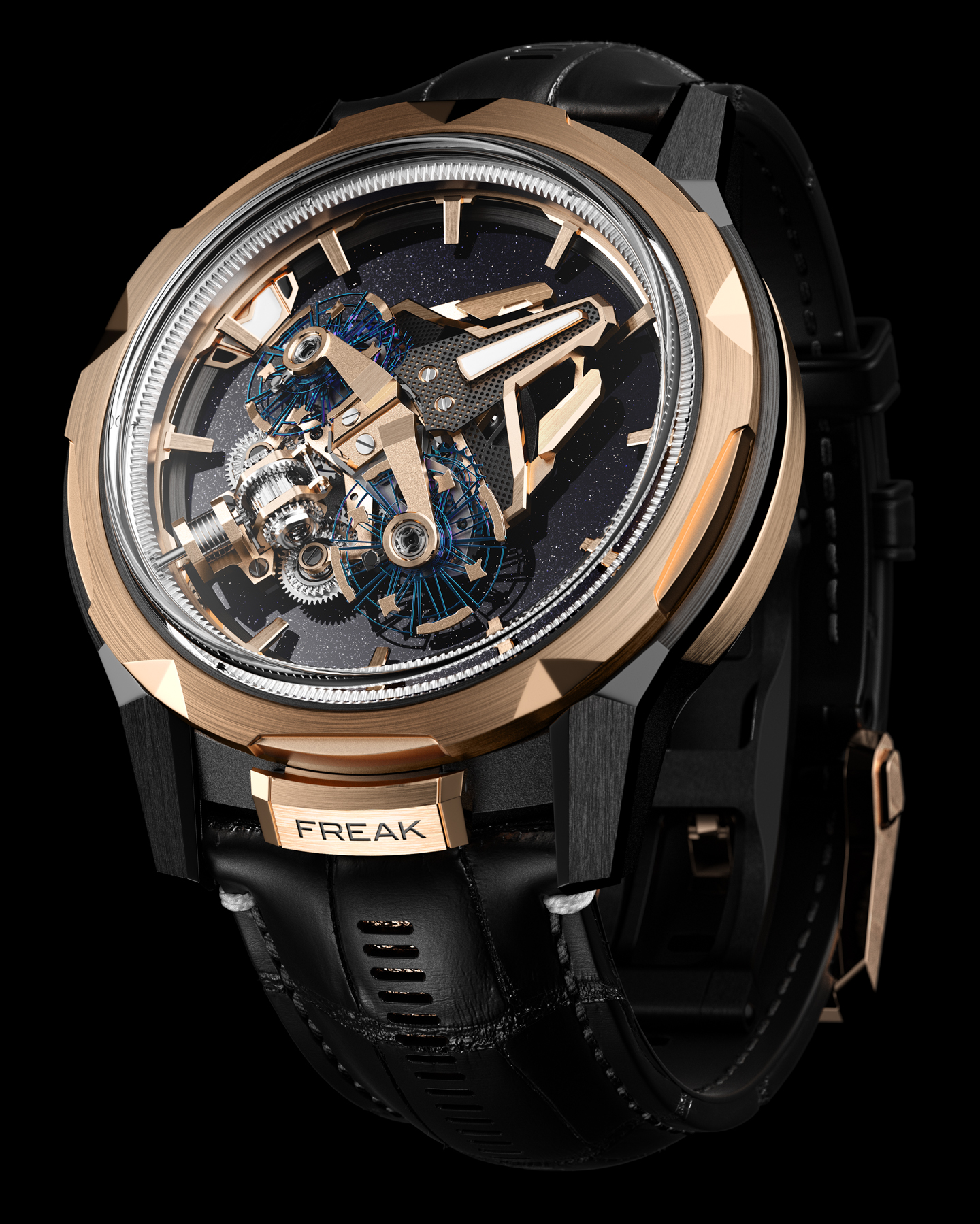 The famed Ulysse Nardin Freak collection receives a new high-tech member for 2022 with the beautiful Ulysse Nardin Freak S. The watch includes a new Freak movement with a system that includes two silicon-based balance wheels which connect via a novel differential system with a “vertical” design layout. The system was apparently developed in collaboration first with Ms. Carole Forestier Kasapi (of Cartier renown and now at TAG Heuer) and then later with the brilliant Mr. Ludwig Oechslin, who finalized the mechanism for Ulysse Nardin, and who has been part of many of the brand’s more mechanically incredible products. Furthermore, the Freak S watch builds on technology Ulysse Nardin introduced in the Freak Vision watch that I reviewed on aBlogtoWatch here.

Does this new double balance system add functional or practical value to the time-telling mechanism? Well, ummm, you see… No. It doesn’t add practicality, but it does add emotion and visual animation. High-end watches like the Freak S are small mechanical circus acts on the wrist. They are meant to dazzle, to entertain, and to help the imagination of the wearer soar. They aren’t always meant to do traditional things such as improve time-telling accuracy or add new information displaying functionality. From a design perspective, Ulysse Nardin said the mechanical mechanism on the dial “resembles a space vessel with twin reactors.” So, as you can see, there is an imaginative, playful element to this otherwise high-end mechanical creation. 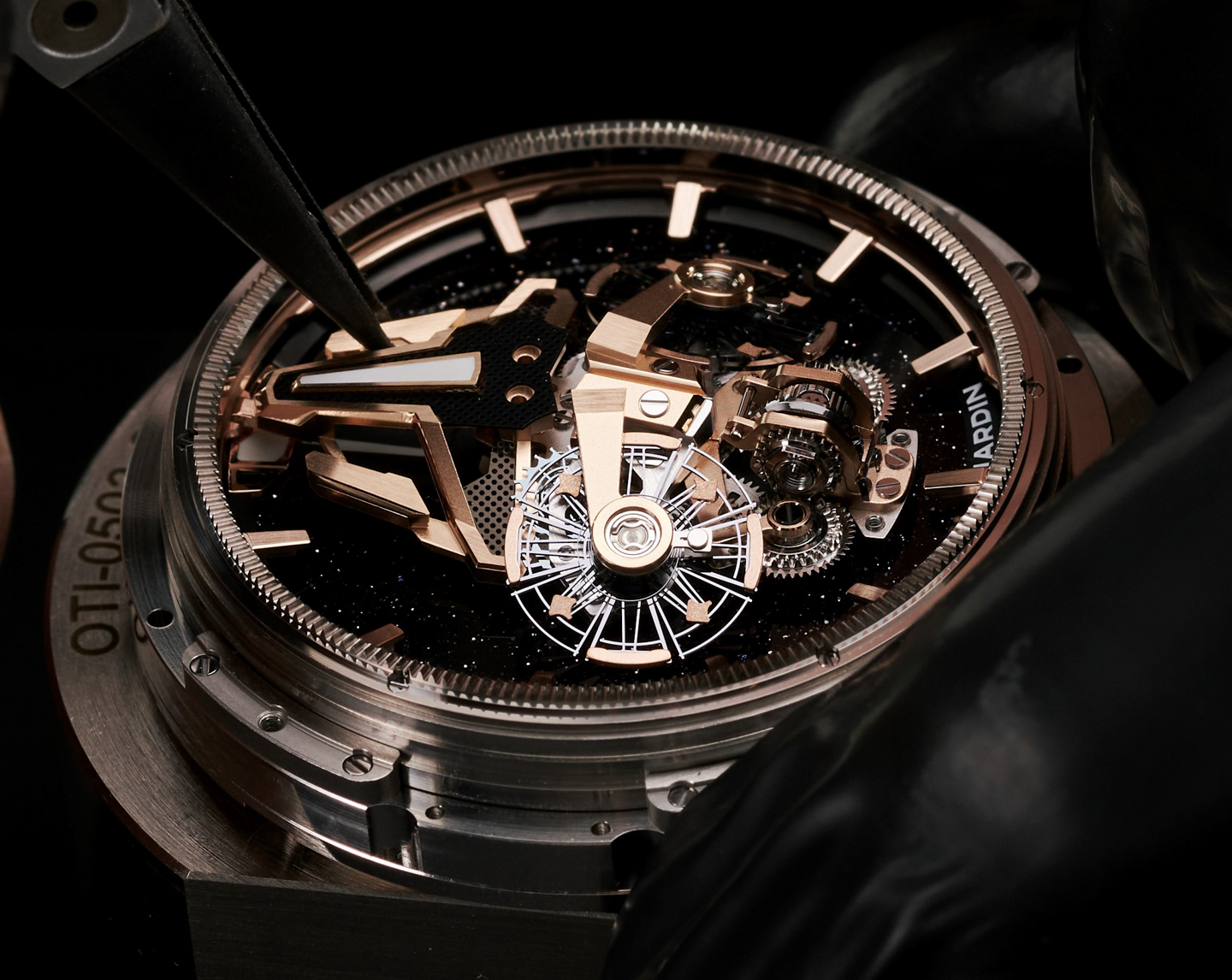 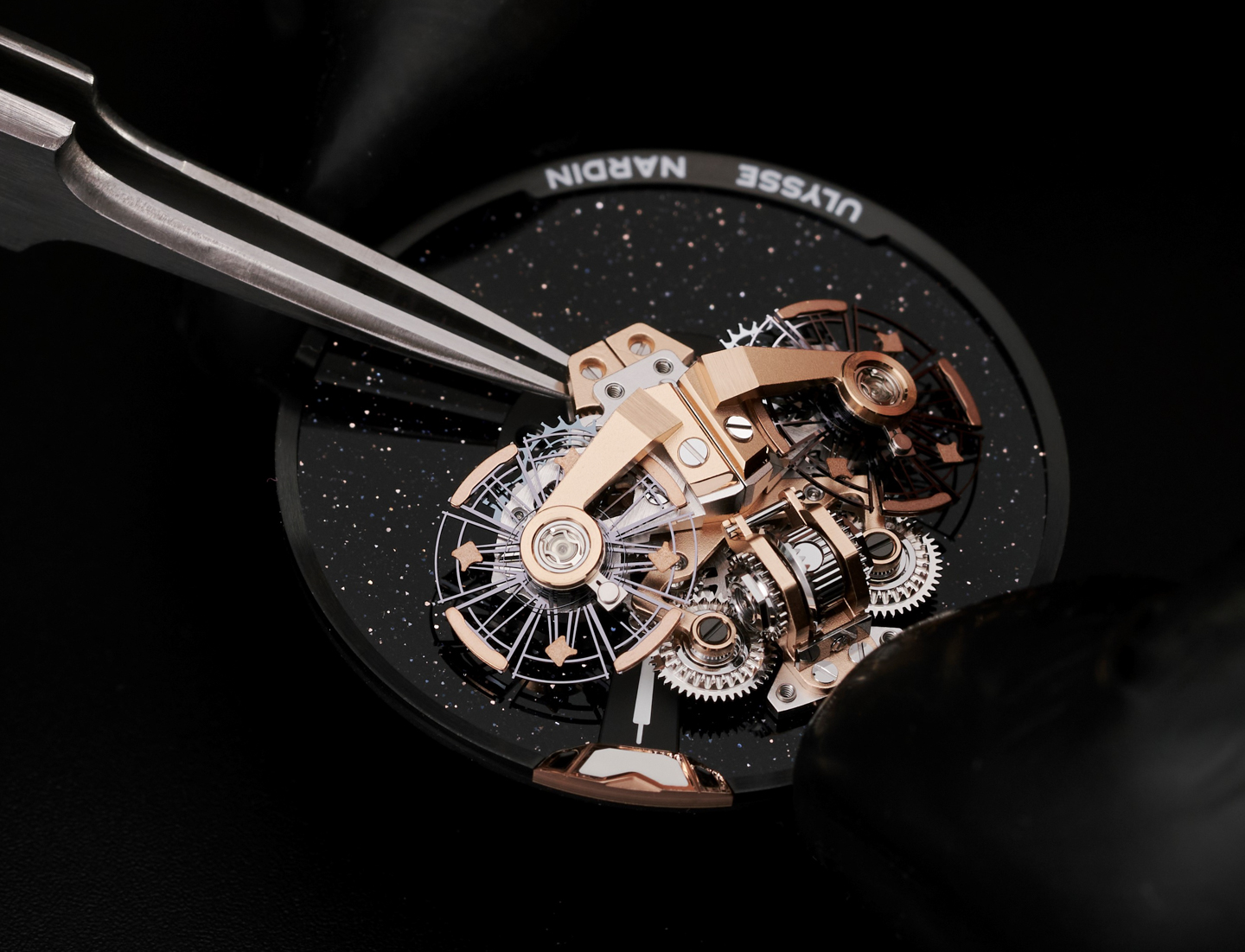 In 2001, when Ulysse Nardin first introduced the Freak watch collection, the point of the watch to was to use silicon parts and display as much of the movement as possible on the dial. This tradition has carried on giving all the Freak watches their distinctive dials which include large minute hands which double as the bridges for the regulation system, as well as a focus on silicon parts. In this watch, silicon is used for various parts of the movement including the visible balance wheels and balance springs. The silicon is produced in a way to be harder and more durable and is coated with diamond material, resulting in a proprietary material that Ulysse Nardin has been calling DiamonSil. The brand tried to industrialize it and make all of its silicon components DiamonSil a few years back. I don’t know all the details but my understanding is that the cost of the process was a bit prohibitive for mass implementation so the caliber UN-118 movement (not the one in this Freak) still uses DiamonSil, but this was not all Ulysse Nardin movements. That makes the DiamonSil-equipped Ulysse Nardin watches desirable, as well as exotic. Given the $100,000 price point of the Freak S, I think it is entirely logical that the silicon parts in the movement are DiamonSil.

The movement inside the reference 2513 500LE 2A BLACK 5N/1A Freak S watch is the in-house caliber UN-251 automatic. As with classic Freak watches, the time is set via the bezel and the watch is manually wound via the caseback bezel. The case has no traditional crown but rather a small tab on the front of the case under the 6 o’clock hour position that is lifted to allow the bezel to move and adjust the time. The movement indicates just the time with hours and minutes and has a power reserve of 72 hours. The automatic winding system has the rather unfortunate name of “Grinder” (though once you understand the technology you’d be just as mystified as the prospect of how to name it). It is rather cool in operation because it is able to transmit much less energy to winding the mainspring and uses an entirely different mechanical concept to translate wrist movement into torque to wind a mainspring. Practically speaking, Ulysse Nardin says that a Grinder automatic winding system is about twice as efficient as a traditional oscillating weight automatic winding system — not bad, actually. 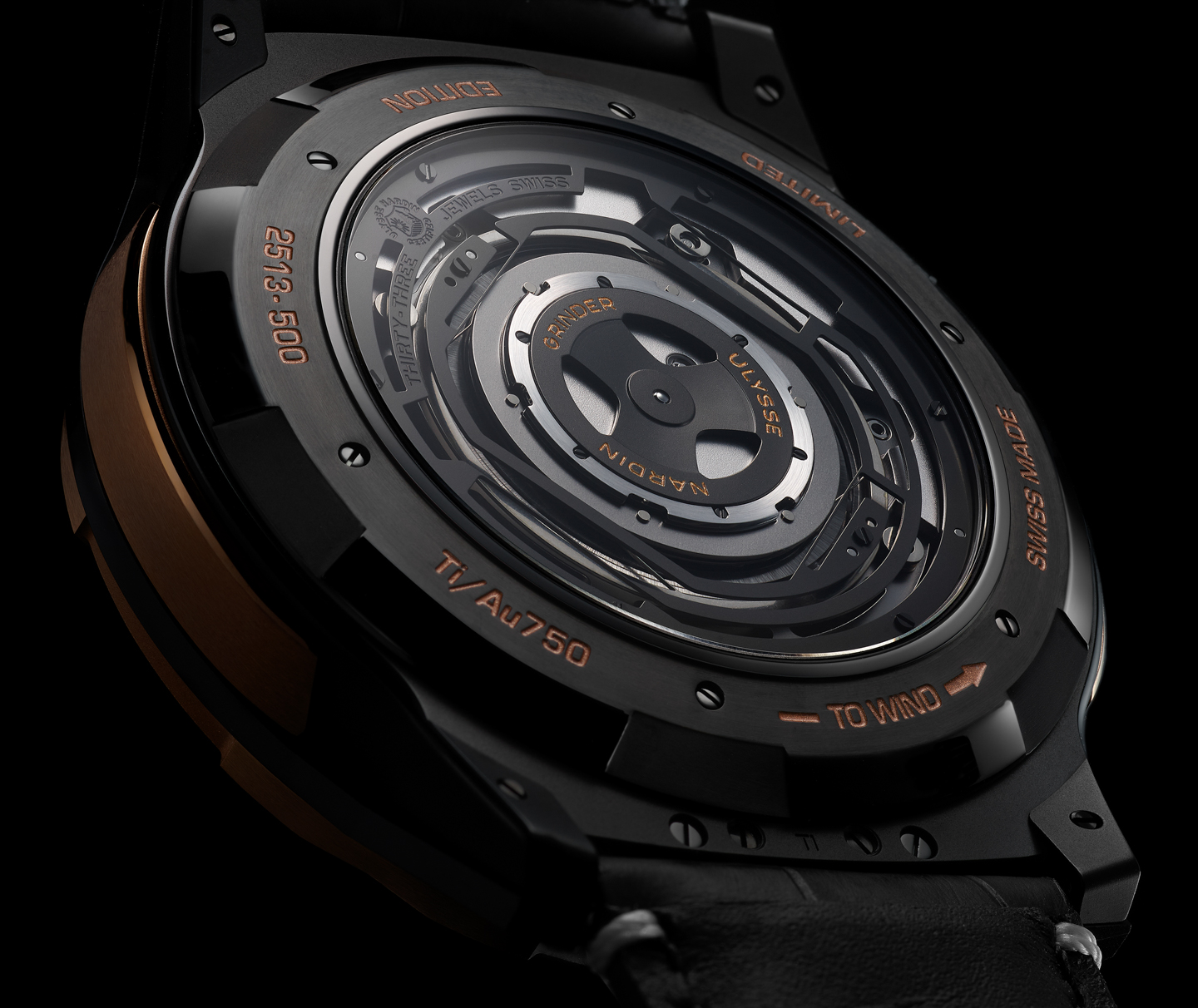 The “space vessel” minute hand is outfitted with opposing, inclined 2.5Hz DiamonSil (with some metal weights) balance wheels and matching DiamonSil balance springs. They are coupled to a novel-looking differential system that combines their mutual operations into one output for the timing system in the movement. What is so fascinating is less about what it does and more about how it does it. The system is visually very satisfying as your eyes can easily start to understand how the movement works and what propels the minute hand around the main dial. Speaking of the main dial, in this debut limited edition of the Freak S, the reference 2513 500LE 2A BLACK 5N/1A has a deep blue aventurine dial that is reminiscent of deep star-speckled space. On the periphery of the dial is a smaller but legible hour hand.

The steady 2.5Hz (18,000 bph) rate is not very fast but visually makes a case for itself as quicker frequency movements aren’t always as visually stimulating. With all the wear and tear on this movement, one does wonder about service intervals. In a sense, you really never know until enough people start wearing these watches regularly. So is the fun of trying to industrialize and perfect all of these brand-new micro-mechanical systems all the time. 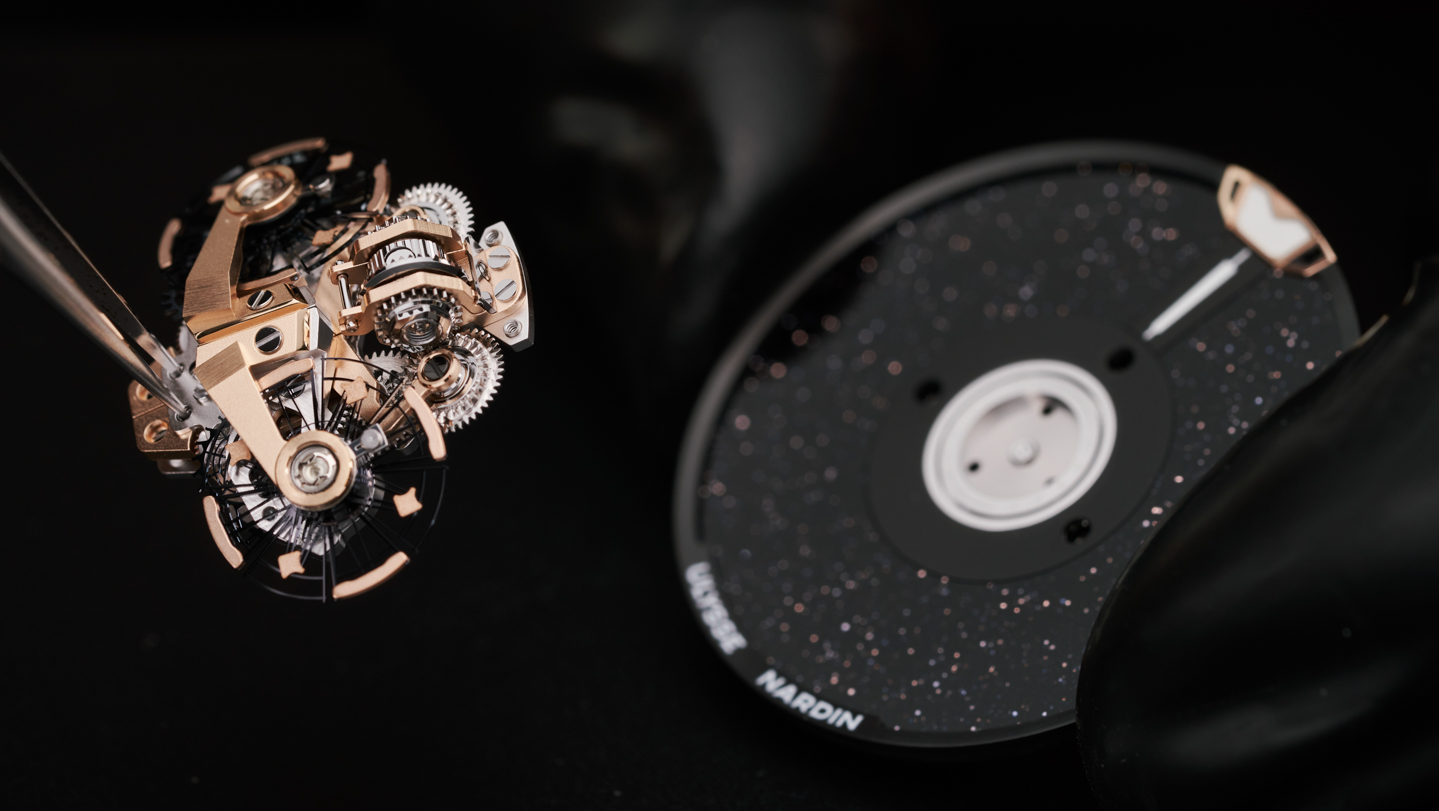 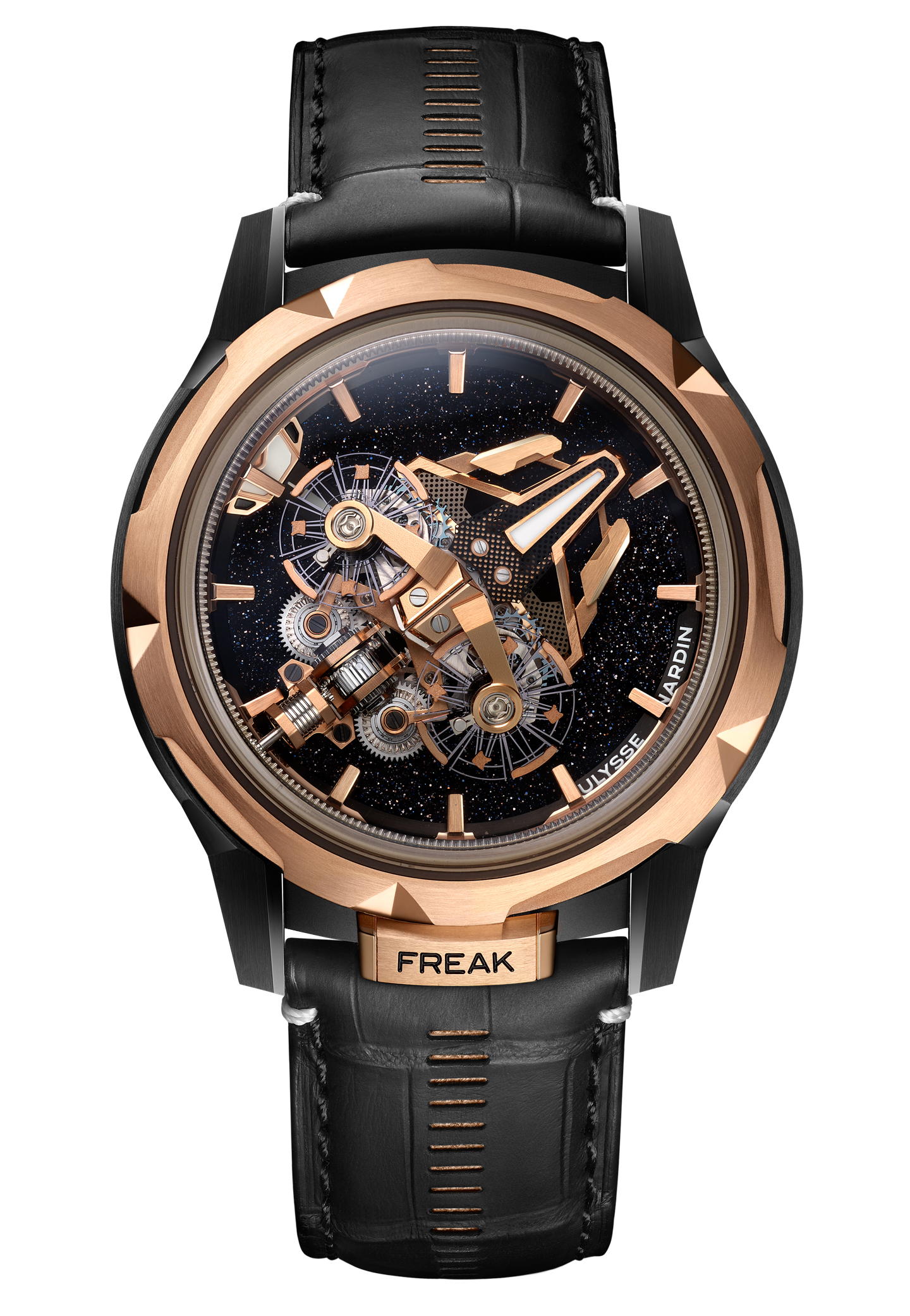 Ulysse Nardin has made it clear that this limited-edition launch version of the Freak S is just the start, and that future iterations will come. This debut model will be limited to 75 pieces, but only 40 of them will be produced in 2022, the first year of production. The Freak S is 45mm-wide and is water-resistant to 30 meters with a box-style sapphire crystal over the tall dial. The case is mostly produced from black ceramic, with sections of black DLC-coated titanium as well as 18k rose gold for visual pizazz and for segments such as the bezels. This is a brand new case design for the Ulysse Nardin freak and it will be interesting to try it on. It looks comfortable with steep lugs and masculine with a sharp, edgy design sort of like a Roger Dubuis Excaliber got crossed with a TAG Heuer Carrera. Attached to the case is a black alligator with a calf-leather strap with a deployant clasp system.

I look forward to checking out this new Freak technology and Freak look from Ulysse Nardin. The price is high, of course, but not as high as some others in the space that don’t offer as much originality or spirit. Price for the limited edition of 75 pieces reference 2513 500LE 2A BLACK 5N/1A Ulysse Nardin Freak S watch is $137,200 USD. Learn more at the Ulysse Nardin website here.