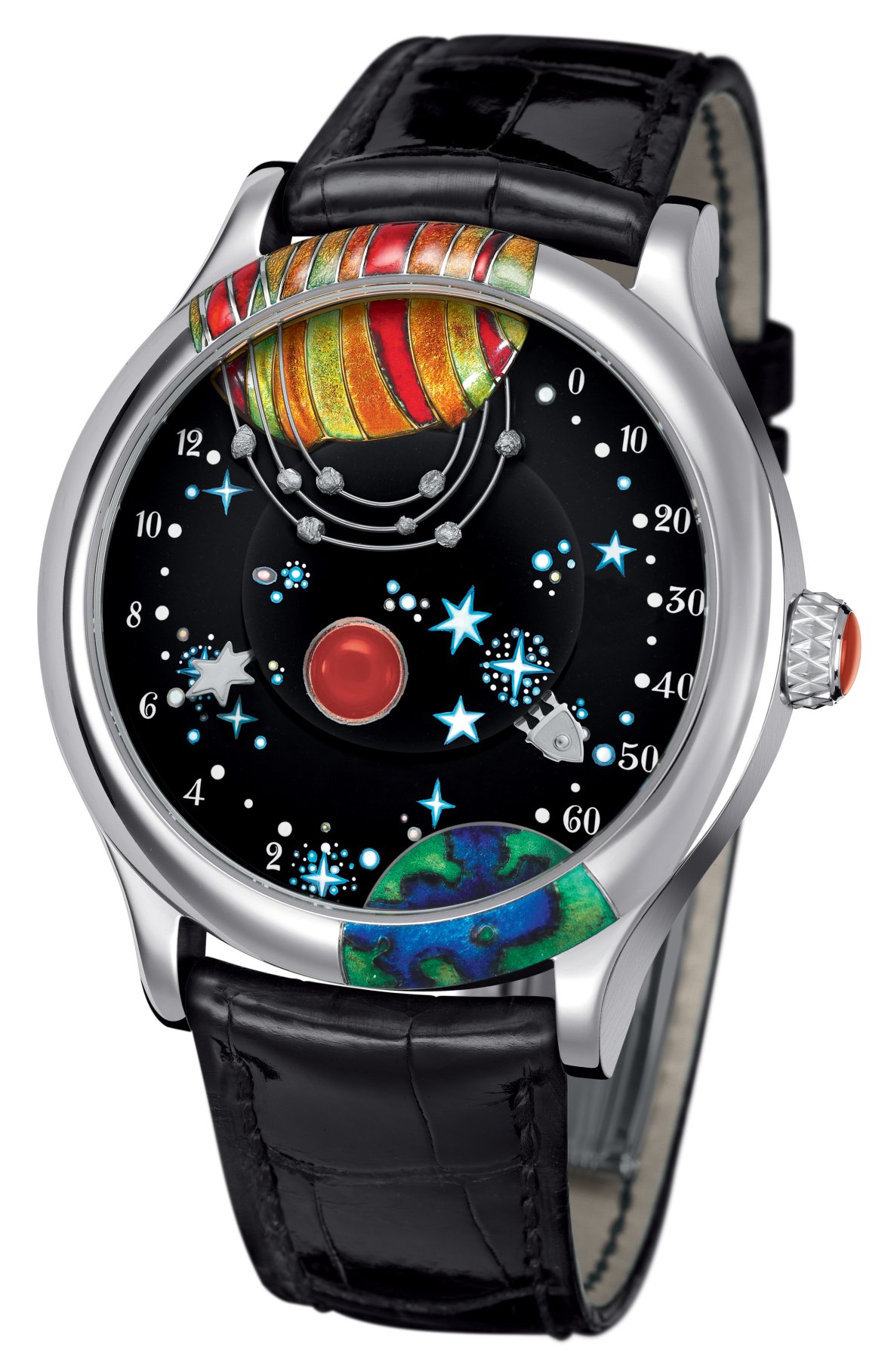 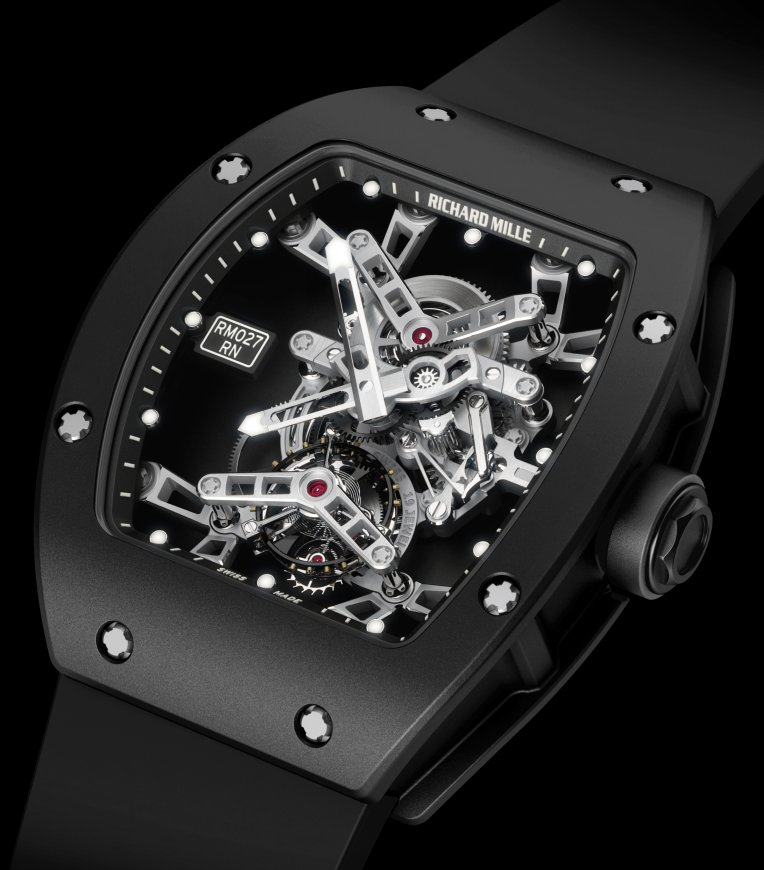 Antiquorum Auctioneers – The collection of unique 40 timepieces achieves € 4.5 million at the Only Watch Charity Auction: Monaco, September 24, 2011 – The fourth edition of the biennial Only Watch Charity Auction held at the Hotel Hermitage in Monaco on September 23, in the presence of H.S.H. Prince Albert II of Monaco, closed with an outstanding result of EUR 4’563’000. The auction room was full in addition to the strong internet and intense telephone bidding. International participation included Japan, Switzerland, Hong Kong, China, the United States and the Russian Federation. Ronnie Wood from the Rolling Stones was also present in the room to support the auction. 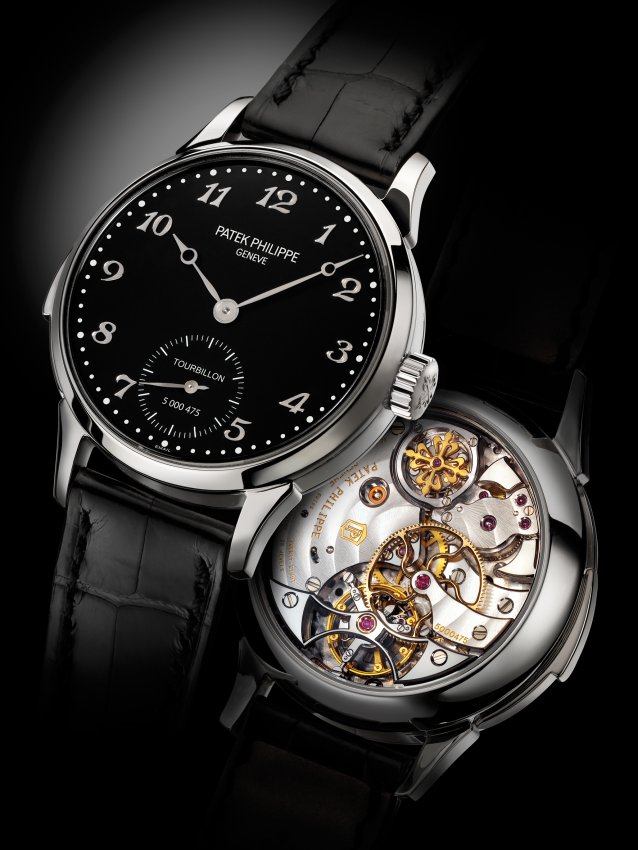 Lot 23 was the Ikepod Hour Glass. A couple weeks ago I wrote:

“I say timepieces and not watches if for no other reason than the always iconoclastic Ikepod is presenting an hourglass (lot #23) for 2011! It’s a limited edition of one (see non-limited flavor). It’s fantastic. Something a little different from one of my favorite brands. The “Wish Price” for this item is 15,000 – 25,000. Compared to the other items in this auction the hourglass is a steal. And you’ll never need to get it serviced as long as you never drop it.”

Looks like their estimate nailed it. And we were correct about this item being a deal compared to much of the rest of the auction. 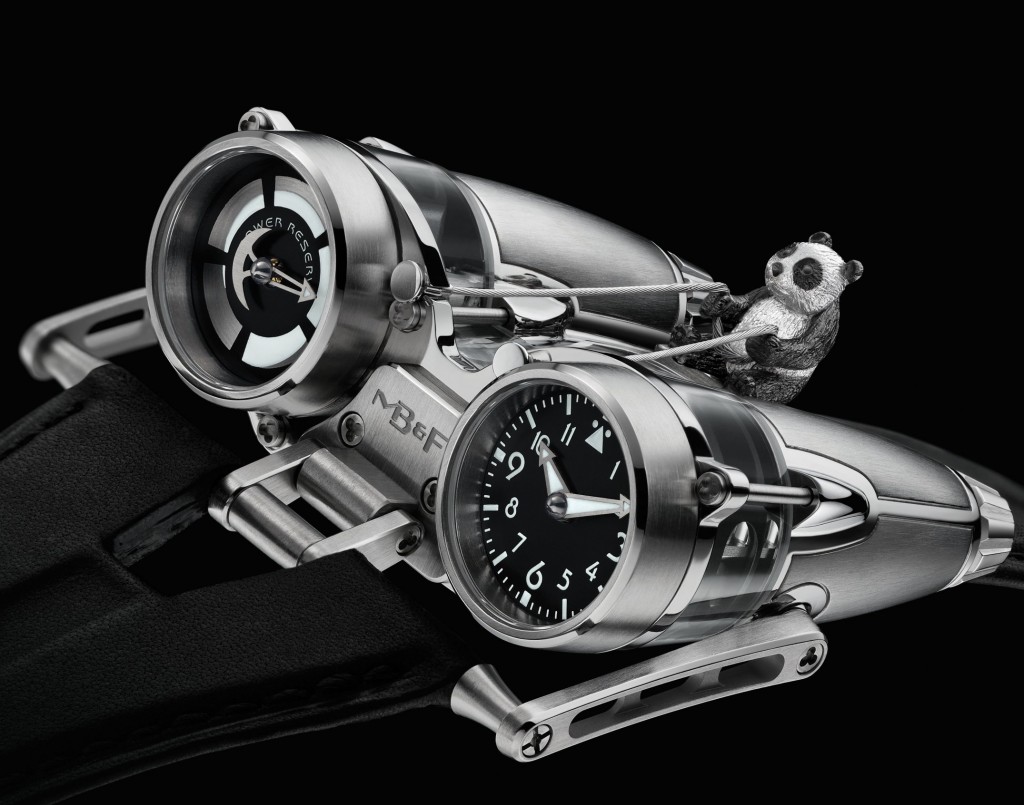 And what of Lot #28, the MB&F Horological Machine No.4 Thunderbolt “Flying Panda?” Earlier, I wrote:

The two large horizontal cones/tubes that are the displays remind the wearer of the A-10 Thunderbolt warplane. The two pods look like jet turbines. And the “Flying Panda” angle? Well, there’s a small panda sitting atop the watch holding reigns, not unlike Ben-Hur on his chariot, or even Santa on his sleigh. Make no mistake, it’s an odd combo, but if anyone has the horological street-cred to pull it off, MB&F does. The details: manual wind, twin mainspring barrels, and 50 jewels. The “Wish Price” for this item is EUR 170,000 – 230,000.

This MB&F finished at € 170,000, frankly, rather disappointing in my opinion. I really could have seen this easily hitting €250,000, especially considering that these official estimates of hammer prices are intentionally low. Was it the economy? Maybe collectors move to the finest houses in economic downturns and times of certainty. That explanation would at least seem to partially explain the amazing result for the Patek. 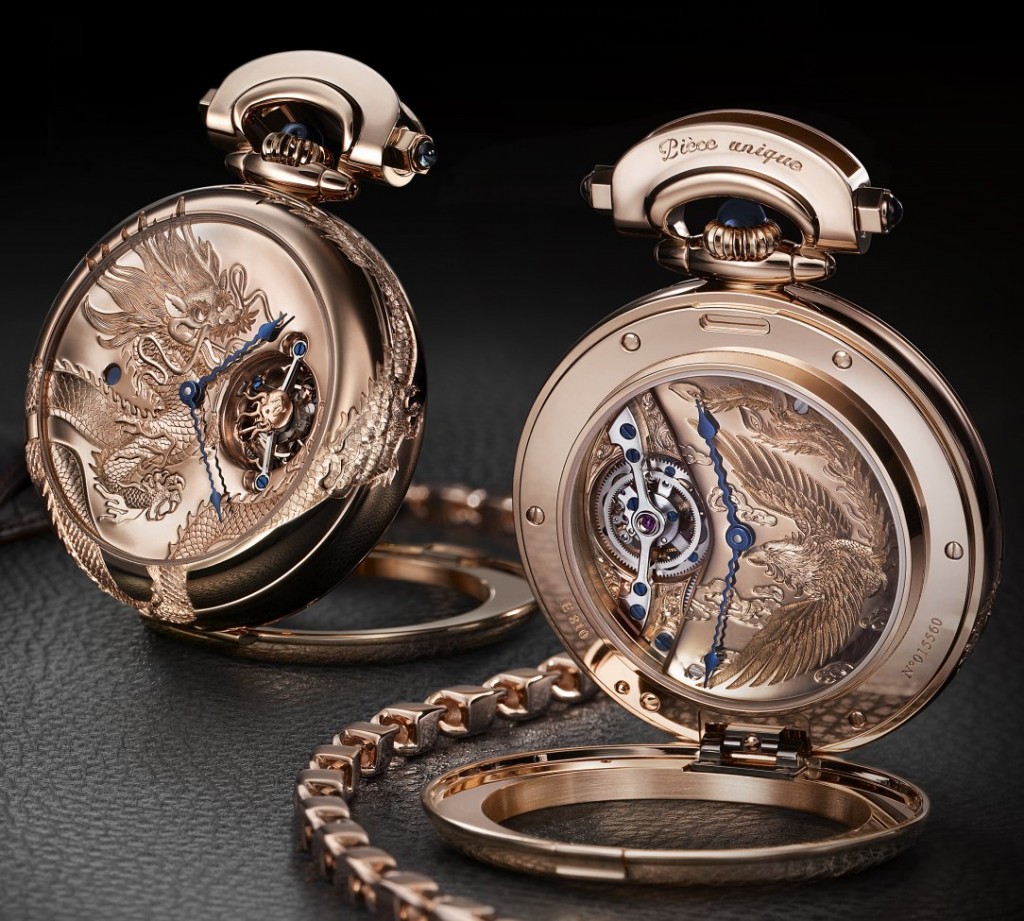 Lot 5: Bovet, Amadeo Dragon & Phoenix
Wish Price: €180.000 to €220.000
Result: €70.000
Analysis: “Ouch” would be an understatement here. Bovet is one of those “newish” brands that has tried to conjure up a rich and deep aura around itself. Pascal Raffy has become a watch industry celeb second only to maybe the Great J.C. Biver.  In my opinion, this may be due partially to the fact that we are talking about a pocket watch. I don’t particularly care how well-heeled one is. If you drop tens of thousands on a watch, you’re going to want to wear it at least a few times. And unless you’re decked-out in morning dress, in 2011 a pocket watch is a bit of an affectation. The €70.000 here has to be a bit of an embarrassment no matter how you spin it. 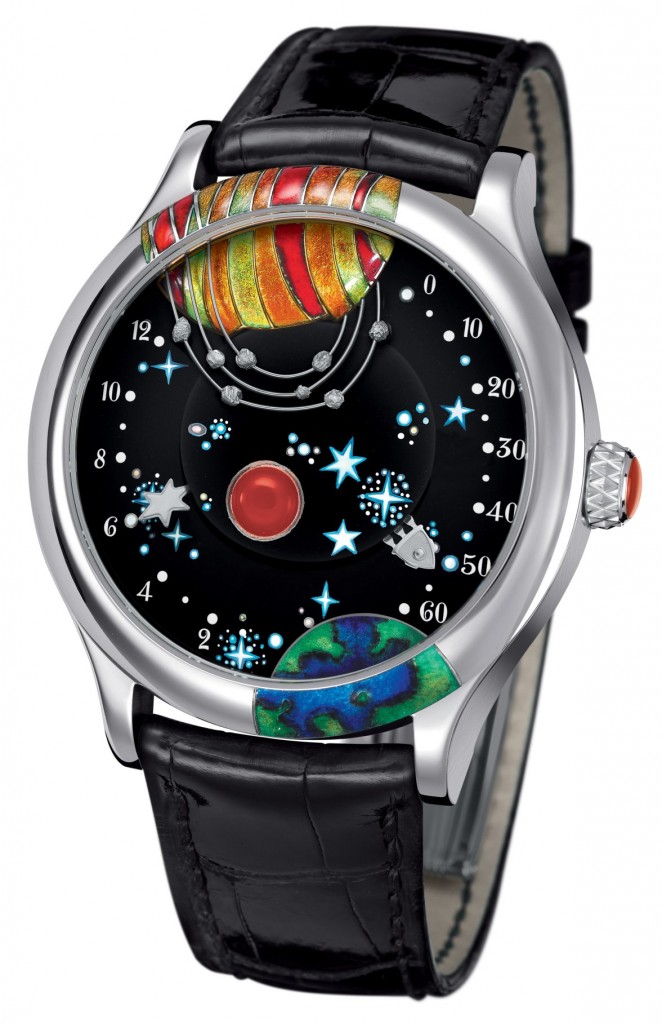 A final thought on the diminutive Patek. Years ago a man’s watch was full-sized at 36mm, then later at 38mm. Over the last decade we’ve seen this creep upwards of 45mm in many cases (yes, Panerai and Graham, we’re looking at you). You would have to go upwards of 45mm before many people would today raise their eyebrows and wonder if a watch was simply too big. I guess 45mm is the new 38mm? So it’s not like Patek has offered a 37mm watch here and it’s being called small. 33.3mm is REALLY small. I wonder if this could be a new trend bringing us back to case-size sanity? I think it’s worth noting that purely from an engineering standpoint, putting a tourbillon and minute-repeater into a 33.3mm case is much more of a feat than doing so in a 48mm case.

And let’s look a bit more at the steel issue. The Patek, far and away the highest priced item here, is stainless steel, as is the Ulysse Nardin “Freak Diavolo.” Is this a new trend in high-end watches? Or more appropriately, is it coming back into vogue. I think that the use of stainless steel in expensive watches was first done bu Audemars Piguet with their Gerald Genta-designed Royal Oak circa 1972. Traditionally, fine watches are offered in gold or some other precious metal. Is steel back?

Here are the top 10 watches in terms of final hammer prices: 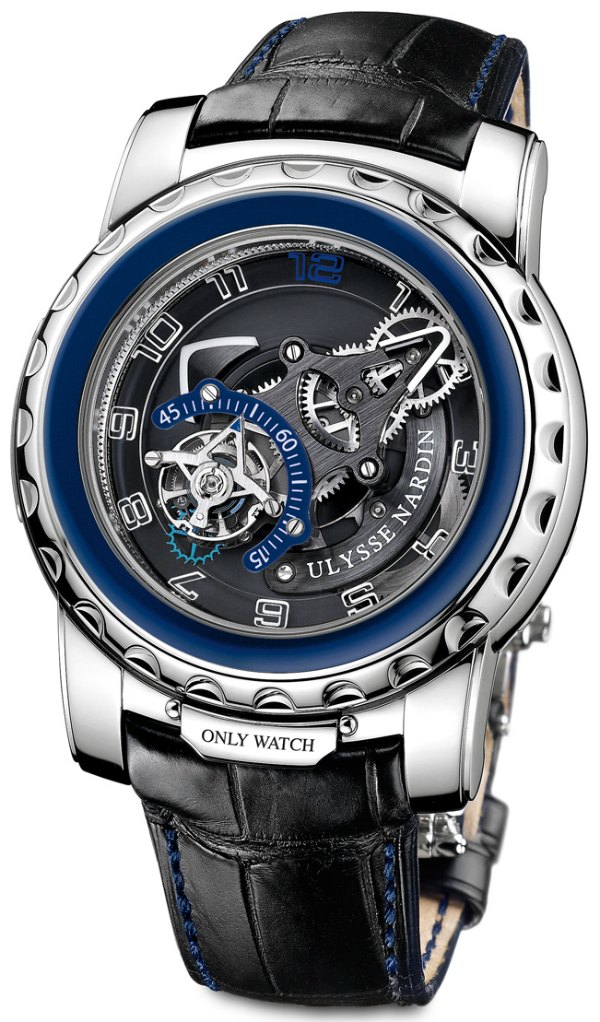 The Patek, Gagarin Tourbillon, Breguet, Chanel, Celsius, Franck Muller, Frederique Constant, Piaget, Ulysse Nardin, and Van Cleef & Arpels all beat their estimates. Of the forty watches in the auction, nearly half (18) failed to hit their minimum estimate. Overall, I think that while the auction did raise a great deal of money for charity, and gave the manufactures some fine P.R., the results show the realities of the world’s financial woes.