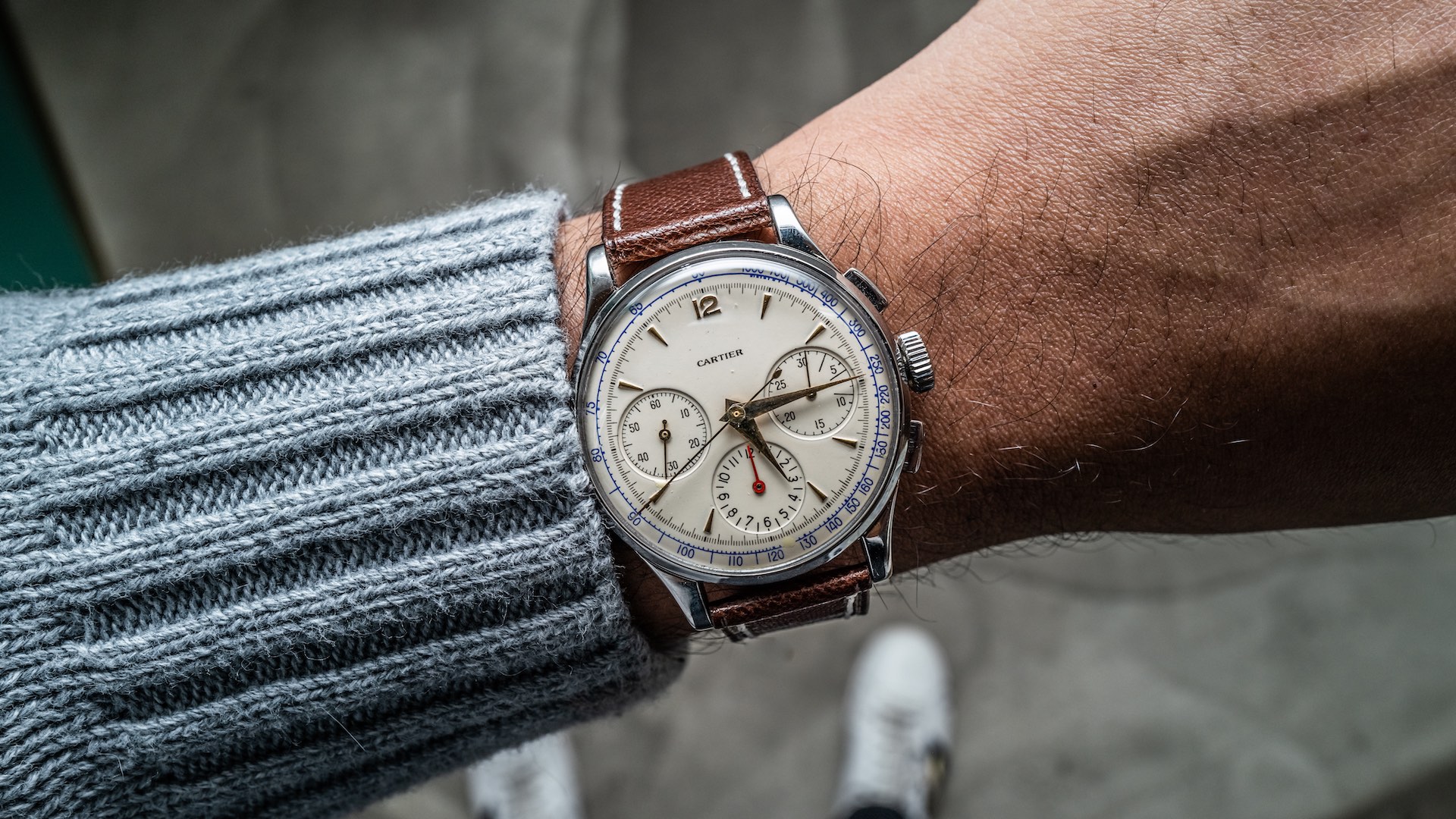 Running now through February 19th at Dover Street Market here in Los Angeles’ Arts District is an unexpected and totally captivating vintage Cartier exhibition by Harry Fane, who is a British collector, gallerist, and Cartier expert. Dover Street Market is a large retail space that sells brands like Comme des Garçons (whose founder, Rei Kawakubo, opened the multi-city space) and Maison Margiela. I love that Fane chose such a compelling venue that doesn’t fall into the usual Beverly Hills spots, which can get pretty stale and a bit obvious. The exhibit is a collection of 36 important vintage Cartier watches and, while there is a focus on the Tank, there are several other vintage Cartier pieces, as well. The watches exhibited include several Tank Normale (which was the first Tank), several Cintrée pieces, a Cartier Reverso, a Cartier/Piaget Tank, and others that I’ll discuss here. 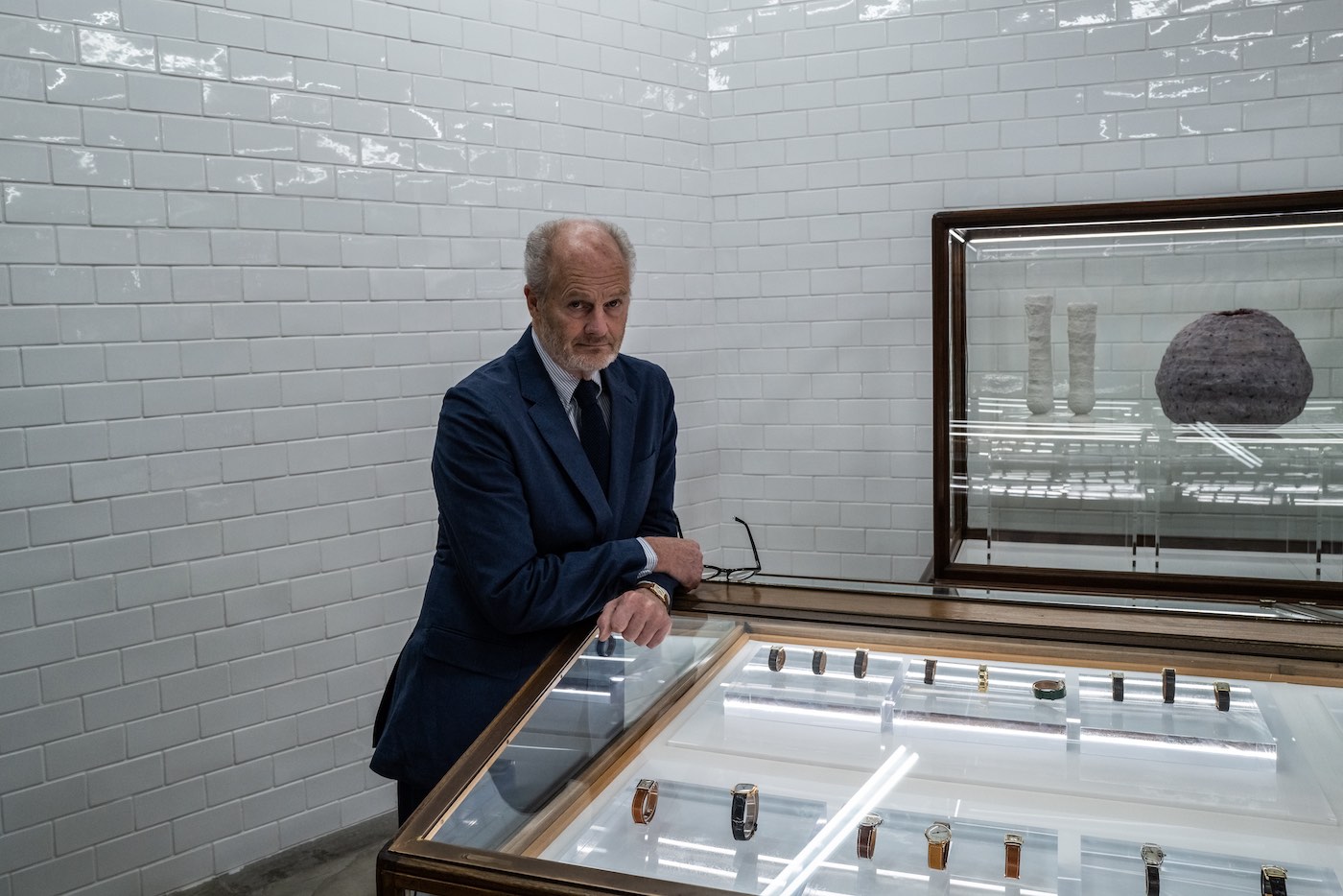 In a world of Rolex and Patek Philippe consuming so much attention in the vintage world, Harry Fane comes off as a bit of an evangelist when opining about his beloved vintage Cartier, specifically the Tank dating between 1919 and 1965, though there are a handful of exceptions. I went to see him at the Dover Street Market on the second day of his exhibit, and he informed me that it would be 35 vintage Cartier rather than 36, as he had just sold the one Crash he had. (I believe that one was asking $115,000.) 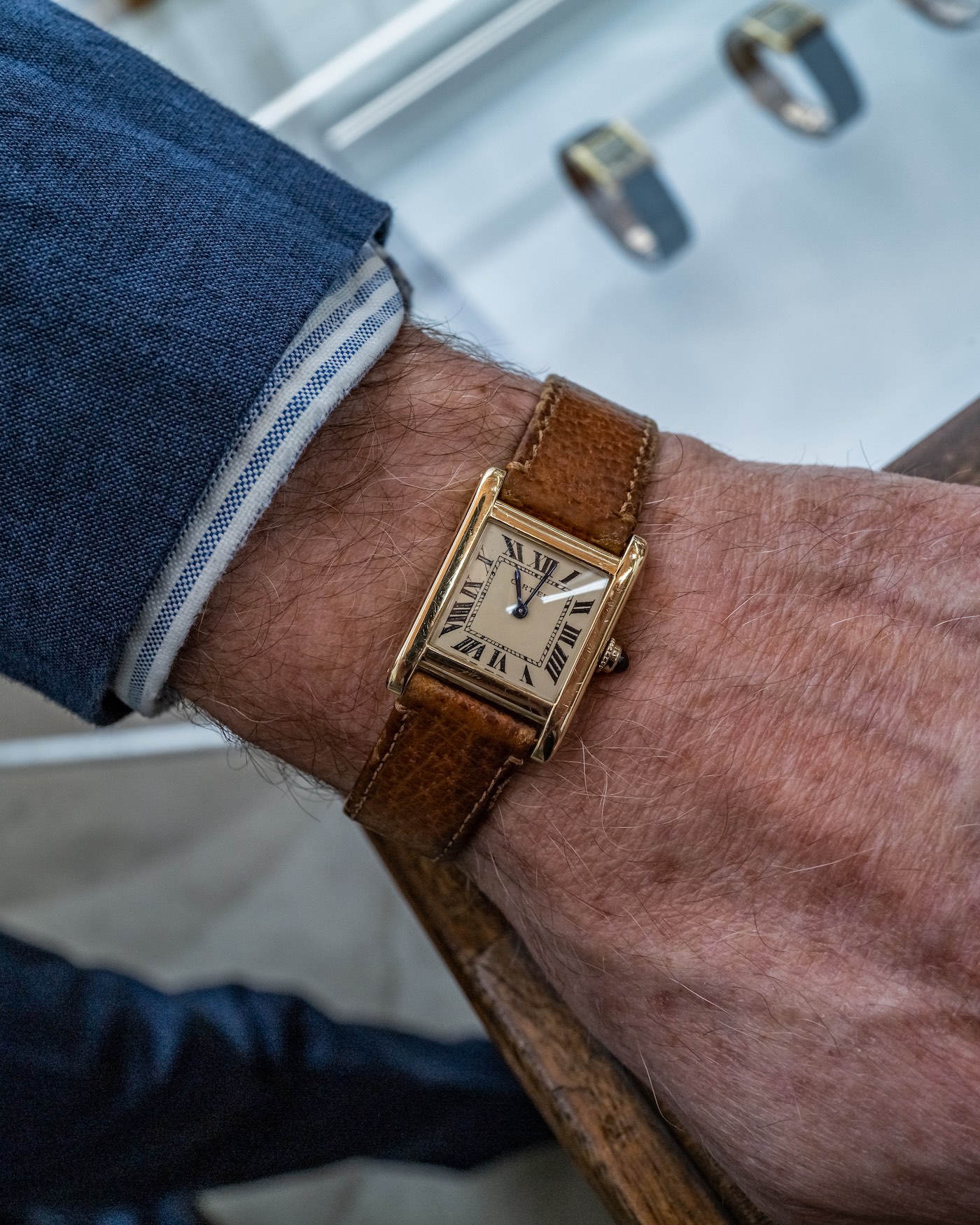 The Cartier Tank Normale that Fane himself wears

I wasn’t surprised when Harry told me about how limited Tank production was pre-1965, but it’s stark when you consider that, between the years of 1919-1965, there were only 2,200 pieces produced in total. After this time period, production would ramp up to 10,000 pieces annually and only grow from there. There is something uniquely romantic about Cartier pieces from this early era when holding and wearing them, thinking about streets in Paris from a world long gone. 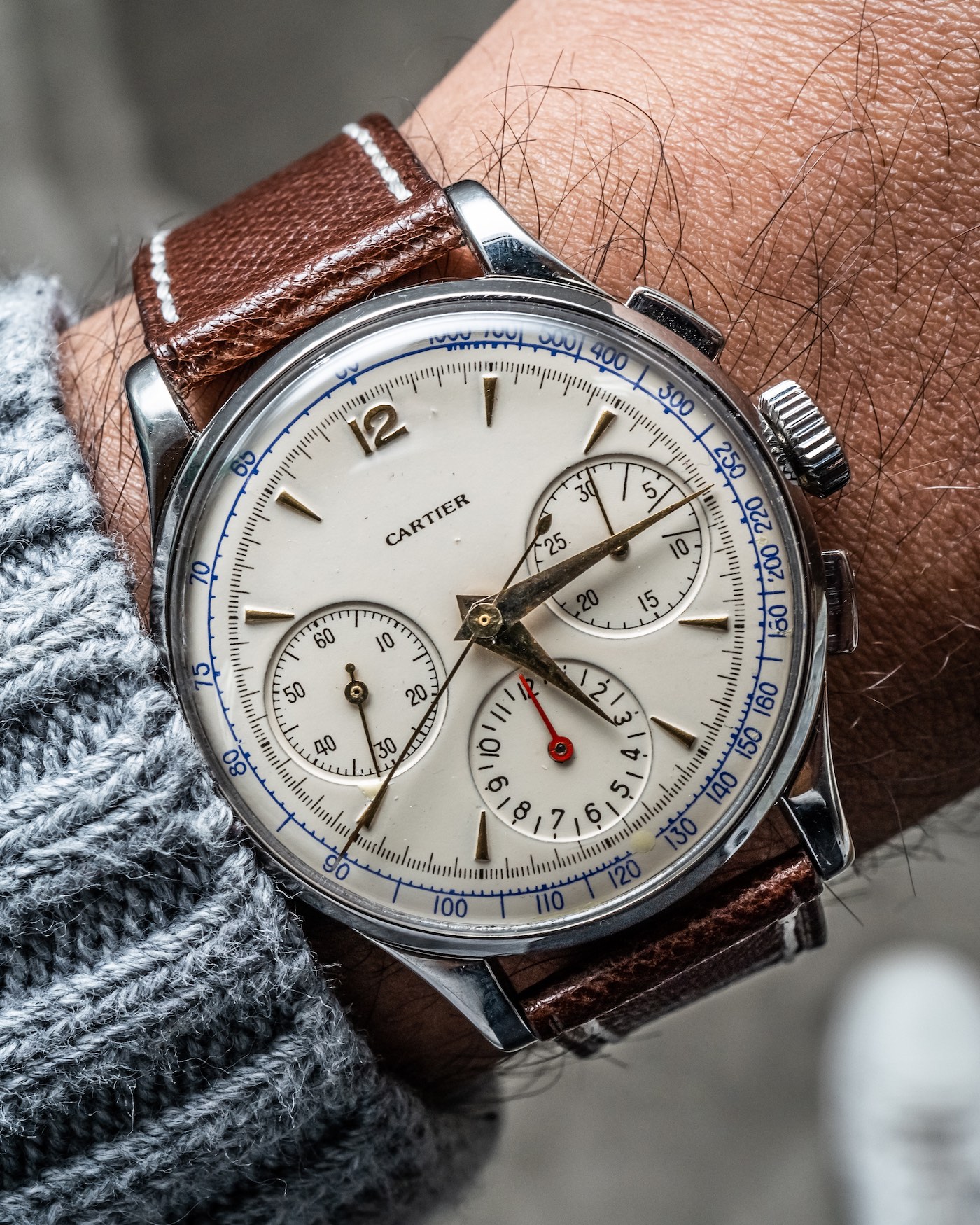 It would be prohibitive to go through each of the remaining 34 vintage Cartiers, but I did want to discuss a few that stood out to me. Ironically, one that I initially couldn’t take my eyes off wasn’t a Tank model, rather a stainless steel chronograph that dates back to 1950. Admittedly, I’d never seen one of these before, which is a bit surprising, though I can’t imagine more than a handful of these were ever produced. 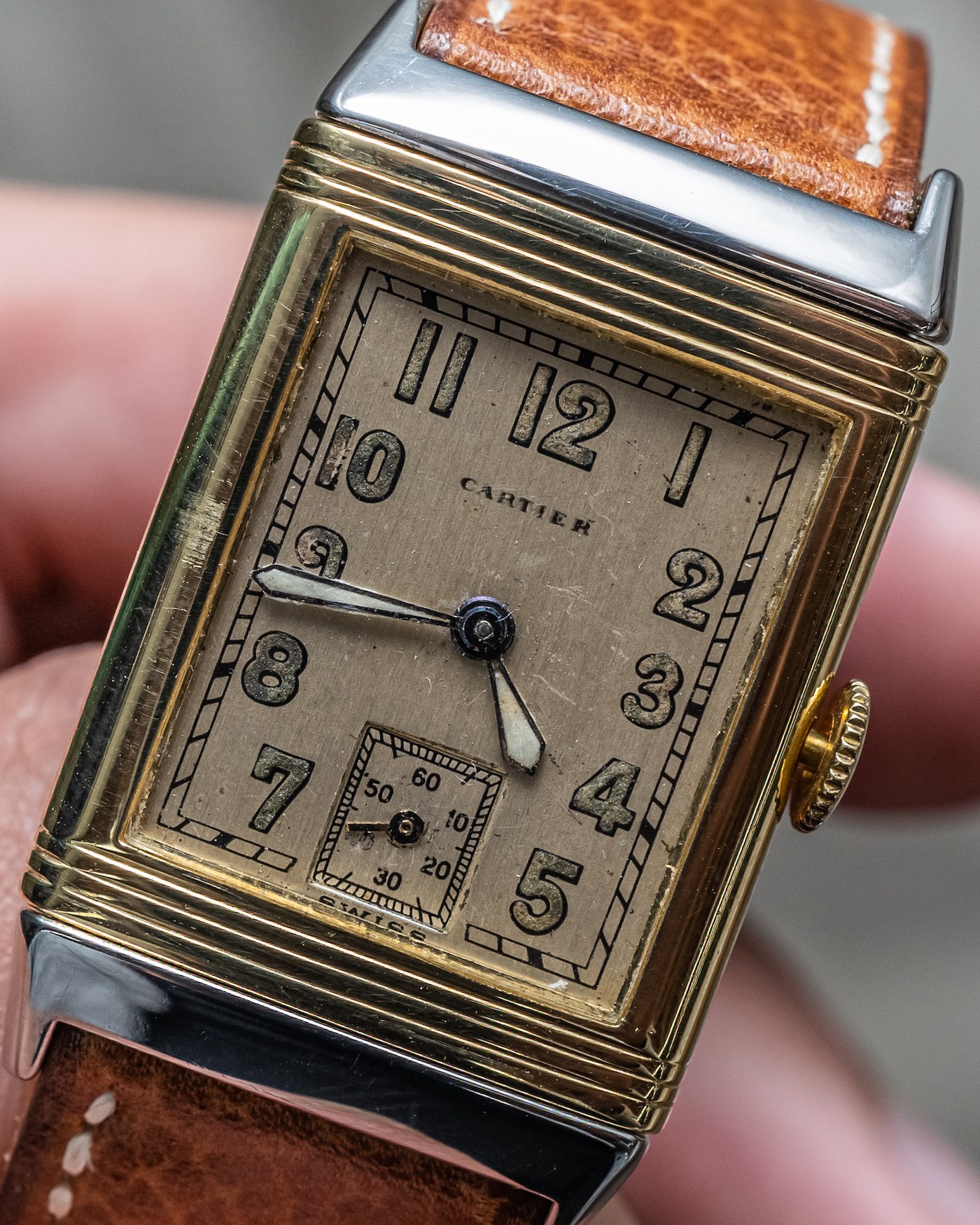 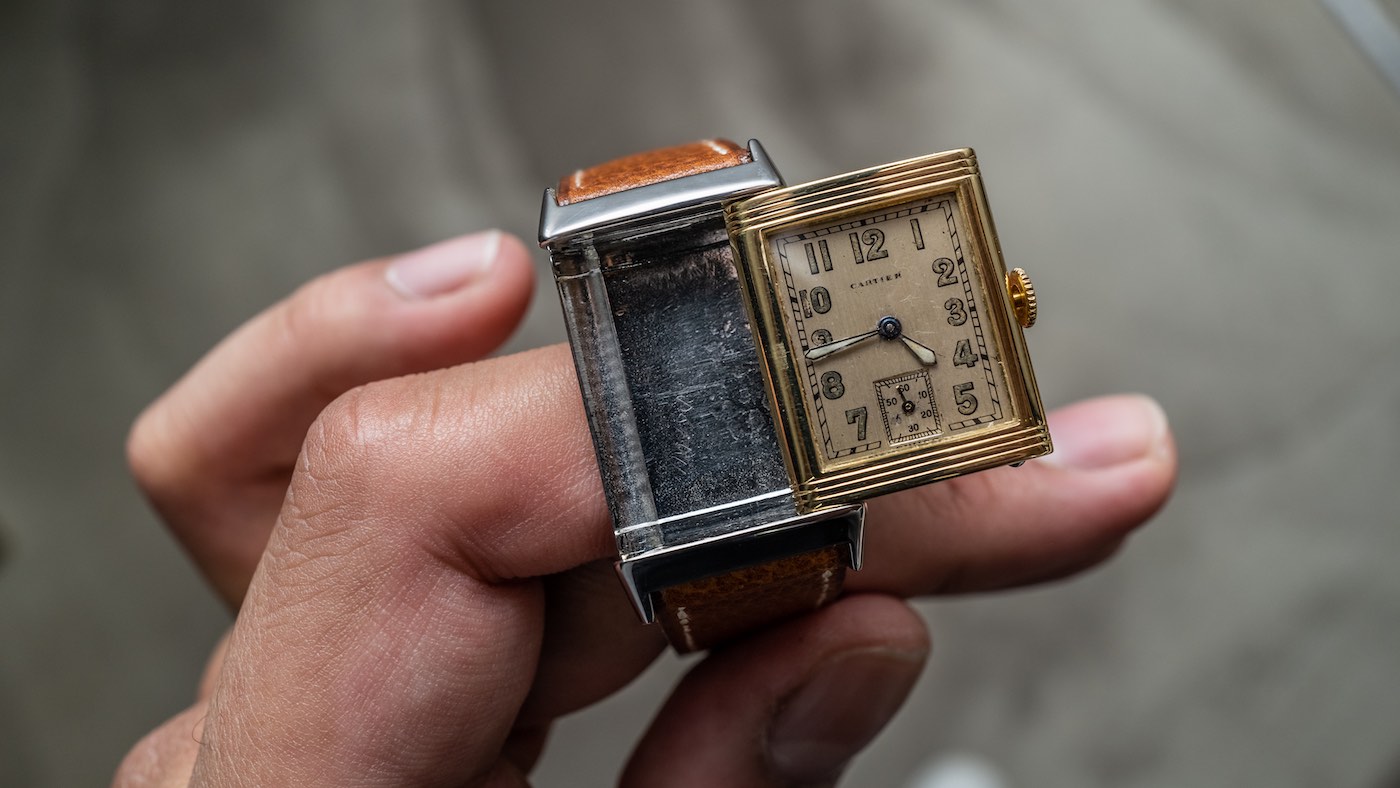 A “Cartier Reverso” combines the Cartier Tank with the Jaeger-LeCoultre Reverso (JLC produced all their movements back in the day) in a gold and steel piece that dates to 1947. Note that this is not the Cartier Tank Basculante, which was Cartier’s own take on the reversible dial watch in a rectangular case. 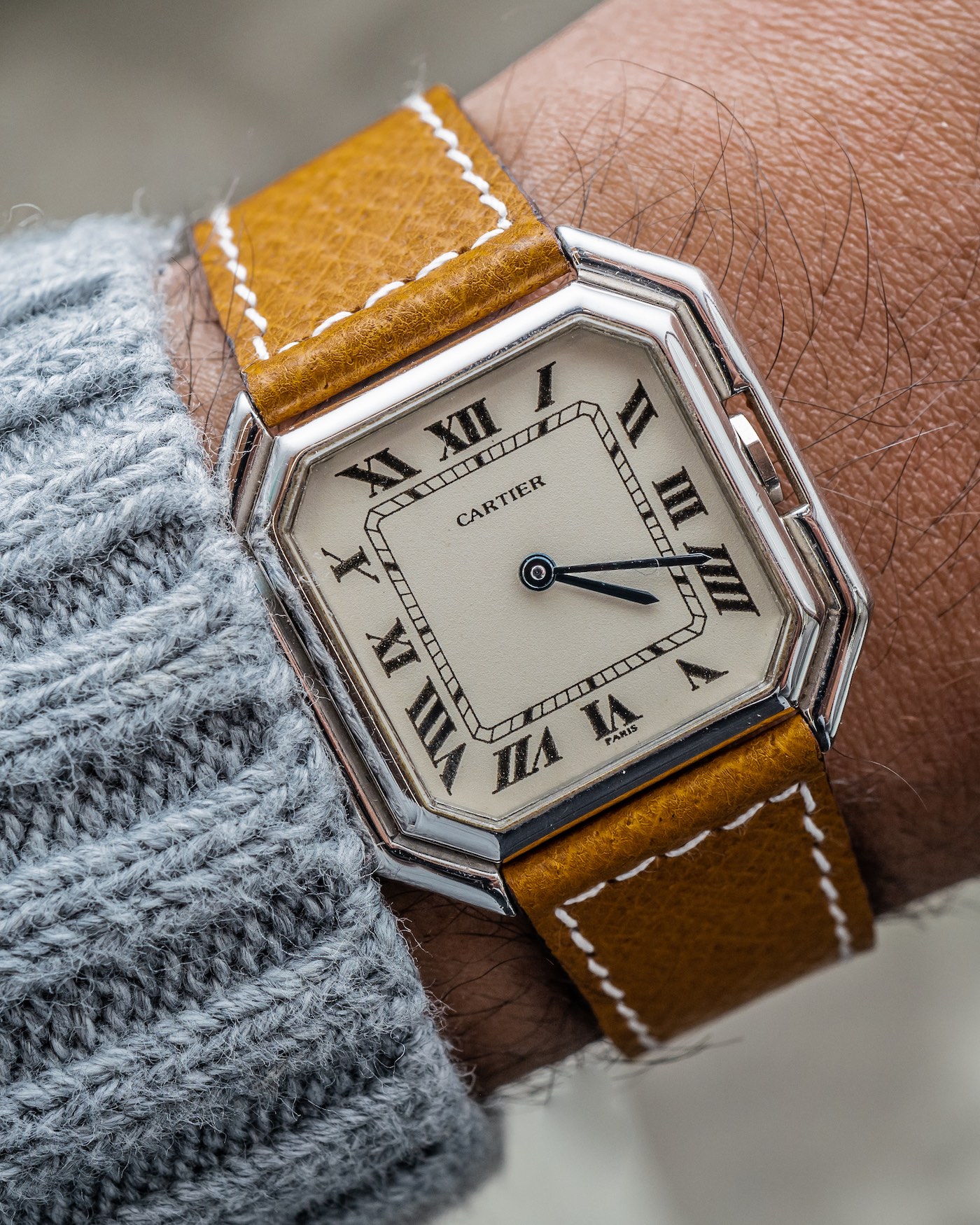 The Tank is most often associated with the rectangular case, and there are several of these at Fane’s exhibit. A Cartier Tank “Gondole” from the 1970s has a stepped gold case and is quite reminiscent of the Patek Ellipse. However, a Ceinture Automatique, also from the 1970s, has a “belt buckle” case shape with crown protector that I can’t help but love largely due to the fact that it’s in white gold, which you don’t see often. 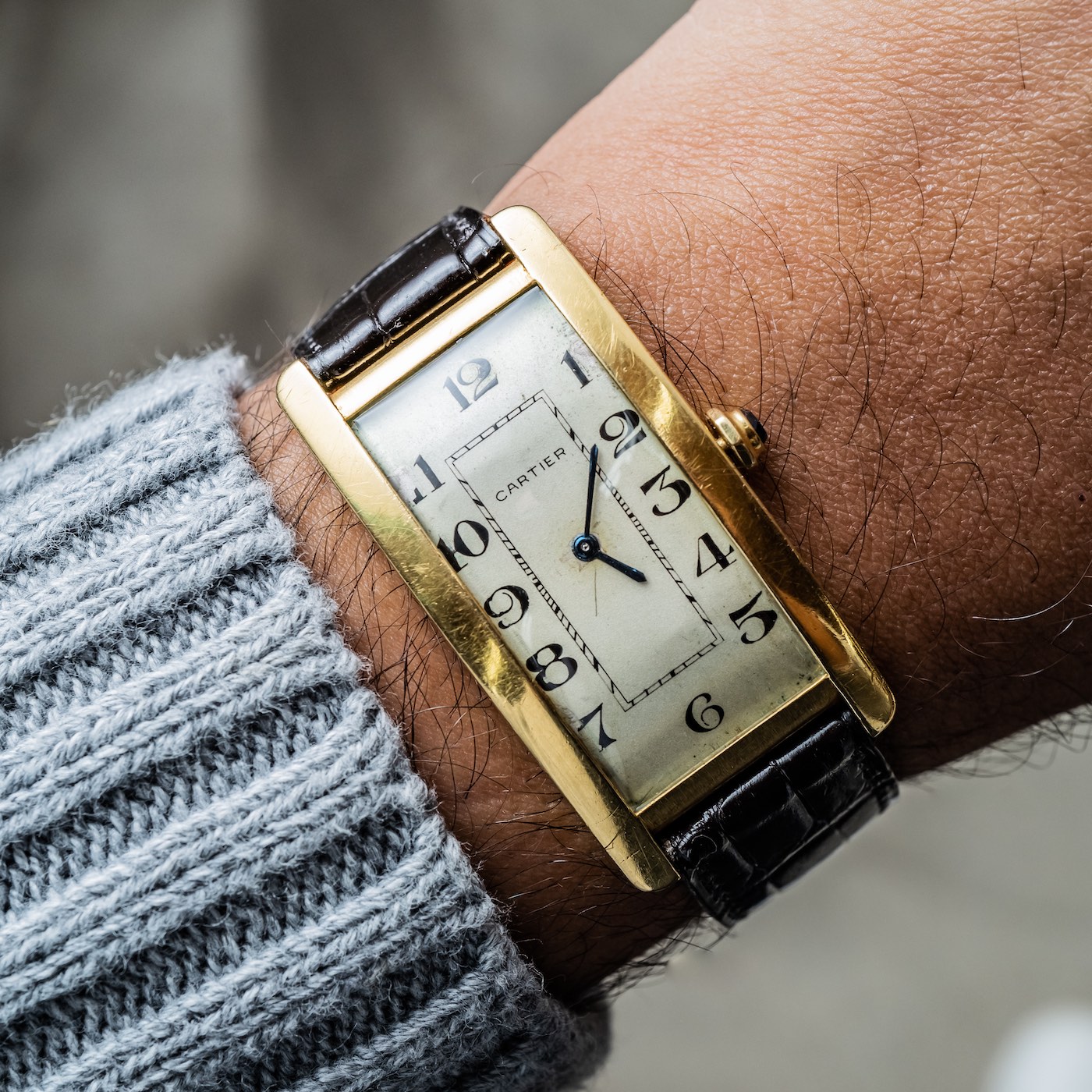 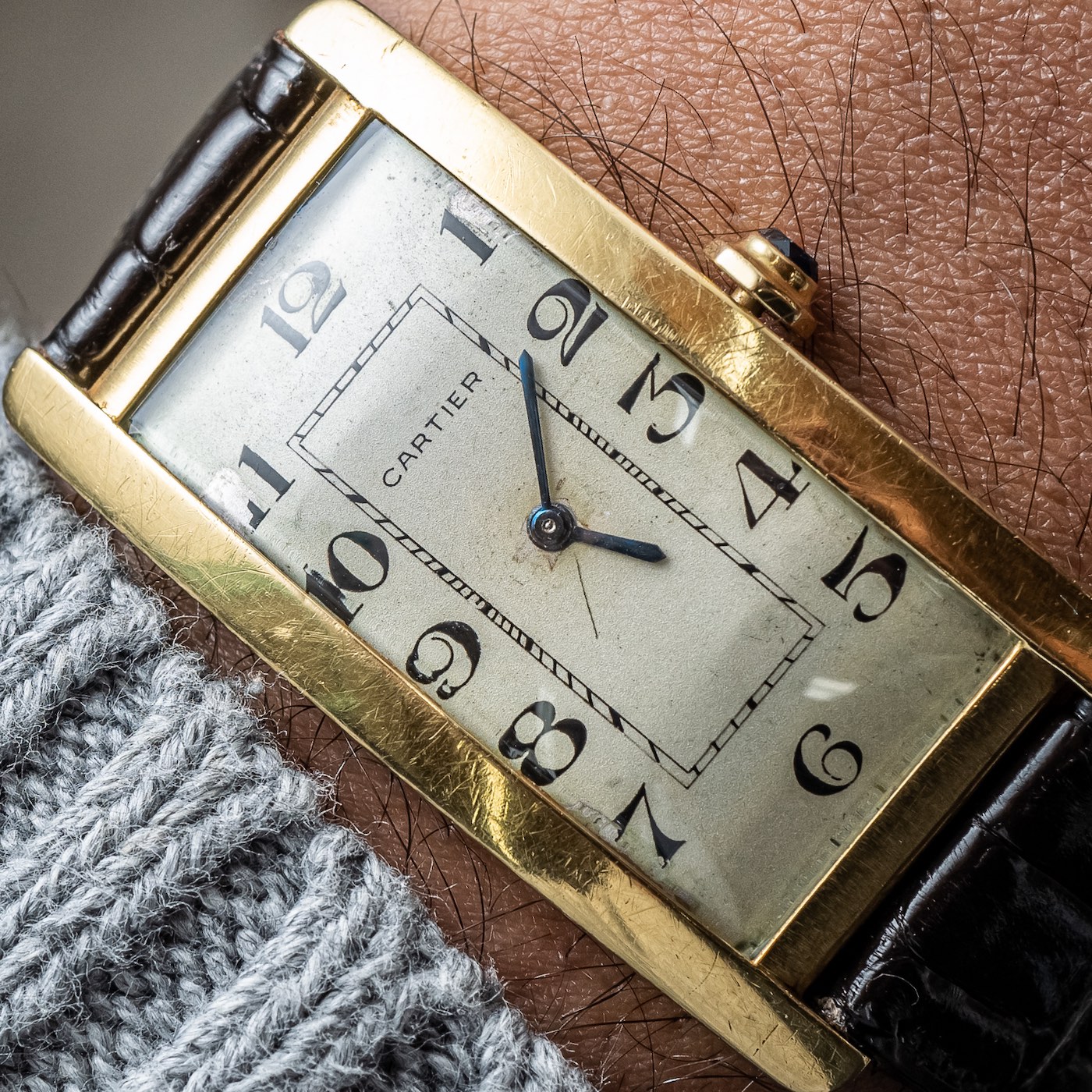 There are a handful of the elongated case Tank Cintrée pieces, including the gold-plated one worn by Steve McQueen in The Thomas Crown Affair. Even more impressive, though, is an original 1926 model that is very rare and was really a delight to try on. 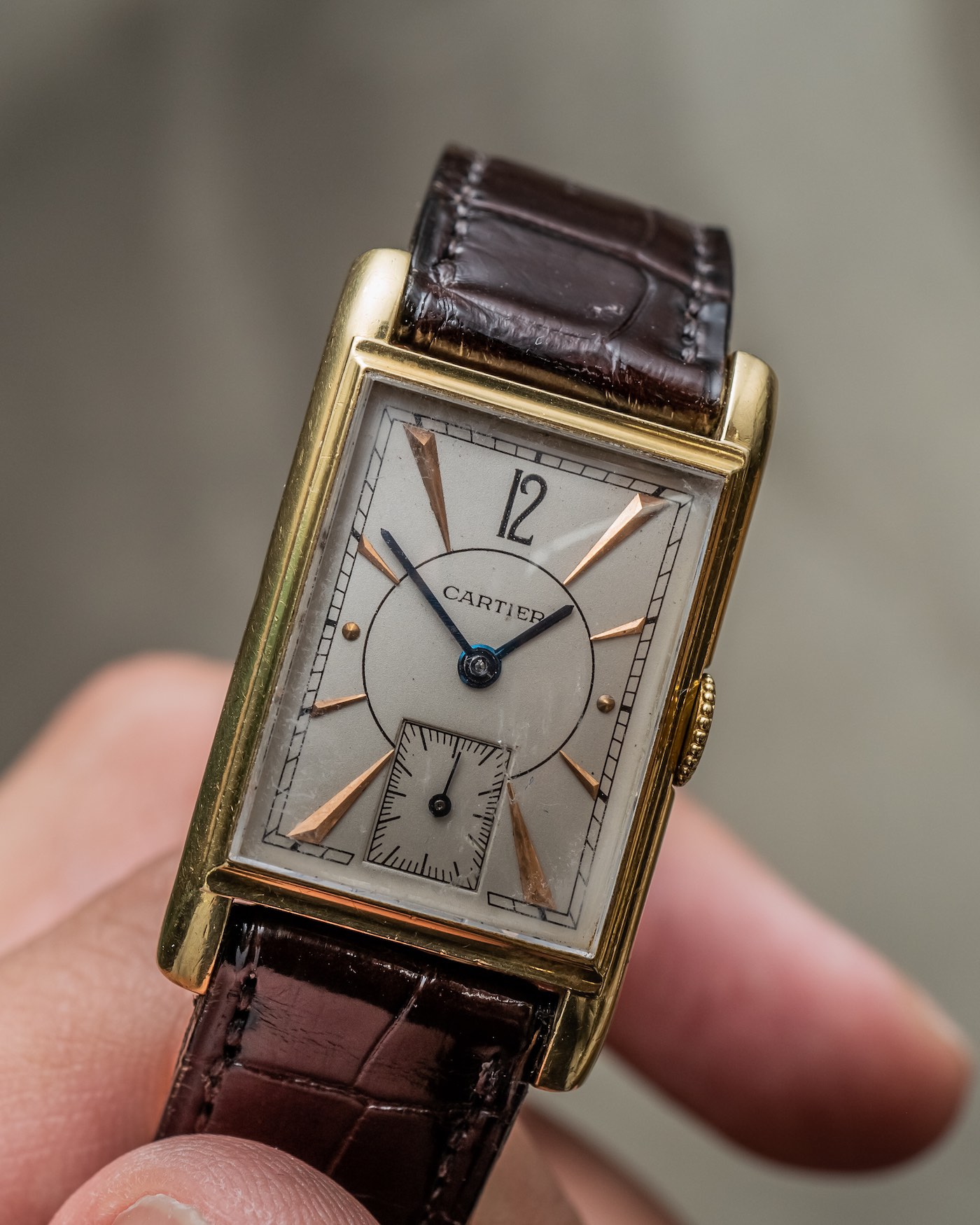 The vintage Cartier Exhibition is running at the Dover Street Market Los Angeles from now through February 19th; full details are below. You can learn more at harryfane.com and doverstreetmarket.com.