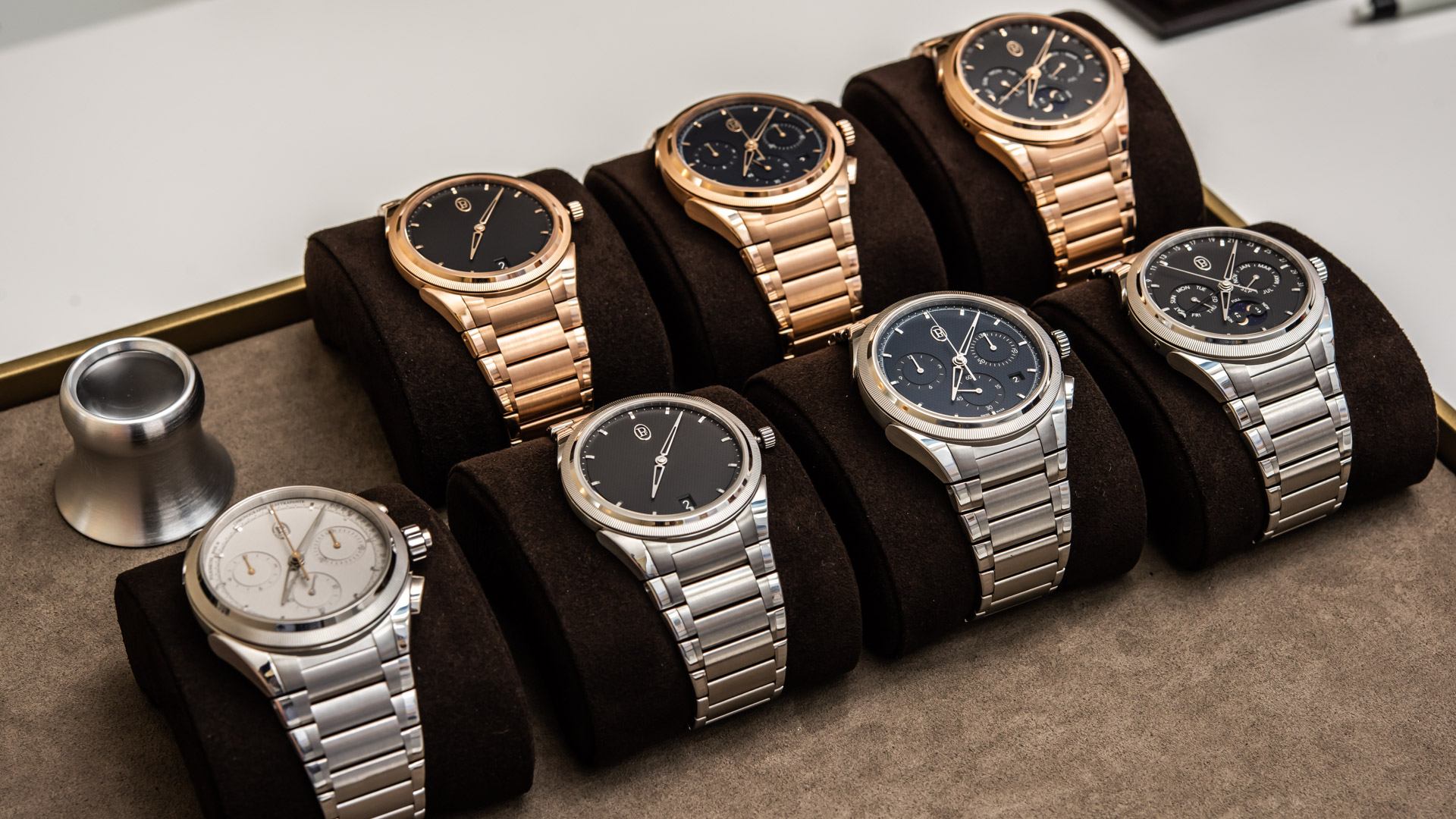 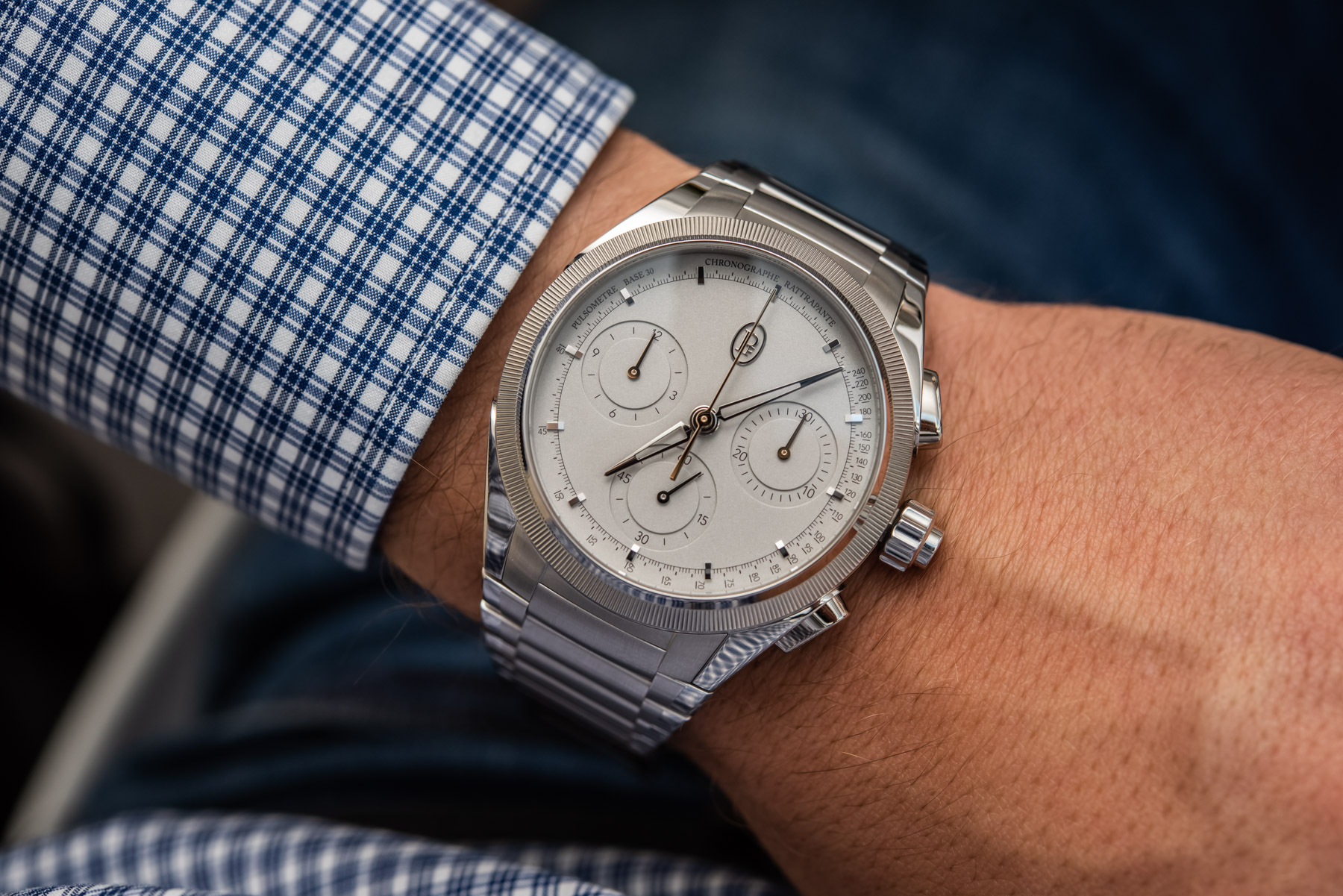 The new Parmigiani Fleurier Tonda PF collection, the next generation of the brand’s flagship Tonda line, is one of the most refreshing remakes to come along in a sea of vintage remakes. It signals a new direction for Parmigiani as it celebrates its 25th anniversary that builds on the brand’s heritage without overshadowing it. The four new models – seven if you count alternate case material options – include a two-hand automatic, a high-beat chronograph, an annual calendar, and a high-beat, split-seconds chronograph. Only the rattrapante chrono is officially limited, but the others are unlikely to be made in high production numbers since Parmigiani Fleurier makes fewer than 5,000 watches per year. The rest of its production, including output from its five factories, which make movements (Vaucher), dials, micro-components, cases, and hands, is dedicated to outside clients that include most of the top brands in Swiss watchmaking. 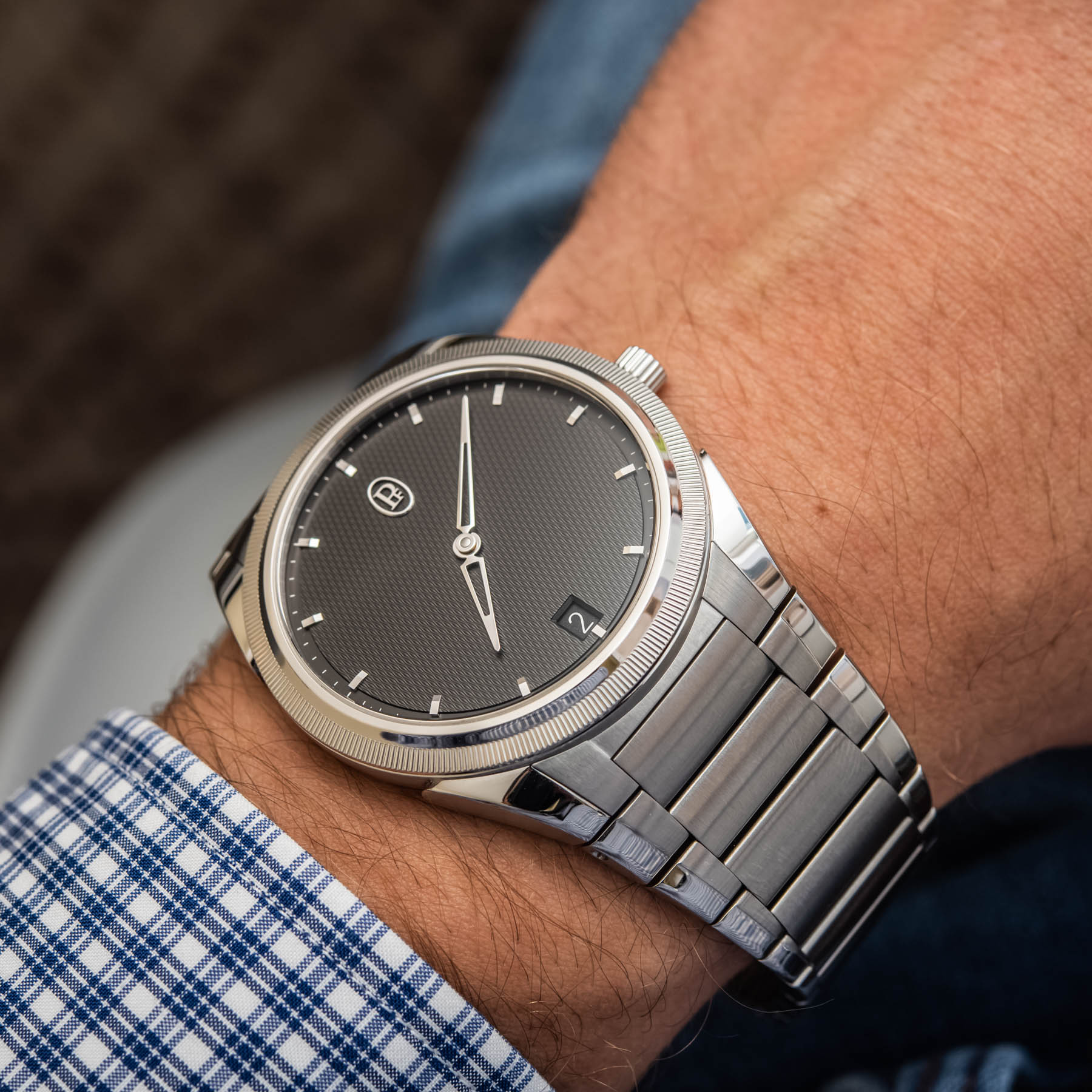 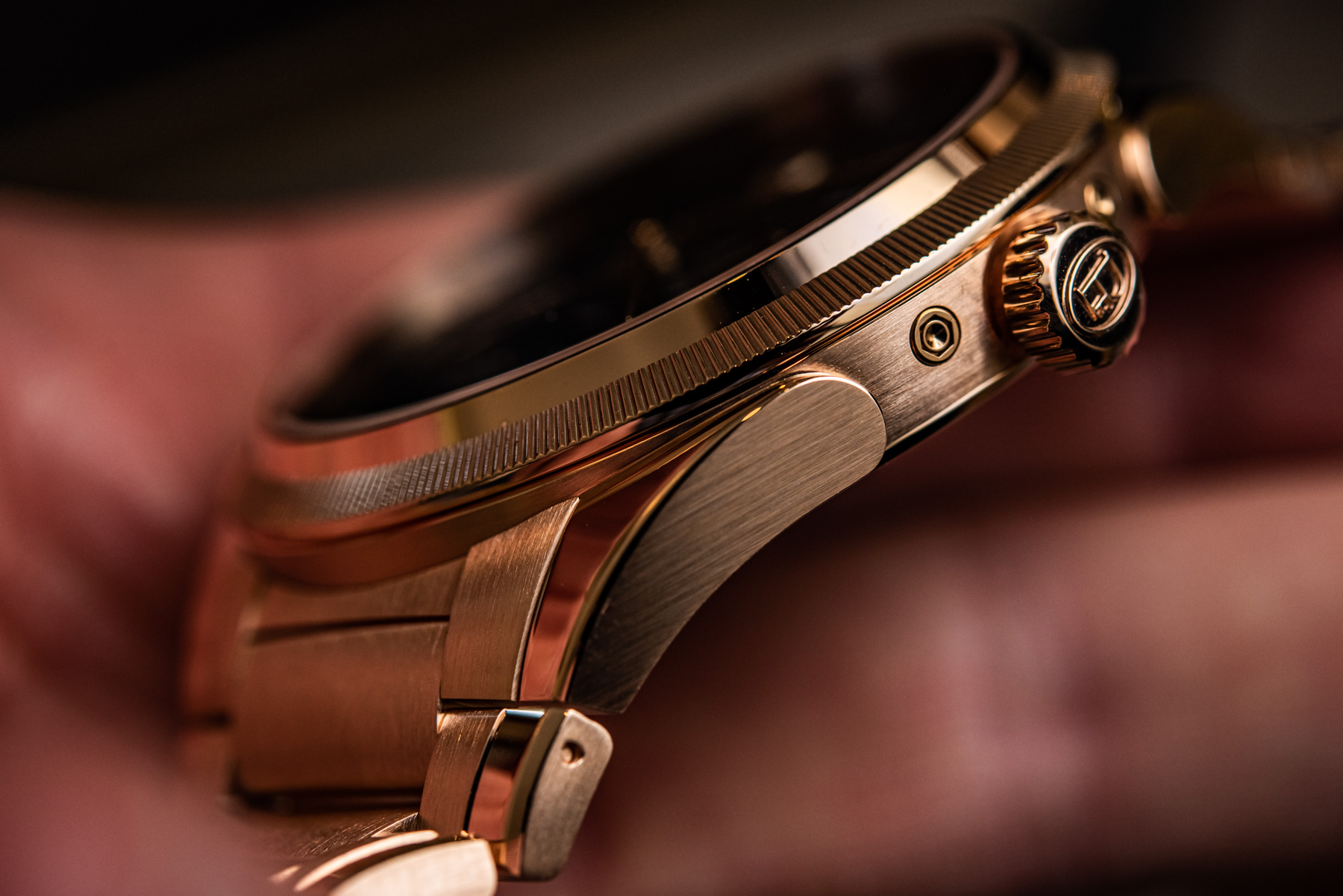 It’s worth noting that the new Tonda PF is the first collection developed under the direction of Guido Terreni, former head of watches for Bulgari and one of the originators of the Octo Finissimo line. Tonda PF is a renewal of an existing collection, rather than a new line — one that respects rather than replaces Parmigiani’s already impressive signature as a high watchmaker. All four new Tonda PFs come with bracelets that are seamlessly integrated into slightly curved cases, with chamfered and high-polished surfaces that give them a distinct dress-watch feel. 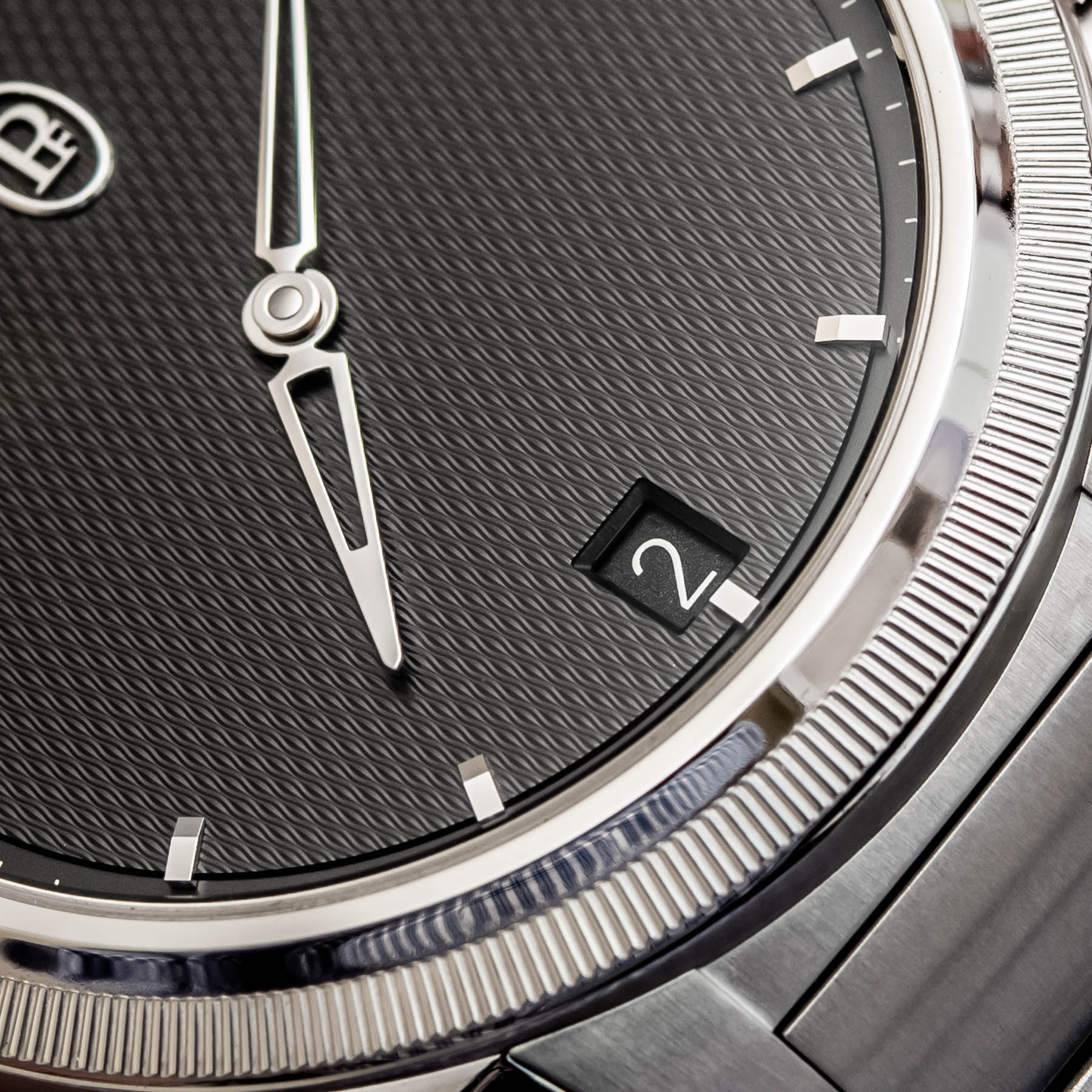 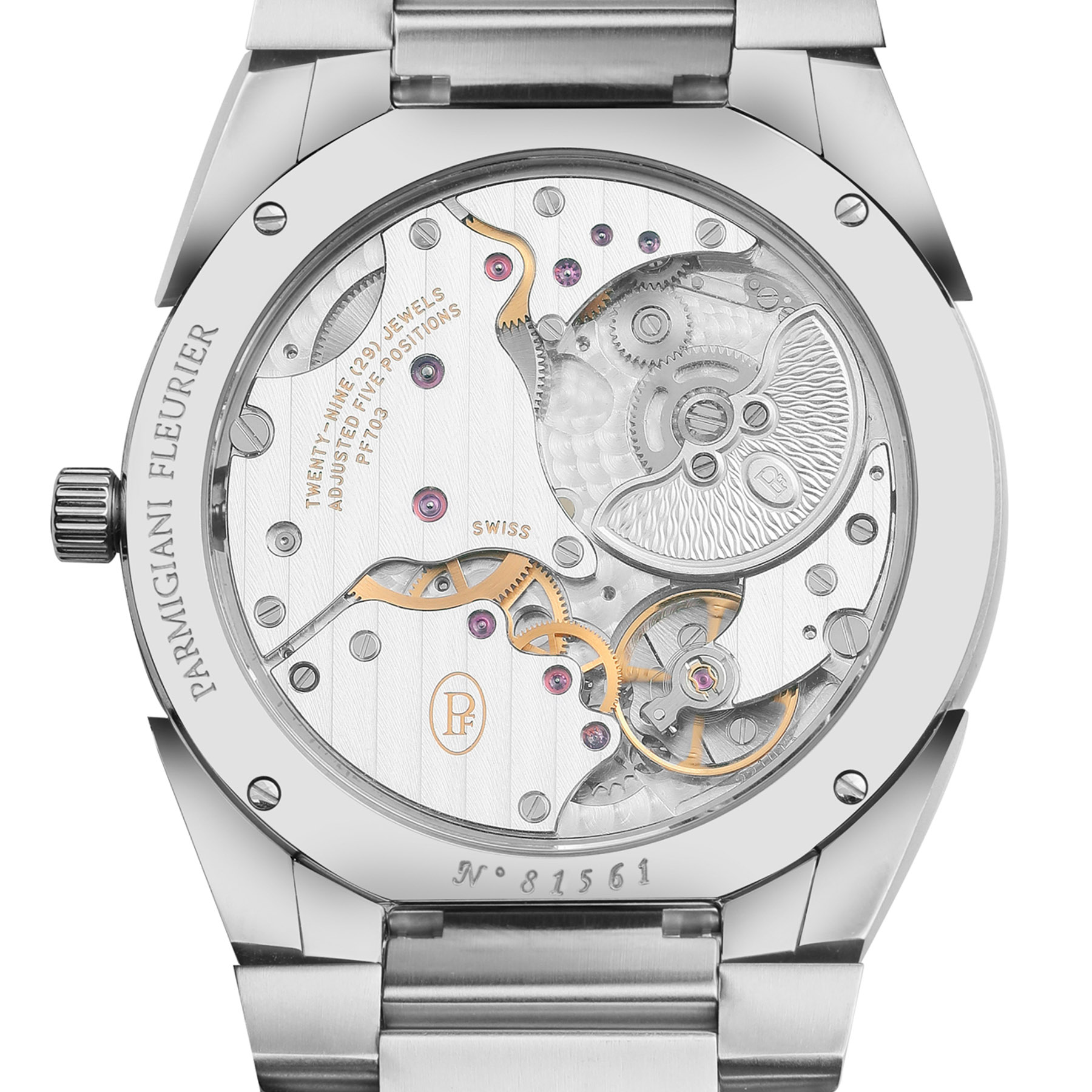 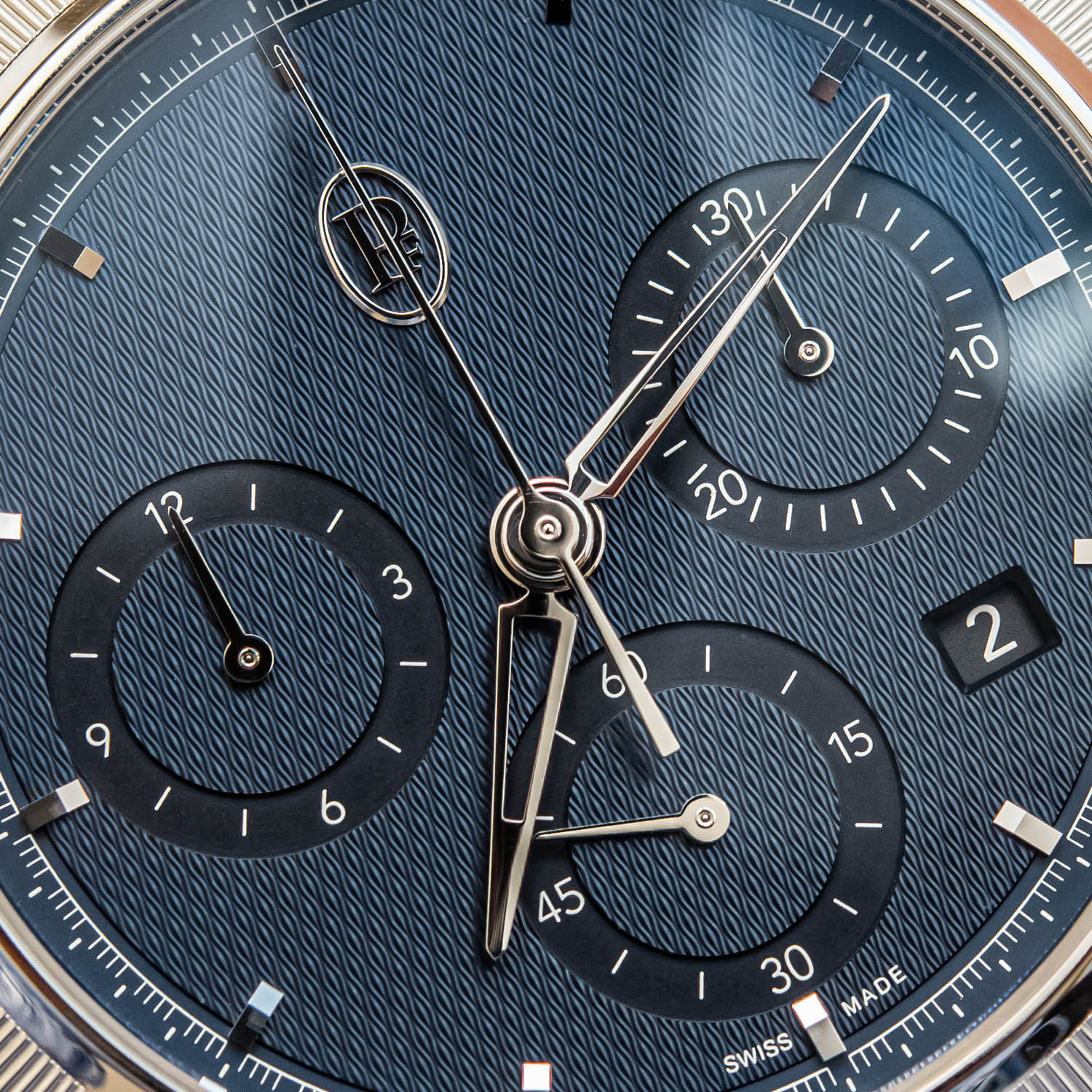 The dials are monotone and minimalist, particularly the two-hand version, with its discreet applied PF logo, and all have applied gold markers and skeletonized hands. Each has the same fluted coin edge-style bezel (made of platinum on the steel models), separated from the dial by a polished ring, and all but the split-seconds chronograph have hand-engraved Grain d’Orge (barley grain) guilloché dials, an established signature of Parmigiani’s watches. 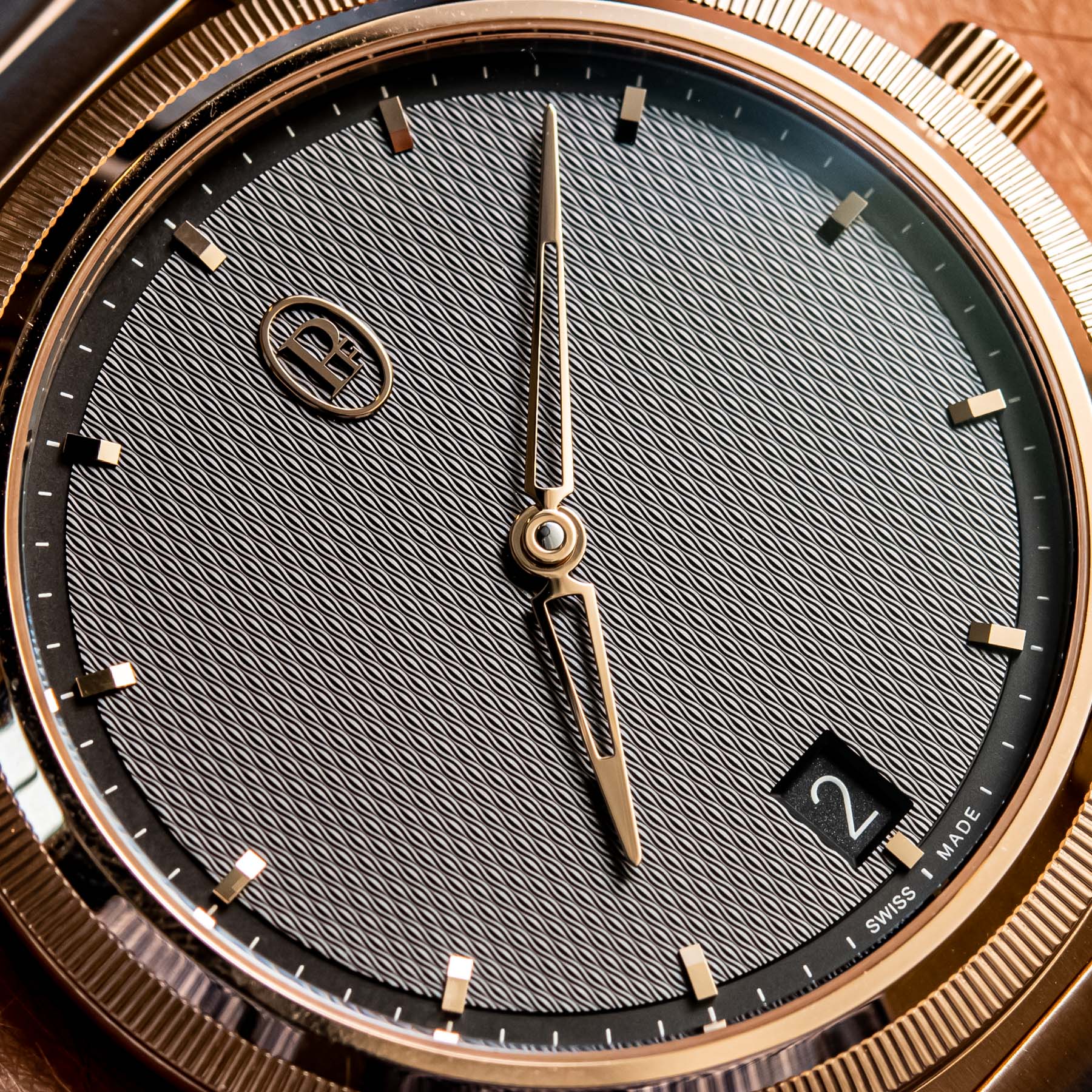 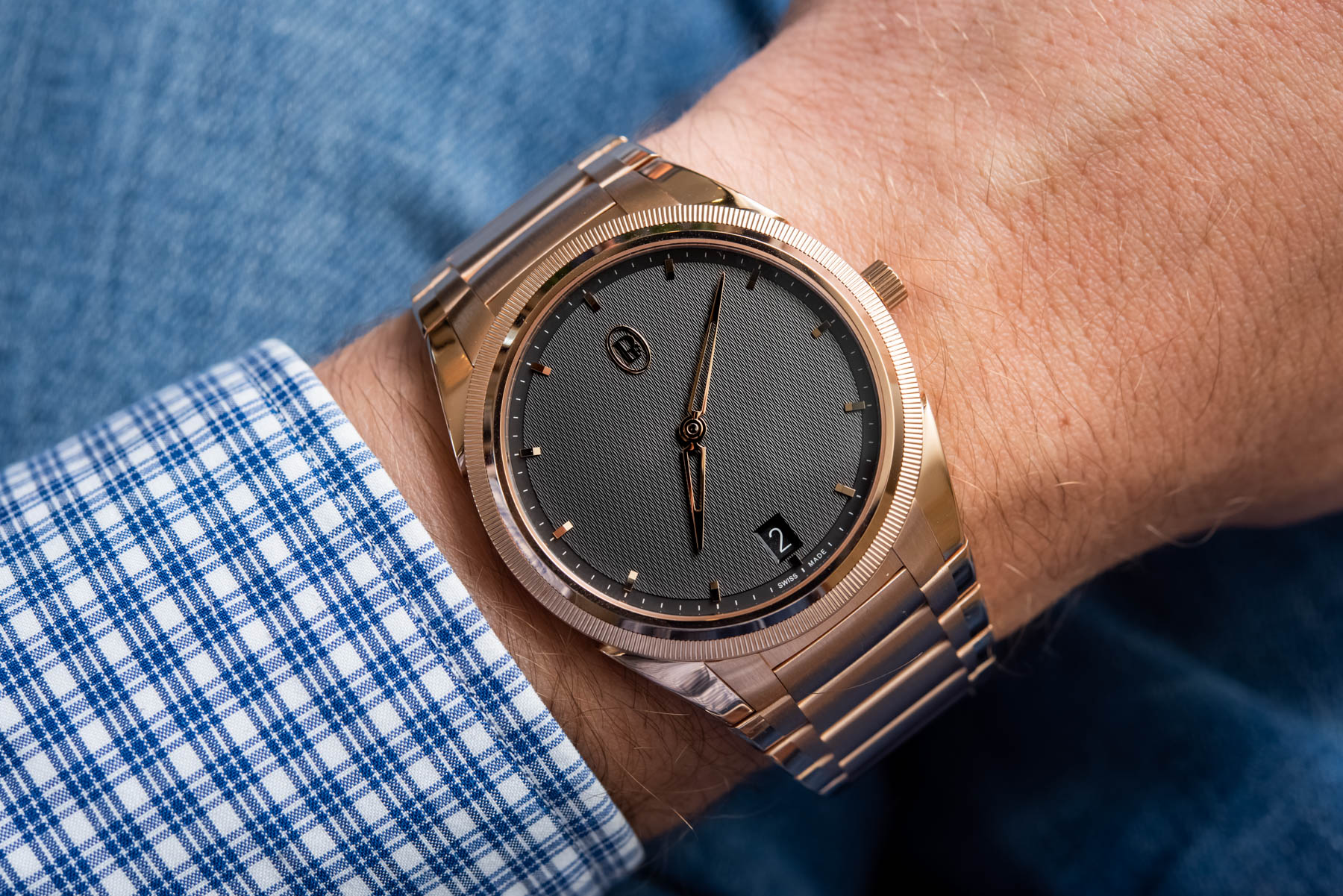 The Tonda PF Micro-Rotor is a 40mm two-hand watch with date, available in stainless steel or 18k rose gold, with a matching integrated bracelet and a warm gray-guillochéd dial. The movement is an updated Parmigiani caliber PF703, with the platinum micro-rotor newly integrated inside the movement. The result is a slim watch that is only 7.8mm-thick. It is priced at $22,900 in steel and $53,900 in gold. 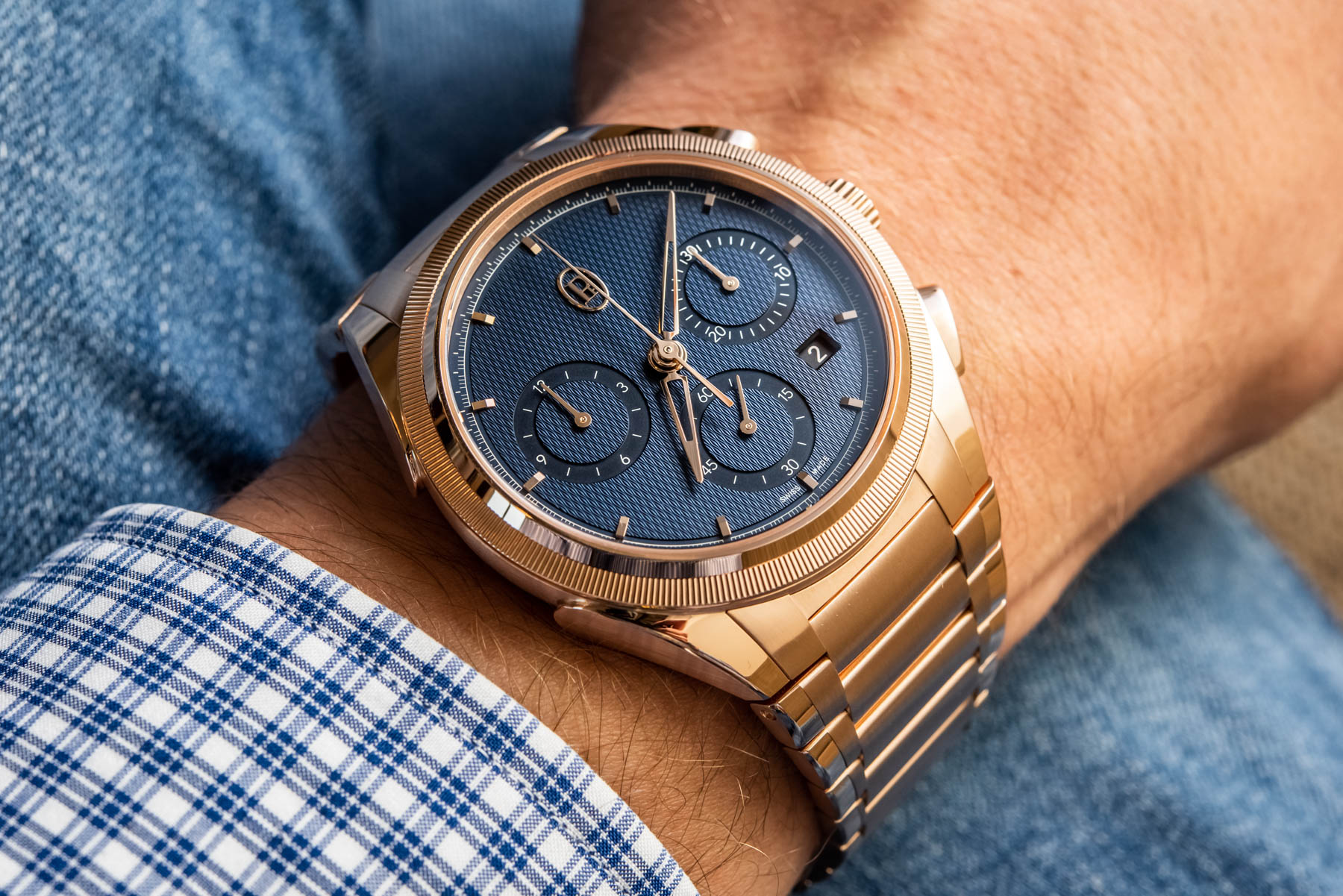 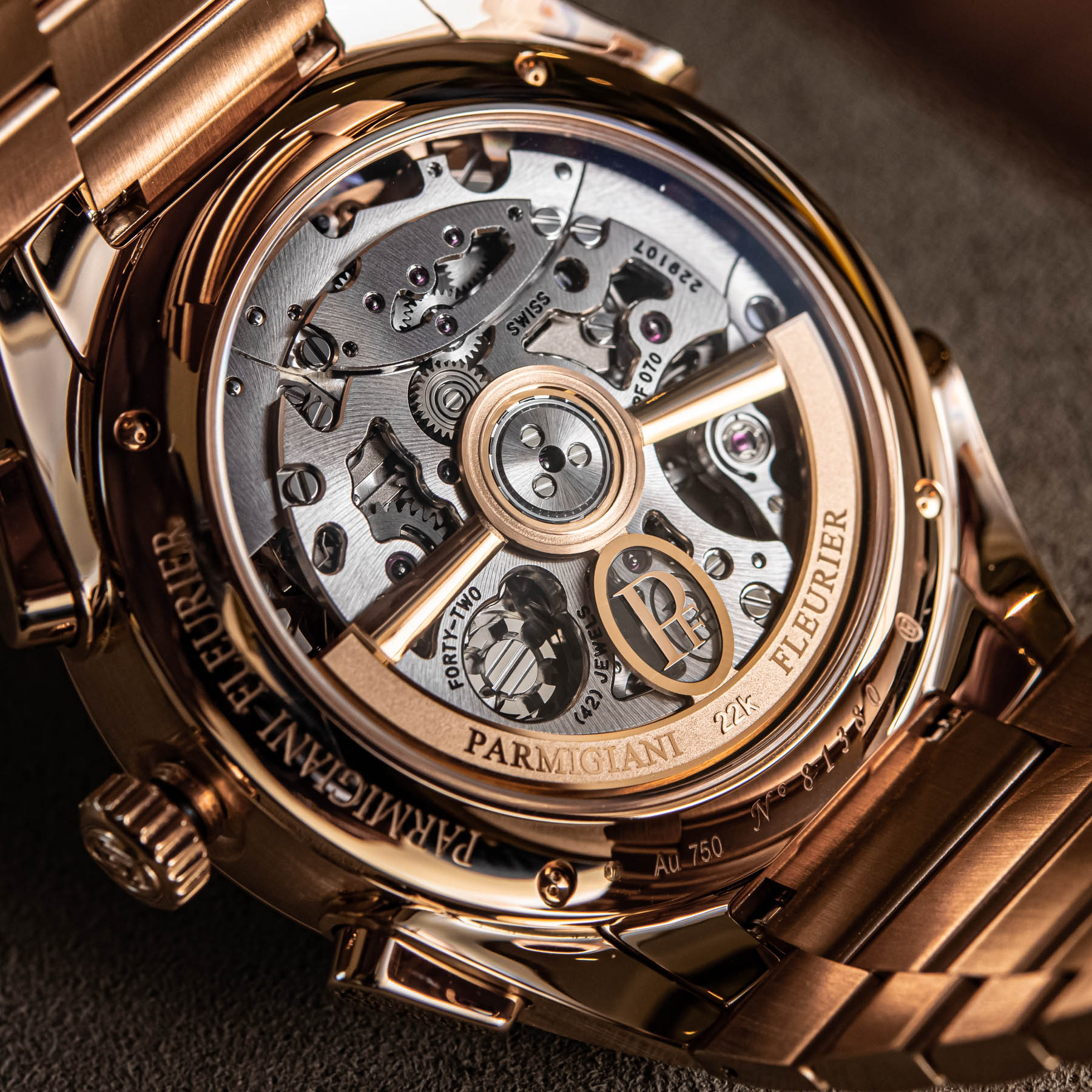 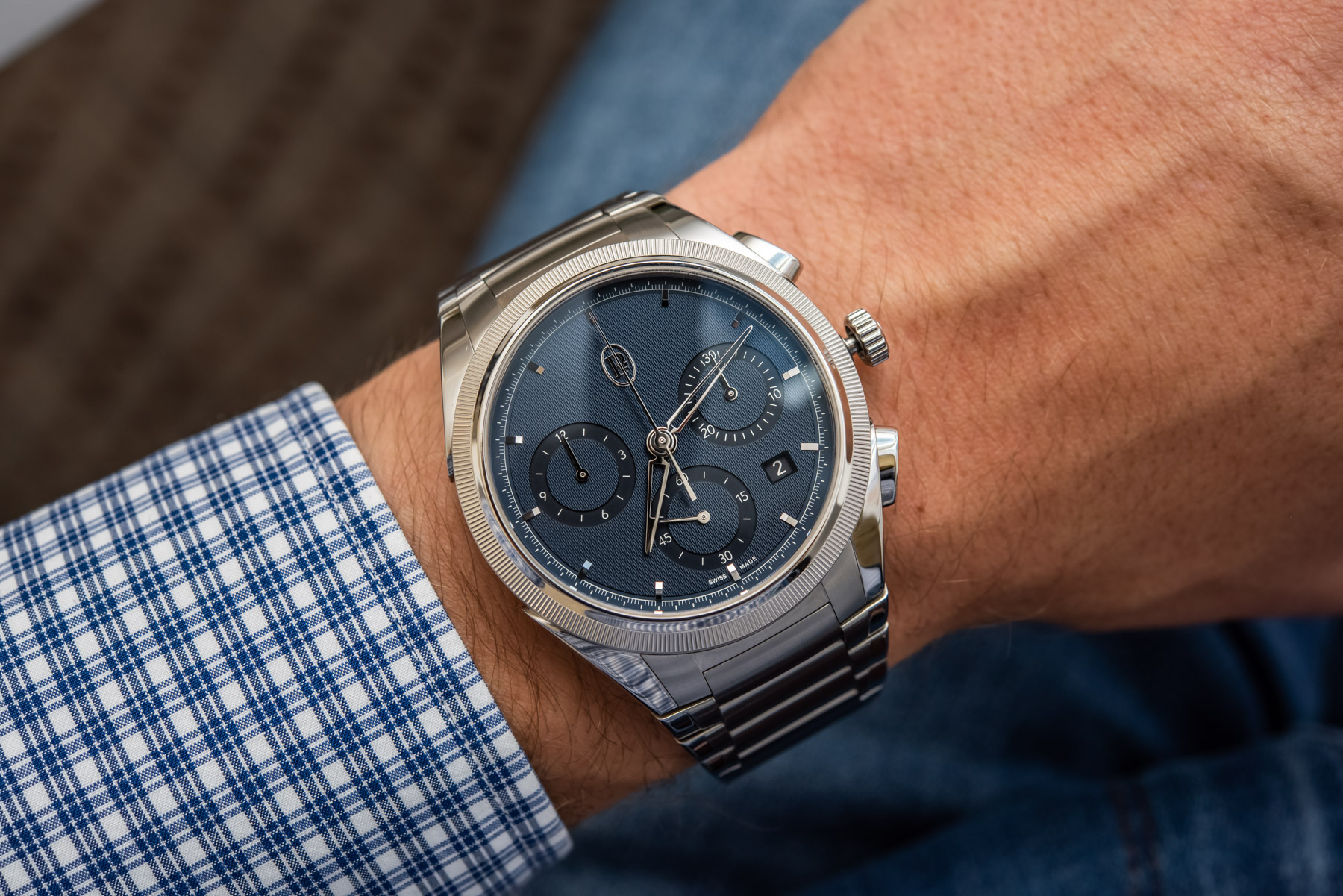 The 42mm Tonda PF Chronograph is a sports watch packaged in dress watch habillage, unlike most high-frequency chronos, which tend to be designed in bold racing colors with new-age materials. It contains a high-beat (36,000 vph) column-wheel chronograph movement, caliber PF070, with a new openworked central rotor in 22k rose gold (which can be seen through the sapphire caseback). It comes in stainless steel and 18k rose gold options, with rich dark blue guilloché dials and tone-on-tone subdials, all on an almost completely flush surface. It is priced at $31,000 in steel and $69,700 in gold. 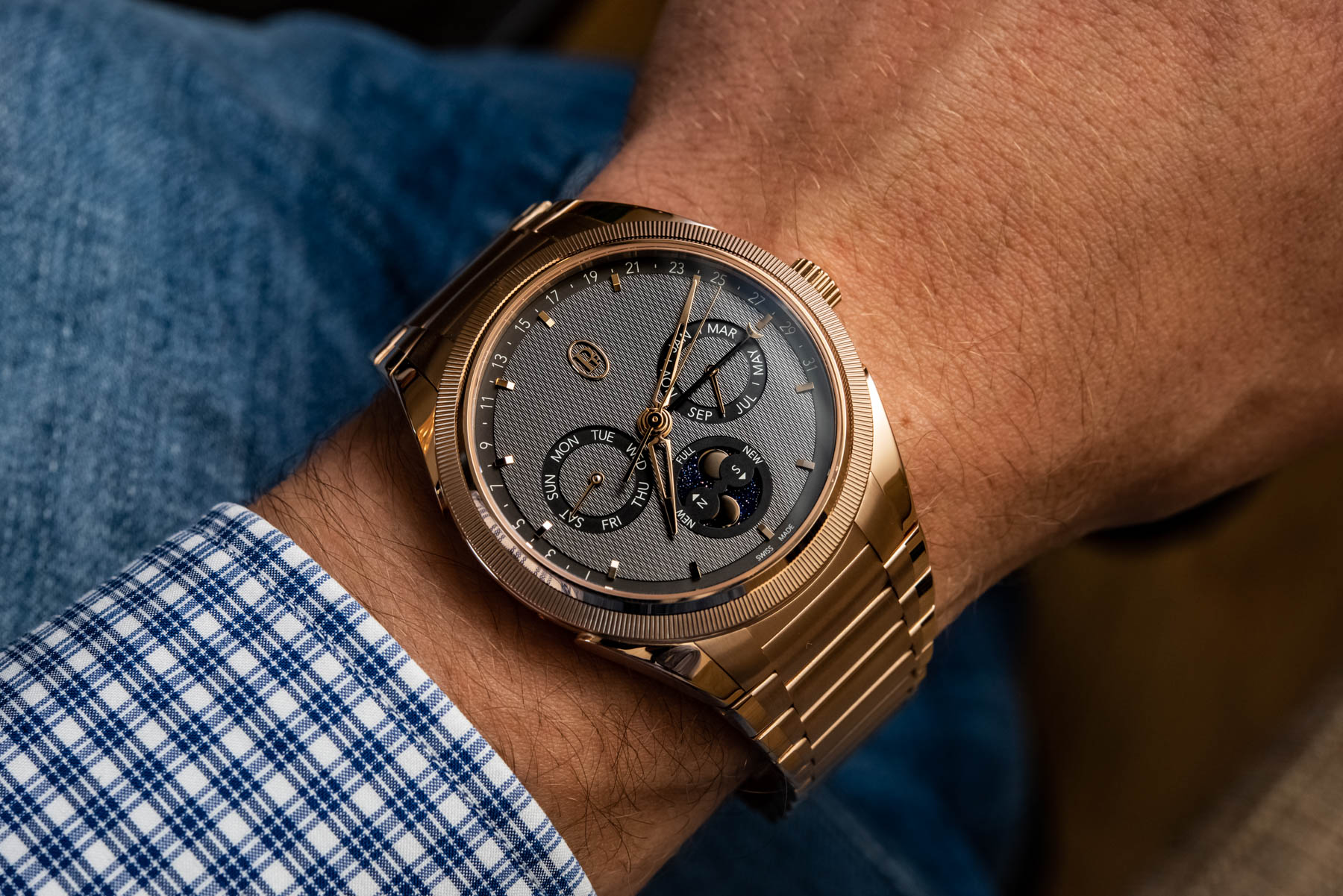 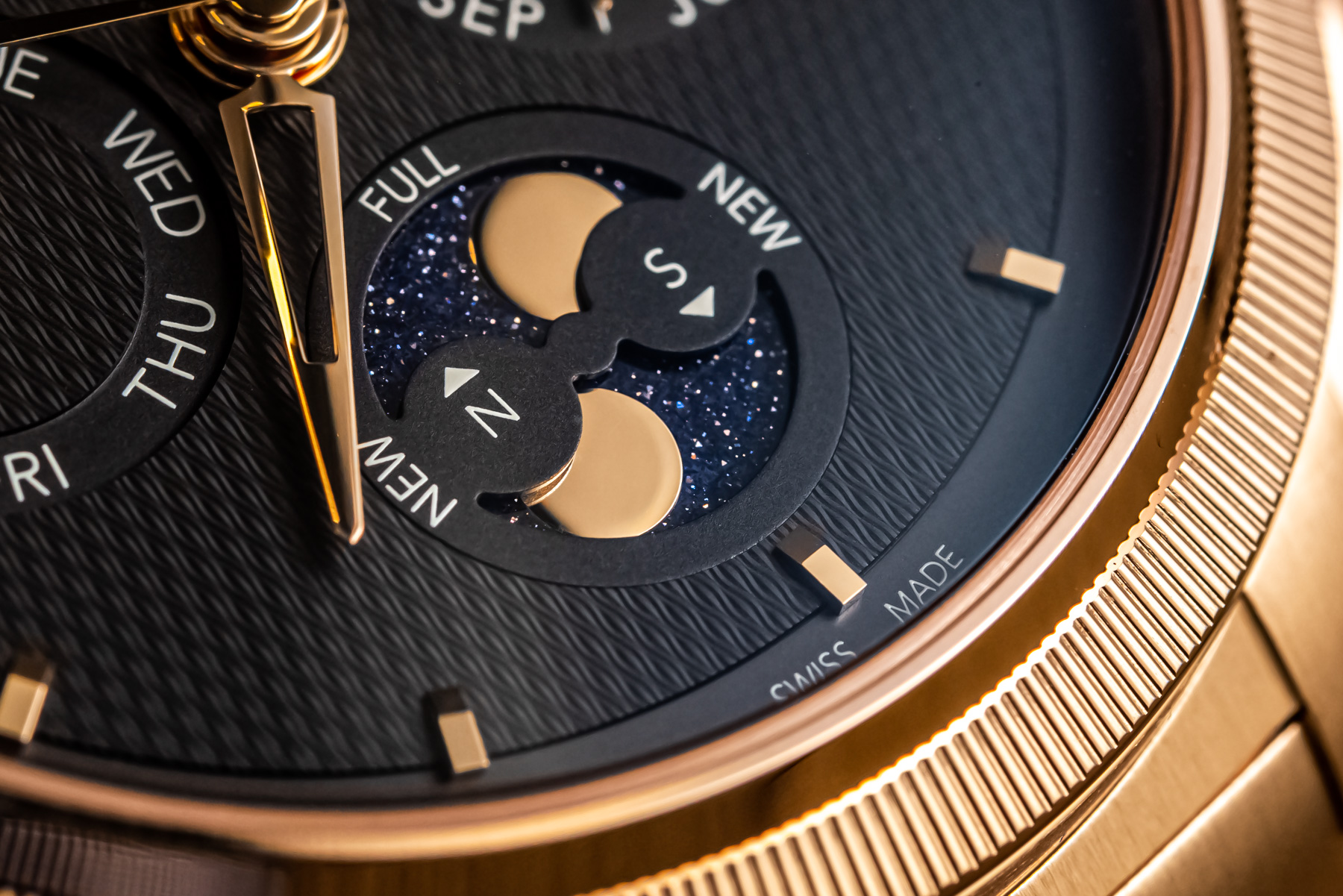 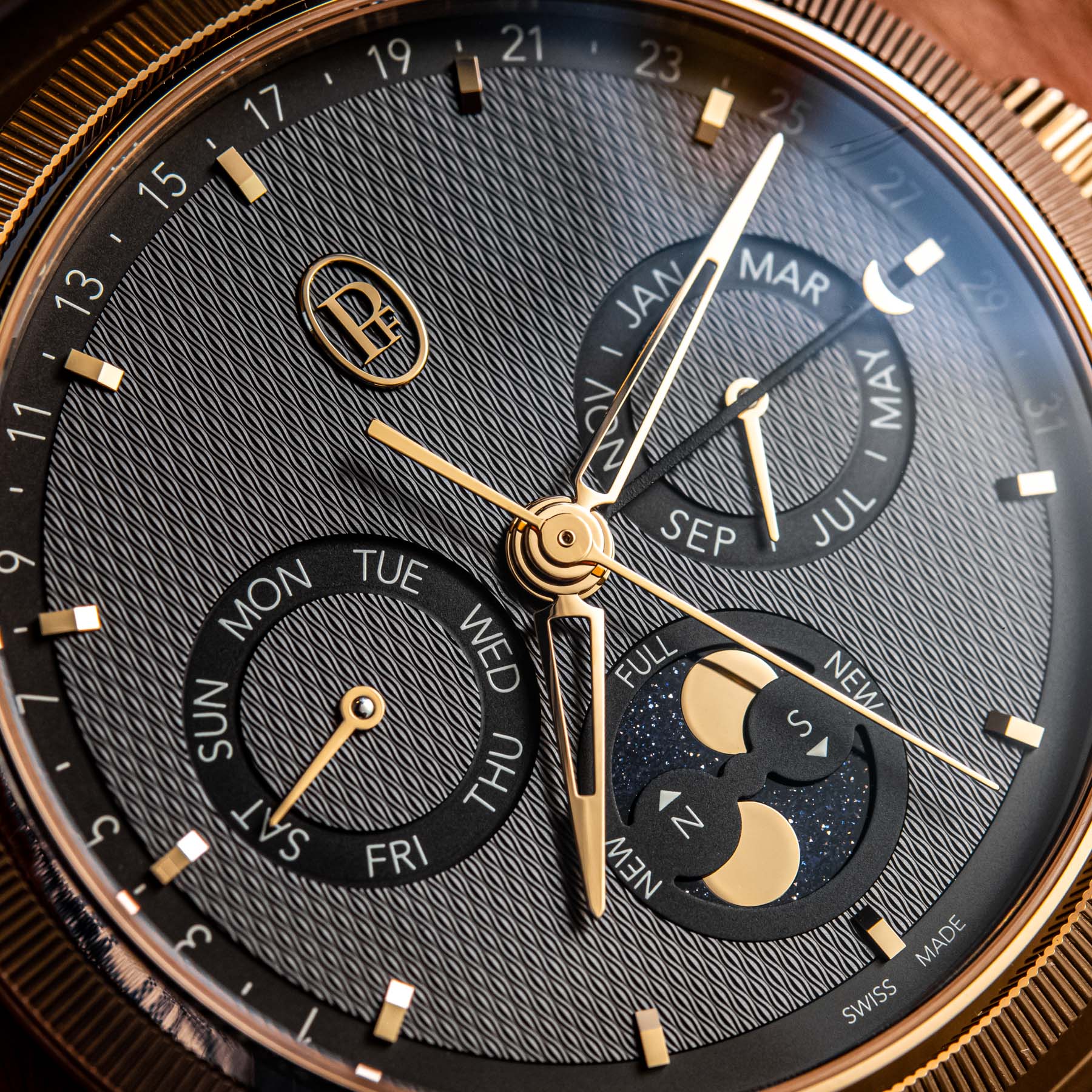 The Tonda PF Annual Calendar is an update of the brand’s signature calendar complication. It has a retrograde date on the outer minute track and a 122-year moonphase indicator that tracks phases in both hemispheres. It is also available in steel and rose gold, with a warm gray dial. It is priced at $38,700 in steel and $77,500 in gold. 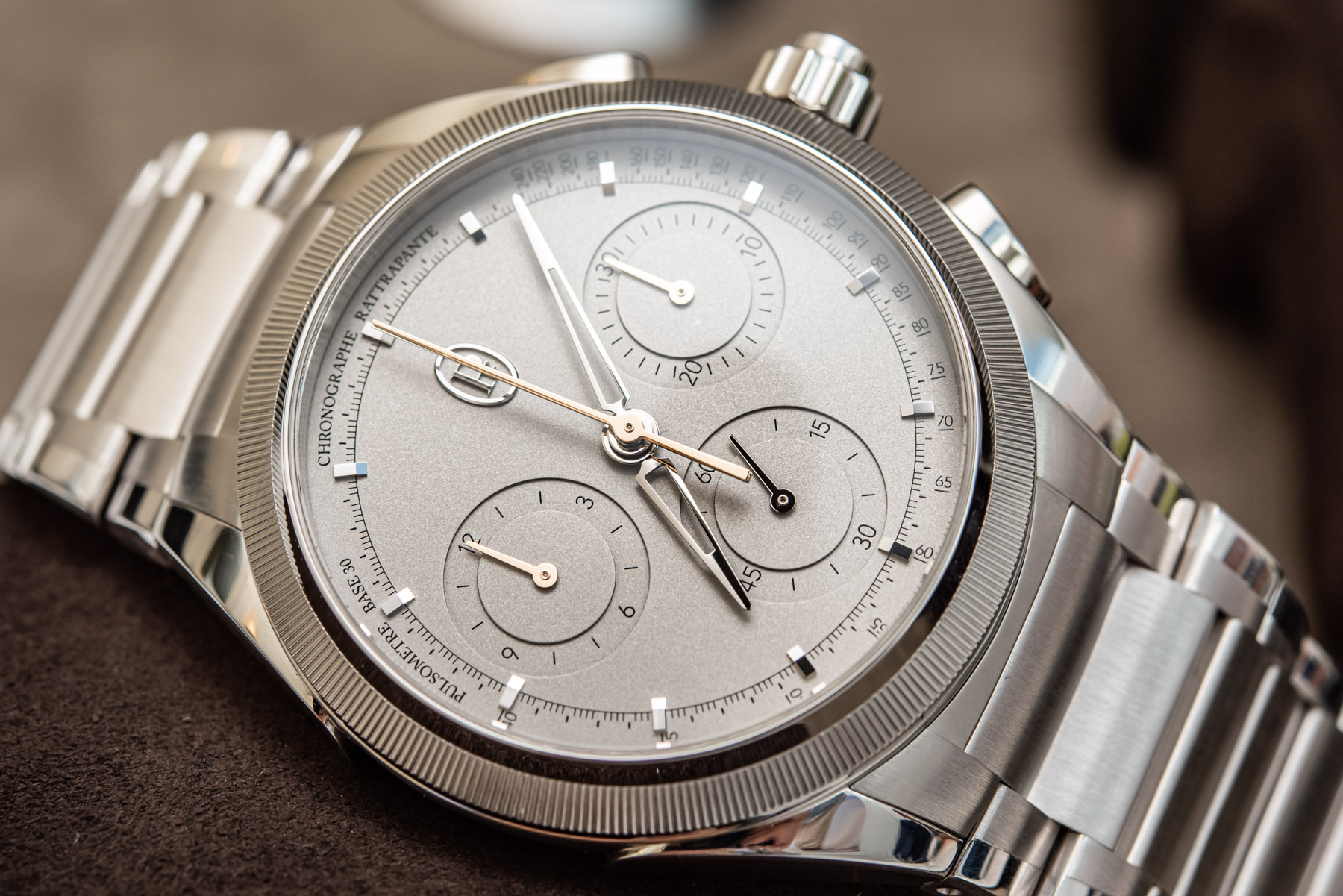 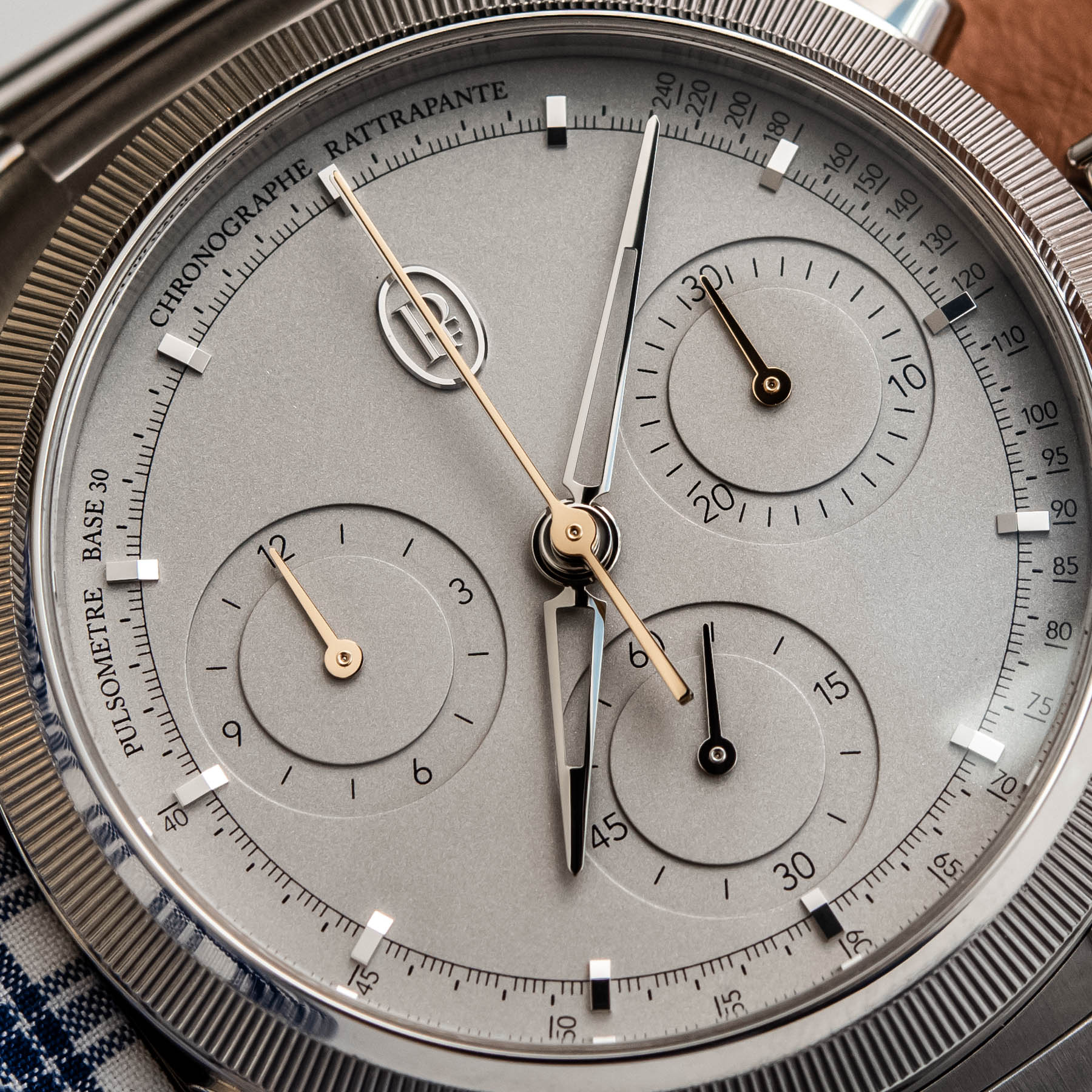 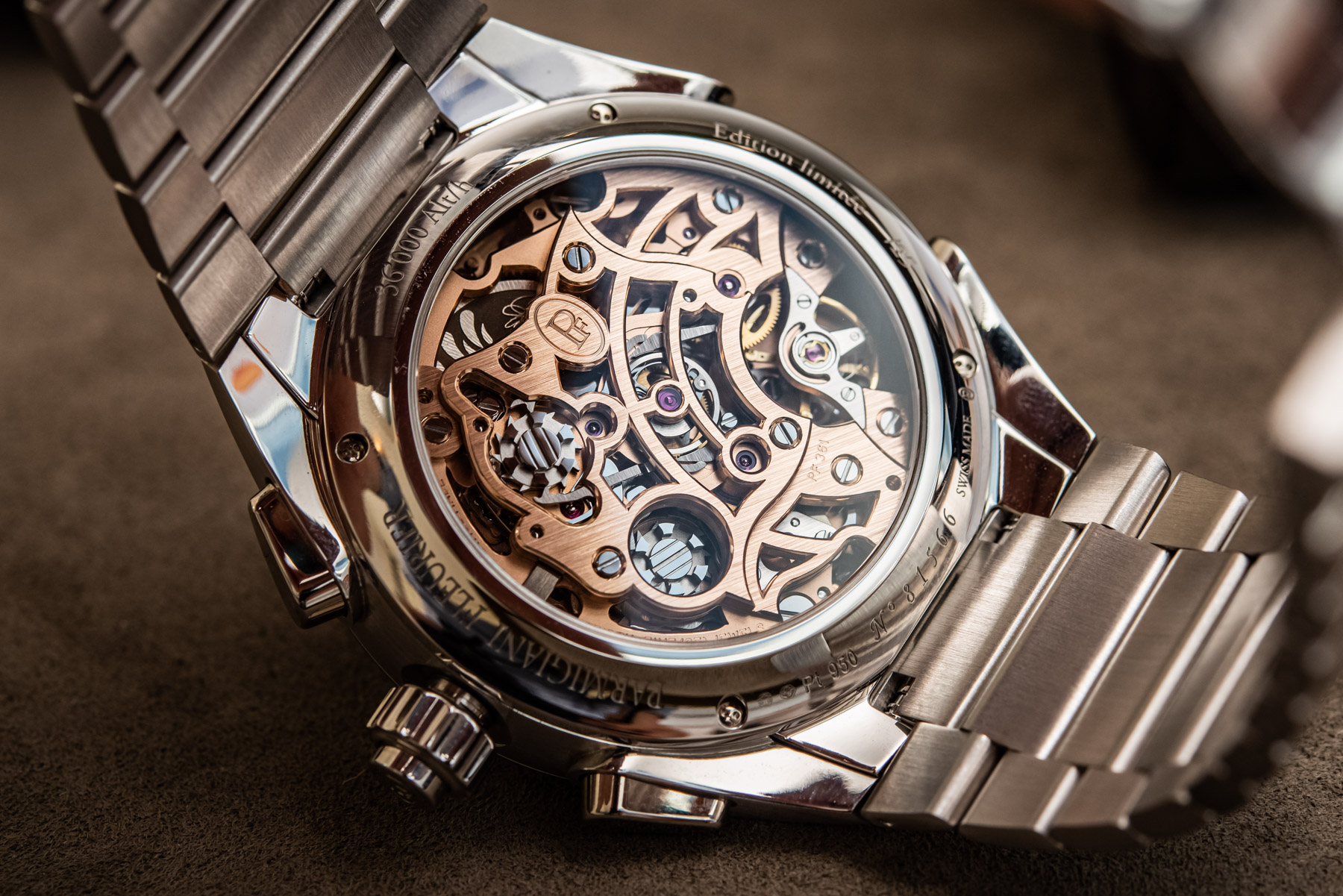 The 25th anniversary Tonda PF Split Seconds Chronograph, a limited edition of 25 watches, is solid platinum, including the dial, which is given a sandblasted finish. The main plate and bridges are 18k rose gold, and beautifully open-worked in an intricate, curving architecture with a high satin-finish and polished bevels that make it fancy without being overly decorative. The caliber PF361, running at a high frequency of 36,000 vph, is a new version of the manufacture’s most high-end caliber, the GPHG-awarded Chronor. It is priced at $171,600. 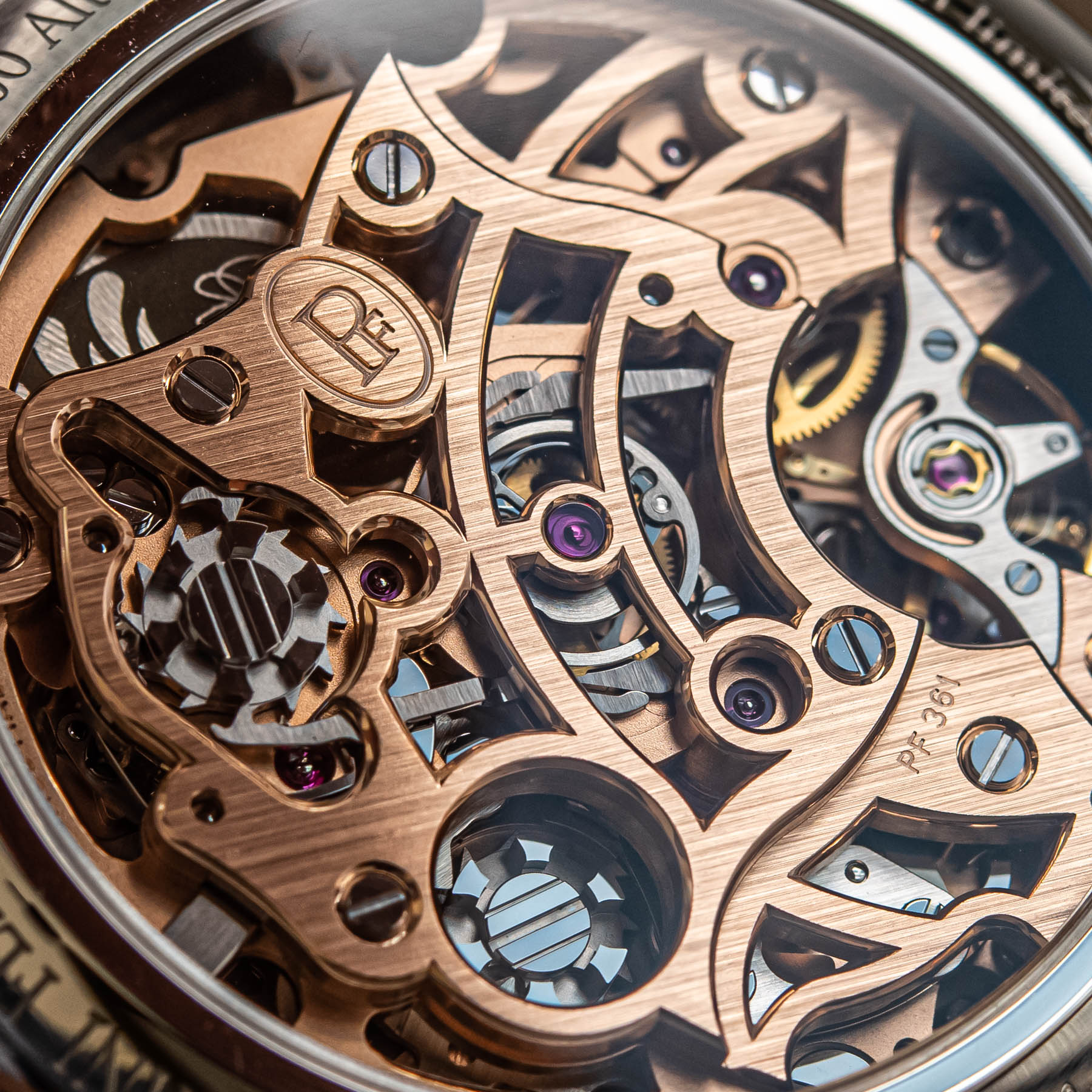 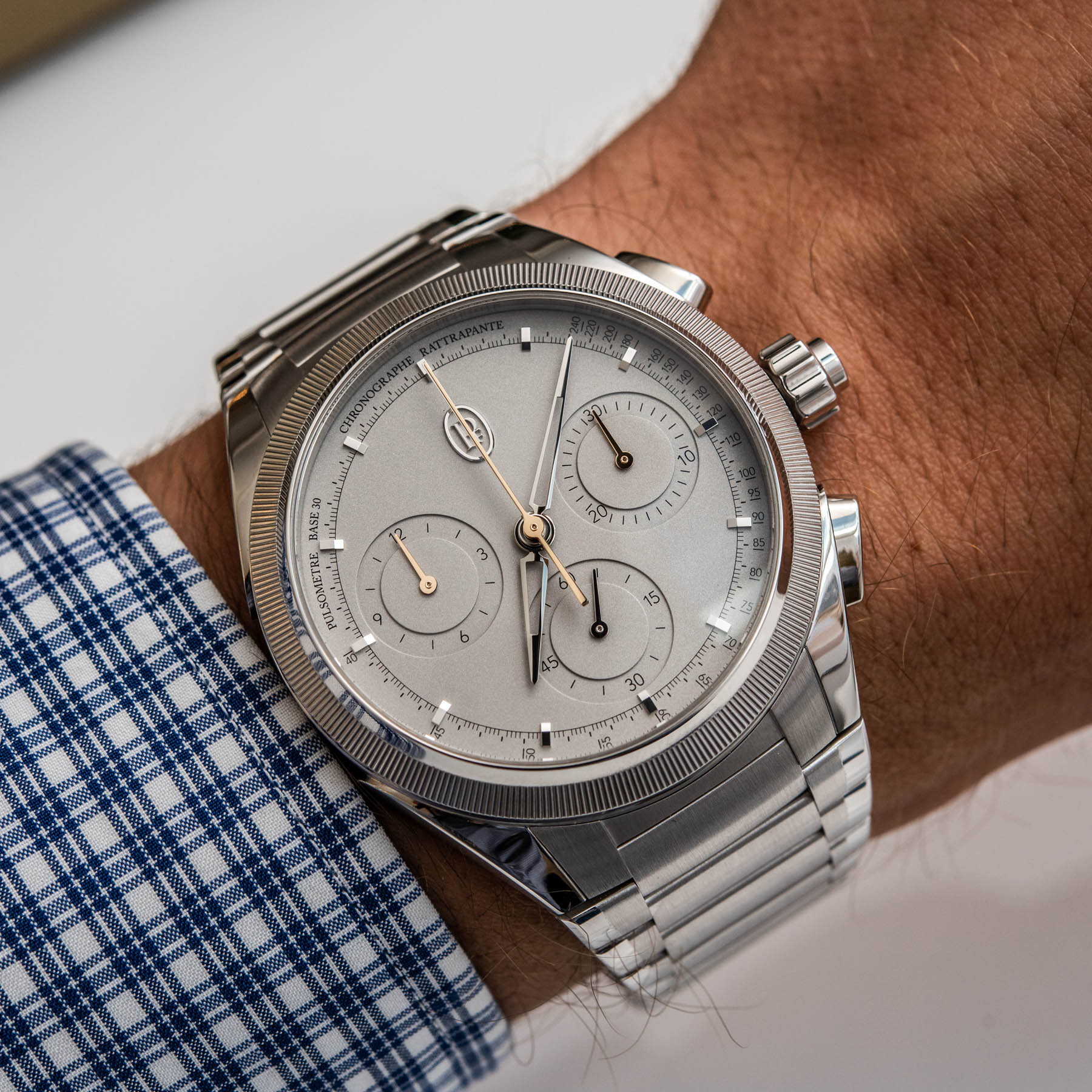 This new collection is the best reflection yet of Parmigiani Fleurier’s ability to combine high watchmaking with scaled production geared to everyday wear. Prior to starting his own brand, Michel Parmigiani earned a reputation as a highly skilled restoration expert, working not just on high-end watches but on automata, which requires expertise in a wide range of crafts. The result is a watchmaking style that incorporates a rigorous attention to detail that can be seen everywhere on these watches: the platinum bezel on the steel watches for extra toughness (instead of, for example, ceramic) and because it takes a higher polish; the solid-gold movement components and integrated micro-rotors to make them slimmer; the bassiné-shaped cases for a better fit (wider near the bezel and narrower on the wrist); the tiny, polished gold markers and skeletonized hands that allow the dial’s guilloché to remain the star of the show.

“Michel doesn’t want to make anything that can’t be restored in 100 years,” says Gustavo Calzadilla, president of Parmigiani Fleurier for the Americas. “The mindset of the master restorer is to be invisible, to respect the watchmaker who made it. On the other side, as a watchmaker, he has created a signature design that is identifiable as Parmigiani Fleurier.”  The philosophy has obviously been applied to the new Tonda PF collection, which CEO Guido Terreni characterizes historically: “In the last 25 years, Parmigiani Fleurier has been able to create mechanical art at the highest level, thanks to the unique mastery of Michel Parmigiani. We intend to transmit this powerful heritage to the watchmaking purists of tomorrow.” You can learn more at parmigiani.com.