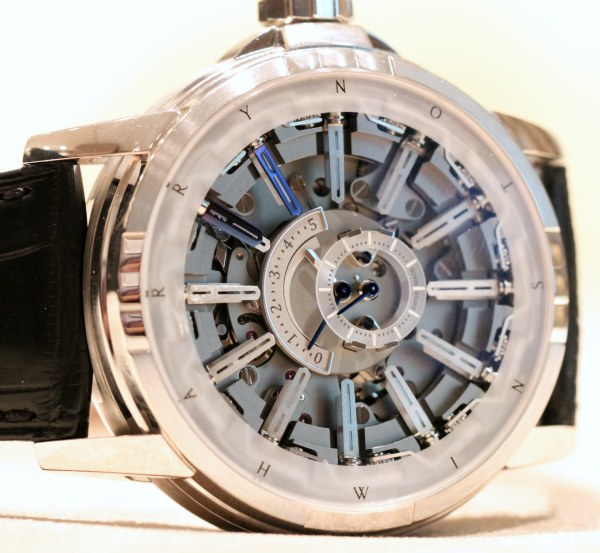 Looking forward to the next Harry Winston Opus watch is becoming an annual tradition. For 2012 Harry Winston releases the new Opus 12 watch which was made in collaboration with watch maker Emmanuel Bouchet. You can check out coverage of last year’s extremely popular Opus XI model here. At a glance the Opus 12 is a rather conservative model being in a round case, but checking out the dial more carefully reveals just how complex this watch is.

Bouchet is a seasoned watch maker but actually some one that I had not heard of before I interviewed him about the Opus 12. Harry Winston usually likes to work with super star watch makers that most people don’t know about. Bouchet is a perfect example and is known to be an expert on things like minute repeaters. The Opus 12 is not that, but it does represent something that Bouchet has been wanting to build for many years. That being this particularly novel way of telling the time. 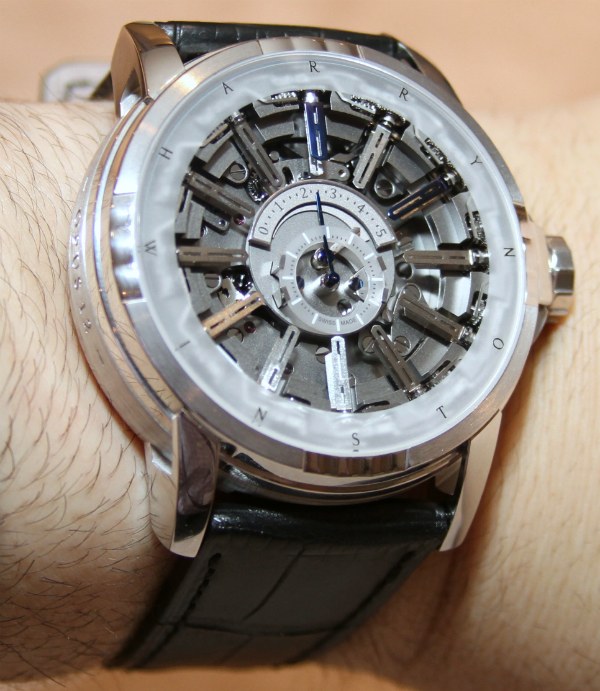 The Opus 12 uses peripherally aligned hands to tell the time from the outside in. This uses hands that spin around to reveal active indicators. Watching the two videos will help explain more about what this watch is all about. In essence, you have a shorter blued hour hands that spins around to reveal itself, as well as a similar minutes hand. Looking at the two hands tells you the time to the closest five minute indicator.

After the passing of each hour the entire dial becomes animated while the hour indicators all spin one one after another until the new hour is reached. It is a cool and totally impractical complication that you’ll love to watch. According to Harry Winston, the production of the tiny gears that make this feature work were the most technically challenging to produce. In the center of the dial you have three more features. First is a subsidiary seconds dial. Then there is a retrograde five minute indicator. It is cool to see them both visually move together. The retrograde minutes indicator is used to tell the time more precisely because the main minute hands only goes in five minute increments. There is also a power reserve indicator for the manually would movements that has 45 hours of power reserve. 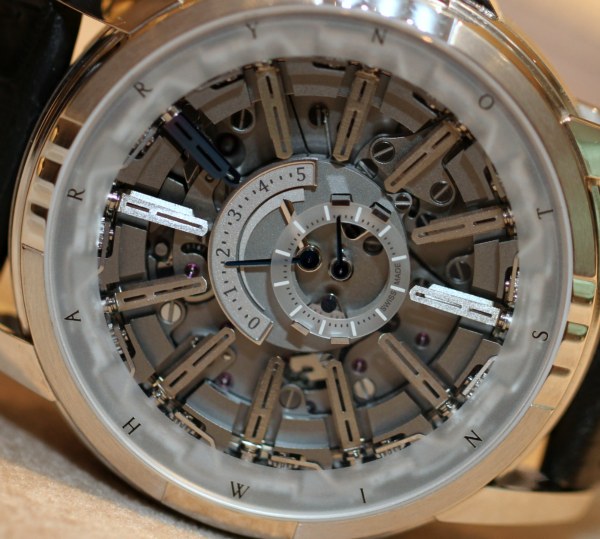 Playing with the watch is endlessly fun, and reading it with precision is quite possible. The dial of course is an interesting mesh work of mechanics. Harry Winston chose to go with an interesting and almost industrial style of finishing for the movement on the front of the watch. It almost looks like something in an Hublot watch, and offers a youthful and fresh look to the watch that is not stuffy in demeanor.

On the rear of the watch is more classic finishing and another view of the manually-wound movement. The caseback is not super exciting, but nonetheless nice. What you can’t see is just how complex the movement it. In it are over 600 parts and it has two mainspring barrels. One of them is purely dedicated to the “animation” of the hands as they move around when the time changes. Power reserve is about 45 hours. 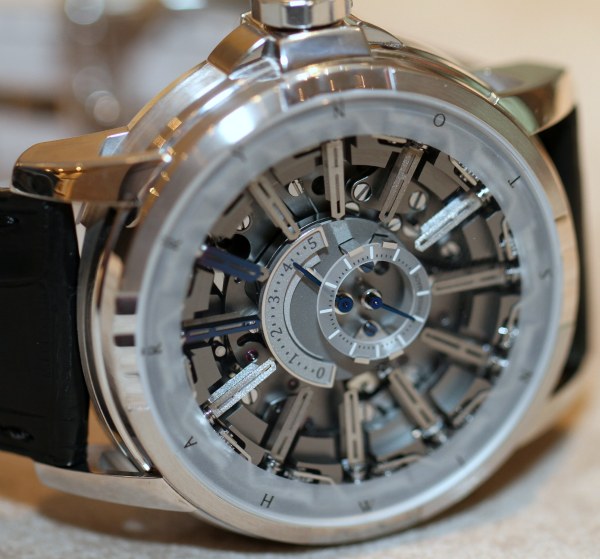 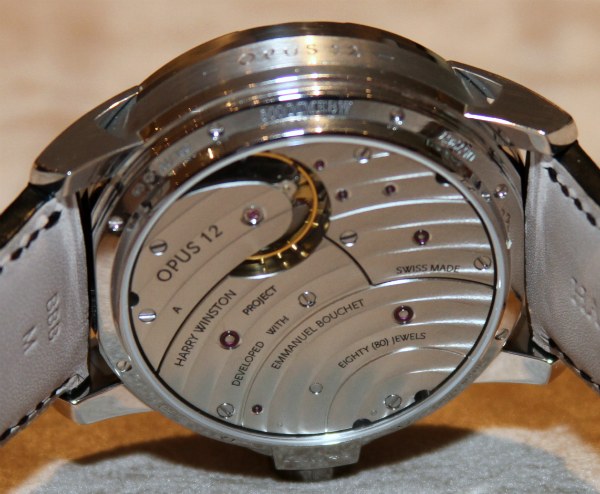 The Harry Winston Opus 12 case is 46mm wide with a smooth technical look that some will love and others might find a bit staid given how wild Opus watches have been in the past. All the details are satisfying, but you just don’t see too many round Opus pieces these days. I would suggest that it likely grows on you at the least.

Harry Winston will offer the Opus 12 in 18k white gold. The middle section of the case is said to be made from Harry Winston’s proprietary Zalium metal – a zirconium alloy. Some other versions of the Opus 12 will have diamonds. What? It is Harry Winston we are talking about here… With 27 hands on the dial and a lot going on, this watch is sure to be someone’s prized possession. I have to admit that it is very cool to use and I like that each new Opus watch from Harry Winston is not only interesting, but also unpredictable.

The Harry Winston Opus 12 will come as a limited edition of 120 pieces in each version. The price for this model is about $260,000. 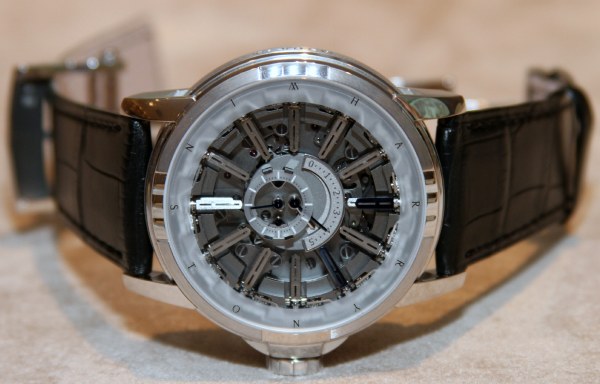 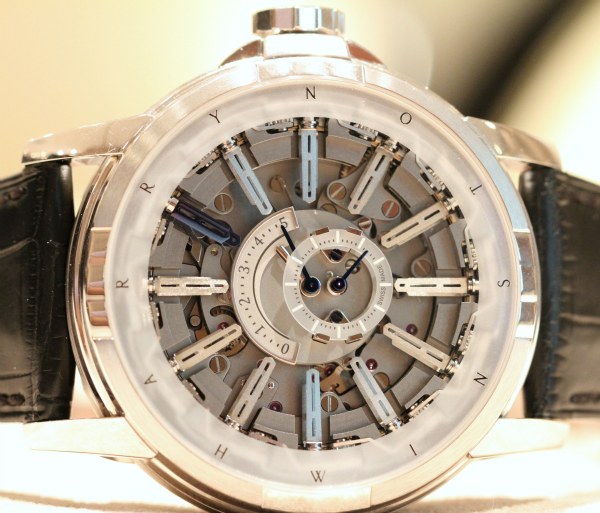