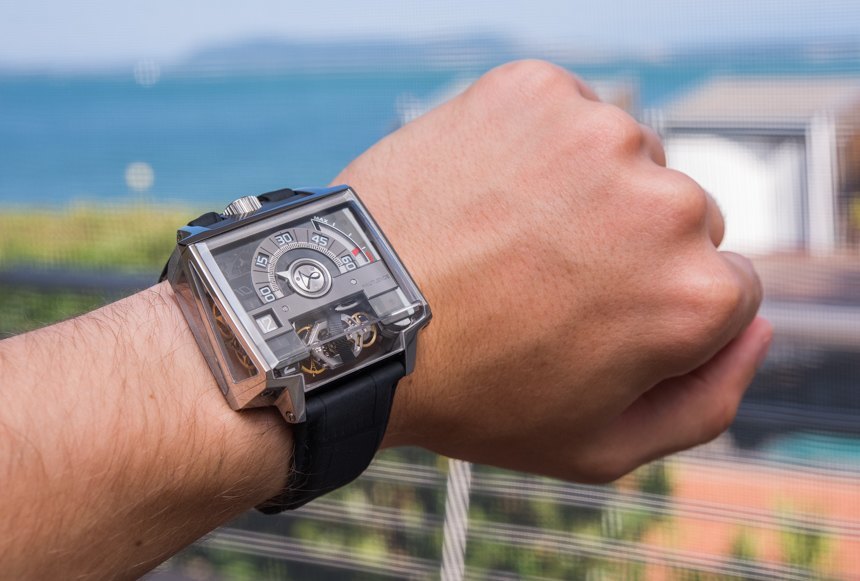 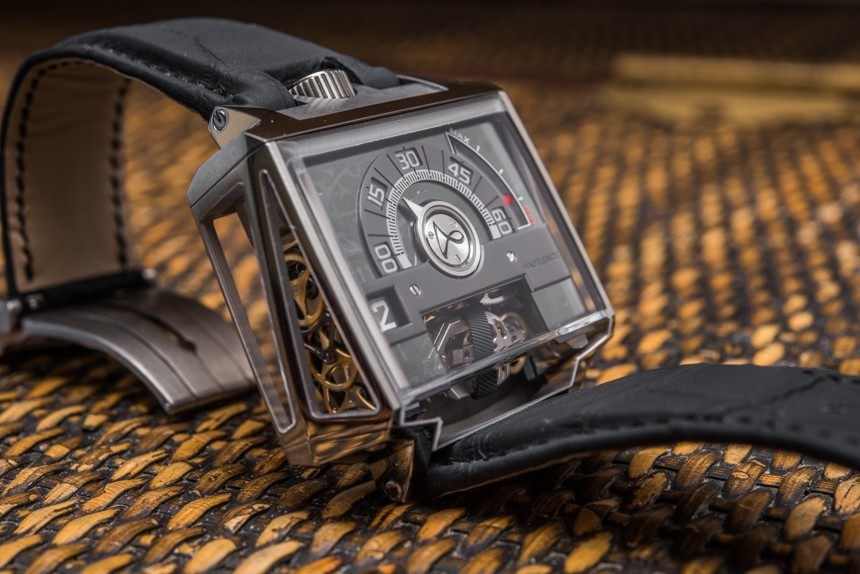 Last time we covered Swiss contemporary high-end watch brand Hautlence was in December 2014, when we went hands-on with their HL2.1 and HL2.5 watches (read all about them here). The all-new Hautlence Vortex watch takes the cool concept of tank tread style hour indicators, hourly rotated escapement, and a retrograde minute hand, and places it into a new environment, through a cleverly redesigned case. Since we were in Switzerland on the day of the release, we had the chance to go hands-on with this bold new piece. So let’s take a closer look at how it works exactly, and how the Vortex takes to a new level a lot of what made Hautlence stand out before. 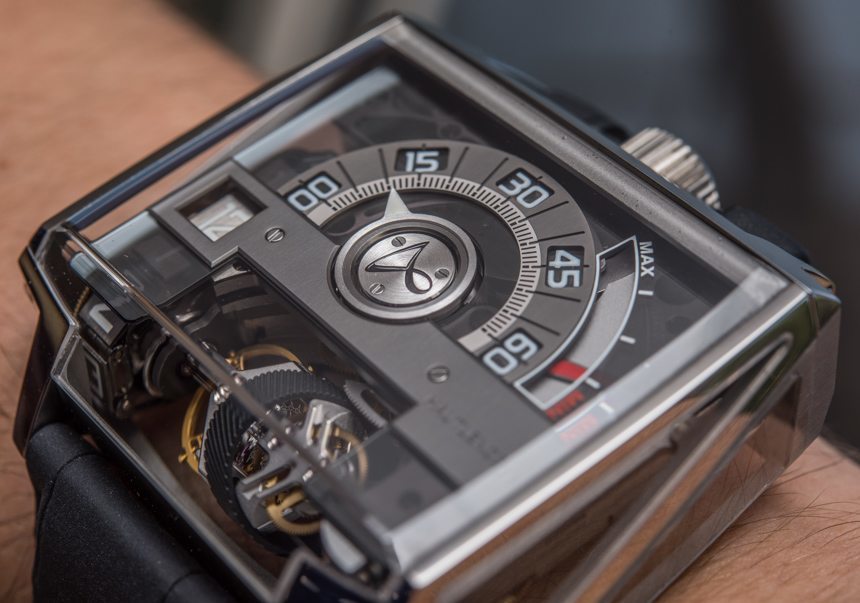 A quick look at the "dance" of the Hautlence Vortex. For a complete explanation of what you saw here and how this unusual system works check out our @abtw_david's hands-on article now, on ablogtowatch.com. #ablogtowatch #watchnerd #watchmaking #watchporn #horology #instawatch #womw #hautlence #vortex #swisswatches

“A whirling mass of fluid or air, especially a whirlpool or whirlwind” – that is the meaning of vortex, and it clearly refers to the unusual way the escapement and hour indications function. As noted above, what you have here (and can see in the image above), is a chain that comprises 12 square pieces of metal, each carrying a numeral to indicate the hours. These squares create what could best be described as a tank tread style of chain, that “jumps” or rather moves once every hour. To the left hand side of the dial, you see an aperture through which the little square that indicates the actual number is revealed. 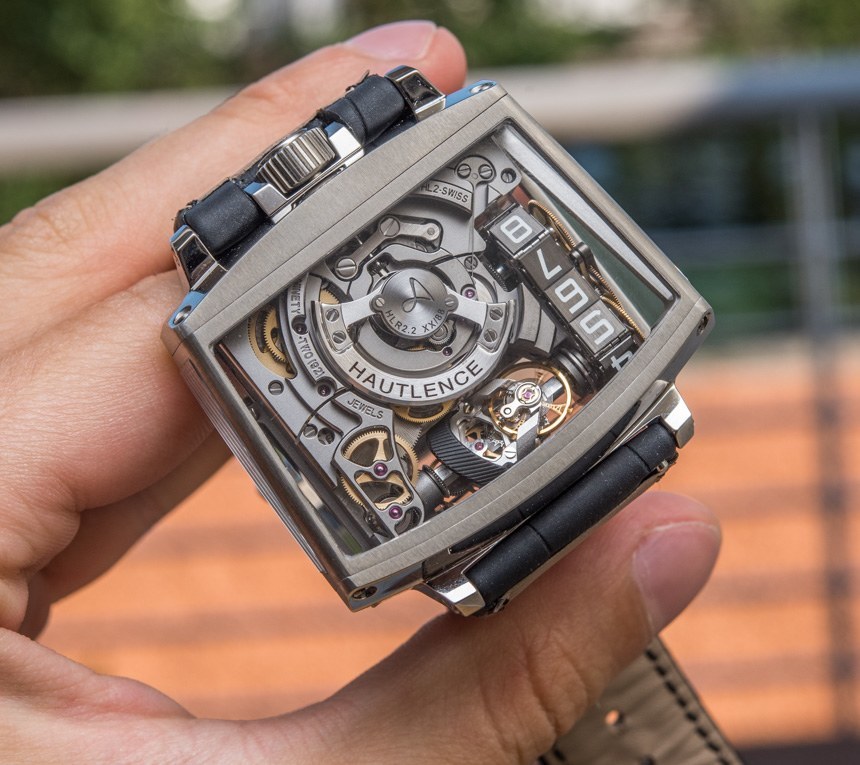 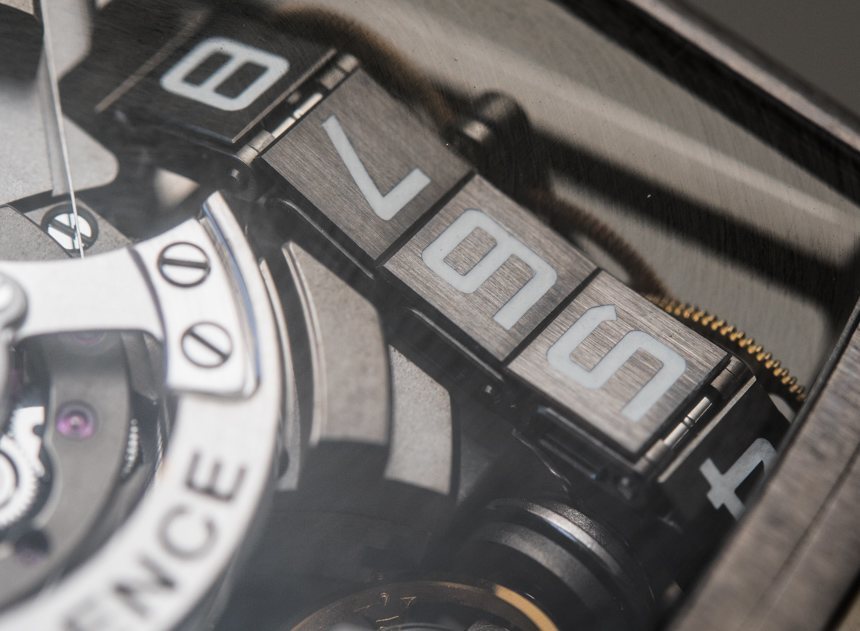 As opposed to slowly dragging the hour discs (and making reading the time more difficult), the 552-component movement gathers some of its energy throughout the hour and releases it right at the end, only to pull the tread by one increment. At the same time, something cool happens: as the tread moves, the escapement is also rotated by 60 degrees. Sure, this hourly change in the orientation of the escapement does not have the same visual or practical effect as a tourbillon that, with its constant rotation, repositions the regulating organ all the time. Instead, the Hautlence Vortex “celebrates” the passing of every hour – you just have to develop the habit of looking at your watch at the right time to witness this little, few-seconds-long dance of the hour track and the escapement. 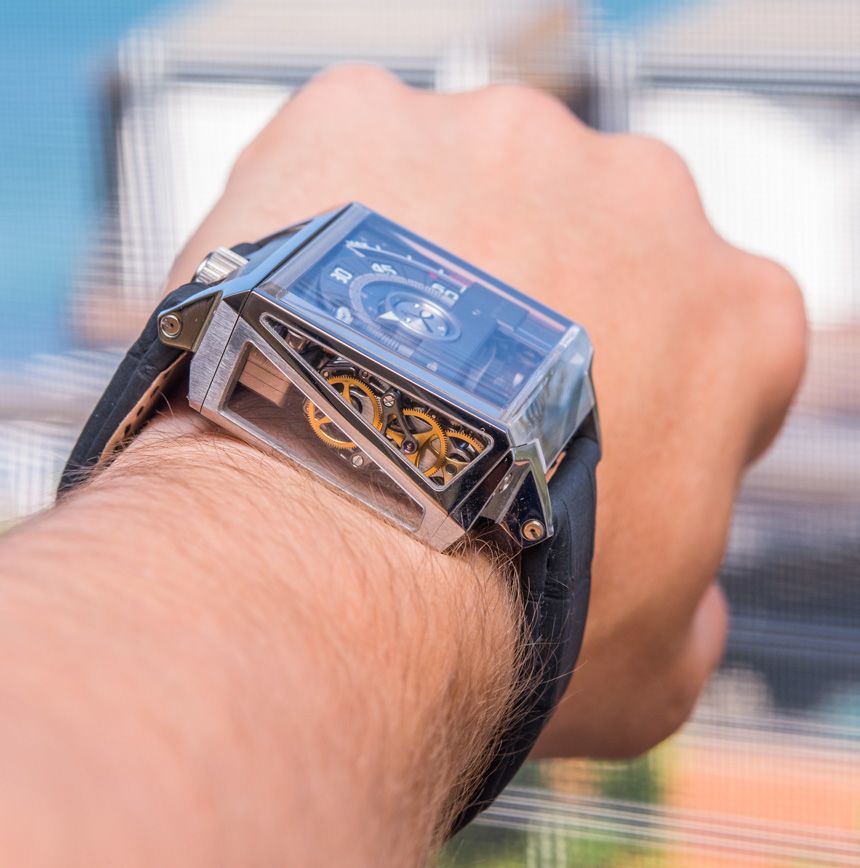 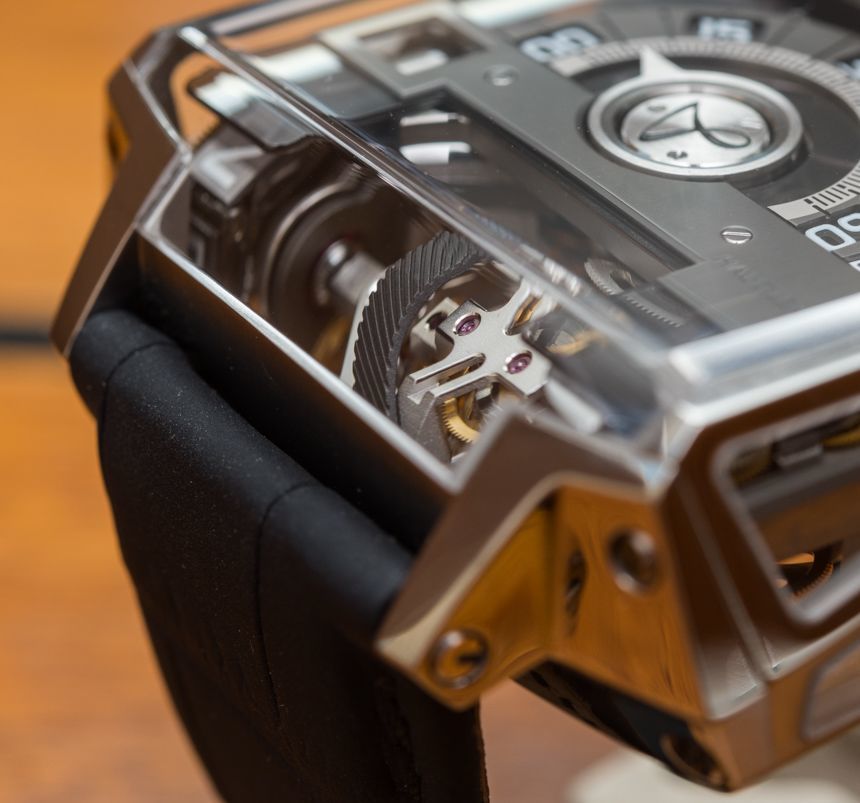 While the angular front shows the escapement and the highly unusual bevel gear around which it is rotated once every hour, an even more interesting angle is seen from the left hand side of the case: here, through two sapphire windows, a set of wheels are revealed, in an arrangement that looks unlike pretty much anything else usually seen in other watch movements. These wheels are the accelerator wheels for the mechanism that spins the hour track and the escapement. 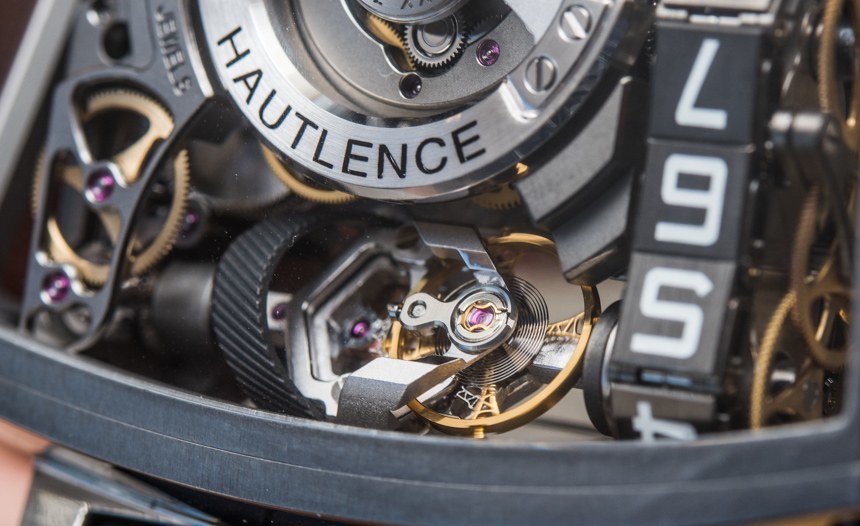 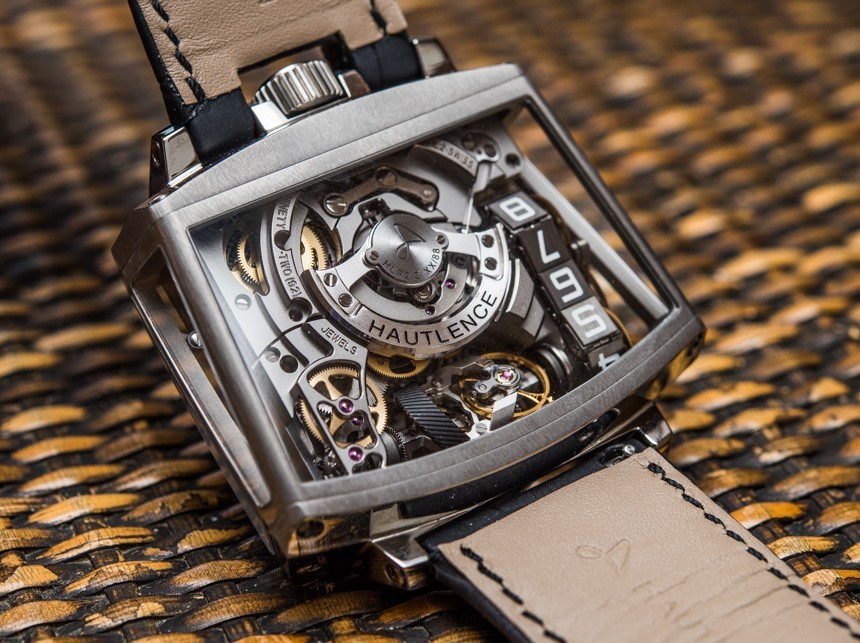 The movement actually has two mainsprings, one to power the basic timekeeping function, and a secondary one to allow for the animation to happen at every hour. As the movement releases the energy to move the track and rotate the escapement, that energy has to be transferred through some wheels, geared to accelerate the motion and create the “dance” that we see at the end of every hour. The wheels that are responsible for this acceleration are the ones you see on the left side of the case. Last but not least, in a more central position in the center of the minutes dial, in fact, is the Hautlence logo, sitting on top of the so-called governor, a little device that is also used in minute repeaters. The governor, as its name implies, is there to make sure that the energy used to move the hour track and the escapement is distributed evenly, not damaging the mechanism. It spins very fast, and works as a great addition to the dial that is already very much alive. 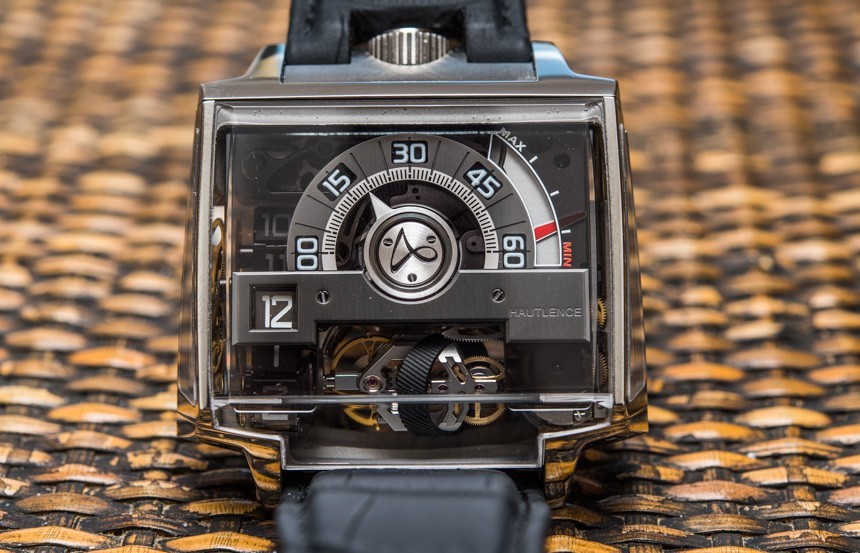 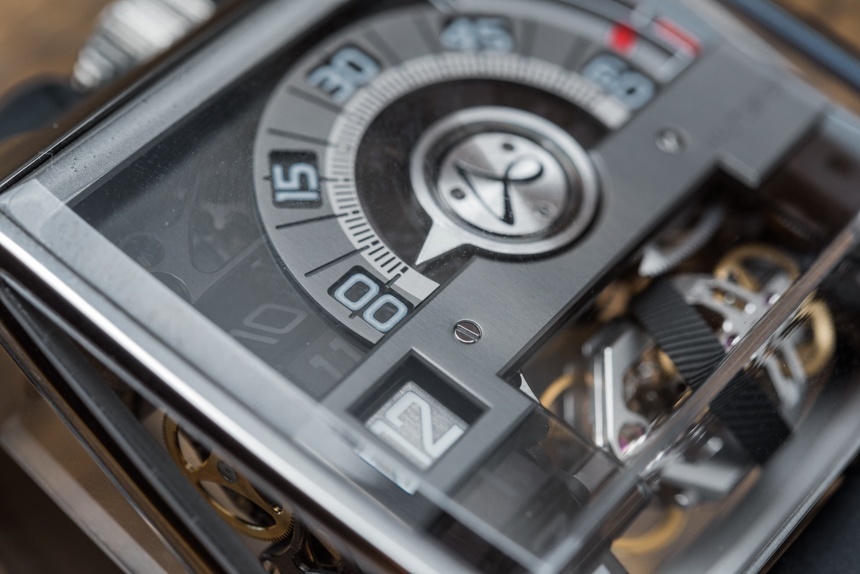 Beyond all this autonomy and even distribution of energy, the funny thing about such concepts, actually, is that most manufactures and designers know that concept watches like the Hautlence Vortex will spend less time on the wrist telling time and more off it, being passed around dinner tables, with everyone fiddling with the movement, in this case, spinning through the hours to see how the escapement and the hour track rushes to a new position. The large and highly legible retrograde minutes indicator prominently placed in the center of the dial remains almost unnoticeable at first, with all of these mechanical animations happening at once. 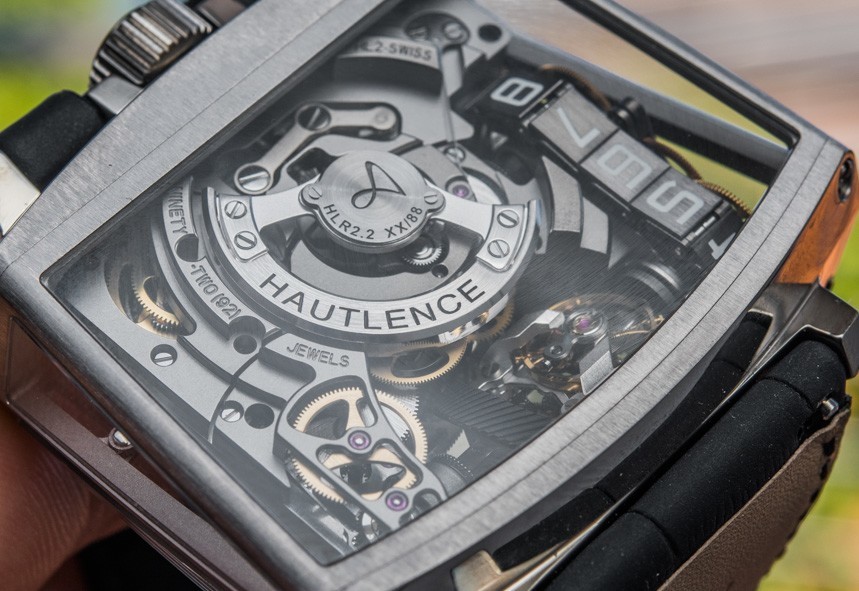 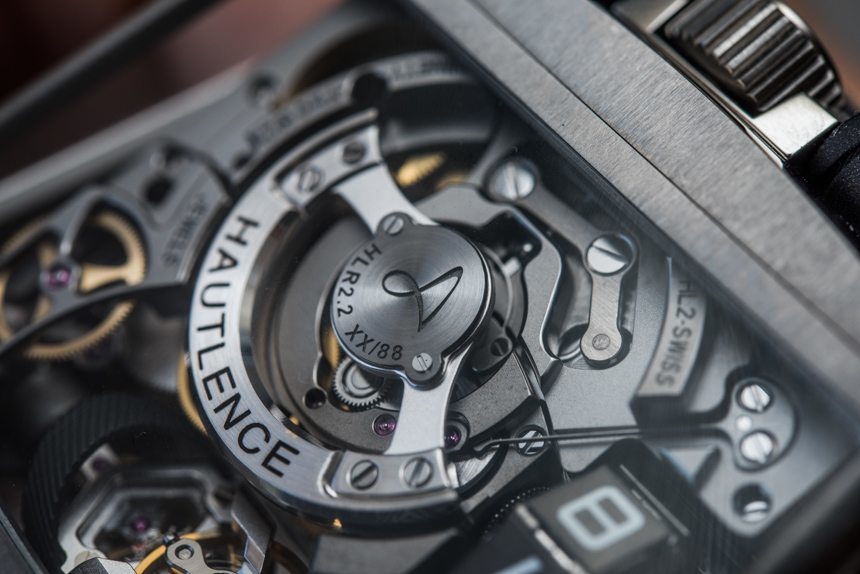 The movement is equipped with a white gold micro-rotor (not so micro, actually, as it is rather large in its diameter), and has a power reserve of 40 hours. That means that you either have to wind the watch every night (or morning), or have it on a winder when not wearing it. While I wish all new watches offered at least 3 to 3.5 days of power reserve, sometimes, especially with incredibly complicated calibers like the HL2 found in the Hautlence Vortex, that is just not possible. The reason for that is that space is extremely limited, and there simply is not enough of it to allow for one larger or more than one smaller mainspring barrels. 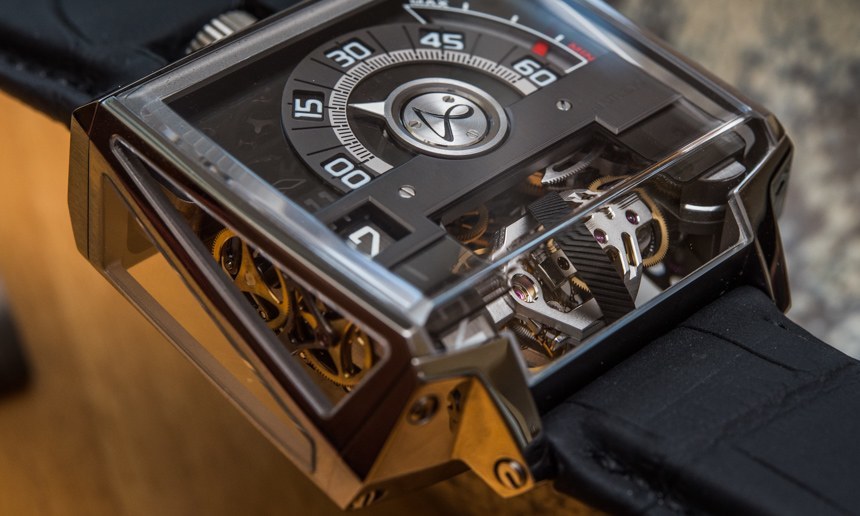 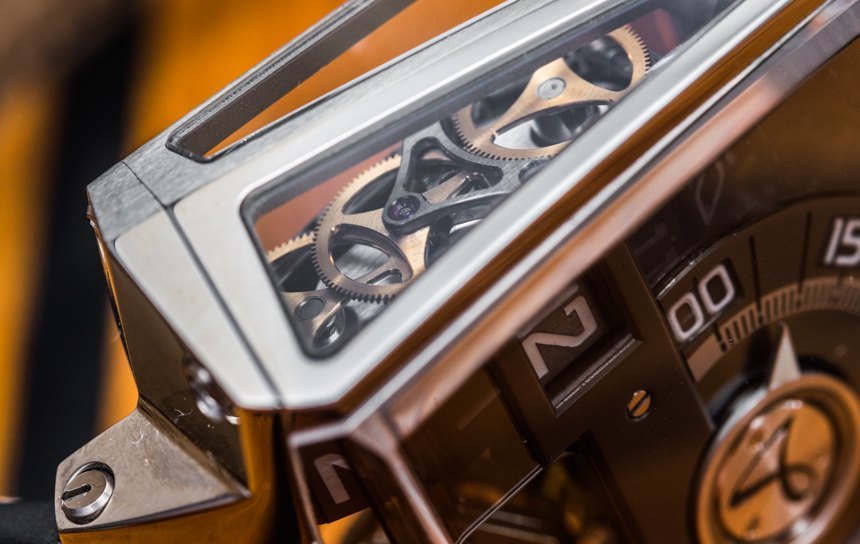 Hautlence collaborated with the Parisian design studio BBDC – Berra Blanquer Design Consultants – to create the highly complex, contemporary architecture inspired case of the Hautlence Vortex. As Hautlence explains, BBDC is active in many industries and is renowned for having brought to life several bestselling watch designs since its foundation in 1996 – most of the time, brands prefer to take credit for such collaborations, and it is refreshing to see Hautlence credit the designers behind their new release. 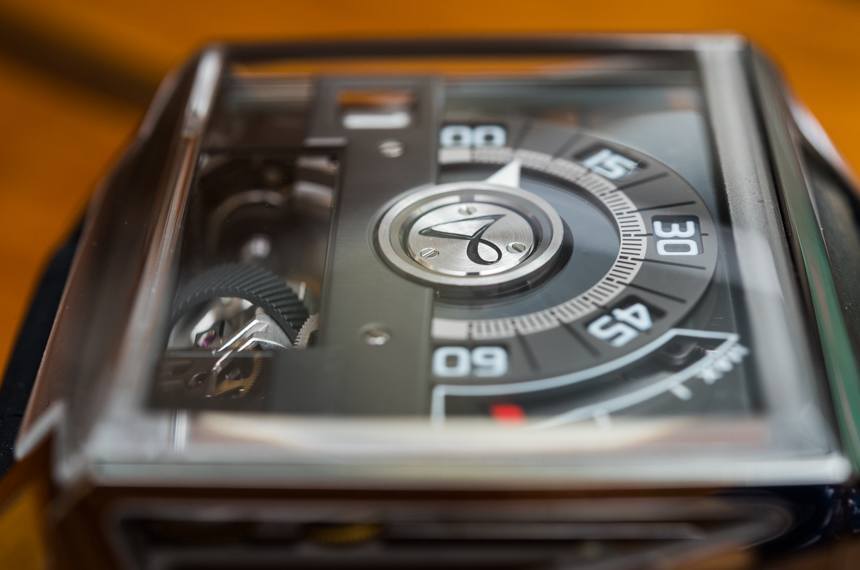 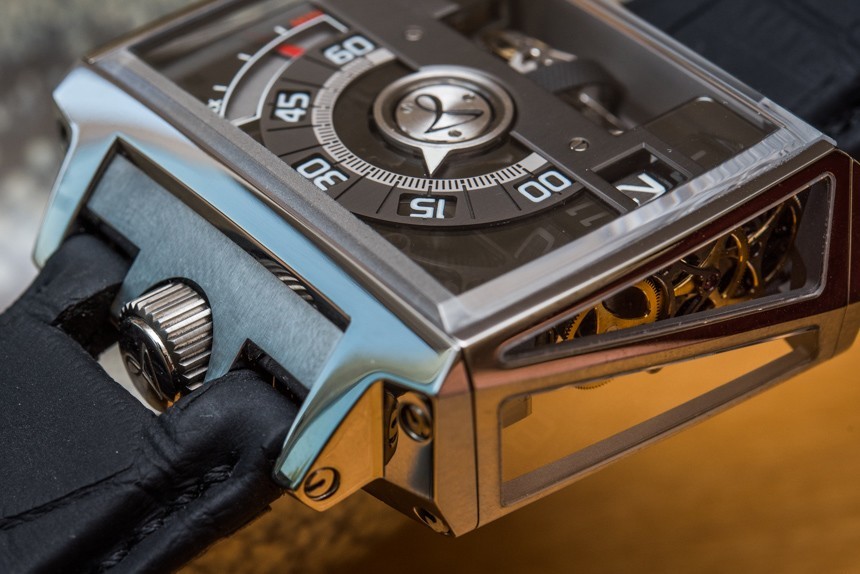 The case is rather blocky, but actually a major step forward in terms of wearability when compared to the HL2.x series. Those previous models also had a rectangular case, but one that was taller than it was wide to fit the large and complicated movement. The problem this created was that those with smaller wrists had the case extend beyond the edges of their wrist, and that does not only look unpleasant, but is also uncomfortable as the watch does not fit securely. The Hautlence Vortex works a lot better for those with smaller wrists, not only because of its short lugs, but also because of its 52 x 50 x 17.8mm dimensions. 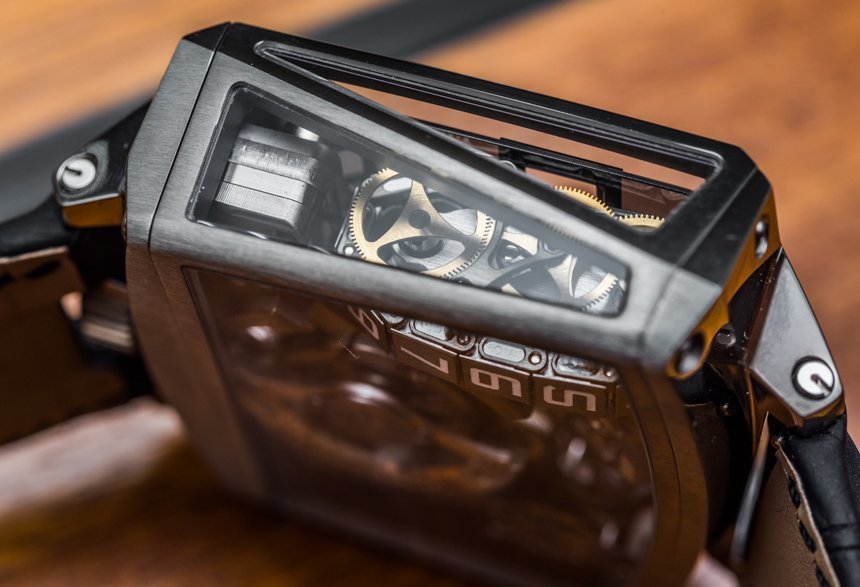 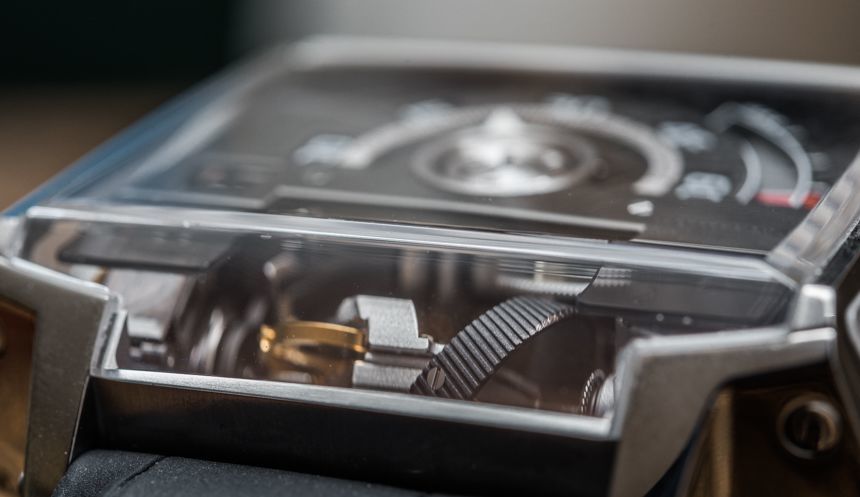 BBDC designed the case in a way that the movement and all its details are completely visible – my favorite part has to be the front crystal that is angled at around 80 degrees and covers the front and the top of the case. It is very much reminiscent of the crystal that we saw in the HL2.x models, but appears to have a sharper angle. Speaking of which, angular elements dominate the design, from the shape of the windows on the case through the lugs all the way to the dial design – although the latter is easier on the eye thanks to the large arch and semi-circle created for the retrograde hours.

As I learned in a discussion with Guillaume Tetu, founder and CEO of Hautlence, the design of the titanium case was inspired by architecture – and while we have heard that before, the Hautlence Vortex is one of those rare occasions where this association actually works. The large sapphire crystals set into the five sides of the case help make this chunky and angular case look more airy, saving it from looking like a block of steel on the wrist. 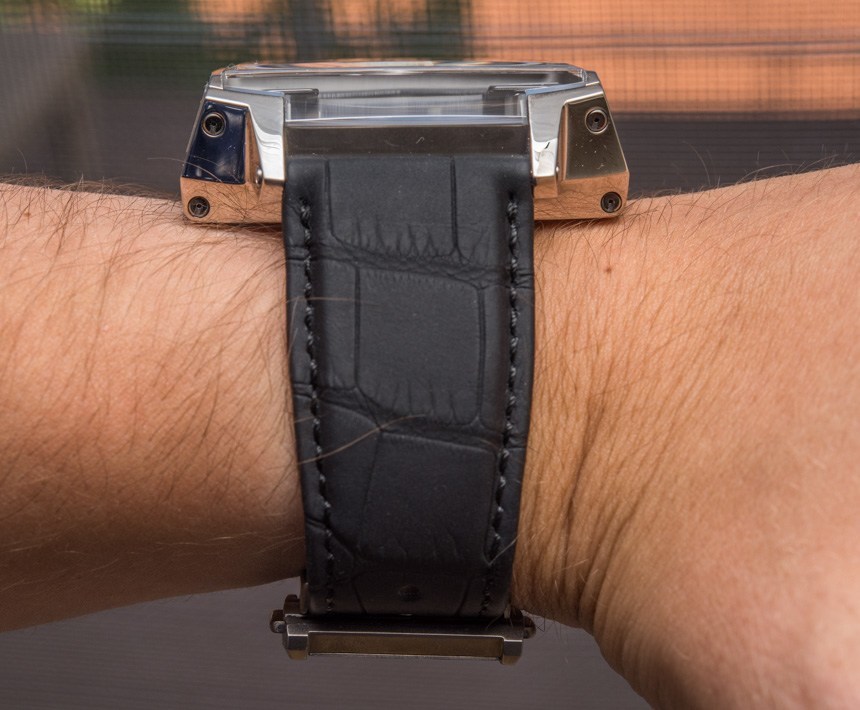 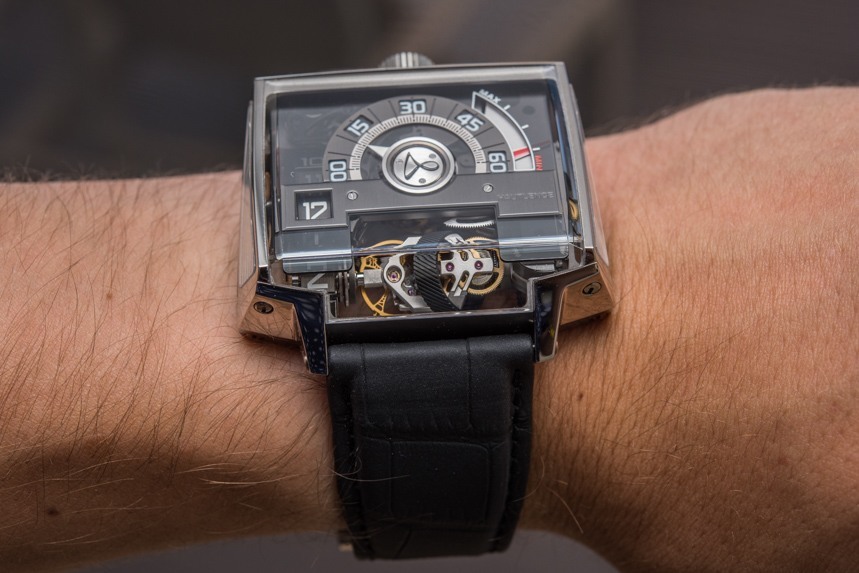 On the wrist, seen here with the rubberized alligator strap (one out of the three the watch is shipped with, namely, a black hornback alligator leather strap with red stitching, a black rubberized alligator leather strap, and a black rubber strap), the Hautlence Vortex is actually very comfortable, thanks to the aforementioned design changes. It just sits better on the wrist than its predecessors, and while long, flared lugs look great (and arguably more elegant), these short ones do result in a better fit on smaller wrists, as the straps can go straight down, almost vertically, allowing for a tighter fit and no gaps between the lugs and the wrist. 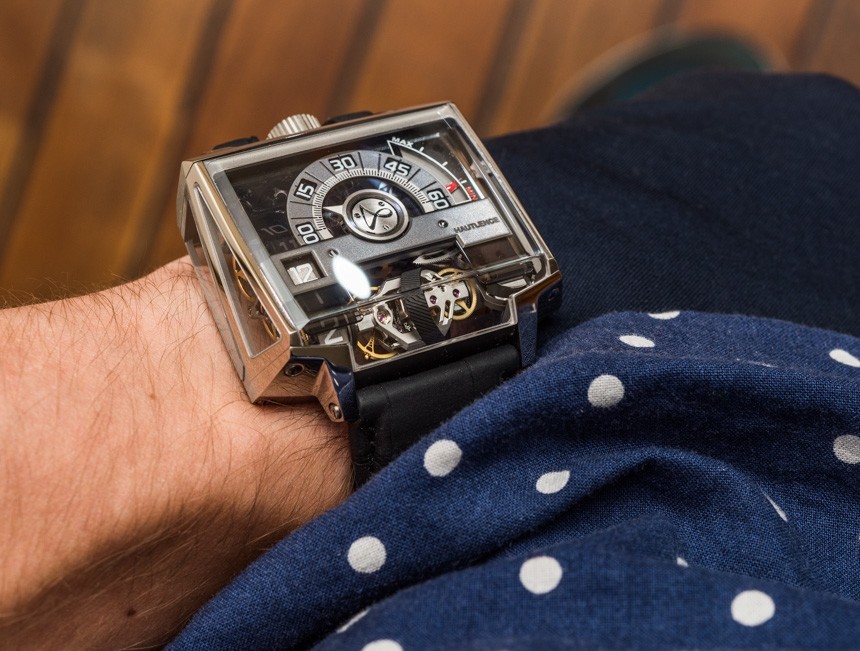 In essence, the Hautlence Vortex is in many ways a respectable – and still very interesting and entertaining – evolution from the HL2.x series. The new case in titanium looks fantastic, the view it provides into the movement from all these different angles makes the complex caliber easier to appreciate, and the dance of the hour track, escapement, retrograde minute hand and the governor all make for a cool show – exactly what one would expect from such a piece. The price of the Hautlence Vortex is 160,000 CHF including VAT, or about $169,000 USD. hautlence.com